Explore the Elder Wing with a curator’s eye

In our latest One Small Step guide to better living in South Australia, curators at the AGSA offer a bespoke tour of treasured Aboriginal artworks in the gallery’s grand Elder Wing of Australian Art.

[Scroll down for a floorplan of the Elder Wing]

Welcome to the Elder Wing of Australian Art. This forest of larrakitj in Gallery One comprises numerous individual works created by Yolŋu artists from north-east Arnhem Land in the Northern Territory. Each larrakitj is made from a stringybark tree (Eucalyptus tetrodonta) naturally hollowed by termites.

The installation acknowledges the past purpose of larrakitj as bone ossuaries, which were erected on Country as memorials during the final stages of the Yolŋu mortuary ritual. Today larrakitj are created as part of a wider artistic expression, communicating cultural connections and relationships between people and specific places on Country.

A number of the larrakitj here were created by Gulumbu Yunupiŋu, whose works celebrate Gan’yu (the stars) in the Milky Way but, more broadly, Garak (the universe). Yunupiŋu reminds us through her works that we are all from the stars, looking at the same sky and therefore universally connected. As a painter, printmaker, weaver, educator and Yolŋu community leader, she pointed out the universality of life through her engagement with the astral realm.

Several other larrakitj in this gallery are the work of Nawurapu Wunuŋmurra, who has painted triangular shapes and Waŋupini clouds. These clouds signal the arrival of the monsoon season and the north-west trade winds that traditionally brought fishermen to northern Australia from Makassar, in southern Sulawesi in what is today Indonesia. The triangular forms in Wunuŋmurra’s larrakitj portray the sails of the wooden sailing vessels (perahu/prau) that travelled to collect trepang, also known as sea cucumbers or bêche-de-mer. Yolŋu people maintained cultural exchange with the Makassans from possibly as early as the 12th century, pre-dating European exchange and arrival in Australia by centuries.

In Gallery Two there is a bark painting titled Mitjunga, Malay Prau, which was made more than half a century before the larrakitj in Gallery One.

Painted in 1948 by Minimini Mamarika, an Anindilyakwa artist from Groote Eylandt, it depicts a Makassan sailing vessel and its crew of fishermen. The painting is on stringybark, the same eucalypt used for the nearby larrakitj. The bark is harvested in the wet season and, once flattened and dried, is painted with natural earth pigments.

Mamarika’s painting was collected by Charles Mountford, an amateur ethnologist, filmmaker and lecturer, who in 1948 led a group of 16 members of the American–Australian Scientific Expedition to Arnhem Land to observe the life of Aboriginal people in order to learn how they managed their environment and to collect cultural material from them.

Mountford collected a total of about 500 paintings on bark, many of which were later distributed among Australia’s six state art galleries.

Near Mamarika’s Mitjunga, Malay Prau is an object that is thoroughly at home. This Kaurna shield is a mulubakka, one of two types of shield from the Adelaide Plains, home of the Kaurna people, and is made from the inner bark of a eucalypt.

Very few shields survive today in Australia, especially those made by Kaurna people and dating from the early contact period. The impact of colonisation saw objects such as shields stolen, destroyed or sent to international collections.

Only six examples of mulubakka shield are known to exist from the 19th century.

In conversation with the Kaurna shield in Gallery Two are two woven baskets made from the spiny-headed sedge (Cyperus gymnocaulos) that grows along the Coorong and Murray River in Ngarrindjeri country. One has been made by Ngarrindjeri artist Yvonne Koolmatrie and the other by fellow Ngarrindjeri artist Ellen Trevorrow.

Koolmatrie has said: “Weaving is linked to the river and its health – when the river suffers, the sedge grass is harder to find; when it flourishes, so do the rushes. The river, the Coorong, the sea and the lake are the four waters of the Ngarrindjeri and are all connected. Weaving is vital to Ngarrindjeri culture, it sustains us.”

A powerful spirit amid a Surrealist display

In Gallery Five of the Elder Wing, Aboriginal art is exhibited in the company of art from across Oceania. The display (see image at top) is based loosely on a display wall in Surrealist André Breton’s Paris studio in the mid-20th century but is filtered through the art and experience of Adelaide-based Surrealist Dušan Marek, who was inspired by Breton’s Surrealism.

Alongside Marek’s own work, including animations, paintings and puppets, is a bark painting by Yirawala. Painted by the Kuninjku artist in the early 1970s, it depicts the powerful spirit being Lumahlumah.

An important figure in Kuninjku cosmology, Lumahlumah is known for his gigantic form and his magic power bags, dilly bags containing sacred objects. His travels across Country are often made in the company of the Ngalyod or Rainbow Serpent.

Wandjina in a looming wet season

Also present on the eastern wall of Gallery Five is a bark painting by Charlie Numbulmoore. As a senior Ngarinyin man, he held responsibility for maintaining rock art in his Country, in the north-west Kimberley in Western Australia.

This painting shows the wandjina spirit beings associated with the onset of wet season rains and found frequently depicted in rock paintings.

Late in his life, from the mid-1960s onwards, Numbulmoore began to paint on transportable mediums, such as bark or board. His Wandjina features large round eyes, a pearl-shell pendant associated with rainmaking and a “halo” that represents cloud and lightning, conveying both spiritual power and the enveloping power of a looming wet season storm.

The AGSA is open from 10am-5pm daily and entry to the Elder Wing of Australian Art is free. 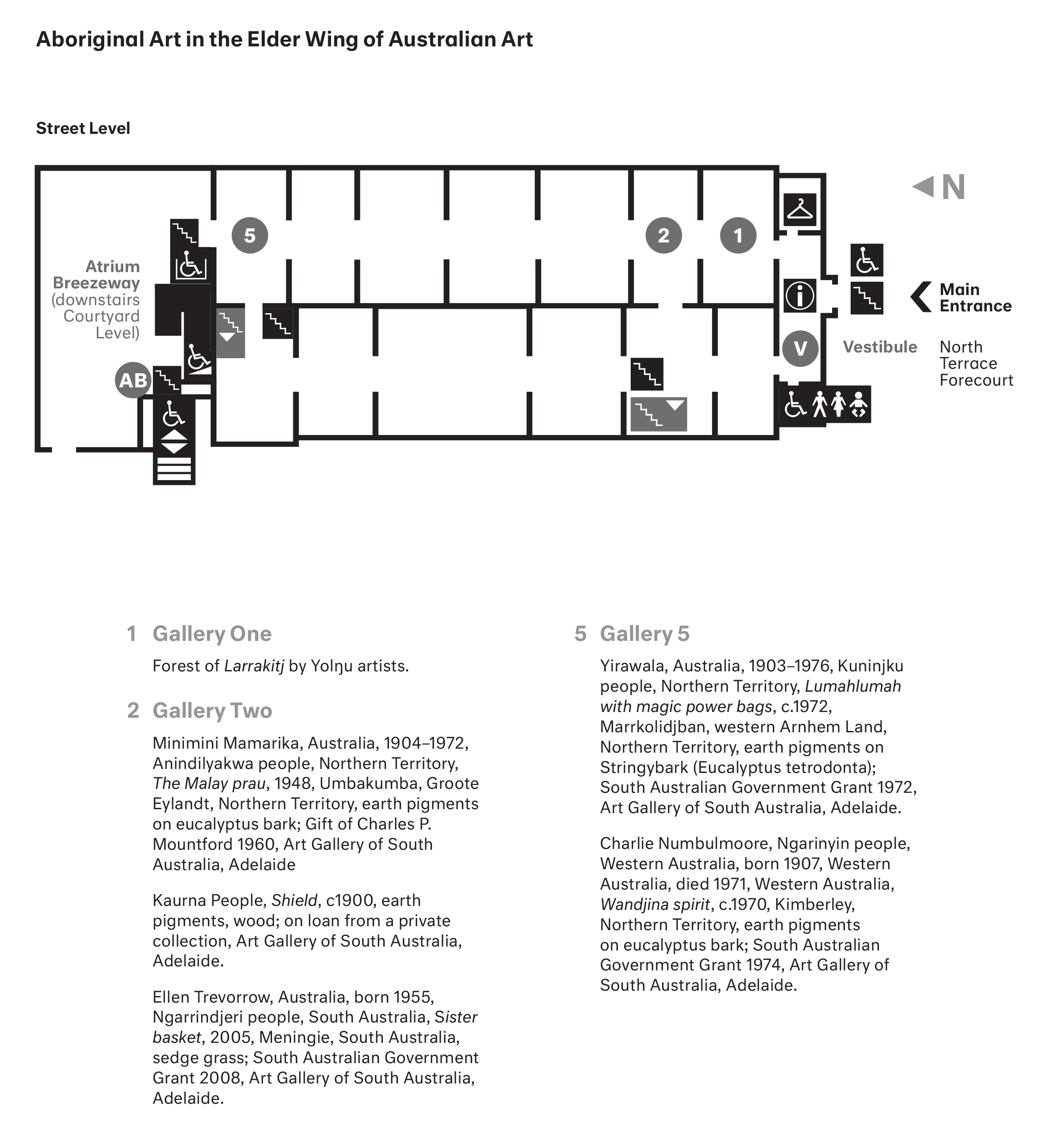 One Small Step is our new guide to better living in South Australia.

Read the other stories in our series here.

FEATURE LISTING: ‘This house is like a beautiful woman’

Amanda and Salvatore Pepe are selling their stunning art deco home, which has been the perfect setting for family life for these passionate cooks and entertainers.