Wildflower meadows are erupting in the public spaces of cities around the world. One local council has found stunning success in what is thought to be the state’s first neighbourhood flowerbed of its kind. 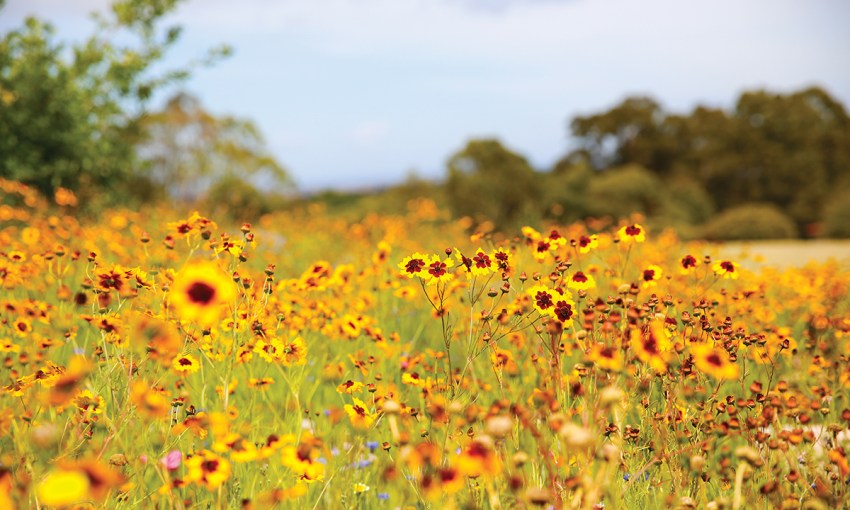 The garden is popular with locals, who are drawn by the sea of yellow Coreopsis tinctori.

“The tragedy of our time has been happening all around us, barely noticeable from day to day – the loss of our planet’s wild places; its biodiversity,” says Sir David Attenborough in his documentary A Life on Our Planet. In the film, the world’s most famous ecologist desperately argues that to save earth and ourselves we must “rewild the world”.

You only have to take a quick look around to realise it is rare to find true wilderness amongst our suburbs and cities; providing for native creatures, insects and birds has generally not been front of mind.

UniSA reports that new housing subdivisions, smaller yards and a dependence on air conditioning have resulted in a 30 per cent decline in Australian residential trees in the past decade, leading to hotter neighbourhoods, increased energy costs and declining bird populations.

However, in Adelaide’s south, horticulturists are working to bring a taste of the wild back into local parks and reserves.

Onkaparinga Council’s Matt Briggs and James Dott began to investigate wildflower meadows after learning about work done at Sydney Botanic Gardens and also the City of Melbourne. Particularly popular in Europe, these meadows produce a flourish of vibrant flowers during summer and are a more sustainable, cooler and vibrant alternative to turf or mulched garden beds.

After plenty of research, Matt and James oversaw the seeding of a large flowerbed at Aberfoyle Park’s Thalassa Park in the spring of 2021. In the ensuing warm months, the garden exploded with more than 40 species of flowers that have attracted many pollinating insects, lizards, birds – and local residents, too.

James and Matt are ecstatic with the results and particularly pleased that the garden is capturing the imagination of locals. “Finding places in the suburbs that feel wild is tricky and a garden like this can provide that sense of nature,” says James.

“It can be different things to different people. One person might find it relaxing and peaceful and the next person that comes along finds inspiration or creativity; it’s whatever you want it to be.

“When the staff are working here, they receive so many questions from the public and that’s what we want to see. There are thousands of flowers in there so you can pick a flower and even walk into the garden and it will spring back.

“Rather than grass mowed within an inch of its life, a wildflower meadow can create a wild aesthetic in an urban area. If you were to go into the garden, you’ll hear that it’s just humming with insects. We’re hoping that the predatory insects will protect the rest of the gardens in the park from aphids and pests, so the need for herbicide will be less.”

As the largest council in South Australia, Onkaparinga has a huge maintenance program for its reserves and parks, with more than 750 grassed sites to mow and 1100 garden beds to care for. Wildflower meadows are a promising alternative groundcover option and James and Matt are more than happy to share what they have learnt with other areas.

“In terms of horticulture, you can use it to reduce your maintenance inputs, saving money and time. Because it’s tall and dense, the garden helps reduce the heat island effect better than turf can,” says James.

Once established, the garden is mostly self-sustaining, coming into flower from the end of spring through to early autumn. The flowers will then drop their seeds and the council will cut the plants down to the ground and cover with a thin layer of pea straw. Then, it all starts up again in spring.

“In the wild they would burn every few years, so to emulate that we will slash them and they’ll respond by coming back,” says James.

James encourages anyone to have a go at growing a wildflower garden at home; they’re low maintenance and the primary consideration is keeping out the weeds. This means good preparation before seeding and then a keen eye to hand-pull broadleaf weeds, while a selective herbicide can be used for the grasses.

For this particular site at Aberfoyle Park, compost was first added before the ground was rotary-hoed so the fine roots of new plants could easily penetrate the soil. The council sourced a specific blend of 40 different wildflower seeds from Meadow Flowers Australia. While a home gardener could simply broadcast the seed by hand, Onkaparinga took a unique approach with the help of Hydroseeding Australia.

“We often use hydro-mulch for seeding turf areas so we thought we’d give it a go for the wildflower garden,” says Matt.

“It’s worked really well and it’s a point of difference to what councils are doing interstate.

“The seed and fertiliser are mixed into a tacky wood pulp and then sprayed onto the garden bed. The mix provides extra protection, holds the water well, and delivers better germination rates and therefore better success. You really want it to seed well and outcompete the weeds, which is what’s happening here.

“They’re viable and we think they’re great – they should be used wherever they can. In the past 10 to 15 years, reserves have become more native, which we love, but wildflower gardens can bring some colour back into those landscapes.”

While this garden was seeded with exotic flowers to suit a cottage style, James says the next step is to trial species that are native to Australia’s harsh and dry regions with the aim to plant them across the region.

“If you look at outback Western Australia, the wildflower displays that they have in the desert are just unbelievable and go to show that it’s possible in our dry climate,” says James.

“It just takes good species selection and preparation. We believe we can achieve it.”