The distinction between a house and a home sings from every nook of this characterful family residence.

When Kate and her husband Martin bought their Glenside property, the 1915 home had never been renovated or modernised in any way. The old world feel was a drawcard — from the charming original front door to the stained glass windows — and a vision of what could be was in their minds. The bare bones of the home provided the ideal canvas to chip away at, until it finally became a place that exudes warmth and comfort.

When the couple moved in, they cooked with a George Foreman grill because there was no kitchen, food was chilled in a bar fridge and dishes were washed in the bath. To top it all off, Kate was six weeks pregnant with her first of two sons at the time, but the couple were determined to transform the space.

“We took it on and I think most people’s jaws dropped. But it’s such an insanely beautiful area and right in the fly zone for schools and friends and family — and what’s life if you don’t have a challenge?”

It’s been a true labour of love to achieve the open and welcoming home, complete with full-sized refrigerator and working kitchen. The couple created a home for their boys to grow in, extending and adding touches over the nine years they’ve been there.

Charming flourishes found their way into the house from the outset. A collection of hooks pepper a section of the hallway, in an artistic and practical mural created by designer Felicity Baj.

Felicity’s mark has been stamped throughout the home, with Kate trusting her to pick up decorative touches on her behalf. The colour palette wasn’t difficult to ascertain; Kate’s personal look is almost exclusively black and white, and that extends to her home.

Creativity shines through in the multitudes of ways the two hues have been used throughout the home.

Though black and white — and the occasional grey — reign supreme, the space is warmed with timber floorboards and pops of neutrals, subtly making their way into each room. The design is a transformation from the original home, yet sympathetic to the period. A hallway arch framing the entry is a handsome nod to heritage, and a coat of white paint brings the timber into the current century. Martin was keen to retain the home’s fireplaces, but they weren’t all charming and attractive. Painting them black has allowed them to quietly add interest to the bedrooms.

Both of the boys’ bedrooms find the perfect balance between their inhabitant’s personality, and that of the wider home. Removable black decals on white walls give the rooms a non-committal fun twist. Just down the hallway, the study provides the same level of quirk, with black and white flamingo wallpaper.

The master bedroom is simple, functional and beautiful. The generous footprint of the room has allowed one wall to be painted black, without appearing to compromise the space. The room leads directly into the walk-in wardrobe, without doors to close it off. The en suite’s floor is a hypnotic black and white pattern that alleviates the need for any other flourishes in the room. 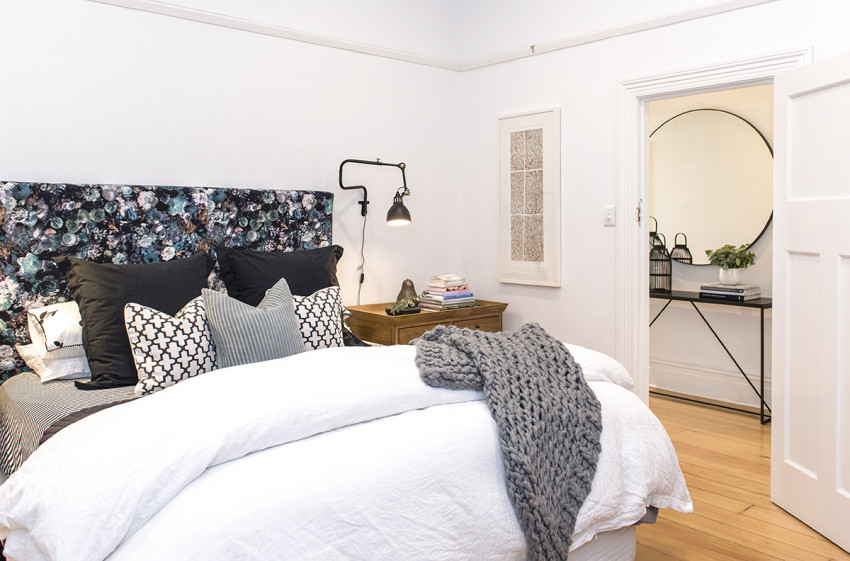 Almost all of the colour in the home is concentrated into one space, which Kate refuses to call the toy room, and is instead dubbed the sitting room. “I’ve let out every ounce of colour in here,” she says. It’s in the bright couch and the artwork by Eliza Piro, a South Australian artist. There’s clever storage for toys, but also shelving so the more attractive and sentimental pieces aren’t hidden away. “There’s just so much stuff that comes with children, so storage is something you have to think about, without putting it all behind a door.”

The original villa stopped short of the current home’s length. You walk over the original back step upon entry to the open plan living, dining and kitchen at the home’s rear, and a section was also added along the side of the property.

The floor in the new area features parquetry floorboards, rather than the parallel flooring in the existing home. “I love the old floorboards, but there’s no denying this is the new end of the house. Everyone gave me the advice that I’d have to do a really perfect match, or just own the fact that they’re different.”

The area is perfect for the family of four. Kate can be cooking in the kitchen, while her eldest is doing homework at the mini office just off to the side. There’s a tendency to conceal study nooks and keep them out of the view of visitors, but the couple has no qualms in having theirs in a prominent position. There’s no need to call out from the study with homework questions — all the family are able to be together even when they’re working on their individual tasks. “I want us to be together as a family and I really love we can have space where we’re separate, but at the same time, if we need somewhere to set up and work while the rest of the family are around, that’s ultimately where that will happen.”

As with most households, friends and family gravitate to the kitchen in this home, and there’s plenty of space for them to do so. A four-metre Caesarstone benchtop and generous line of stools allow room for everyone. There’s ample storage, which isn’t being taken up by a refrigerator — there are two in the butler’s pantry.

While many people want the luxury of closing off their pantry entirely, Kate had sliding glass doors with black frames installed. “It does make me keep the pantry in a reasonable state, but I didn’t want it to feel like the room had just stopped.” The door, is open 99 per cent of the time, the same with the door to the laundry behind the kitchen. If there’s a washing machine or dryer going, the glass sliders are a perfect means to dulling noise.

The lounge area is warm and beautifully styled but, as with the rest of the home, Kate’s not too precious about it. The sideboard in the space was one of the first pieces the couple bought for their new home and it’s now full of the memorabilia that comes with young boys. “They can feel like it’s not an adults-only area and hide their stuff in it. It does mean that I’m not tripping over dinosaurs and Lego.” There are elegant design touches in every room, but there’s no doubt a family lives here. If you look closely enough, there are dinosaur stickers in unexpected places, pressed on by small hands. But Kate wouldn’t have it any other way.

Though the couple doesn’t have a crystal ball for the future, they can’t see themselves in another house any time soon, after so much work done by their own hands. “It was just the two of us and a bump when we moved in, and now all of a sudden there are two other people walking around. I can’t imagine not living here. I didn’t have a visual image of it in many ways, but in terms of the way it feels, it feels the way I imagined.”

This story first appeared in the February 2019 issue of SALIFE.

“It’s the journey, not the bike”

One Small Step is our new weekly guide to better living in South Australia. Today, take your treadly for a leisurely guided ride around Adelaide, or leave the city to journey along one of the state’s scenic and relaxed bikeways.

Eboney Sheehan was living in Sydney, had a great job, good mates and life was on track. All that changed last year when she found a lump in her breast. Here, the 35-year-old, who works in construction in SA, talks about her battle with cancer and her passion to raise funds for “cold caps” - a method to help people undergoing chemotherapy keep their hair.

All the fun of the Fringe

Wondering what to see at the Adelaide Fringe this weekend? These first-week reviews can help you navigate the smorgasbord of shows on offer.

All the fun of the Fringe