An online auction will decide the next chapter of this remarkable mid-century entertainer at St Georges. Lovingly renovated and extended in 2017, the property features a pool, tennis court, open plan home, and a separate three-level cottage. 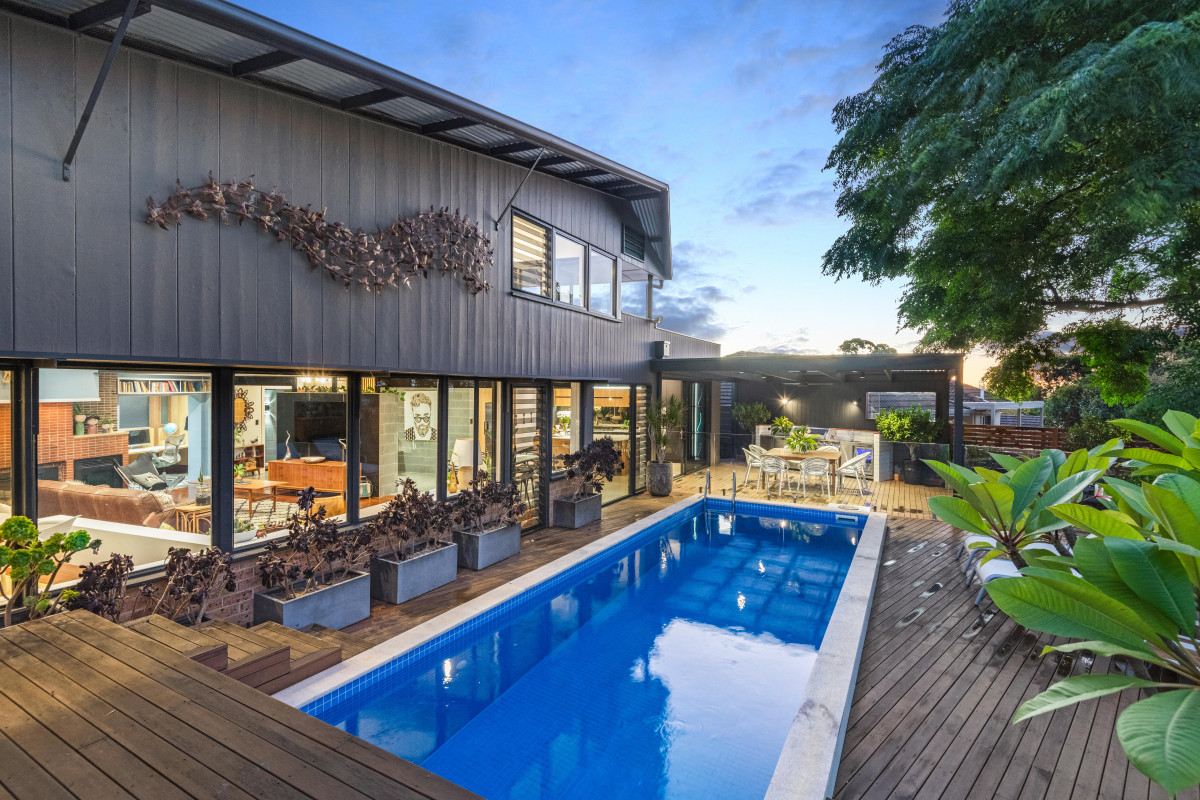 When Bec Ifould and Alex Marshall purchased their home on St Georges’s Fifeshire Avenue in 2015, the sale came with two strict conditions.

“Number one was that we wouldn’t knock the house down, and number two was that the previous owner was still allowed to come around and swim in the pool,” Bec says.

“I’ve actually been coming to the house myself for 23 years, as it was owned by Liz Higgins who is great aunty to my two daughters.”

Previous owner Liz recalls that it was a matter of heart over mind, “because we couldn’t bear the thought of it being knocked down to build three tacky boxes”.

Bec and Alex embarked on a modern extension and renovation, which was sympathetic to the home’s mid-century genetics. The original property was an architectural marvel back in the ’50s.

They completed the project in 2017 and are now selling the expansive family entertainer, with an online auction to be held on May 6.

“Selling this home is one of the hardest things I’ve ever had to do,” says Bec, who poured her time and passion into designing and project-managing the renovation. Bec currently runs her own business, Designed by B.

“It’s the most spectacular property,” she says.

“In my eyes, the house is just perfect — it’s got everything. It’s my dream home and has so much warmth and love to it.”

It will be only the second time the property has changed hands since it was built in 1949 by Adelaide lawyer and magistrate, the late Les McLean Wright — Liz’s first husband. Fascinated with the style of American architect Frank Lloyd Wright, Les had his home built in the same vein.

At least some of the original construction work, particularly the concreting of the pool, was completed on a quid pro quo basis where tradesmen worked for free as a way to pay Les, who helped them with various legal troubles.

Les also acquired the South Australian marble for the pool coping this way, with an extra piece of marble provided for a dining room table, which is still in the home today. 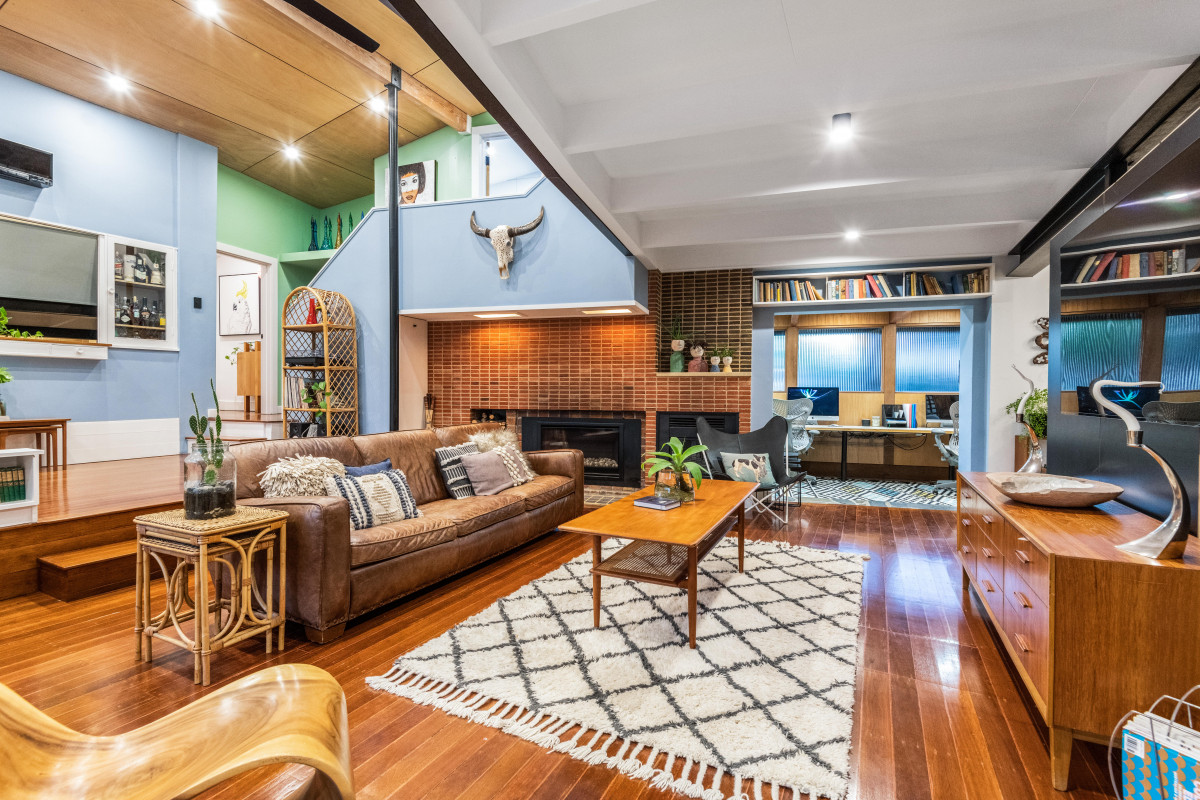 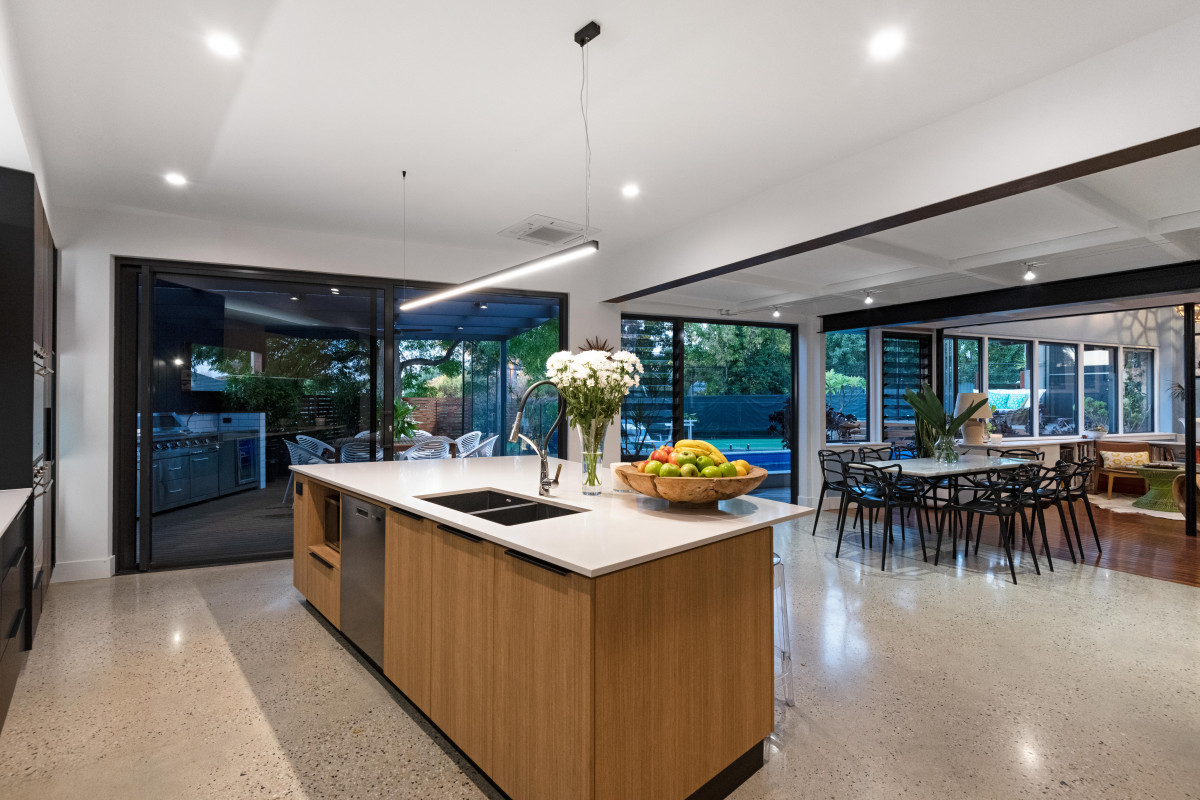 Recognised for a mid-century layout that was ahead of its time, the home garnered a four-page spread in Australian Home Beautiful magazine in 1952.

It was also the talk of the area and known as the St Georges party house. “Back in the 50s, there were only two houses in this street and there are many stories about colourful parties that were held in those days,” Bec says.

“Liz knew that I loved it, because I had been telling her for 23 years that it was the coolest house in the world. She rang me and said, ‘If you bought this would you bulldoze it, or would you extend?’”

Developers would have had other designs for the rare 1200sqm corner block, but thankfully the home has been modernised to encapsulate a slice of local history.

This huge project kept with the mid-century architecture of the original home, following on from the angles and shapes of the original house. There’s high, raked ceilings and even a triangular bathroom. “There are not many square corners left in the home,” Bec says. 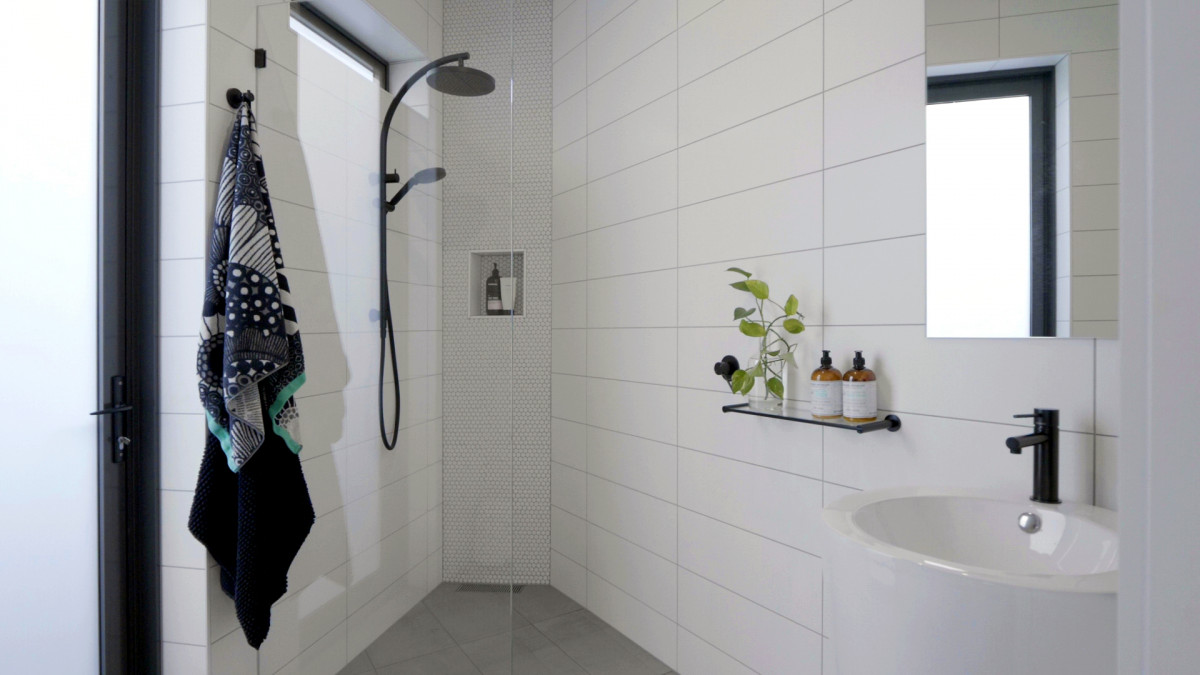 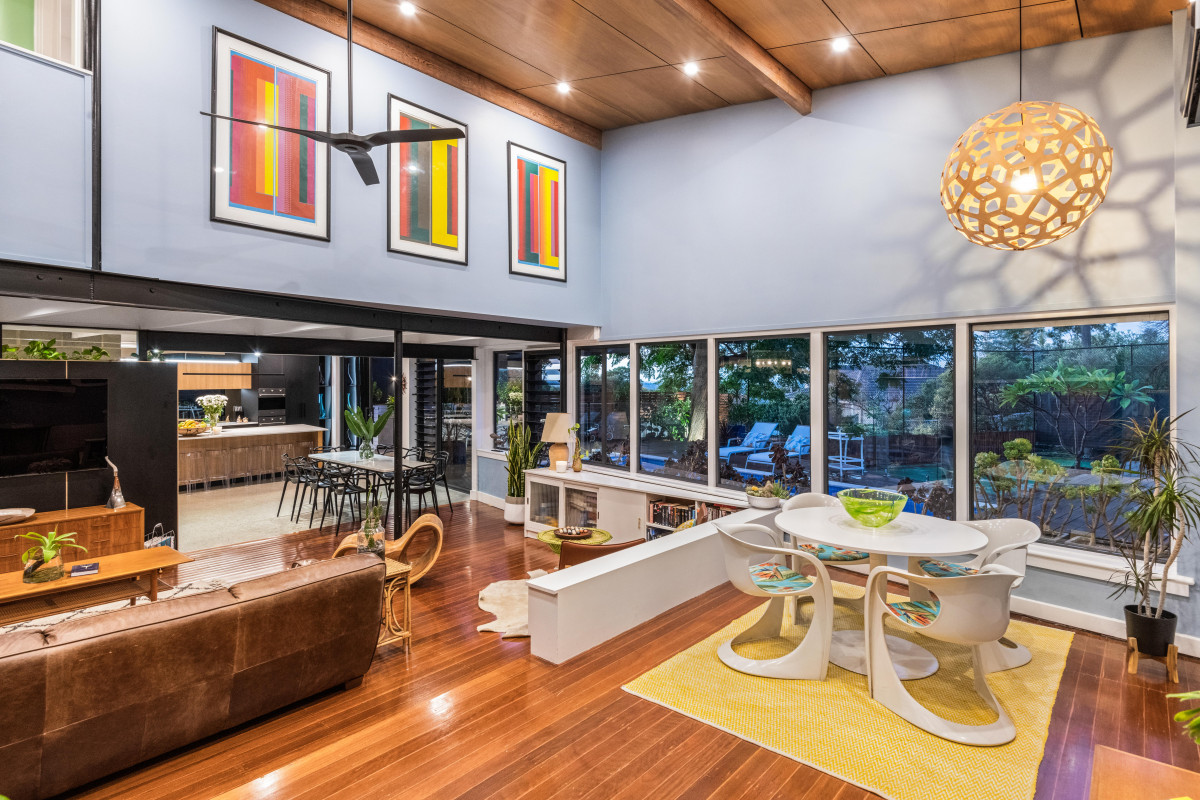 Upon entering through the Western Red Cedar front, the interior design deliveres a punch of colour and texture, with original stone walls and exposed Besser bricks providing a raw industrial vibe, enhanced by lofty ceilings.

The original polished timber flooring meets the new polished concrete in the open plan living area, where a sparkling modern kitchen wraps around to the generous and stylish pantry. No expense has been spared on the kitchen and meals space — it’s an entertainer’s dream with a double Fisher & Paykel fridge and freezer, colossal island bench and stacked Smeg ovens.

An expansive and original wine cellar completes the entertaining requirements.

The eastern extension serves as wing for children or teenagers, with complete separation from the master bedroom. This wing was specifically designed for Bec’s two teenage daughters Charlotte and Lucy, with three large bedrooms and a rumpus room with views across the pool and twinkling city lights in the evening. 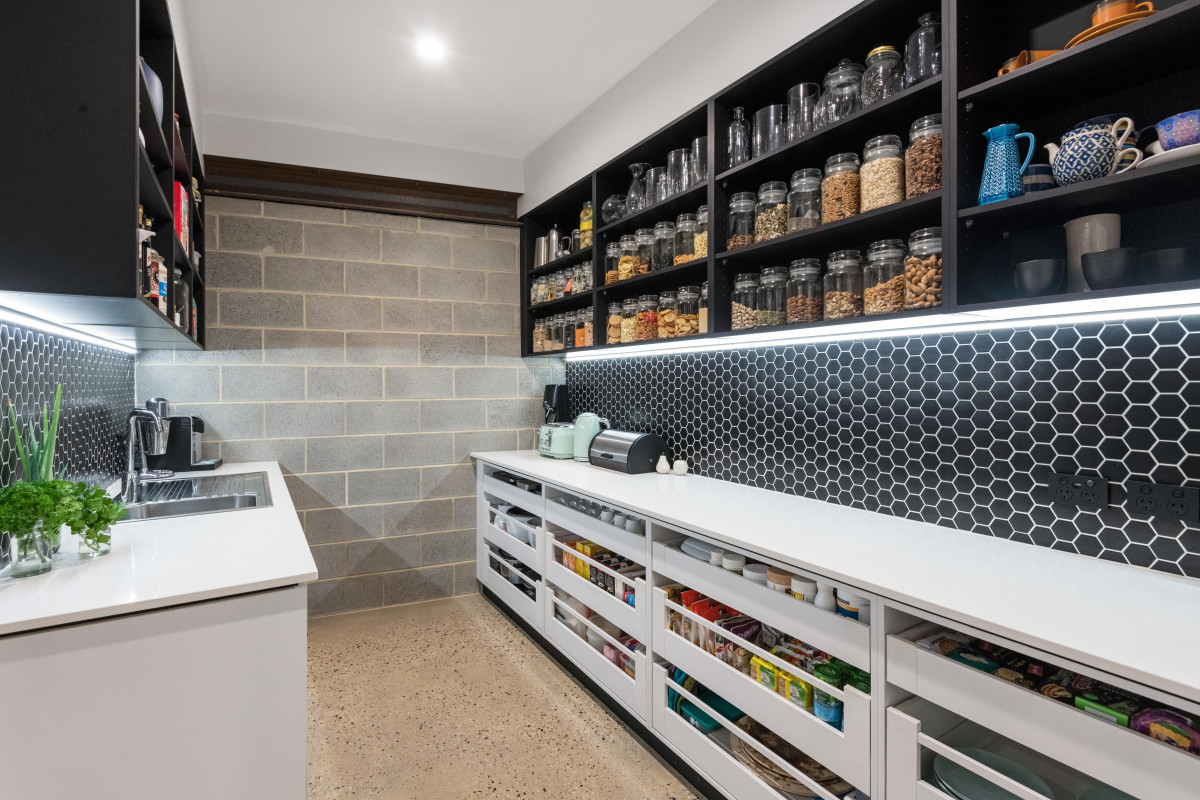 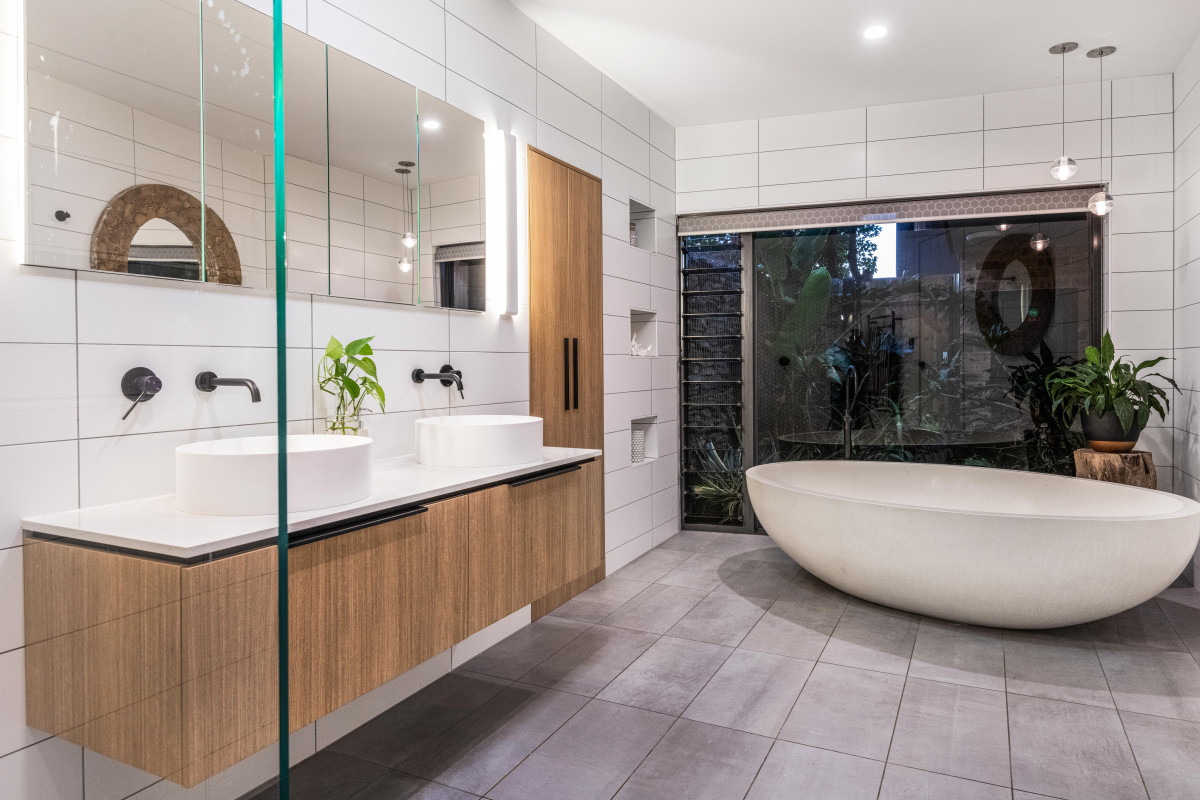 One particularly impressive feature of this wing is a huge bathroom, which is located in what was original garage. A huge picture window onto a private courtyard has been installed where the old roller door once stood. An oversized reconstituted marble freestanding bath is flooded in natural light and provides the ultimate luxury.

Today, the new garage has direct access to the butler’s pantry so occupants can unload groceries from the car and straight into the cupboards.

Outside, the swimming pool is surrounded by split-level decking in typical mid-century style, and there’s also a veggie patch tucked away around the corner. 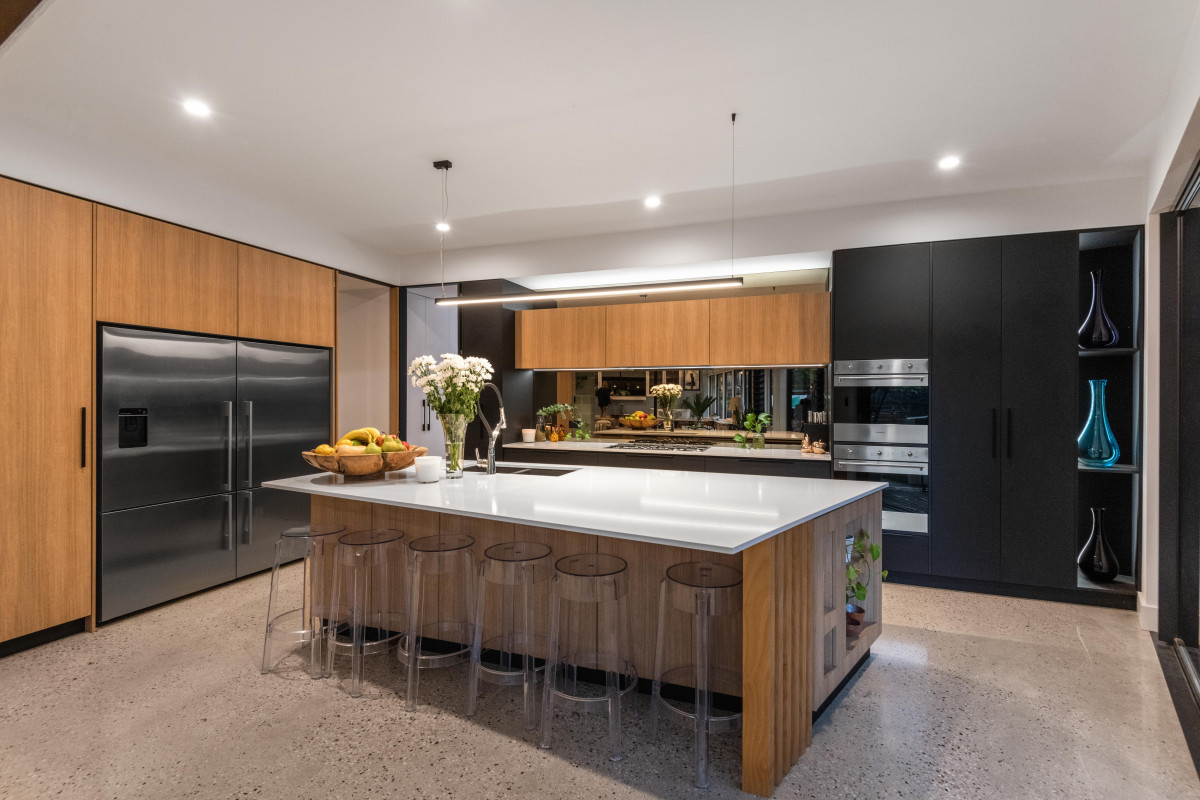 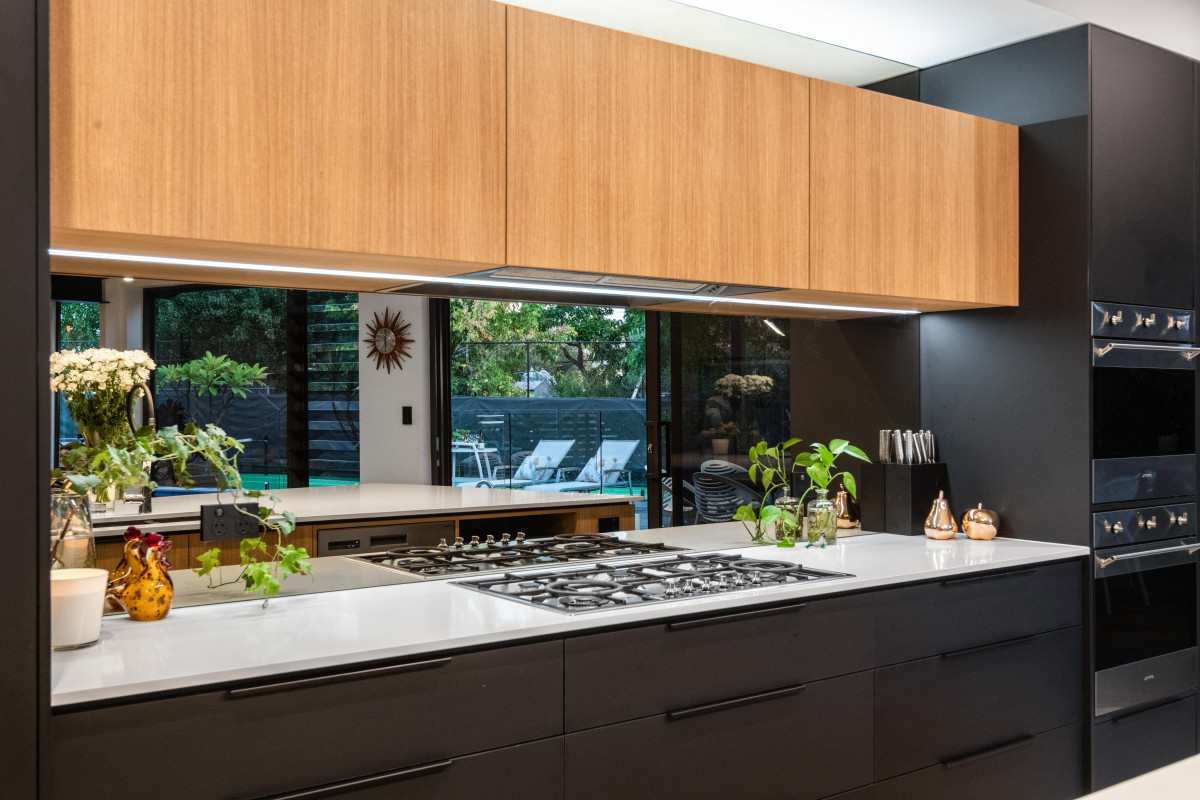 “I’ve got a little fire pit down the side, and a little garden area where my daughter does pilates, there are nooks and crannies everywhere,” Bec says.

Although the home has separate spaces, they have been designed to provide interactive living between the occpuants.

The original lounge space can be heated with a gas fireplace, and there’s also a separate wood fire to set the mood in winter. The master accommodation is complete with a large walk-in robe, luxurious bathroom, separate chill out room, and a mezzanine balcony with panoramic views. 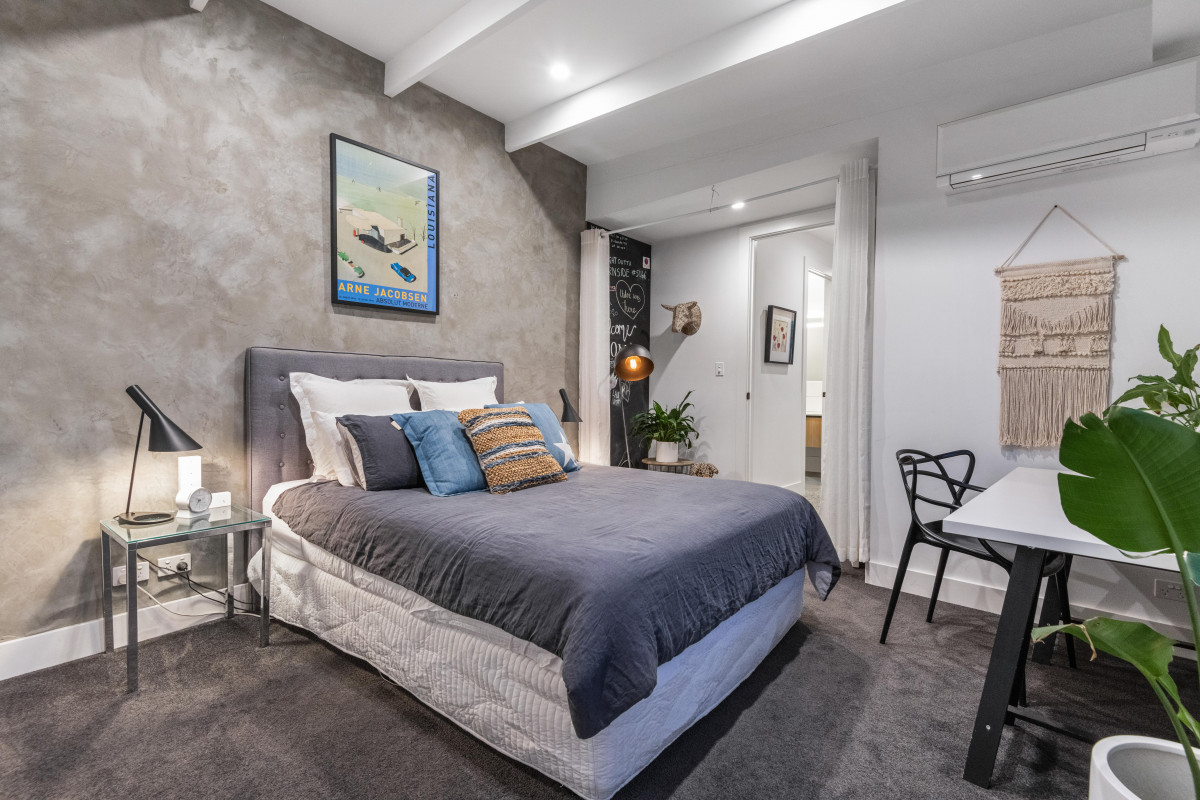 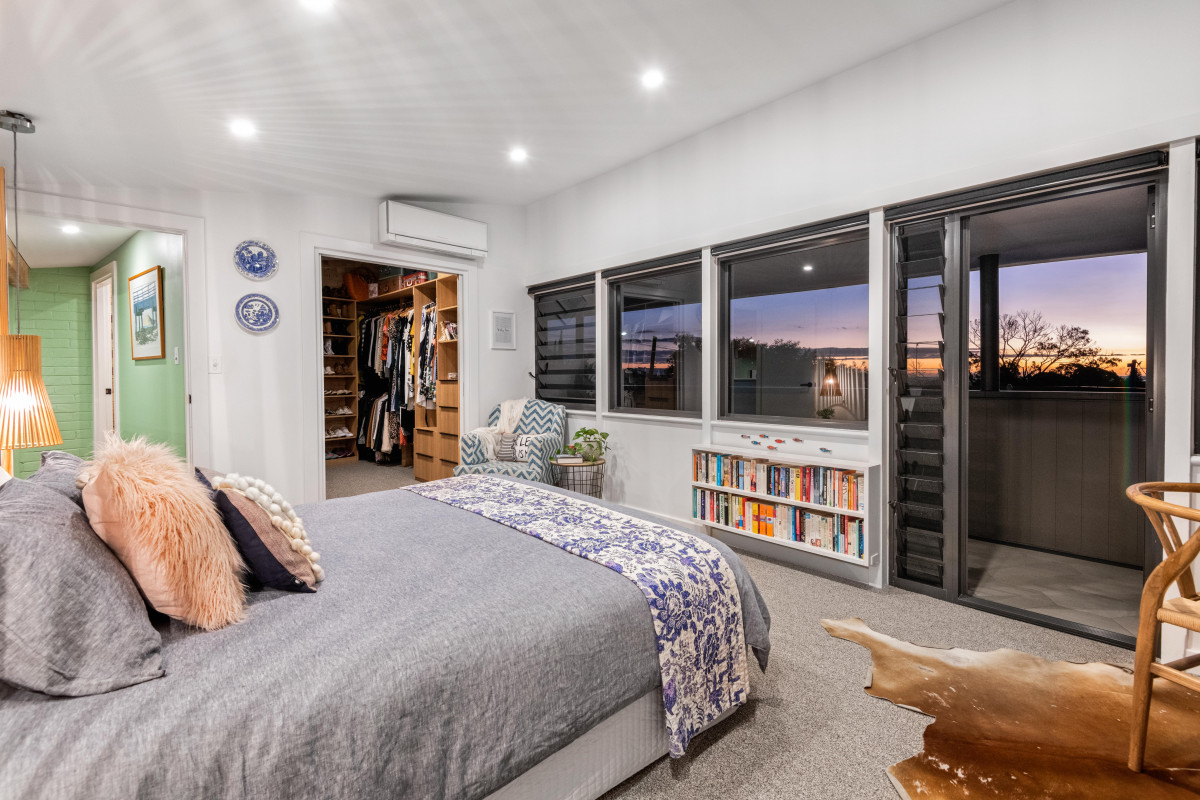 An original three-storey cottage on the property has also been renovated, with separate access at number 29, while the main home is number 27.

The cottage includes a lofted bedroom, kitchen, separate study and updated bathroom and laundry. Outside there is even room for a small veggie patch and space to park a small car.

“I think too many homes create separate areas for the kids where they’re tucked away out of sight, but I wanted to create something where everyone would interact together,” Bec says.

“It’s the perfect place to lock down right now, because you could have 20 people living here and not feel on top of each other.”

The sale is being handled by Brett Pilgrim and Leon Yuan of Harcourts. 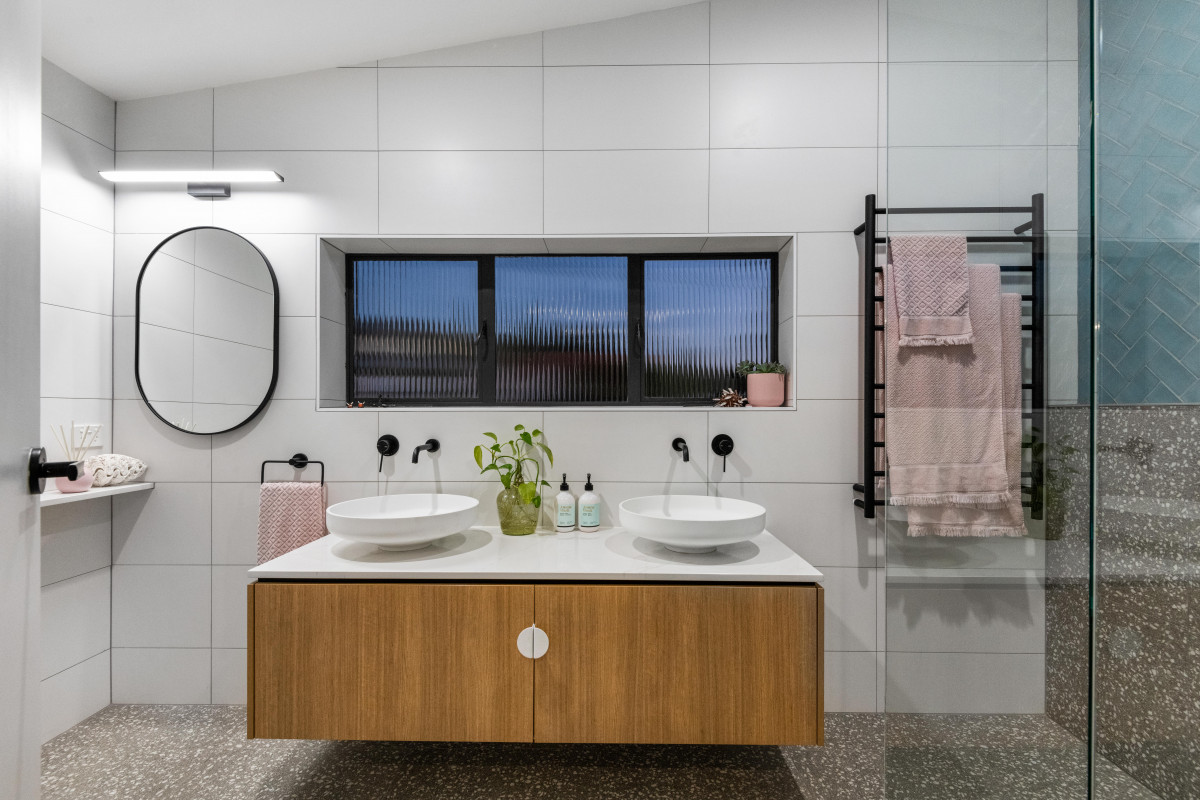 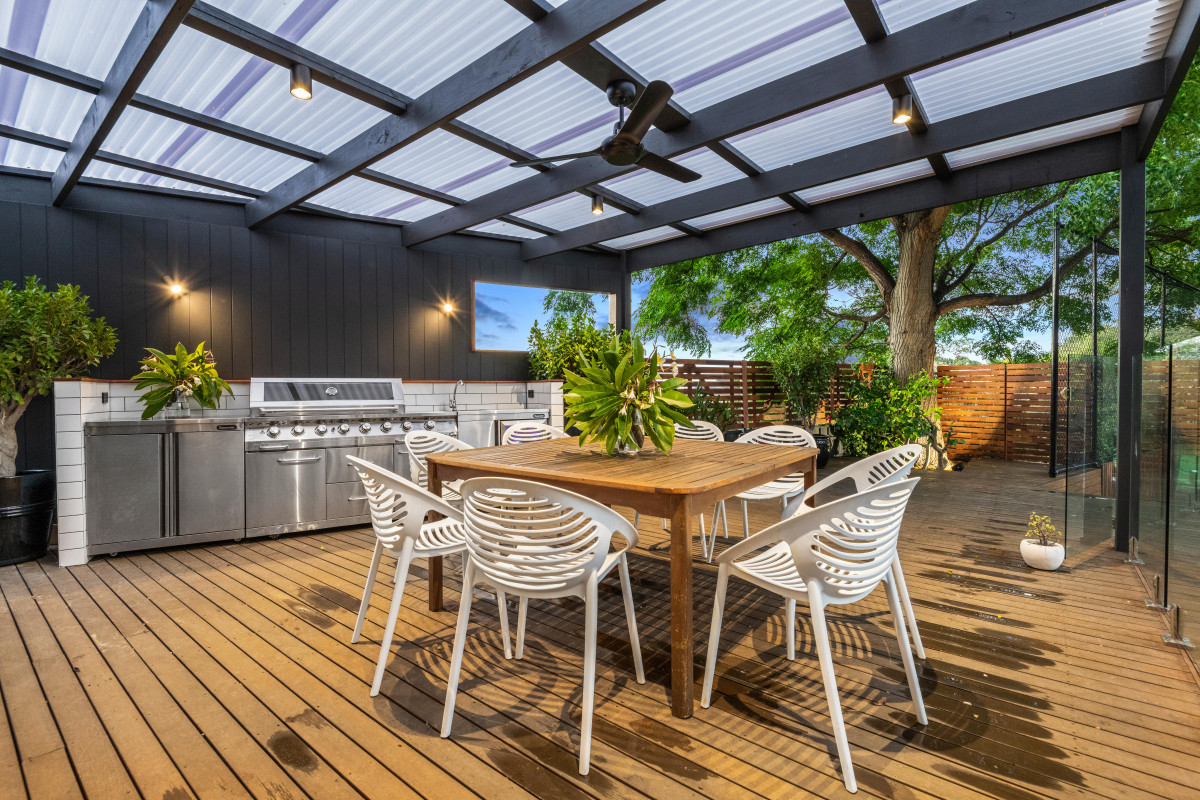 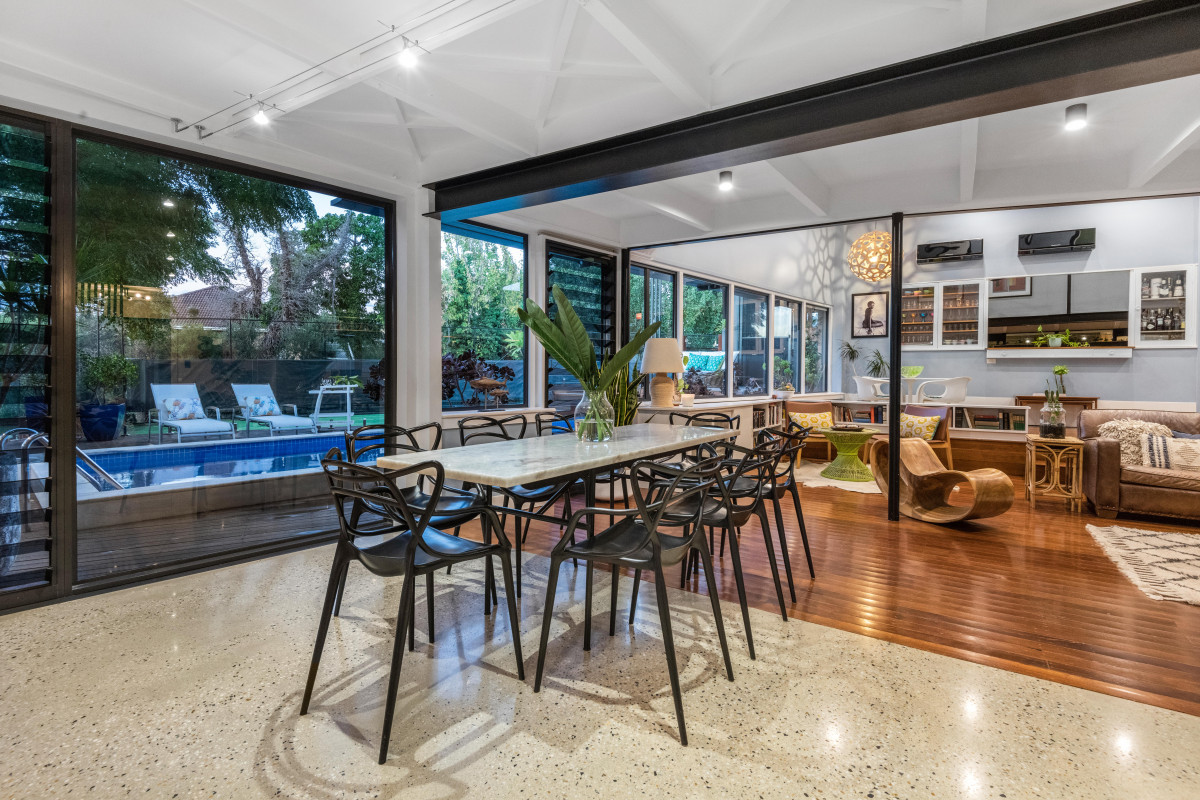 Roz Hervey, Creative Producer of Restless Dance Theatre, doesn’t let the passing of time become a barrier to making moves. Inject fun, colour and vibrancy into your wardrobe every day.

New for 2021, the SALIFE Absolute Best Awards will celebrate South Australian products, businesses and individuals. With nominations now open, it's time to have your say...

‘We draw upon Sam’s strength and courage’

In honour of their late son Sam, who would have turned 21 this year, Marty and Michelle Roberts continue to raise funds for sick children and their families through their new drive, Challenge 21.