While most of us are slowly waking from our slumber each morning, there’s a group of brave souls plunging themselves into the crisp waters of Second Valley.

Glenda Eichner (seated, far left) has designed and made eye-catching and matching bathers for herself and fellow Second Valley Swimming Association Members.

The waters off the beach at Second Valley are a haven for visitors. The picturesque rocky hills and pristine azure sea attracts scuba divers and holidaymakers in summer. But even in the depths of winter, there’s a dedicated group of locals that aren’t afraid to take a dip.

Half of the group are retired, but certainly not shy and retiring. The eldest member is 86, while the youngest is just a spring chicken at 43 years old. 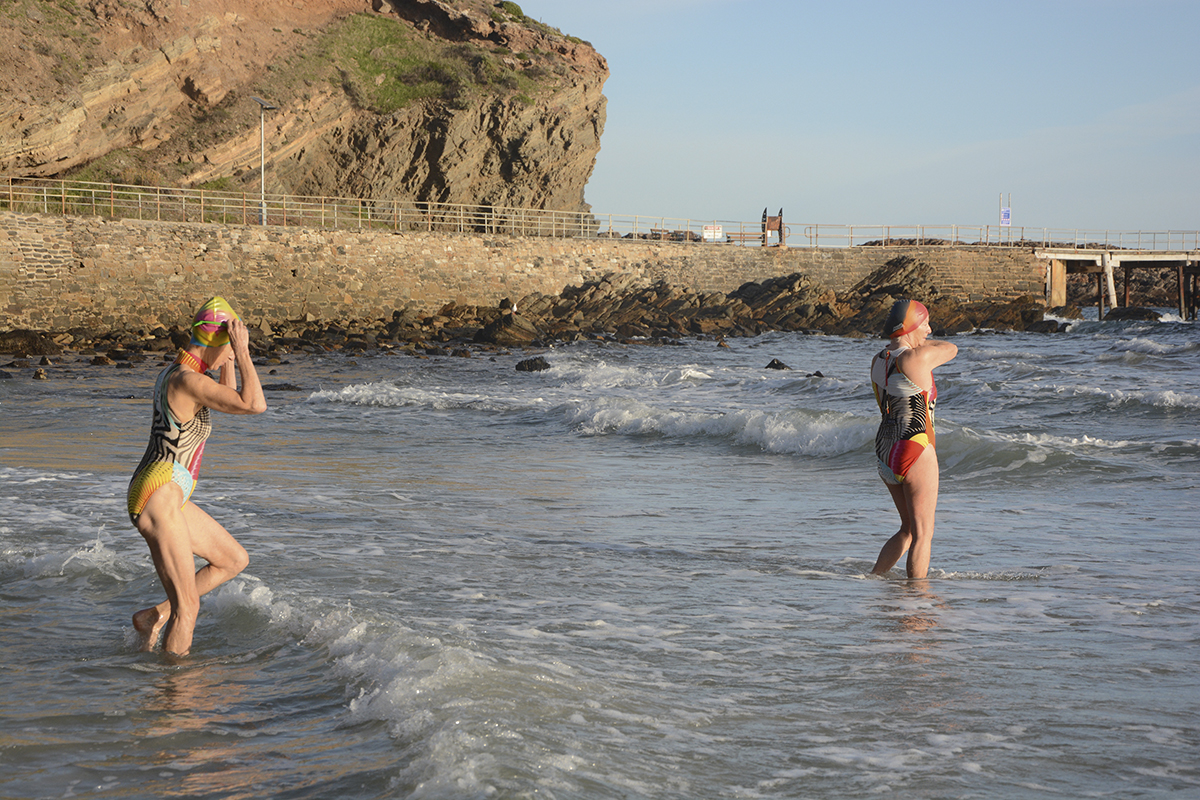 Emerging from the water on a clear day, the group is resplendent, not only in matching goosebumps, but also matching bathers.

The badge on their tropical-themed one-piece bathing suits reads SVSA — Second Valley Swimming Association. While this might give them the appearance of a rather organised, professional bunch, they’ll happily tell you they’re anything but.

Second Valley resident and self-proclaimed captain of the association, Graham Smith is no stranger to the beach. He’s been taking early morning dips there for 25 years. The former police officer, soldier and CFS volunteer is at peak fitness and doesn’t look to be slowing down any time soon.

“It’s the best way to start the day,” Graham says. “It becomes addictive.”

Graham caught the attention of local couple Garry Jaffer and Glenda Eichner, and all three started swimming together. Little by little, the group amassed about 10 members.

Gary Lewthwaite spends half of his time in Adelaide, and the other half in Vietnam, but ventures down to Second Valley regularly to join the swimmers, along with his wife, Loan. “We’d just come down to the beach to view these old nutters who would be out there every morning swimming, and we ended up being one of them,” Gary says.

When Loan first moved to Australia, she didn’t know how to swim, and had only ever been in the warm waters of Vietnam, so the change of temperature was something of a shock. However, after taking a few swimming lessons, she now jumps in with the rest of the group when she and Gary are in Second Valley.

The group also runs a very formal-sounding AGM. The official minutes from their last gathering state proceedings lasted 14 seconds, and then it was onto the beer and wine.

One rule the group lives by is that you have to swim all year round. However, Wendy Pember says the winter water cools arthritic joints.

“It’s invigorating and if you don’t make it one morning, you feel like you’ve missed out on something. And then it feels twice as cold the next time you go in.”

The group turns heads in their matching bathers, which designer and patternmaker Glenda created for everyone. Glenda has worked on the islands of Syros and Mykonos in Greece, making pieces for private clients, as well as in teams at Marks & Spencer in London and Wayne Cooper in Sydney.

Now newly retired, Glenda first made bathers for herself, husband Garry and their grandson, River. Her intention was just to make people smile, but her talent was too good not to put to further use, so she began to fashion brightly-coloured cossies for everyone since the group started to take shape a couple of years ago.

Although, you do have to work your way up to the honour of donning one of Glenda’s designs. For those who have just joined the group, it’s provisional pink, until they can earn the more eye-catching bathers.

Each member gets some input into the style they’d like to wear. There’s a timeless budgie-smuggler for the boys, as well as a slightly — very slightly — more modest short. For the girls, there are halter neck, one-shoulder and classic one-piece designs.

Once their swim is over each morning, there’s a quick de-robing while everyone pulls on their dry clothes, then they all walk back home as a group, each member peeling off on their stop, with a goodbye until tomorrow.

This story was first published in the July issue of SALIFE magazine.