Artists find friendship and support through the ‘Friday Fridas’

Meet the Friday Fridas ­– a close-knit group of creative women who have finessed the art of networking and friendship. 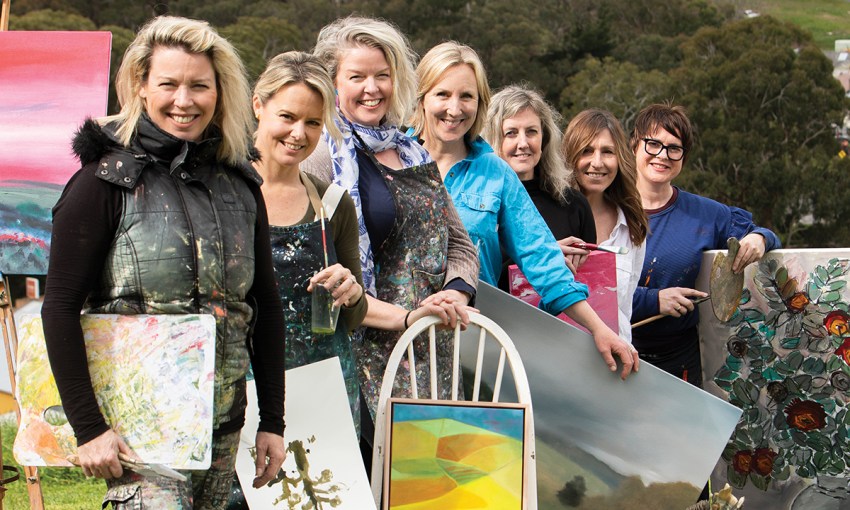 Painting is a solitary endeavour for most artists, requiring hours alone in the studio or working en plein air. But for members of self-described “informal underground art group” the Friday Fridas, it is also the thing that has brought them together.

The Fridas are eight female professional artists, mostly living in or near the Adelaide Hills, who have formed a strong friendship and support network based around their shared passion. They catch up regularly, swapping ideas and advice about art and life, and five of the members last year showed work in their first group exhibition together, Ode to the Orchard, at The Main Gallery in Adelaide.

Sonya Unwin, one of the original members, describes the Friday Fridas’ catch-ups as soul-enriching:  “The value of this group is that they’re all really strong women, and they are amazing artists. I’m inspired by all of them, whatever conversations we have.

“There’s technical skill and knowledge in this group that is really valuable, from freight to framing, to colour to chemicals, to dress sense to parenting – you name it,” she adds, as a fellow Frida chips in that Sarah McDonald is the dancing expert.

Sarah, an artist and art teacher with more than 20 years’ experience, who is known for her richly textured oil paintings, is the axis around which this group evolved. She already knew, or knew of, most of the members through their art, and when fellow oil painter Elisabeth Howlett introduced herself at a local art shop around four years ago, Sarah suggested they catch up over lunch. She also invited Sonya, Mariana Mezic, Greta Laundy and Cathy Gray.

“We had a fantastic lunch,” Sarah says. “We shared so much and we didn’t draw a breath because we realised there are topics that we could really understand and bounce off each other that you can’t talk with everyone else about … all the highs and the lows and the emotional rollercoaster of working as a professional artist.”

It was Greta who suggested the name the Friday Fridas, inspired by famous Mexican painter Frida Kahlo, and the fact that Friday was the day that best suited everyone to catch up – mostly for lunch at someone’s home, but occasionally also for a night on the town. The group has since grown with the addition of two artists, Amber Stokie and Romany Mollison, who moved to Adelaide from interstate.

Amber, who came from Geelong, knew she would have to make an effort to make new friends – “to find my tribe”, as she puts it. A mutual friend put her in contact with Greta, who invited her along to a Friday Fridas lunch.

“All of those elements that we talk about – the technical elements of painting – were there, but for me, it was also meeting people in this new city,” Amber says.

“I did have art friends in Geelong and I’d been to uni in Melbourne and I had people there, but I find that this group is probably even more close-knit and really invested in catching up; it’s really important to us.”

Romany moved to South Australia from Sydney with her husband and their toddler in December 2019 and had a frightening introduction to their new home. The family was living at Lenswood – in the old stone cottage on the apple orchard property where we are meeting, and which later inspired the Ode to the Orchard exhibition – when the Black Summer bushfires broke out.

“You could see smoke just on those far hills there that were still smouldering days after,” she says, pointing into the distance. “We woke up and it was going to be 42 degrees so we thought, let’s just head off to the pool at Hazelwood Park, and we were already heading out when the fire siren went off. We were not really prepared.”

The family grabbed some things, left the house and spent a few days staying with a friend in the city. Luckily, the property – which they have spent countless hours rebuilding and renovating – was spared. The Hills have proven to be the perfect home for a painter inspired by nature, light, shadows and mist. Once things settled down, Romany, like Amber, set about finding new friends and a network that could help her with her artistic practice.

“In Melbourne [where she grew up], there’s a little gallery on every corner where you can rent space and in Adelaide it was hard to find what was what,” she says, adding that she came across Sarah online and sent her messages asking for advice about art shops and framers.

“After I’d stalked her enough times, she said, ‘Just come and join our group’,” Romany laughs. “It’s been life-changing for me.”

The members of the Friday Fridas all have their own professional home studios and each has a distinct style, ranging from Greta’s more abstract paintings and Romany’s moody landscapes, to Elisabeth’s expressive portraits of native Australian flora and Mariana’s vivid, whimsical portraits of women. They have a chat group online where members are constantly messaging about anything and everything. Someone will answer almost immediately, especially if it’s urgent – like when Cathy, who specialises in intricate and finely detailed ink works, had a crisis with a mandala she was making for a buyer in the UK.

“My work takes a really long time, like 200 or 300 hours, and I was doing a commission piece and I got a crease – it was in my car and my son threw his schoolbag into the back and creased the paper,” she says. She sent out an SOS to the Fridas and Sonya dropped everything to help her find a solution, which involved ironing the paper to get rid of the offending crease.

“The other great thing we do is little group critiques to get a really valued, frank eye on your artwork,” Sonya says. “You put your work all out in the studio and give them [the Fridas] a call and two or three will rock up. It’s about being able to have a critical and technical eye on some artwork because creatively you can go down rabbit holes.”

When the opening of The Main Gallery in Adelaide’s Halifax Street towards the end of 2020 inspired the suggestion of a group exhibition, they gathered to discuss ideas at Romany’s beautiful Lenswood property, which offers sweeping views over the surrounding orchards and vineyards. It was agreed that the five Fridas exhibiting in the Ode to the Orchard show – Romany, Sarah, Greta, Amber and Sonya – would produce a body of work responding to the Lenswood landscape over four seasons, each capturing it in their own unique way.

Sarah, whose paintings respond to the light and landscape with an abundance of rich oil colour, says Ode to the Orchard is a nod to the historical landscape painting tradition of the Heidelberg School, a group of Australian Impressionist artists who painted together en plein air in the 1880s and 1890s. While some of the group of five completed their works in the studio, all the paintings Sarah is showing were done entirely on site.

“I love painting outdoors,” she says. “It really pushes you. It’s a challenge that takes you into an environment where you’ve got no borders, no boundaries. You’ve got the big wide landscape in front of you, and how do you respond to it? That’s what’s great about working outdoors, and in this show that we’re putting on it is going to be so fascinating to see how we all respond.”

Amber’s works reflect an emotive response to place, while Sonya is a natural expressionist and Romany has created paintings that are alive with atmosphere.

“I think, as artists, you’ve got to find something that talks to you about the landscape and for each of us it’s different things,” Greta says.

“For me it’s the shape and the patterns – I’m very abstract. Colours are my thing, too.”

Ode to the Orchard has given these members of the Friday Fridas an opportunity to expand their skills and push the limits in their own practice. They’ve also had a lot of fun along the way, even when the winter chill, wind and rain has made painting outdoors difficult.

“This one’s a fog magnet, so she was out here in the morning with her boots and her jarmies on, hunting fog,” Sonya says of Romany, laughing over one weekend painting excursion.

Romany adds: “Lenswood doesn’t know what to make of us, these crazy women in pyjamas on the hill in the morning.”

It’s clear how much all the Friday Fridas value the friendships they’ve formed as they talk about how they motivate each other to enter art competitions, celebrate each other’s wins and exhibitions, and support each other through more challenging times.

“One of the things about this group is that every single woman has a lot of courage, because it takes courage to go and talk to somebody. It takes courage to message somebody if you’re from interstate,” Elisabeth says.

“I think when we look back you can see how much it’s built; how we’ve all put in but we also all receive a lot.”

This article first appeared in the November 2021 issue of SALIFE magazine.