A string ensemble of 16 Adelaide Symphony Orchestra musicians will present free concerts at community halls across the metropolitan area next month in a series inspired by the idea that music can provide a sanctuary in unsettling times.

The ASO has partnered with Community Centres SA for the eight-concert series, which is titled Sanctuary and will mark the orchestra’s first live performances since its planned 2020 season was put on hold in March due to COVID-19.

“I think the idea of music as providing a sanctuary for the listener is very strong, especially given the circumstances today,” says ASO conductor and presenter Martin Butler, who will lead the ensemble for the Sanctuary performances.

“The original meaning of the word describes a place that provides immunity from arrest for fugitives or debtors, but it has now come to mean a place of refuge or protection.”

Butler says he found inspiration for the series’ title from the Billy Joel song “And So It Goes”, which will be one of nine short pieces in an eclectic program that includes some French baroque music (“Chaconne” by Marin Marais), Argentinian tango composer Piazzolla’s “Libertango” and a traditional Swedish jig arranged by ASO violinist Belinda Gehlert. Also included is a piece by Italian composer Ennio Morricone, who died earlier this month.

Audiences are promised an entertaining performance that will engage people of varying backgrounds and musical knowledge.

“It’s serious, and not serious, at the same time,” Butler says.

“They’ll also be well informed about the music and certainly leave having learnt something new about the pieces. I use a slide projector to help with our presentation.

“It’s also an interactive experience, although I don’t want to give the game away on that!”

A key principle driving the ASO’s community concerts is the idea of “access for all”.

All the performances in the Sanctuary series will take place either late morning or early afternoon, with the first at the Goodwood Community Centre at 2.30pm on August 3.

“A community centre can be a sanctuary; a place to feel understood, welcomed, connected with those around you,” Goodwood Community Centre co-ordinator Genevieve Dawson–Scott says.

“There isn’t a single person who is unaffected by this pandemic, and the stress of the unknown surrounding us in this world. Music can be so powerful and uplifting, and so we are very excited to be able to offer our community a brief, beautiful and joyful experience, thanks to the ASO.”

Butler says he and the musicians can’t wait to “hear some actual applause” after such a long time.

“We are looking forward to re-establishing the relationship with our audiences as soon as possible. I hope our music provides some solace and humour in these disquieting times.” 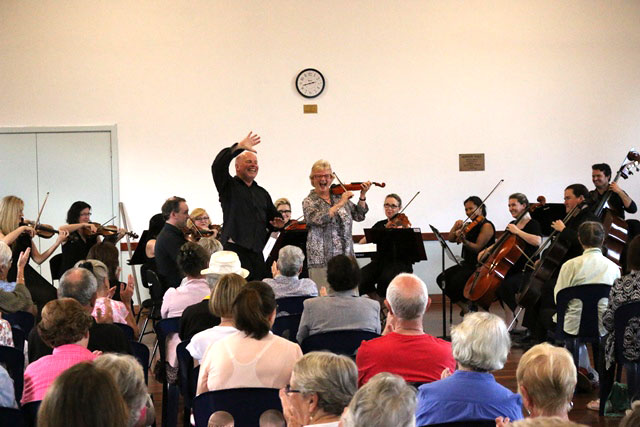 See the ASO website for dates and details of how to secure your seat.