Family fun in the Garden

The Garden of Unearthly Delights isn’t just about grown-up fun. Bring the little ones along to experience the wonder at Rundle Park until March 15.

Warm up your vocal chords, get those muscles moving and embrace your inner child. Don’t be afraid to sing and dance along with the kids.

A rock star of the children’s entertainment world, Peter Combe returns to The Garden with a quirky new show, Brush your Hair with a Toothbrush. There are some new songs, but even mum and dad will be singing along to Newspaper Mama and the classic Wash Your Face in Orange Juice.

For the really small ones, Monski Mouse has a couple of shows — Monski Mouse’s Baby Disco Dance Hall and Monski Mouse’s Baby Cabaret. The former is all about bouncing and bopping to retro hits, pop favourites and thumping nursery rhymes. The latter is a cabaret of the classics, reworked songs and puppetry. Your little ones will love Monski’s colour and energy.

Seasoned international performers Byll and Beth of The Little Stevies bring their show Teeny Tiny Stevies. There are no characters, no costumes and no props — this one is all about good quality live music for kids. The adults might even find a new favourite band. 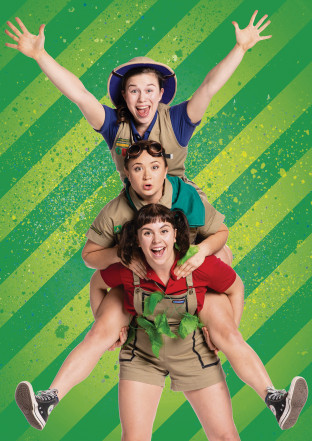 Is there anything more magical to children than seemingly gravity-defying circus performances? There’s a long list of more mature shows at Fringe in this category, but the kids don’t miss out either.

Circus is mixed expertly with comedy and imaginative play in Don’t Mess with the Dummies, when the Dummies go on an adventure in the jungle. The cast of three powerful female acrobats showcase their signature slapstick style. Dummies Corp founder Jamie Bretman says the performers are breaking the mould. “We’ve found our industry does not always encourage women to take on the clown role, let alone an entire female ensemble. We felt we were in a position to nurture these incredible women, giving them a platform to express themselves through comedy, imagination and play,” Jamie says. There’s also an all-male ensemble with Splash Test Dummies.

Brass Monkeys is all about celebrating those who march to the beat of their own drum, with high-flying tricks. A sell-out at Edinburgh Fringe, Children are Stinky is set to a rocking soundtrack and will leave children and adults with their jaws on the floor.

Introduce the kids to the wonderful world of theatre with an array of colourful shows.

Technology and theatre unite in Ann-Droid — The Wonderful Adventures of a Robot Girl. The fascinating story is told with projections, a smart LED costume, a robot ball and a drone. The show tells a modern version of Pinocchio — a robot girl who wants to be human and goes on a journey on the ground, in the air and underwater to overcome challenges.

Presented by Prospect Theatre for Young People and Cirkidz, Fear (Not) was a hit at 2019’s DreamBIG Festival, featuring themes that resonate with young people.

Children are often the ones in front of the lens, constantly photographed by doting parents, but Foals turns this on its head. The exhibition will feature photographs taken by children across the state, celebrating what they love and the place they live, from everyday subjects to the exciting things in life.

If puppetry is popular in your house, the Amazing Drumming Monkeys is the show to see. Laugh, dance and drum along to the monkeys.

The name will lure you in and the hilarity and silliness will make you stay. There’s really no resisting Mr Snot Bottom’s Horrible, Terrible, Really, Really, Bad, Bad, Show.

OUT IN THE GARDEN

Take advantage of the Garden’s free entry and bring the whole family to The Garden Sessions on Saturdays, with musicians performing live under the shade of the trees for all to enjoy. Watch the roving performers around the venue and try the rides — there’s something for all ages. The teacups are perfect for the little ones, or The Fury is worth a go for older children. The parents’ room is near the rides for those nappy changes and other parenting pit-stops.

Make your way to the markets to find something for the children, along with design pieces, jewellery and clothing. When it’s time for a refreshment, try the crazy spider drink at The Float Queen. Or get along to Pineapple Brothers for a coconut water in a coconut or pineapple juices in a hollowed-out pineapple — there are alcoholic options for the adults. For lunch or dinner, wander the food stalls with lots of options for little hands; you really can’t go past the hot donuts.

This story first appeared in the February 2020 issue of SALIFE magazine.