Now in its sixth year, Parrtjima festival will illuminate the Alice Springs desert with a new series of large-scale sculptures in a vibrant celebration of Indigenous art and culture.

While most installation concepts are new, Grounded is a favourite that will return once again this year.

The only Aboriginal art festival of its kind in the world, Parrtjima will again bring Alice Springs to life after dark through a large-scale exhibition of light, sculpture and music.

From April 8 to 19, Parrtjima will celebrate Central and Western Desert Art using modern technology through an array of giant illuminated sculptures and a centrepiece light installation projected onto a two-kilometre span of the MacDonnell Ranges.

Each year, the free festival celebrates the ways in which artists evolve and experiment with different styles and materials, while staying true to country and culture. 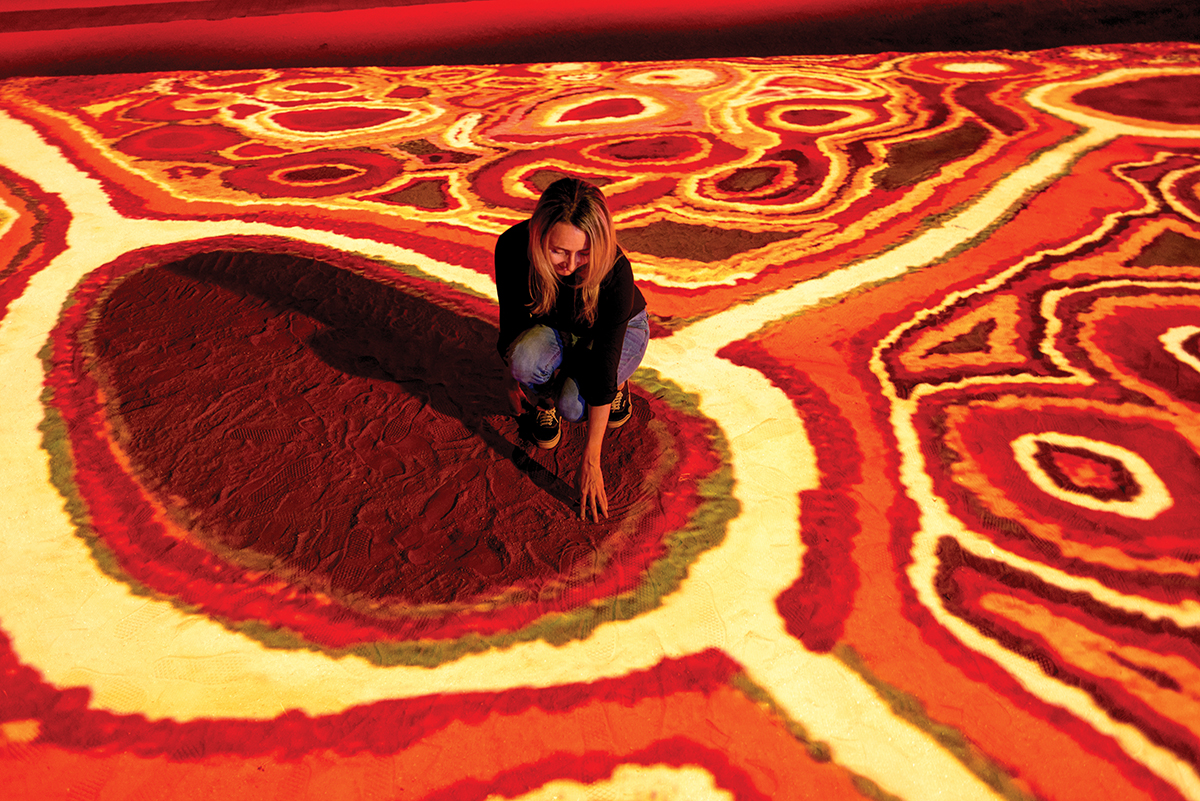 “This is the most unique light festival in that we’re in the heart of the Australian desert with significant artworks that often tell ancient oral stories. I really don’t think there’s anything like it in the world,” says the festival’s curator Rhoda Roberts. “For Australians, it’s the pilgrimage you need to make in your lifetime.”

The festival’s live music program is headlined by Casey Donovan and SA-based electronic duo Electric Fields. There is a Deep Listening program of talks, as well as Indigenous workshops, demonstrations, food vans and a film program.

This year, Parrtjima embraces the theme of “Future Kultcha” which Rhoda, who is also the event’s First Nations Adviser, says revolves around an obligation to pass on ancient stories to the next generation.

“It’s about an intergenerational transmission of culture, to which there have been interruptions over the years, whether it was government policies, or situations where people were relocated from their lands,” she says.

“But now, we’re seeing the next generation steeped in the footprints of their ancestors and they’re still continuing to paint, sing or dance those old stories, but in different mediums.”

Rhoda says the young artists are bringing a global perspective to their work and a freshness to the content of the festival.

“For most of the artists, what they paint is a reflection of their grandparents’ stories and they’re quite ancient stories, consistently adapted and continued with new technology.

“It’s really exciting to have these new voices and a fresh lens of First Nations peoples who are quite global in their approach, because they’re the generation that has been linked to the internet.”

Located at the base of the spectacular West MacDonnell Ranges and just 10 minutes’ drive from Alice Springs, Desert Park is closely connected to the creation stories of the local Arrernte people. When festival-goers first step onto the site they will be greeted by Landing Culture, an installation that portrays the ways spears and digging sticks were used by men and women, but in a contemporary 20-metre-tall installation. Then, visitors will take their own journey along an illuminated network of pathways to explore the different sculptures.

The installation Merging Culture will showcase three-metre-high camels adorned with the artwork of Chantelle Mulladad, who explores the connection and kinship between Aboriginal Australians and the Afghan cameleers.

“We looked at the interconnection of the cameleers that came up through the desert country and how they worked alongside Aboriginal men building railways. It’s a very proud history, but not often told,” says Rhoda.

The central light display, projected onto a large section of mountain range, will this year have a youth focus and a soundtrack featuring Indigenous South Australian musician and artist Zaachariaha Fielding. The festival provides a viewing area to be seated and listen to the audio that accompanies the light show.

While most sculptures are new, Parrtjima will bring back an old favourite, the Grounded Installation, which projects artwork onto the sand to imitate a vibrant landscape of wildflowers and vegetation.

“We project the work of a series of very diverse artists onto the red desert sand and you can only imagine what the landscape would have looked like thousands of years ago,” says Rhoda.

In curating the festival, Rhoda has consulted with a network of respected Arrernte people who advise on the cultural appropriateness of the paintings for the country in which they are being displayed. She says that by casting a spotlight on younger generations, Parrtjima aims to foster pride and encourage young people to embrace the culture and stories of Indigenous Australia.

“We still have that obligation as people to our ancient culture, and continuance of our languages.”

This story was first published in the March 2021 issue of SALIFE magazine.