In the garden: A childhood revisited

Mediterranean plants are well suited to South Australia and can make beautiful, and memorable, gardens.

When I was a small child, I always enjoyed visiting and playing in my gran Elsie’s captivating garden at Payneham. It was in fact an award-winning garden, many times over; a true gardener’s garden, just full of interesting plants, pots and all sorts of garden accoutrements, from gnomes to tiny stone fairies carefully placed so they looked as though they were dancing around the ponds. The garden grew an amazing number of plants, and as I remember, it was structured to some degree with stone pathways and steps, stone walling, a grotto and some very interesting feature plants.

I also recall Elsie occasionally watering the largish garden, never with sprinklers, but always by a handheld rose spray, watering in the early morning or in the evenings, after a warm day. She was always titivating with something, a snip here, bending down to remove one of the rarely seen weeds and perhaps a new cutting or plant over there. It appeared to look after itself. The garden was admired by all and many people stopped to ask what sort of plant this was, or could they have a cutting of that? Of course, Elsie would oblige, then offer them a tour of the garden.

I really didn’t know, until many years later, how genuinely “Mediterranean” her garden was. I was filming in the beautiful coastal town of Gaeta, Italy, when I woke up early on the first morning, looked out into the garden areas and was immediately transported back in time to my gran’s garden. There, where I was staying, was an almost perfect replica of similar plants and the relaxed design of Elsie’s garden. But this garden at Gaeta was growing and thriving just 50 metres from the Mediterranean sea itself.

This genuine Mediterranean garden contained all the plants that we include in our gardens in SA: colourful, lots of interest, energy and beauty. It was a genuine minimal care and water-wise garden, with ancient pines and palms dotted around and, woven in between the pathways and natural shade areas, were these familiar plants, all thriving together.

Elsie’s garden perfectly fitted the loose mould of a garden that is so popular and sensible today. It was planned to flourish in our harsh summers and cool winters, and to have continuous colour 12 months of the year. It even had a touch of Edna Walling with the pathways, grottos and garden layout; such a perfect combination. 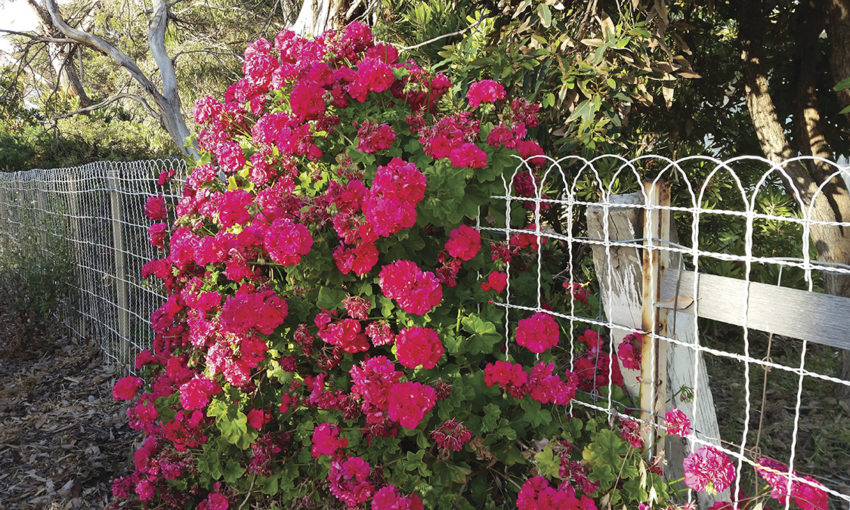 So just what makes a successful Med garden? Well, plenty of sunshine and well-drained soils are a must, as well as correct selection and siting of major plants, i.e. trees, some selected palms and larger more permanent shrubs. Allow for interesting pathway designs. These can either be a soft or hard finish. Shade is also welcomed in the garden, as this allows some plants, still hardy of course, to flourish. Courtyards can be created to offer seating and dining areas; random seating adds another dimension and focus in the garden. Don’t forget to use pottery, urns and statuary. These days old wares are found in auction houses, and nurseries have a massive selection of suitable containers.

As far as design goes, generally work with what you have, small or large, be bold, be confident and above all have an inquiring mind and a sharp eye. Once you know what a Mediterranean garden looks like you will be amazed at just how many of them there are here in SA. More than likely you have a semblance of one already. The Mediterranean garden club is well worth joining. There you will meet like-minded folk with a wealth of knowledge to impart to new members.

Click here for more detail regarding setting up your very own Med garden, but I would like to leave you with a teasingly small list of the many hundreds, if not thousands, of suitable plants. I bet you will know or recognise most of them:

Salvia, succulents of all shapes sizes and colours, grasses such as festuca, agapanthus, roses, lavender, rosemary and off course thyme and a dozen other herbs, garlic, chives, trailing plants such as trachelospermum, shrubs like russellia, hebe, some selected grevillea, the list is long, agave, achillea, geranium, pelargonium, daisy.

A final comment: most plants take at least two or three summer periods to settle and establish, so it is critical to try and plant in the cooler months either coming into or going out of summer. Most plants will require regular deep watering to get them started; as they mature this can be cut right back then becoming a true water-wise area, but you will have some areas that will need water more often, try and keep these to a minimum. Organic fertilisers are great for most plants you wish to grow. They gently feed the plants but also add valuable organic matter to your soil. Be vigilant with removing weeds, as they will nick water and nutrients from your loved plants and, finally, mulch. There are so many that are suitable: rocks, pebbles, gravel, organic. Check them out at your nursery, but mulch!

This story first appeared in the June 2018 issue of SALIFE Magazine.

No expense was spared in the intensive renovation and modern extension of Vito and Anya Rinaldi’s 110-year-old villa in one of Adelaide’s top suburbs.

The best of both worlds

When you feel a pull towards both the country and the city, the perfect solution is to find a happy medium that provides the best of both worlds.

Out & About: Lunch with Judy Murray

What’s on: The Tour Down Under begins and support for bushfire relief