You can sink your teeth into history, thanks to a dedicated group of locals on a quest to revive interest in the delights of heritage apples. 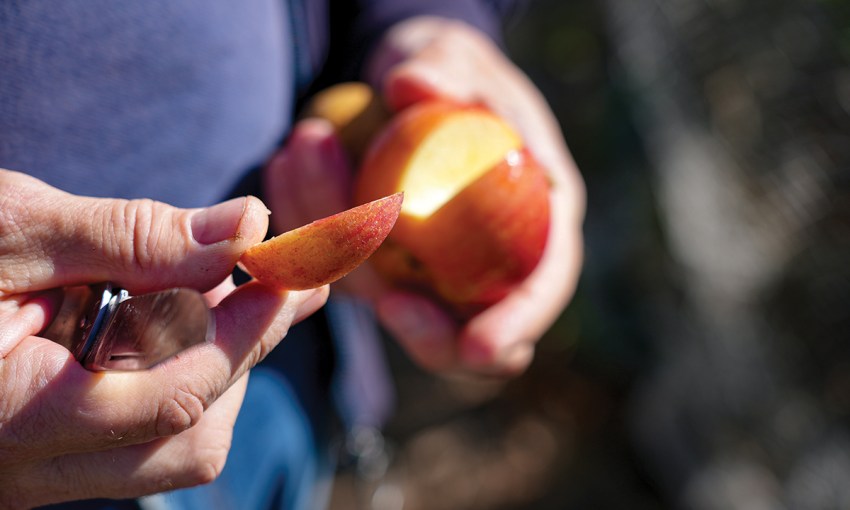 Heritage apples are nominally defined as named varieties that are no longer readily available for purchase.

Australia’s long connection with heirloom varieties dates back to the mid-1800s, when Maria Ann Smith’s keen eye discovered a chance seedling that grew to produce an abundance of lime green, tart-tasting and immensely well-suited cooking apples we now know as the much-loved Granny Smith.

The charm of heritage apples lies in their wonderful diversity of flavours, textures, shapes, colours and uses, which have evolved through selective breeding or lucky finds over the centuries. Whether you like your apples sour or sweet, crisp or crumbly, to eat or cook, red, green, yellow or somewhere in between, there’s an heirloom type to suit.

Each heritage variety has a strong sense of history, being directly traced, through all the generations of cuttings taken and grafts made, back to the first tree of its type.

In a world increasingly looking for choice, modern apple varieties seem to have gone the other way, especially when it comes to fresh fruit. Supermarkets and greengrocers offer a selection of six or seven different apple varieties, at most, a far cry from the early 1900s, when more than 2000 different types of apples were grown and sold across Australia.

Back then, apples were an important staple for farms and households. They were eaten fresh, dried, baked and turned into brandy, cider or vinegar, as well as being a livestock feed.

Before the advent of cold storage, seasonal really meant seasonal when it came to apples. Freshly-harvested fruit would make its way from orchard to market within days of picking. Each month would bring another range of newly-ripe varieties on shelf, with differing flavours and textures to enjoy.

Sadly, the passage of time and continued introduction of new varieties has seen a plethora of once-popular apple cultivars disappear from both orchards and home gardens alike.

Many factors have played a part in this diminished availability, including the public’s preference for uniform-looking and blemish-free fruit of larger size – many heritage varieties tended to be one third the weight of modern cultivars. Couple this with their ease of harvesting and better storage potential and it’s easy to see why varieties such as Jazz, Gala and Pink Lady have been taking up orchard space at the expense of heritage varieties.

In an effort to halt and reverse the trend of disappearing heirloom apples, orchardist and president of the Rare Fruit Society of South Australia, Brenton Kortman – along with a band of dedicated society members – has been leading the charge in tracking down many of these lost cultivars.

Using old nursery catalogues, some dating back more than 100 years, as well as specialist textbooks, the apple sleuths have successfully identified and given a new life to these rediscoveries.

Due to its cooler climate and reliable rainfall, the Adelaide Hills has been the centre of the South Australian apple industry for more than 120 years. Brenton’s property at Mylor, home to 150 different heritage apples, is testament to that.

Some trees were purchased through specialist nurseries while a good number resulted from treks into old orchards or visits to abandoned farmhouses in search of a forgotten apple tree. Cuttings of these rare trees were taken, grafted onto rootstock and then planted out.

Both Brenton’s property and the Rare Fruit Society’s Arboretum at Kanmantoo, containing more than 200 heritage apple varieties, are important bio-arks helping safeguard this genus’s genetic diversity. They also provide a ready source of propagation material to graft, grow and sell to help revive the public’s connection with pommes long past.

Maintaining genetic diversity is important for all populations, be they animal or plant. While a number of current commercial apples have close parentage – Gala is the offspring of Golden Delicious, and Red Delicious is one of its grandparents – our changing climate may well require a delve back in history to retrieve more suited breeding attributes for the future.

The inability for fruit from some heritage apple varieties to be transported without damage or bruising is not a problem for a home gardener whose “apple miles” are as low as from tree to kitchen.

Selecting and planting out a range of heritage varieties that mature at different times can provide a steady supply of delicious fruit from summer to spring. Alternatively, if space is restricted, multiple grafts of the same selected cultivars on a single tree will also do the job.

The ability to pick and enjoy fresh apples for months on end is just one of the wonderful reasons heritage apples have a place in home gardens. The best way to preserve these old varieties is by planting them out yourself.

Here are just a few cultivars, each with a unique profile, that are well worth considering: 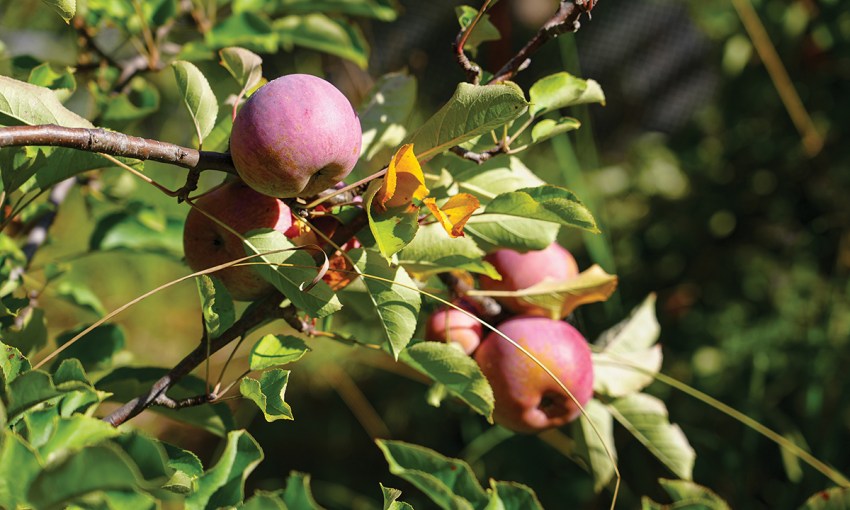 Blue Pearmain Named for its bluish tinge, this red-skinned apple produces medium to large fruit with sweet and aromatic flesh that is pale yellow and has a soft, coarse texture. This is not a long keeper, so eat fresh. Pick in April. 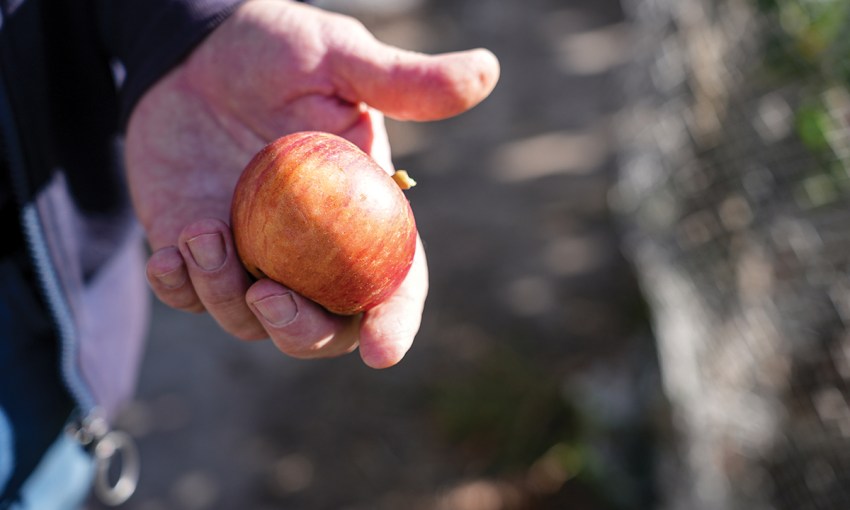 Cox’s Orange Pippin One of the great dessert apples and an English favourite from 1825, well regarded for its rich and aromatic flavour. The medium-sized fruit’s yellow skin is flushed with an attractive reddish-orange blush. Self-fertile, this variety produces its best quality fruit in cooler areas such as the Adelaide Hills and Southern Vales. Pick in March. 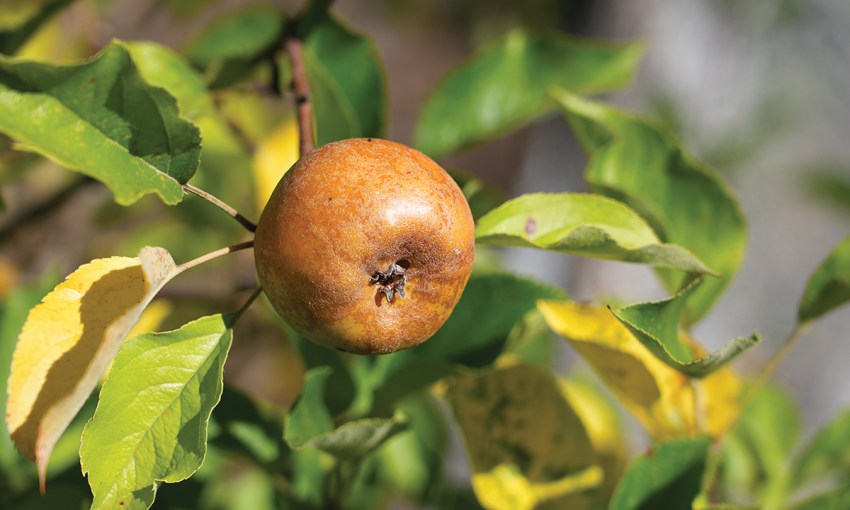 Golden Harvey Originating in Hereford UK, this famous old English apple from the 1600s is best known as a brandy (schnapps) apple. Producing small fruit with distinct russeted skin, it is a fine eating apple with creamy yellow flesh and a unique aromatic flavour that intensifies as the fruit shrivel and age. Pick in March to April. 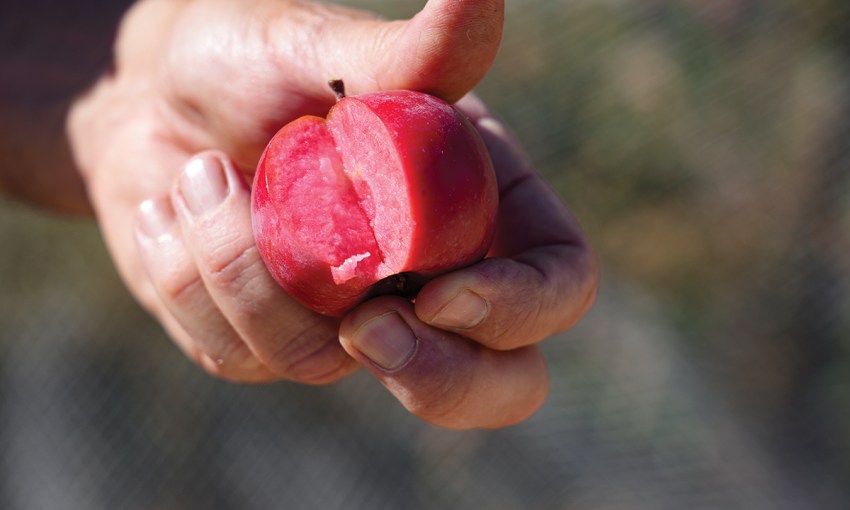 Huonville Crab A truly amazing apple with scarlet red skin and red flesh. Originating from Huonville, Tasmania the brightly-coloured flesh has a sweet tartness and is perfect for eating fresh, cooking or making cider. Pick in April. 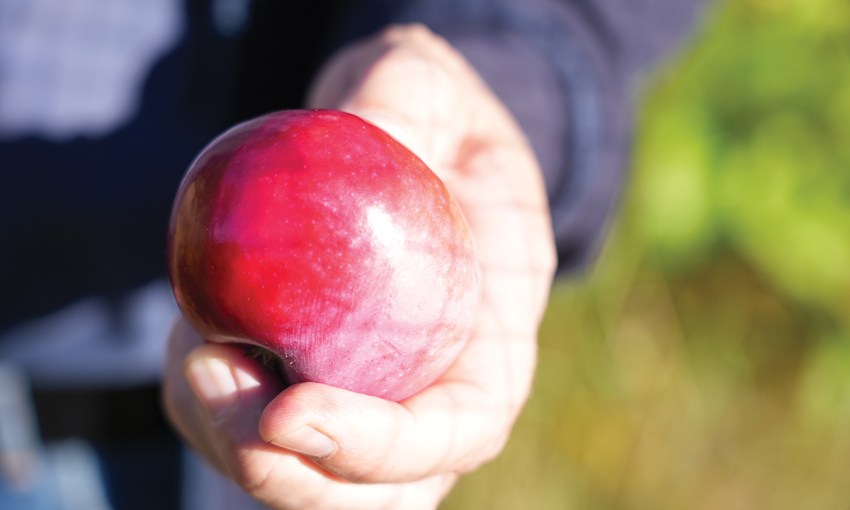 MacIntosh Classic apple colours with a bright green base covered by a wide splash of deep, shiny red. Originated in Canada more than 200 years ago. Satisfyingly crunchy, with a unique raspberry/strawberry aroma and a tasty balance between sweet and tang. Pick late February to early March. 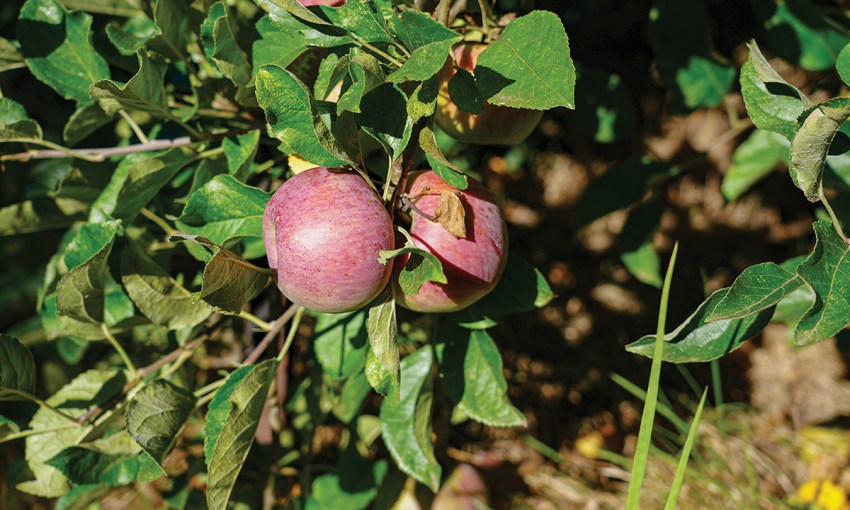 Northern Spy Developed by a farmer in Rochester, New York, in the early 1800s. A top all-rounder, whether eaten fresh or cooked, the fruit is very large and round with striking red skin streaked with green. The flesh is creamy white, crisp, and sweet. Ripens mid to late March. 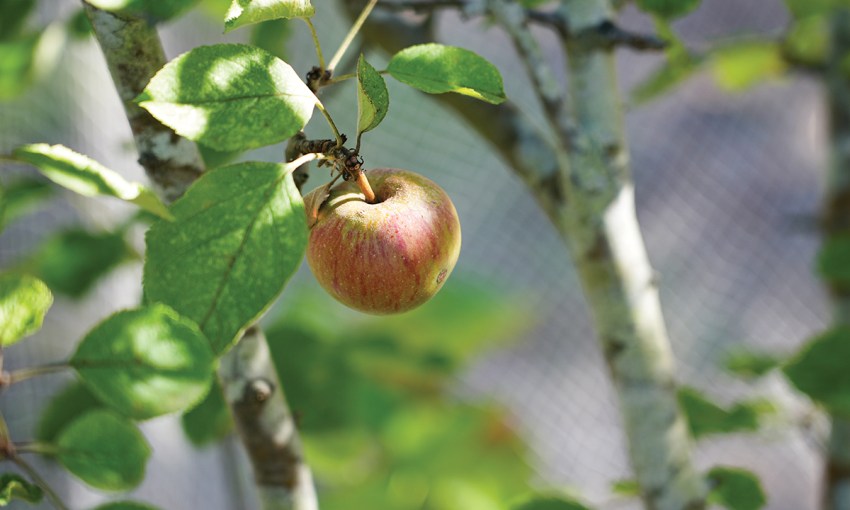 Rokewood One of Australia’s first apple cultivars from Rokewood in Victoria and the grandparent of Pink Lady. Crimson-orange round fruit with a firm, rich and tangy taste. A fantastic dessert apple. Pick June to July; stores well into spring. 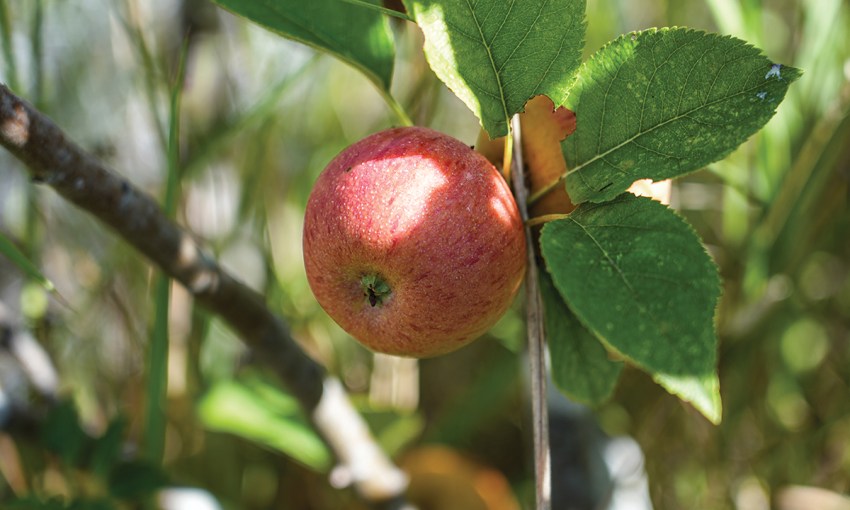 Scarlet Non-pareil This beautiful apple was found growing in the garden of a publican in Surrey, England in 1773. Scarlet and crimson with a bronzed russet cap. The flesh is firm and crisp with a rich balance between sweet and tang. An old world favourite grown in the Adelaide Hills in colonial times. Pick in April. 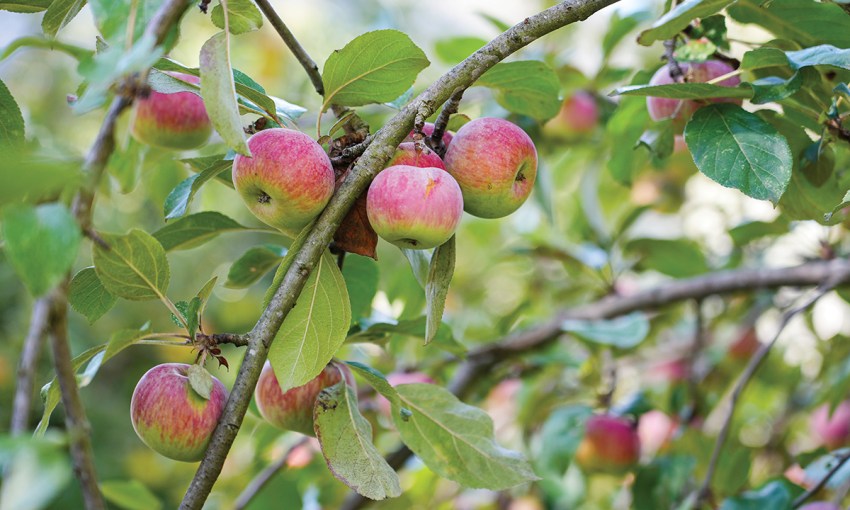 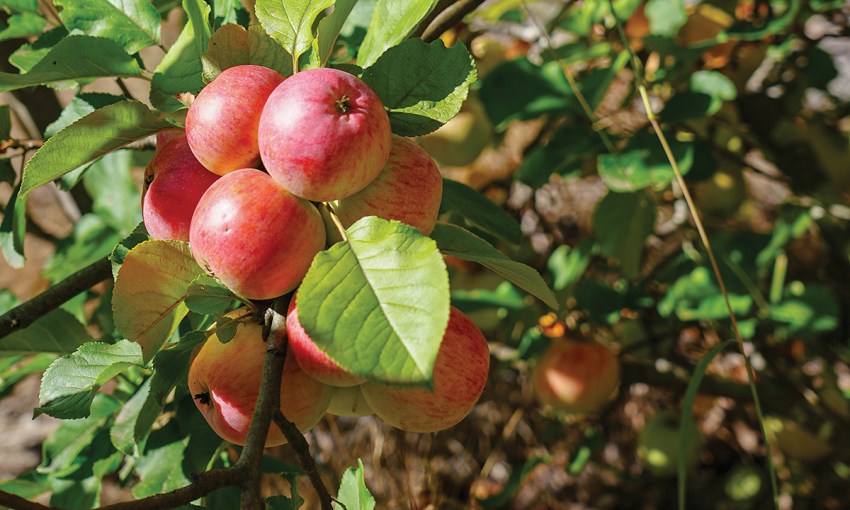 Yarlington Mill If you are into cider making then this is the apple for you. First found growing out of a wall by the water wheel at Yarlington, North Cadbury in Somerset during the late 19th century, this heavy cropper bears smallish fruit. The juice is rich with lots of good tannins, sugars and acidity. Ripens late March to April.

To find these and loads more ready-to-plant heritage apple trees, drop by the Mylor Heritage Orchard stand at the Uraidla Market, open on the first and third Sundays of each month. Or, for more apple information, visit rarefruit-sa.org.au