With little in common other than their postcode and a desire to grow things, a group of inner-city residents of all ages has discovered a profound sense of connection through gardening. 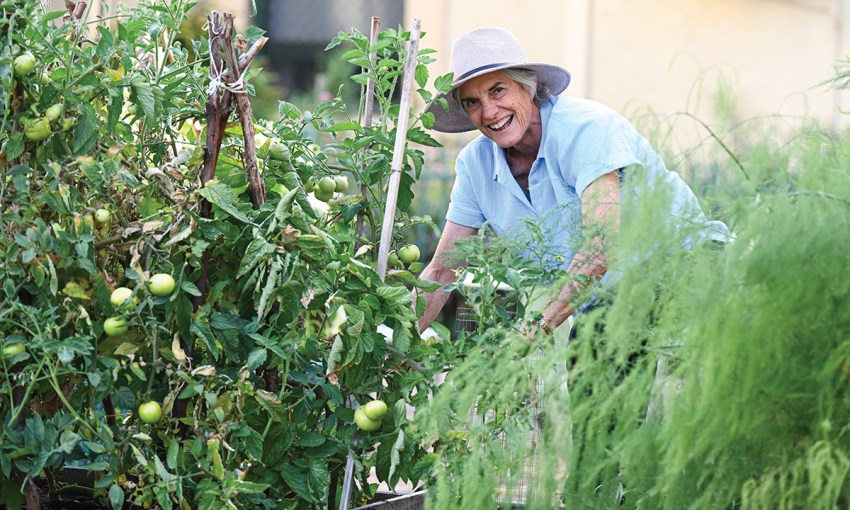 Kate Eatts tends to the tomatoes in the community garden.

Previously of the Eyre Peninsula where she lived on a farm with a large garden, retired teacher Kate Eatts uprooted and moved to Kent Town about a decade ago, trading wide-open rural landscapes for the busy main roads and apartment buildings of Adelaide. Although the parklands are close by, Kate now has limited space to grow things at home.

“I grew up and lived most of my life in the country, where saying hello to people as you walk down the street is just what you do. When the Kent Town Residents Association (KTRA) started up, I was interested in joining. Fortunately for me, one of their aims was to start a community garden,” Kate says.

“I’ve only been here about 11 years, whereas David Shores has been here for 35. David built our garden beds and is an active gardener.”

The group came together in 2019 with the objectives of setting up verge gardens, planting trees and finding a location to start a community garden.

“Many people in Kent Town don’t have the space for a garden. That is one of the impetuses for a community garden – a place for people who want to grow their own veggies but haven’t got the space. There’s a big movement happening in Australia,” says Kate.

However, in such a small suburb, the group was having trouble finding a spot for their garden until they struck up a partnership with the South Australian Country Women’s Association (SACWA), located within a historic building on an acre of land on Dequetteville Terrace.

Built in 1861 and purchased by the ladies of the SACWA in 1950, the building is now used for the association’s gatherings and also offers short-term accommodation, both for SACWA members and the public. The grounds feature a beautifully-kept front garden but it was the humble courtyard to the rear that was of interest to the community group.

“It was lucky that we found this location, otherwise I don’t know what we would have done – we really struggled to find somewhere that was accessible for the community,” Kate says.

The group has transformed the courtyard by adding garden beds made of recycled timber pallets and growing vegetables and herbs with companion plantings of nasturtiums, marigolds, alyssum and daisies.

Although modest in size, the garden beds are prolific producers of spinach, capsicums, mini eggplant, chillies and even asparagus, which is “going gangbusters”. Tomatoes and strawberries have been great in previous summers, but were less productive this past season.

When everyone turns up for a working bee, it’s David’s dog Molly who is most popular. “Molly’s a feature, she’s a bit of a superstar,” says Kate.

The garden’s success shows that you don’t need a large space to establish a community garden. It’s the perfect size for a few people to be busy in, without being overwhelmed, and members always seem to go home with plenty of produce.

“It’s amazing what you can get going in such a small space. Our little garden beds restrict us in a good way; instead of having a great heap of spinach to harvest, there’s just enough. It’s short-term and usable rather than having to make passata for three nights because you have too many tomatoes,” says Kate.

“There’s something about being with people while you’re physically doing an activity; chatting while you’re gardening. We’ve always got something to talk about.”

Kate says the group is hoping to find another location in Kent Town to start a second garden. “It’s about the pleasure of being outside and working in the garden,” she says. “Even just coming here to stand around watering and looking at what’s growing is nice.”

SACWA state president Davina Quirke says the relationship has been mutually beneficial, transforming the courtyard into a productive green space that is enjoyed by association members and country people who lodge at the SACWA.

“The association is all about friendship, whether you’re in Ceduna, Mount Gambier or Pinnaroo and everywhere in between. However, even though our building’s here in the city, we weren’t really knowing the locals, so the community garden has brought us together,” says Davina.

People from distant rural areas often utilise the SACWA accommodation while they are attending medical appointments in the city and can sometimes be seen sitting in the courtyard reading a book. Anyone is welcome to pick some of the produce.

“It’s a lovely relationship,” says Davina. “This space was previously just a thoroughfare to the back doors of the building, so it’s invigorated our home here. Our members will ask if they can come and pick something, such as basil for their tomato sauce.”

KTRA member Amy Kane moved to Kent Town about a year ago with her partner, daughter Ryan and son Reggie, swapping their home in the suburbs for a low-maintenance townhouse.

“We had only recently moved in when Reggie and I were walking around the neighbourhood one day and saw a sign for the residents’ association. Being of a social work background, I’m conscious of how important it is to be a part of a community. I really wanted to be part of creating that change and making the area better for everyone to live in. That was where it started for me,” says Amy.

“As a busy, full-time working mum, maintaining a big back yard and veggie garden wouldn’t necessarily be something I’d be able to do. So having a community garden with others chipping in makes it possible.

“I love it, but I think Reggie gets even more out of it than I do. He loves watering gardens and playing with dirt but also gets to meet other people in the community. They’re teaching him really important lessons about creating friendships and connecting with people who will look out for him.

“Sometimes when we’ve picked strawberries, they don’t even make it home because they’re eaten as soon as Reggie gets hold of them.

“Most people would probably assume that if you live in a high-density city area, there wouldn’t be much of a community environment. But I’ve found it to be the opposite: people seem to be more connected. It’s interesting from a social perspective; the garden definitely brings people together.”