Growing flowers for the bloom boom

From the potato fields to native plants, this Adelaide Hills business has been flourishing as local demand for their cut flowers grows. 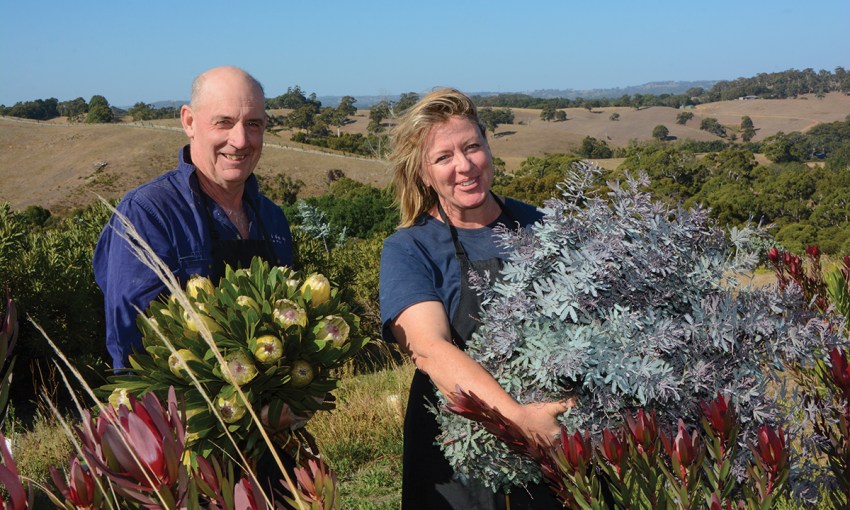 Des and Ange Kidman enjoy the social aspects of flower farming – a contrast to their former life growing potatoes.

On Des Kidman’s first day at the Adelaide Hills flower farm he and his wife Ange had purchased, he took a phone call from a customer asking what type of flowers they had available that morning.

“Pink ones and red ones” was about all the detail he could muster. He’d never seen a protea. The pair were no strangers to selling flowers, but these varieties were completely new to them. Ange had to label the buckets with the flowers’ names until Des became familiar with what was what.

When they were married, Des was employed by Ange’s father on his potato farm at Mount Gambier. A few years later, they expanded, moving north of Parilla in the Murray Mallee.

The property happened to have a 16-acre Geraldton wax plantation. Ange, a trained nurse, was too far from a hospital to work, so she took over the flowers.

“We did that for about six years and found the thing we loved most was growing flowers, and potatoes became too hard,” Ange says.

“It was too hot, too salty and too windy on the particular block we were on. We had a three-year-old at the time and we were worried he’d become lonely, so we decided for his education and wellbeing – and ours – to have a look at some smaller blocks of land closer to Adelaide.”

Des and Ange initially went to visit the owners of a Balhannah native flower planation for advice and ended up buying it. Twenty-one years later, Kidman Flower Co is a flourishing business.

They moved to the property with their toddler and newborn, and a mortgage they say they could barely afford. It was spring and the fields were full, so it was all hands on deck.

Then, the September 11 terrorist attacks happened. The business was half export in those days and orders ground to a halt overnight.

“Half the flowers at that point were going into the Sydney wholesale market, so at least that kept going, but then everyone else in Australia that had been exporting was dumping into that market so no money was being made,” Des explains.

The couple realised that if there were going to survive, they had to make changes.

“Looking back – as terrible as that time was – all small business needs to get to a moment like that, where you learn to understand your business and how to safeguard yourself,” Des says.

“What September 11 did was make us realise that the one part of our business that was bulletproof was domestic.”

The couple abandoned all exports and took five years getting their Australian sales to where they wanted. In subsequent years, they’ve reduced interstate sales, dropping the Sydney market altogether because they didn’t have enough flowers to spare after local orders.

“We’ve become prouder of Australian flora and they last so much longer. Also, it’s not so hard on the planet – flying flowers around is insane.

The business was tested once again by COVID and Des was steeling himself to take another financial hit, but the opposite happened. As people embraced local and wanted to show love to friends and family they couldn’t be with in person – flowers were the answer.

In the early days of the business, they took their product to the Stirling Market to do something Ange had seen in Paris – flower arranging on the street. Customers couldn’t get enough and they no longer need to make the trip to the market. Shed door sales and workshops held at the property have been growing in popularity, so much so that a year’s worth of the monthly workshops sold out at the beginning of the year. They added more, which also sold out.

Next year’s workshop dates will be announced in August, and they’re expecting the same enthusiasm. 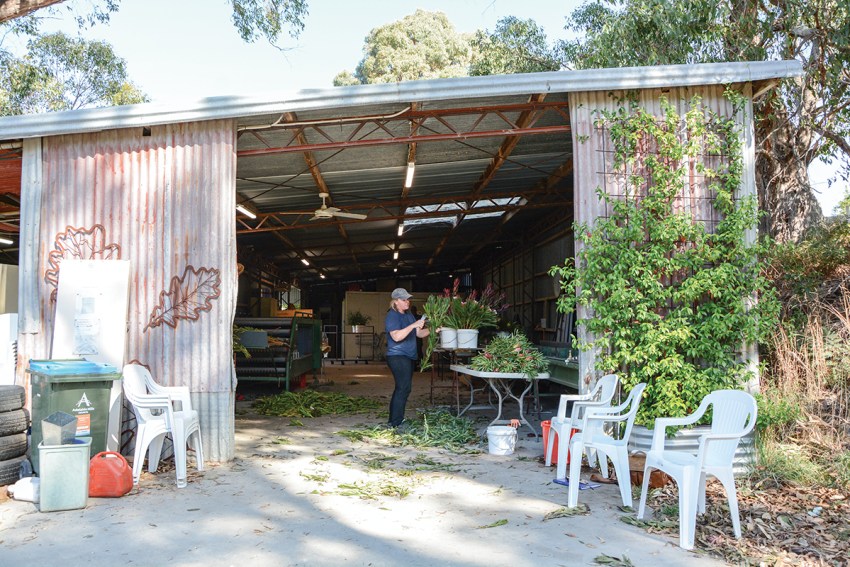 It’s with good reason – the three-hour event includes picking your own flowers from the plantation, an indulgent morning tea, masterclass with a glass of bubbles and finally, creating your own bouquet.

As the machines in the shed buzz, cutting off stems and bunching flowers together along a conveyor belt, Des and Ange chat companionably. Ange says there’s a fair bit more glamour to flower farming compared to potato farming, but it’s the social aspect that she loves most.

“You’re on foot walking up and down each row of protea and you get to chat.” 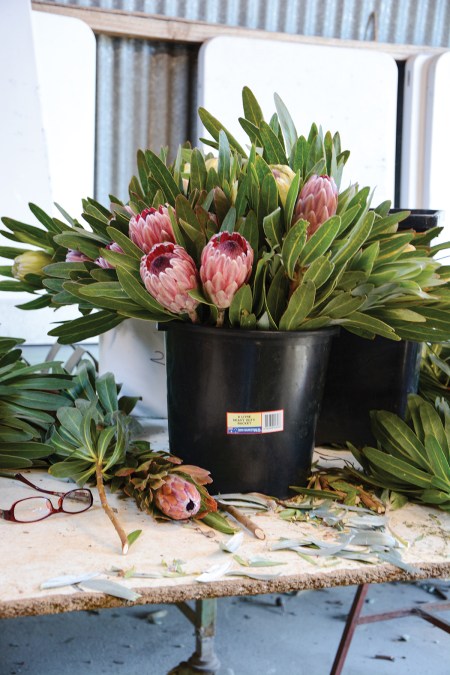 There are about four hectares of protea to go through, and 12 hectares of other plantings, including leucadendron, varied eucalyptus species, kangaroo paw and waratah.”

Their staff work on picking days – Mondays and Thursdays – when they’re out in the plantation from 8.30am until 11am. At that point the talk turns to of which flavour of muffin Ange has baked for them that day.

They’re staff are usually university students keen to earn a bit more money or retirees who enjoy getting out on the land and keeping fit.

As Ange and Des call their farewell, their arms are full of bunches of native flowers ready to be chilled, off to a local market that has well and truly grown to love them.