In the garden: Finding zen at the Himeji Garden

Meet the gardeners who tend to a peaceful Japanese sanctuary in Adelaide's southern park lands. 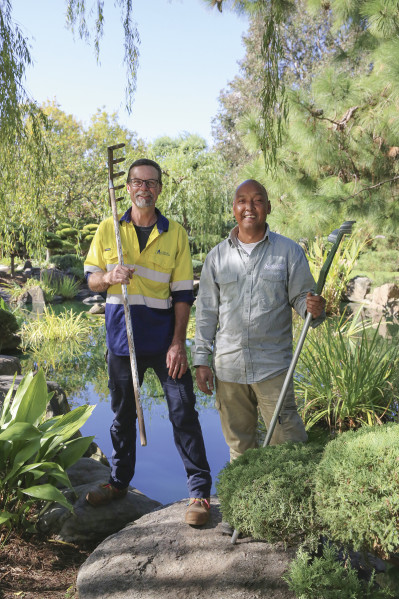 Some would think looking after the beautiful Himeji Gardens in the South Parklands would be an honour, rather than a chore. Head gardener Jad Donaldson tends to agree.

Jad and horticulturalist David Bond are charged with the job of keeping the gardens looking their best and making sure they reflect all the attributes that are expected of such Japanese gardens. A gift from Himeji, Adelaide’s sister city in Japan, the garden contains features that are of profound cultural significance to the Japanese people. The gardens were opened 34 years ago, in 1985.

“Everything in the gardens has a spiritual meaning and place, from the ponds to the trees and other plants, even the rocks,” says Jad. The garden blends two classic styles. The first is the “senzui” (lake and mountain garden), where water and the imagination create images of vastness and grandeur. The second is the “kare senzui” (dry garden), where rocks and sand evoke the presence of water.

David Bond enjoys starting the day preparing the gardens for visitors. “Watching the sunrise across the gardens, the reflections in the pond and listening to the birds all make it an absolute joy to be here,” he says.

“One important aspect that some people recognise is that everything featured in the gardens is condensed to fit into the small space of the gardens. But what most people don’t realise is that the trees are carefully pruned to develop shapes which evoke feelings,” says David.

The pruning process is quite meticulous, carried out from May right through to August each year. “The way you prune in a Japanese garden is quite different from the traditional “Western” way. It is not just about the overall shape and growth of the tree but how the branches relate to each other. You slow right down when doing the job and look carefully at what you might be able to achieve in making the tree more sculptural.”

Over the past five years, the gardens have been restored to their original plans and both Jad and David are very happy with the current look. The black pines are particularly stunning, thanks to the way they have been pruned and sculpted over the years. It is believed that the Himeji Gardens have the most black pines together in a single garden in Australia. Other popular varieties include a range of conifers and cypresses, nandina and bamboos.

“The phrase ‘everything is what it is not meant to be’ is used to describe the gardens, which essentially means it is left up to an individual’s imagination as to how they see the gardens,” says Jad. He says there are many people who visit regularly, to just walk through or sit down and absorb the serenity, while international tourists visit the gardens every day.

In the south-east corner of the gardens is the traditional tea house bordering the dry garden, in which the council says “two billion grains of sand are raked regularly”. The raking is meticulous, but does not follow any strict plan. The gardener is entrusted with the job of creating a new pattern when it is time for a change. “People respect the hard work that is done to create the patterns in the sand, but the ibis and other birds don’t,” David says.

The pond is a key feature of the gardens and contains a few goldfish. Apparently, all the exotic fish sent by the Mayor of Himeji for the opening were devoured by birds soon after they were released into the pond. David suggests visitors to the gardens look out for two new residents in the pond: a big goldfish and a turtle that he rescued when Rymill Lake, in the East Park Lands, was drained.

Himeji Gardens are free to enter every day of the year, opening at 8am and closing at 5.30pm, or 4.30pm in the colder months.

With WOMADelaide a week away, associate director Annette Tripodi talks about growing up in Campbelltown, her love of music and bottling the magic of WOMAD.

Former Territorians Katie and Greg Ambrose-Pearce are selling their $2.25 million home at Hazelwood Park with space for hosting pool parties, family living and parking for a small fleet of vehicles.

Out & About: Kept salon opening

Guests got a sneak peek into new Parkside salon Kept for the opening of the space, designed specifically with men in mind.