The Garden of Health: Natural healing

Located within the Adelaide Botanic Garden, the Garden of Health delivers an important reminder that the natural world holds everything we need to stay well.

They might not be as photographed as the giant fig trees, as grand as the bicentennial conservatory or as well-visited as the Waterlily Pavilion, but in one corner of the Adelaide Botanic Garden grows a patch of humble pink flowers that are arguably more important than all of the garden’s other exhibits.

Despite its pretty blooms, the Madagascar periwinkle (Catharanthus roseus) can be extremely toxic if consumed and yet has been developed into medicines that treat cancerous diseases such as childhood leukaemia and Hodgkin’s lymphoma.

Also used to treat various ailments in traditional Chinese and Indian medicine, this mighty little flower is cultivated in the Garden of Health – an area of the botanic garden established about 10 years ago to demonstrate the important role that plants play in human health.

In the wild, the Madagascar periwinkle is an endangered plant because of habitat destruction to make way for agriculture, but it also makes a great ornamental plant because of its hardiness in dry conditions.

“Many plants become extinct every year and some of those plants could be the saving grace for various diseases. That is very much a story that I think needs to be told,” says John Sandham, Botanic Gardens of South Australia’s Collection Development Officer.

“Plants have supplied 80 per cent of our medicinal capacity in the world today. If it hadn’t been for those plants, we wouldn’t have many of our drugs and medications. So much of our lives are made up of plants and most people don’t even think about it.”

Medicinal uses aside, John points out that most people’s day starts with them waking in their cotton or bamboo sheets, showering with soaps made with botanical extracts, eating breakfast and drinking coffee made from plants and then starting their car with fuel derived from fossilised plants.

The Garden of Health serves as a reminder of how inextricably linked we are to nature, from the Neolithic period to present medical science and pharmacology. More than 2000 plants show the diversity that has assisted in healing the body, mind and soul for thousands of years.

Native Americans used the barberry bush’s edible berries to treat scurvy as, although sour, they are rich in vitamin C and have been studied in a number of modern clinical trials. The leaves of the tamarillo tree were warmed and wrapped around the neck to relieve sore throats, while pods of golden shower have been used in the treatment of malaria, blood poisoning, diabetes and even anthrax.

Although ancient naturalists did discover viable medicinal uses of plants, many were misguided. Roman scholar Pliny the Elder recommended that rue be used as an antidote for snake bite when combined with the poisonous shrub oleander. In European legend, rue was believed to have the power to repel a mythological serpent, the basilisk.

The Garden of Health is separated into two sections: the southern side is the Garden of Healing and the northern is the Garden of Contemplation, demonstrating how plants, green spaces and wholesome foods affect human psychology and wellbeing. It’s also a nice place to just sit and relax as you listen to the trickle of the central fountain. Indigenous and exotic plants show how nature can provide a sense of belonging.

The Garden of Healing draws inspiration from the Padua Botanic Garden in north east Italy. Established in 1545 alongside the city’s hospital, Padua’s garden is the world’s oldest and most important herbarium and library. One of the earliest ways plants were classified was not what families they belonged to, but what they cured. In a similar way, the Adelaide Botanic Garden was built close to the city’s health precinct. 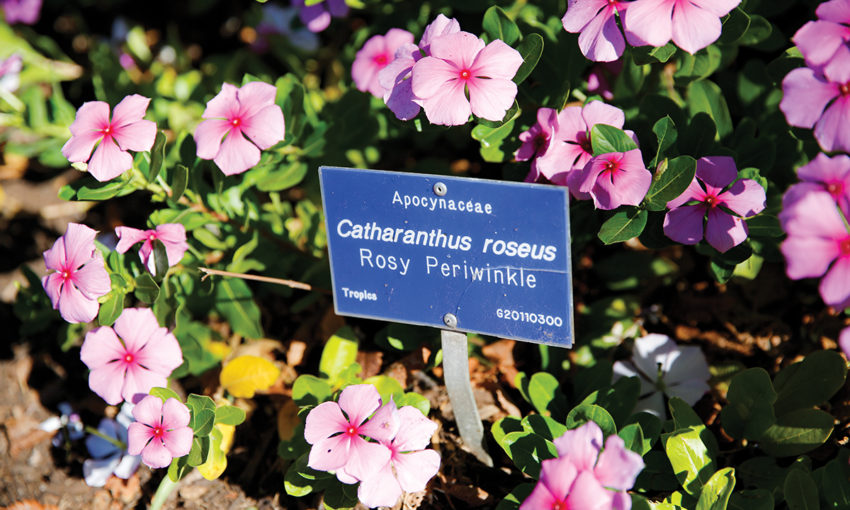 “Indigenous hunter-gatherers across the world were tremendously aware of their environment and their plants and that richness was handed down through storytelling. It was a tremendous wealth we had,” John says.

John says nature is the greatest chemist and many compounds are first discovered in plants before they are then synthesised in a laboratory. Interestingly, often it is poisonous plants that have been discovered to possess medicinal qualities which are then formulated to treat illness and disease.

“A lot of people know they like plants, but they don’t know exactly why they like them. Before we started building cities and living in houses that removed us from the real environment, we had an affinity with plants. Now, not only have we lost that affinity, we’ve lost the understanding of what those plants actually produce for us,” John says.

“The Garden of Health can open your eyes. Sometimes we are so disconnected from the natural environment we mightn’t realise that without plants, we wouldn’t survive.”

This story first appeared in the May 2021 issue of SALIFE magazine.