Step into this unusual Adelaide Hills garden and be transported to a tropical rainforest – open this weekend, August 21 and 22, as part of Open Gardens SA. 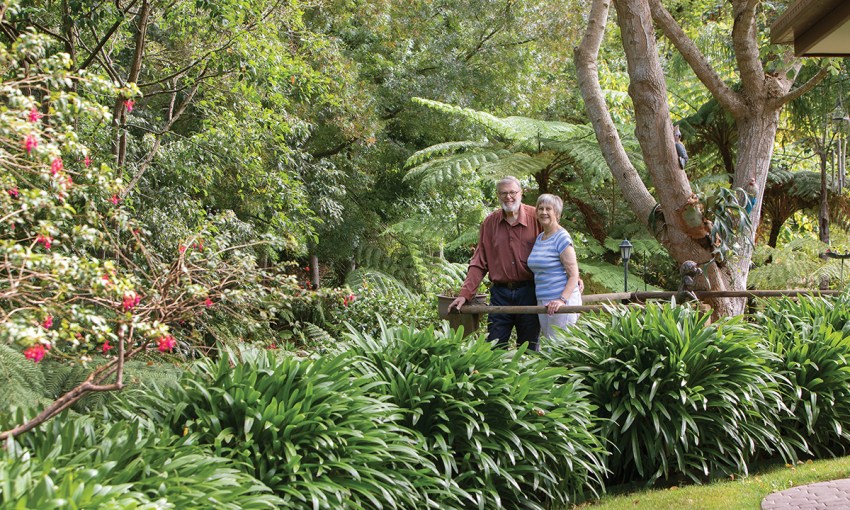 When Reo and Barbara Metzger moved to Adelaide from Namibia, Africa, in 1989, running water in a garden was a complete novelty to the couple.

They saw a trickling stream running through a beautiful Stirling property and knew they wanted to make the area their home.

The garden had the key ingredient of the creek, but that was about all it had going for it at that stage. In the intervening years, Reo and Barbara have transformed the 4000 square-metre property into a tranquil oasis.

“When we moved here, there was nothing except willow trees and blackberries,” Reo says. “We started clearing the blackberries and left the willow trees, but quickly found out they were dropping limbs and breaking because they were hollow.”

Over the next decade, the mammoth task to remove the trees was carried out – some of which were up to 20 metres tall.

When the couple first rolled up their sleeves to get to work on the garden, there was no real plan in mind and they let the terrain guide them.

“Because it’s in a valley, it’s undulated, so we started just making contours to make it a bit more easily accessible and we developed it from there,” Reo says.

The bottom of the garden becomes quite swampy when wet, so a boardwalk, built by Reo, provides access down to the water. Then, in went the footpaths that allow for easy wandering through the whole space.

Slowly but surely, the Metzgers began familiarising themselves with the land and the intricacies of the microclimates that exist on the property. The camellias came first and they’re still a major feature, with a mass planting of nearly 60 plants.

Joining the camellias are blooms of azaleas, hellebores and magnolias – mass planted for maximum impact. On a smaller scale, Reo’s latest hobby is the brugmansia – or angel’s trumpets. “They’ve got a huge flower about 15 centimetres long and we’ve got them in pink, yellow, double white and purple,” Reo says.

“They’ve got such a lovely, heavy perfume,” Barbara says.

The flowers bloom around March and April, creating a spectacular show, although the garden provides something special all year round.

The bulbs show off in spring, with bluebells, daffodils, anemones and freesias popping up. Then in summer, the hydrangeas are out in full force. And, of course, it’s a typical Hills garden ablaze with oranges and yellows come autumn.

At this time of year, the camellias and hellebores take the spotlight. Vibrant green hues dominate, with a canopy of about 70 tree ferns – some easily up to three metres tall – creating a rainforest-like atmosphere and a perfect covering for the hellebores, clivias and other shade-loving plants.

The garden is watered through an intricate sprinkler system sitting atop the ferns, fed from the spring by an electric pump.

“Because the creek runs through our property, I’ve put in stone walls and we get a lot of waterfalls during winter,” Reo says.

“They really are spectacular and the sound is so nice,” Barbara adds.

Artistic elements sit among the plants in the form of sculptures, both created and purchased.

The couple has picked up numerous pieces from roadside craftspeople in Africa, favouring detailed bird sculptures made of iron.

There are also three sculptures made by Reo himself, after he retired eight years ago. A former farmer at their previous property near McLaren Flat, with a shed full of hardware, Reo decided to make use of the materials that would otherwise sit and gather dust.

“I can weld and I had lots and lots of bolts and nuts, and knew I’d never use them, so I just started.”

The result is a whimsical tower of metallic tendrils, topped with seemingly floating cubes. Another of Reo’s pieces is a pair of snow tyre chains – for which he’s found no use in South Australia – fashioned like flowers. His third piece is a “tree” made from nuts, bolts and aluminium plates.

The couple operates a B&B on the property and in front of the guests’ accommodation, Reo has built a balcony that overlooks the whole garden.

“It’s not a structured garden as such,” Barbara says. “Ours is a garden that develops itself – we see a plant and we try it out. If it grows, it stays.

“We’re not finicky with textures or colours. There’s no real colour theme, but it flows. If there’s a sunny spot, we’ll grow succulents. If it’s shady, we’ll put shade-loving plants in. If it’s an area that doesn’t get frost, we’ll try a tropical plant.”

There are more plants preferring shade under the grand elms – the only green life on the property not dug into the earth by Reo or Barbara – and a bench on which to sit and enjoy the hard work they’ve put in.

“Being in the garden is the best thing you can do,” Barbara says.

“You go there, you feel like you’ve accomplished something. You feel good, satisfied.”

The Metzgers’ garden will be open to the public as part of Open Gardens SA on August 21 and 22, 2021. opengardensa.org.au