Fit for a family

Far from being a showpiece, this award-winning extension is all about creating a home that fits the needs of a blended family.

Finding a home large enough to accommodate a blended family of six people, including four teenagers, was always going to be a challenge.

But this couple was determined to find just the right home with the space, privacy and comfort to accommodate their combined brood.

They began looking at five-bedroom homes but were left disappointed when they missed out on several at auction. So, the couple then set their sights on a “renovator’s delight” which they could redesign to suit their exact needs. Their must-haves were five bedrooms, a variety of living zones, a pool and plenty of light, warmth and atmosphere.

When they found a dilapidated sandstone villa in Unley, they knew they could work with the sturdy old bones to create their perfect bespoke home.

The couple both work in finance and lead busy lives, so the idea of a major renovation was overwhelming, particularly as neither of them had undertaken anything of that scale.

“I hadn’t even looked at a bathroom tile in 20 years,” the owner laughs. “We did take photos of some of the hotels we have stayed in around the world, with interiors we that we liked, but that was about it.”

Determined not to rush things, the couple planned a 12-month design period and a 12-month build. However, the design phase blew out to 18 months when they changed architects mid-way through the project.

“About six months into the design we felt something was wrong with the back section, it just didn’t feel right,” she says. “We went to a friend’s house in Beaumont and we loved their place. We realised our design was 60 per cent there but just not quite right. We couldn’t get the language right, so we just stepped back and reassessed.”

The couple engaged local architect Rolf Proske who offered tips, such as using louvred windows for better airflow, and he also designed the tilt rotation of the extension roofline to maximise the northern light warming up the concrete floor in winter.

Urban Habitats was also employed to design, build and manage the project and the owner credits their weekly on-site meetings with making the process as stress-free as possible.

“Meeting onsite regularly just broke down clunky communication, it was in everyone’s diary and we just had a quick pow-wow on where things were at,” she says. “Jock Merrigan at Urban led the team and we really built up the trust with him. It was nice to walk out of a building process and say I’d actually have a drink with these guys — and we do.”

That connection and communication between builder and client paid off for Urban Habitats, who took out the Excellence in Renovation Award in the over $1 million category in the Master Builder’s Awards 2018.

While it is an award-winning residence, the brief for this project was always to create a comfortable modern home, not a sterile showpiece.

The architectural lines in the extension are intentionally sharp and angled, and some features, such as large aluminium sliding doors, lots of glass and polished concrete could create a sterile feel. However, there are warming elements that add intimacy and atmosphere; elements that reflect the lives and characters of the owners.

One of those key elements is the suspended Ergofocus fireplace by Oblica in the new living space.

“My husband grew up on a block in the Riverland and they used to have an open fire and he would collect wood with his dad,” the owner explains.

“His father passed away last year and the fire is a real connection to his dad, we just love it. I don’t think we move all winter. Just the smell of it links us both to our childhood.

“Who cares about the mess of a real fire, being able to sit by the fire and see the pool outside is just one of my favourite things about his house. It’s good for the soul.”
With Italian heritage, the couple also has an appreciation for the home-grown and lots of greenery.

Another must-have was the inclusion of a backyard veggie patch and edible garden, including lemon and lime trees, cherry tomatoes and a herb garden.

Distinctive Gardens designed the landscaping, beautifully linking the indoor areas to the outdoor, including the continued use of natural materials such as the bluestone used around the pool, a concrete oven/outdoor fire and plant choices that are low maintenance and not too precious or formal.

While this home was designed to bring the two families together, creating zones to relax and retreat was also vital.

These include decent sized bedrooms, each with study areas, a separate sitting room in the old part of the house and a theatre room or “man cave” that was dug out under the home. This large space is another television/living area and also contains the couple’s extensive wine collection held in modular wine rack from Living Edge.

The second fixture choices in the luxurious home have also added warmth and intimacy. The couple enlisted interior designer Antonietta Sofia, from Sofiaa, who they say led them through the process with care.

“She wasn’t pretentious. She was just down to earth and she could talk to both of us even if we weren’t agreeing on something,” she explains. “She has this great skill set of keeping it simple, so we built up that trust quickly with her.

“We both have strong characters and certain tastes but she was great at taking control and directing us without being over the top.”

Antonietta says, aside from the function of the design aspects, the aesthetic was to create an interior that was complementary to the heritage nature of the original villa, maintaining some of the 100-year-old details, but marrying these with the modern requirements of today’s living.

Layers of warmth were added through the clever use of timber, textural tiles and a natural palette of designer furniture and fittings.

“The flooring through the old part of the house was an American oak herringbone floor with a natural finish to the surface and then with the polished concrete slab to the extension, we picked up the herringbone pattern on the kitchen joinery with the natural marble splash back making a statement in the kitchen.

“I love the play of all the natural materials and textures in the old and new part of the house,” Antoinetta says. “There is an honesty to the materials rather than a sense of the manmade, they may not be perfect but this is a good reflection of the house itself, which after 100 years may not be perfect, but it’s still amazingly sturdy, strong and grand.

“This has now been transformed into a classic house that will serve the new wants of this family and see them through in durability and style for the next 20 years.”

This first appeared in the May 2019 issue of SALIFE. 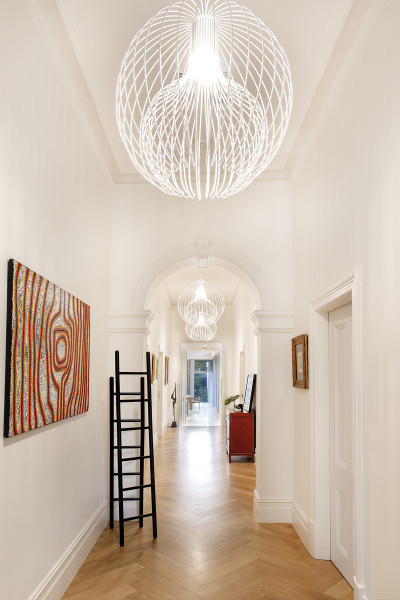 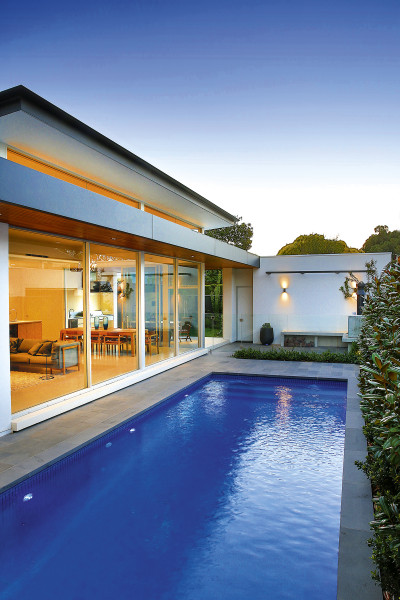