A landmark piece of South Australian architecture on the doorstep of the Adelaide Botanic Garden is expected to fetch more than $2 million when it is sold by expression of interest next month.

The Victorian-style home at 307 North Terrace was built in 1877 by Richard Vaughan – an entrepreneur who established the nearby East End Market after he started selling produce from a trestle in the back yard of the Stag Hotel.

Wine industry professionals Rita and Carmine Alvaro purchased the property in 2013 and spent three years renovating and restoring the home to its former glory. The couple are now reluctantly downsizing from the beautiful terrace home.

“We put our heart and soul into that property,” Rita says. “It’s a bit sad to put it on the market, but we’re empty nesters now so it’s a bit big for just my husband and me.”

The property had been split into one-bedroom apartments some 40 years ago. Rita and Carmine purchased the property with the intention of returning the home to its original floorplan, which better suited their family. “A labour of love,” Rita says.

Because of the location, restrictions on machinery that could be used meant much of the work was done by hand. “It took three years to do and it was hard labour. We couldn’t bring any machinery in and when we started to demolish, materials had to be taken out by hand,” Rita says.

“We tried to keep the style in line with the house and we didn’t want to go too modern. We did try to accommodate for modern life, but keep with the traditional feel.”

The home now contains four bedrooms, three bathrooms and a powder room, Italian marble bench tops, solar panels, original fireplaces, and a basement with a self-contained bedroom, bathroom and kitchen. The basement has its own access and could be used as a separate apartment.

The owners had the floorboards restored, with new plumbing and electrical work, as well as restoration of the staircase and balustrade.

Built from Glen Osmond stone, the Italianate style terrace home overlooks North Terrace and is a stone’s throw from the Adelaide Botanic Garden, Rundle Park and the East End restaurants and cafes of Rundle Mall and Vardon Avenue. The art gallery, museum and universities are within a short walk.

Once part of the Botanic Chambers and Hotel, the building reflects the architectural style from the boom period of the 1860s to the 1880s.

Rita says double glazing and the thick stone walls block the street noise efficiently. “You really forget that you’re on North Terrace before you open the front door,” she says. 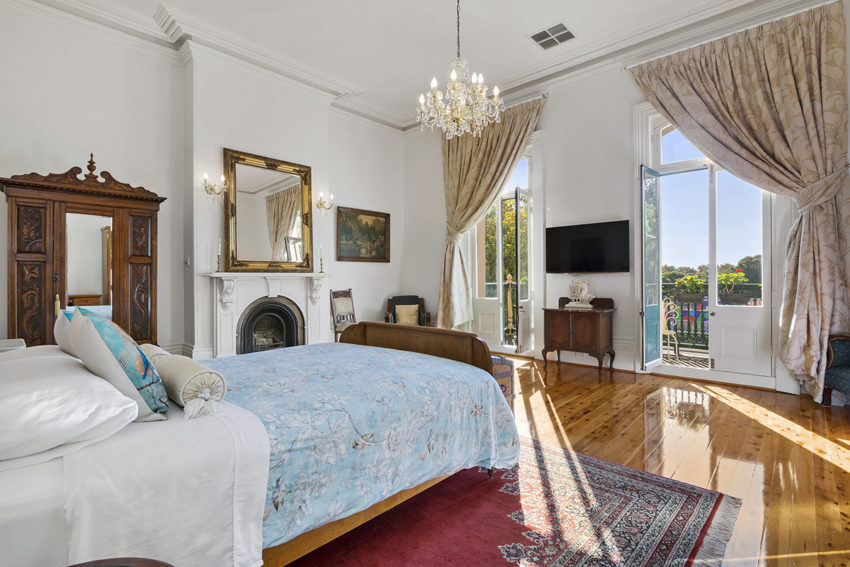 “The position of the home is just amazing – you can walk across the road to the botanic gardens, go for your walks or runs, then there’s the restaurants and cafes – the lifestyle’s amazing.”

The sale is being handled by Tim Thredgold and Melissa Hesketh of Toop & Toop.