The much-loved family home of pioneer IVF specialist Doctor Christine Kirby and her husband Christopher Waldock, this Adelaide Hills lifestyle property has established gardens, a conservatory overlooking a dam and plenty of space for horses and fine cars.

Regarded as an Australian pioneer in IVF and reproductive medicine, Dr Christine Kirby and her husband Christopher Waldock have this week listed their 2.32-hectare Adelaide Hills lifestyle property for sale.

The couple first purchased the land in 1992, when it was nothing more than a sheep paddock with two gum trees, contracting Aldgate-based builders Samalex to create a classically-inspired home.

“We were looking for a change from city life. Our daughter was riding and going to pony club, and I’m originally a country girl, so it was just a great move,” says Christine.

In the late ’70s, Christine was the Royal Adelaide Hospital’s first female surgical trainee. Today, she is an obstetrician and gynaecologist specialising in fertility management at reproductive technology company Repromed. 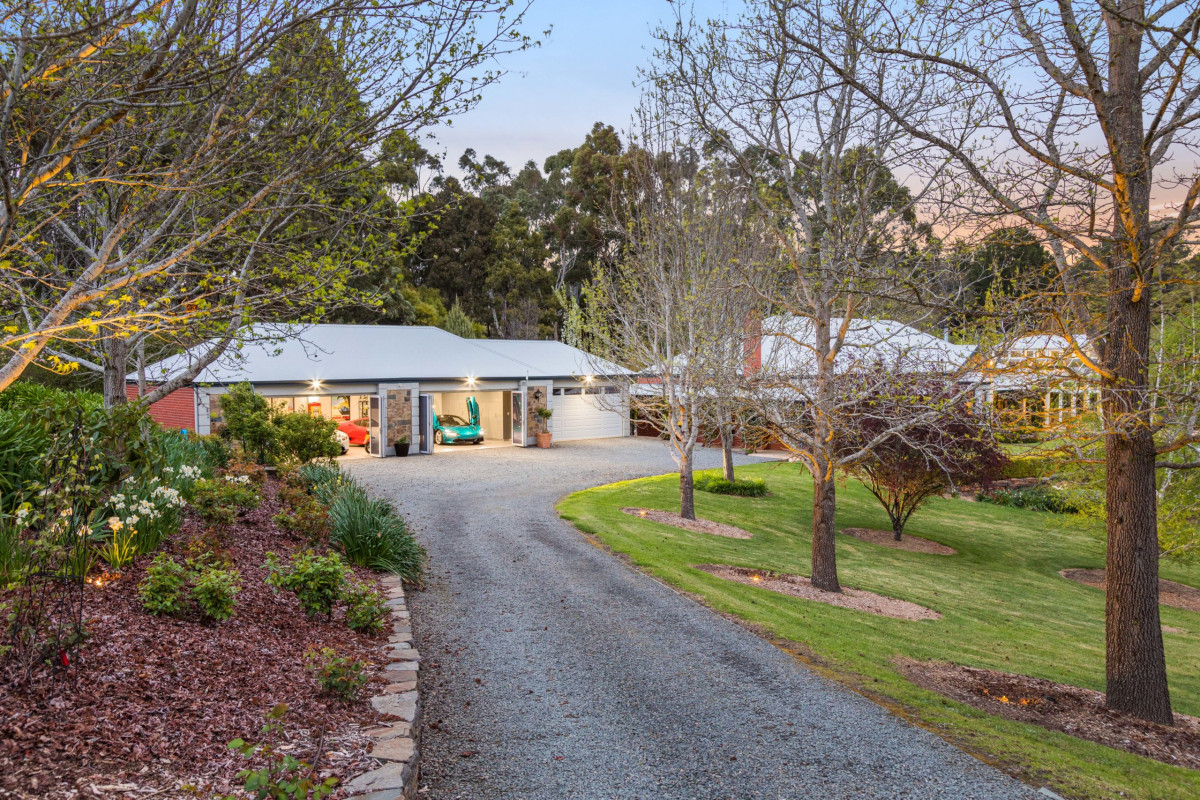 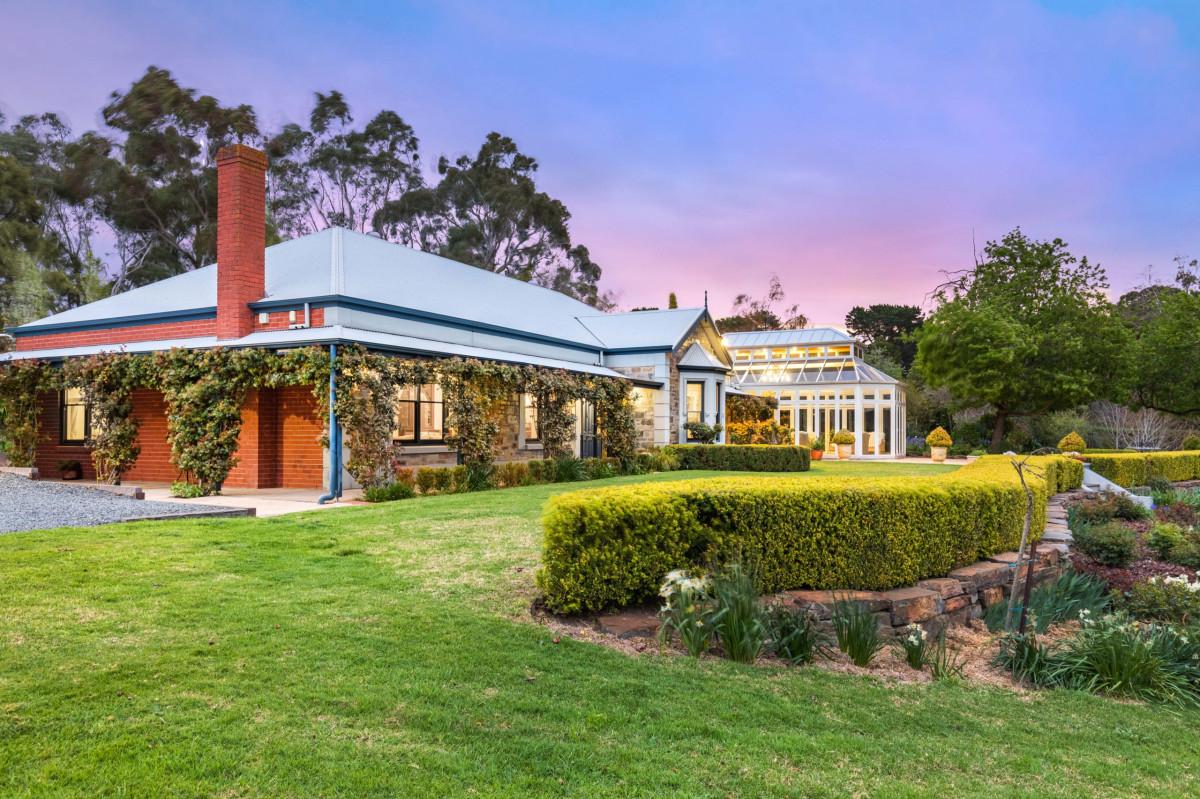 The evolution of the house and land into its current configuration has been a labour of love, particularly the structured Adelaide Hills garden, which the couple has developed over many years.

“Right from the word go I wanted to build a classic Adelaide Hills garden that would be there for future generations to look after,” says Christine.

In 2009, the couple added extensions to the home, with a new conservatory, expanded master bedroom, new en suite and additional garage space, with the property now able to garage 17 vehicles undercover.

The observatory with wood-fired pizza oven is a dream for entertaining, with glass doors that can be opened up to the Hills, or closed off for cosy winter gatherings. 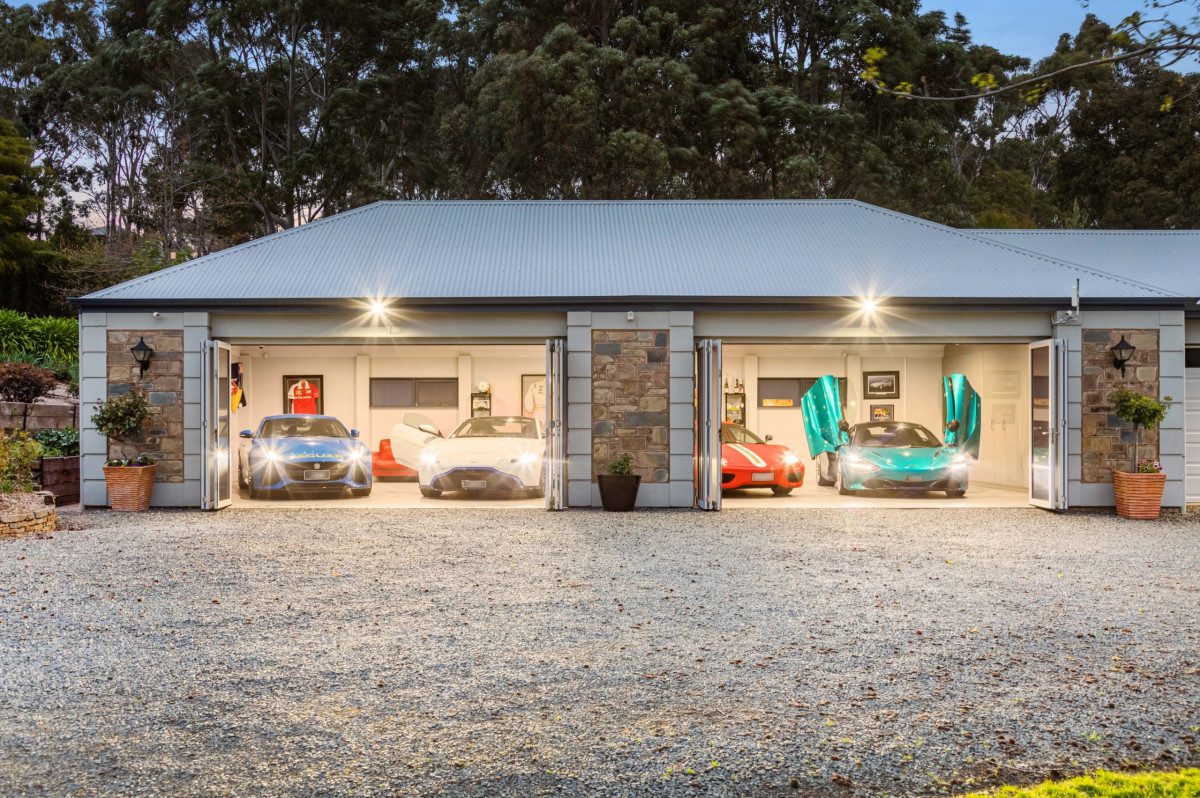 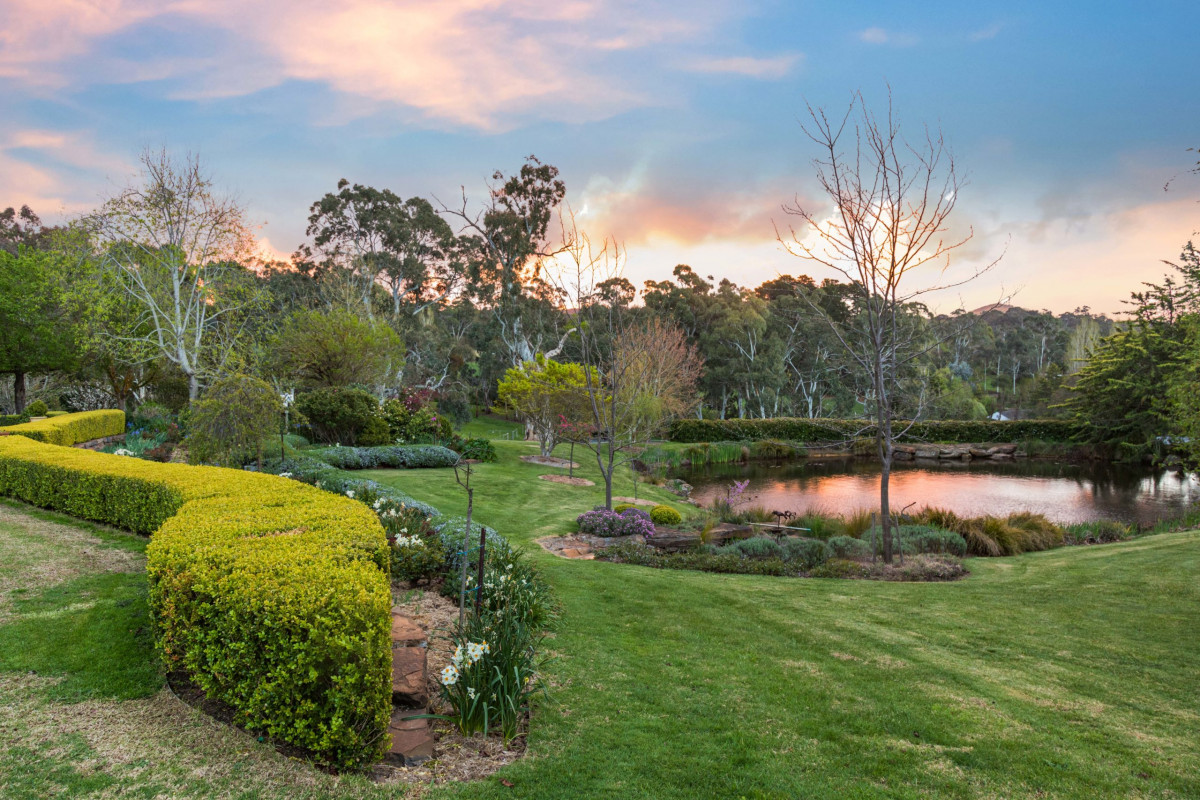 Christopher has only recently retired from his life’s work — the ground-up restoration of E-Type Jaguars.

“He finished his last car about two months ago,” Christine says.

“Over the years he’s probably restored something like 35 to 40 Jaguars. It’s a big job, each restoration is about 1300 hours per car.”

Garaging includes a workshop with electric hoist and five-car showroom. The garage is often referred to as a man cave, but Christine is just as much a motorsport fanatic as Christopher is. 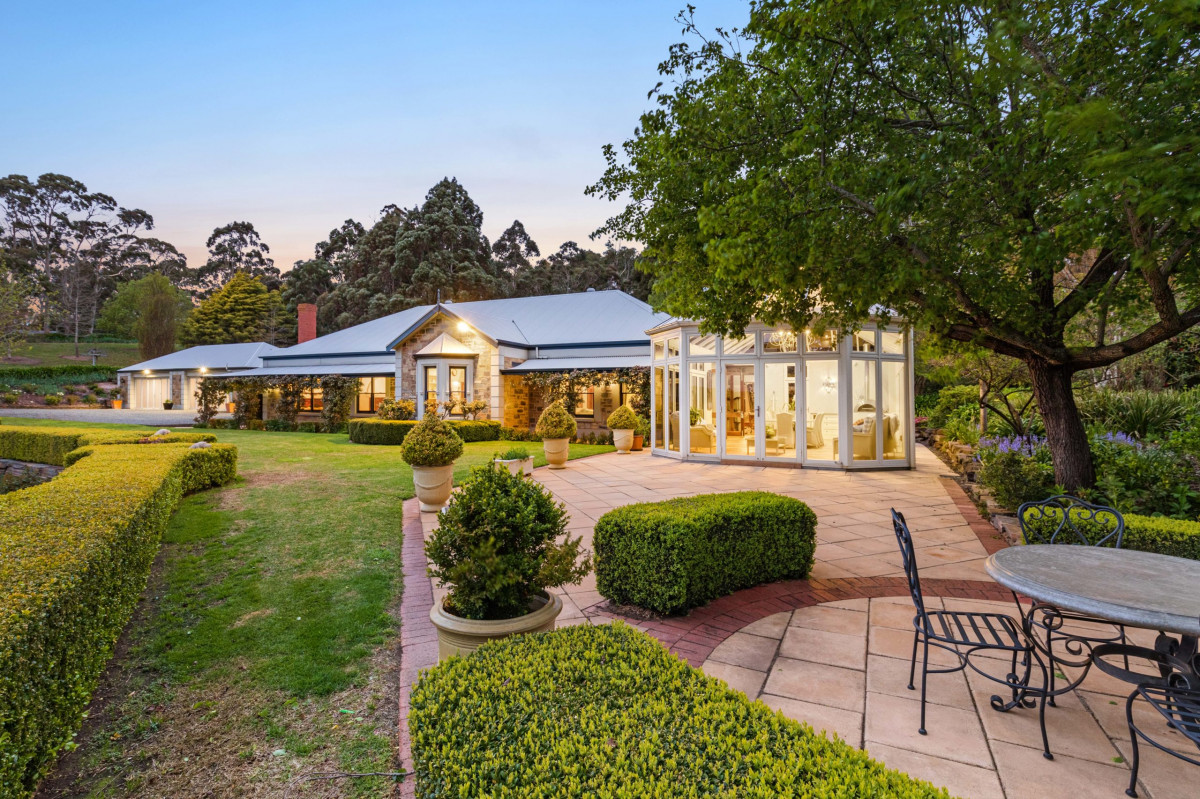 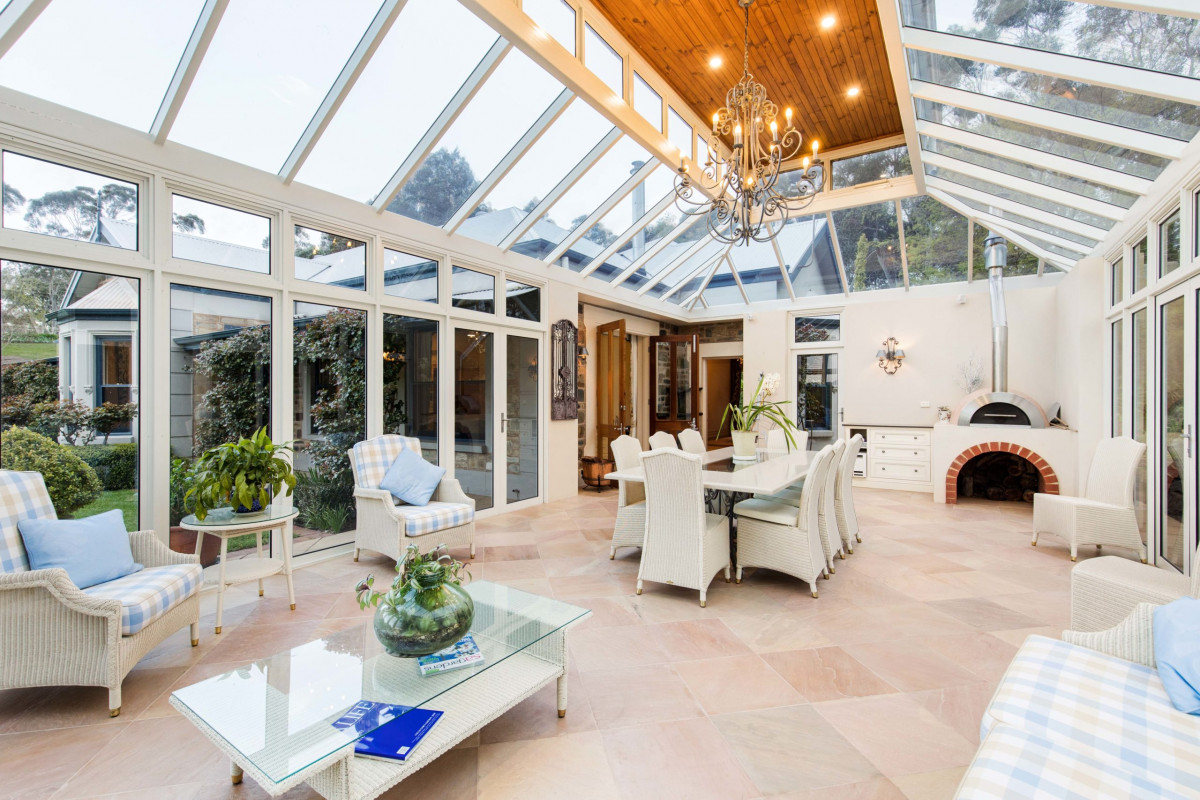 “Chris and I first met down at Goolwa speedboat racing. I was racing my dad’s boat, and he was racing his own,” says Christine.

“We’ve been into motorsport for a long time, both of us equally. We do a lot of tarmac rallying and share a passion for motorsport and cars.

“Some people call the garage a man cave, but it’s a bit more than that – it’s a lovely space.”

Perfect for the automotive enthusiast, the home is also well-equipped for equestrian activities. “The bottom half of the property is where our horse paddocks are, with really nice facilities including stables, a tack shed, and round yard. That would be ideal for someone with children that are interested in horses.” 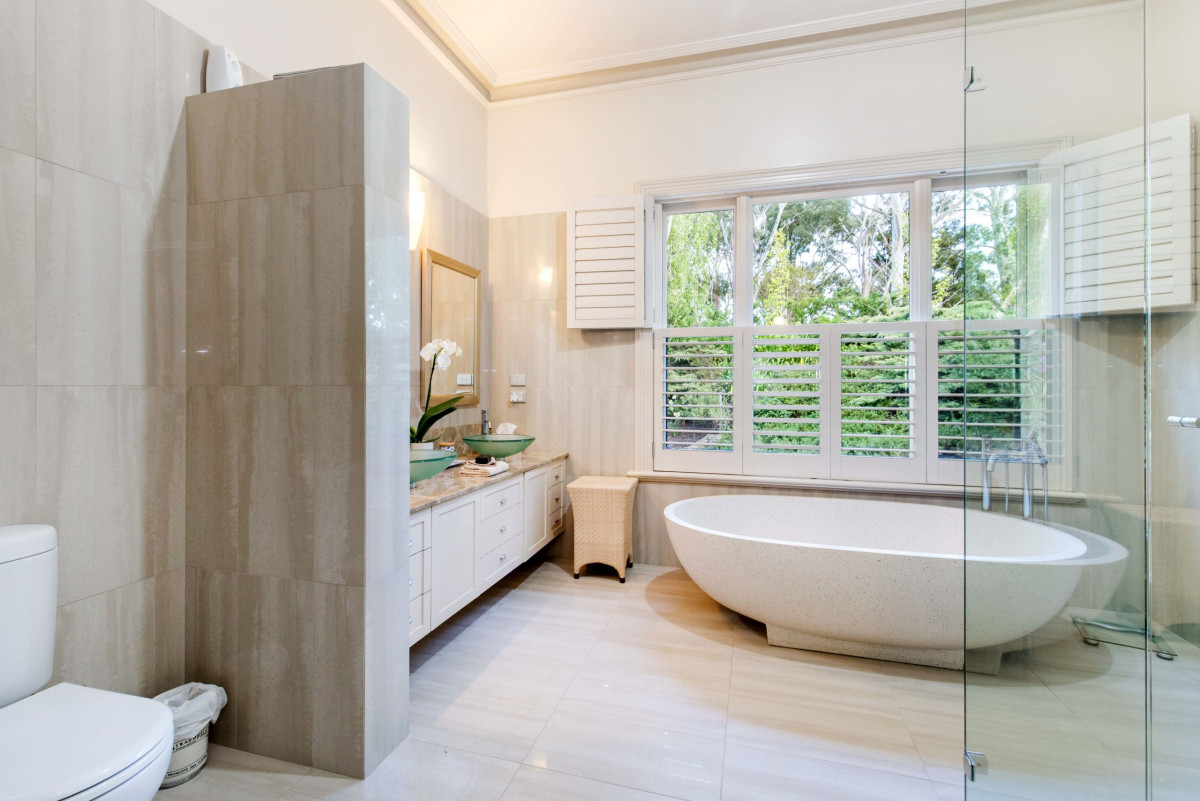 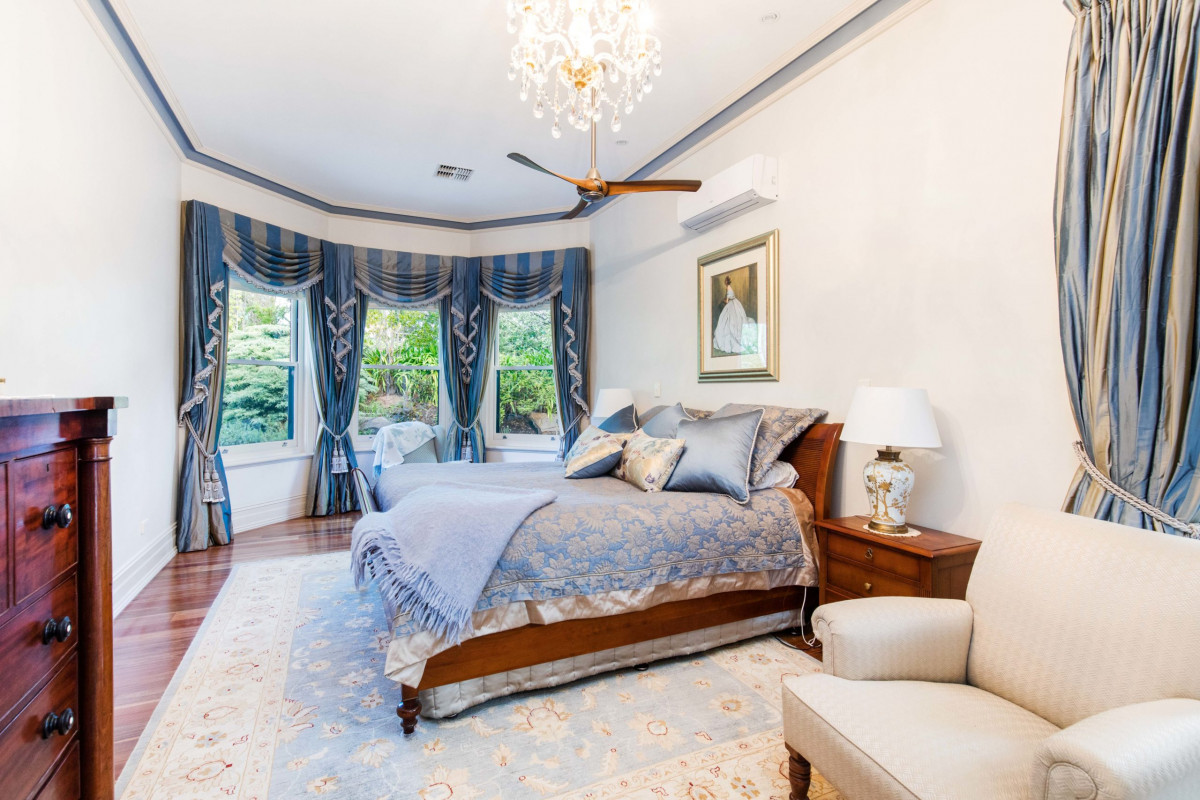 With COVID-19, the couple has been separated from their daughter and new granddaughter in New South Wales. The desire to travel more to be closer to their family is part of the reason for selling.

“We made the decision about three years ago that at some stage we would need to sell, but it’s very hard to put the home on the market. It’s been an absolute labour of love that we’ve seen grow and develop,” says Christine.

Christine is a pioneer in reproductive medicine and one of the first IVF specialists in South Australia. She began working in IVF back in 1981 and has lost count of the number of families she has worked with over the years. 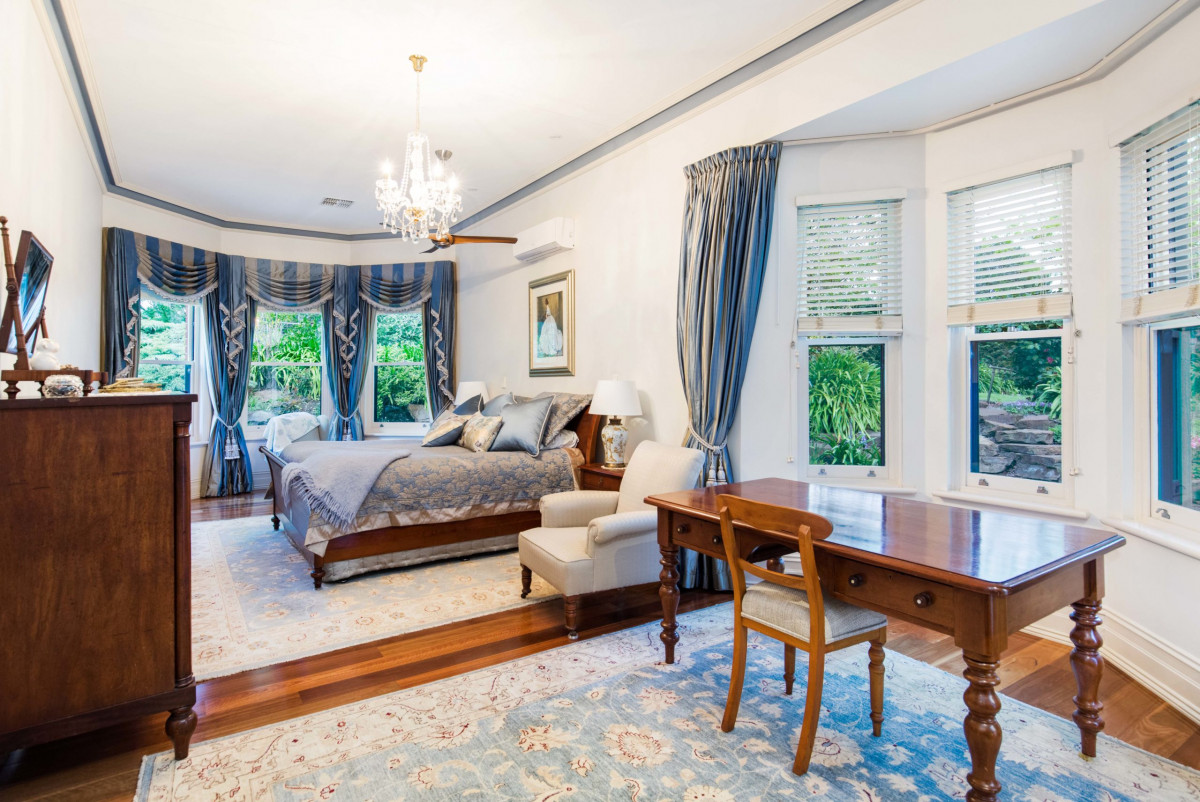 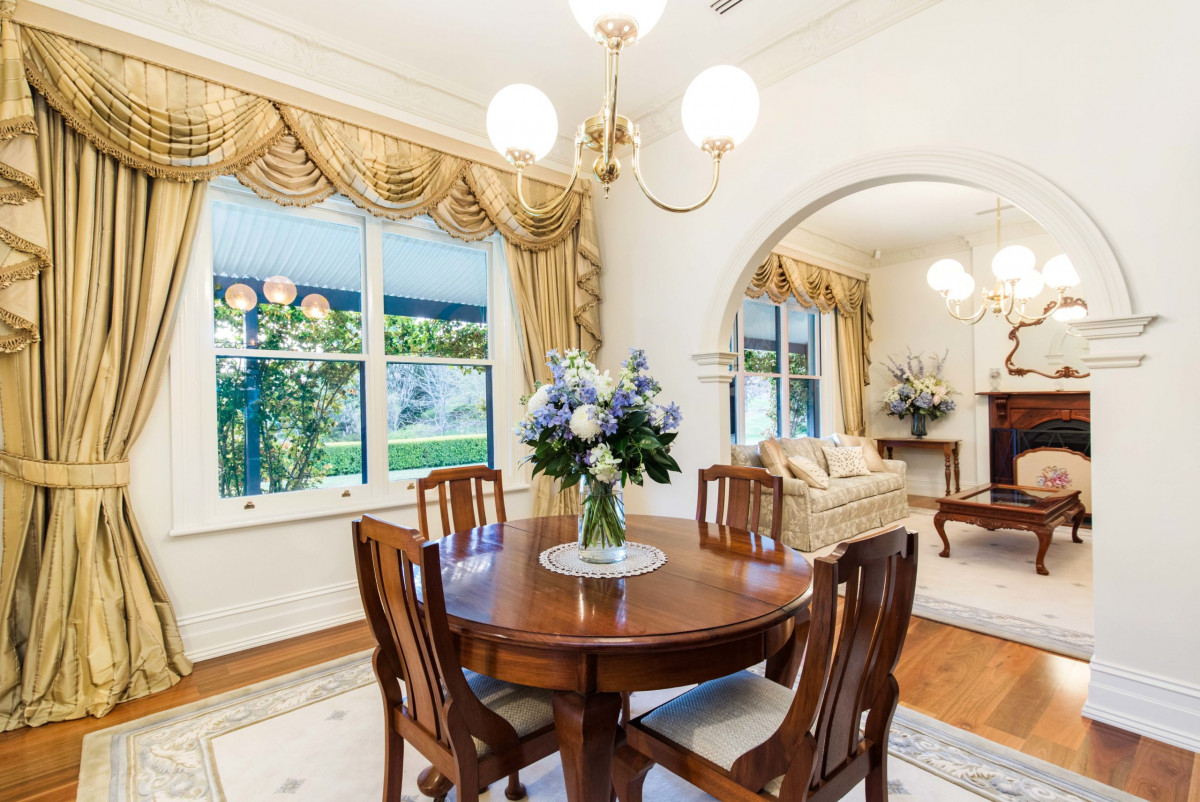 “I gave up counting long ago – when we got to about four or five thousand babies,” she says.

“What is fantastic about working in this field is helping to create families. There is something incredibly special about being able to assist people who cannot conceive to create their families. It is an amazing feeling; there’s something really magical about it.”

Lined with mature liquidambar trees and Pat Austin standard roses, the property’s long driveway departs from Hoylake Avenue and loops back on itself as it rolls down the hill.

“So, as you drive down, you just in this beautiful alley of colours. At the moment, the trees are all coming out in leaf, but in autumn, there are just the most amazing colours,” Christine says. 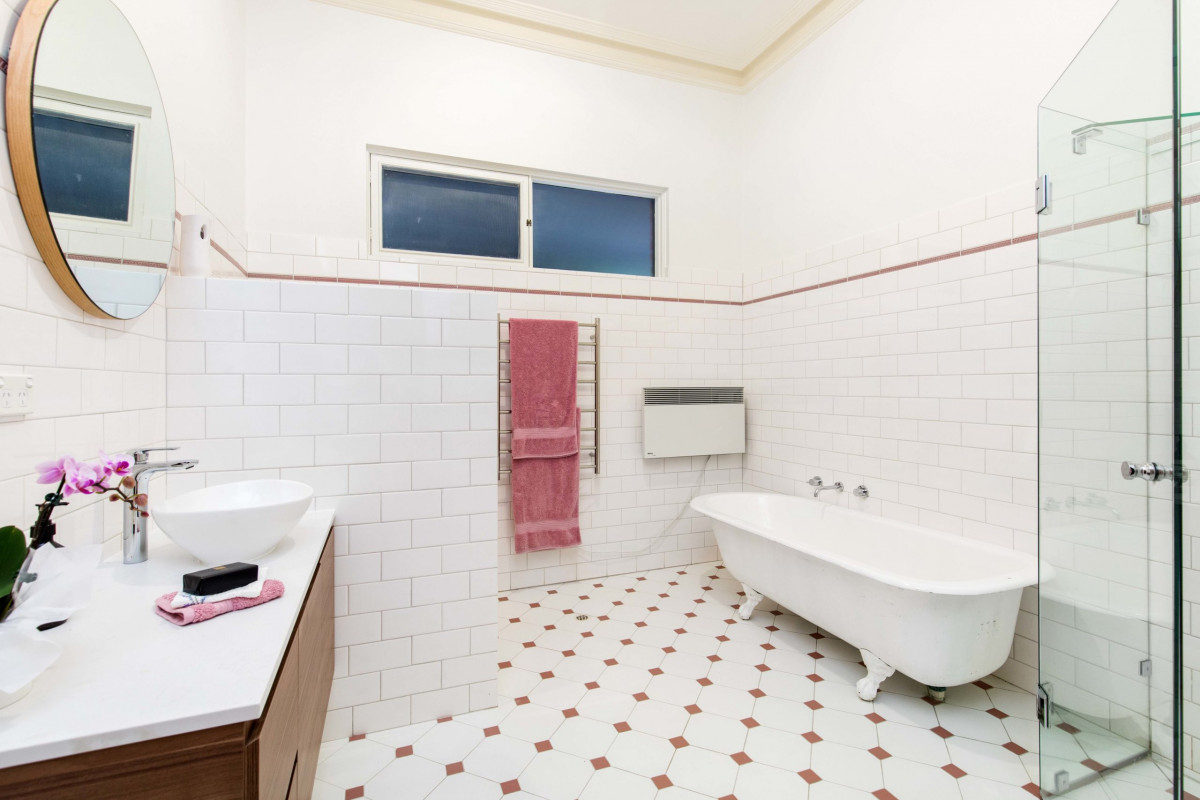 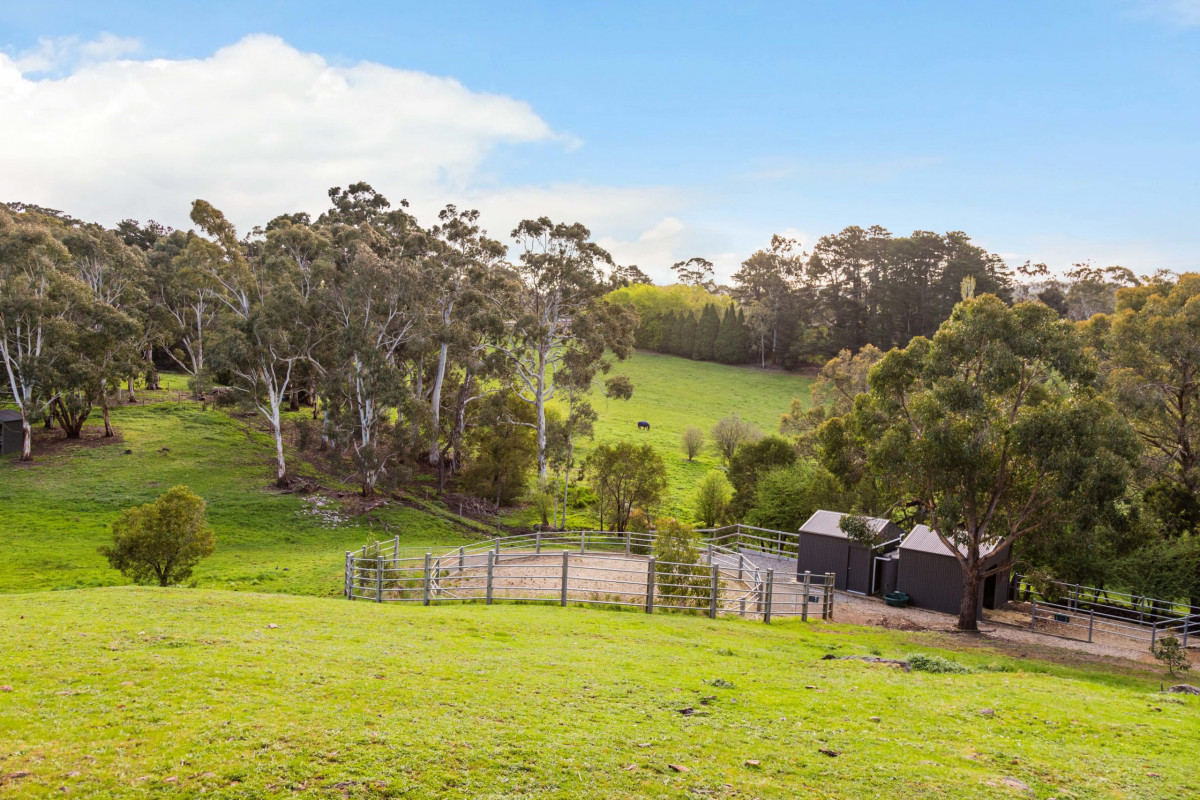 “Either side of our driveway there are about 90 Pat Austin roses; they’re a beautiful soft apricot colour. On one side, behind the liquidambars, there’s a row of camellias.”

In such a demanding career, the Hills property has served as a relaxing oasis for Christine, who most enjoys spending time in her garden.

“It’s a very peaceful place. We have had lots of wildlife, so it’s not unusual to have kangaroos on the property, koalas in the trees and frogs in the dam. The birdlife is absolutely stunning.”

The sale is being handled by Arabella Hooper and Will Scott of Harris Real Estate. 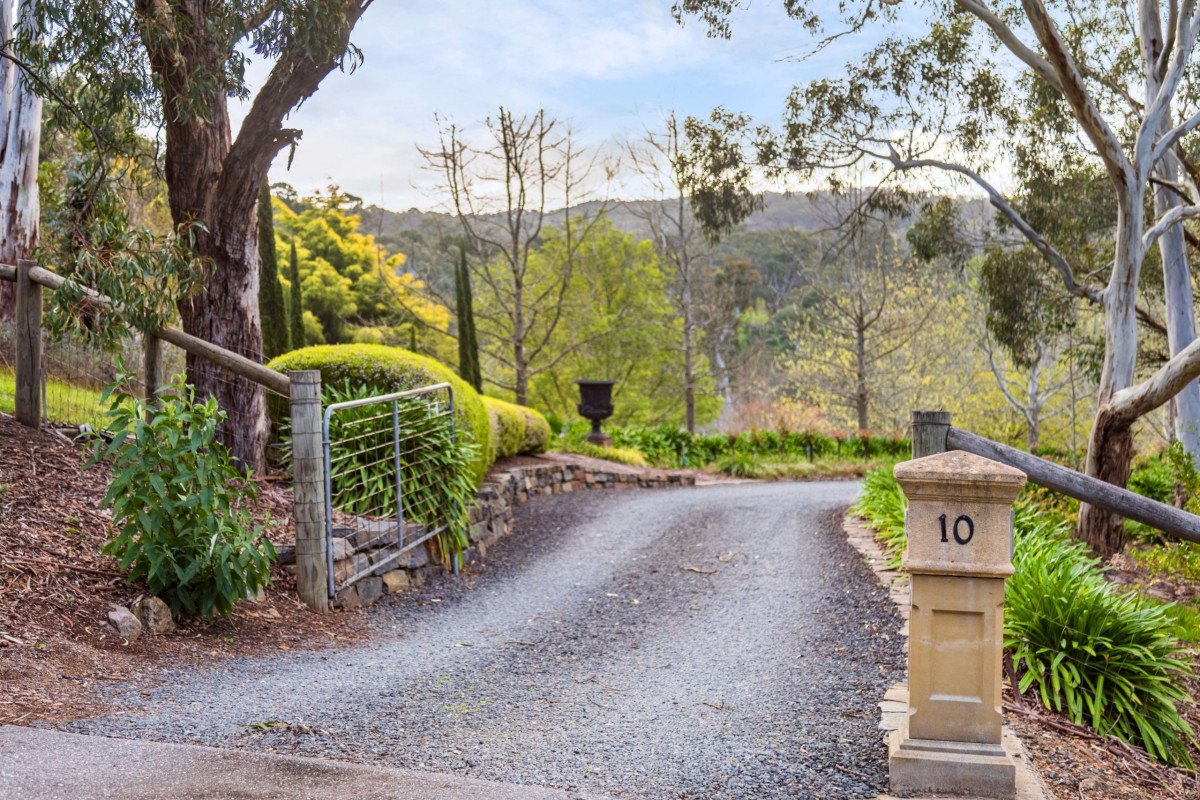 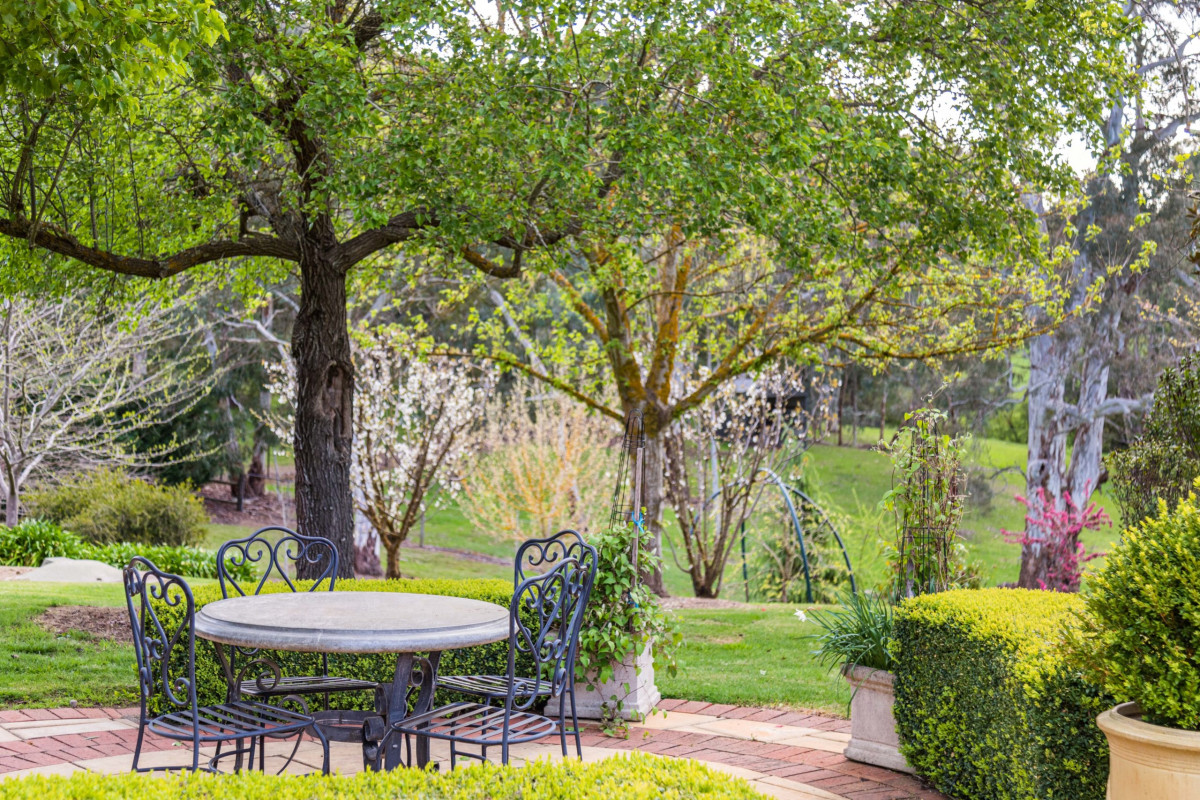 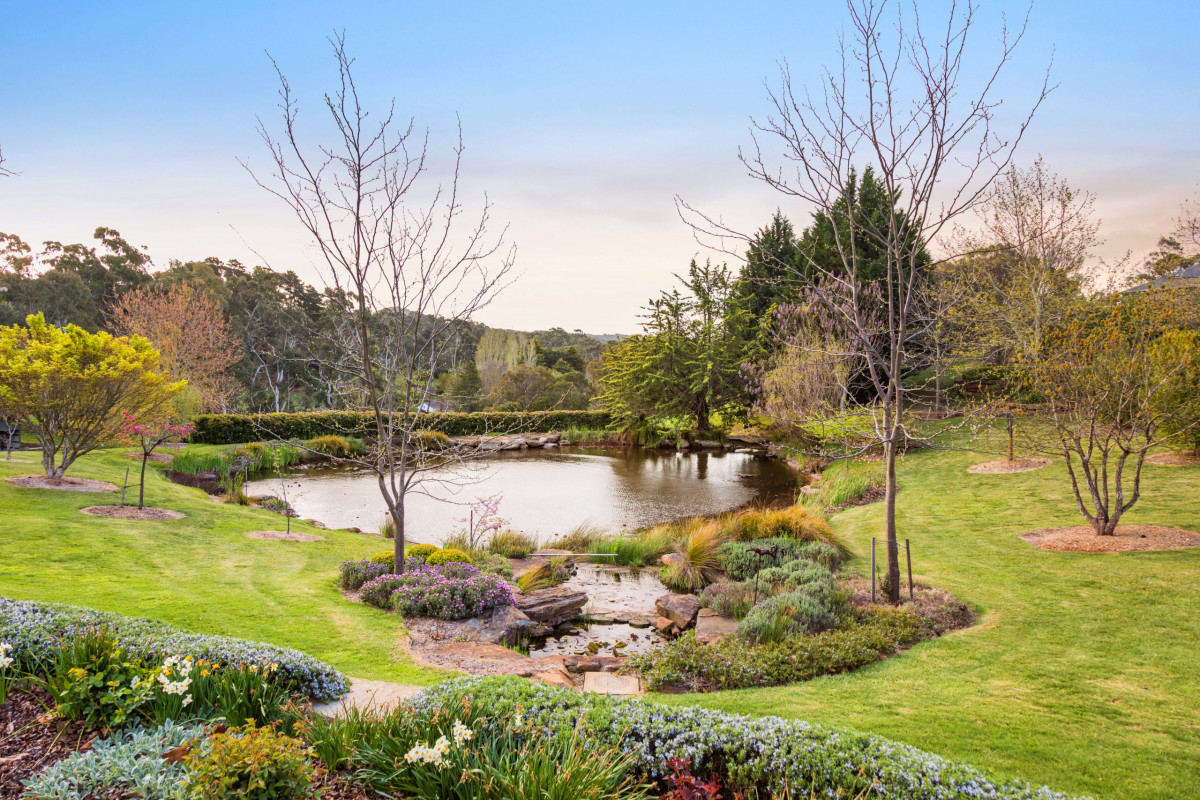