Port Adelaide legend Chad Cornes is selling his luxury five-bedroom dream home at Glenelg South with a pool, tennis court and rooftop terrace, just a stone’s throw from the beach and on the same street where he was born.

Winning an AFL premiership, being inducted into the SANFL hall of fame alongside your father, and building a dream home just metres from the beach in the suburb you grew up in; Chad Cornes has achieved most of his childhood aspirations.

“As a lot of kids do, I had a dream of one day having a two-storey house with a pool, spa and tennis court,” Chad says.

“Through footy, I’m really fortunate to be in a position where that dream could come true.”

From his home at 12 Farrell Street, Glenelg South, the two-time All Australian can look out of his front window and see where he was born — the Glenelg Community Hospital.

“I was born in the hospital just across the road. The first family home we had was at 6 Farrell Street and I’ve lived in different houses on this on this block in Glenelg pretty much my whole life.” 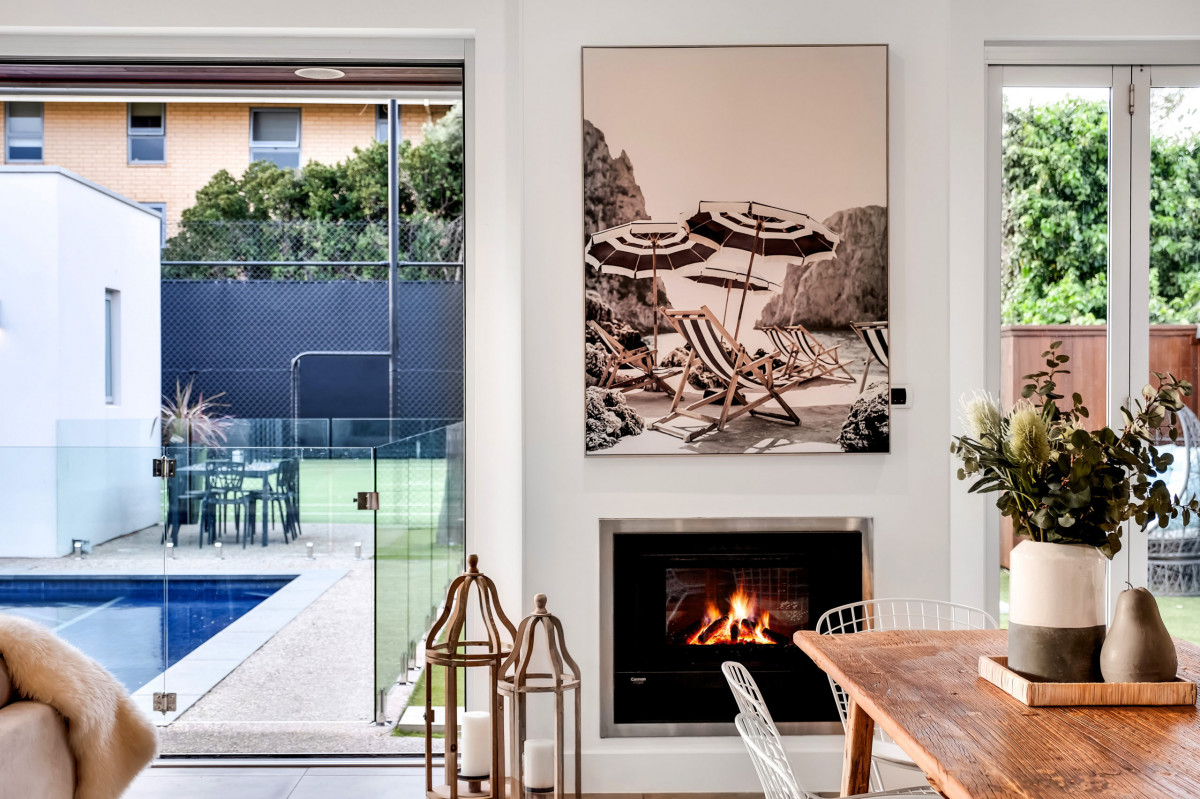 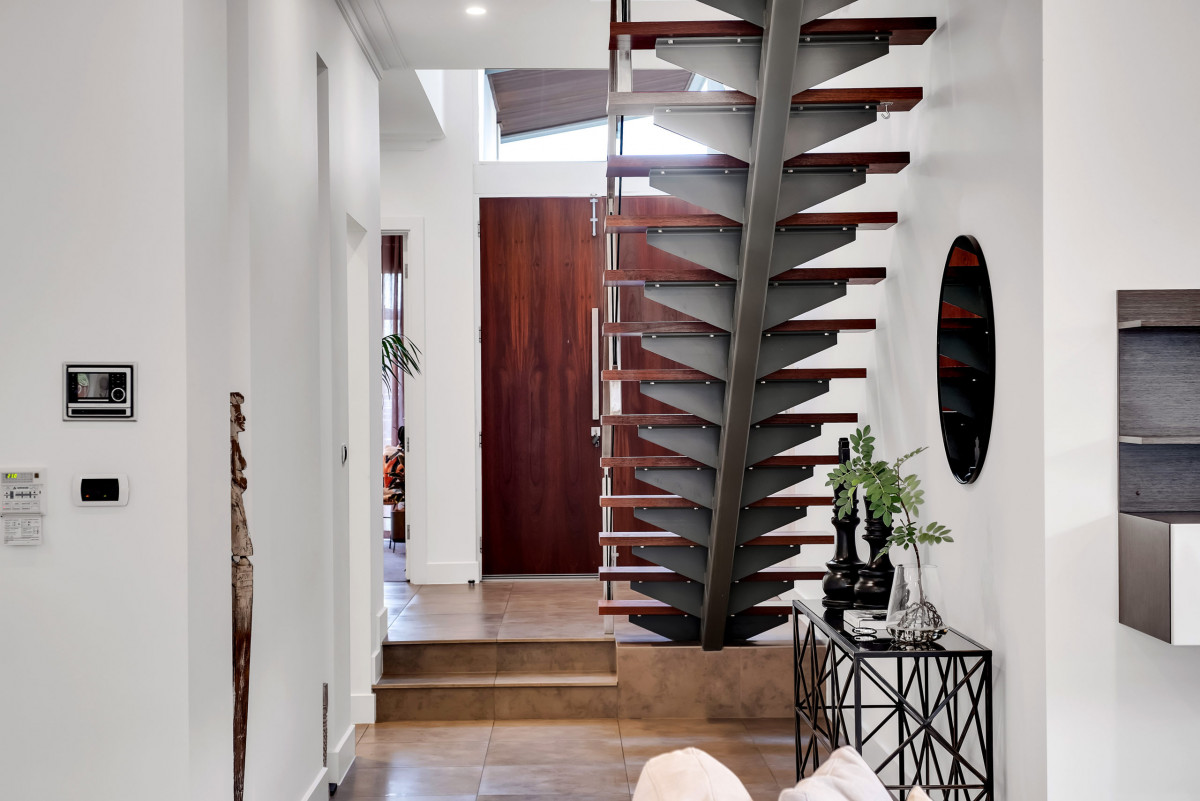 Chad has Glenelg’s 5045 postcode tattooed on his fingers — which he concedes was a questionable decision on a trip to Hawaii 10 years ago — but a homage to having started his football career with the Bays, where his father Graham Cornes was a club champion. Now, Chad is selling to move to the country.

“I love the area. To be honest, I never thought I would leave Glenelg,” says Chad, who is moving to Kangarilla, in the hills south of Adelaide, where he and partner Mikayla Graetz have purchased their next home. 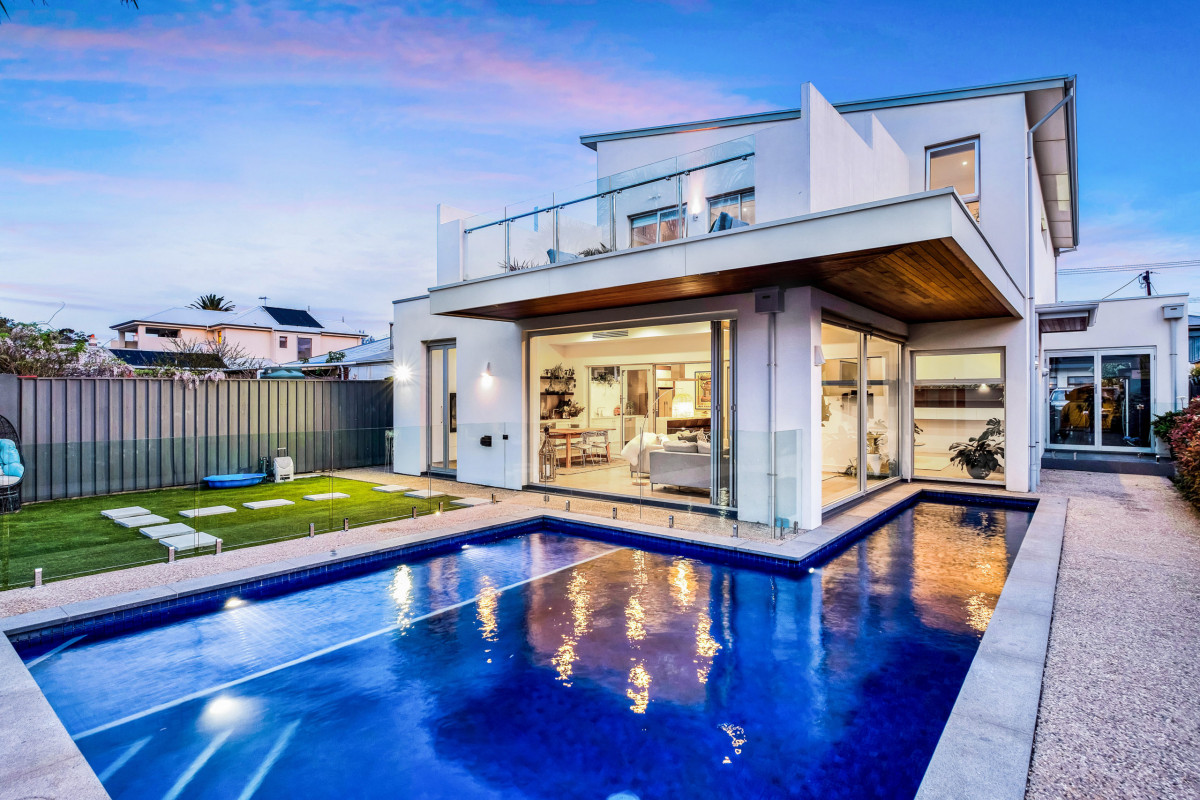 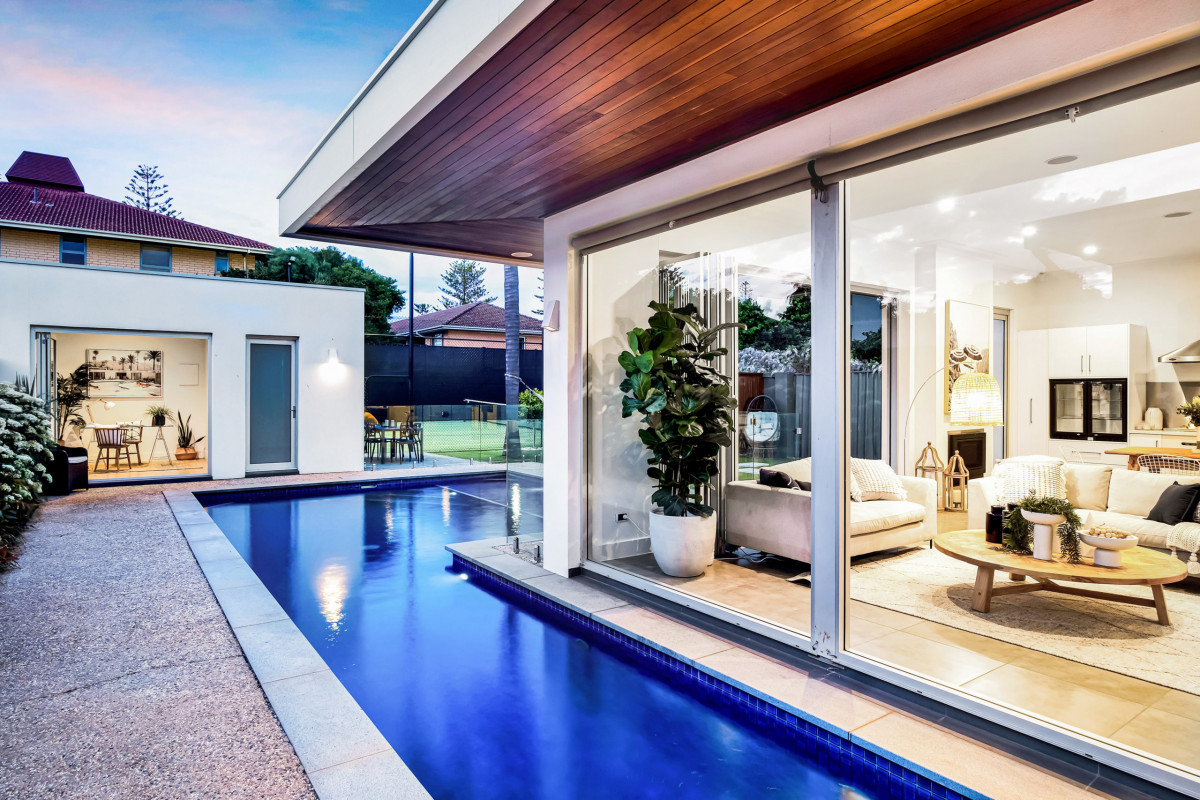 With Mikayla being 21 weeks pregnant, the move to the country was inspired by the desire to raise a family in a country setting with room for animals.

“She’s a country girl from the Riverland, studying to be a veterinary nurse. She has a really strong connection to animals and loves that side of life, so that’s a big reason why we wanted to move out to the country,” says Chad.

“It hasn’t really sunk in that we’ll be leaving. Dad and my little sisters are less than 200 metres away on the beachfront, so to not have them there will be different. Kane, his kids, and my mum are just down in Seacliff.

“I’ve always only ever really known Glenelg, so it will be different, but it’s also really exciting to try something new. If we didn’t do it now, who knows if we’d ever make the big move.” 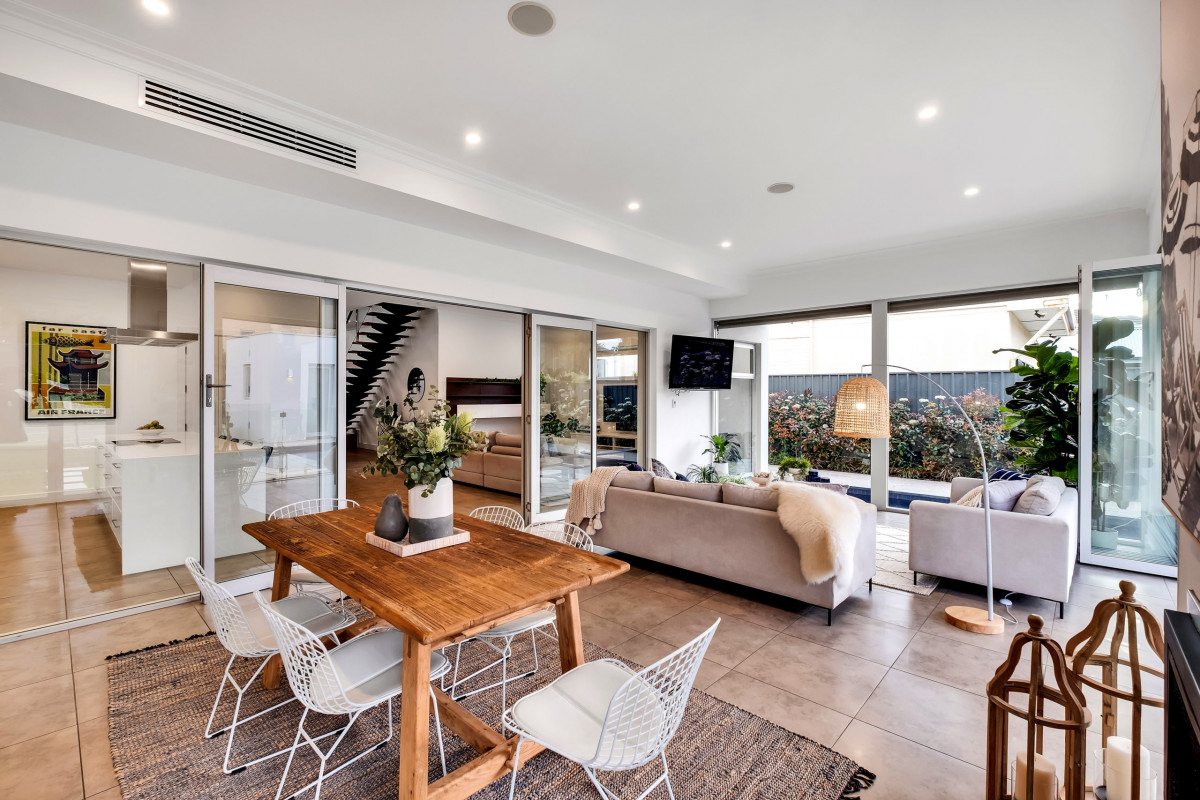 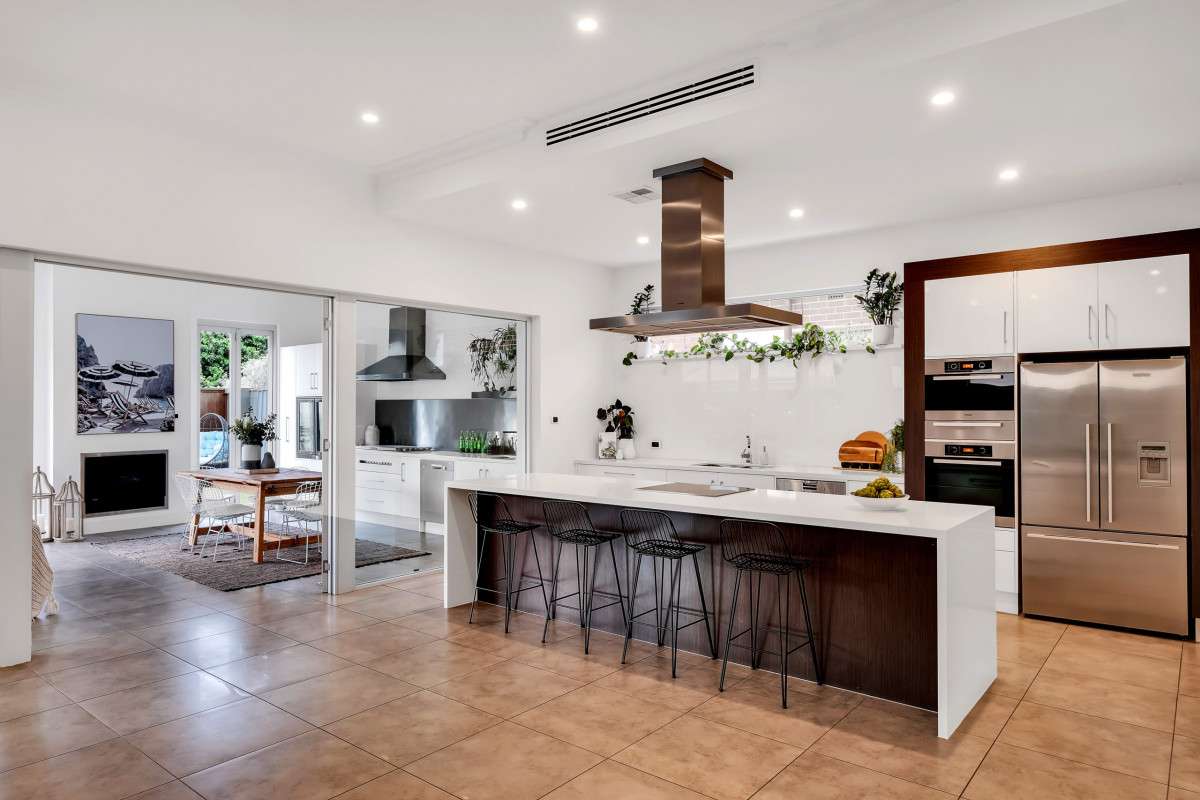 Currently the Development Coach at Port Adelaide Football Club, Chad purchased his current address in 2004 — the same year he was part of the Power’s premiership-winning side.

The home was a red brick Cape Cod-style house which Chad concedes was almost too nice to knock down.

“I just had a vision in my head of what this house could be. So, we knocked that down and started building about halfway through 2008, and moved in November 2009,” he says.

“As you open the front door, I wanted to be able to see through the whole house to the tennis court and the pool,” he says. 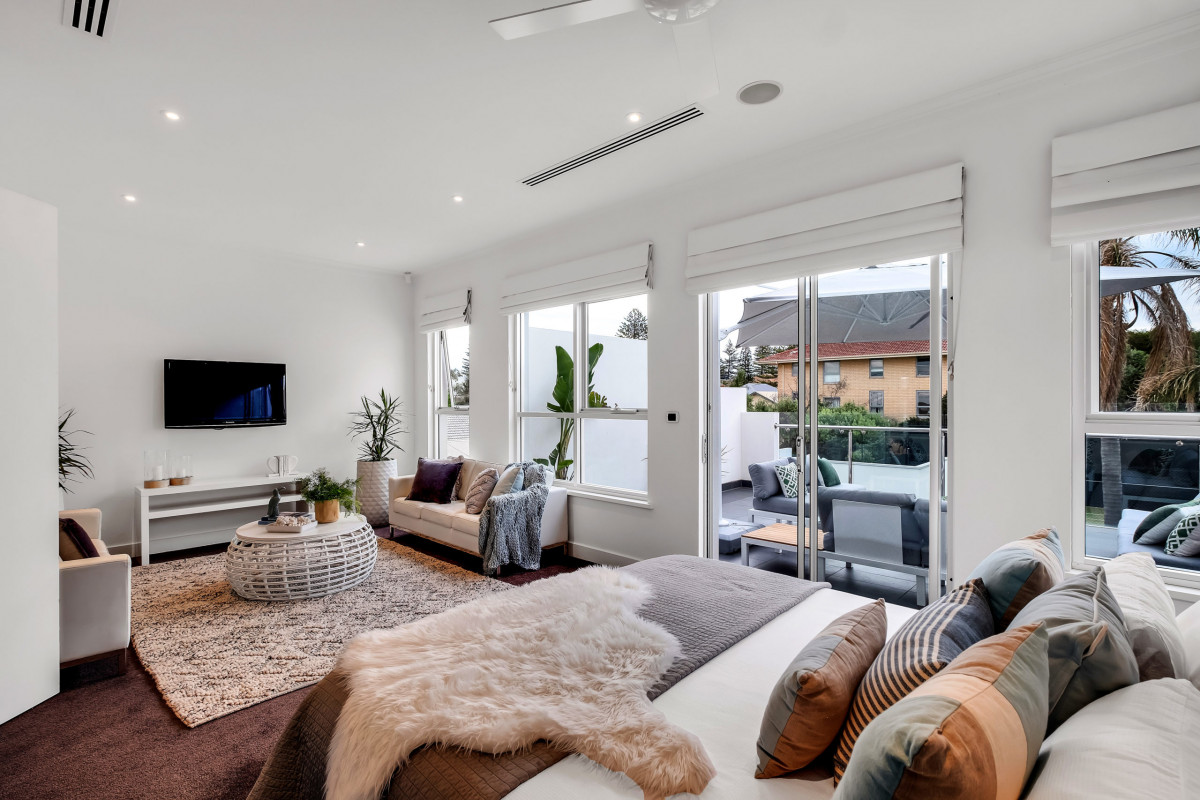 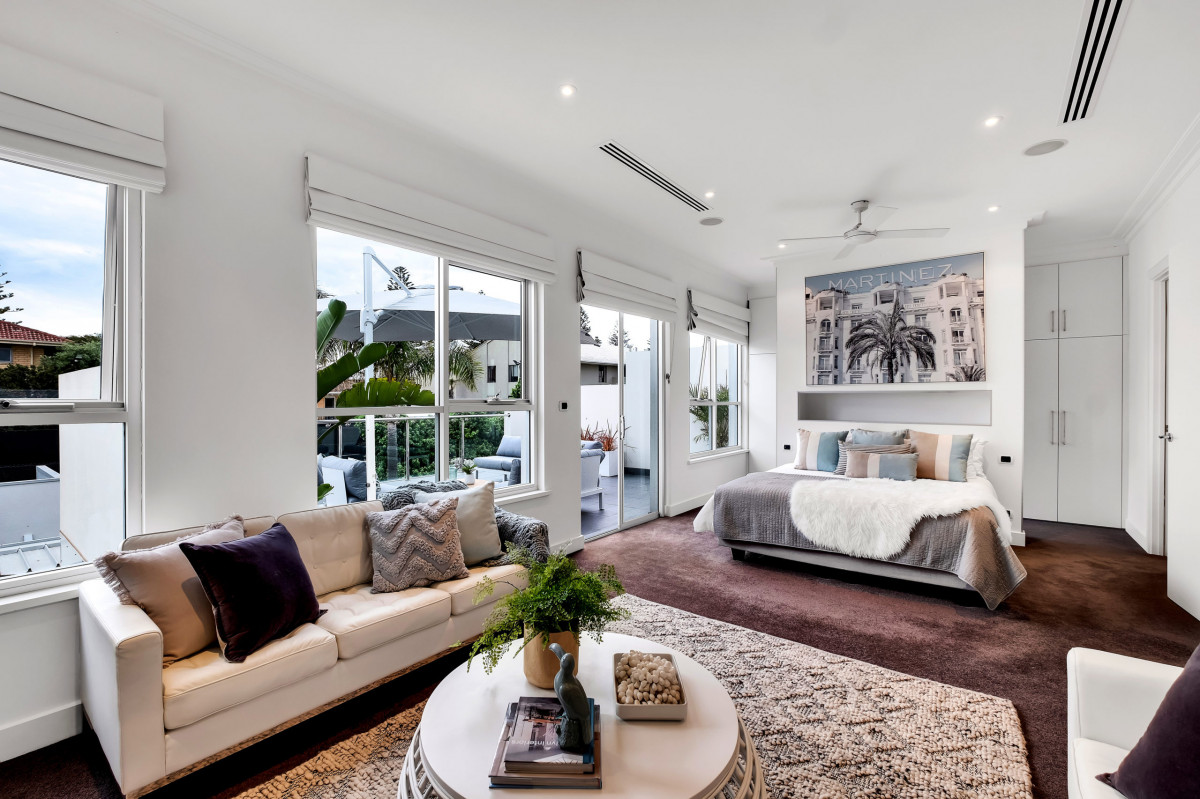 The open-plan home has served as a great entertainer, hosting large club functions with more than 100 people, gatherings with teammates, family and friends.

“The best memories I have of this house are of entertaining. My mates have enjoyed some great times here. In more recent years, I’ve had some of the younger players from Port Adelaide live here when they first got drafted.”

Being so close to the ocean, Chad wanted the house to have beachy elements – a throwback to his youth growing up with the beach almost at his doorstep.

“I have a lot of memories from Farrell Street even before I moved into this house. As kids, Kane and I just causing havoc around the neighbourhood on our bikes,” he says. 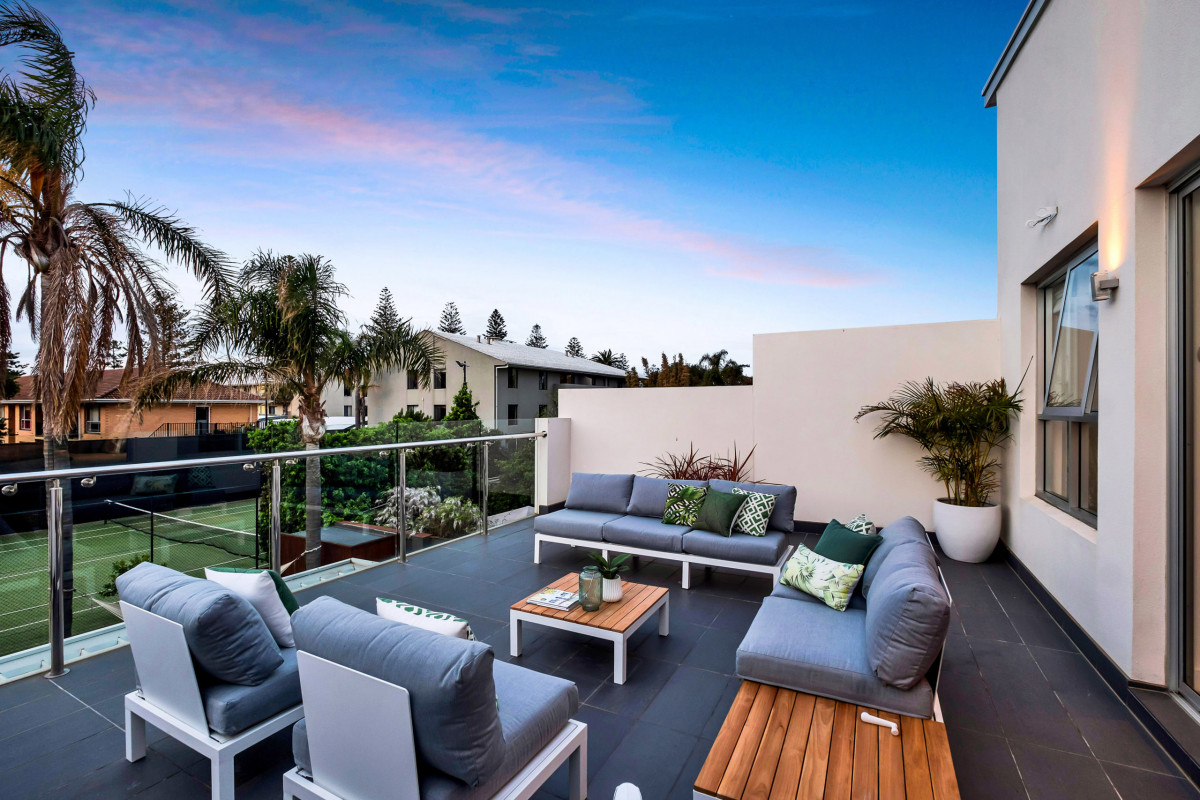 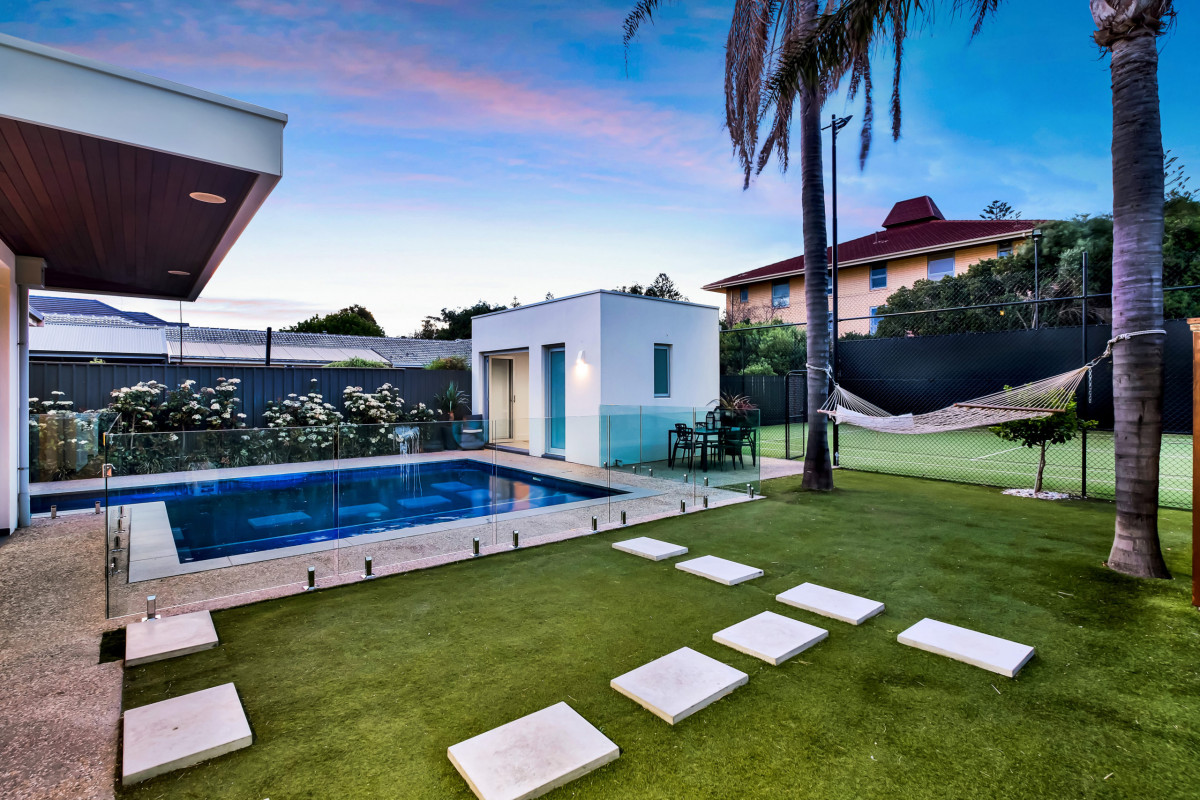 “When mum and dad split up, we moved just across the road from Glenelg footy club. So, the Glenelg connection for me is really strong.”

The home is serviced by a four-car garage, which Chad has set up as a home gym, alongside his motorbikes.

“Fitness is one of my real passions in life,” says Chad, who retired from AFL in 2013, but now at age 40 still keeps in peak physical shape.

“As a kid, Dad had a little gym set up in his garage and that was always one thing I wanted,” he says.

“To be able to have that that set up in the garage has been especially handy during the lockdown period of not being able to go to public gyms or use the club gym at certain times.” 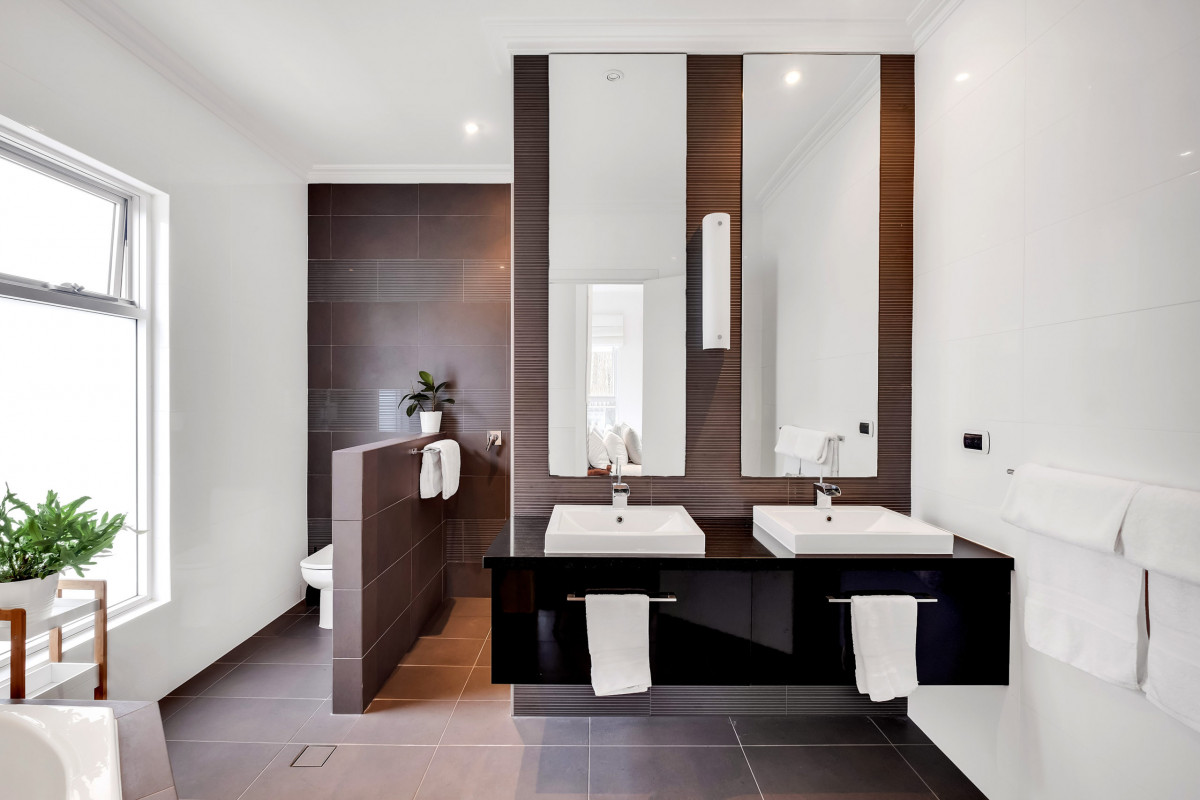 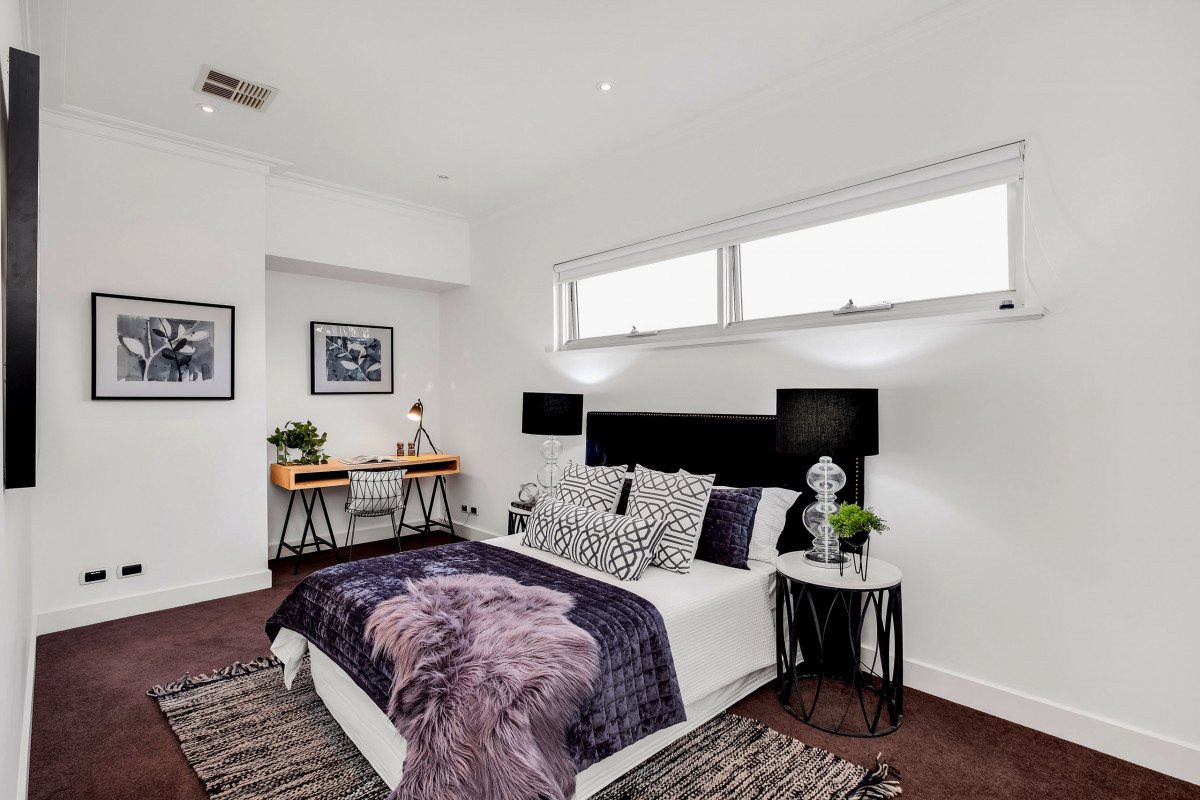 Chad will miss the proximity to the beach, summer days by the pool, and playing tennis. Although he admits he’s not a MasterChef, he cooks on the barbecue almost every day.

“With the two palm trees, the hammock is a great spot to relax in summer and does get a lot of use,” he says.

“I still love the beach. So, having the best of both worlds is special here.”

The sale is being handled by Kris Casey and Laura Prest of Harris Real Estate. 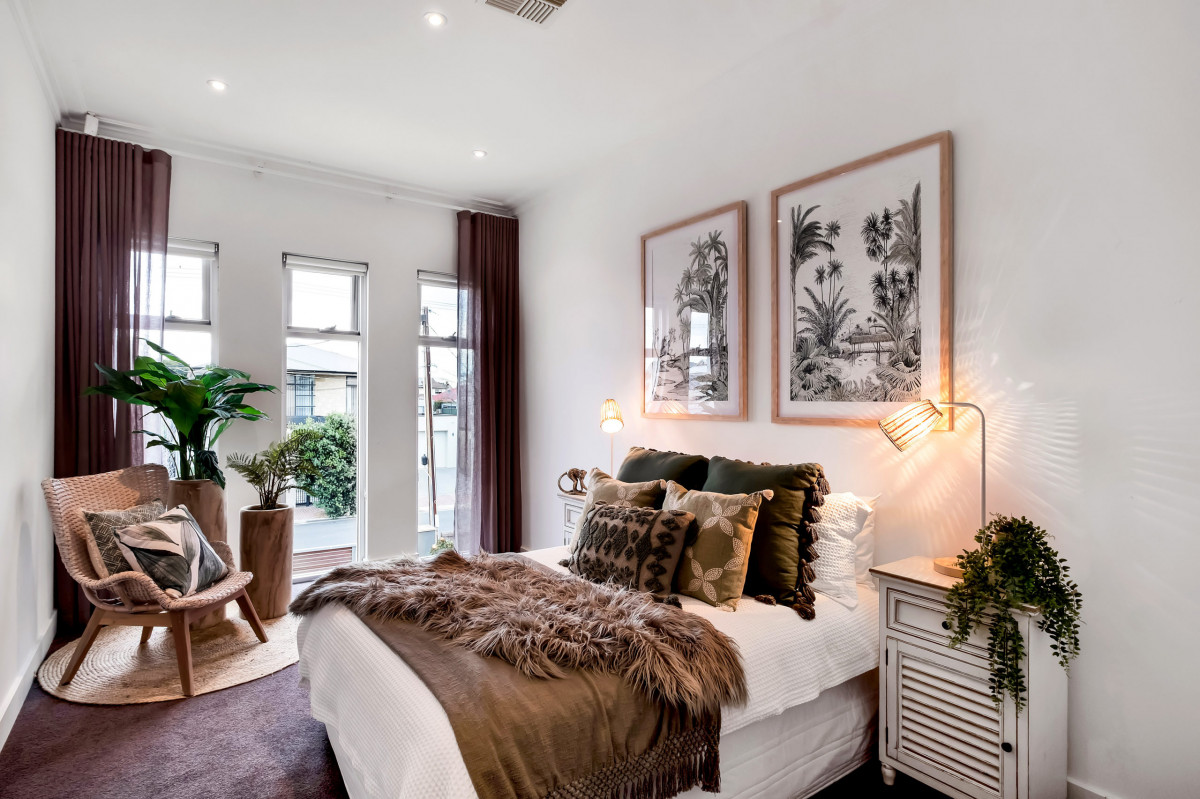 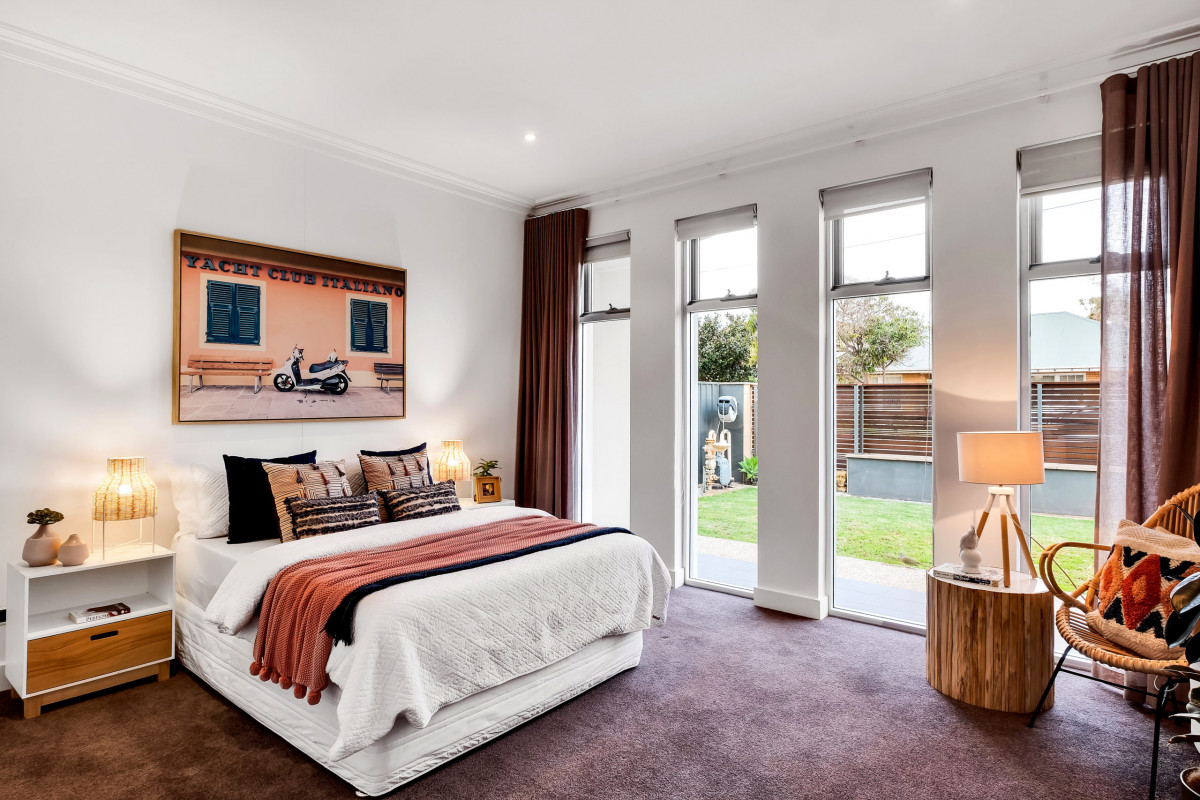 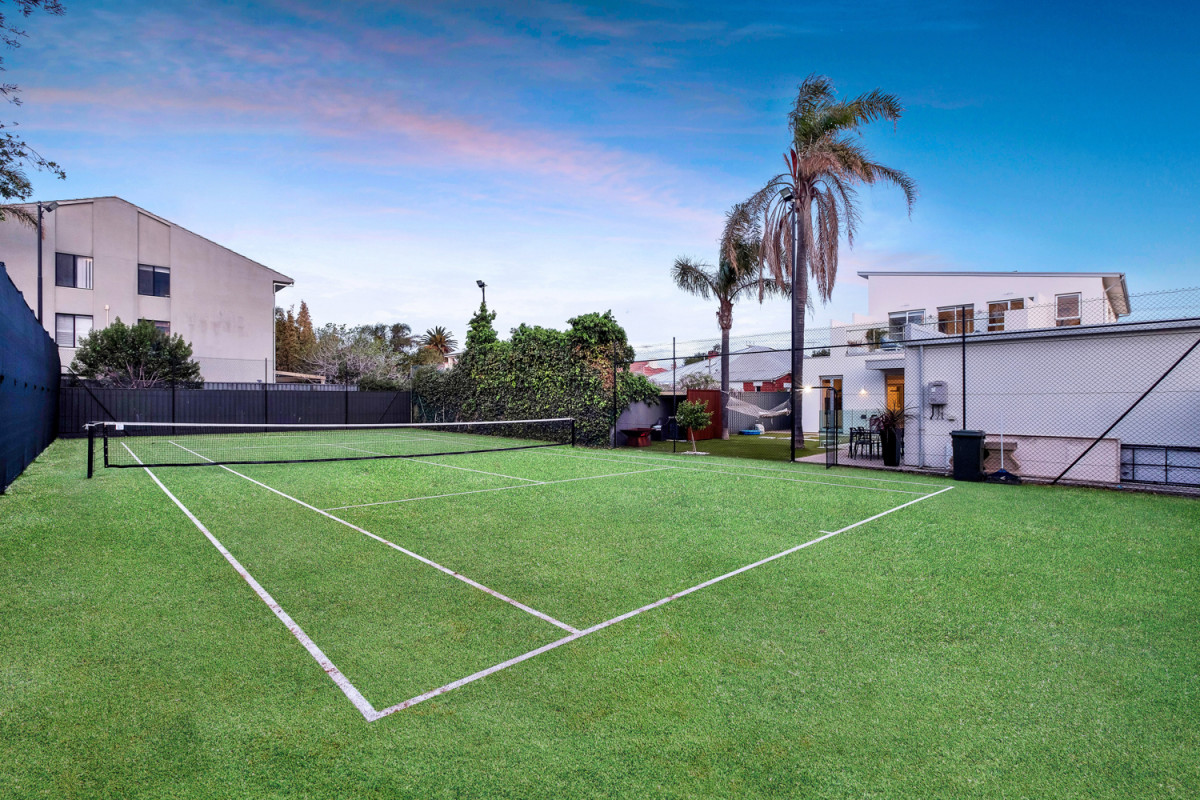