Smart living is the focus of this five-bedroom home at Collinswood, fastidiously renovated and extended by Steve and Bianca Marafiote in 2018.

With five bedrooms, three bathrooms and a rear pavilion looking out to the luxurious pool, Steve and Bianca Marafiote’s Collinswood home is a gem in one of Adelaide’s most tightly-held suburbs.

Having long aspired to live in Collinswood, Steve and Bianca purchased the home in 2012 as the place to raise their four children, with the aim to eventually extend — a project they completed in 2018.

Having finished the extension, the family have this week put the home on the market.

“It feels like we’ve climbed a mountain,” says Steve. “We want a new adventure in life and the timing is right for us to do that. We really enjoyed the project and found it to be a terrific experience.” 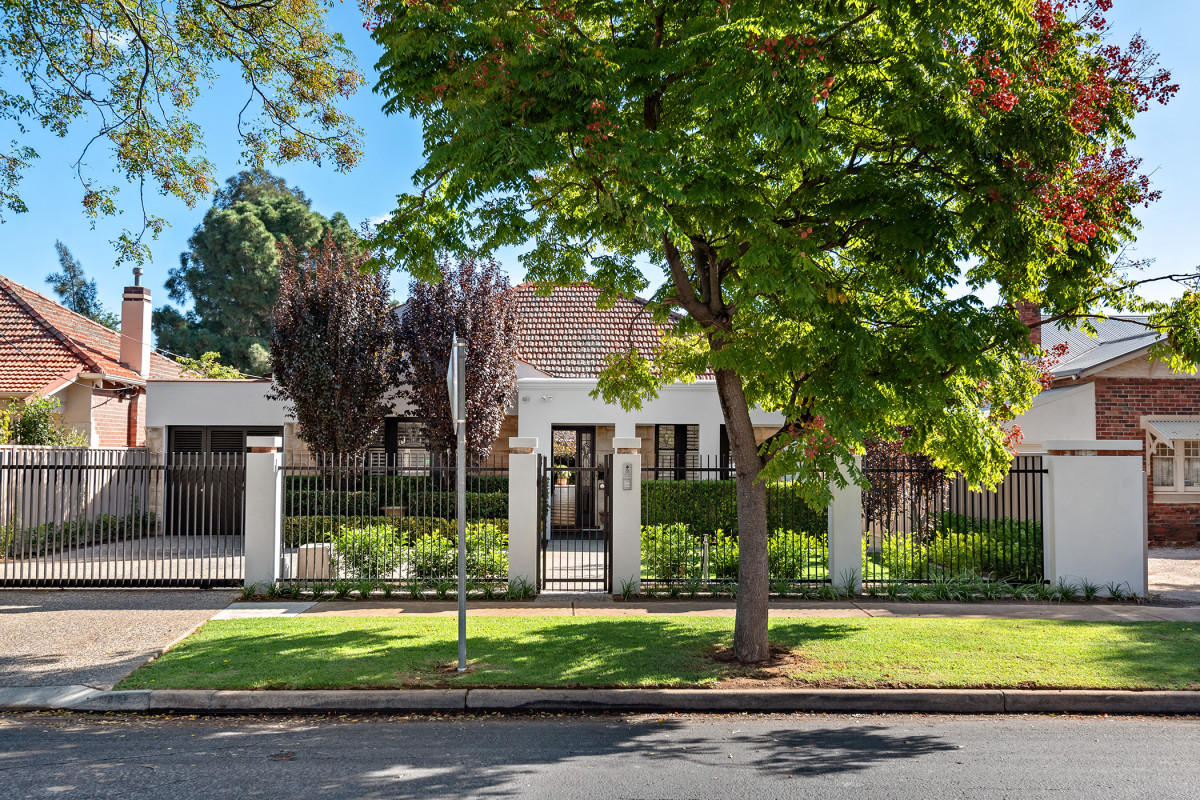 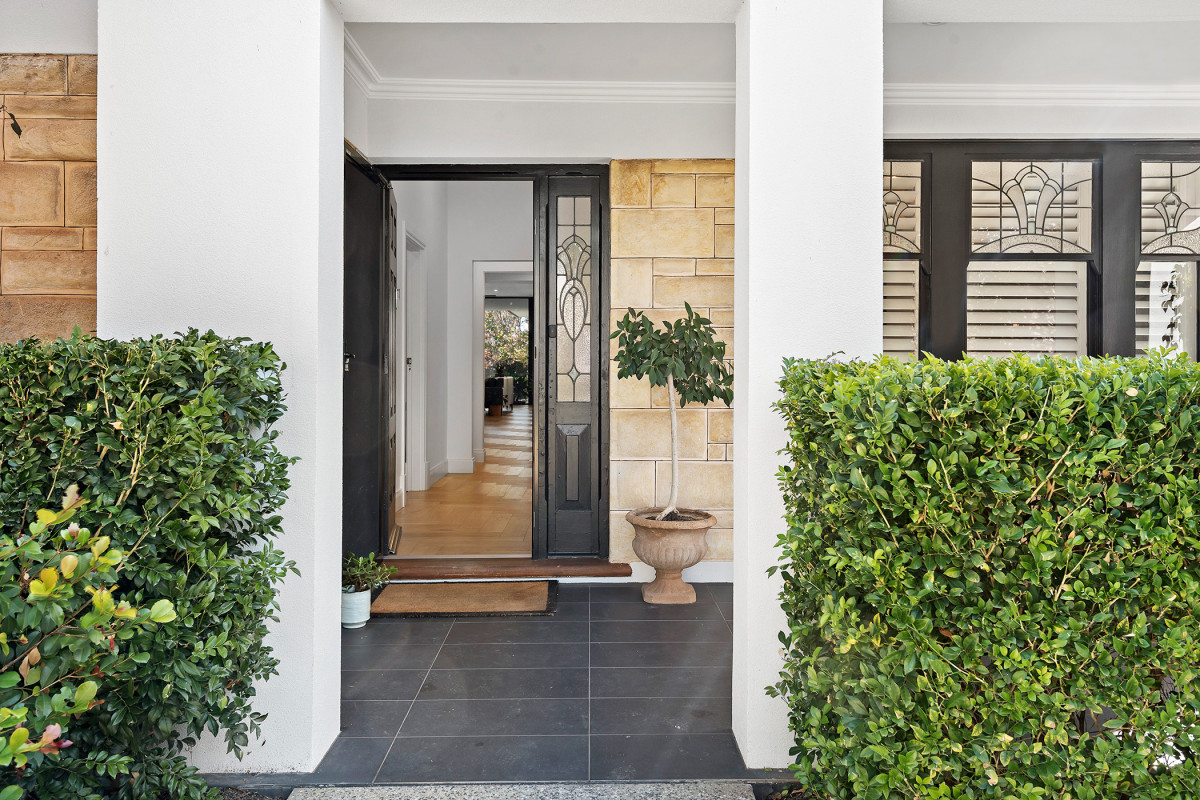 With a background in primary production, Steve is CEO of the multinational Sundrop Farms, which each year grows 15,000 tonnes of tomatoes at a state-of-the-art sustainable facility at Port Augusta.

Unlike anywhere else in the world, Sundrop Farms uses its own technology to desalinate seawater for its greenhouses, with a concentrated solar energy plant that supplies the energy needs of the facility.

“We employ 300 people and we’ve got 106 kilometres of rows of tomatoes growing on the farm. It’s an incredible operation,” Steve says. Sundrop supplies all of the fresh truss tomatoes for Coles supermarkets in South Australia.

“I love agriculture, hence why we’ve got a nice garden at home, too.” 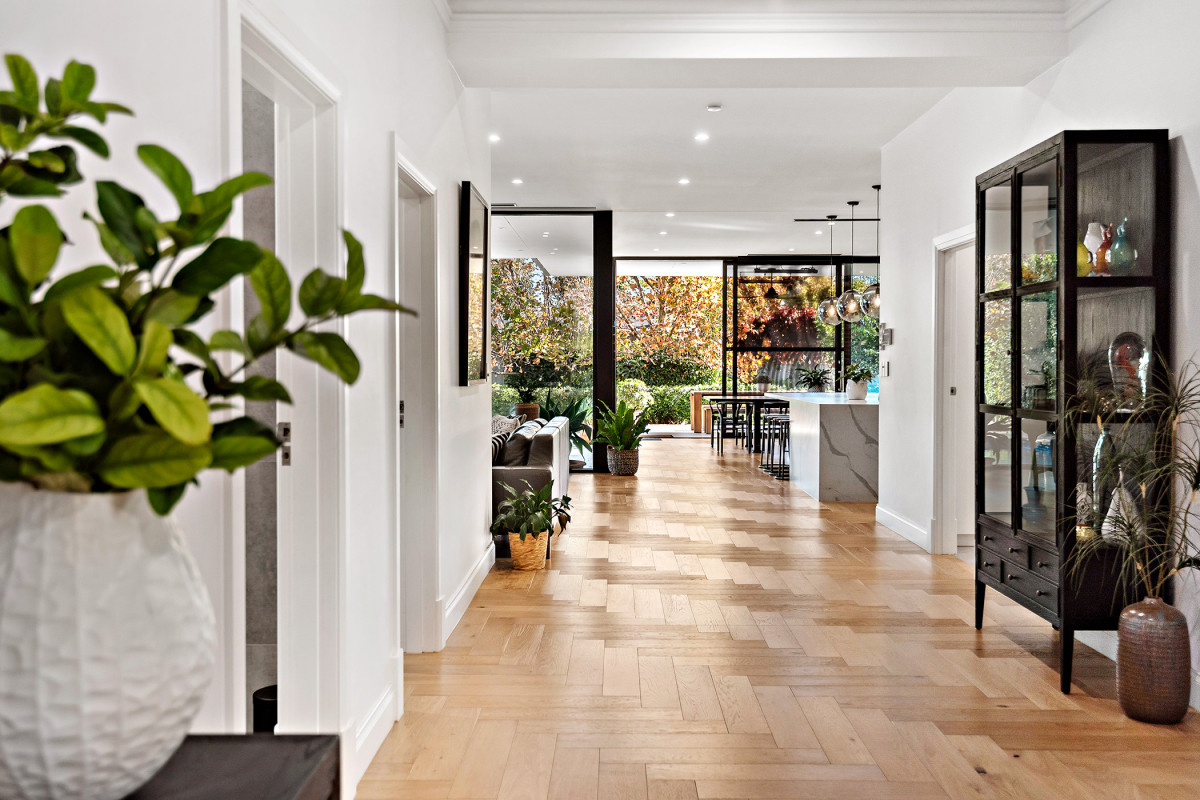 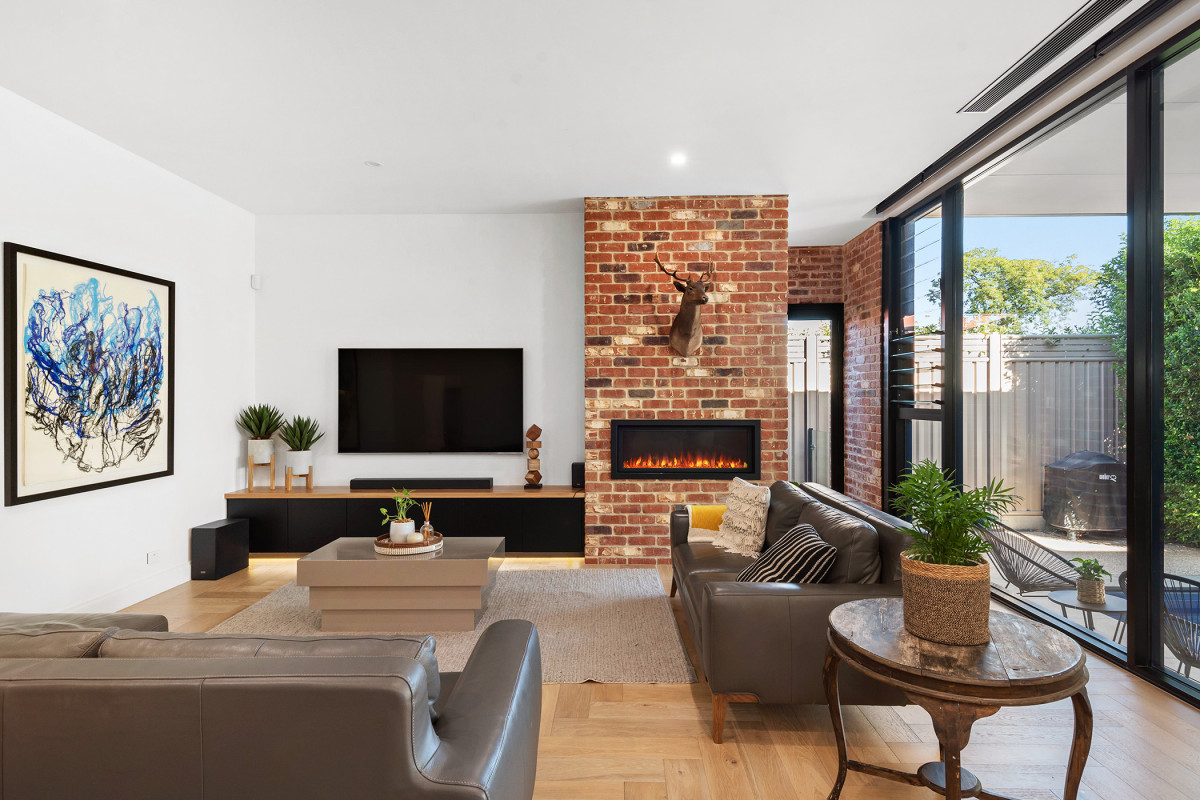 Steve is a third-generation produce grower. He was raised on a vineyard at Hahndorf and his first job was working in the family fruit and veg store. “My grandfathers were both tomato growers and vegetable farmers. We had a retail store and vineyards as well,” he says.

Steve says his progression to becoming CEO of a global company has been an evolution.

“You want to do things well, whatever you touch in life. At Sundrop we challenge lots of traditional thinking — the way we’ve used concentrated solar energy has never been done before.”

His eye for perfection, sustainability, and innovation is no less evident in his home. The property includes a high level of security, giving Steve peace of mind when he’s away working at the farm at Port Augusta. 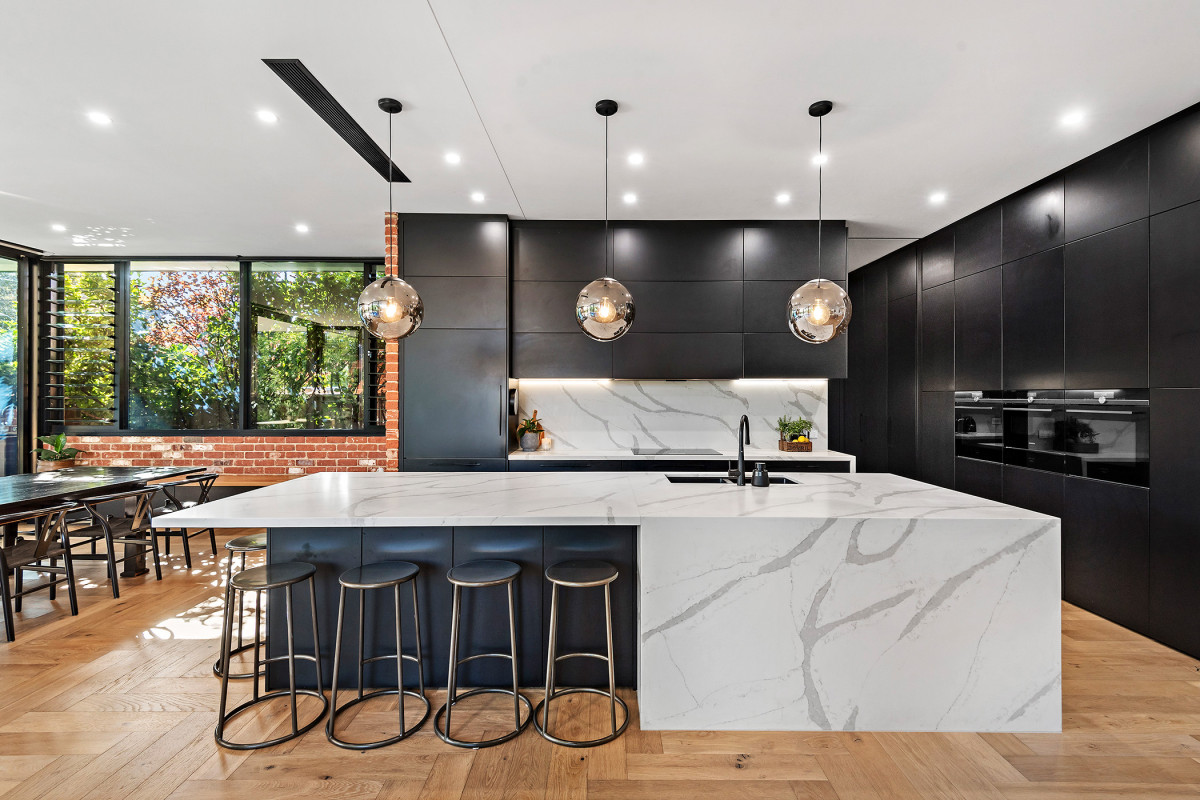 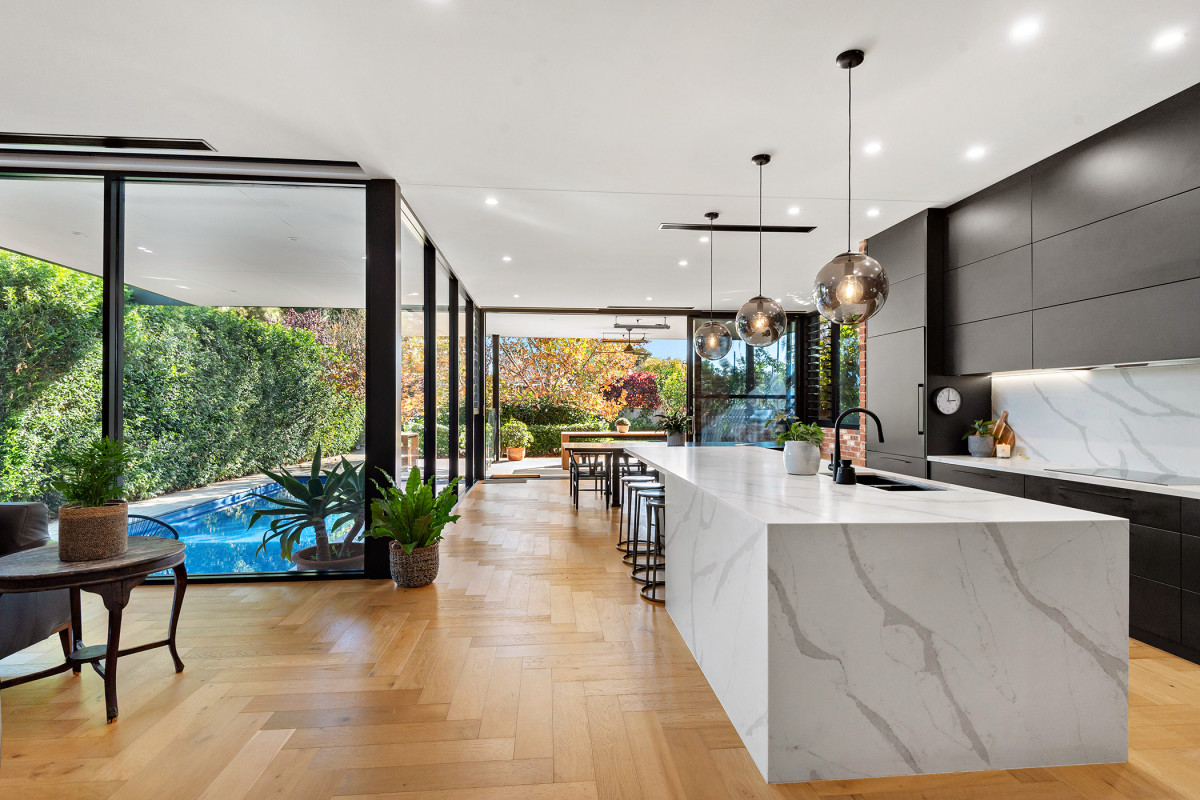 The couple was attracted to the large block, which featured a 1940s-built art deco home that had been occupied by the previous owner for 45 years. “She’d grown old there and was always healthy and happy in that house, which meant the house had a good history,” he says.

“The fact that it had a happy life before us was really meaningful. And it’s been that way for us; it’s a beautiful family home. We always loved Collinswood, and our aspiration was always to raise our family here.

“We completely renovated the garden when we got here 12 years ago, with the aspiration of extending, eventually. Now you can see the benefit of it — we’ve got large hedges out the back that we grew from scratch.”

When the time was right, the couple commissioned local architect Damian Chwalisz to design the project. Both Bianca and Steve worked closely with Damian on a cutting-edge design that spared no expense. 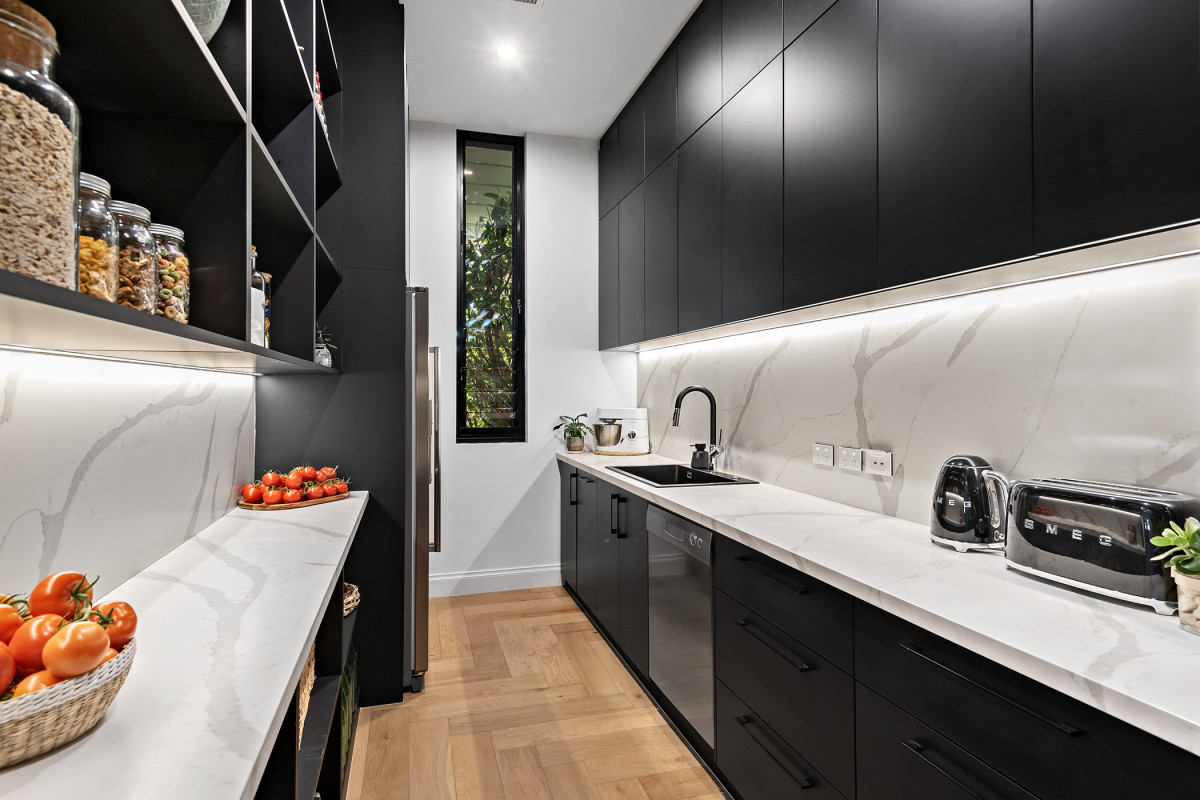 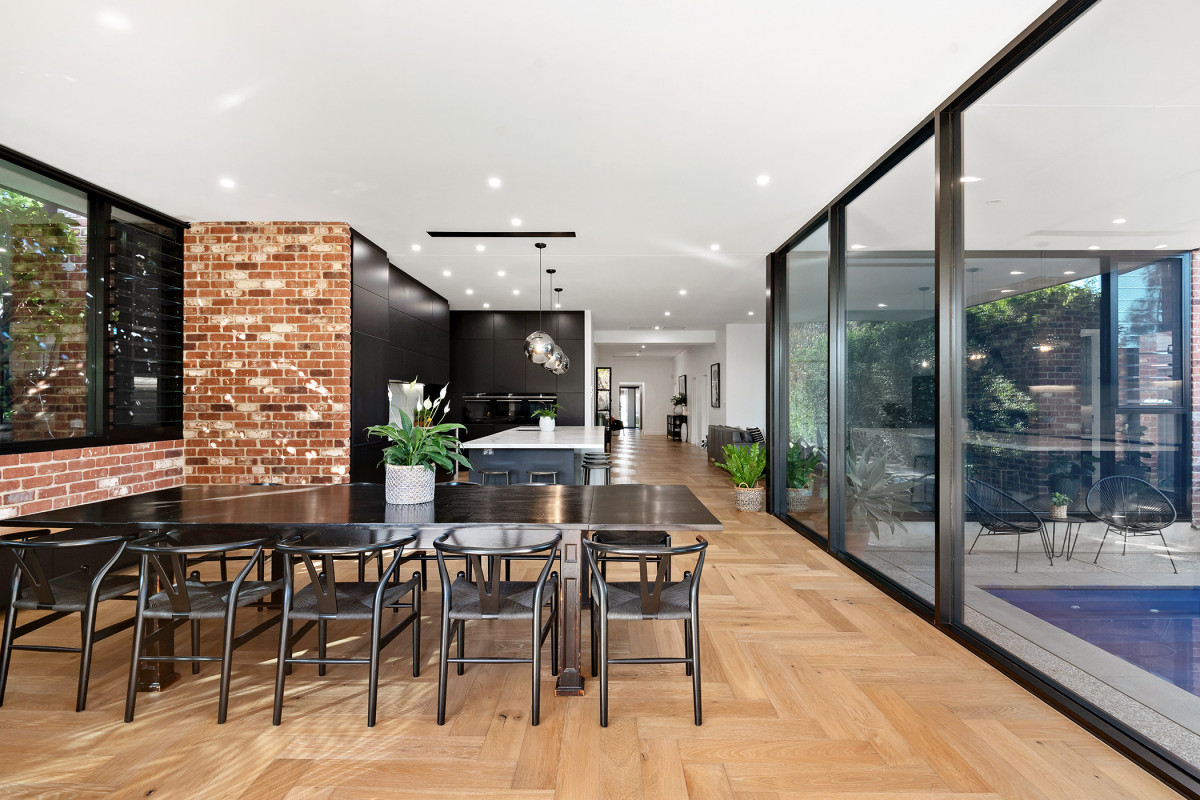 “We were very pleased with the design, which was empathetic to living requirements and a casual family feel. We wanted sophisticated design balanced by family overtones,” Steve says.

The renovation kept the ceiling line of 3.1 metres throughout the house, including the bathrooms. A third bathroom is easily accessible from the pool.

Wet areas have been fitted with superior tiling, underfloor heating and top fixtures. “We didn’t skimp in any areas in that regard. There are no shortcuts. I even had the carpenters go up into the roof and straighten every roof truss and make sure everything was perfect.”

The solar-heated magnesium pool and outdoor barbecue area provide a sublime entertaining space, with interactivity between the kitchen, lounge and dining area. The commercial-grade double glazed windows wrap around this north-facing space. Although they appear recycled, the exposed brick walls are newly constructed. 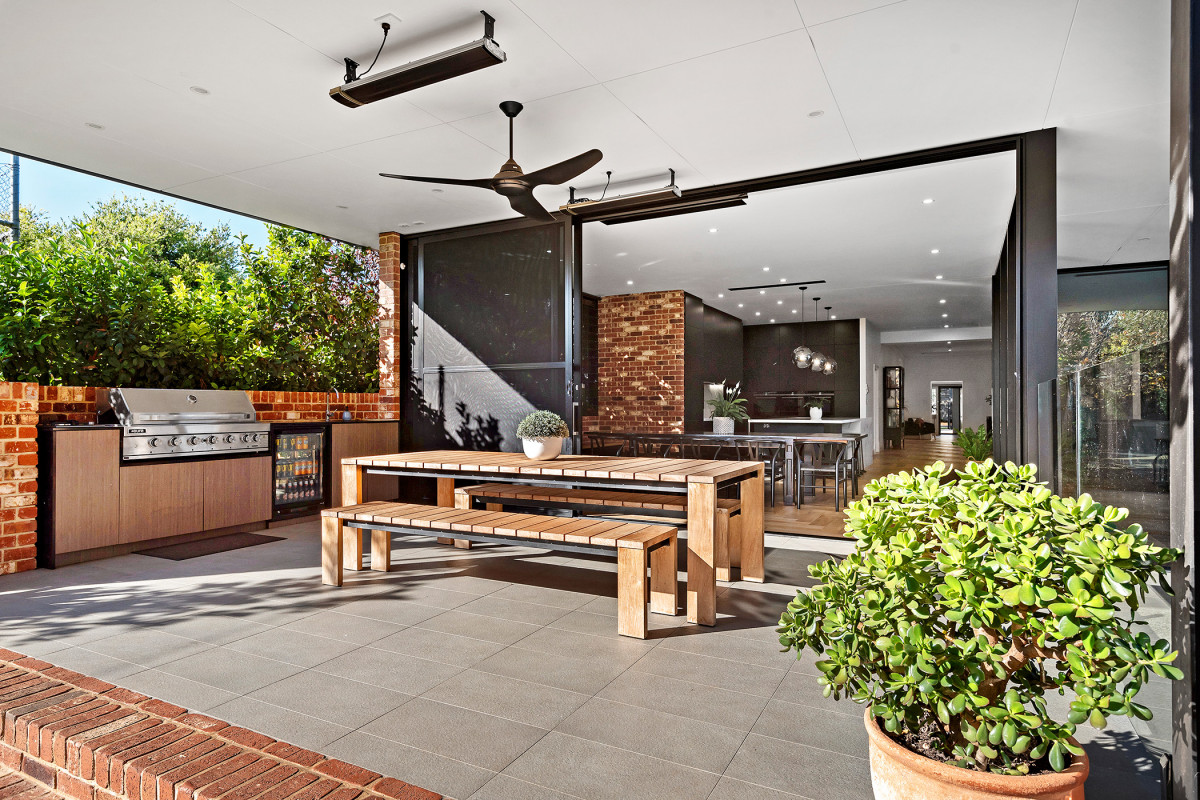 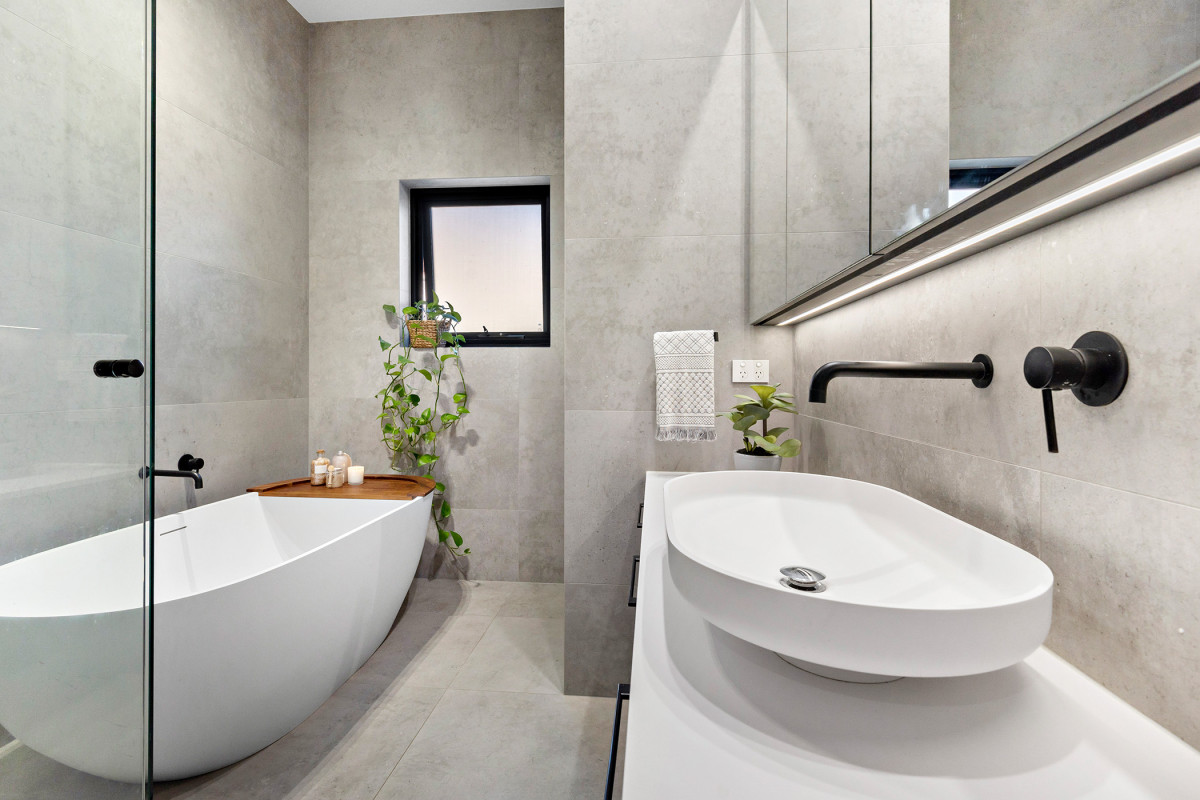 Steve credits his wife Bianca for all her work on the home, but particularly the kitchen, which is one of the most well-equipped and spacious you could find, boasting a butler’s pantry that is close to the size of a normal household kitchen.

“My wife’s contribution has been huge in the whole development of the house, so it’s got a woman’s touch. She wanted a large laundry and kitchen and all the convenient appliances; it’s all there,” he says.

“Bianca wanted to ensure occupants could sit at the breakfast counter, dining table, or lounge and commune as a family unit while enjoying the tranquillity of garden greenery and the pool. The architect was able to incorporate a nice balance into the design.”

Appliances are the latest high-spec Siemens, with cutting edge tech throughout the home. 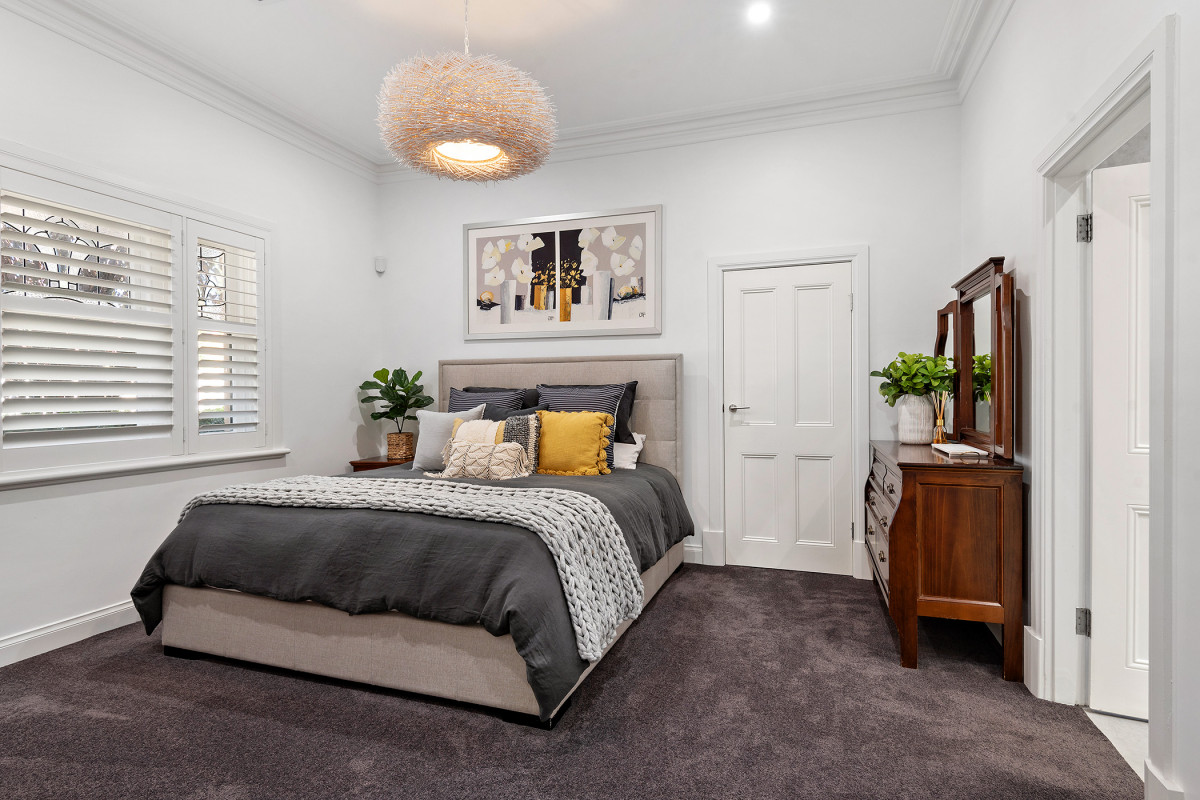 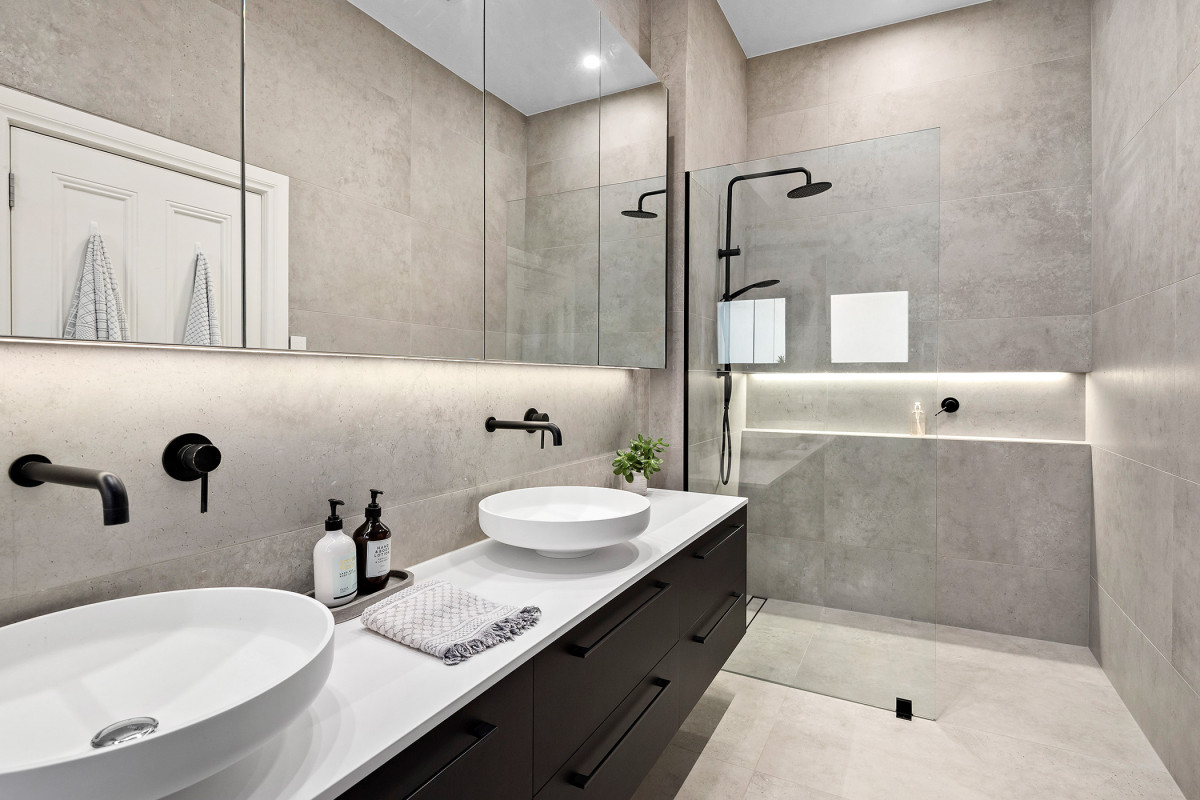 “The house is full of smarts. The dimmable light switches that we have are the latest technology that’s come out from Clipsal. The solar panels themselves are all on smart monitoring, and we’ve got loads of really clever things in that regard.”

The family also enjoys the convenience of the large shedding at the back, as Steve and his children like to tinker with projects occasionally.

Steve says he’ll miss the garden and the view from the lounge, looking across the water to the trees and the hedges.

The sale is being handled by Sally Cameron of Toop & Toop Real Estate. 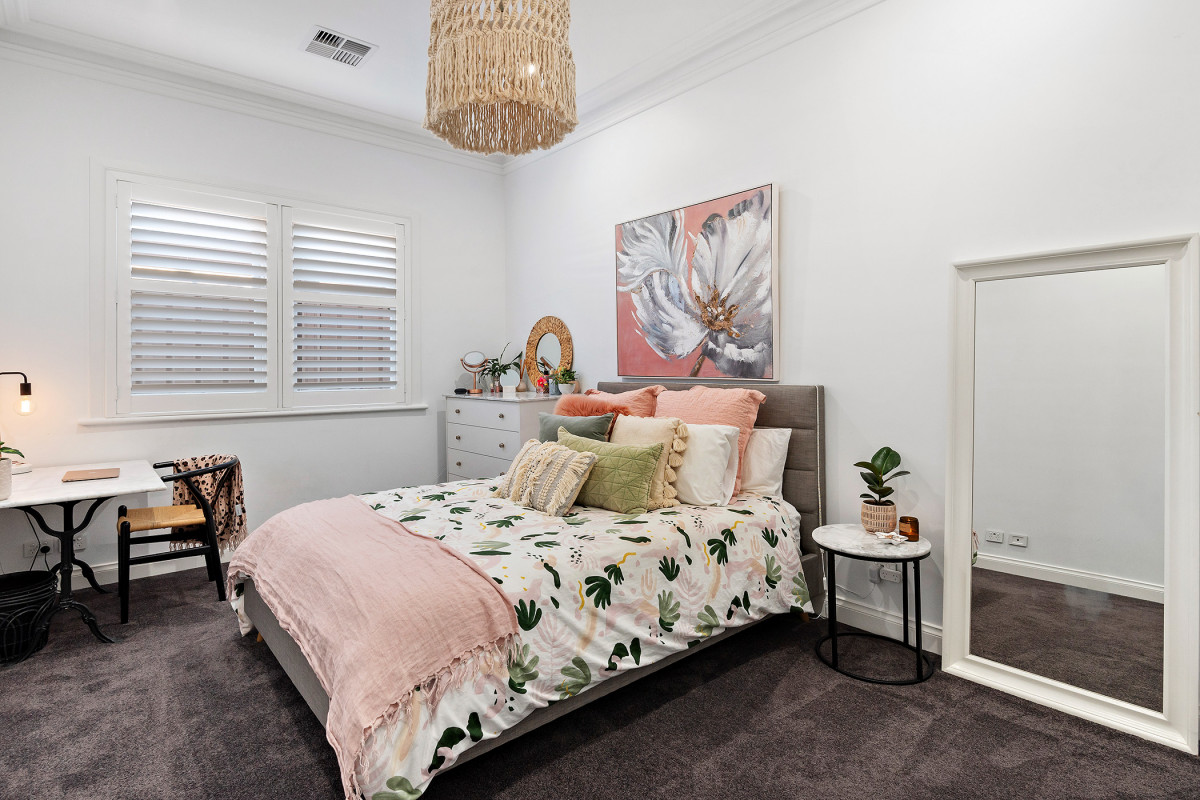 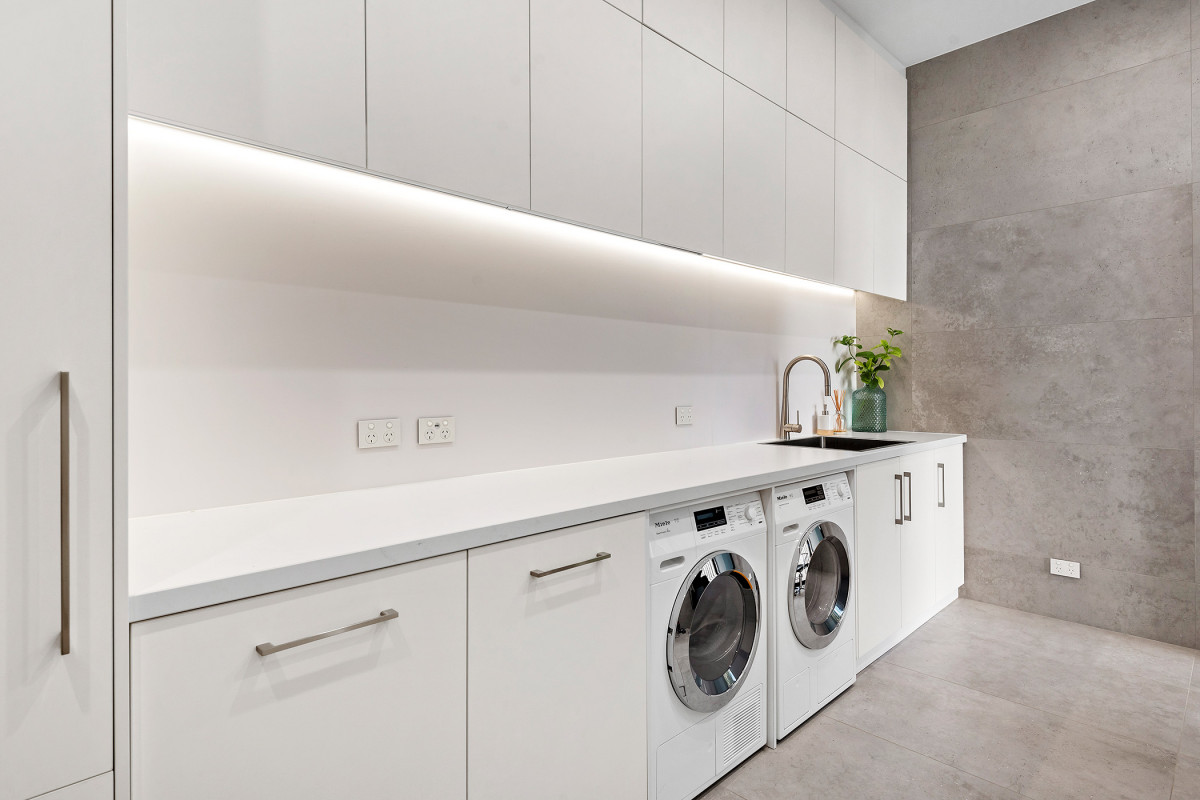 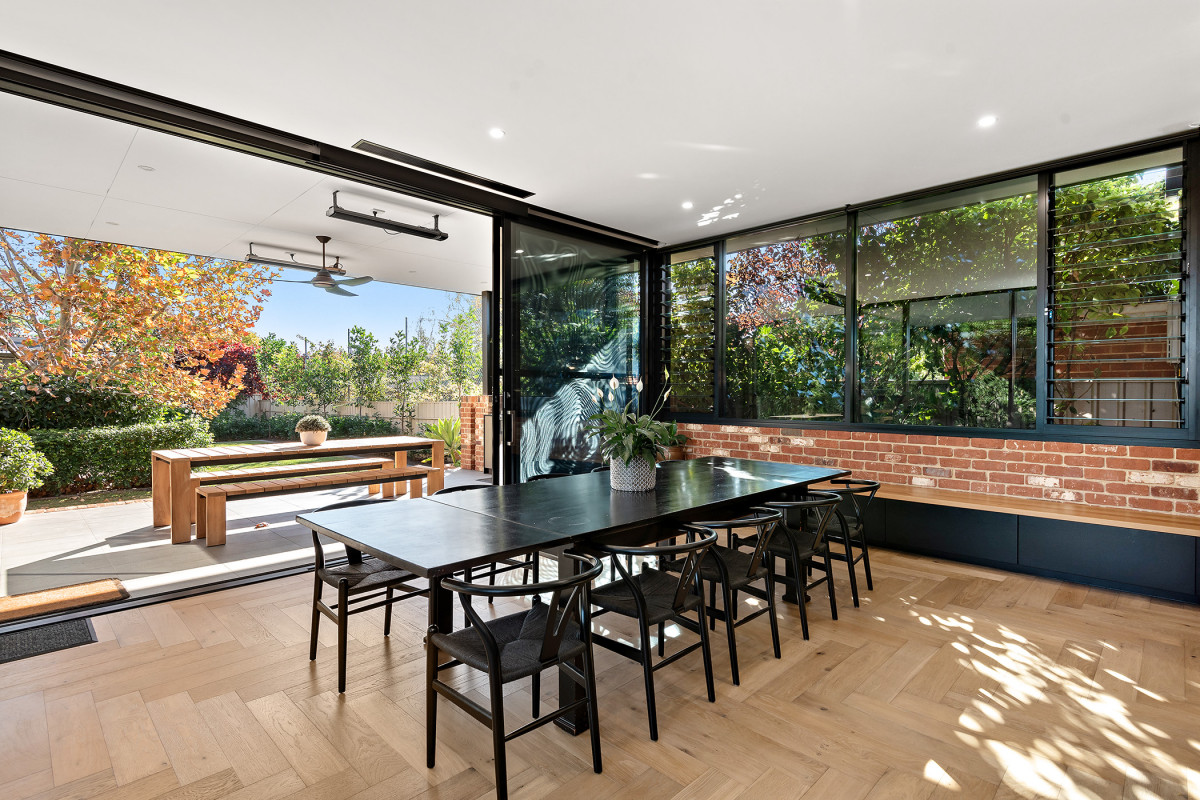