Set among 4000sqm of established Adelaide Hills gardens, this bold and beautiful family entertainer has surprises around every corner.

Built circa 1960 and modernised in 2010, “Birk Knott” is a mid-century two-storey home with contemporary styling, surrounded by a mature Adelaide Hills garden and sprawling lawns.

Adelaide Hills GP Don Wallis and his wife Andrea van de Water, who works in a management role in local government, purchased the home in 2013 and are now selling the property to downsize, having enjoyed every minute of living in the spectacular and stylish home.

“The day we saw it, we both fell in love with it immediately,” Don says.

“We separately worked our way around the house and garden, and met came back together and agreed we were in love with it. It’s just a beautiful house and it’s very much our style.” 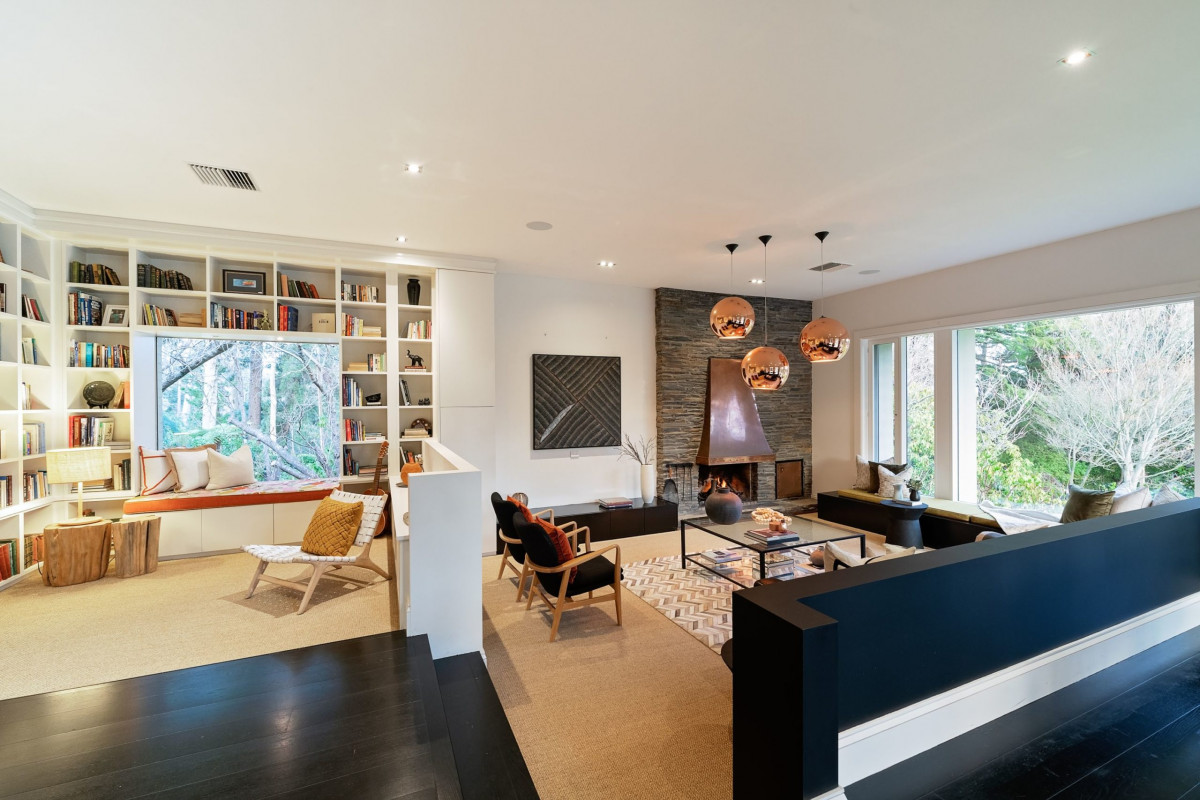 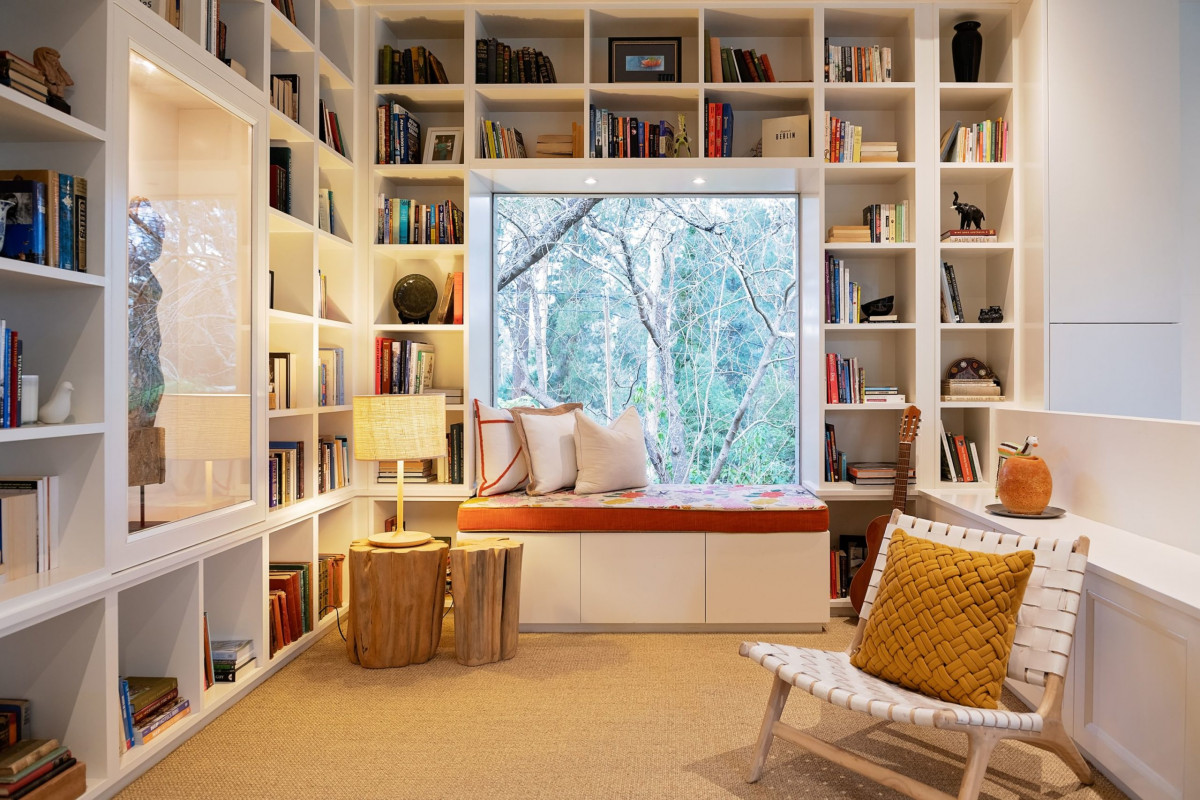 In 2010, the previous owner completed a substantial renovation designed by Williams Burton Architects. Today, the modernised family entertainer boasts five spacious bedrooms and three bathrooms — with one of the bedrooms currently set up as a cellar.

“The renovations were ahead of their time,” Don says.

“The thing that really wows people is the very New York chic style of interior design. The bathrooms all have very bold wallpaper, which just works. They’re elegant and stylish, but really bold.”

Two bathrooms boast vibrant zebra wallpaper patterns that were chosen by a previous owner, who is said to have been inspired by Jackie Kennedy Onassis’ use of the same pattern. 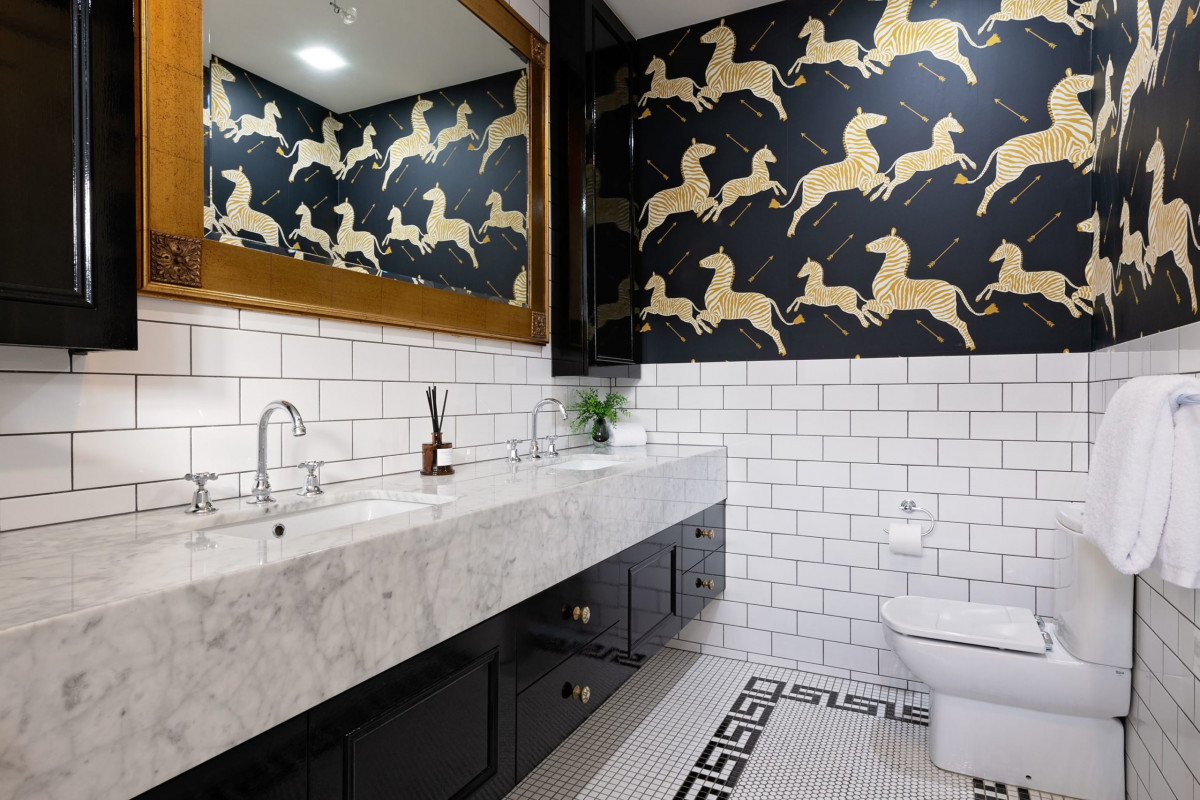 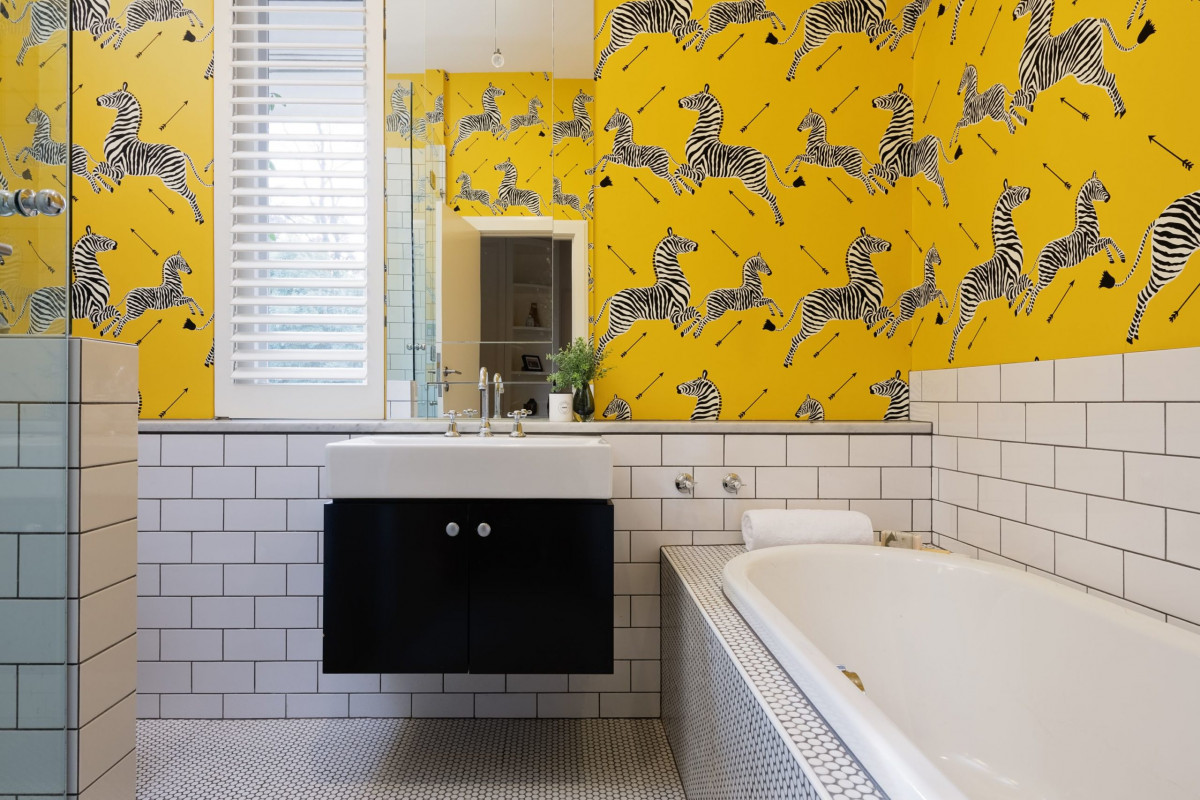 Created by textile designer Flora Scalamandre, the leaping zebra pattern was first made famous when it appeared in the 2001 cult classic film The Royal Tenenbaums.

“It’s an incredibly well-designed contemporary house that reeks of style and is surrounded by an established European garden,” Don says.

Don and Andrea have hosted many functions on the glorious grounds, including a wedding and an engagement party. Previous owners have also been known to use the grounds to entertain regularly.

“It’s been a fun house that has been ideal for hosting a lot of special occasions,” Don says. 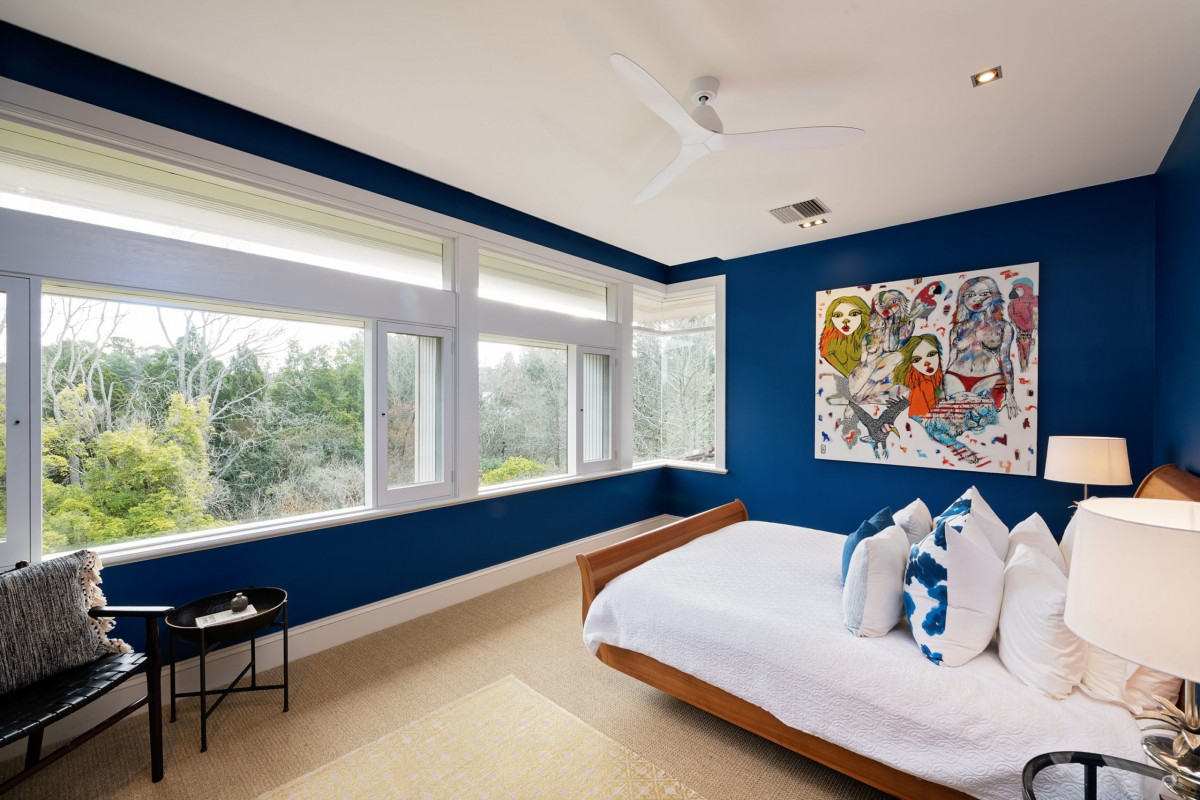 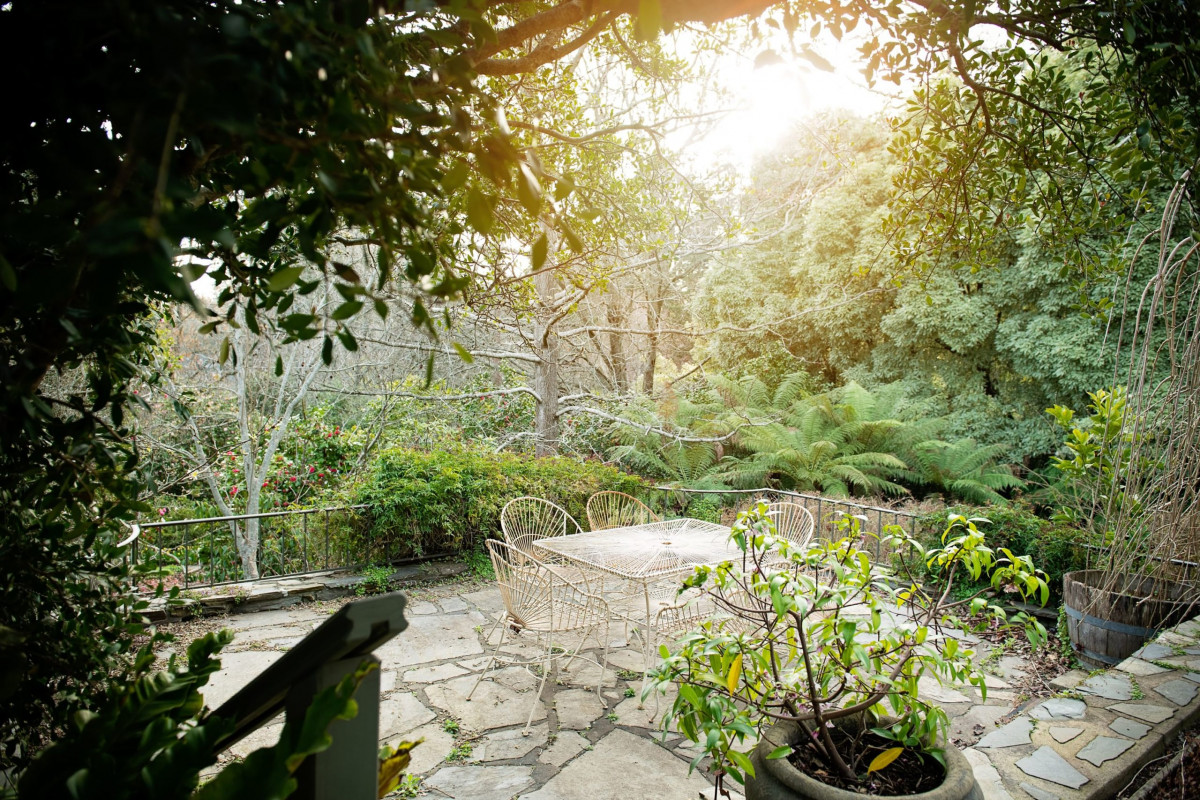 When it was built about the late 1950s, the owners set up an English-style garden with Hills favourites such as camellias, rhododendrons, and azaleas that now form a mature botanical setting of European and native flowering species.

The current owners have made improvements since purchasing the home seven years ago, such as retractable blinds, refurbishing the entrance and fencing upgrades.

“Preparing food in the kitchen with family and friends and enjoying views through the windows into an established garden is just stunning,” Don says. 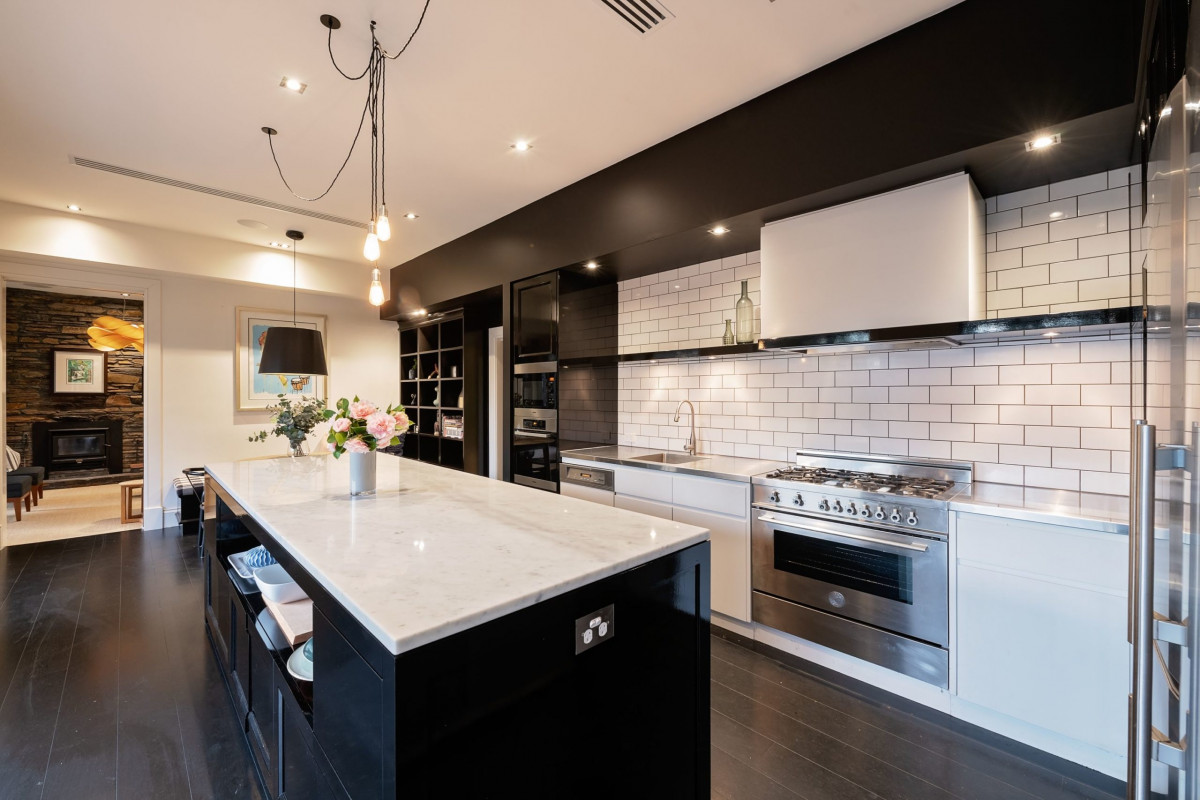 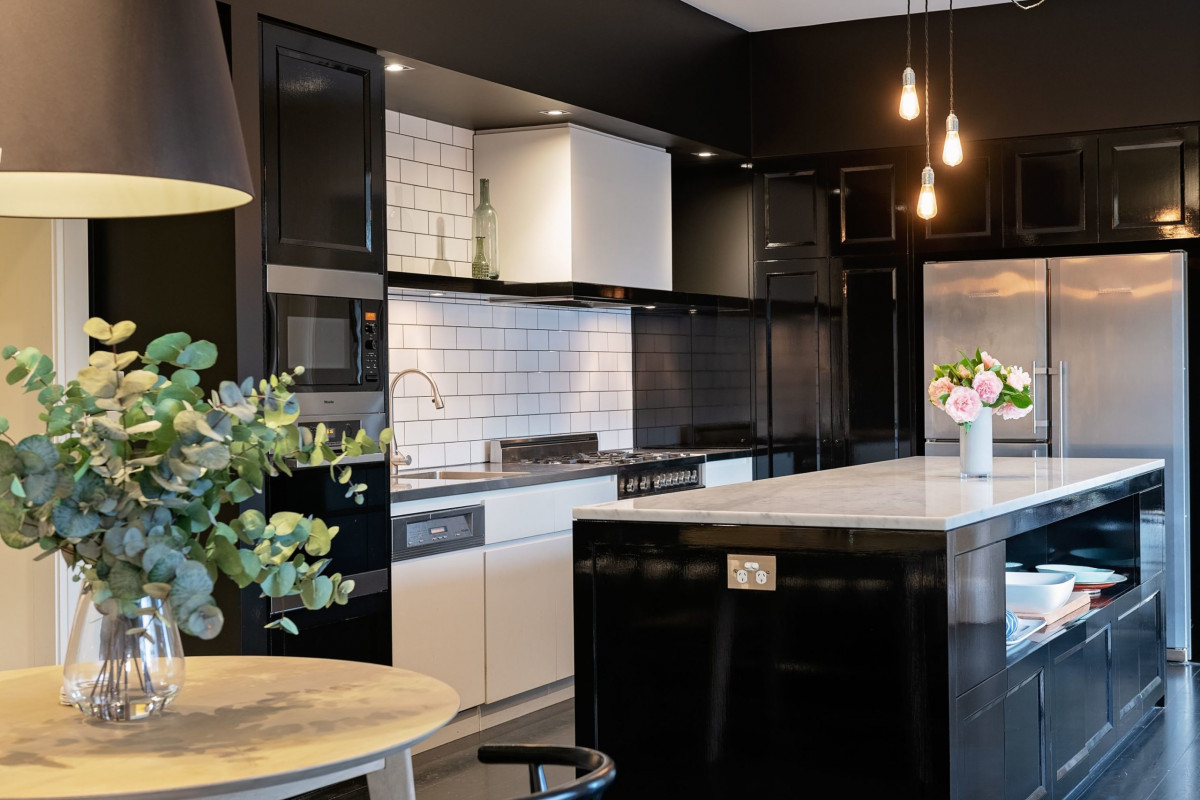 The front entranceway greets visitors with bold green wallpaper and patterns, with black and white flooring.

Adjacent the cosy sunken lounge and fireplace is a library with a recessed garden window and bench seat tucked between the bookcases.

There is a second living space on the southern side of the home, while a separate wing contains bedrooms and two bathrooms, perfect as a retreat for children or teenagers. 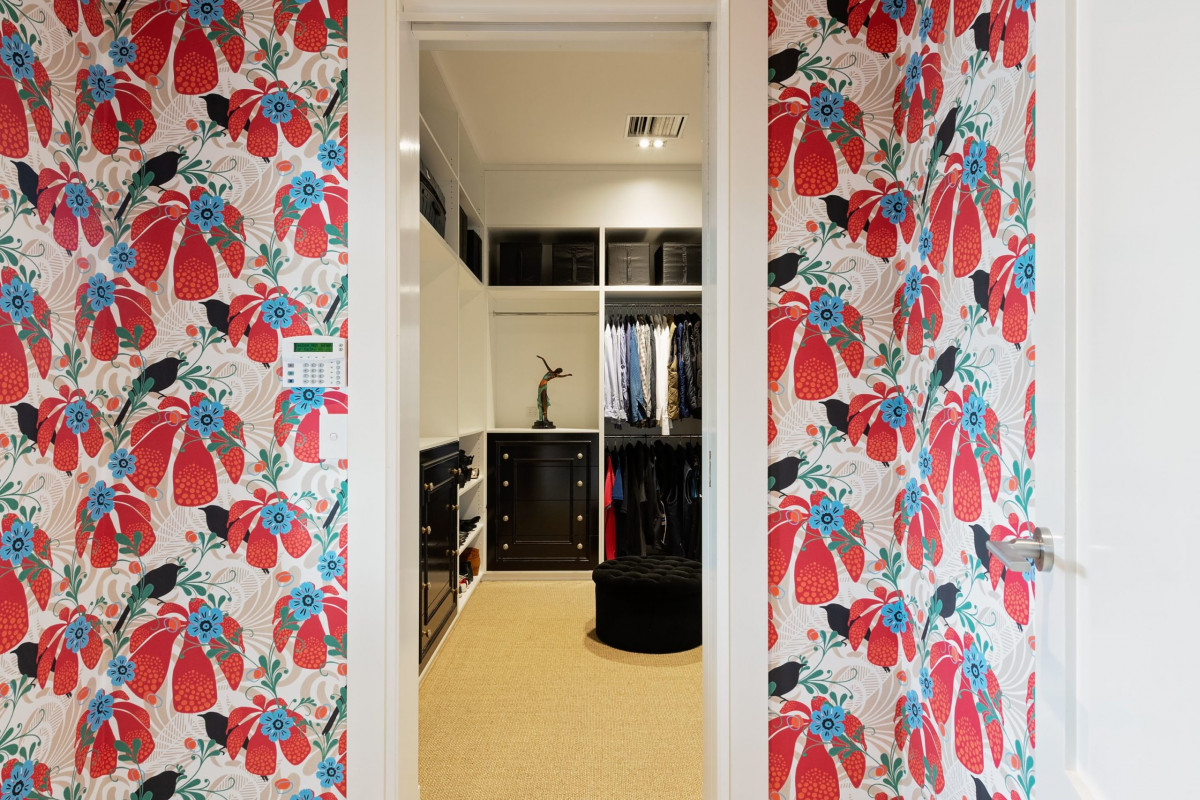 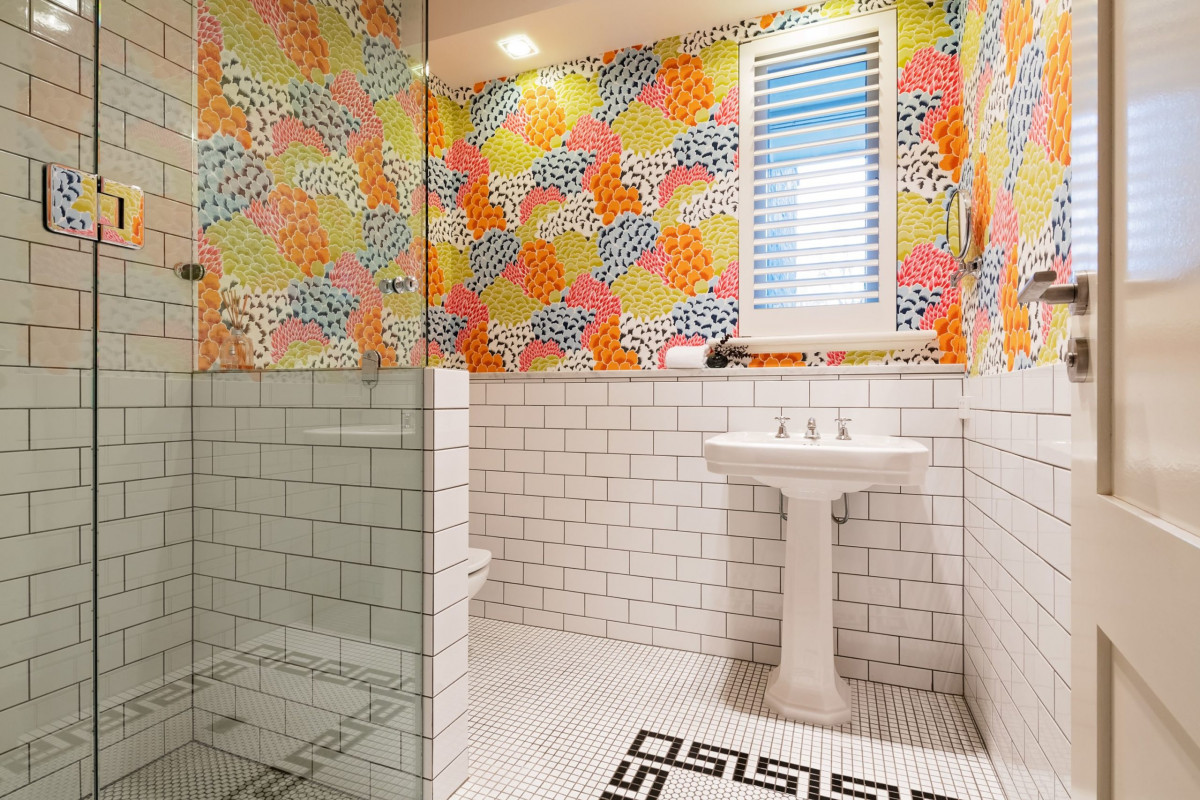 A substantial parents’ retreat is located on the upper level and comprises a bedroom, bathroom, dressing room plus a study with integrated cabinetry, with tree-top views of the surrounding gardens. This parent’s retreat is one of Don’s favourite features.

“In the upstairs bedroom, you wake up in the morning and with a push of a button the blinds go up, and you’re just looking straight out like you’re in a treehouse,” he says.

High-quality, contemporary ornamental pendant lights fit the style of the house, as well as the couples’ collection of artwork. 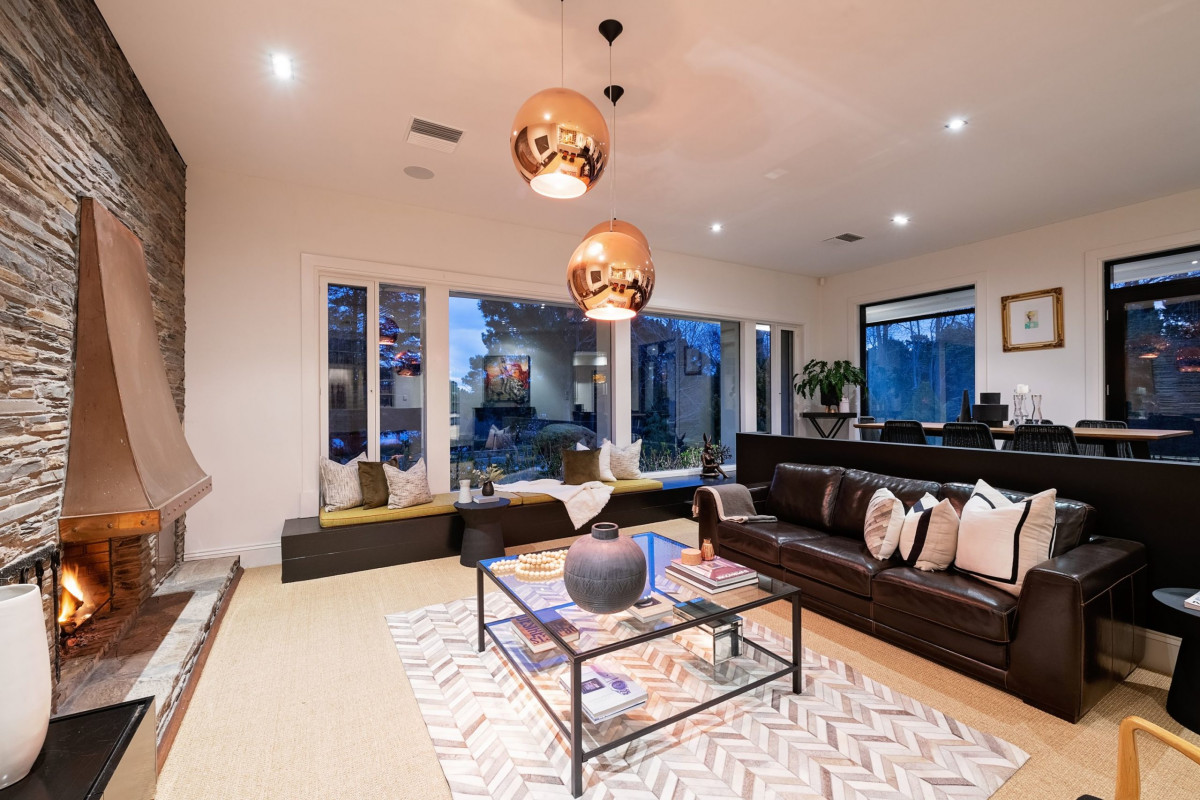 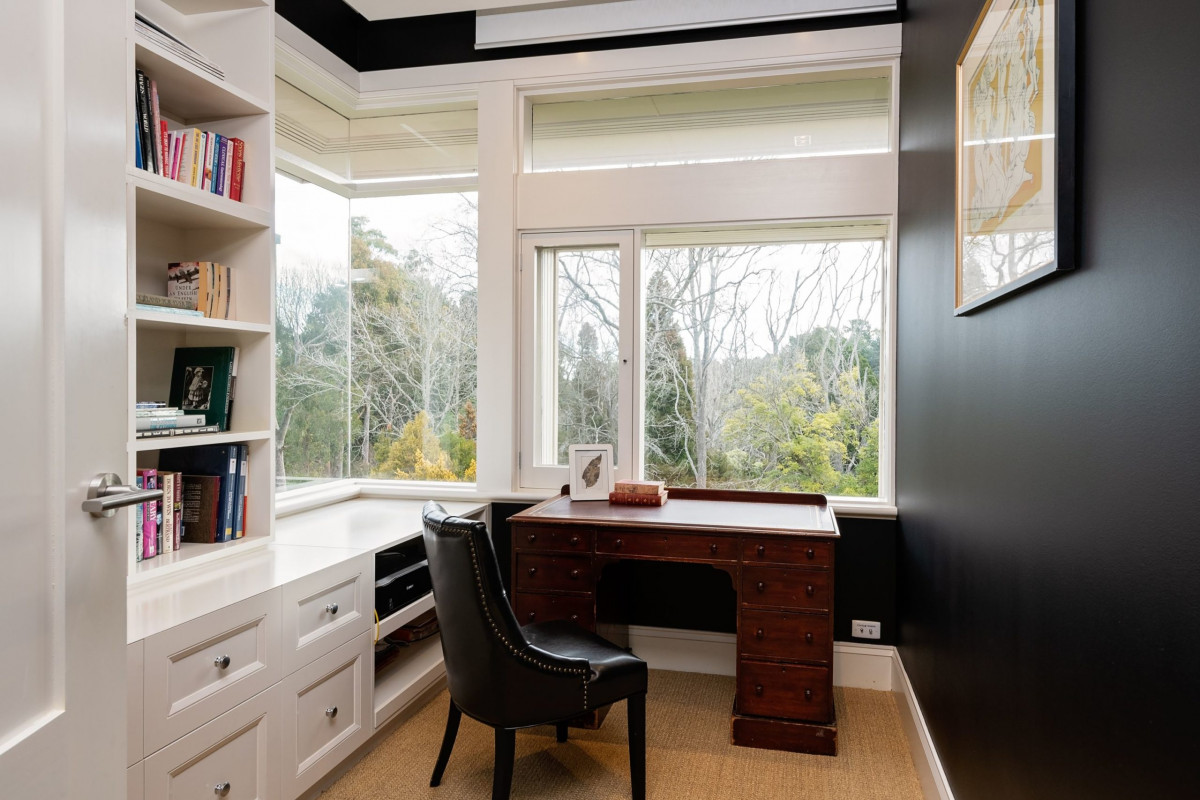 “We have some really contemporary paintings around the place. They’re all bold and beautiful, but the house is bold as well.

“We’ve loved every minute but it’s time to downsize so someone else can have fun here.”

The sale is being handled by Josh Biggs and Jack Hodgson of Harris Real Estate. 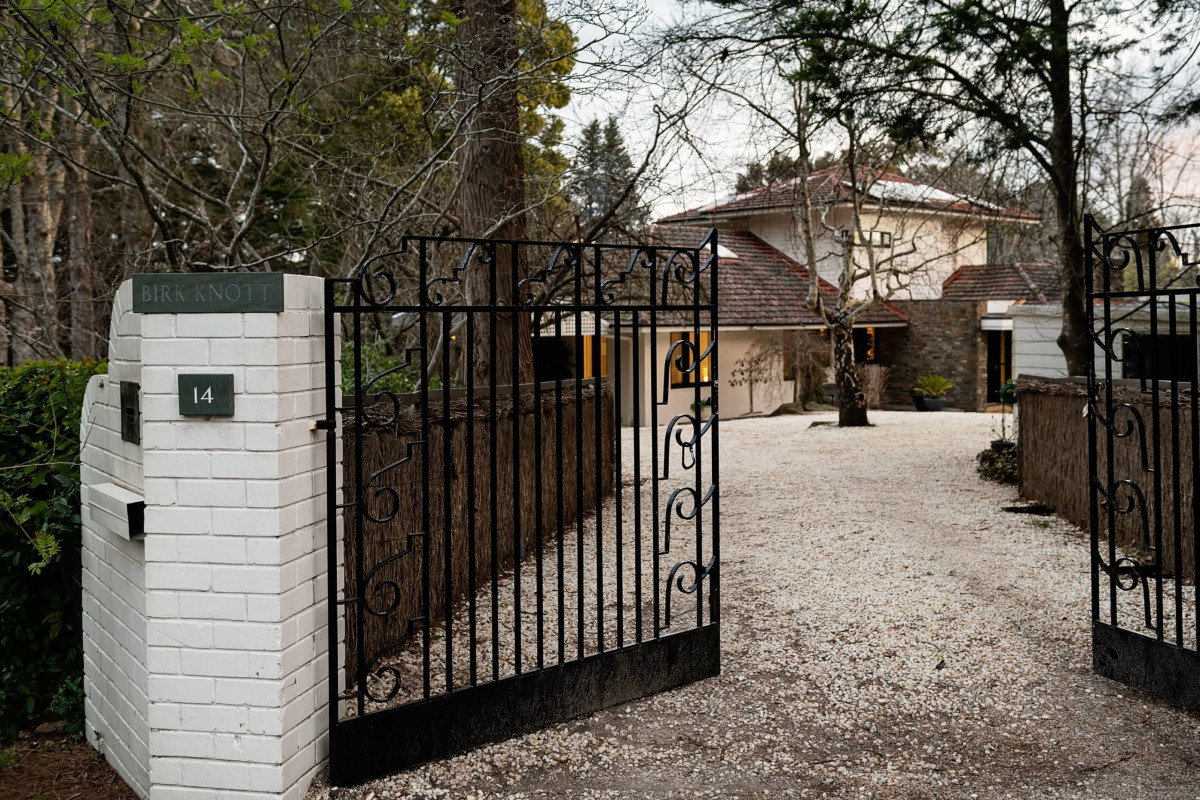 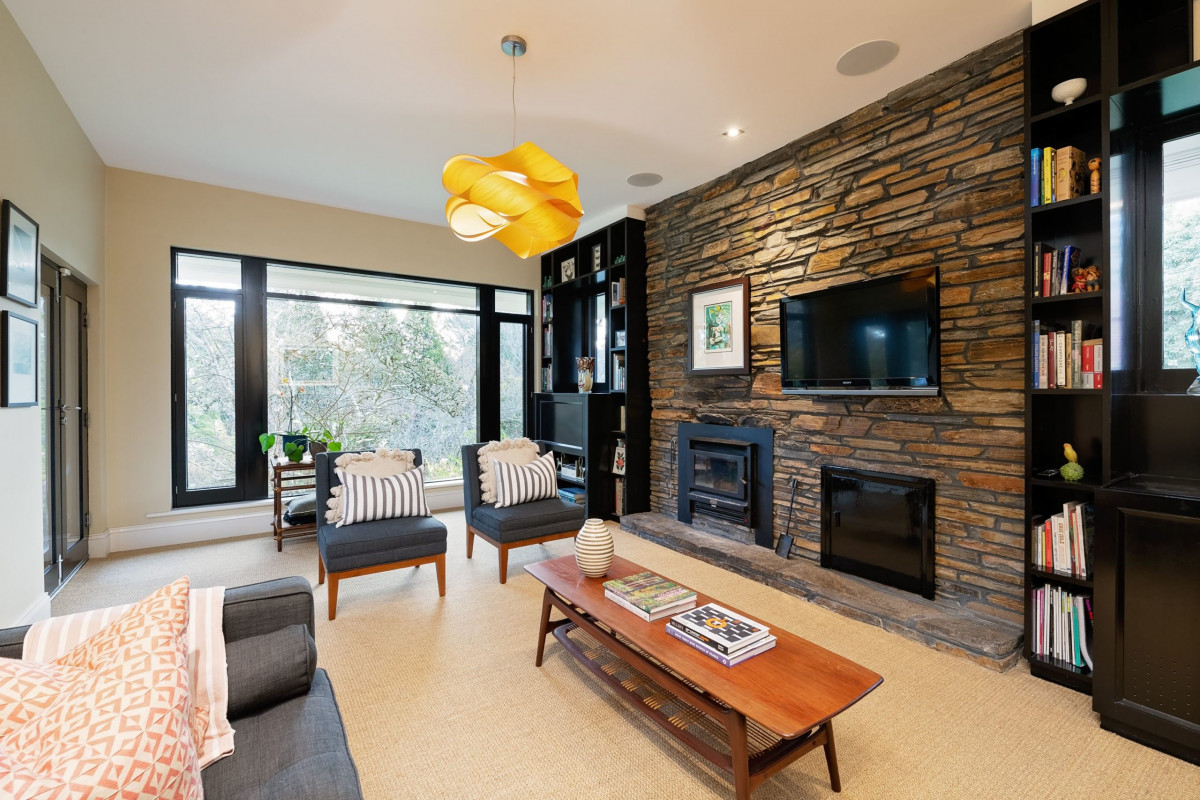 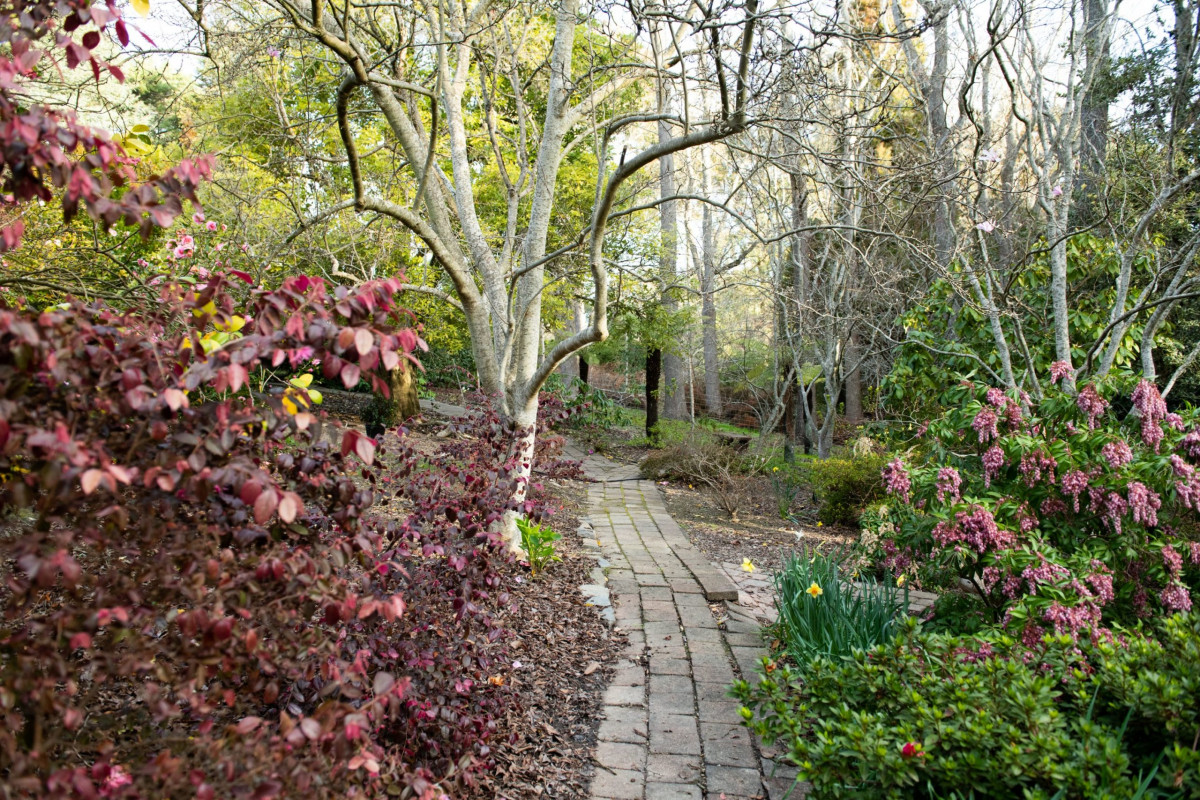 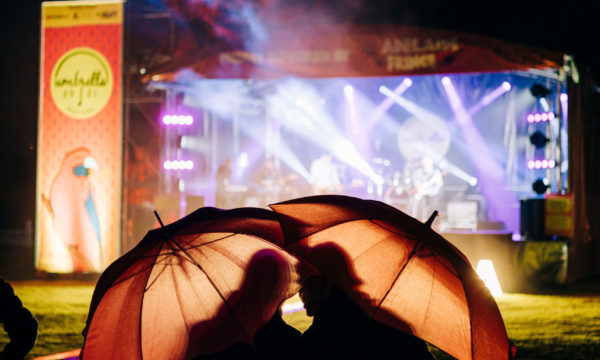 What’s On: Live music, winter eating and Elvis for wombats

This weekend, shop till you drop at the Boho Luxe Markets or indulge in South Australian produce with the Tasting Australia Winter Series.