Inspired by a European way of life and built to a high standard, a bespoke Adelaide Hills gem is on the market this week.

At 2 Oakbank Street in Stirling, passers-by often stop to express their admiration of the property’s rustic front gates.

Imported from Europe where they once adorned a French chateau, the gates were purchased by wine industry professionals Greg and Inca Pearce long before they even put pen to paper to design their contemporary Adelaide Hills home.

The 1800s hand-forged cast-iron gates are an integral part of the property, so much so that many of the dimensions of the home were dictated by the width of the gates.

The home was built in 2014, with the gates left untouched in their original rustic state, despite tradies regularly suggesting the owners should sandblast and paint them. But the authentic pieces, made of high-carbon steel, will last for decades to come.

“They’re a signature of the house,” says Greg. 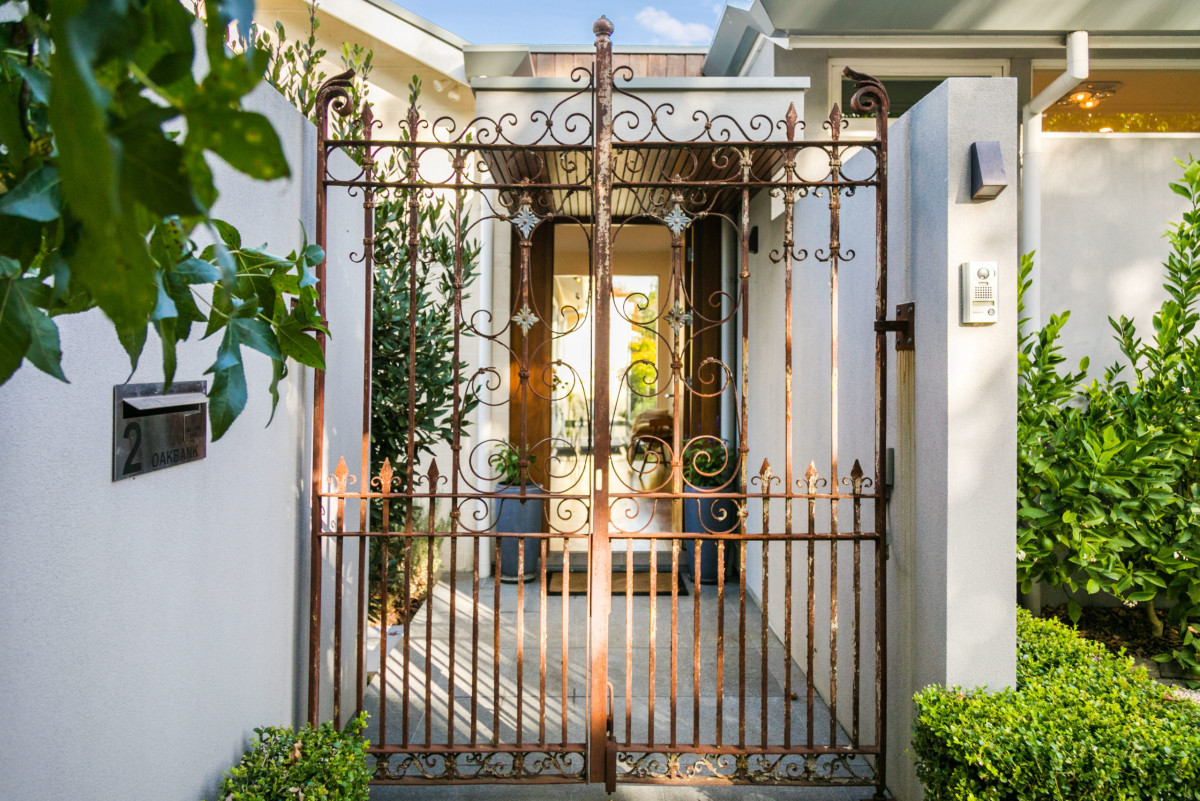 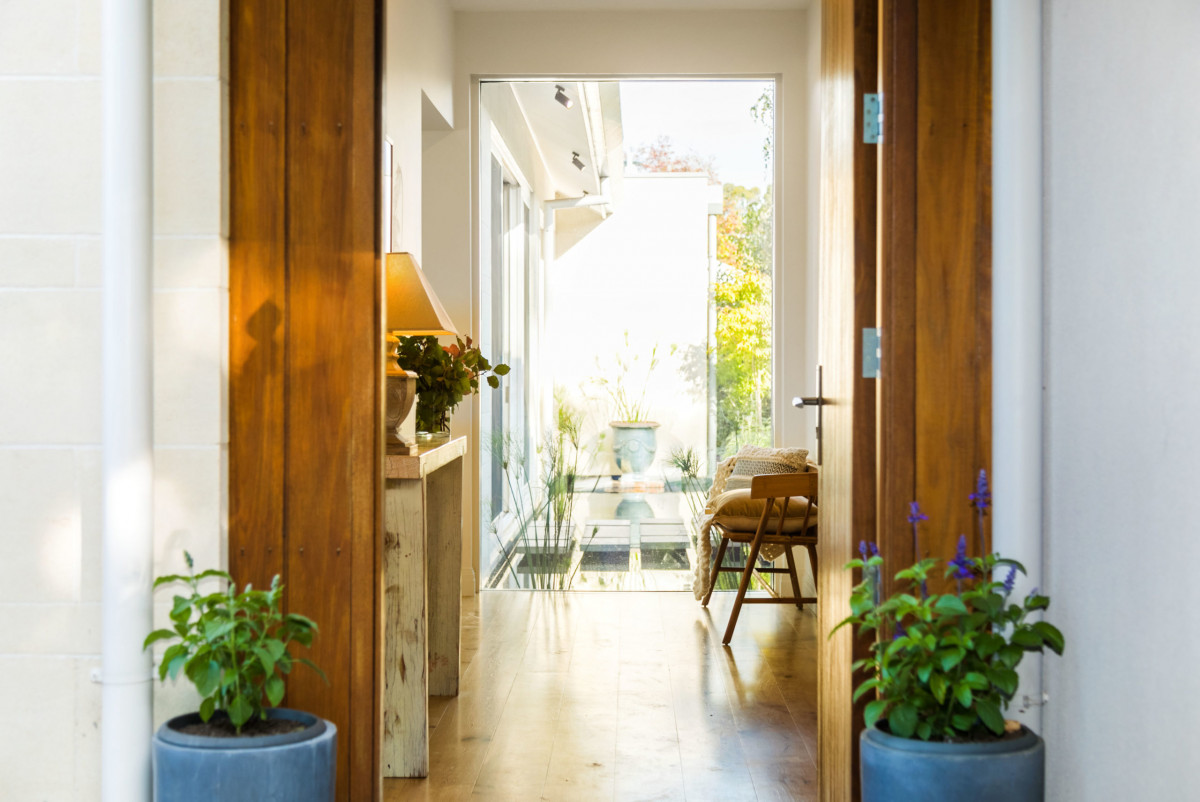 Having experienced the satisfaction of building their own home to such a high standard, the couple is selling the property at 2 Oakbank Street to move on to their next project.

“We’re looking for our next adventure. Building’s a hard task, but it’s very rewarding and we enjoyed it immensely,” Greg says.

With new and contemporary homes hard to come by in Stirling, the home is expected to garner plenty of attention. “We built this home to live in — it really is a quality build.”

Boasting a high level of attention to detail and craftsmanship, the home features 3.3-metre ceilings, extensive double glazing, reflection pond, and a double-sided fireplace that sits on a polished concrete hearth. 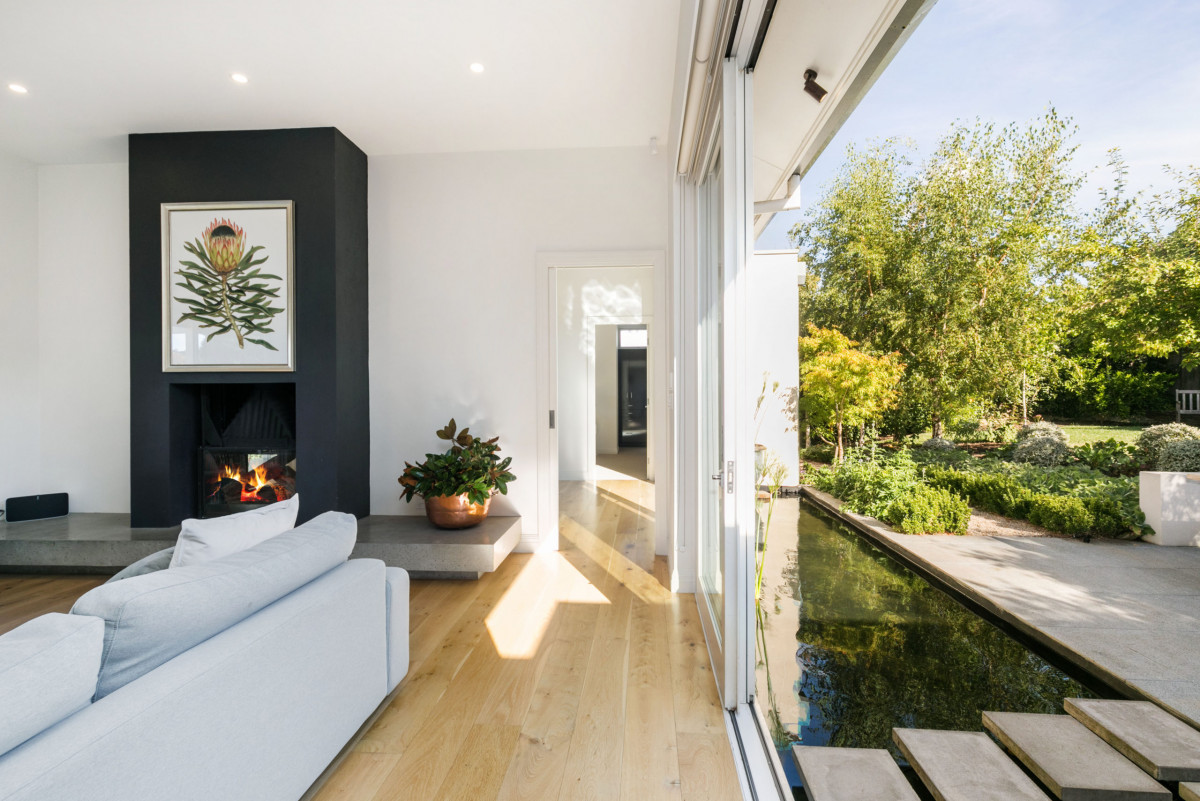 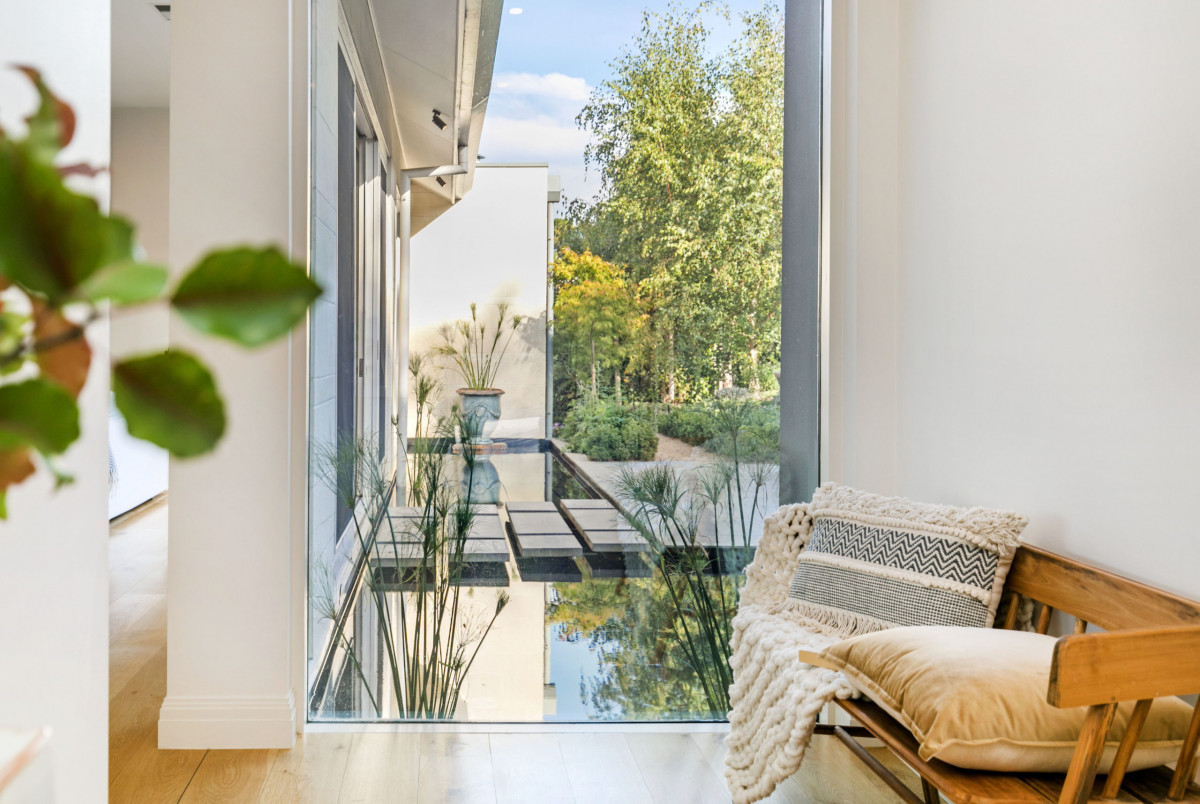 The build included the installation of a large wine cellar, which encompasses the whole underfloor space of the lounge/study area.

“Having access to an underground cellar in a new house is a great luxury,” Greg says.

The couple previously lived in the home next door and during this time often visited their neighbour who then owned the property. He was a local artist and a colourful and endearing character.

“We’d sit in the sunroom chatting with him and were struck by how the light would come into that room from three directions, and that has certainly been replicated in the new house.” 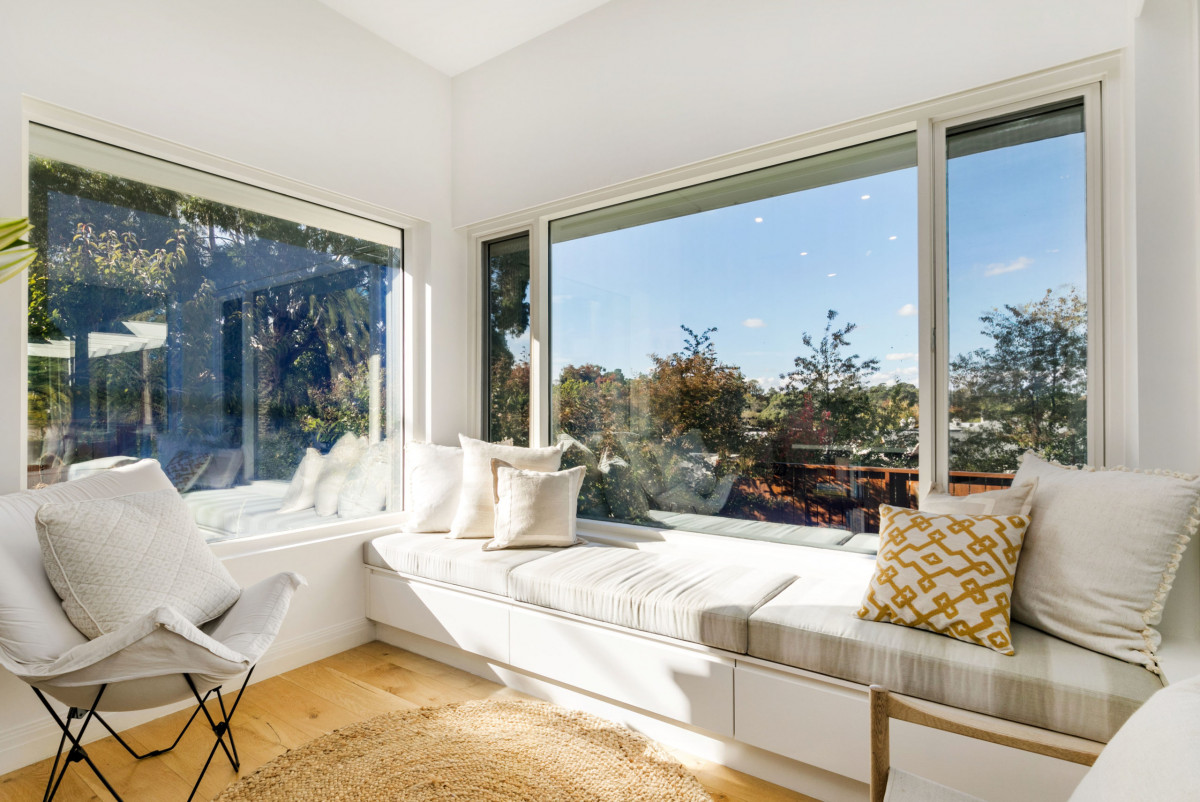 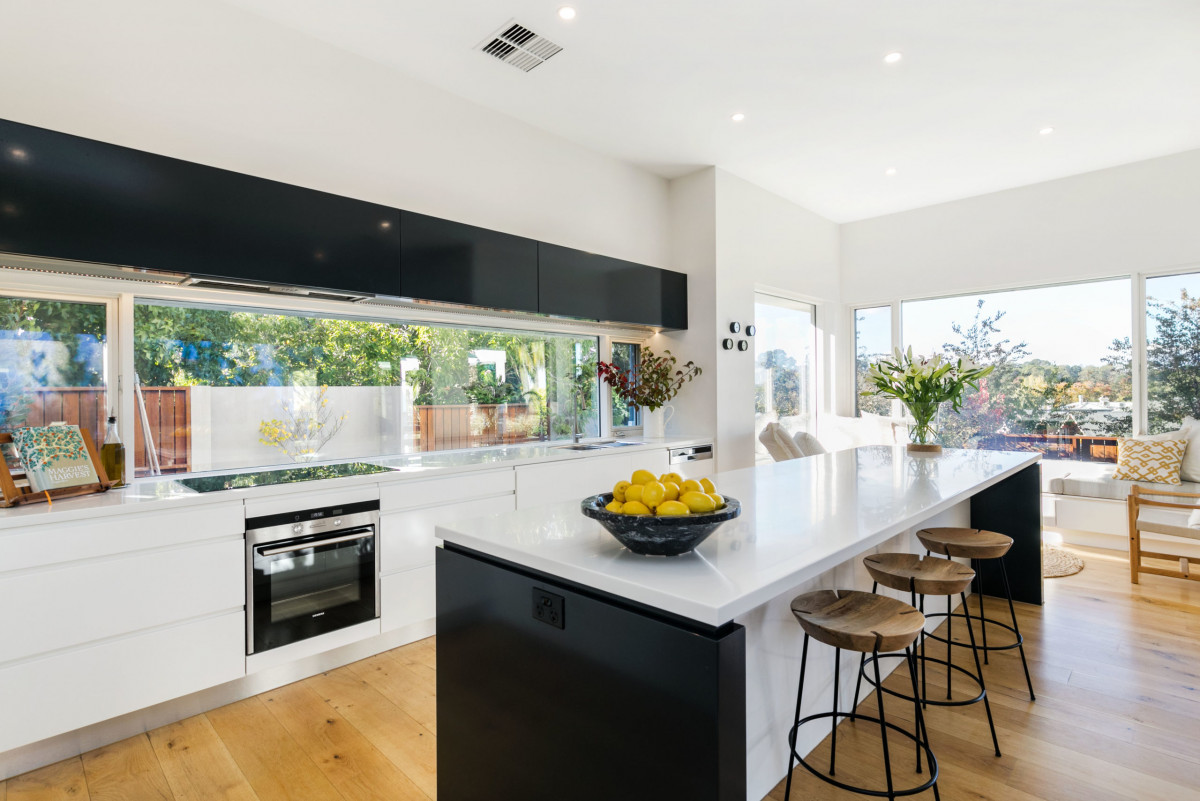 They purchased the property about nine years ago to create a contemporary home that pays homage to the previous structure; particularly the new sunroom nook, which is encapsulated by large double-glazed window panes.

Finding new interpretations of the former home’s design cues, the free-flowing house was created with family in mind, boasting four bedrooms, two bathrooms, all on a block of 839sqm.

“It’s full of life and accessibility,” Greg says. “It’s a family home in a vibrant location in Stirling, there’s no doubt about that.”

The foliage, stone, and timber of the garden and fencing provide complete privacy and sound insulation — further enhanced by the double glazing inside the home, allowing the inhabitants to completely shut off from the outside world.

Sliding doors on both sides of the living area allow seamless movement between the open plan living zone and the expansive spotted gum deck on one side. 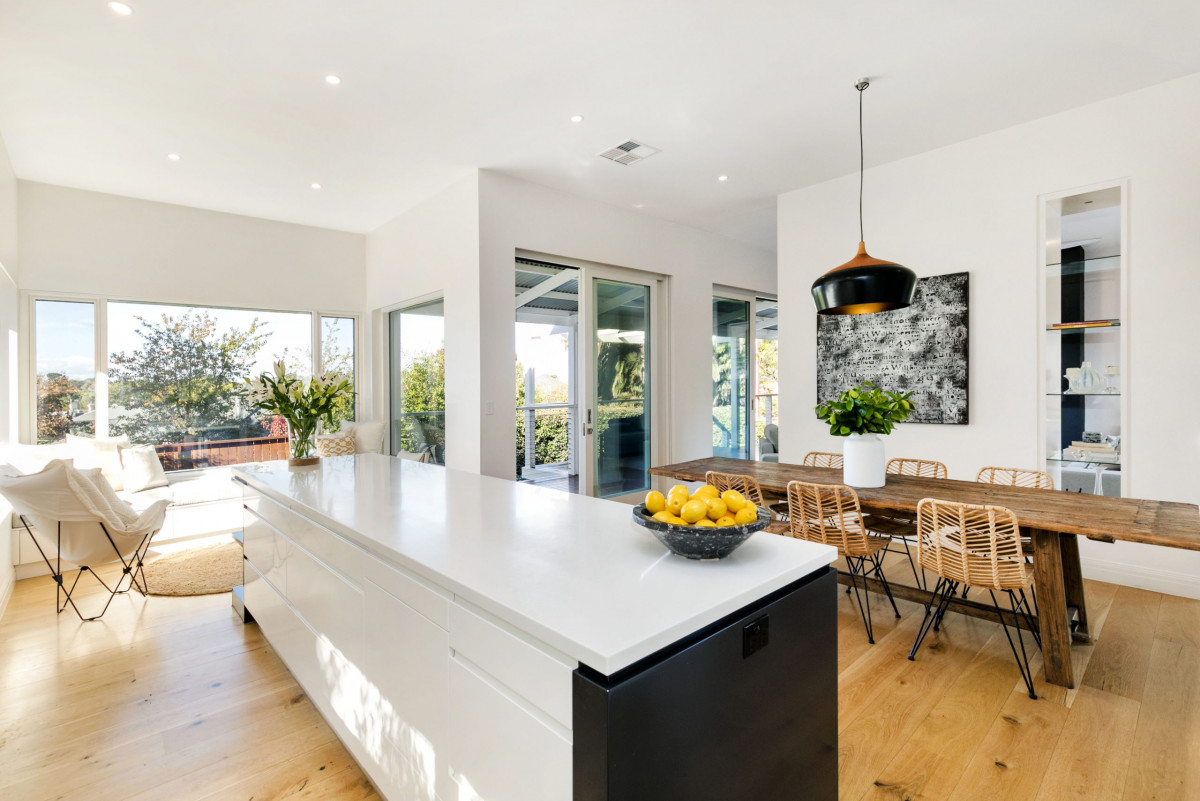 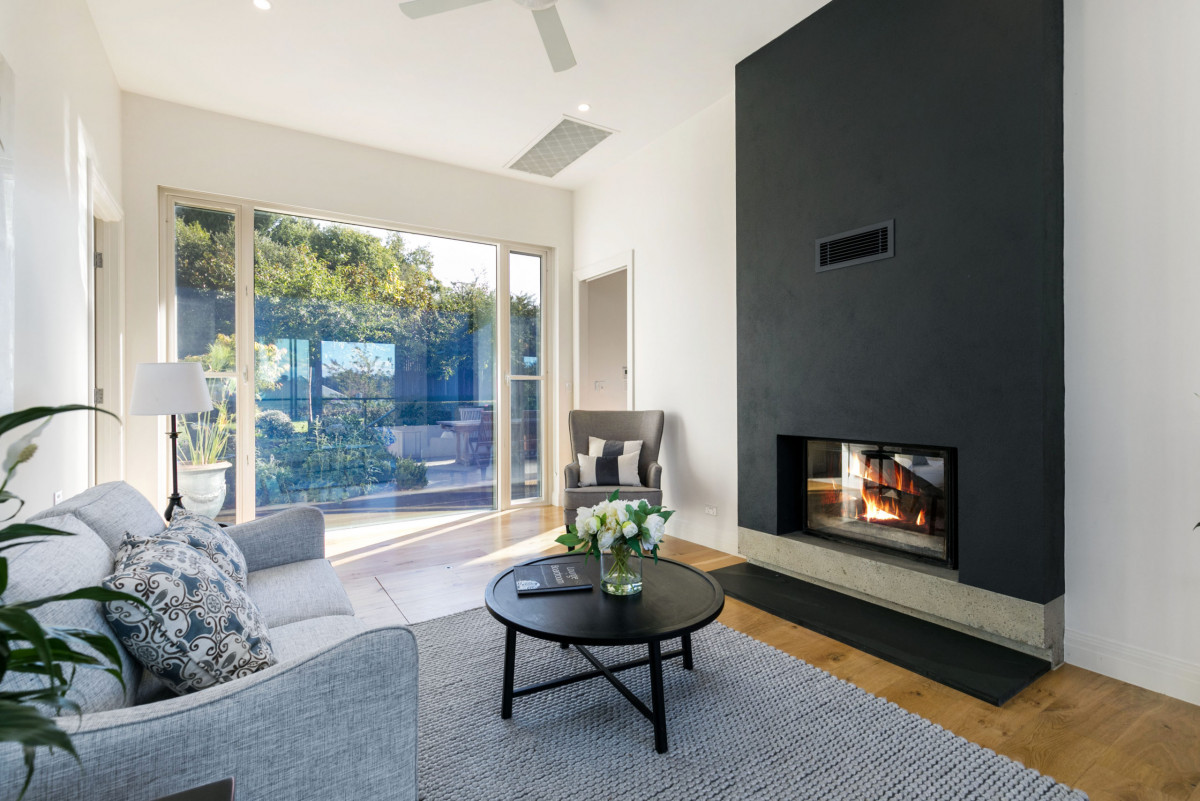 Upon entering the home, there are a couple of striking features. The modest street frontage belies the voluminous size of the home, while the protection from street noise is also unexpected.

“It has a relatively modest street presence, so people are taken aback by the size and scale of the house and back yard, but also how quiet it is,” he says.

“While you can open the doors and enjoy this wonderful vibrancy, with the feeling of being in the hum of Stirling, the moment you seal the doors you’re completely protected and you would have no idea that you’re right in the middle of one of the most vibrant towns in the Adelaide Hills.”

The main pavilion of the home is saturated in dappled natural light, with large panes of glass walling, looking out to the garden, and the green of the Japanese maples. 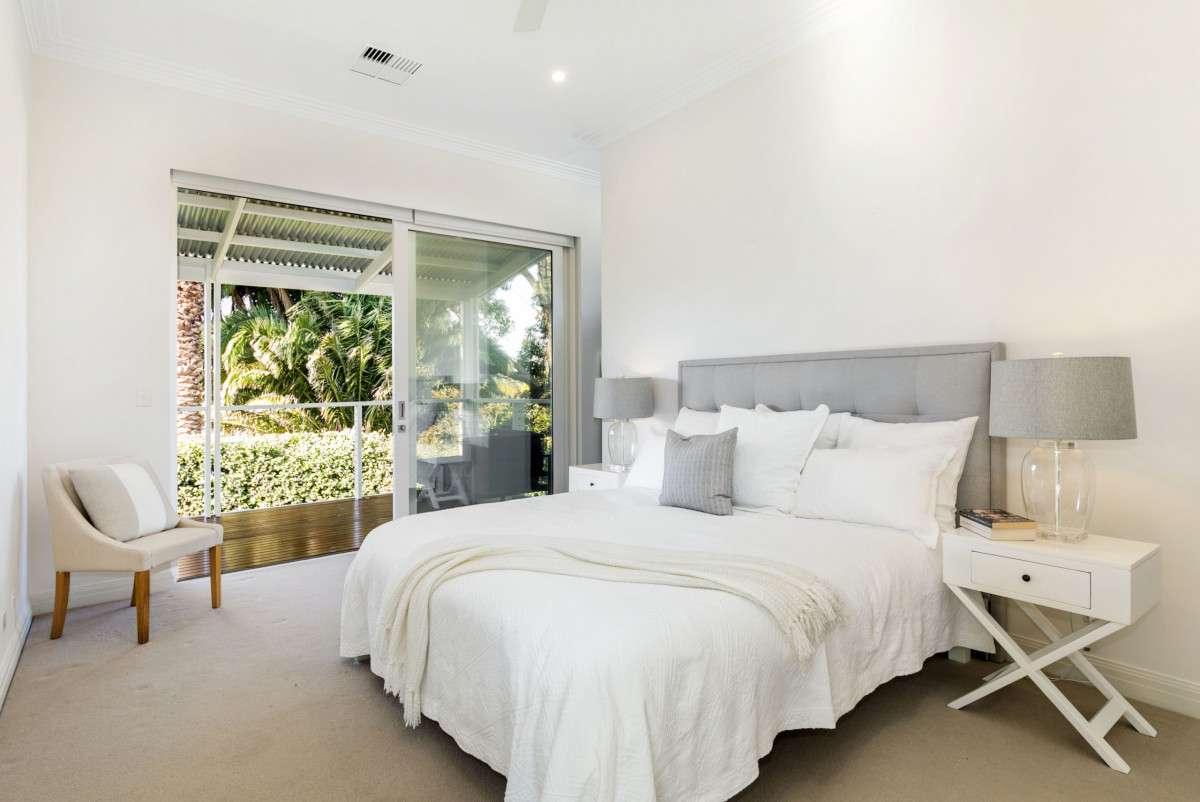 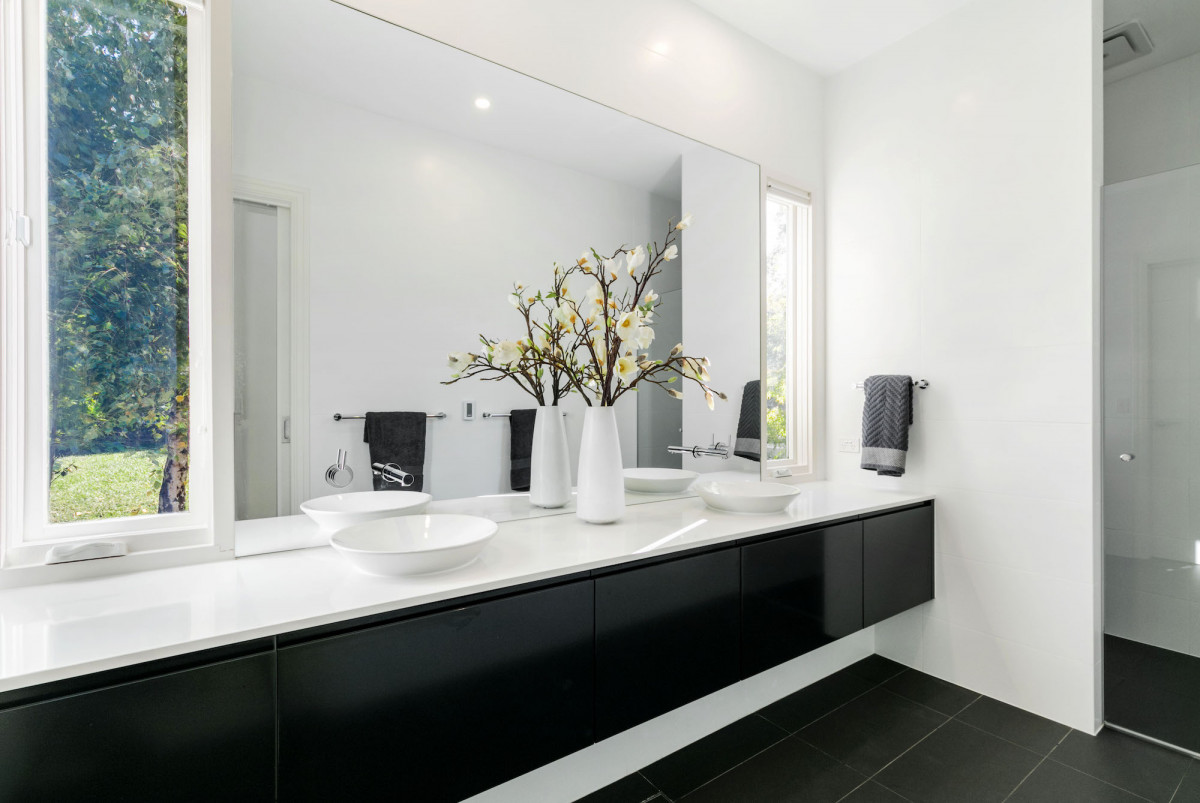 “The double glazing in the main pavilion provides tremendous thermal insulation but, unbeknown to us at the time, its sound insulation is extraordinary,” he says.

Opening out onto the private verandah, a parents’ retreat features an indulgent en suite bathroom with underfloor heating, dual vanities, and an extensive walk-in wardrobe.

The hand-built stone walls are also a regular sight in the northern Adelaide Hills. Greg collected the stone from Kanmantoo quarry, all the while learning the trade from books, and toiling over many weekends and evenings to complete the walls to a high standard.

“The pleached magnolias in the back yard are inspired by the formal gardens that we saw in Paris, while the gravel pathways in-between the raised vegetable patches really are a tilt of the hat to the traditional farmhouse gardens you’d see in France,” he says. 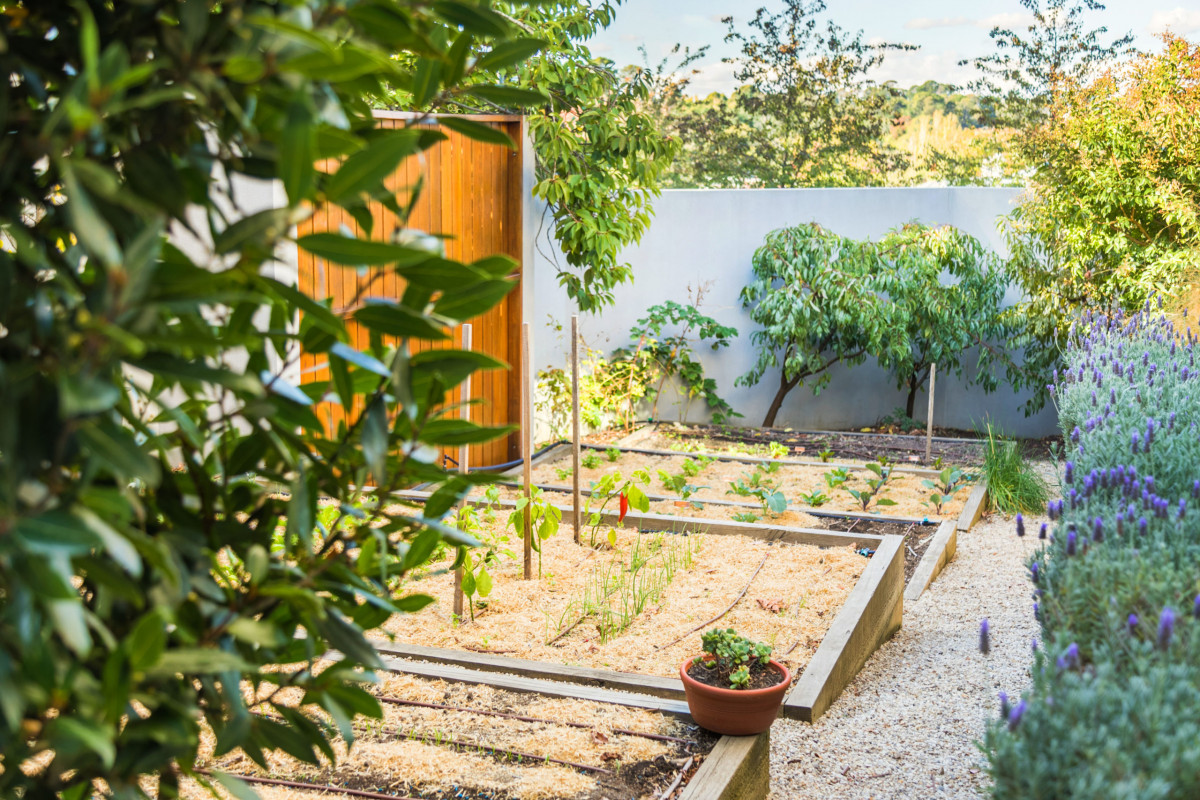 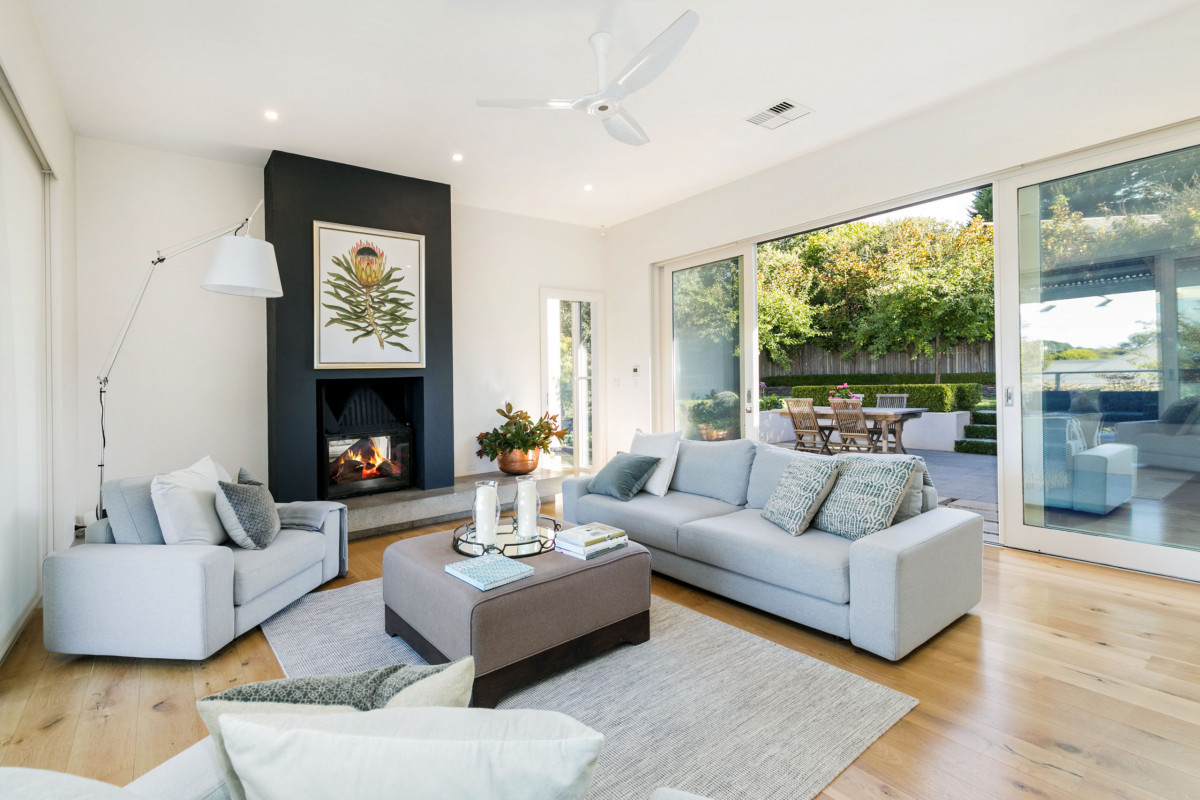 “I spent some time riding my pushbike around the Alps and the Pyrenees, where villages were full of these beautiful well-tended vegetable patches with formalised edges and gravel pathways. They’re presented for house pride.”

The vegetable patch is located so it can be viewed from the kitchen, allowing the cook to see what’s growing.

Sitting on a polished concrete hearth, the Cheminees Philippe double-sided fireplace also carries European inspiration and is another integral design feature of the house. Sustainable living was a focus during the design and building phases.

“The fire provides a wonderfully warm, non-drying heat. But the hearth itself actually becomes like a radiator with a gentle heat that permeates throughout the whole house,” Greg says.

“Some people hate building and say they’ll never build again. But we really loved bringing a vision to fruition in such a tactile way, and look forward to doing that again.”

The sale is being handled by Josh Biggs and Jack Hodgson of Harris Real Estate. 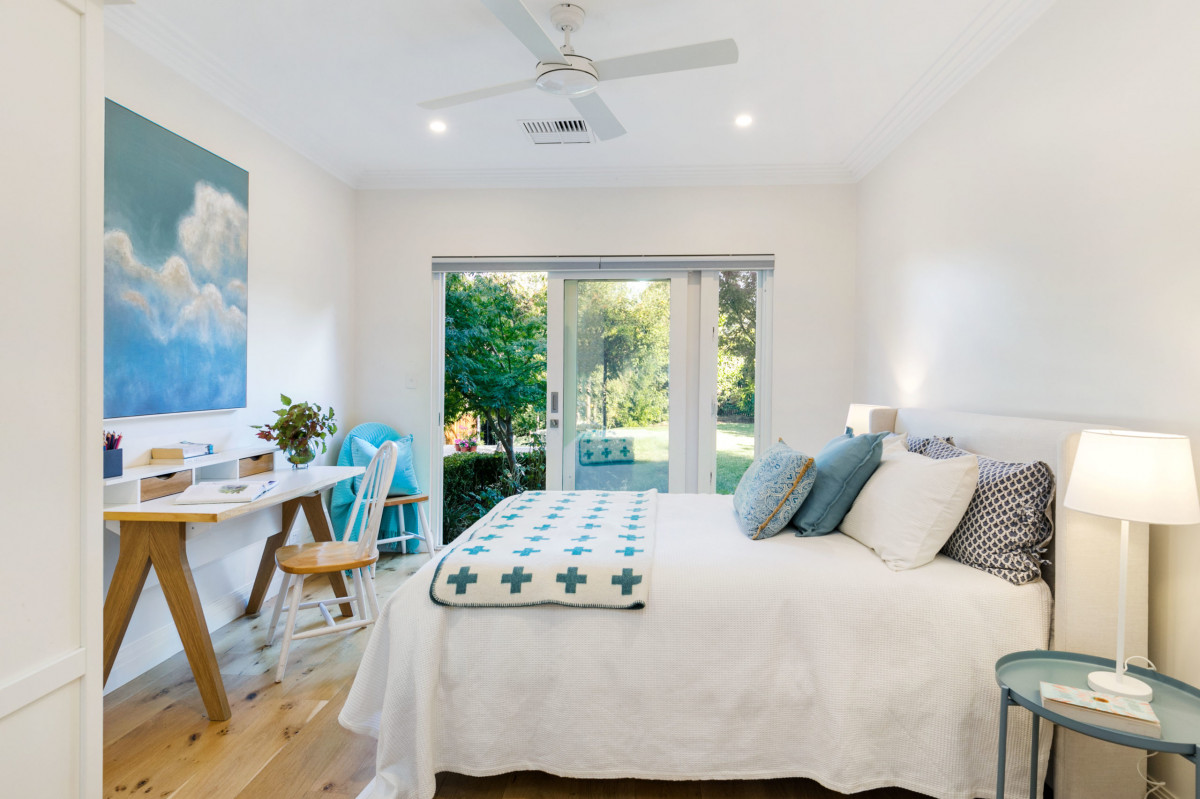 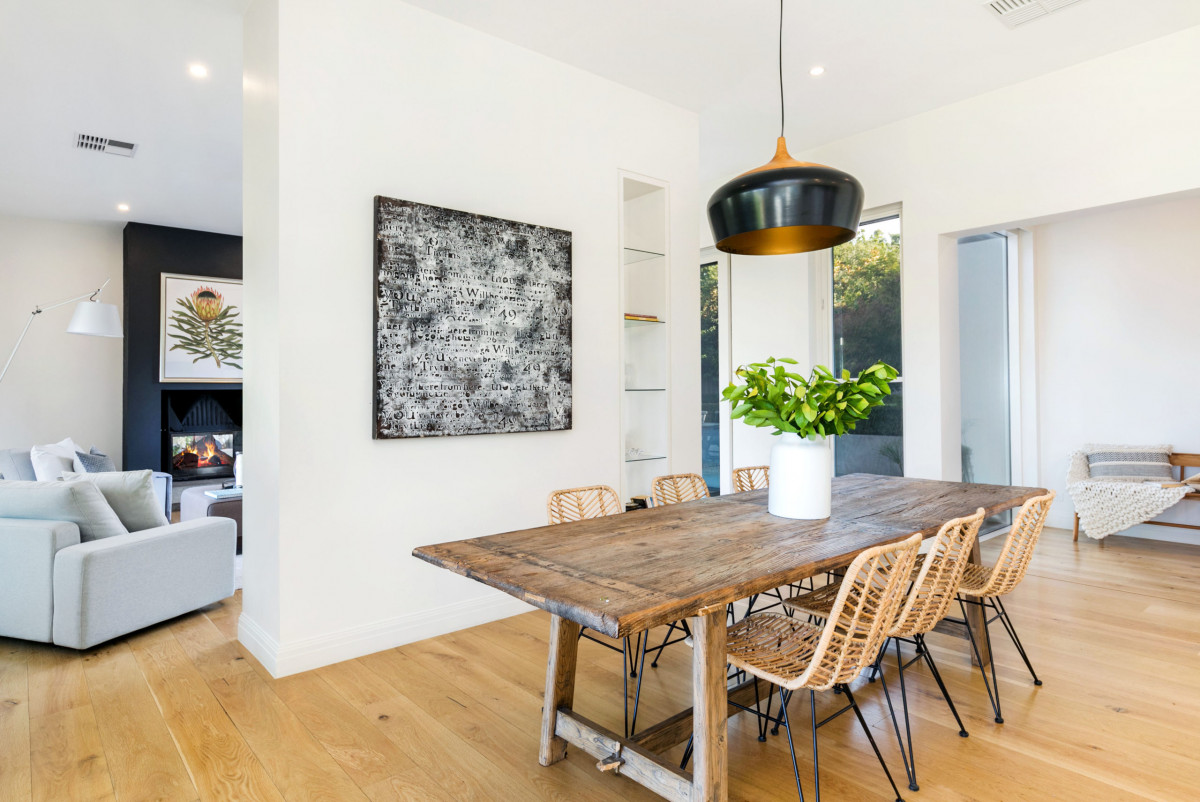 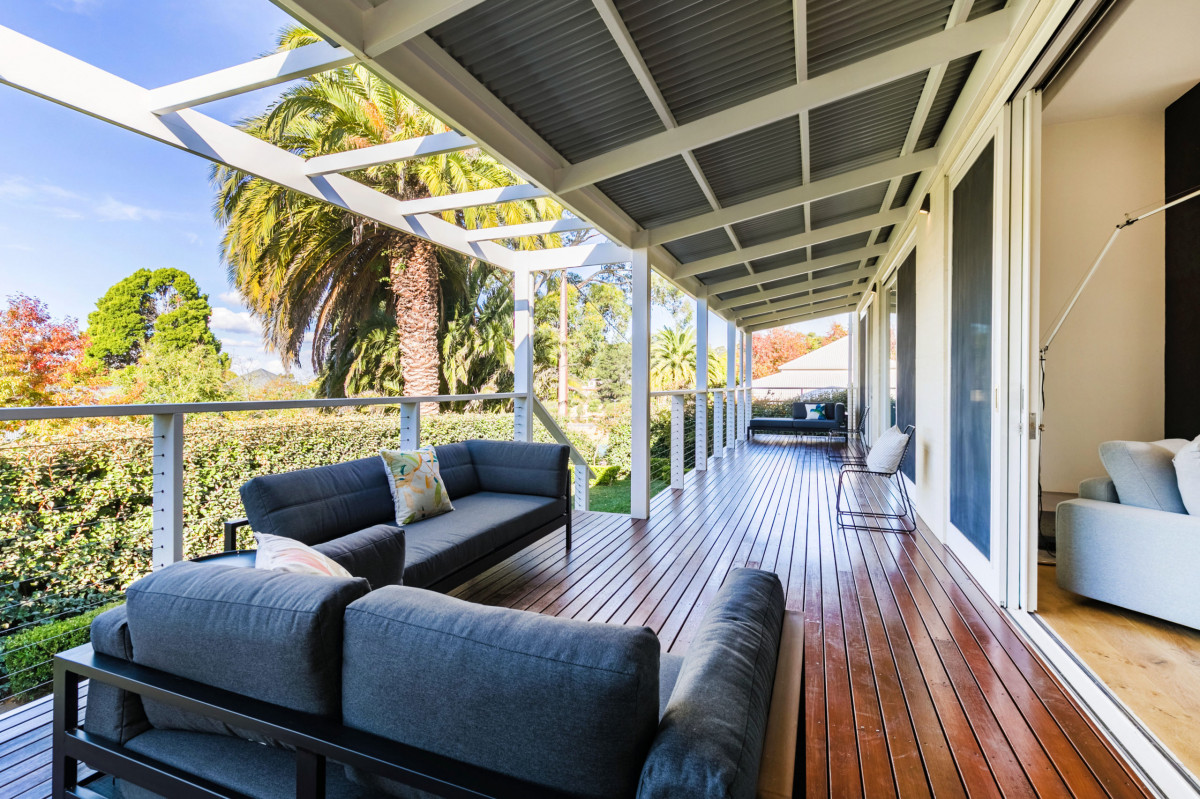 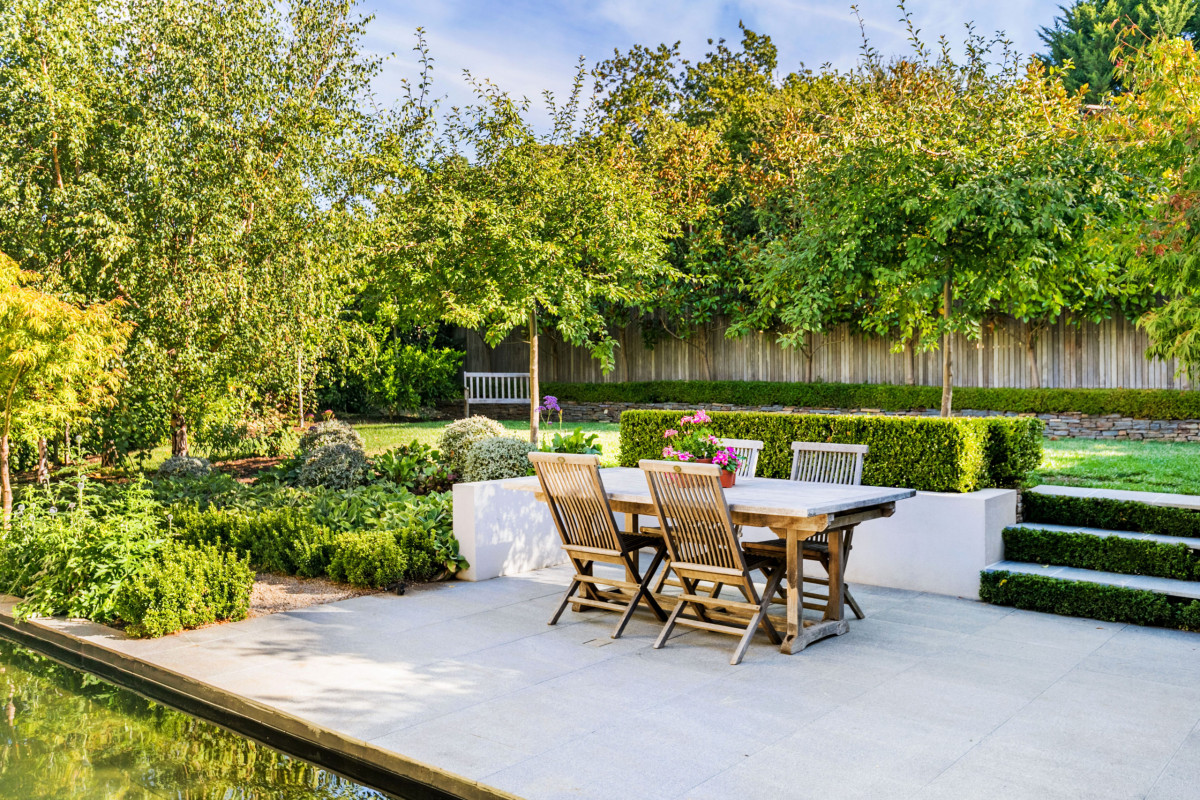