Frank and Maria Mantovan could have subdivided their 1026-square-metre block at Norwood, but instead renovated and extended the sandstone villa to create one of the suburb’s most impressive and sophisticated addresses.

The symmetrical sandstone villa at 18 George Street was in a tired and unloved condition when Frank Mantovan first set eyes on the property, which occupied two titles across 1026 square metres.

Living at St Peter’s with his wife Maria and their two children, Frank would often drive past the house on George Street on the way to drop his daughter off at school.

“Every time I’d drive past this house I thought that I’d love to buy it one day if it ever came on the market,” Frank says.

“You could see that it was a house that had been let go — no one had done anything with it, probably since the 50s. Honestly, my wife and I had our eyes on this place for at least five or six years.” 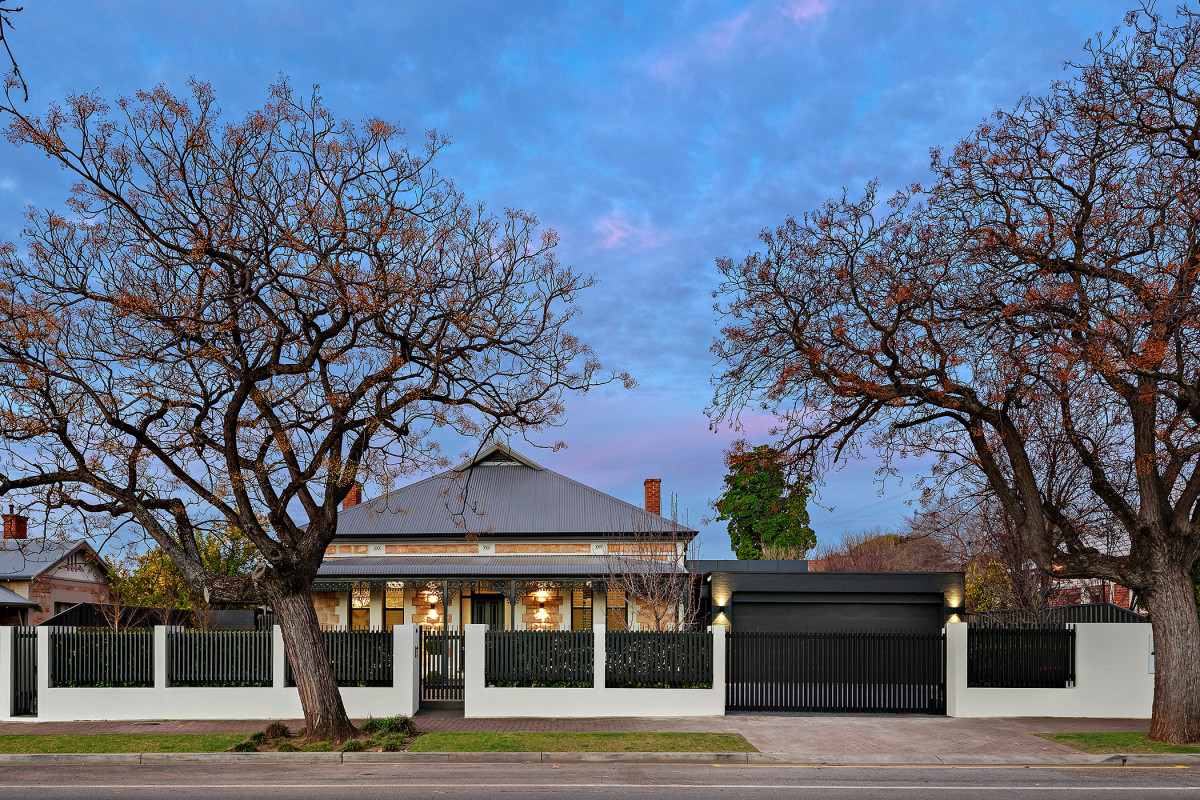 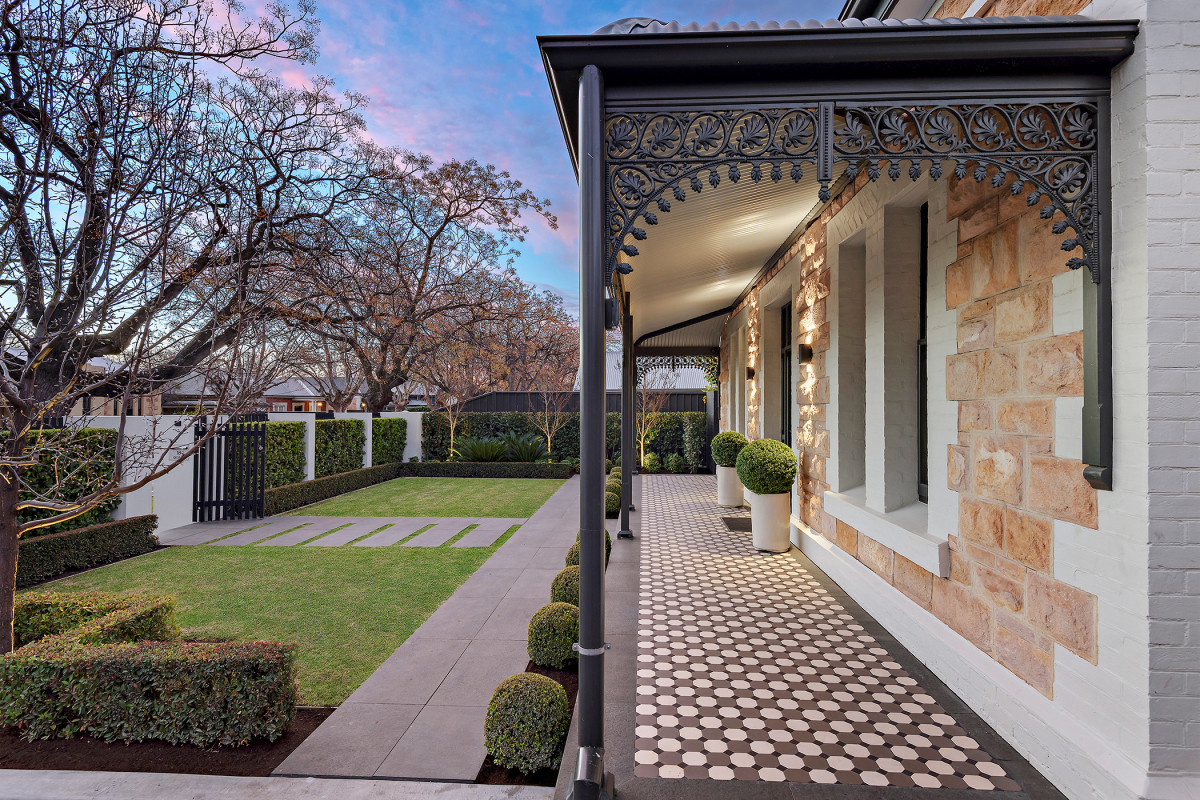 Frank is an exclusive agent for Porcelanosa Group — a large Spanish exporter of high-end building materials such as ceramic tiles, stone, tapware, and bathroom furniture. He is also part-owner of South Australian company Estilo Commercial.

Frank and Maria have renovated several homes previously, including beautiful properties on First and Second avenues in St Peter’s.

“Unfortunately, 18 George Street came on the market when we were just finishing our previous house at Second Avenue and we just weren’t in a position to buy it.”

By coincidence, the successful buyer was a family friend, who then engaged Proske Architects to begin drawing up a restoration and extension. 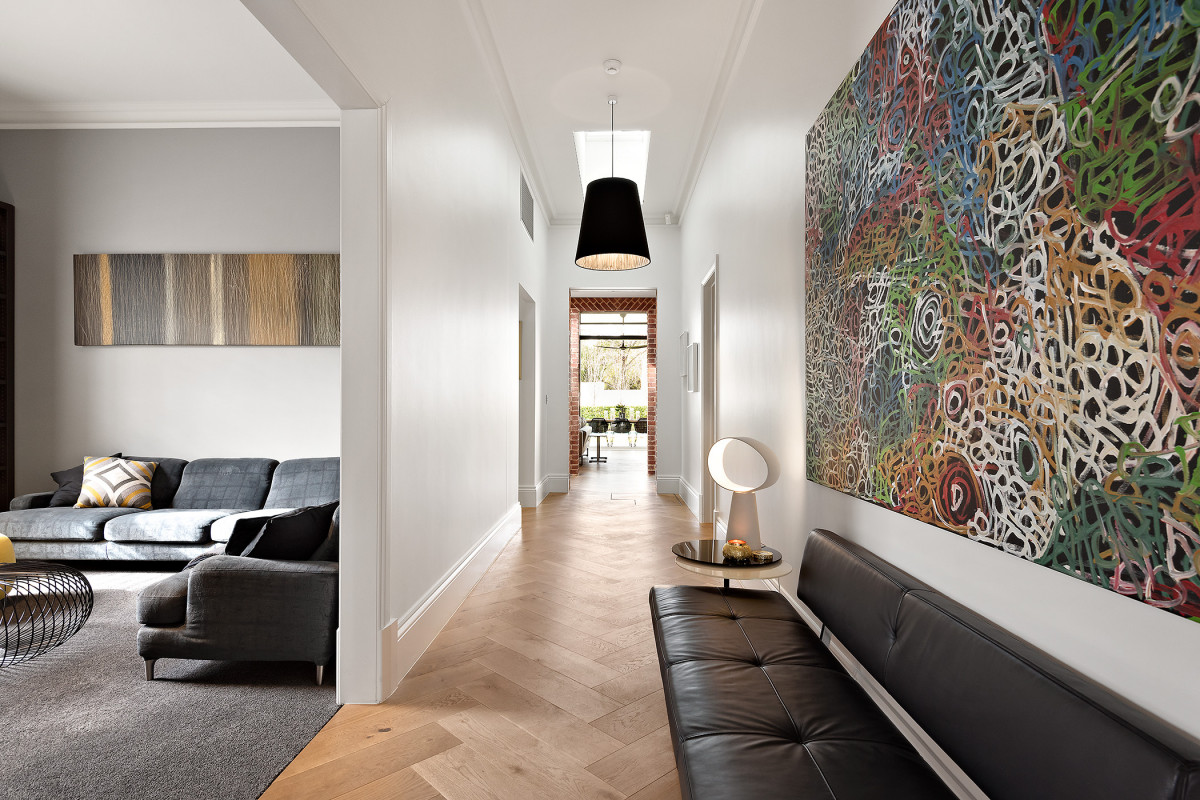 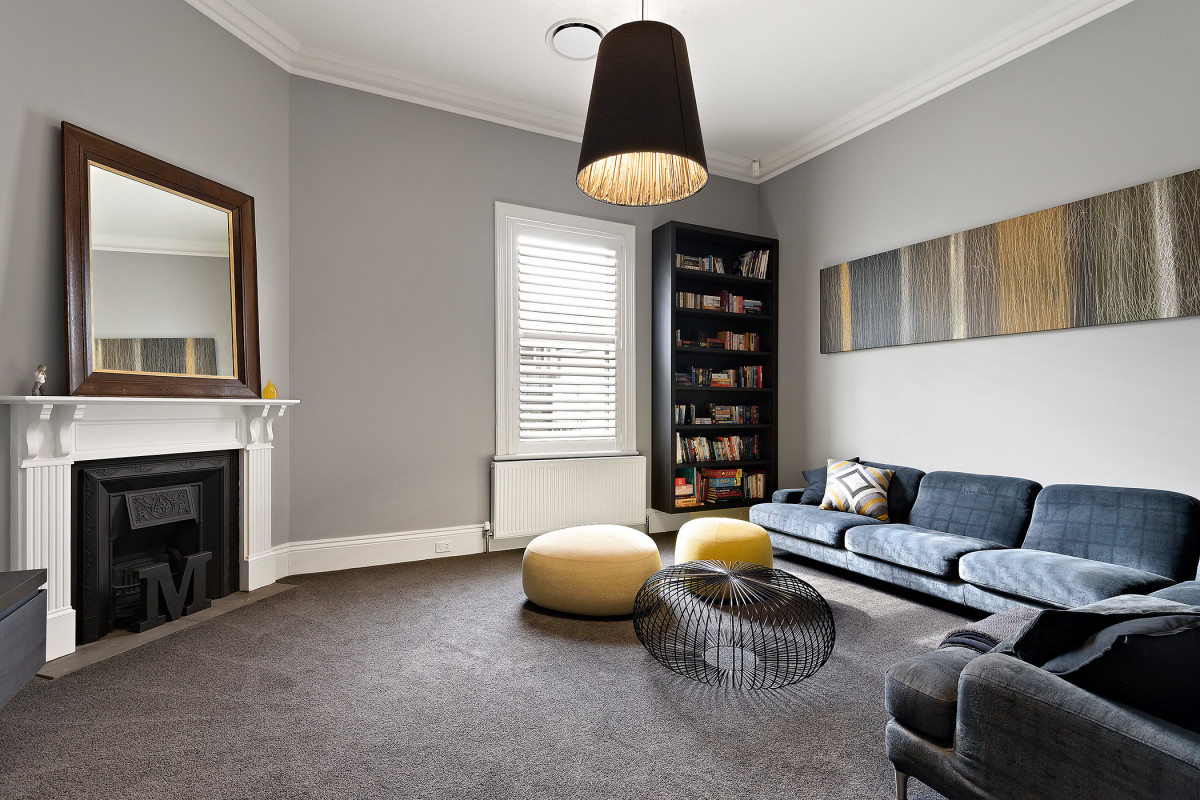 It was while the families were on holiday together, Frank said if they ever decided to sell it, he wanted first dibs.

“More than six months later he rang me and asked if I was serious about buying it. By then, our Second Avenue home was finished and so we agreed on a figure and I bought it off him,” Frank says.

Frank continued to work with Proske Architects, adjusting the design to suit his family. The project took about 18 months and was completed in April 2017.

The couple has listed the award-winning home for sale this week, having purchased land only a few hundred metres away to build a smaller home. 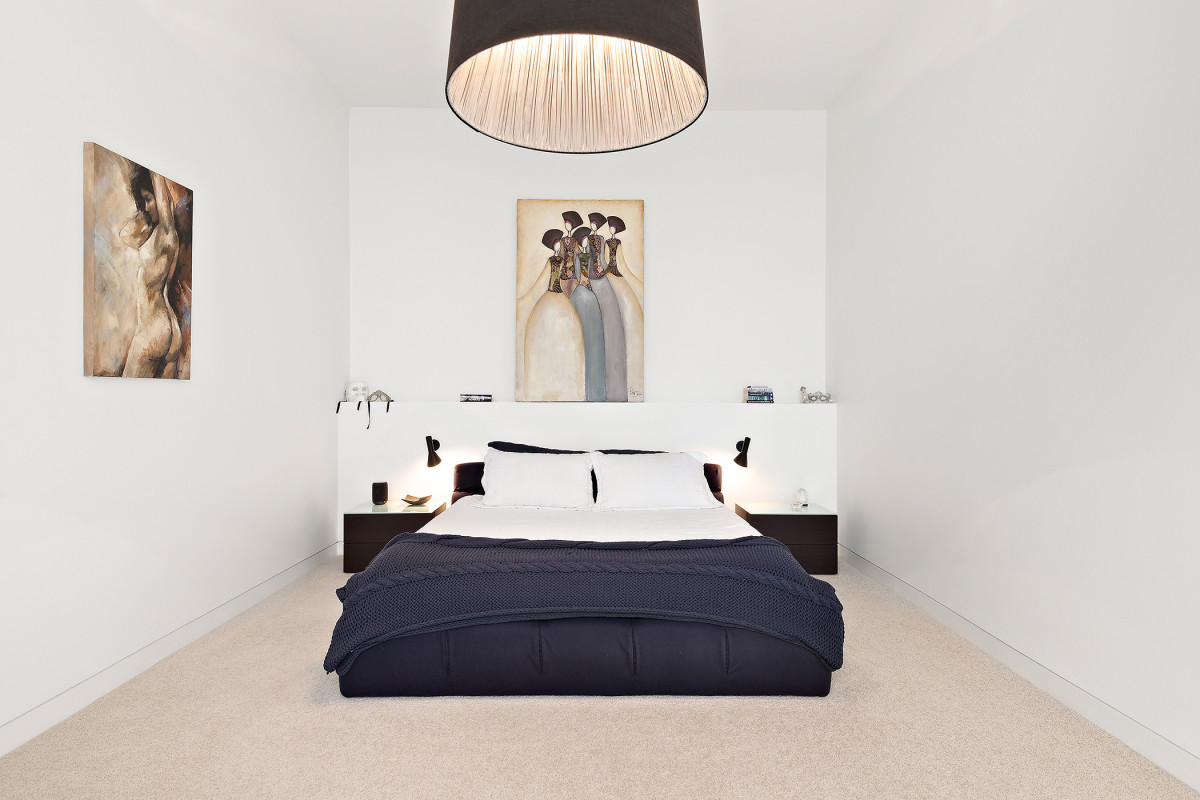 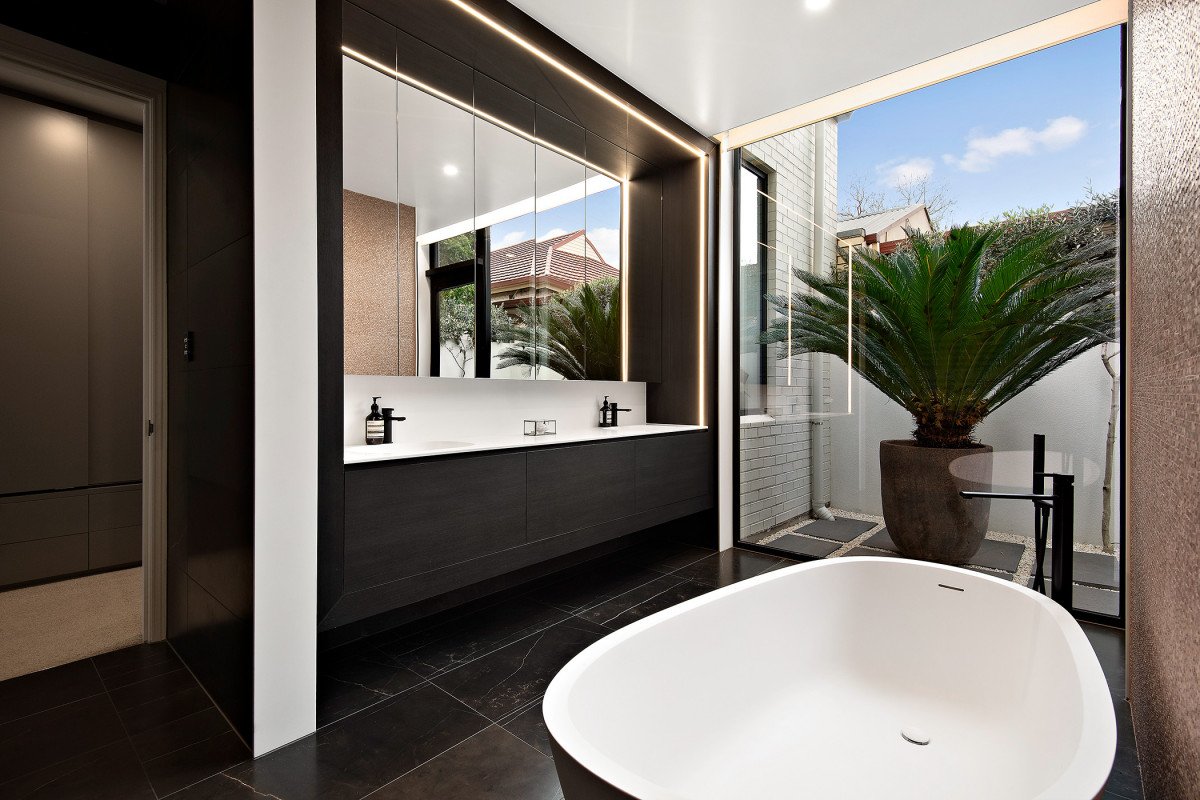 “We love the area and some vacant land came up, which is rare. We thought one last time we’ll do one more and it will probably be the home we’ll settle into,” Frank says.

“My wife and I enjoy the process; we don’t go into them thinking that we’re building them to sell. If an opportunity arises, as it has now, we take the opportunity.”

Their expansive luxury home at 18 George Street has a unique floorplan, which sees the original villa kept as a standalone structure, connected to the new extension by a glazed corridor flanked by garden courtyards.

What really sets the home apart from other villa renovations is that the original structure has not been distorted. Other builders might have knocked down exterior walls to stretch the villa into one large home. 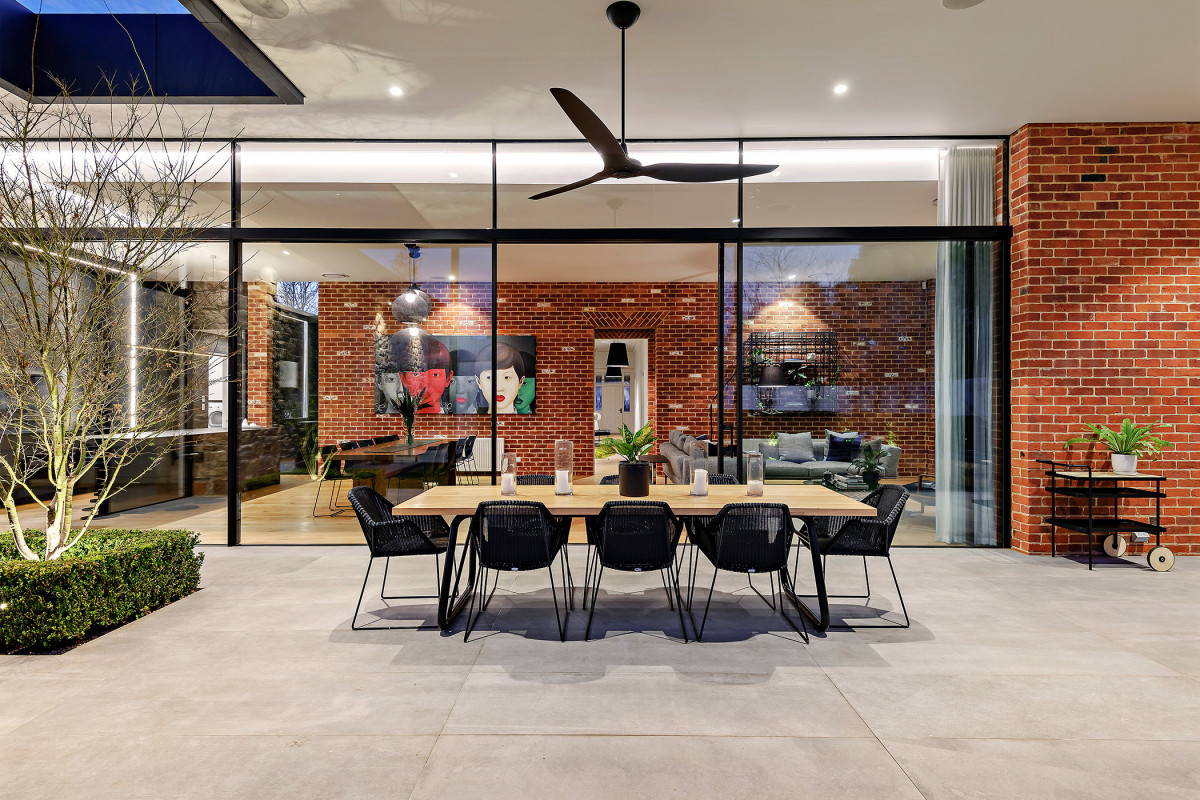 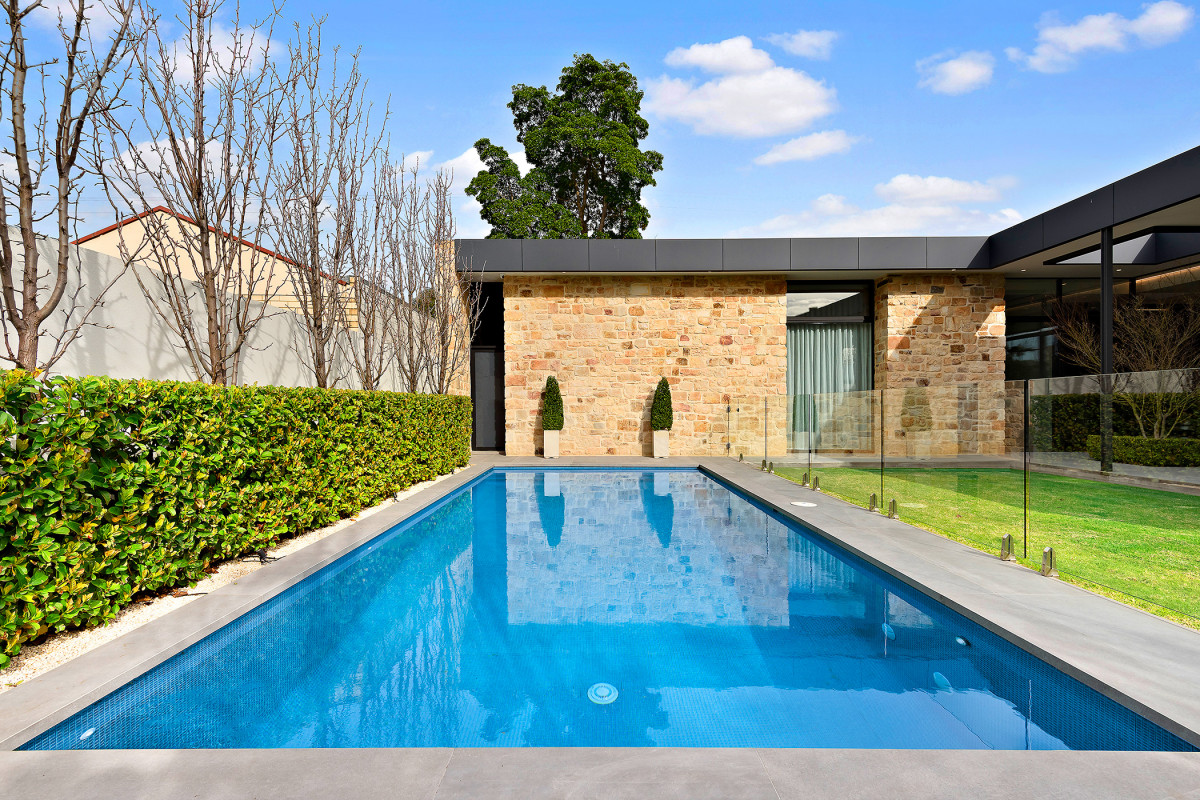 “Proske Architects created that glass link between the old and the new so not to distort the original stone villa,” Frank says.

“The council was very keen for us to leave the original structure as unchanged as possible from an external perspective, including the chimneys.”

When they bought the property of two titles, subdividing was a viable option. There was room to build a two-storey townhouse on the right, while still leaving enough space for a driveway to service the villa.

“There are not many blocks of over 1000 square metres in Norwood. People are generally dividing them and putting smaller houses on them. So, I think there’s a there’s a lack of decent-sized real estate in Norwood,” Frank says. 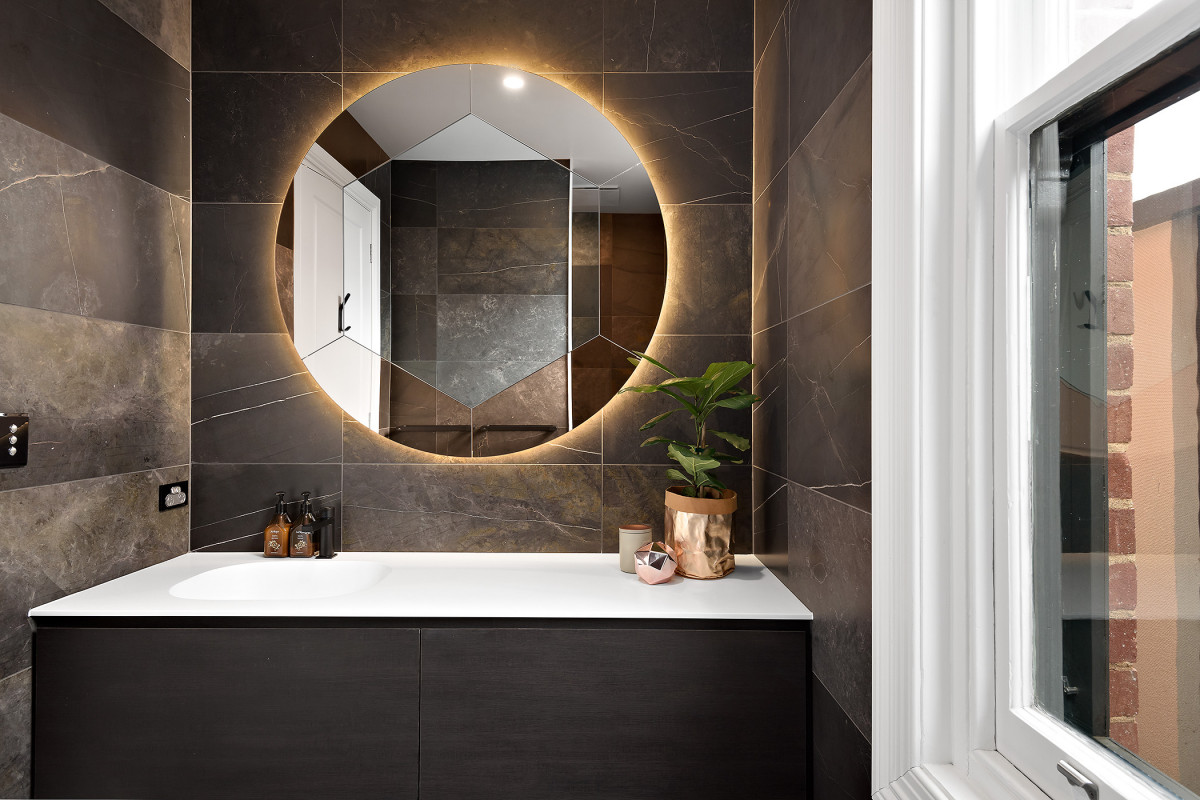 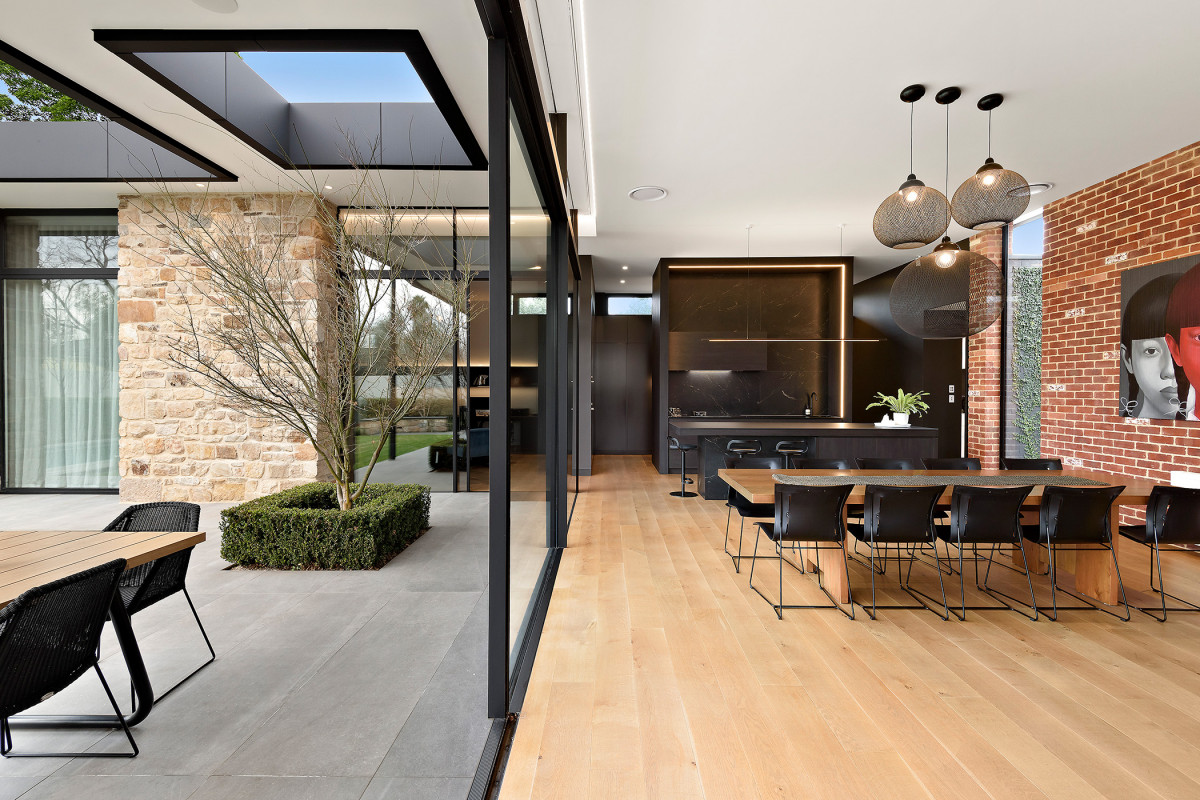 “You’re starting to now see some people really throwing some serious money into some big renos, but there’s not a lot of this size of property fully renovated in Norwood.”

Much of the materials throughout the home were sourced through the Porcelanosa Group in Spain.

“I’m normally in Europe three or four times a year at factories, trade fairs and product launches, but unfortunately I’m not able to get there at the moment,” Frank says. “Most of what’s in the home was picked from trade shows and factory showrooms.”

One of the couple’s favourite features is the European-inspired hydronic heating throughout the house. There is also the combustion heater and an Escea wood fire and barbecue in the entertainer’s terrace. 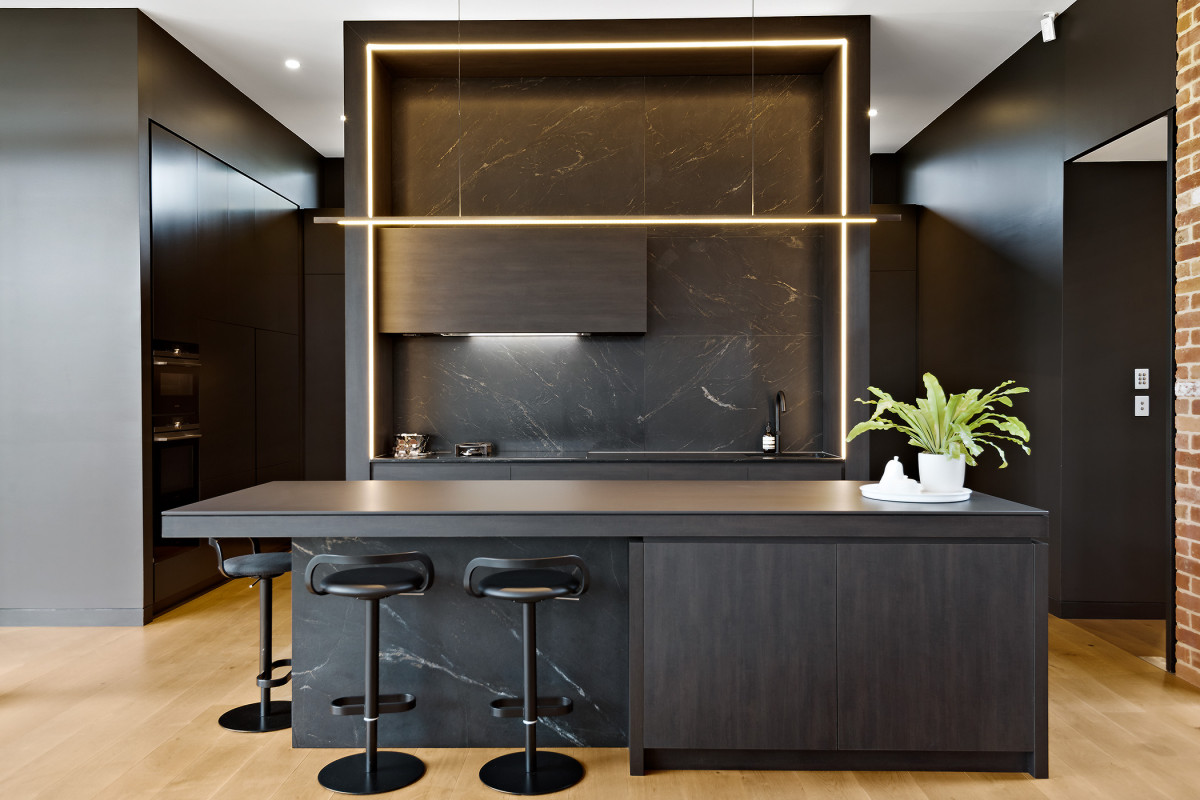 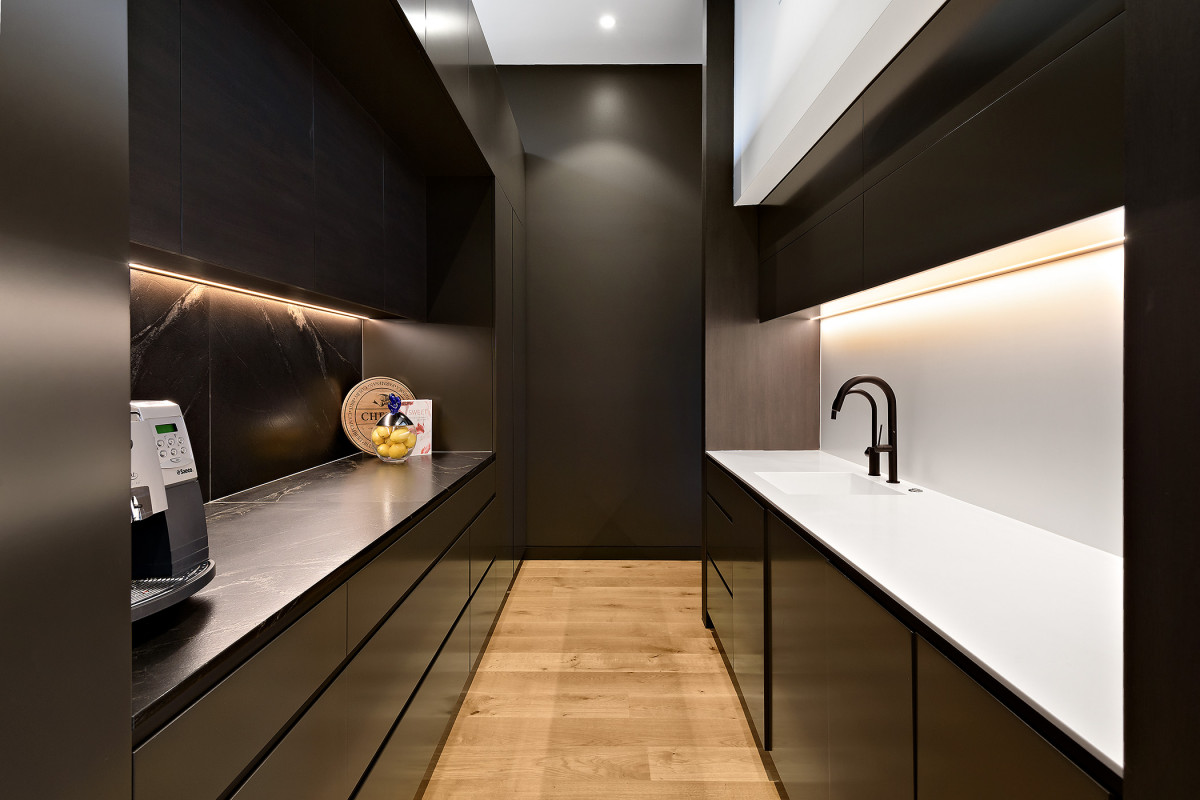 Materials and styling have a strong European flavour throughout, especially with the liberal use of glass, stone and timber.

“The Europeans have always made good use of natural materials to give a house that warm feel,” Frank says.

“I work with Europe most nights, so I generally have my laptop on my chair in front of the fire doing emails and telephone calls back and forth overseas. My favourite thing would be looking out over the back garden with the lights on, looking at that tree and the verandah area.”

An opening in the verandah allows the rain and sun upon a central tree, which breaks up the man-made materials and brings some atmosphere to the view afforded the living room. 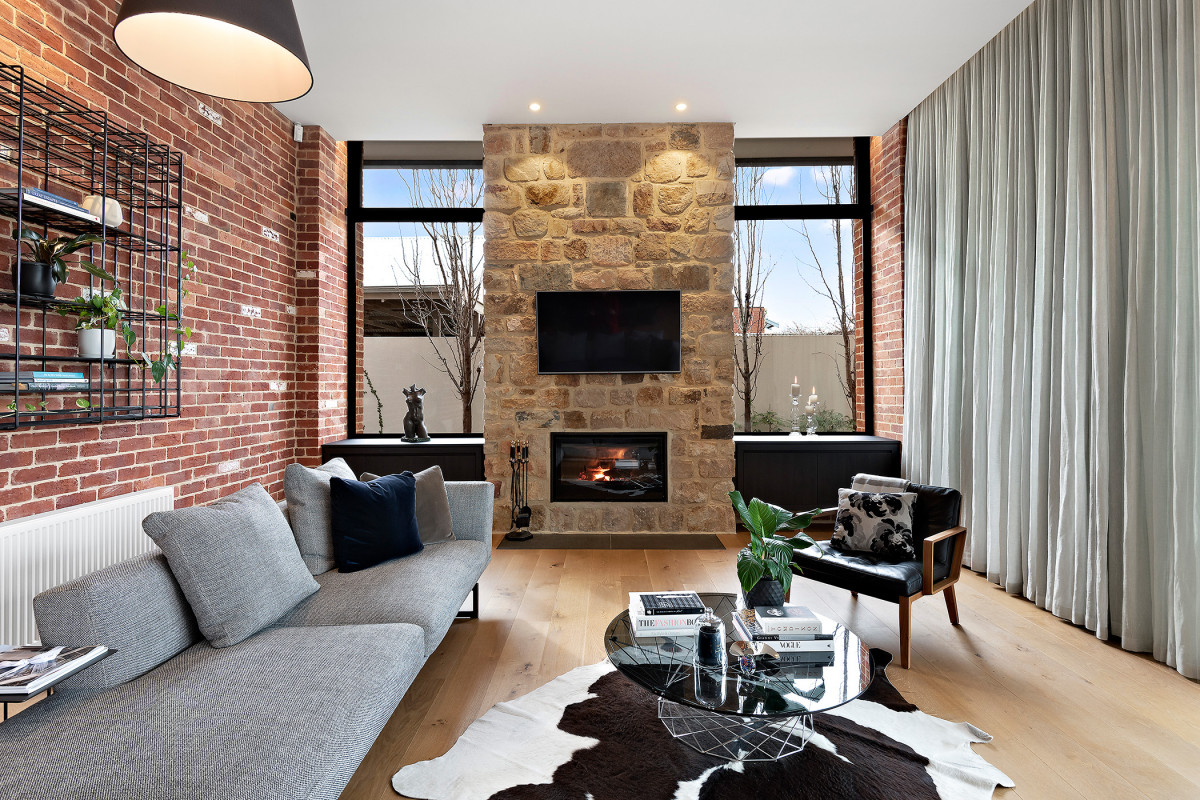 “We have lights that illuminate the tree and it gives the open living space an ambience that it wouldn’t otherwise have.”

The home boasts a long list of high-end features, including American Oak herringbone floorboards and New Zealand wool carpets. A parent’s wing is a luxury oasis with an indulgent en suite bathroom boasting double vanities, blade wall concealing a shower, and a deep soaking egg-shaped bath that sits beside a wall of glass featuring a private courtyard.

The opulent interior design scheme was created by Michelle Attard Design. There are oversized Rakumba pendant lights in the hallway, Mooi light fittings in the kitchen, plantation shutters in the bedrooms, and opulent bathrooms. 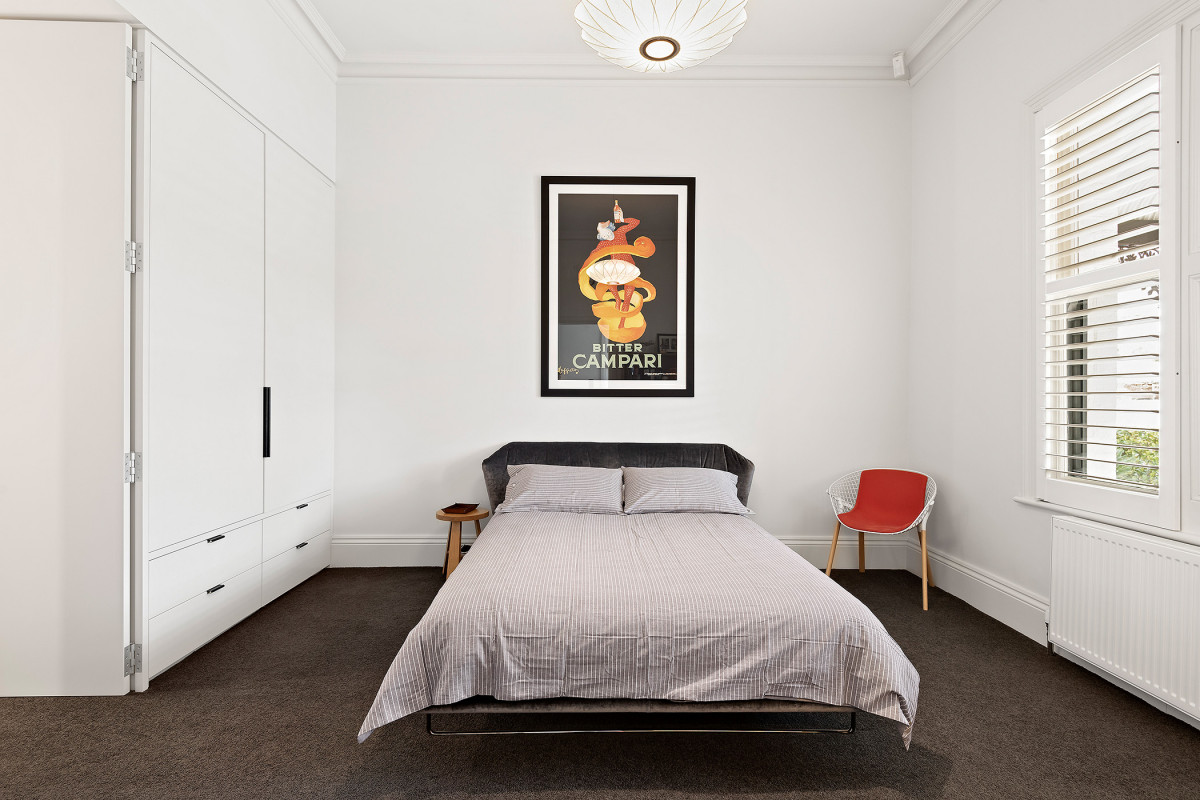 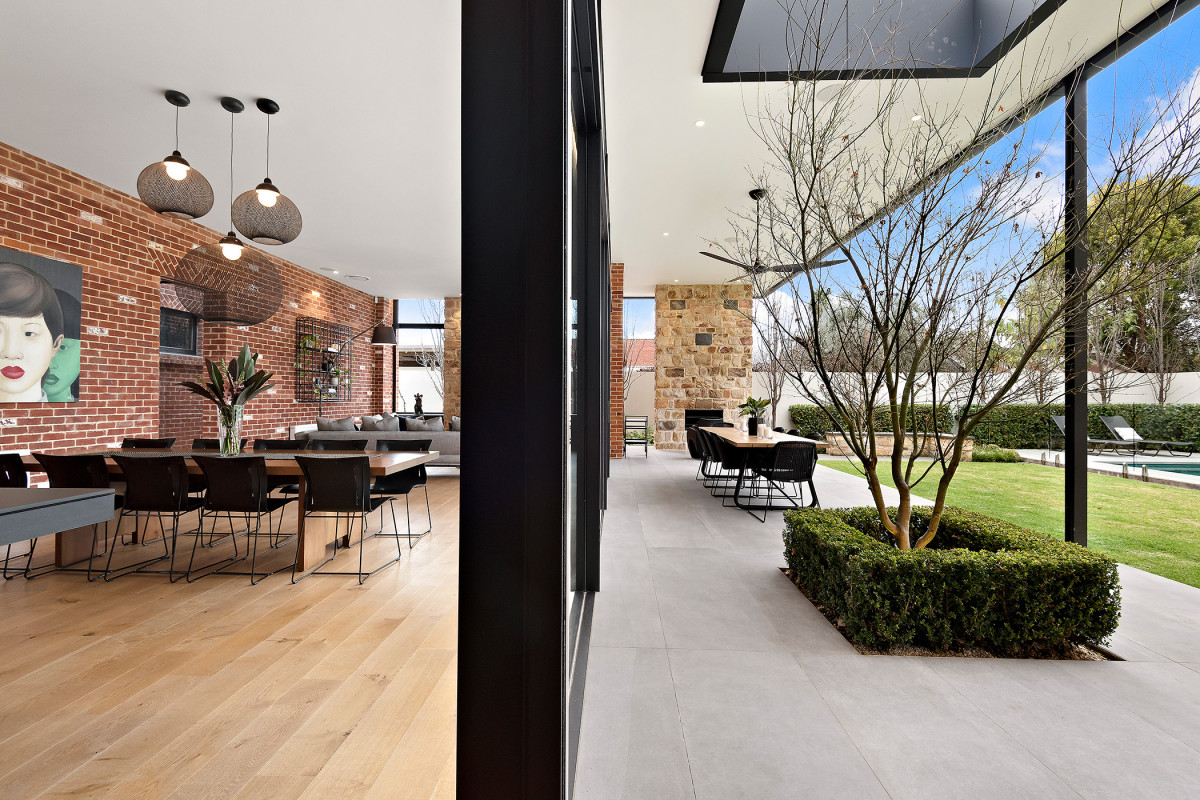 To match new sandstone walls to those of the original villa, stone was sourced from a large house at Blackwood that was being demolished. The stonemasonry proved to be one of the most significant expenses of the project and took about four months to complete.

“It’s a lovely home and a great home to live in. I think we’ll find the right buyer. Everything’s done, so with any sort of luck it will suit somebody that’s in the market for it.”

The sale is being handled by Sally Cameron of Toop & Toop Real Estate. 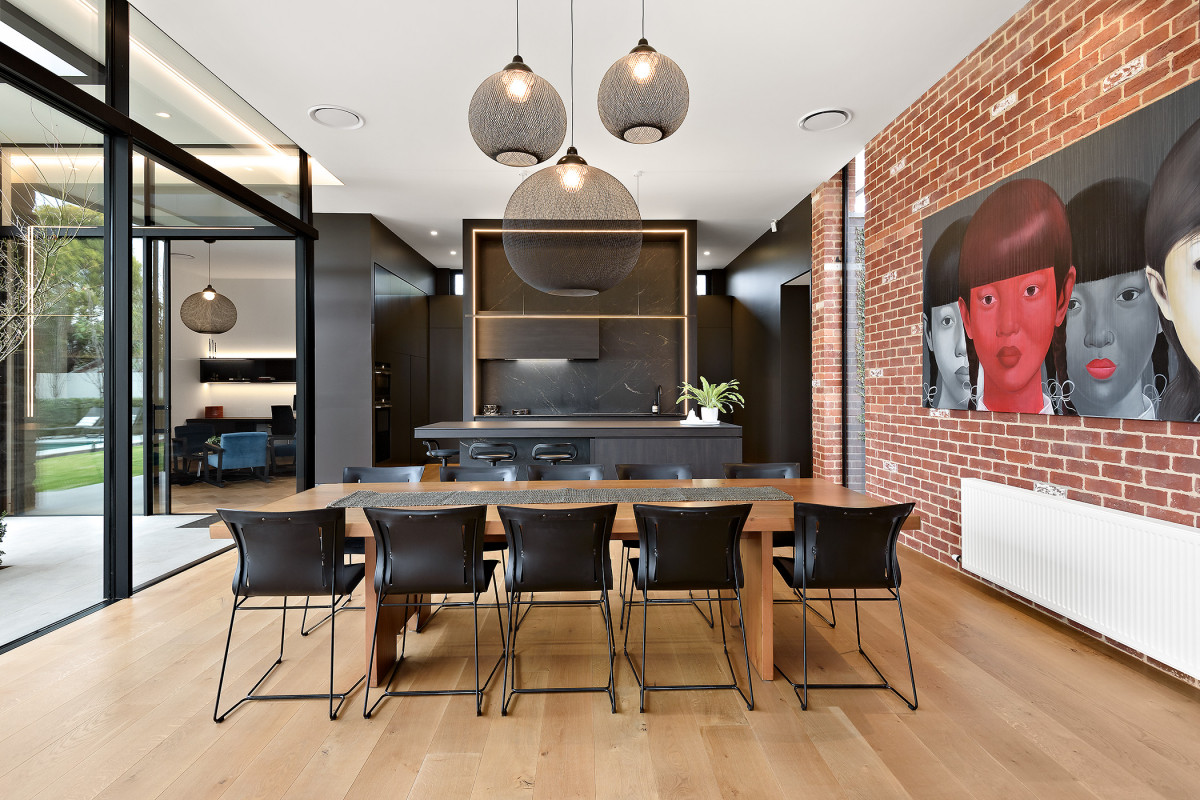 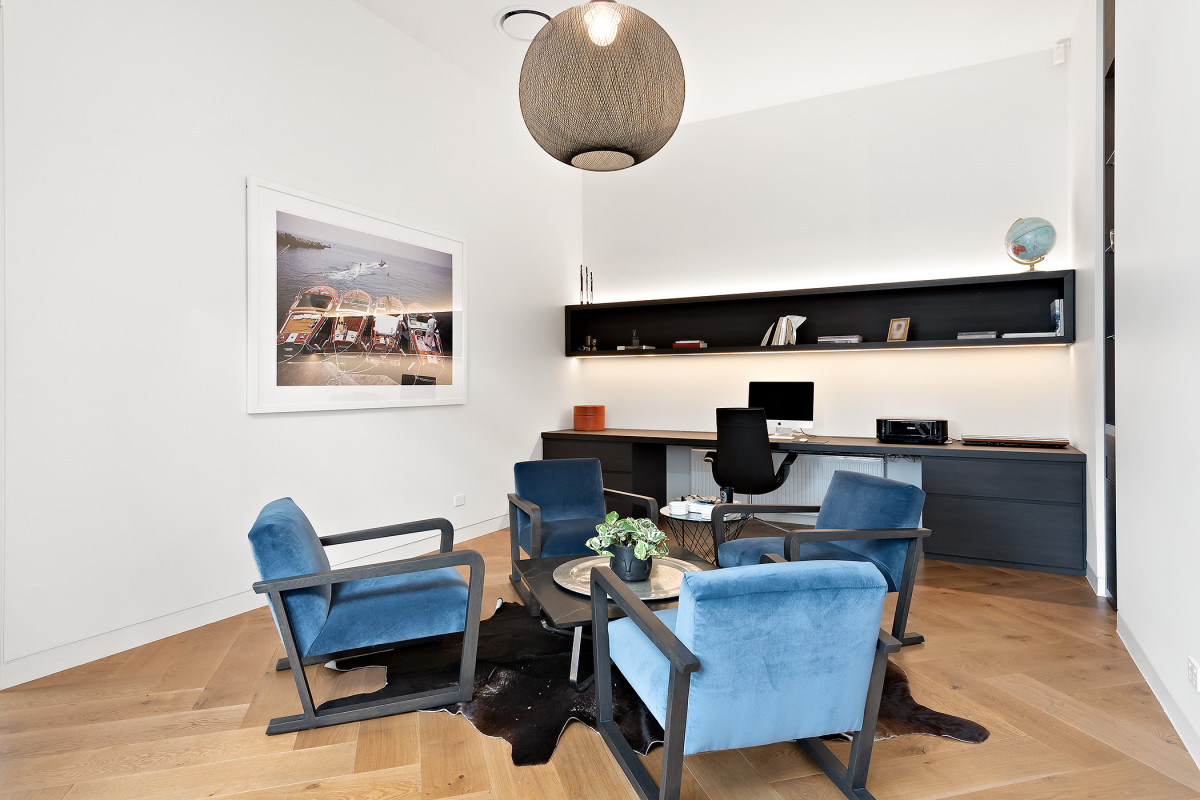 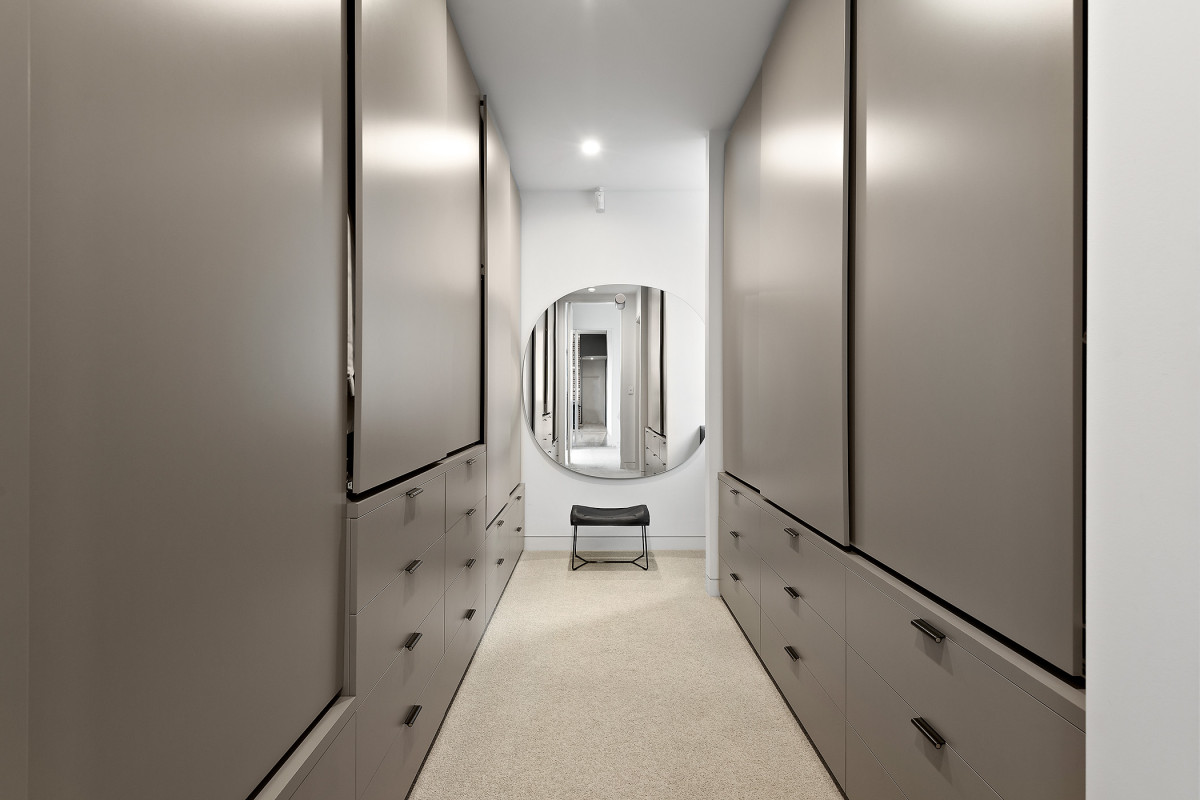