Designed by architect Max Pritchard and capitalising on spectacular views of Myponga’s hills and coastline, this award-winning rural property is expected to fetch around $1.5 million.

Anchored into the hillside at Wattle Flat on the western edge of the Fleurieu Peninsula, the home at 140 Myponga Beach Road is one of the most eye-catching properties you’re likely to come across.

Located an hour’s drive south of Adelaide, and 15 minutes from Yankalilla, the Wattle Flat property was designed by architect Max Pritchard and built by Hocking Constructions in 2013.

With its striking triangular roofline that reaches out to the horizon, the three-bedroom home won top awards from Master Builders SA and the Australian Institute of Architects.

The home is being sold by retiree Shirley Robertson, who first purchased the land in 2008 with her husband Arthur, who passed away last year. 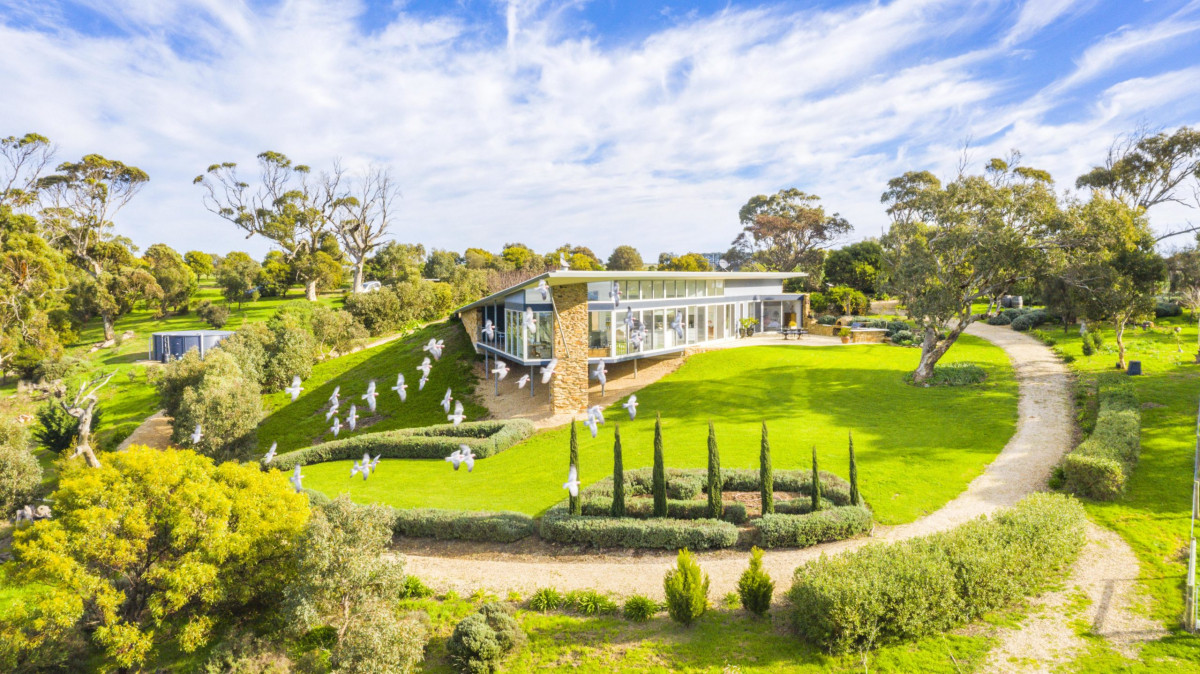 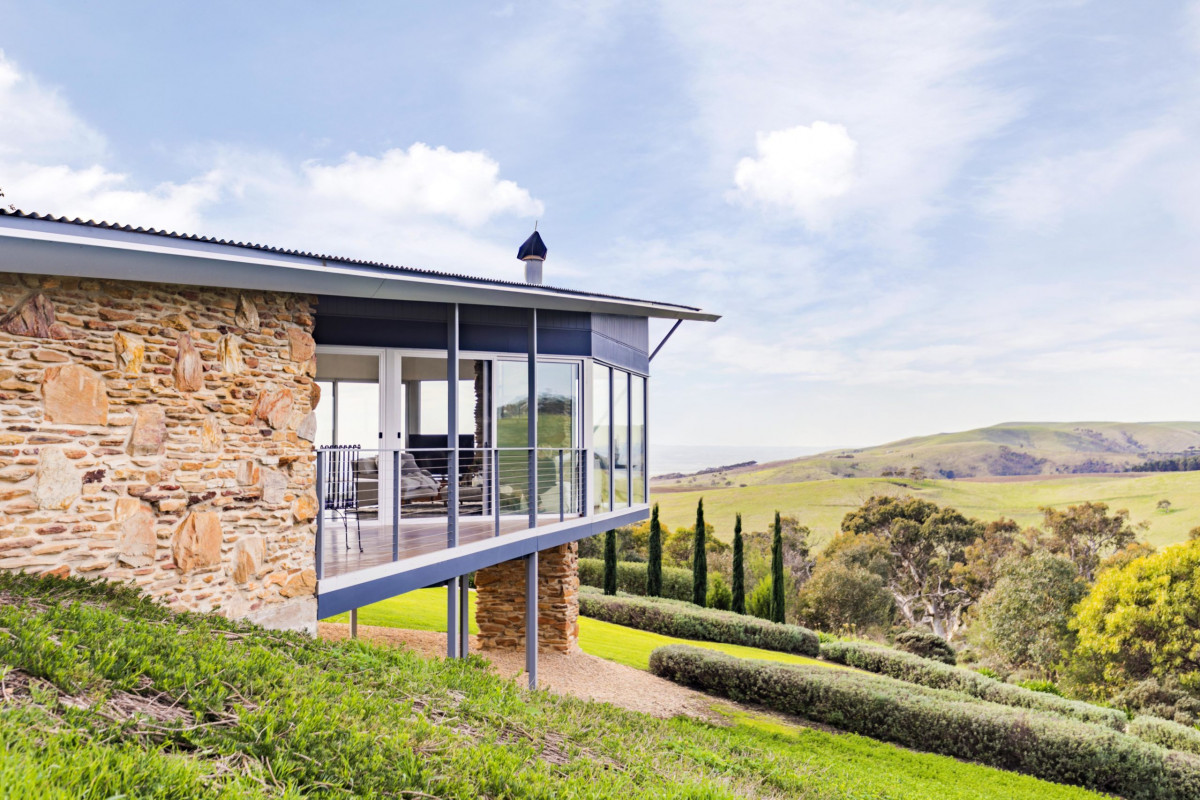 The couple of 41 years purchased the property with the vision of building a weekend retreat away from their home at Hyde Park. They loved the home so much they decided to move in permanently.

“We have the best of both worlds here with the hills and the sea,” Shirley says.

“It’s the sky that really makes it. Even when it’s foggy and misty you can see the trees through the fog. Mornings are beautiful here and I’m going to miss that when I move.”

Impressively, Shirley excavated all of the stone for the construction by hand and crowbar. The stone throughout the home and its external structures – such as the outdoor barbecue, pizza oven and woodshed – was all dug up on site. 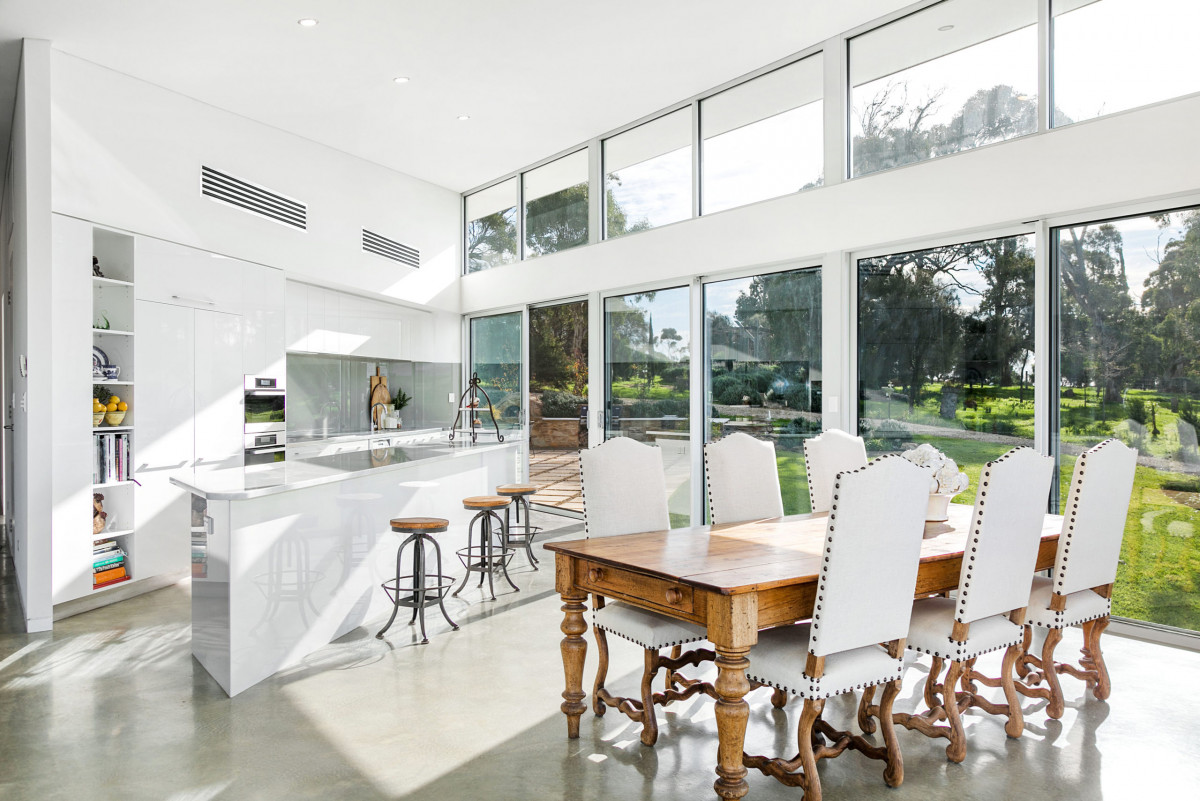 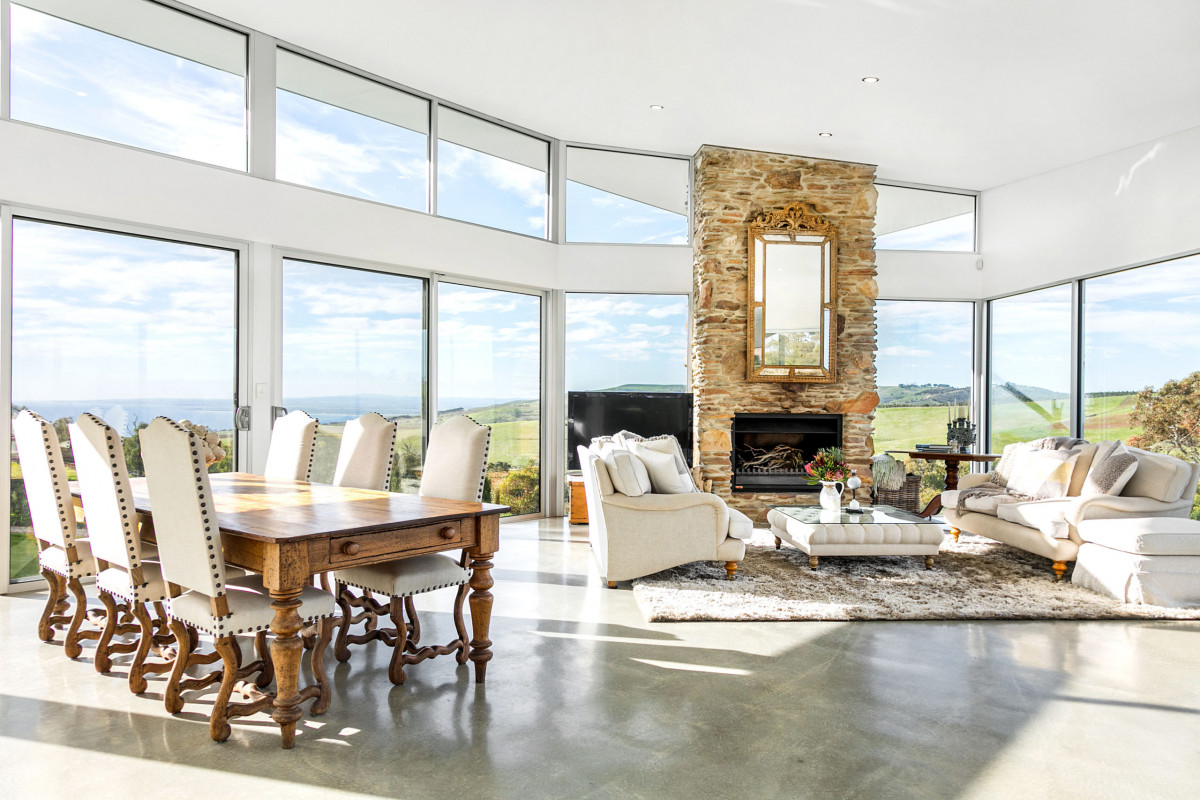 Shirley says fossicking for stones and boulders around the five-hectare property was a joy.

“Each weekend that we’d go down to the block, I would use a crowbar to get the big ones out and my husband collected them in the tractor,” she says. “It was a great job, a bit like mushrooming – it was exciting when we found one.

“We used to come down here and just camp in the shed, and then in 2013 we built the house,” she says.

The architect behind projects such as the Southern Ocean Lodge and Fino at Seppeltsfield, Max Pritchard visited to view the land and told the couple to trust him to pick the right spot to place the home.

“Working with Max was great,” says Shirley. “When he showed us the design, he said it was small but perfectly formed. It’s not a large house, but it’s an easy house to live in.” 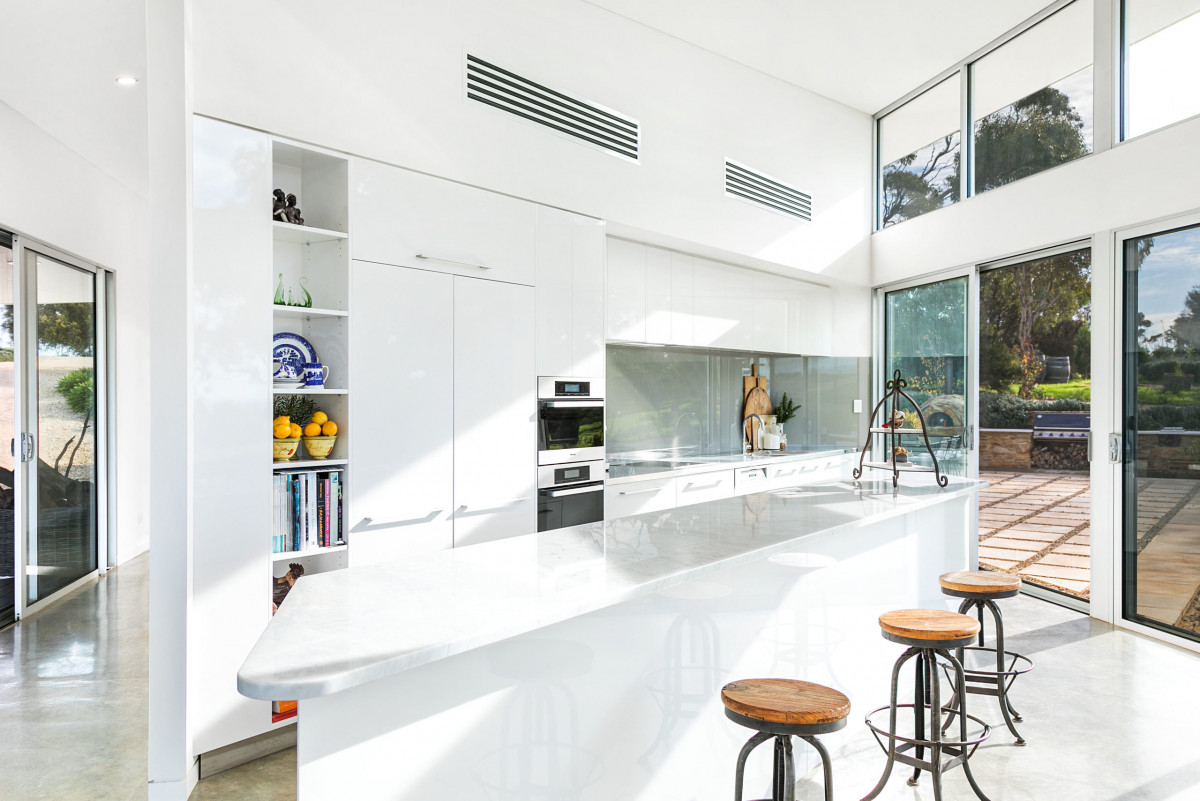 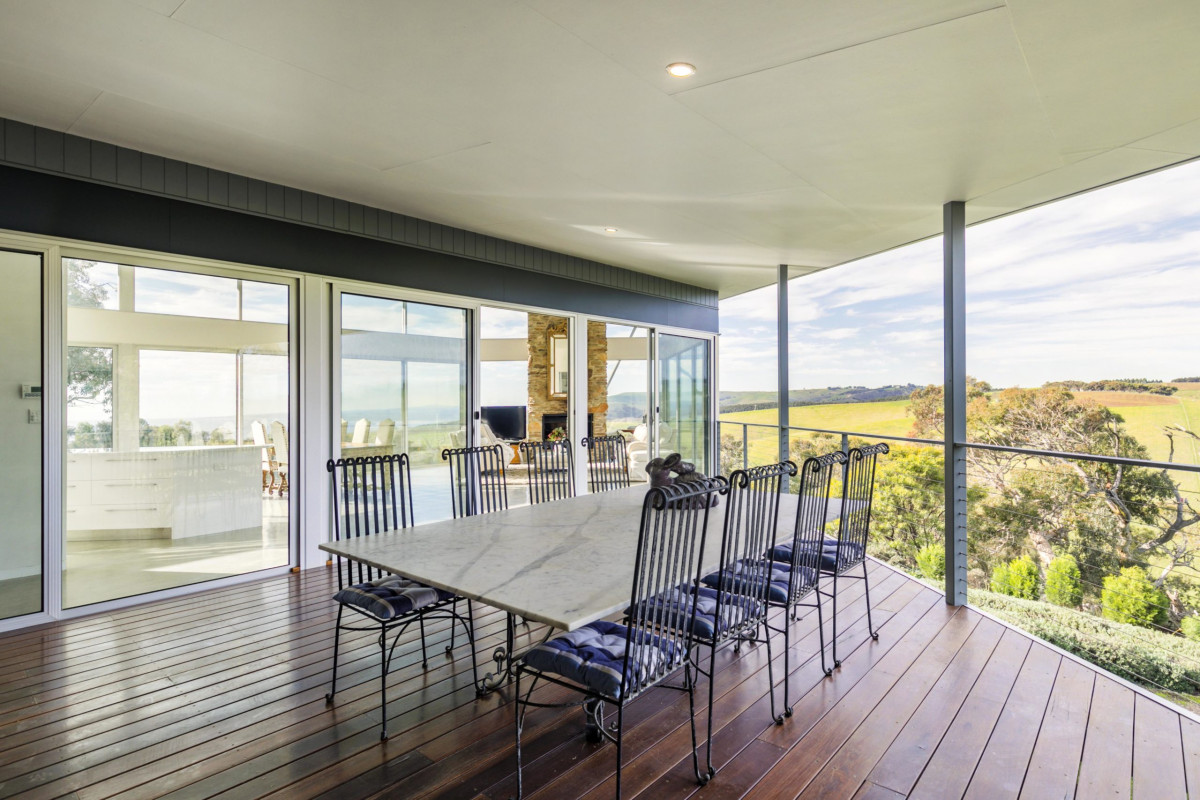 The project grew much larger than the couple initially envisaged and they were advised that they could scale back the design along the way. But they loved the concept and decided to press ahead.

“We didn’t change much, I just wanted a wider passageway and marble on the benchtop, rather than steel,” Shirley says.

The large central island bench with Carrara marble is the hero of the kitchen, with a second benchtop of stainless steel and Miele appliances.

A delicate structure supports the living room, jutting out from the hill with its soaring roofline. A panoramic expanse of north-facing double glazing is sheltered under the cantilevered eaves. 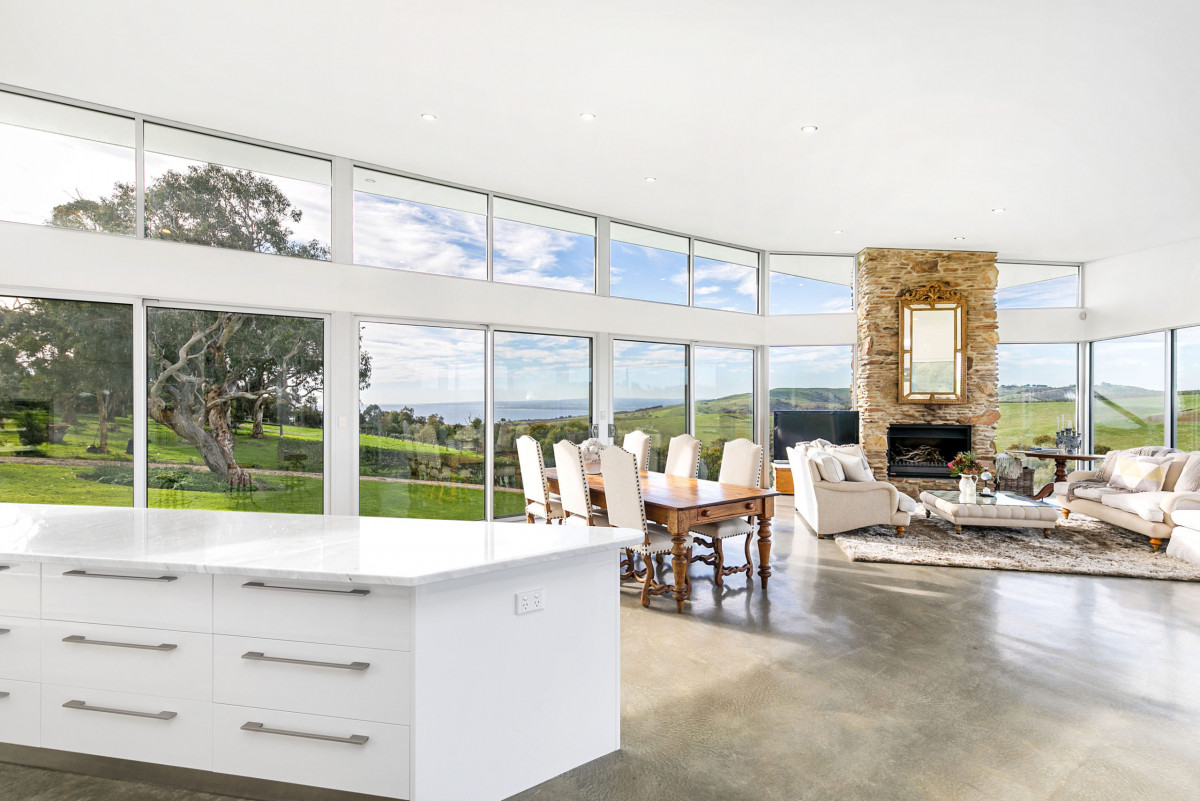 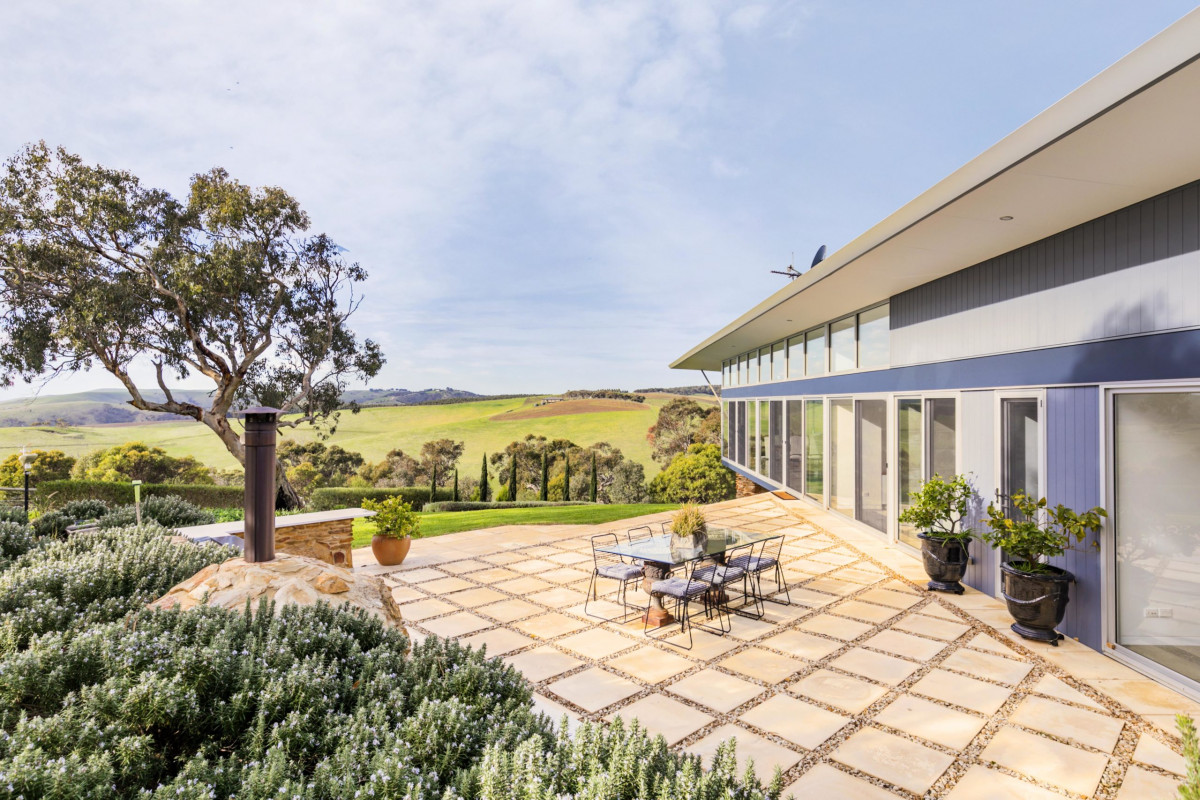 The three bedrooms are located on the northern side of the home, all enjoying stunning views. The main bedroom is serviced by a walk-in robe. From here, the rooms open out to the paved courtyard which has a built-in barbecue and pizza oven.

The sun warms the house in winter, with floor-to-ceiling windows allowing sunlight to enter the home where the polished concrete floors capture and lock in the warmth.

“It has ducted heating but I rarely use it. The home stays reasonably cool in summer; you just have to open the doors when you get the breeze and it cools down.”

Shirley says the location is very private, with the only other visible structure being her neighbour’s home – too far away to make out people, but close enough to see cars coming and going. 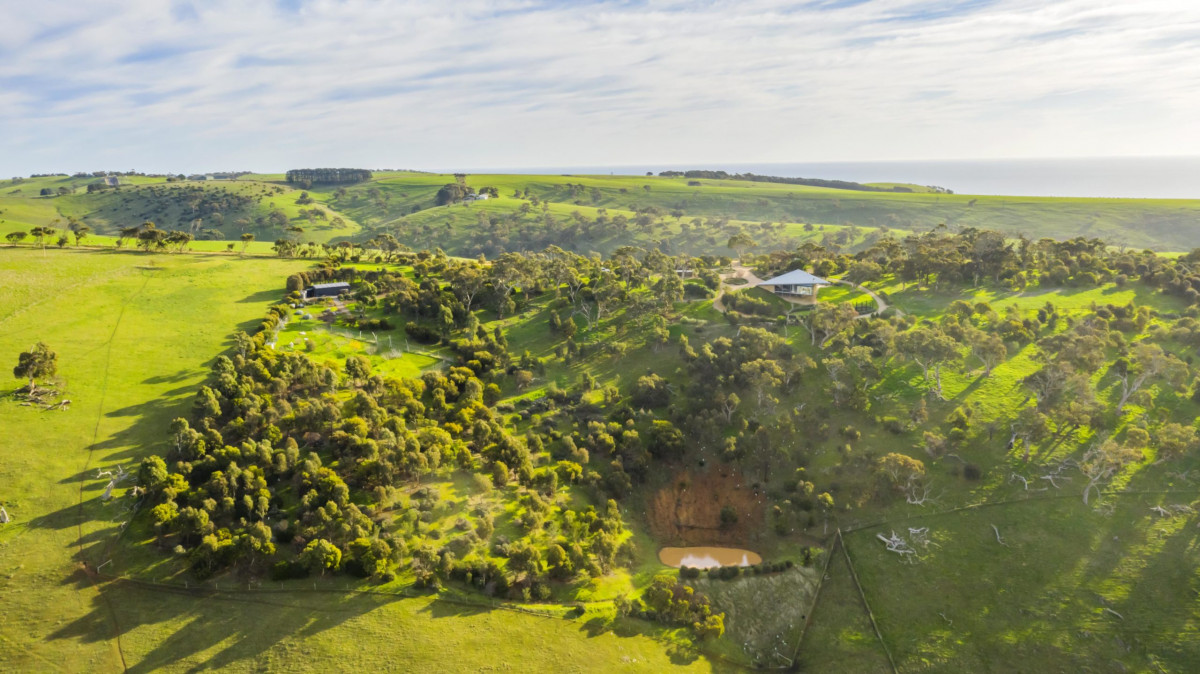 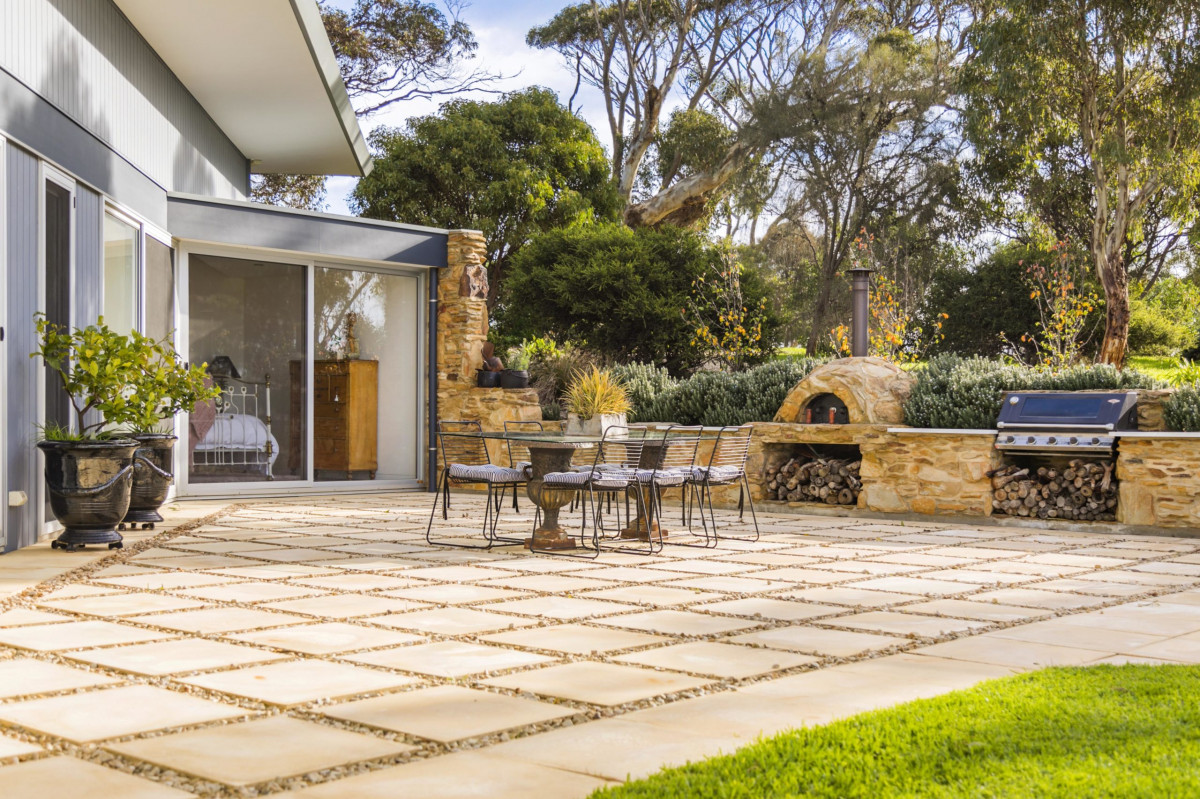 “I can see over the paddocks to their house, but that’s good because they can keep an eye on our house,” she says.

The large double carport provides direct access to the residence and is encapsulated under the main roofline, while the layout provides entertaining space on both sides of the home for all seasons.

The entire block has been re-vegetated and landscaped over the years. Circular sweeping gravel driveways flow around plantings of irises, bulbs and trees, with a mix of formal and wild gardens planted out with rosemary, irises, violets and lavender.

Wild field mushrooms are a bonus and thrive particularly well at this time of year.

There is also an orchard, which Shirley says contains most types of fruit trees you can think of. “We used to keep chickens in the orchard and they would sit in the trees,” she says. 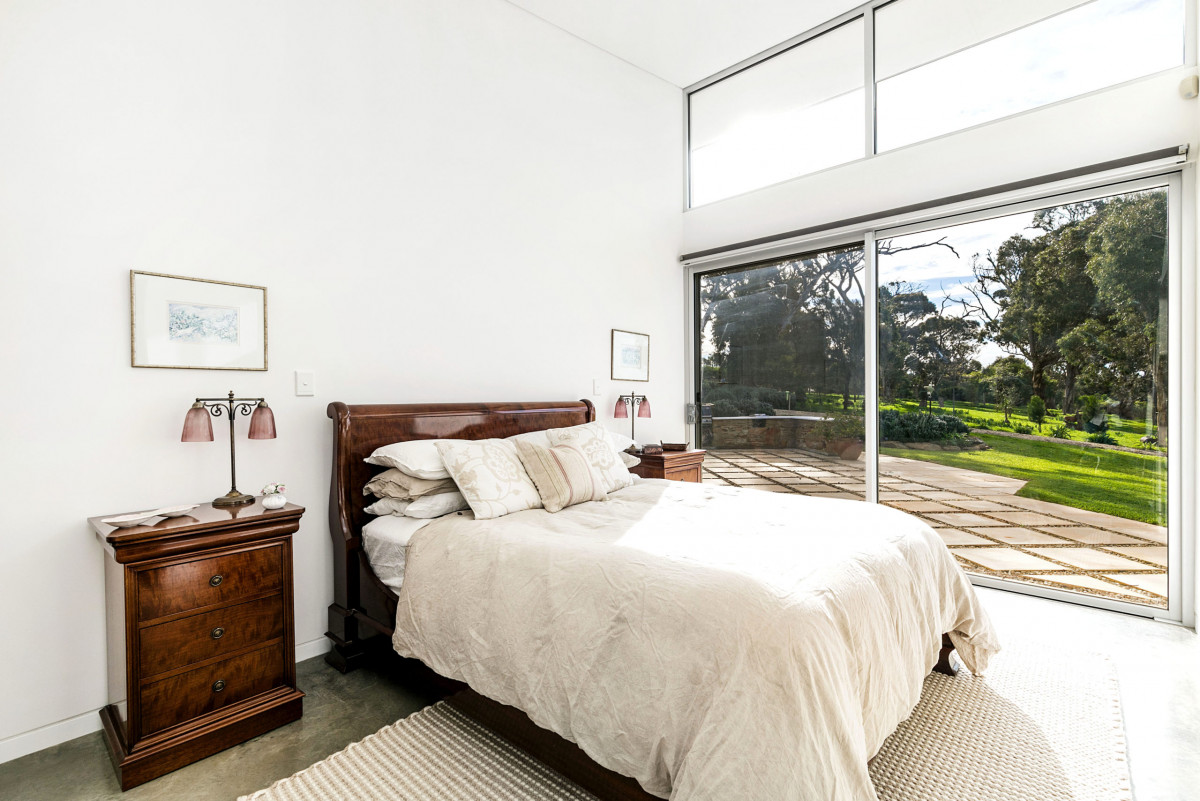 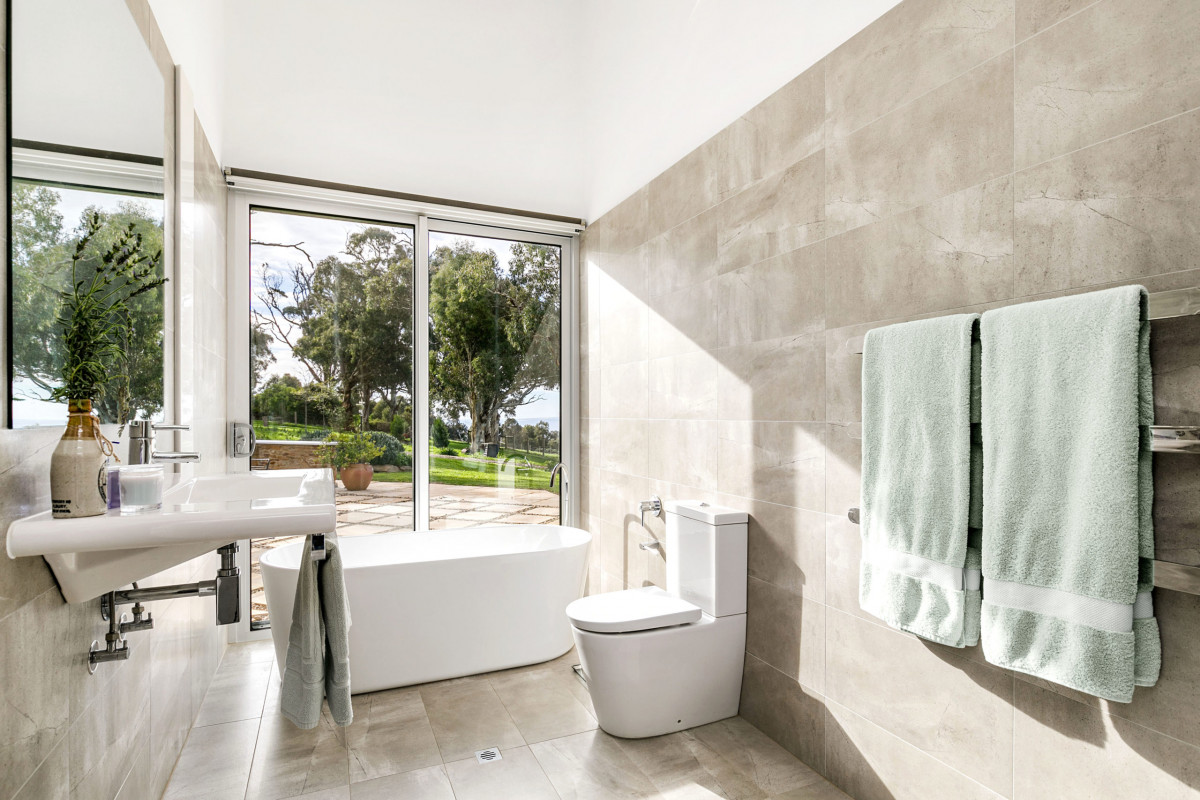 A garden pergola is made of timber from an old pier, illuminated by string lighting and framing a garden bench that creates a picturesque setting in the evenings.

The property has a fenced paddock, which would be ideal for alpacas or other animals, and is located adjacent to the family room.

Belonging to a neighbour, nearby resident Boris the bull once paid Shirley a visit and ended up staying in the paddock for a couple of months.

“Boris was gorgeous, he would come when you called him and played in the dirt. I hated it when he had to go,” Shirley says.

It’s also a great property for dog-owners, with Shirley’s standard poodle Jack enjoying free rein of the house and block.

“I love waking up in the mornings and looking over to Sellicks where you can see the different colours in the sky. It’s just beautiful.”

The sale is being handled by David Cocks of Harris Real Estate. 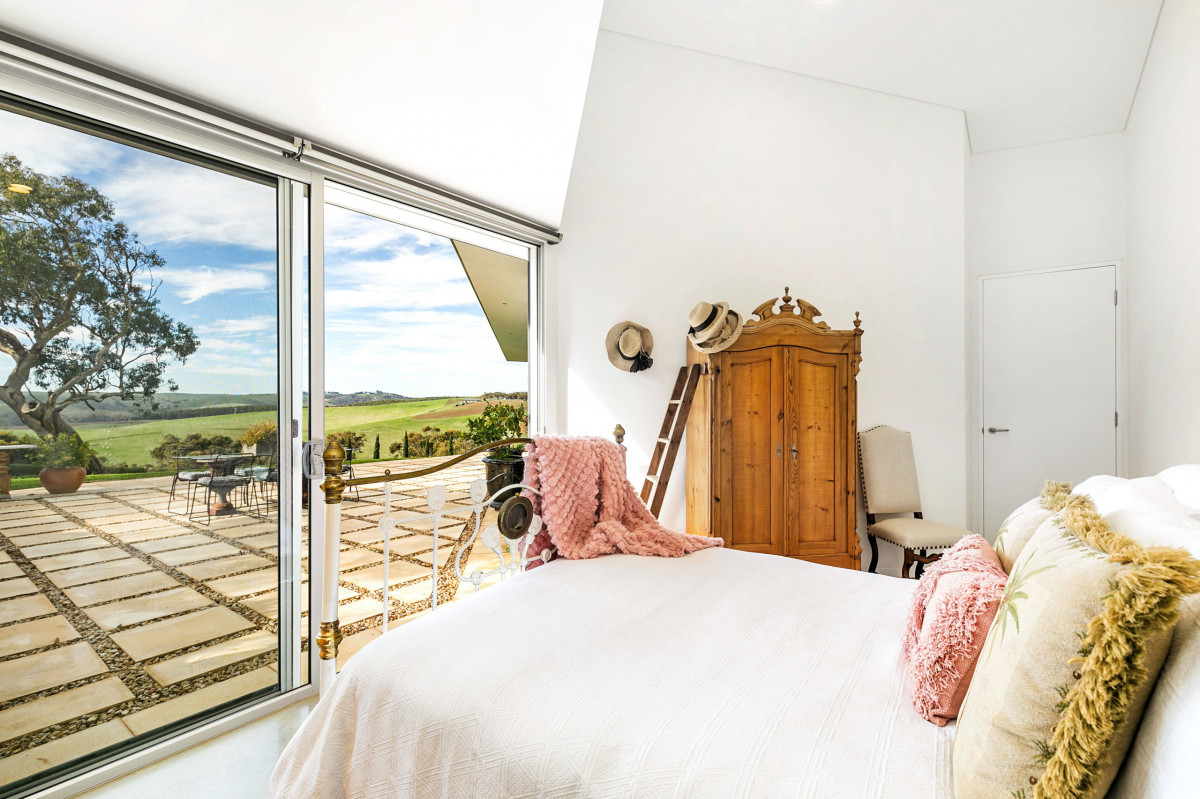 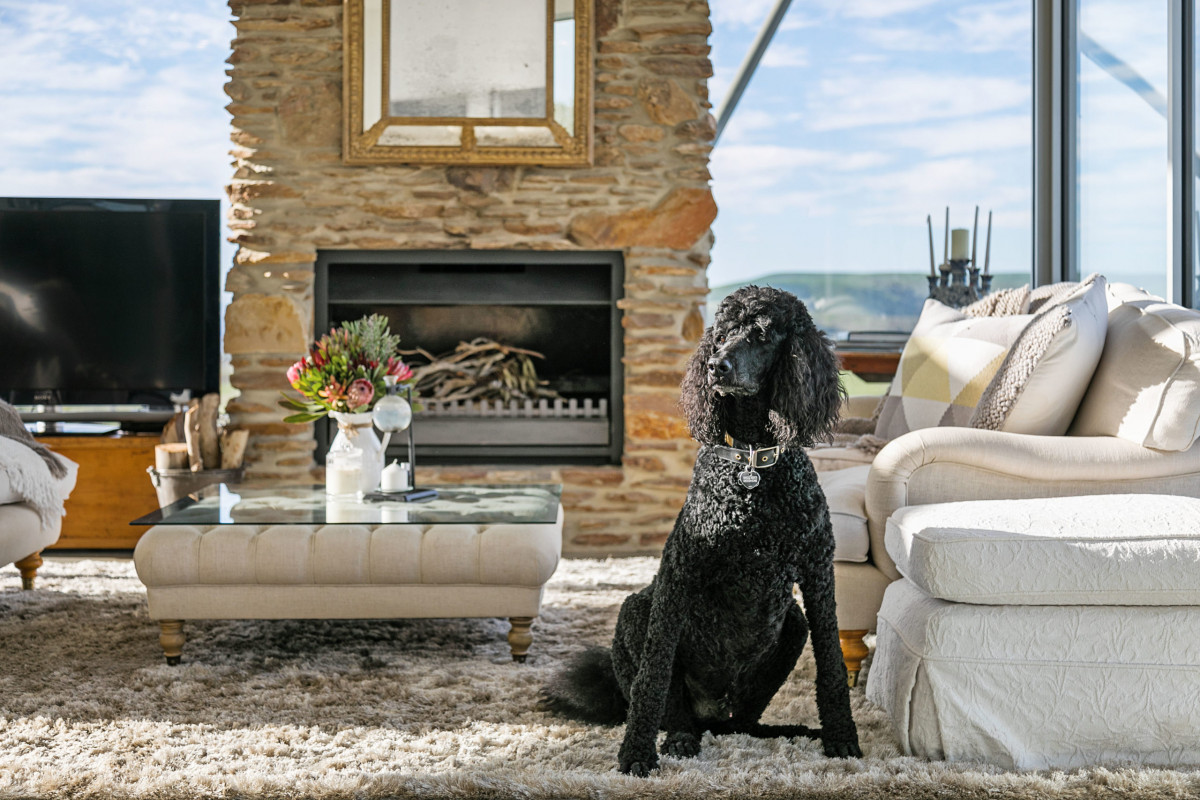 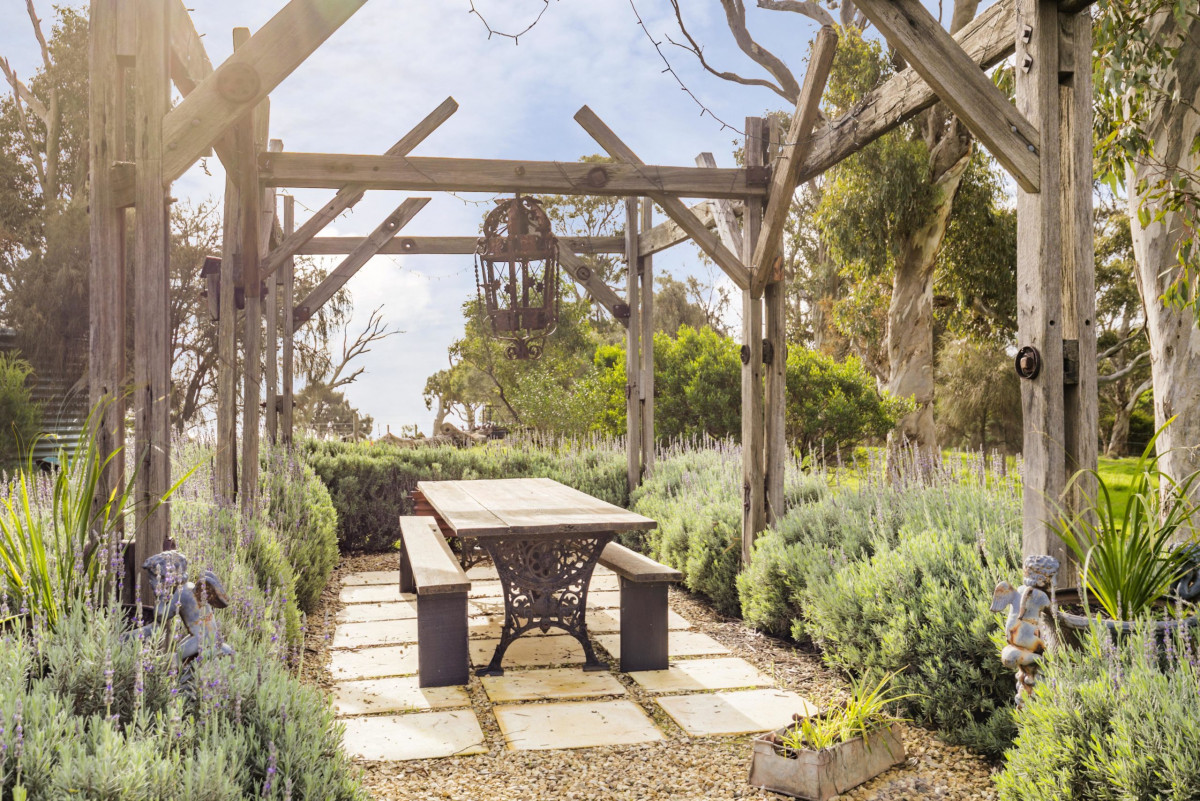 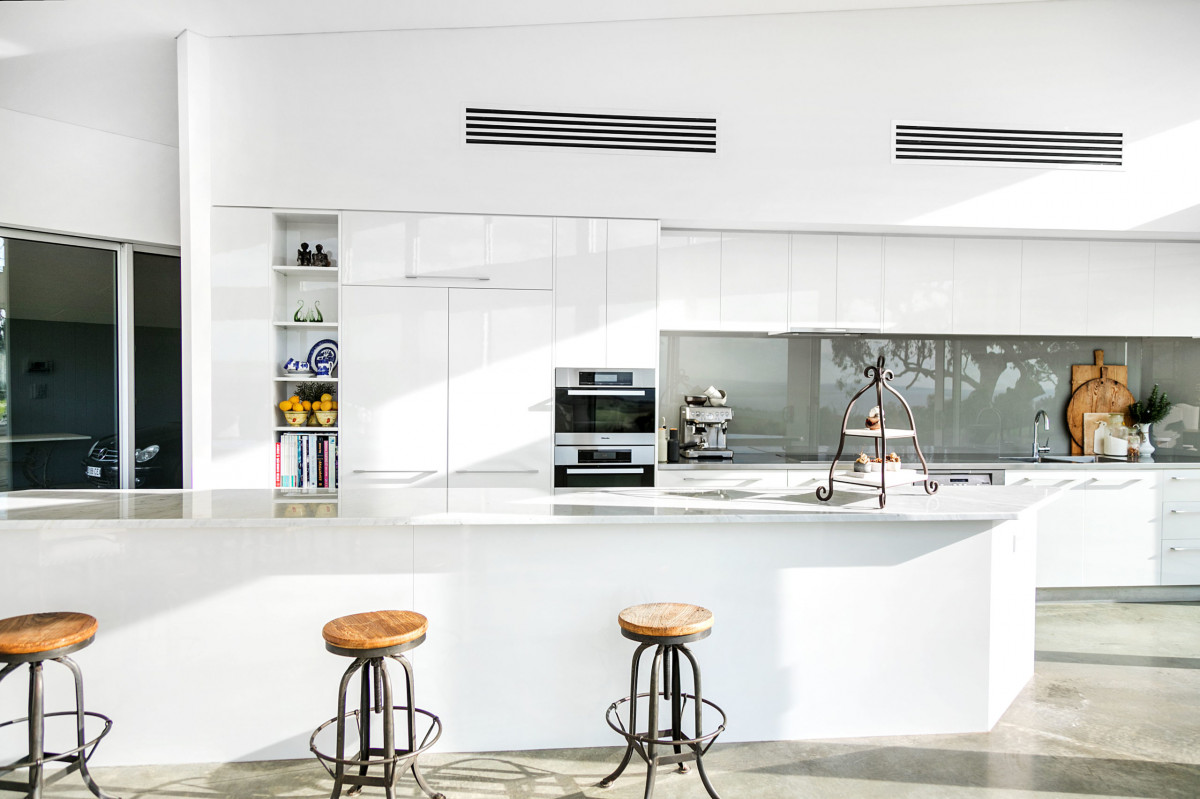