Margaret and Professor Christopher Burrell are selling their stunningly modernised 1880s family villa, which they have called home for 41 years and used to host numerous gatherings for the Coriole Music Festival, Adelaide Festival, and Open Gardens SA.

Retired psychotherapist Margaret Burrell and husband Christopher, an emeritus professor of virology from the University of Adelaide, are selling their rambling return-verandah bluestone villa, which they have called home for the past 41 years.

Listed with a price guide of $2.3 to $2.5 million, the five-bedroom property is situated on 1100 square metres across two titles on a corner block. It also boasts a large frontage at its address of 30 Rochester Street.

The couple is selling the property with the aim to eventually spend more time in Melbourne to be nearer their two sons and grandchildren. While Christopher is retired from clinical work at 78, the virology expert has been recently called upon for his expertise during the COVID-19 pandemic.

“We were a young couple when we bought the home in 1979,” Margaret says. “We’d just come back from eight years of living in Edinburgh with our two-year-old son, and I was seven months pregnant.” 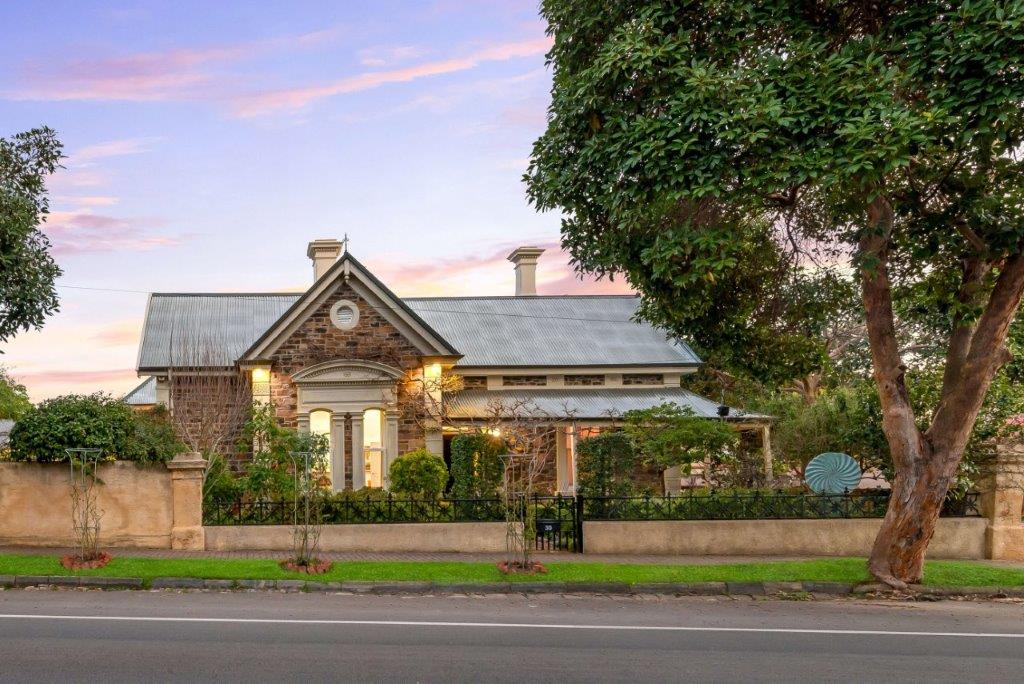 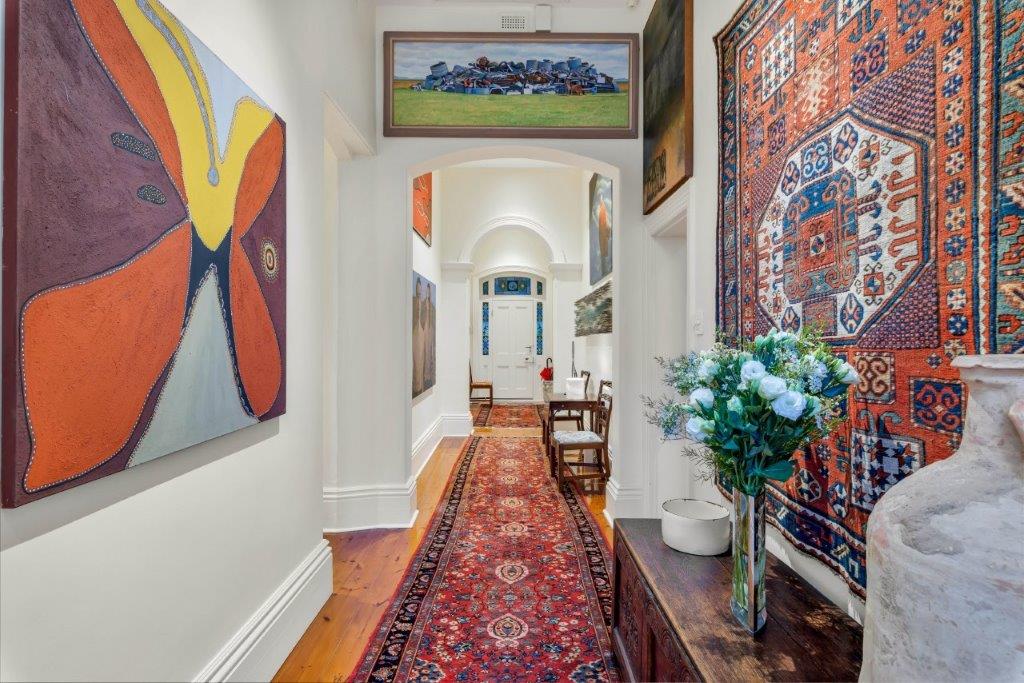 “Victorian houses don’t often appeal to me, but this one had very nice lines and proportions, lovely old fireplaces, and it had been modernised to some extent, although we’ve since modernised it far more.”

Margaret and Christopher purchased the home from Daniel Hains and Trudy-Anne Brown of local gallery BMG Art, through which Margaret has sourced much of the Australian art that currently adorns the walls.

“Christopher and I both come from New South Wales originally but we’ve become completely embroiled in South Australia through music, the arts, the Festival, the boys’ school, and university,” Margaret says.

With its gardens and decked pavilion, the home has hosted private gatherings for the Adelaide Festival’s program and donor events, Coriole Music Festival, and the Open Gardens SA Scheme. Christopher co-founded the Coriole Music Festival with Mark Lloyd from Coriole and was the music director for 16 years. 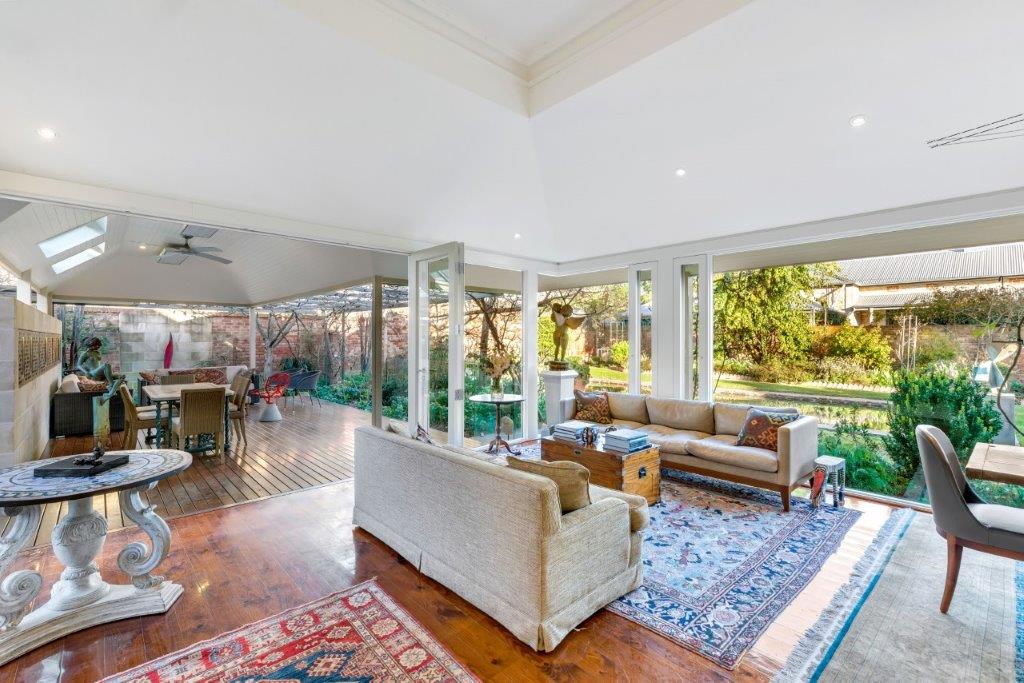 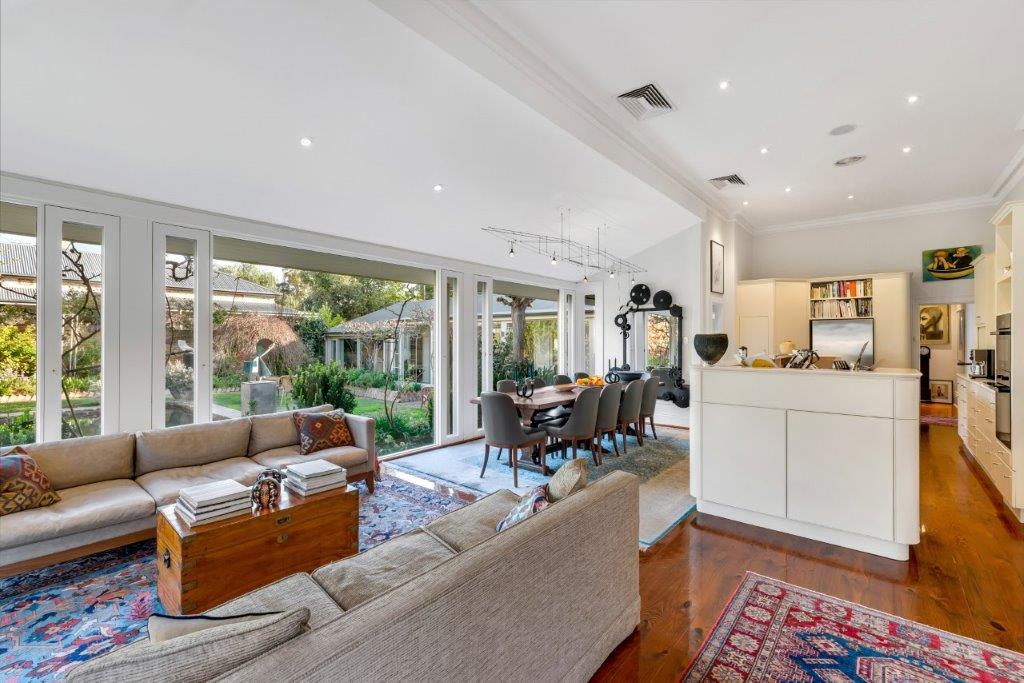 From the early 1990s, the home became a regular showpiece of the Open Gardens SA program and also featured in magazine spreads. Since then, Margaret has developed the grounds from a spring garden into a Mediterranean year-round garden that is easier to care for.

The couple has also previously owned a property at McLaren Vale, which Margaret developed into one of the state’s most famous gardens, Tipsy Hill, also a popular fixture on the Open Gardens scheme.

The Leabrook gentleman’s villa was built in the 1880s by vigneron William Patrick Auld, who was a member of John McDouall Stuart’s famous expedition across Australia from south to north in 1861-62.

Today, the home is configured with a stunning combination of modern and classic elements. 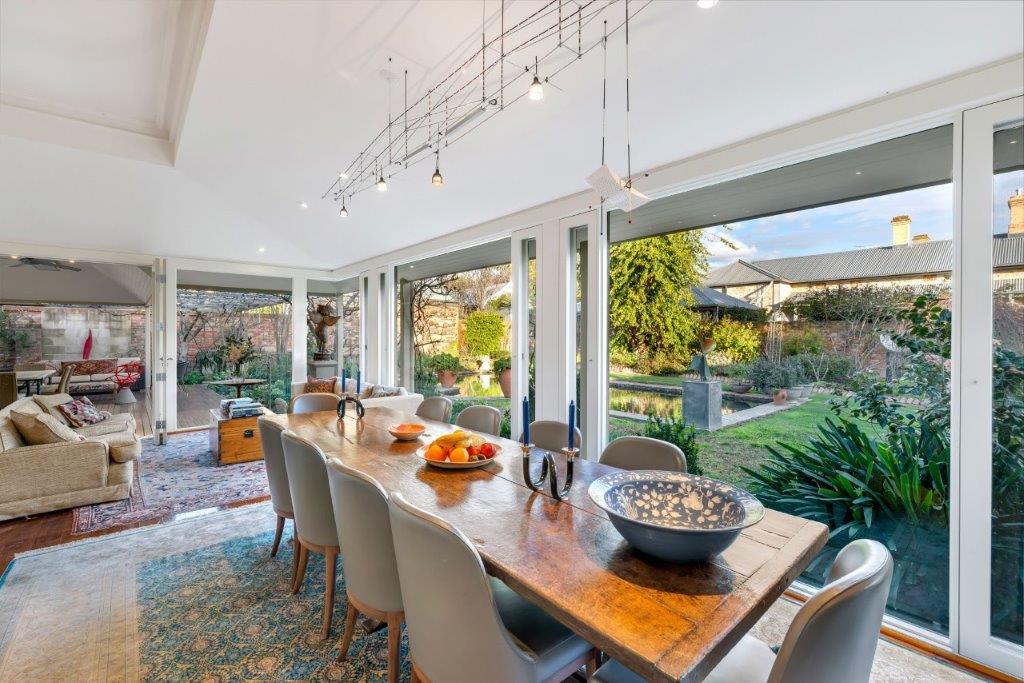 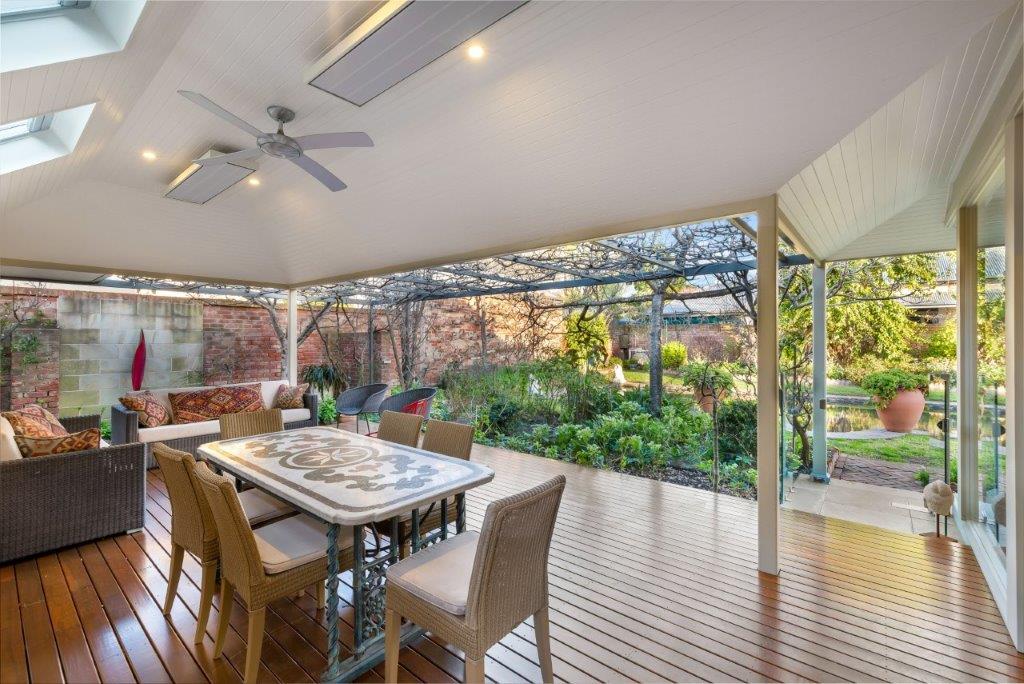 The couple has commissioned several renovations over the years, with the most recent renovations created by architects Rob Williams and Bec Ryan, formerly of Williams Burton Architects. The result is a elegant kitchen, living and dining room that looks out across the grounds and swimming pool, all serviced by modern bathrooms and laundry.

The entire L-shaped home is surrounded by gardens, with picturesque views from almost every room.

Classic detailing and finishes are present throughout the house, from stained glass around the front door to pressed metal ceilings, cornices and period fireplaces — all harmoniously matched with contemporary elements.

“The house has a beautiful feel of the early bluestone Victorian era and the rooms are in lovely proportions,” Margaret says. “The space in these villas is just wonderful.”

When their children were old enough, the couple installed a pool that has become the centrepiece of the rear garden. “The pool almost looks like a garden pond or a creek, and that’s exactly what it’s supposed to do with a brown marble-sheen on the bottom.” 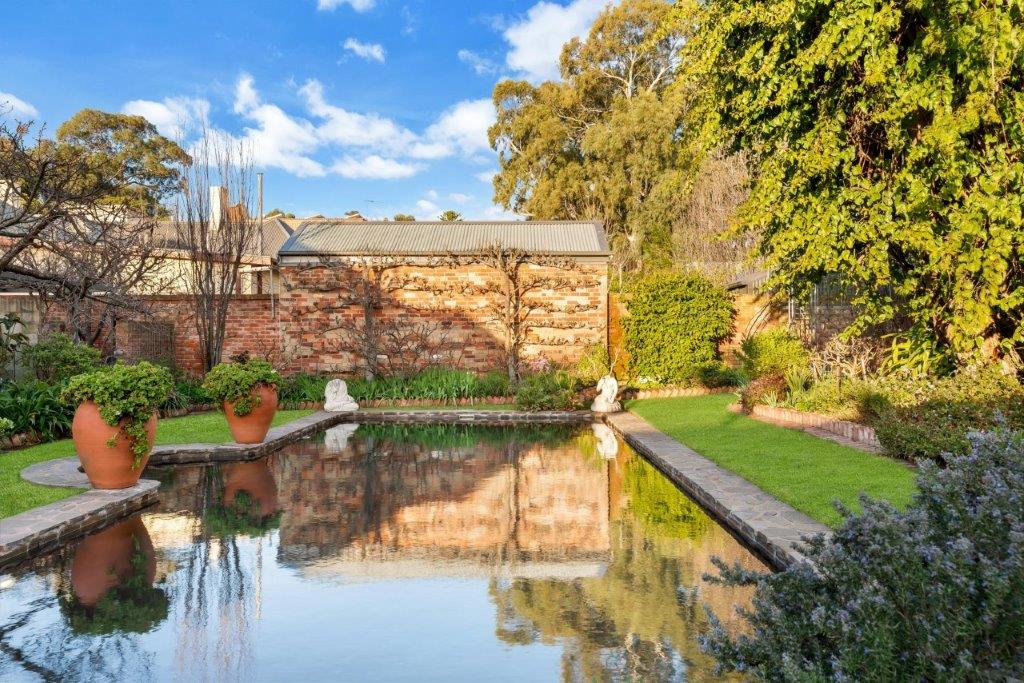 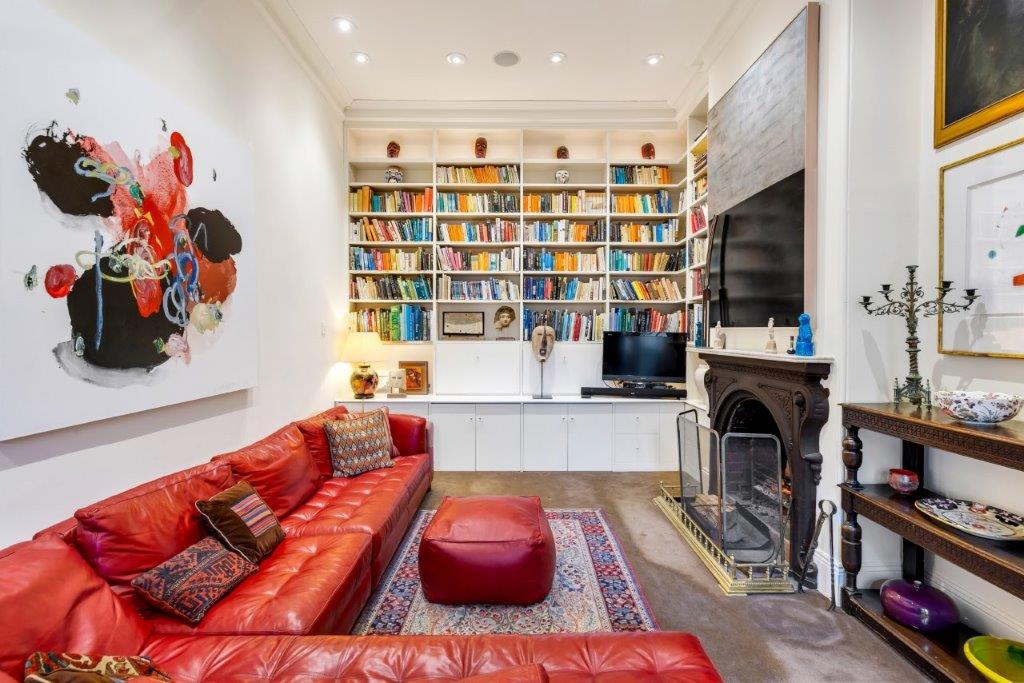 “There’s also a certain sense of humour in the way the house is put together. There are quirky things — when visitors go down into the cellar to find a bottle of wine, they’re surprised to find a comfortable, private bedroom there.”

The living space can be opened up to the sandstone-walled pavilion, which includes heating and fans for year-round entertaining. “The deck has a sandstone wall, into which we have set some lovely Persian tiles which I bought in Damascus, Syria, just before the war.

“It’s easy to host 80 to 100 people in this entertaining area, but at the same time when you shut the doors it’s small enough to be cosy for family,” Margaret says. 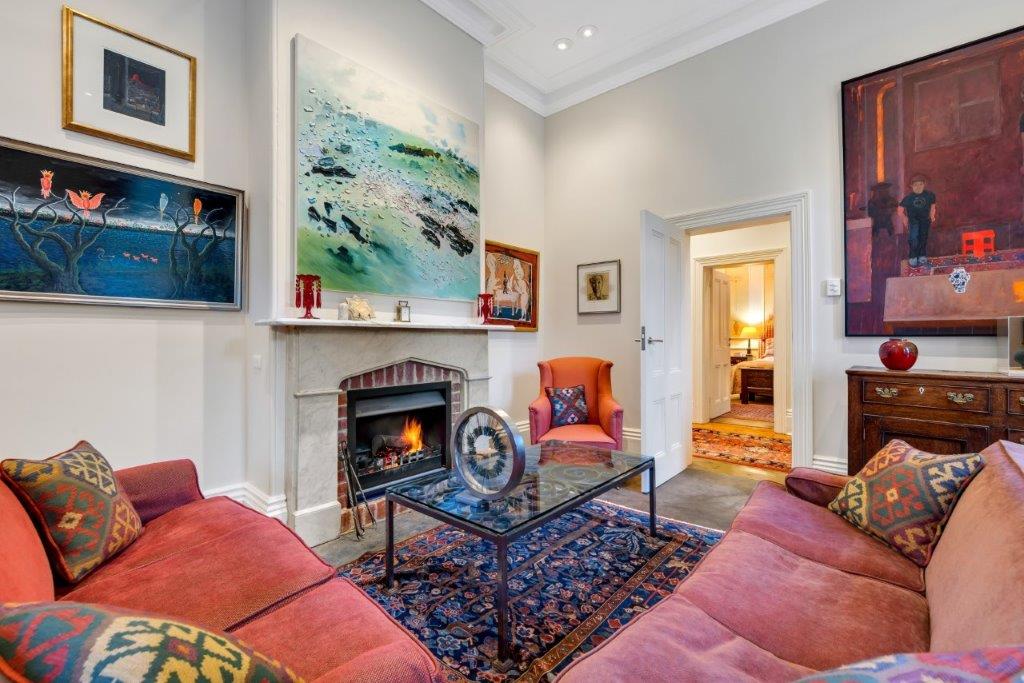 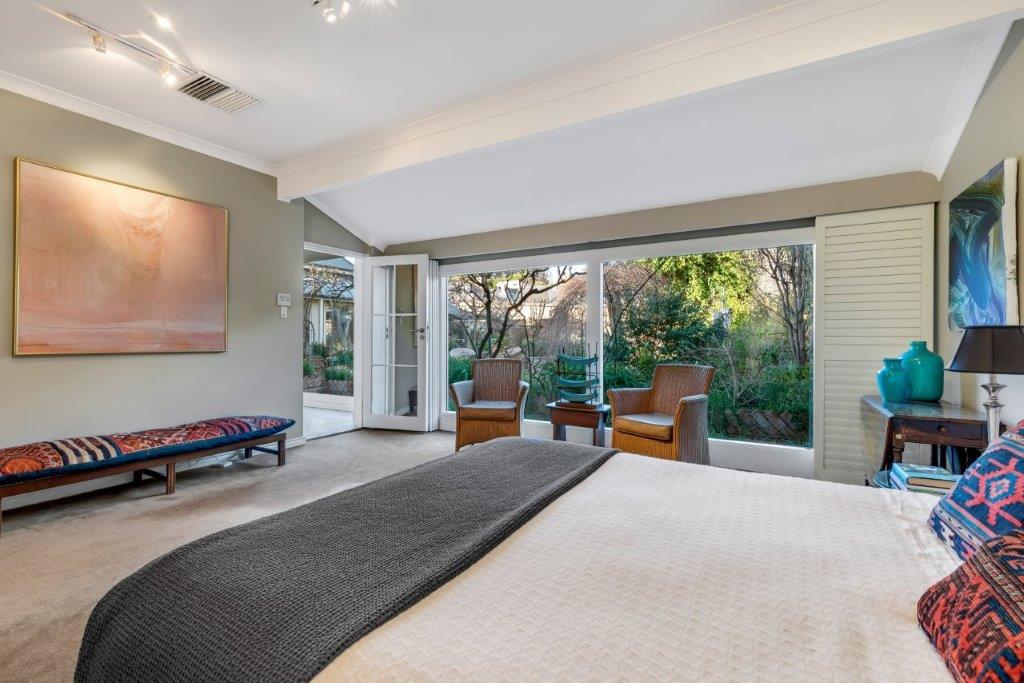 The bathroom also features Margaret’s favourite statue – a white female figure – which certainly doesn’t come with the house. “The architect Rob Williams said to me, ‘Margaret, you cannot have your best sculpture in the bathroom’. And I said, ‘Watch me, Rob’.” 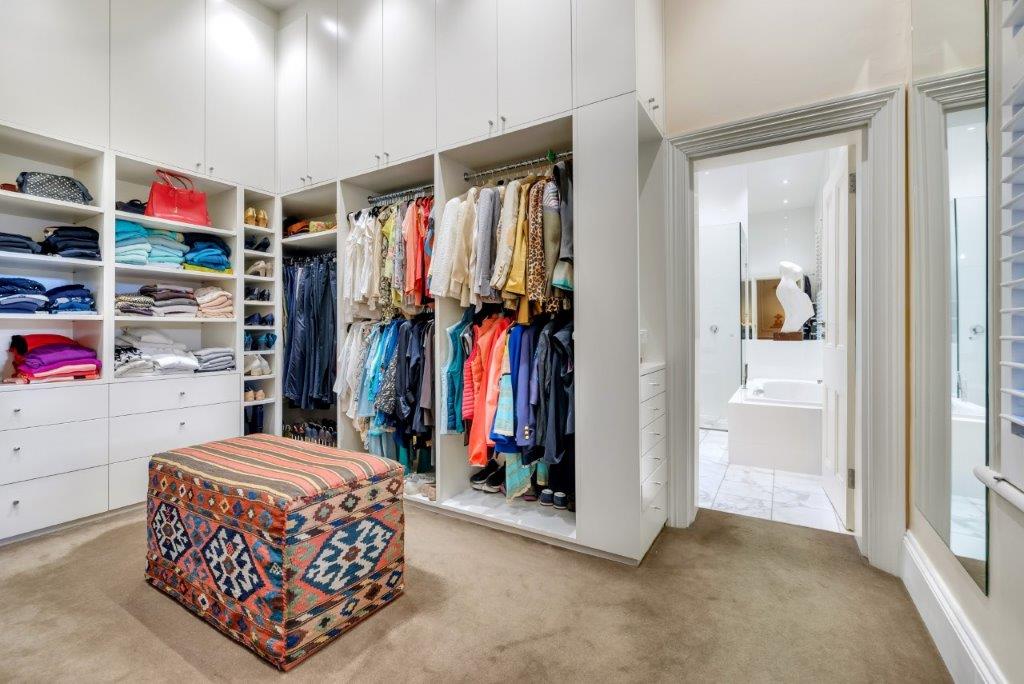 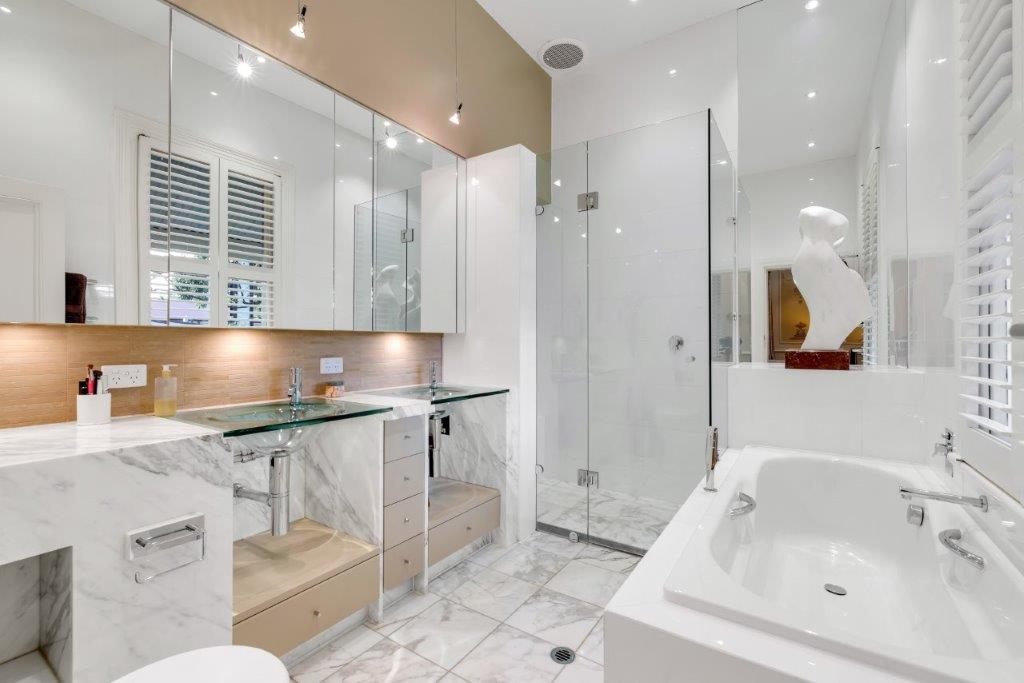 The bathroom feeds into a large walk-in wardrobe. “It does have a very nice wardrobe and I need every bit of it,” Margaret says.

The couple has created a separate consulting room with private access, a waiting room and a toilet, so that Margaret could operate her private practice from home. It is currently configured as a bedroom with its own bathroom, allowing the family to stay with their own separate living space.

“It has been a perfect home for a family and it’s wonderful for children. My boys had a blessed childhood because they were near very good public and private schools, they played on a little creek up the road, and Hazelwood Park is two blocks away,” Margaret says.

“Our house, our furniture, and our art have evolved over 41 years to a happy conclusion.”

The sale is being handled by Jock Gilbert of Williams Real Estate. 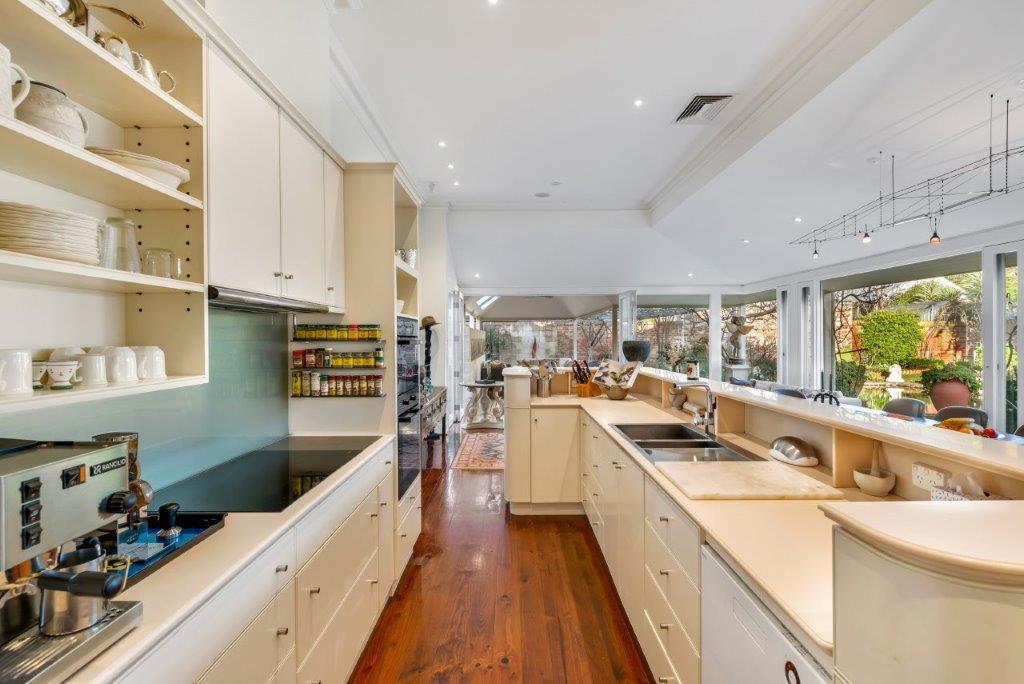 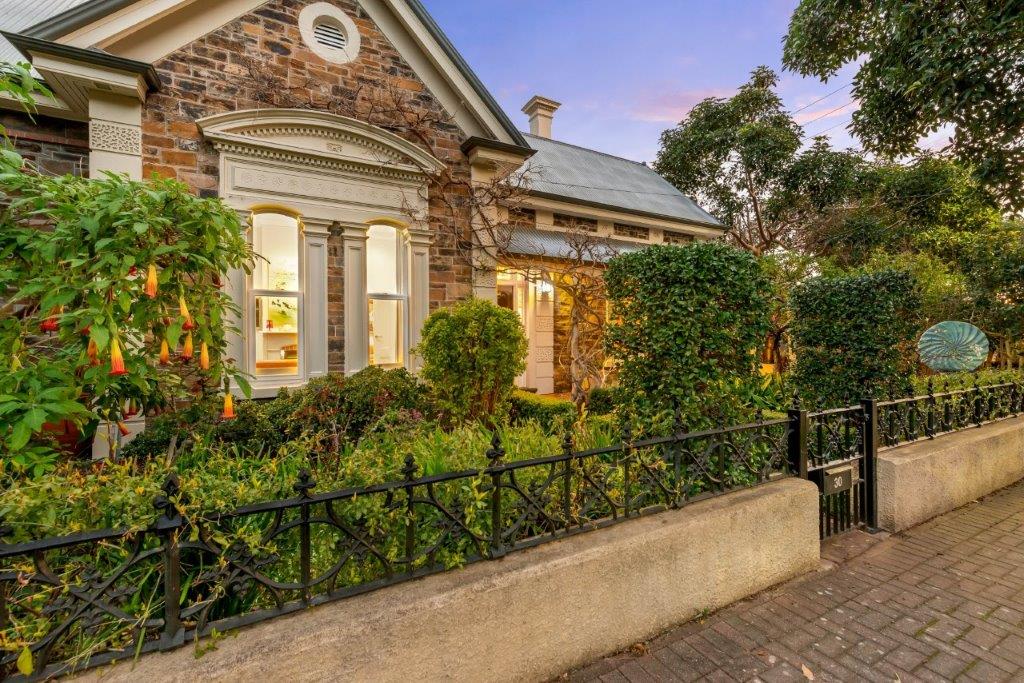 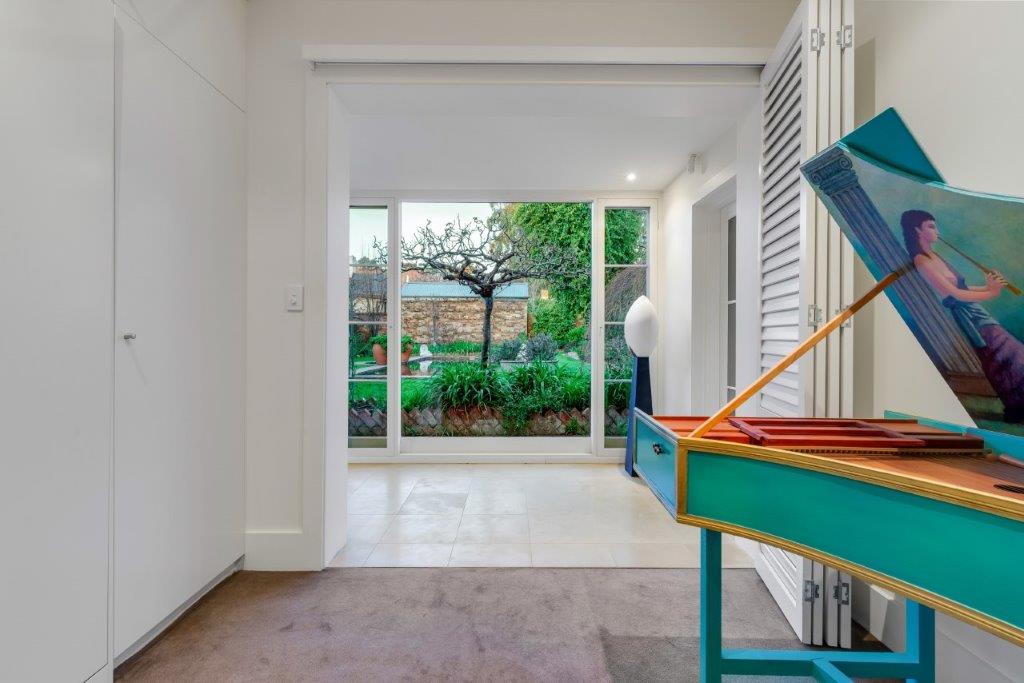 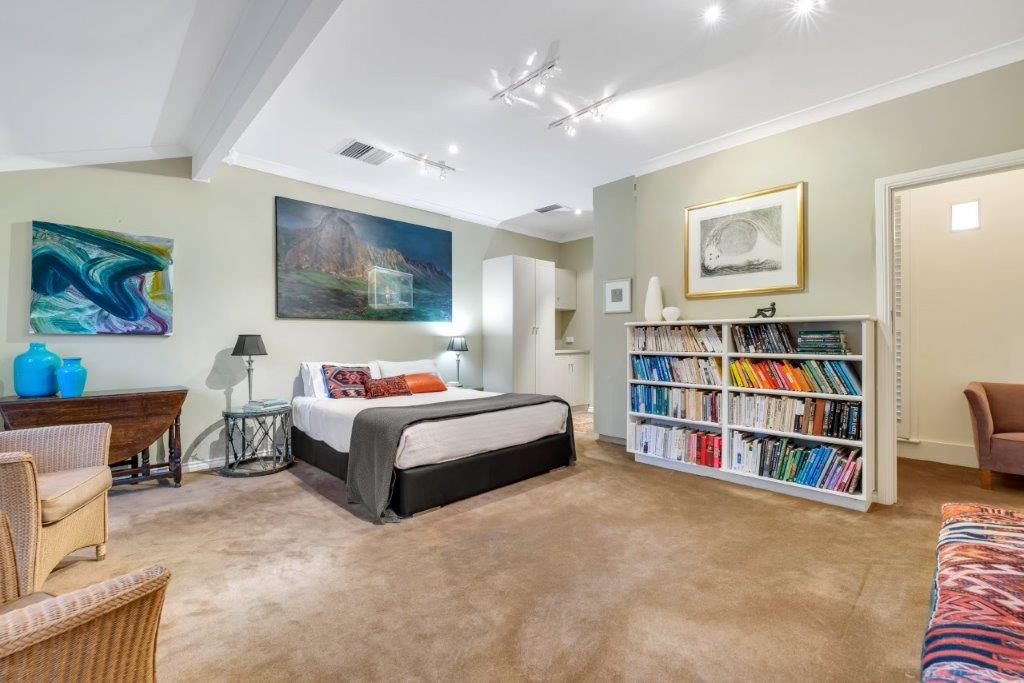