Recently listed to market, this fastidiously renovated mid-century home at Burnside has been attracting a huge amount of interest, with 180 people attending the first weekend of open inspections.

Owner Andrew Barlow was astonished by last weekend’s turnout to 5 Elizabeth Court, Burnside. The open inspection created something of a traffic bottleneck on the private cul-de-sac near the top of Greenhill Road in the Adelaide foothills.

“No one could fault the home,” Andrew says. “Everyone said the attention to detail was immaculate.”

Andrew purchased the home in 2015 and completed an impressive renovation and addition drawing on his experience working in the building industry. 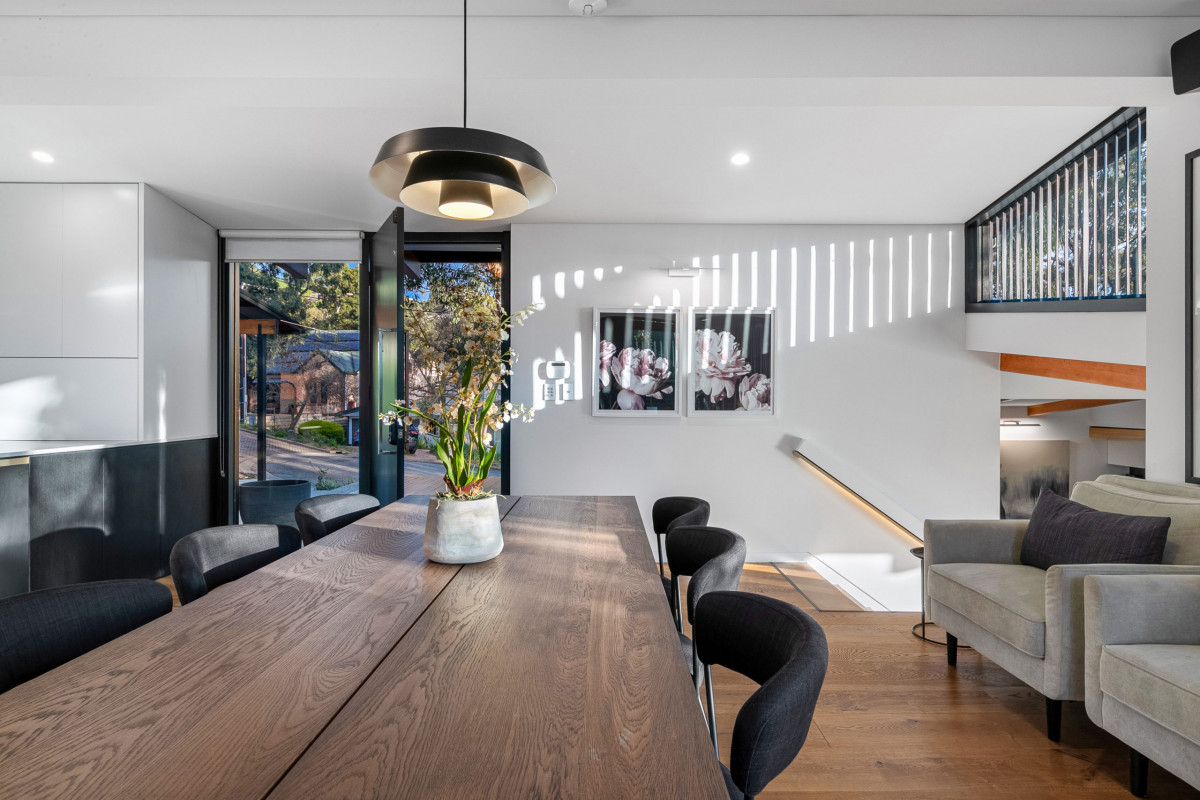 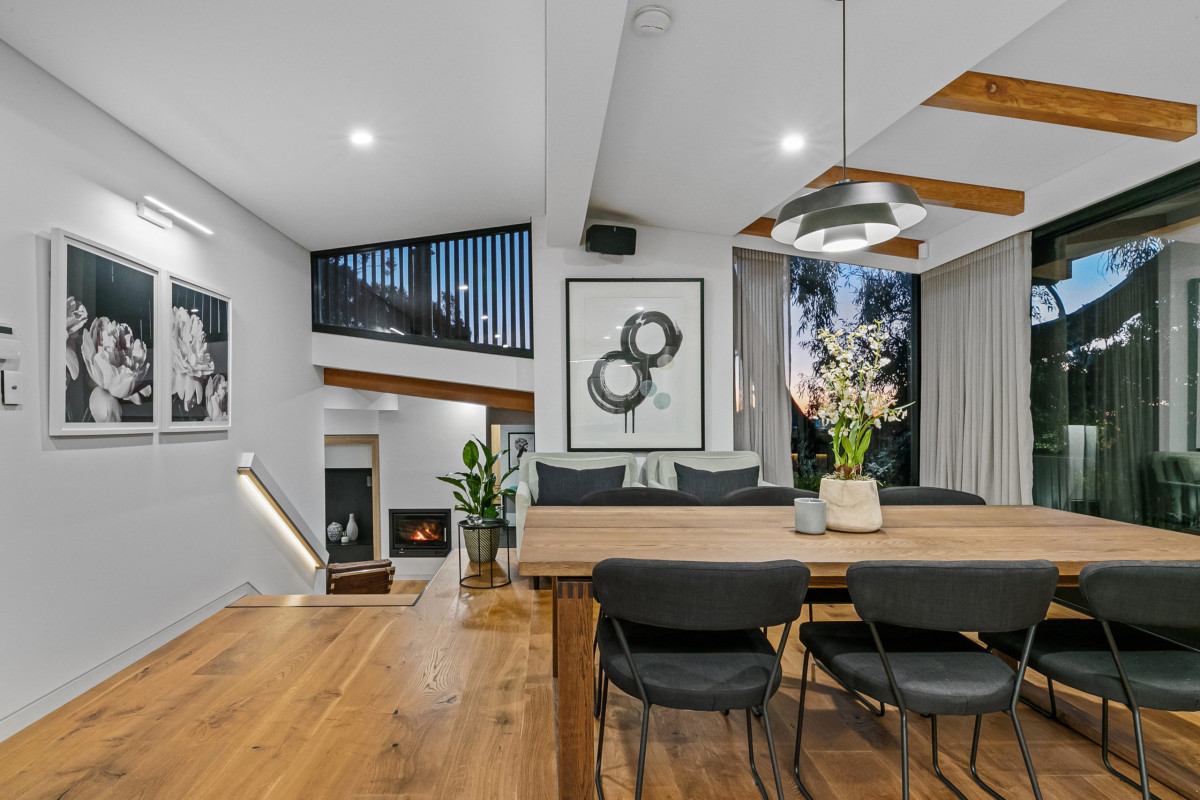 He is the founder of South Australian business General Plasterboard Repairs and has also founded two national businesses: Insurance Claim Rentals and Claimsafe.

The property is a far cry from how it looked five years ago when the home was listed for just over $700,000. The 1966-built split-level home was seemingly untouched after more than half a century.

“When I went to inspect the home there were other people walking around, and I heard a lot of them saying ‘there’s so much work to do here’,” Andrew remembers. “The bones were here and I saw potential in it.”

Impressed by the split-level design and the great location of the home Andrew had a vision for what it could become. 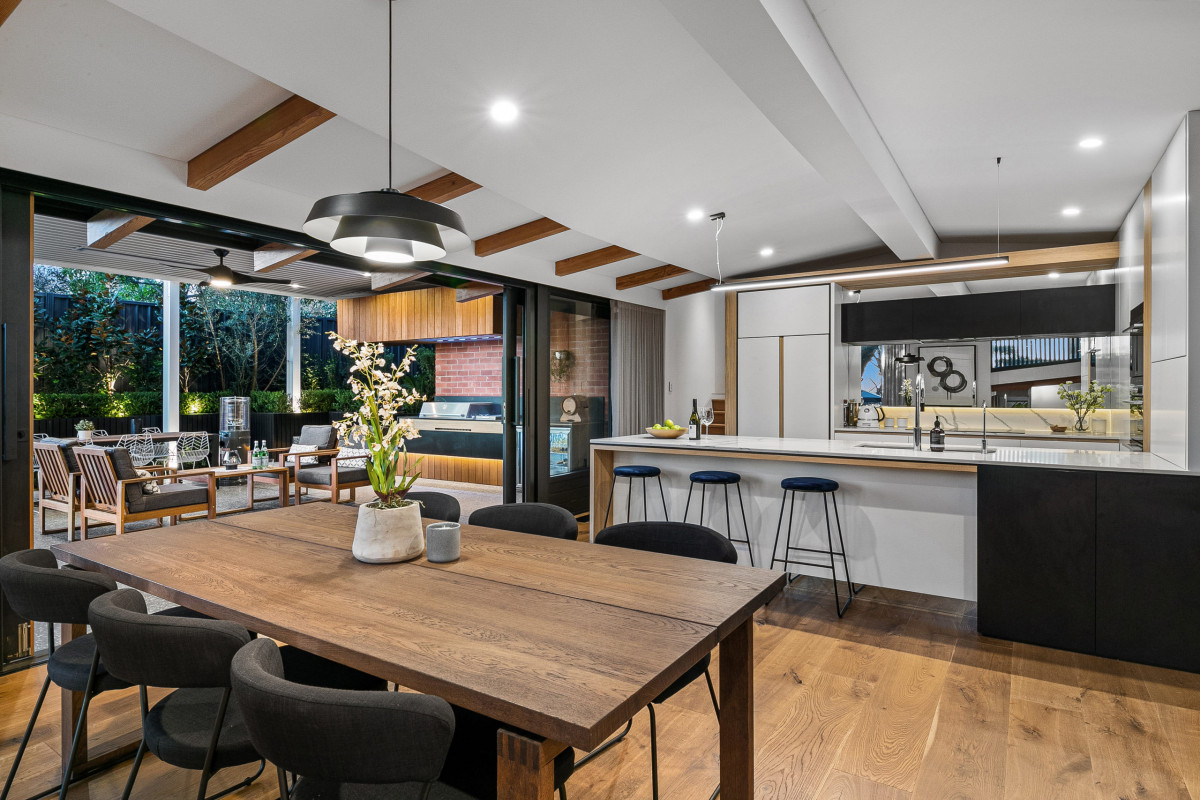 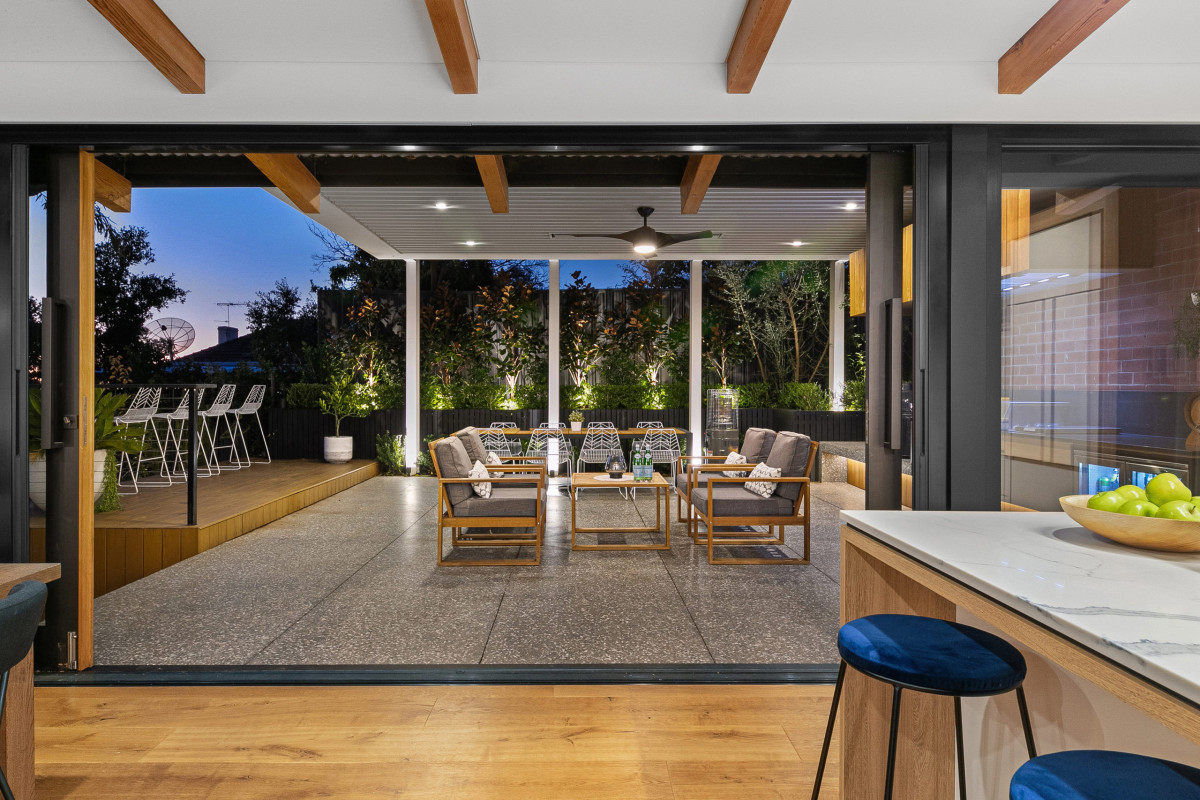 “I saw the potential to modernise and freshen it up while making the back yard more user-friendly because it was one big, sloping block. We’ve since levelled it all off and the garden is now flat with each of the three levels.”

Originally, the plan was just to complete some modest touch-ups – tidy a few things here and there and add a lick of fresh paint. But that quickly snowballed into a full-blown renovation and two extensions.

“Once we started it turned into a full reno; a pretty crazy one when I stop and think about it. The only things we kept original were the brick walls and the original windows. The entire floors have been gutted with new floor joists installed. It’s basically a new home,” Andrew says.

“It was intended to be our house to live in, not for resale, so we didn’t cut any corners. We did everything to the best standard possible.” 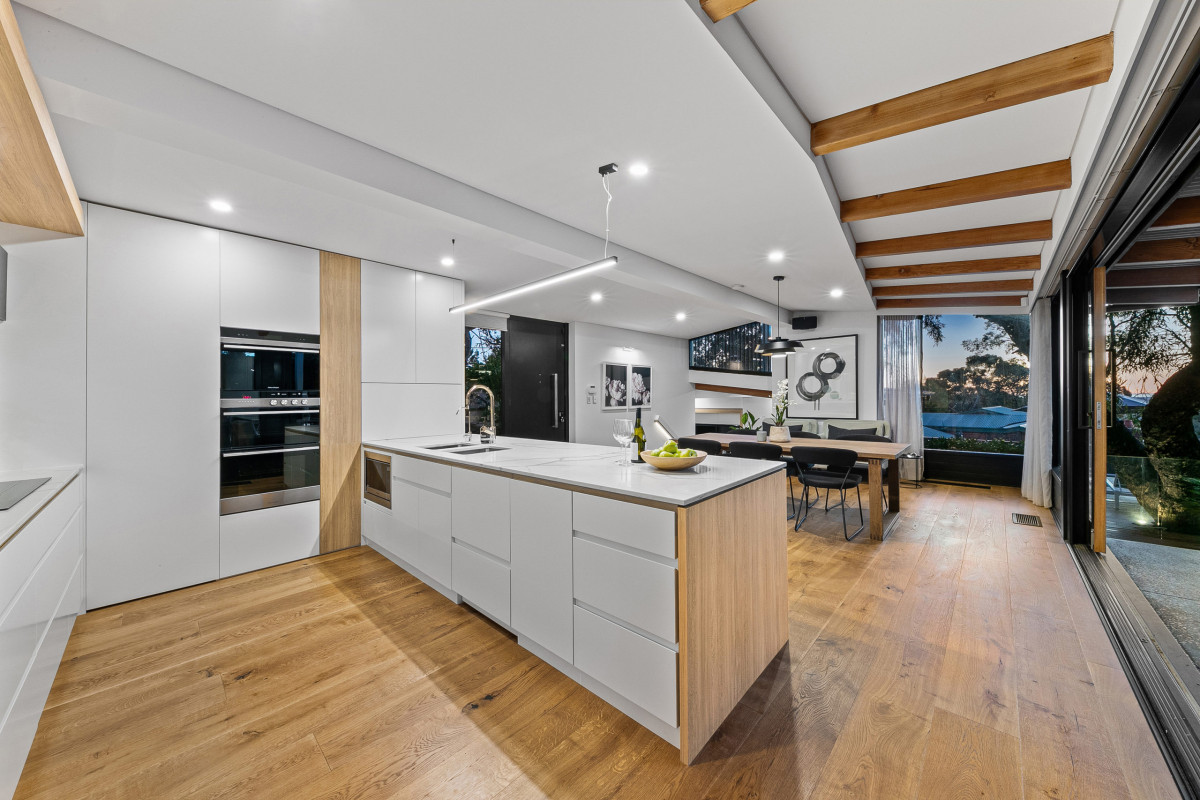 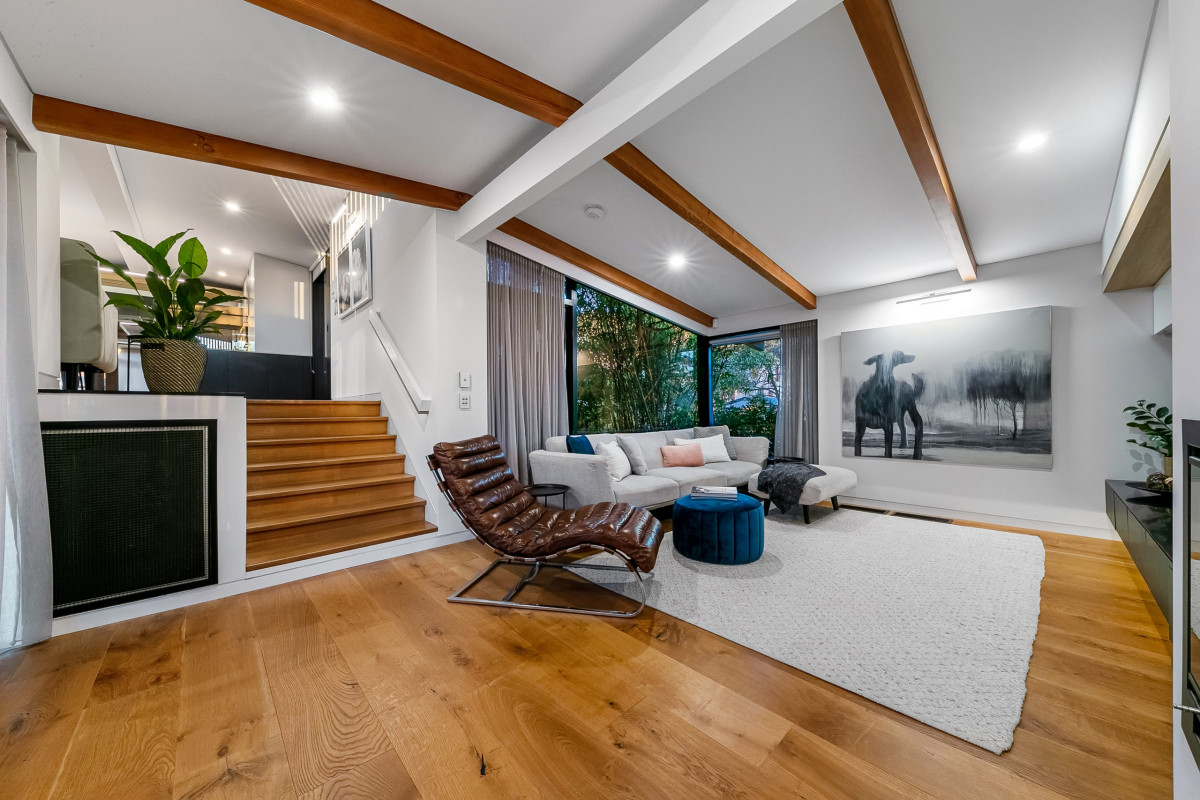 Renovating one level at a time, Andrew and his family lived in different parts of the home while chipping away at the project over a two-year period.

With his experience in the building industry, Andrew completed much of the work himself, along with tradespeople from his business.

Two extensions were added to either end of the house, with a laundry on the eastern side, and a spacious luxury master wing added to the western side, finished with black external cladding.

“The good thing about doing it yourself is you can change things as you go. It’s the little features that people often don’t think of that really make the whole house,” Andrew says. 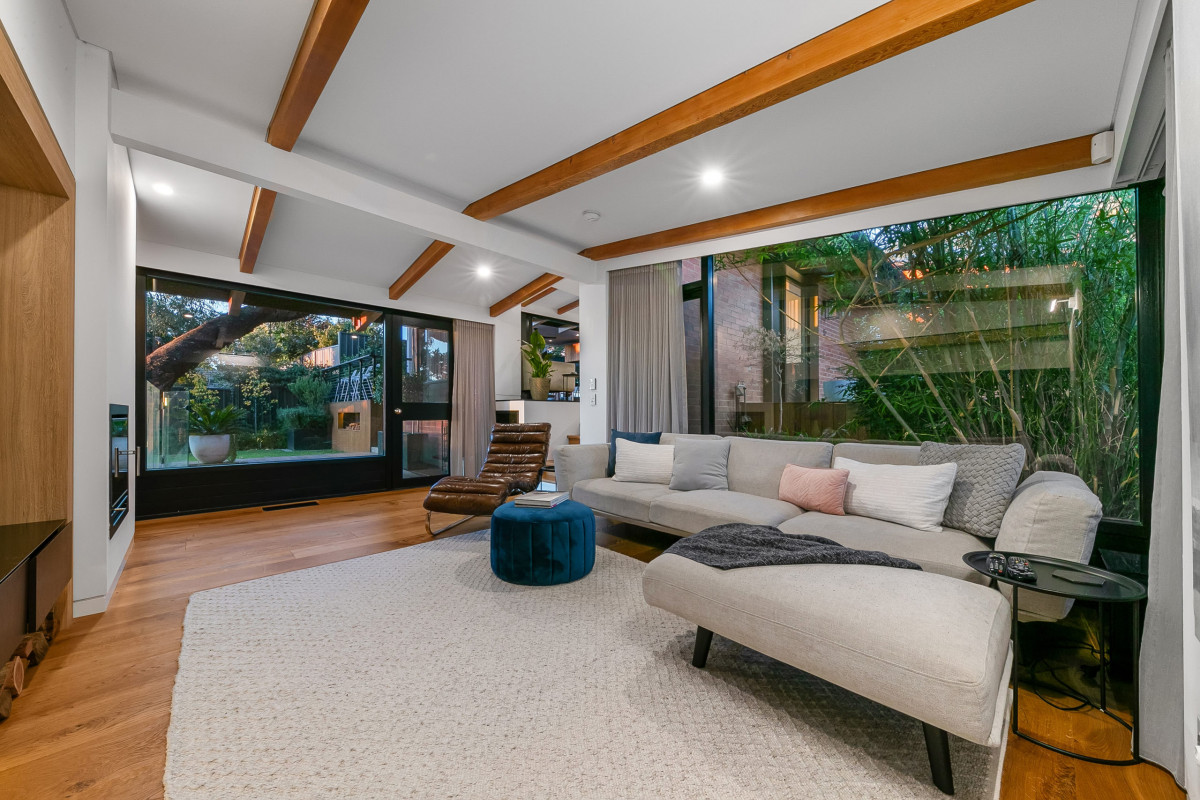 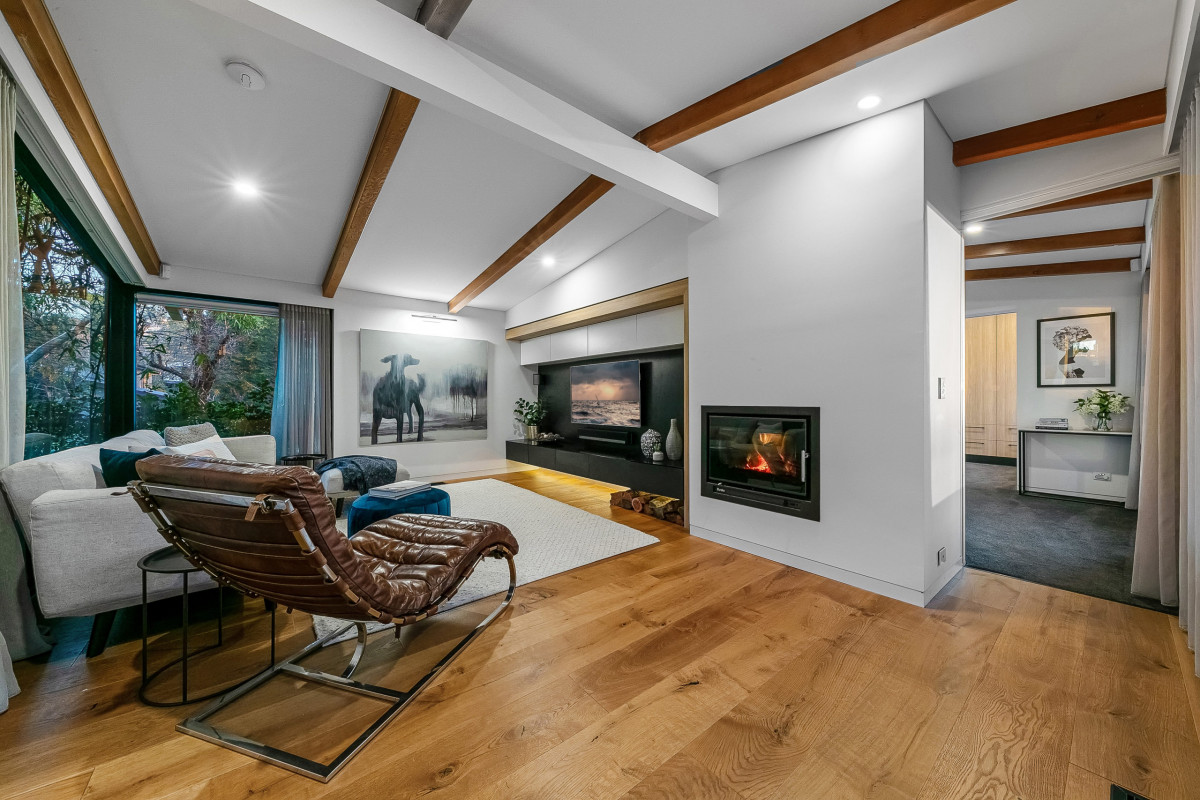 “I like that it’s a bit different and I love the split-level feel. We’re up high on the hill, and when the sun sets you get really nice light coming into the property through the windows.”

Sympathetic to the mid-century design, a new driveway and front stairway take visitors up to the front door, which opens into the family and dining area. On the left, a set of stairs leads down to the lounge room and through to the western wing, while to the right, another set of stairs leads up from the central hub to the three bedrooms, laundry and mail bathroom.

The master bedroom and dressing room have views of the plunge pool and back yard, while the en suite has a deep soaking tub framed by a large window that enjoys sunset views.

With double sinks, a large vanity and double showers, this expansive resort-style bathroom has it all. 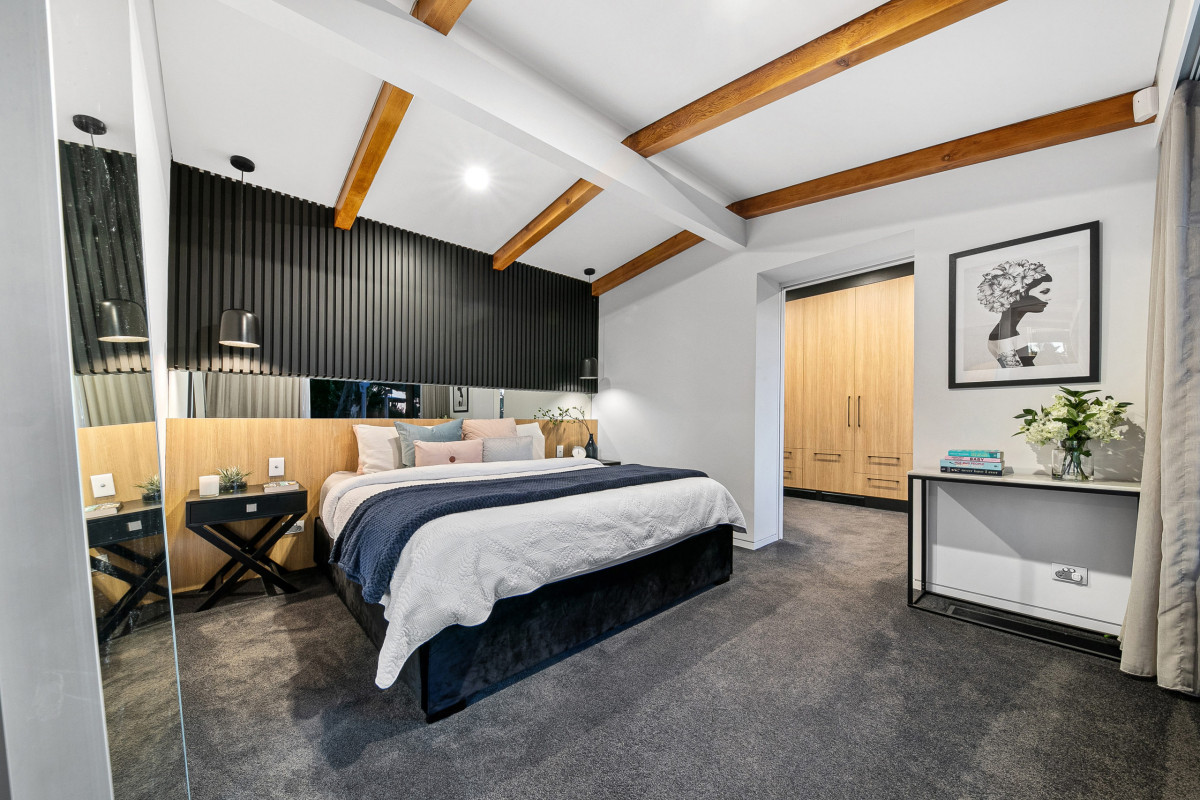 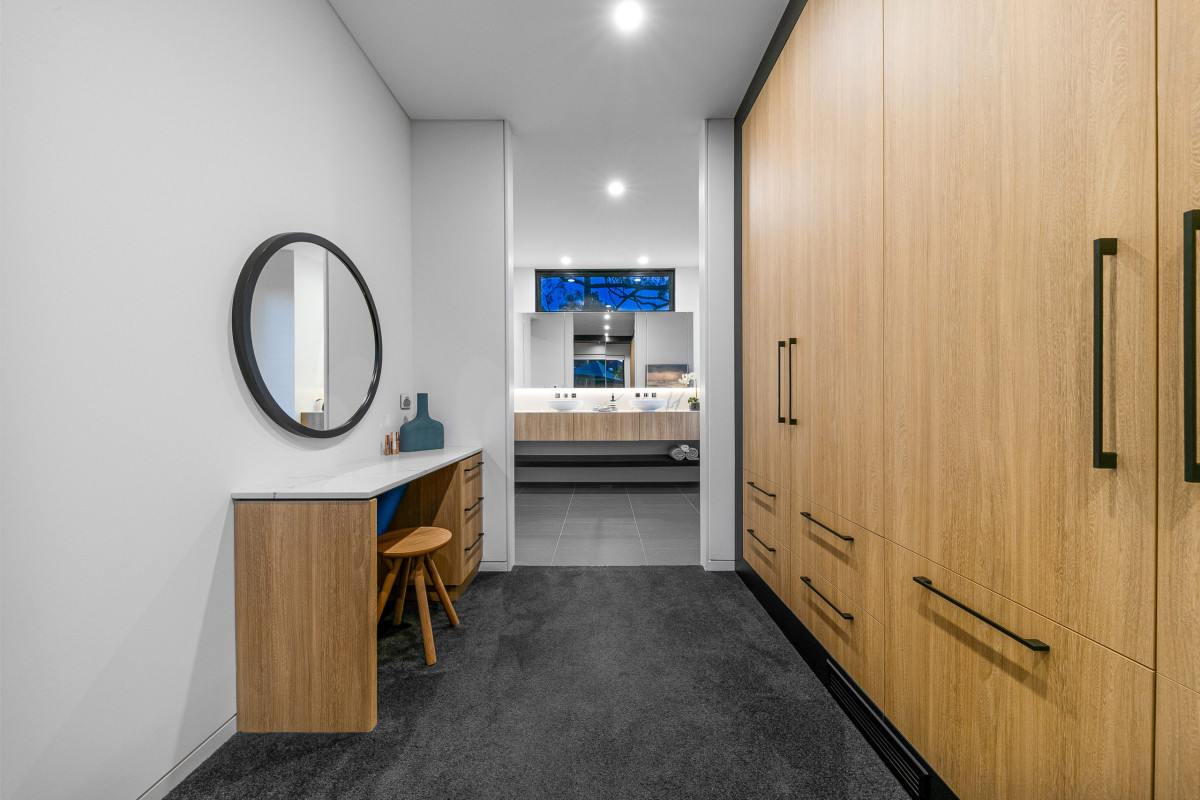 Window placement has been well-considered throughout the home, with a number of highlight windows and large panes of glass that enjoy views of the evening sky or greenery of the garden.

The master bedroom has a unique pitched roof and a feature wall of black timber and woodgrain separated by mirrored strip behind the bedhead.

With its combustion heater, the family room is a cosy gathering spot in winter, while in summer the industrial sliding glass doors of the living room can be opened to a spacious outdoor entertaining area. 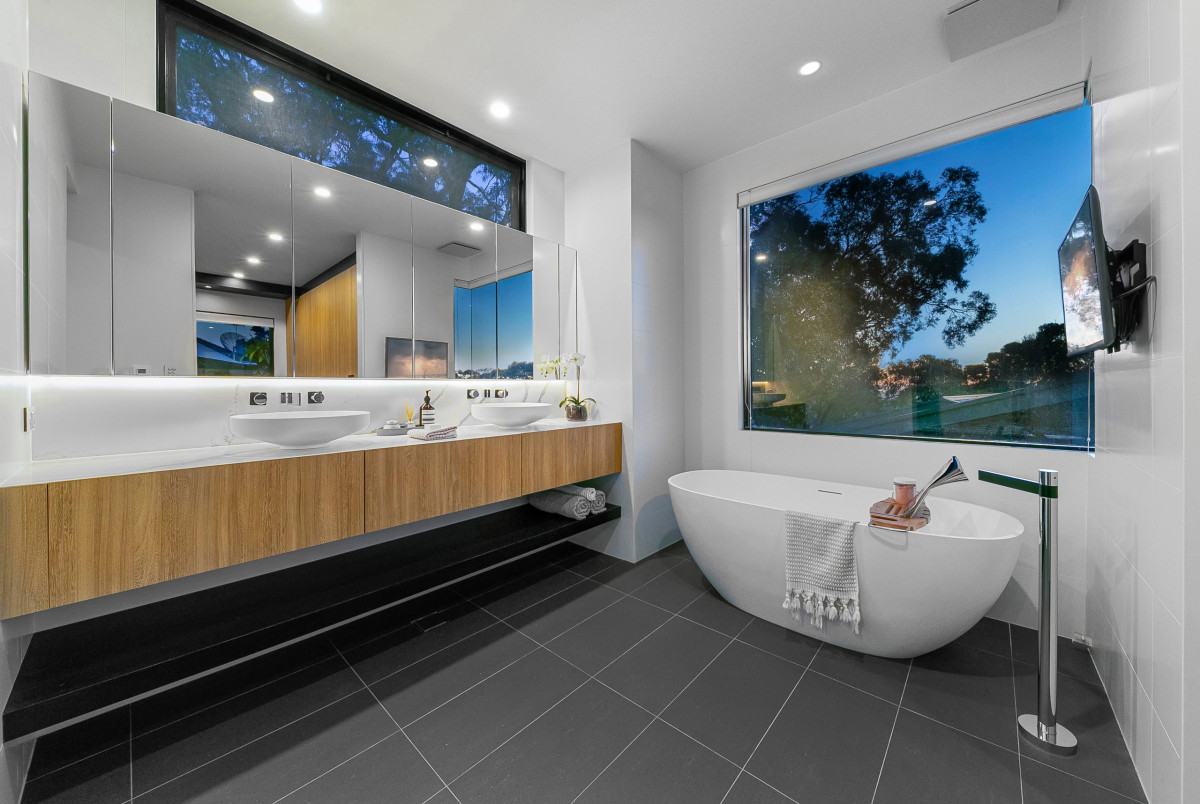 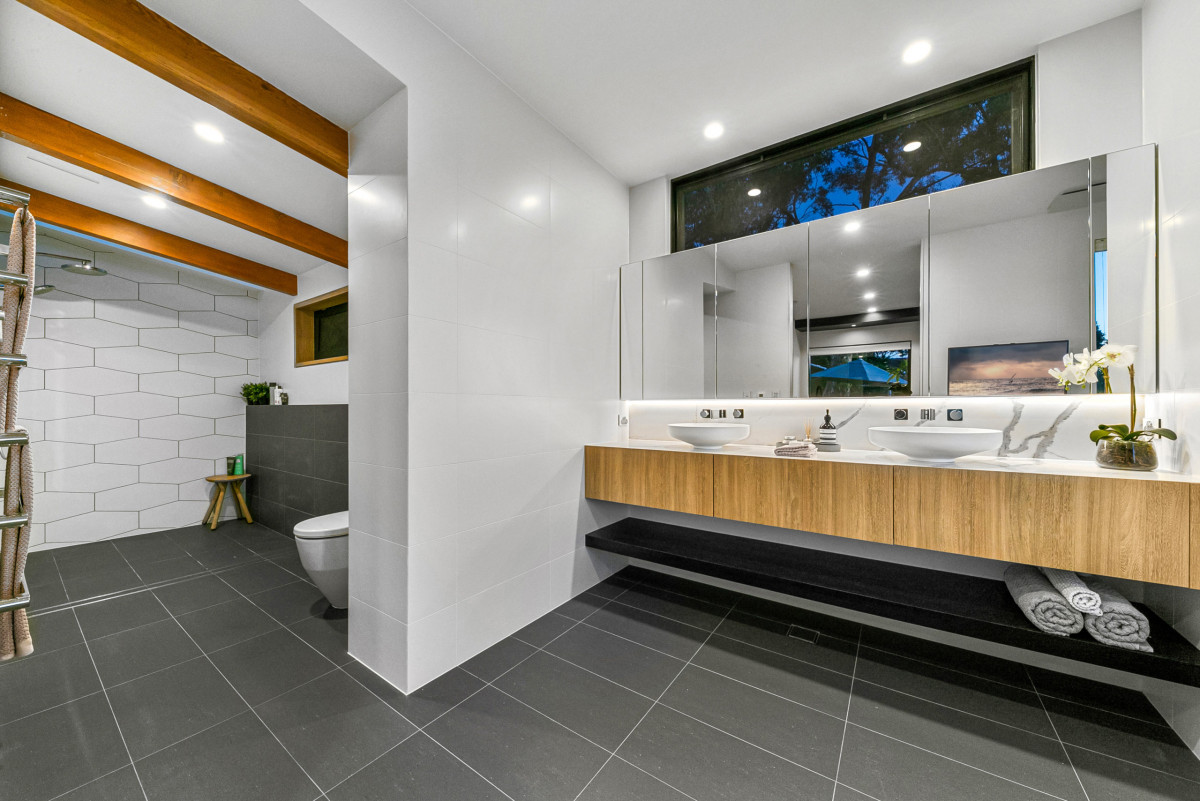 The lower deck area is constructed with blackbutt timber and surrounds a heated plunge pool with spa jets. The decking also encircles one of the property’s impressive large trees, which is a key feature of the back yard.

“I’ll miss the uniqueness of it all, and particularly the entertaining area. It’s really nice to sit out there with the view, the pool and the misters around the pergola. When you put those on in summer it feels like a beer garden.”

The sale is being handled by Nick Borrelli and Zachary Mckee of Ray White Real Estate. 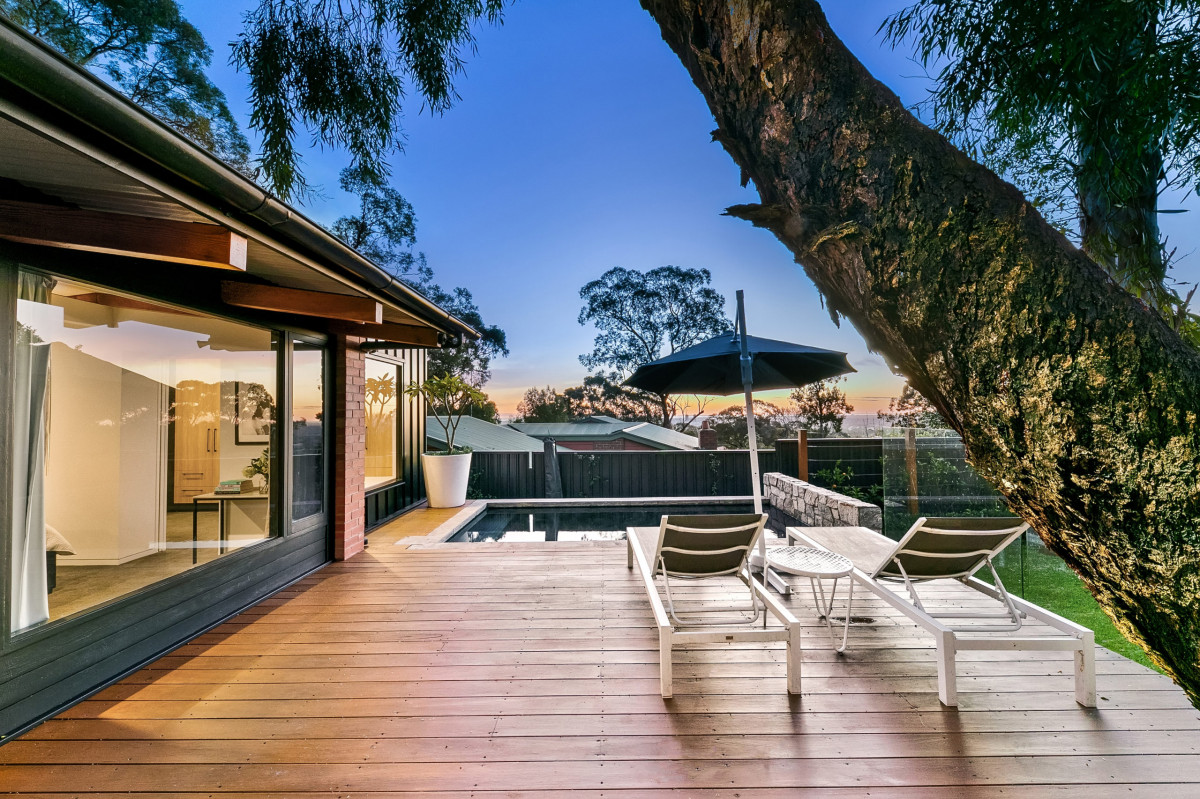 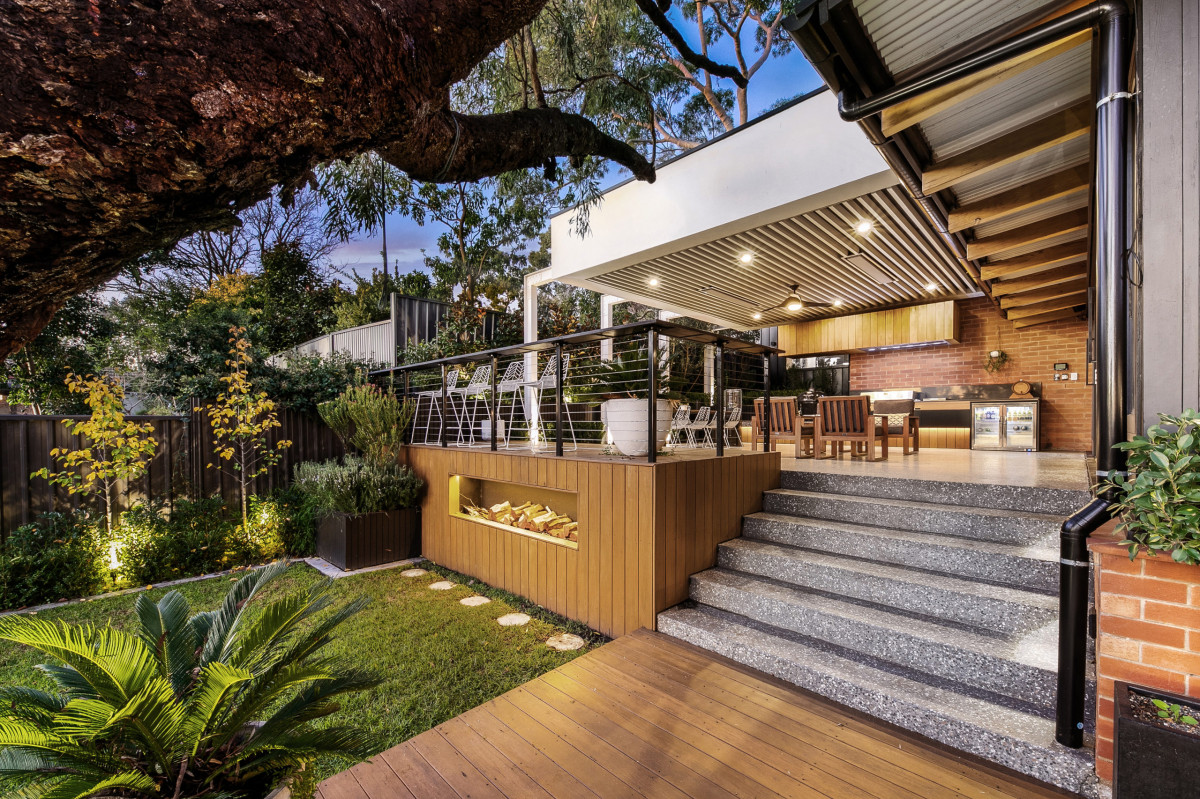 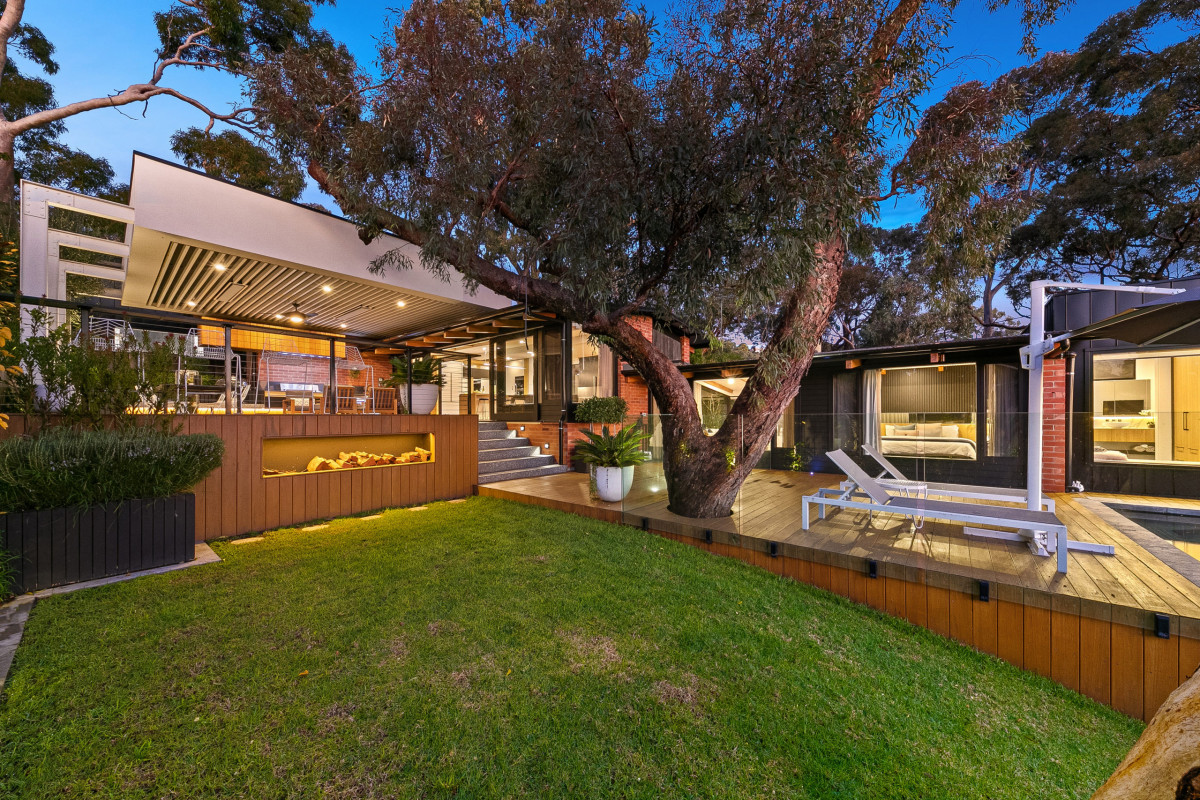