After almost 20 years, Tamra and Anthony Babyska are selling their multi-storey family entertainer, complete with a resort-style pool and the home office that launched their daughters' successful fashion label.

Mitcham’s Tamra and Anthony Babyska are selling their beloved family home at 4A Hoggs Road, which they commissioned Medallion Homes to build in 2002.

The semi-retired couple are downsizing from the four-bedroom property which has given their daughters Georgie and Alex a place to grow up, study, and even forge a successful fashion business.

“The house has been great, but it’s too big for just us and it’s time to move on,” Tamra says.

“It’s special when you’ve got a house you’ve created for your family. Times change and you’ve just got to change with them.” 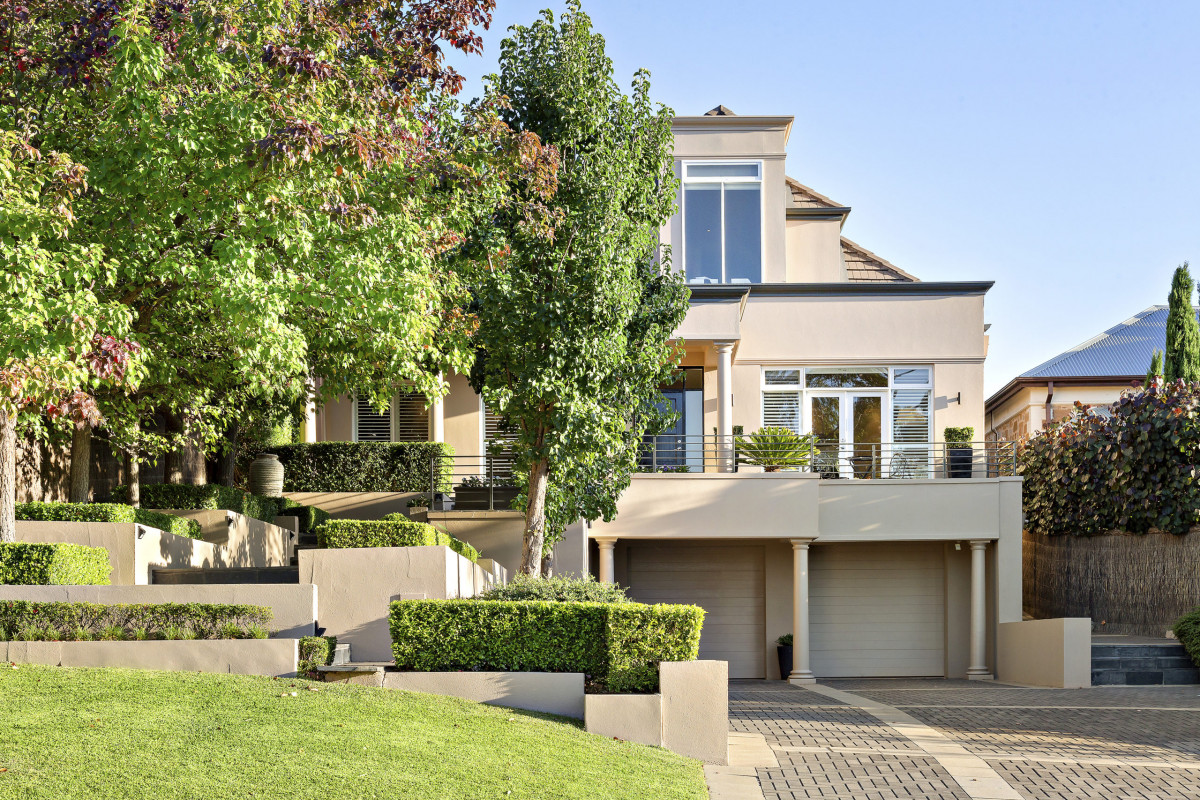 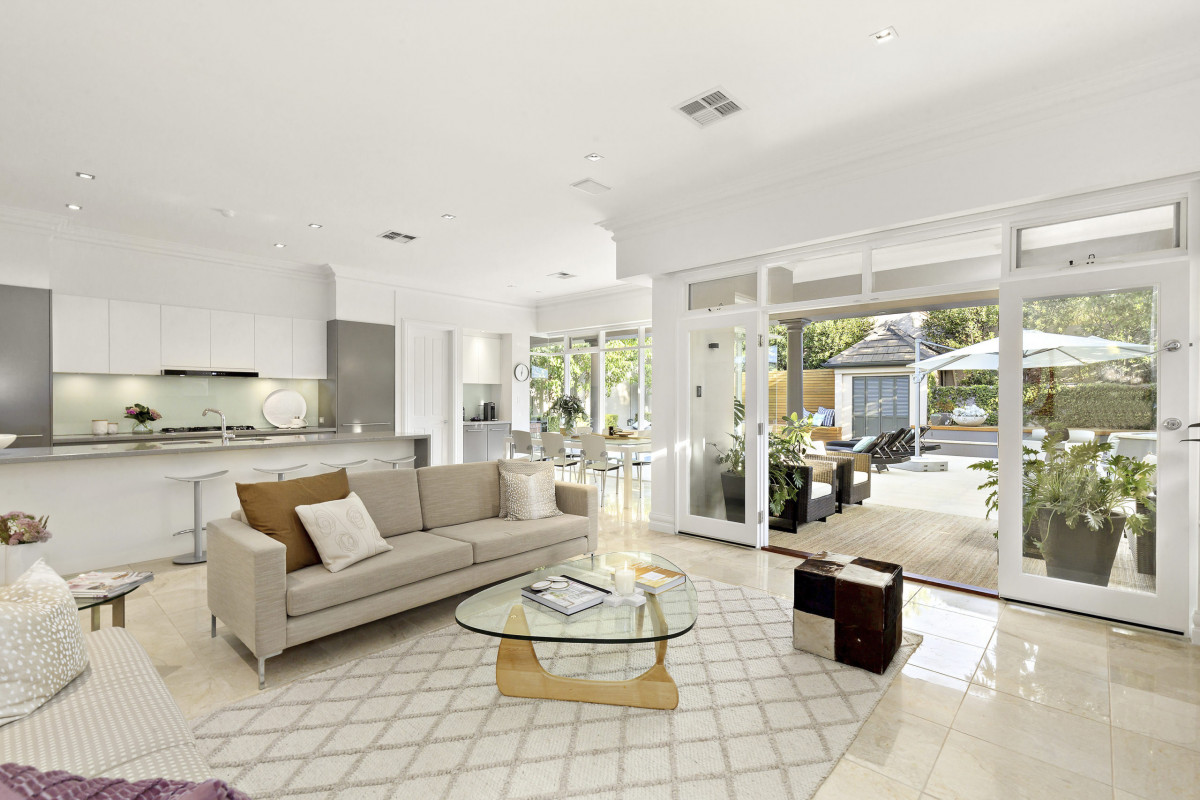 When Anthony and Tamra purchased the land about 20 years ago, it had been owned by a neighbour who used it as a flower garden.

“We wanted a block with beautiful views,” Tamra says. “We have gorgeous sunsets up here, and we’ve got views of the city and the coast.”

The couple then went about designing their ideal family home, with a focus on open spaces and entertaining, and the provision of an upstairs retreat for Georgie and Alex to live and study.

Careful consideration went into every detail. The timeless design incorporates modern and classic touches, with cornices, coffered ceilings and marble and limestone tiling throughout the kitchen and family room.

“We spent a lot of time thinking about the look that we wanted and it’s carried us right through until now. It’s a house that hasn’t dated,” Tamra says. 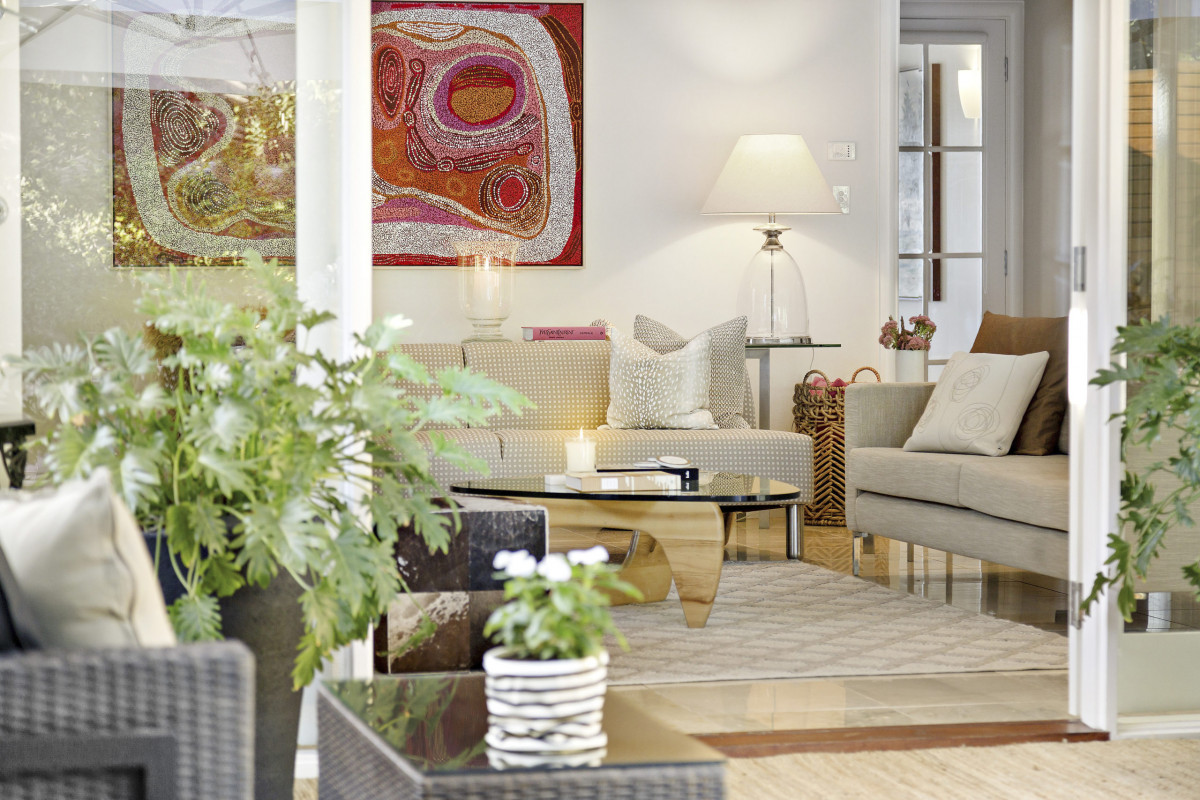 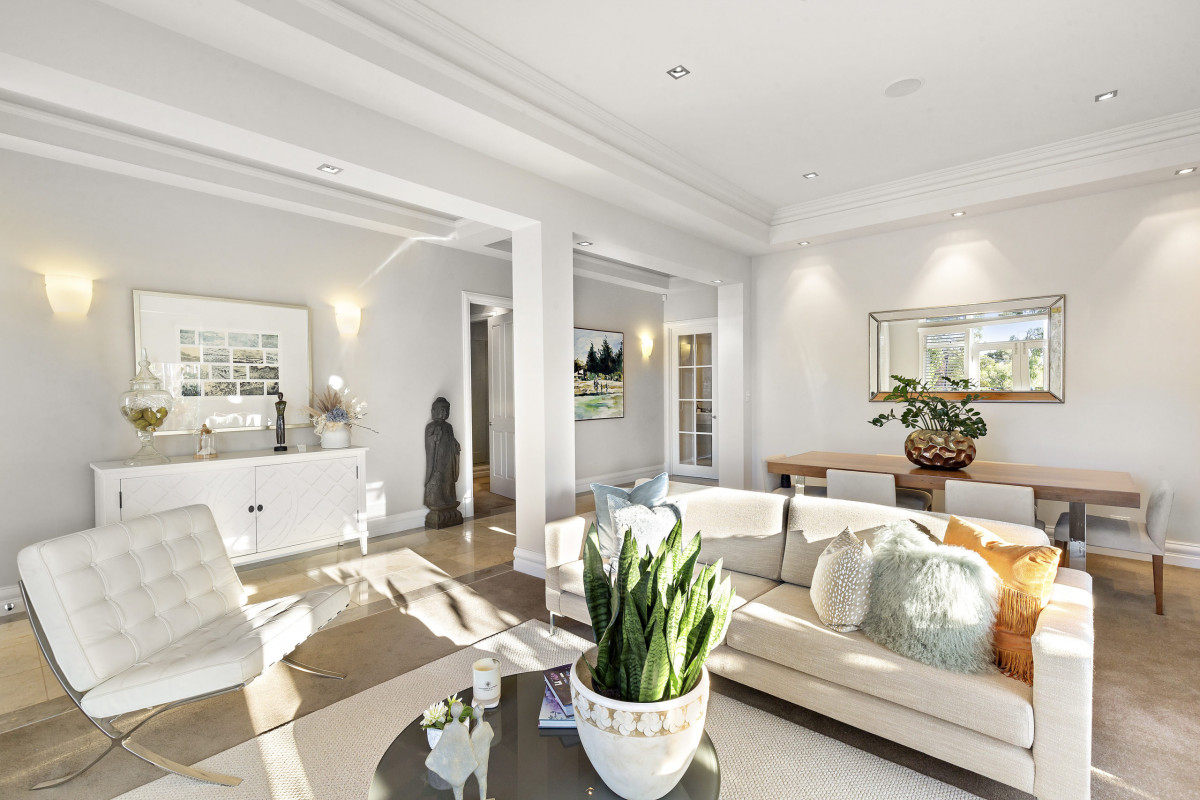 “People who’ve been through the house say they can’t believe it’s 18 years old, because it looks as good as it did back then. I still love the colours, the fittings, the fixtures, and tapware. It has certainly stood the test of time.”

Less than three years ago, Georgie and Alex started fashion label Bubish, which they operated entirely from their home.

From a business that started in the home, the siblings now have an online store as well as an impressive range of stockists across Australia and even New York. They also have a puffer jacket label, Toast Society.

“It was very much a part-time thing,” Tamra says. “They were both doing different things – Alex was studying marketing and Georgie international tourism. 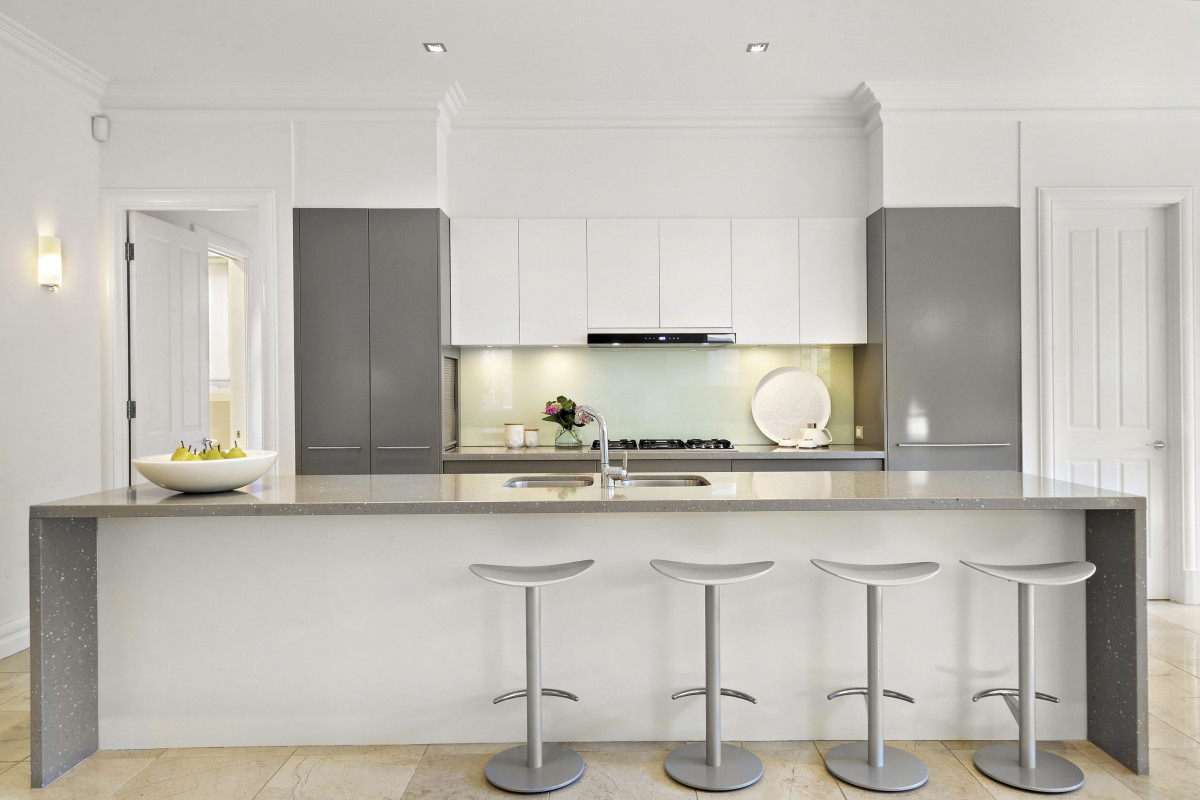 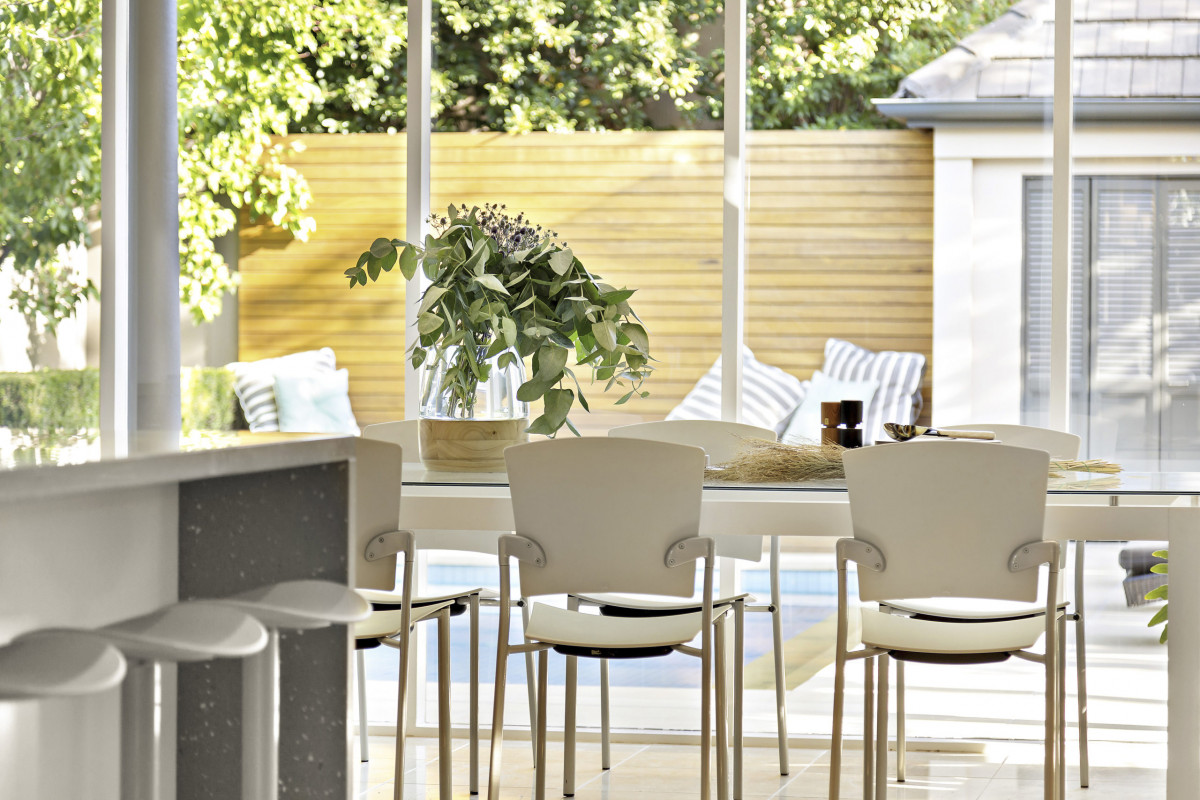 “They started to get seriously into it, gave up their full-time jobs 18 months ago and actually started working from here as their main office. They have expanded fairly quickly and now have a studio and warehouse in the city.”

When designing the home, Tamra and Anthony created a floor plan that would create a seamless blend between the open kitchen and living space, and the outdoor entertaining.

The property has been a perfect family home with multiple living spaces, three bathrooms and studies spread across the two levels.

“We were mindful of our girls being able to grow into the home. We created separate living, bedroom and study areas upstairs – away from the hub of the house,” she says. 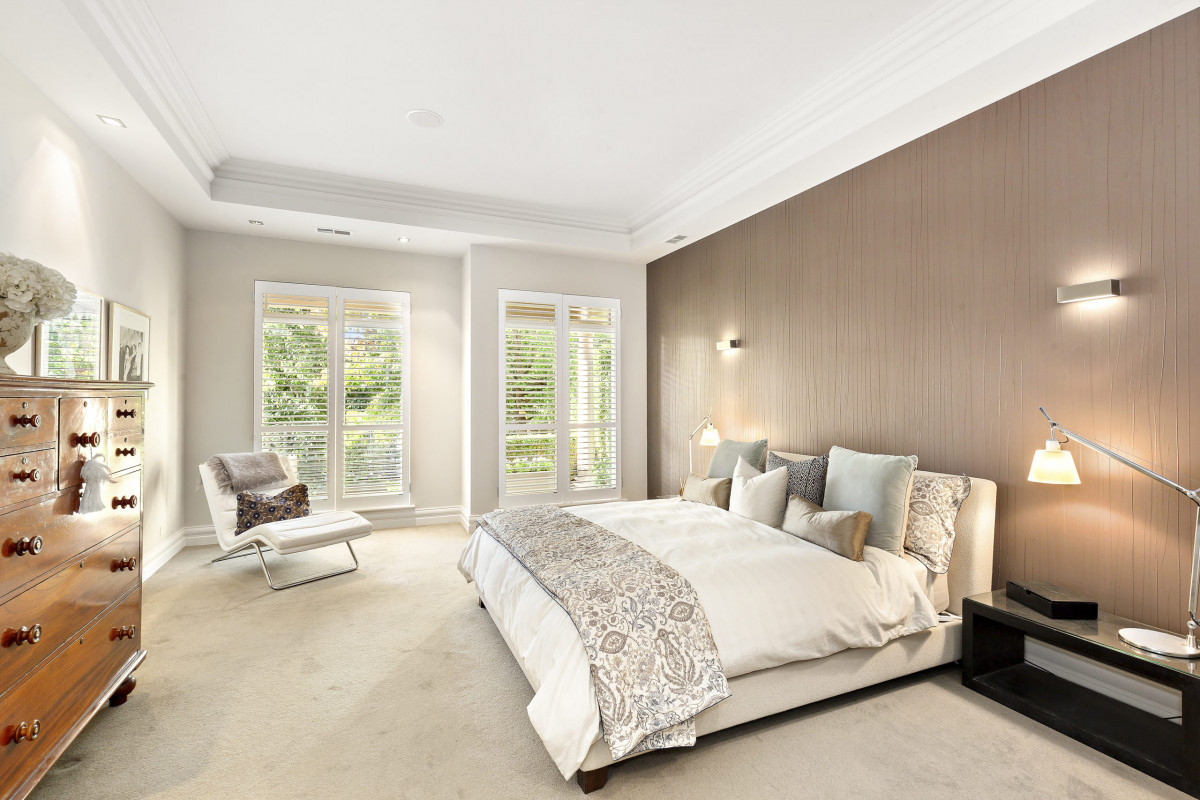 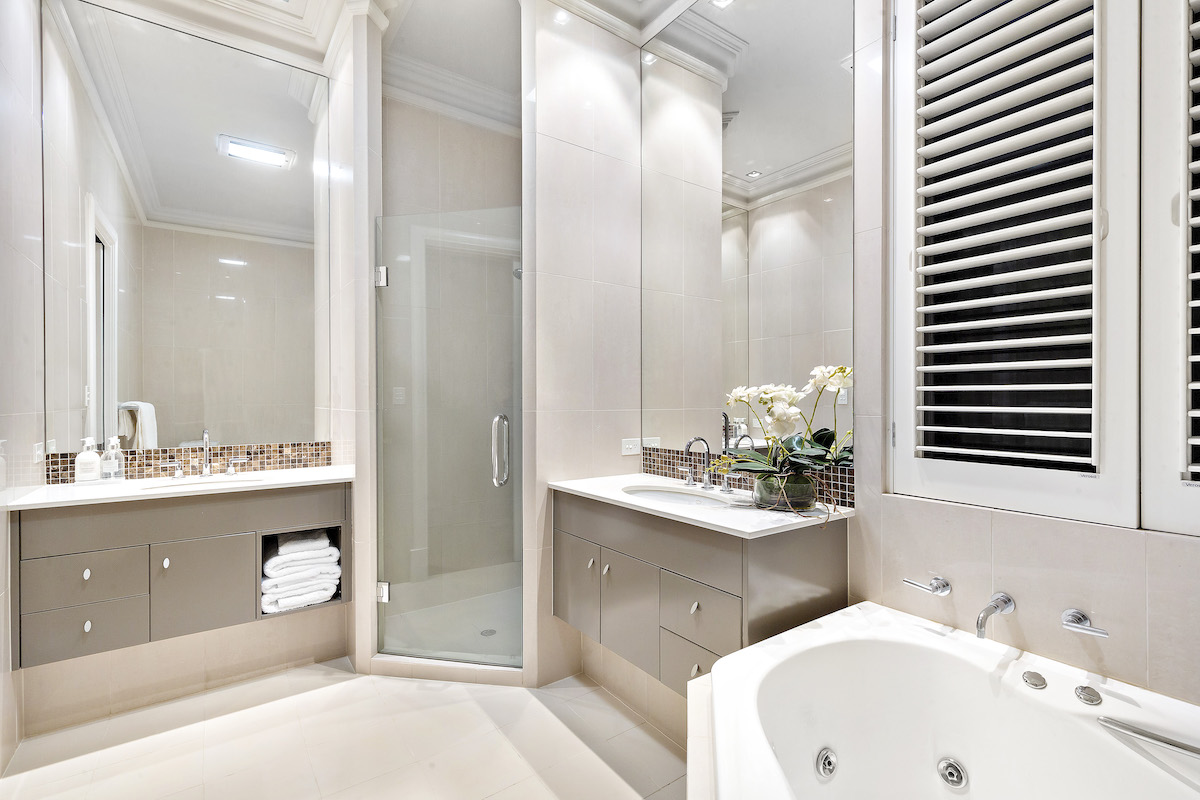 “A big attraction of the home is that it suits different styles of furnishing. You could have really funky modern furniture here, or you could go with an antique style. It’s one of those homes that would look good either way.”

With plenty of wall space for art, Tamra has mostly acquired work by Australian artists, including a pressed metal sculpture by Kangaroo Island’s Deborah Sleeman, which stands against a wall in the living room.

The master en suite has a unique design with dual basins and vanities either side of the shower alcove, providing separate spaces and storage cupboards. The upstairs bathroom also has two vanities and basins.

The upstairs living space, which served as their daughters’ retreat for many years, has striking angular ceilings and a window that looks out to the trees and the city.

“At night you can see the lights of the city from that window, which is so pretty,” Tamra says. 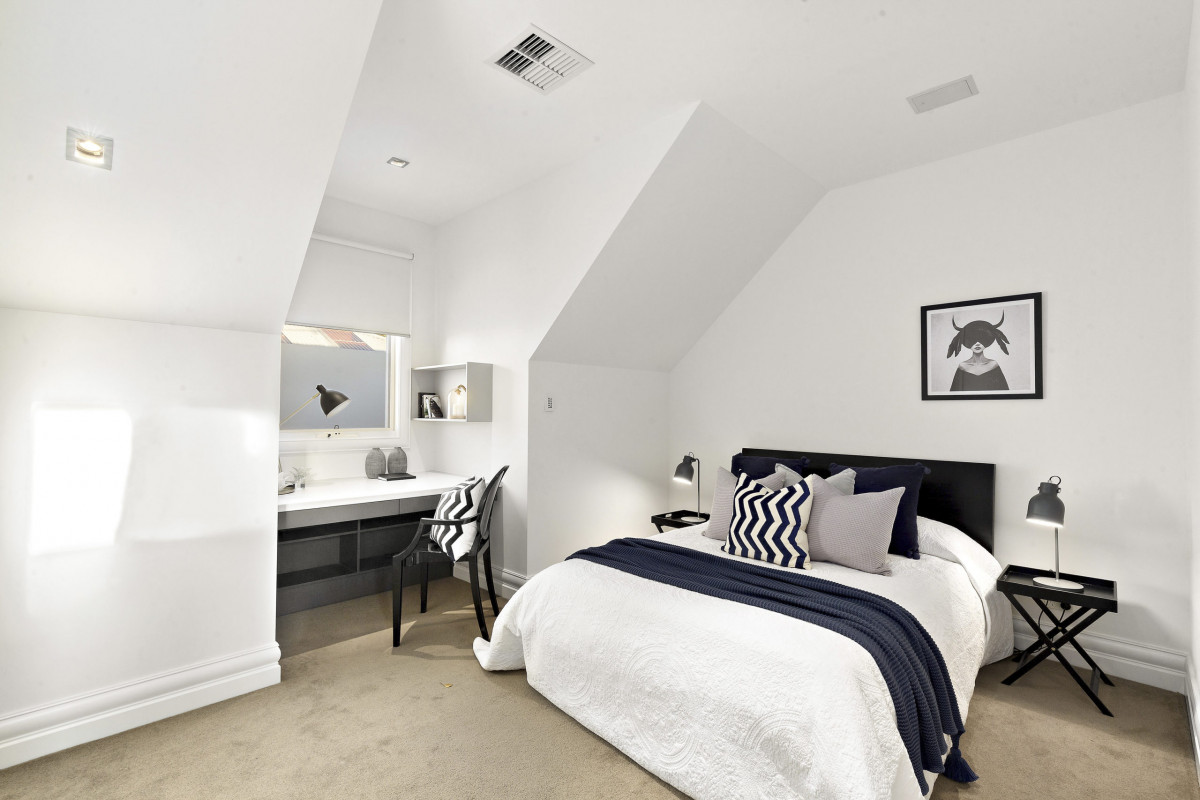 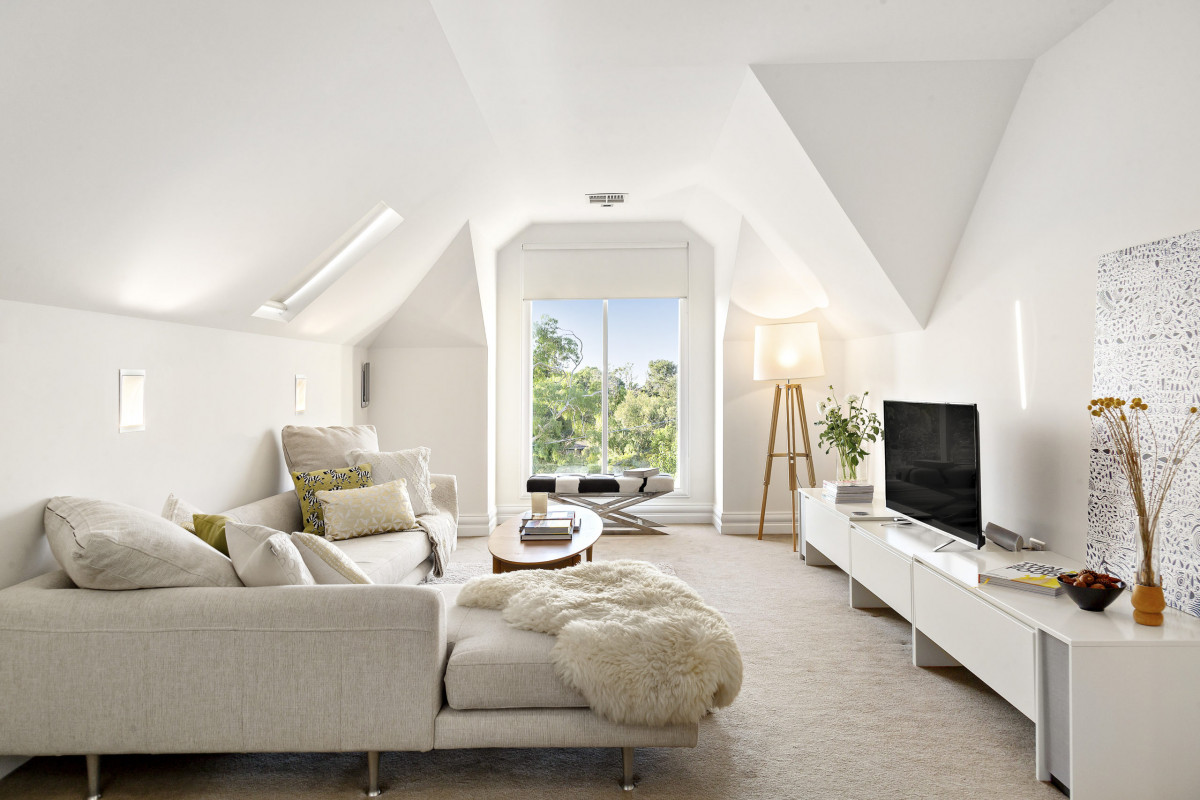 “Upstairs was their complete hub with the two bedrooms, a bathroom with two vanities, and an additional study space. We maximised that space so we could get as much value out of it as we could.”

The downstairs office with extensive built-in cupboards is perfectly equipped as a study but could be reconfigured as an additional bedroom.

The large house has also allowed the couple to accommodate visiting family members from interstate and overseas.

The back garden has the feel of a resort with the pool and pillars, serviced by an outdoor speaker system. “We’ve hosted all of the girls’ birthday parties and engagements here,” Tamra says. 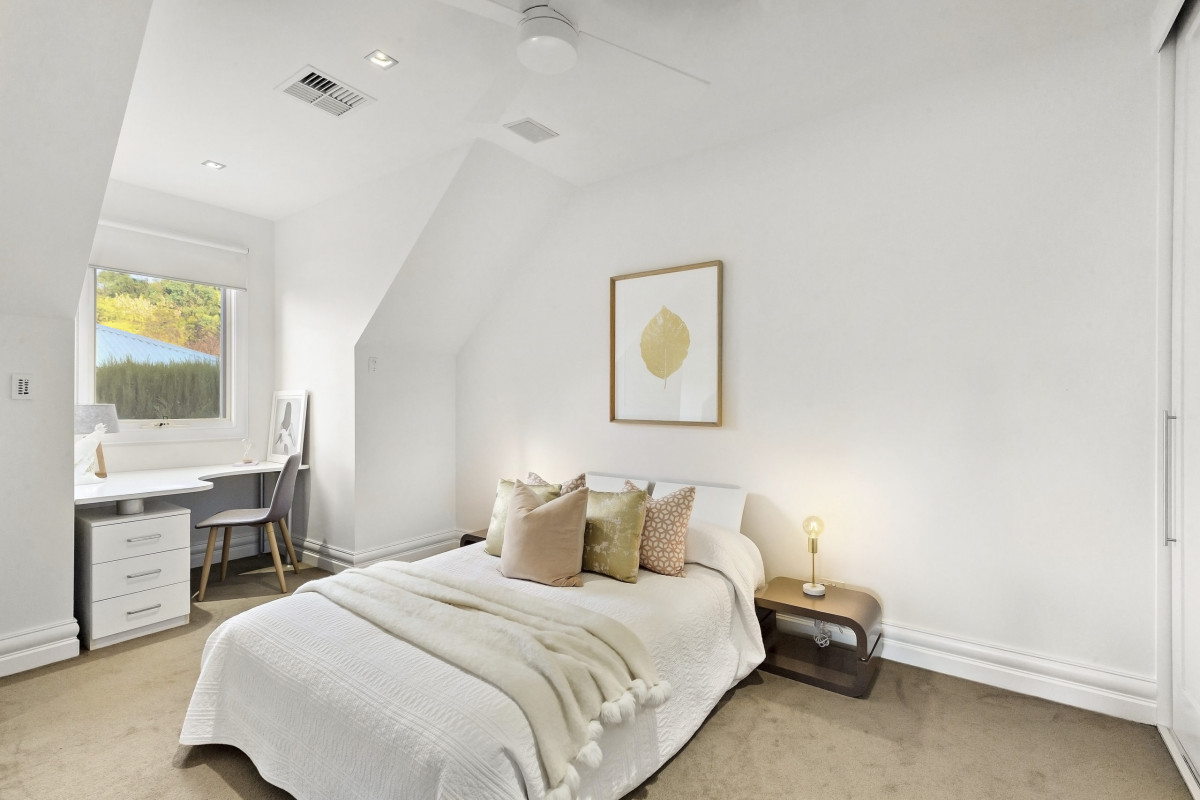 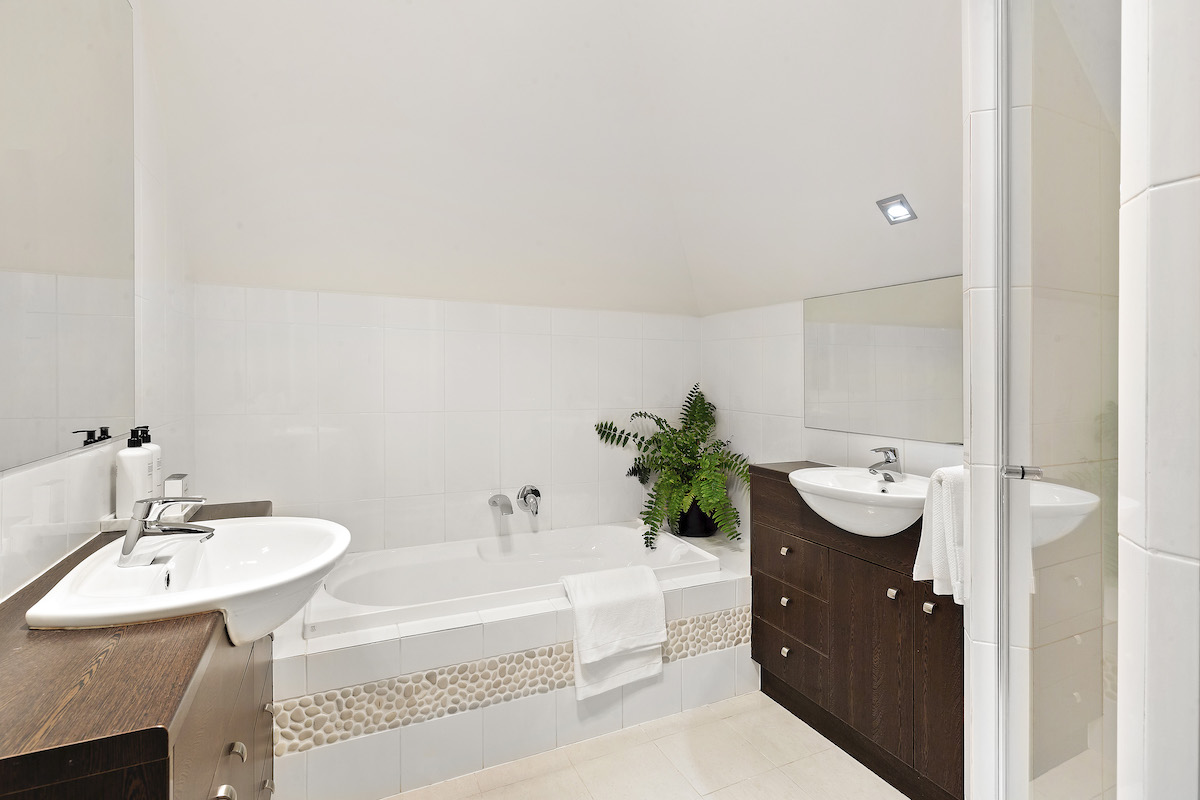 “If you really want to have a party, there’s plenty of noise that can be made if need be. The garden walls are a good thing to keep the noise in.”

During the build, the large walls were craned in and installed right around the property, creating a private back yard oasis. The light tone of the pavers contrasts with the darker walls, and absorbs less heat in summer.

The gardens were created by award-winning landscape designer David Baptiste. Manchurian pears provide a green screening around the perimeter, underplanted with Japanese box and murraya hedges.

The front garden has an attractive tiered design, which complements the facade of the home, and the garden is illuminated by an automated garden lighting system to impressive effect in the evening. 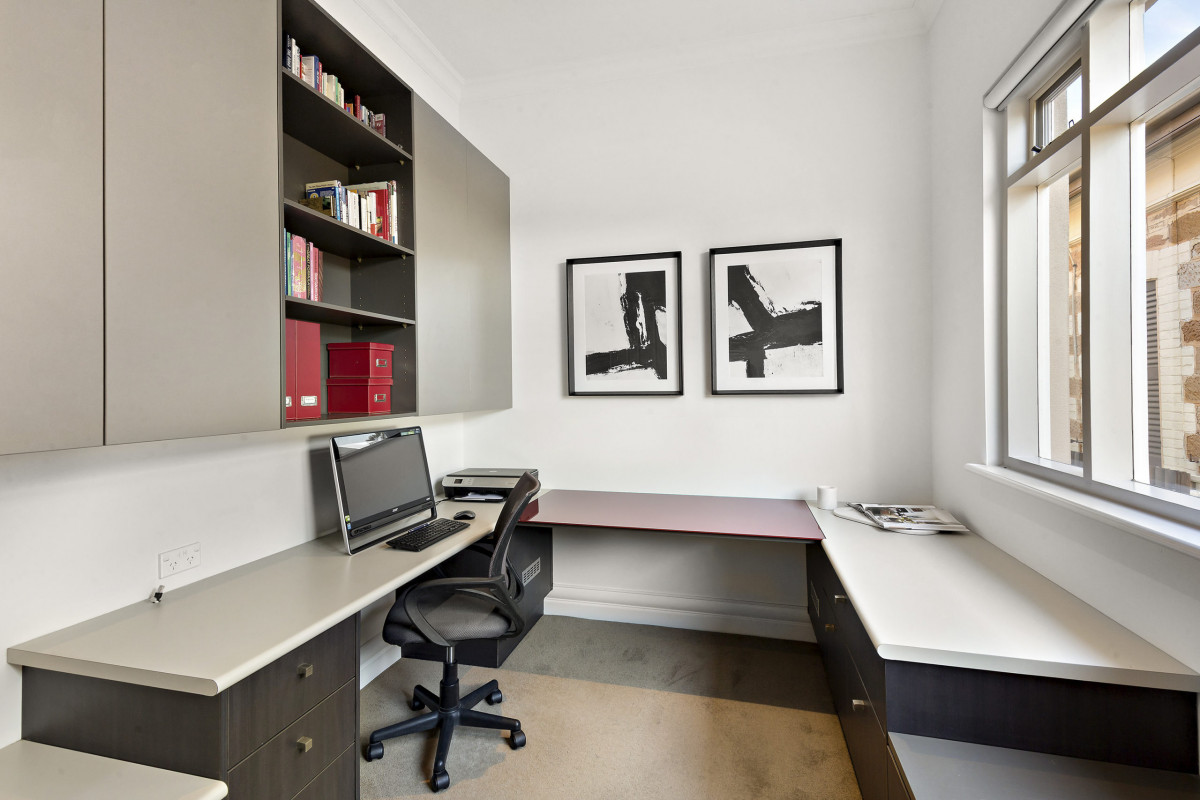 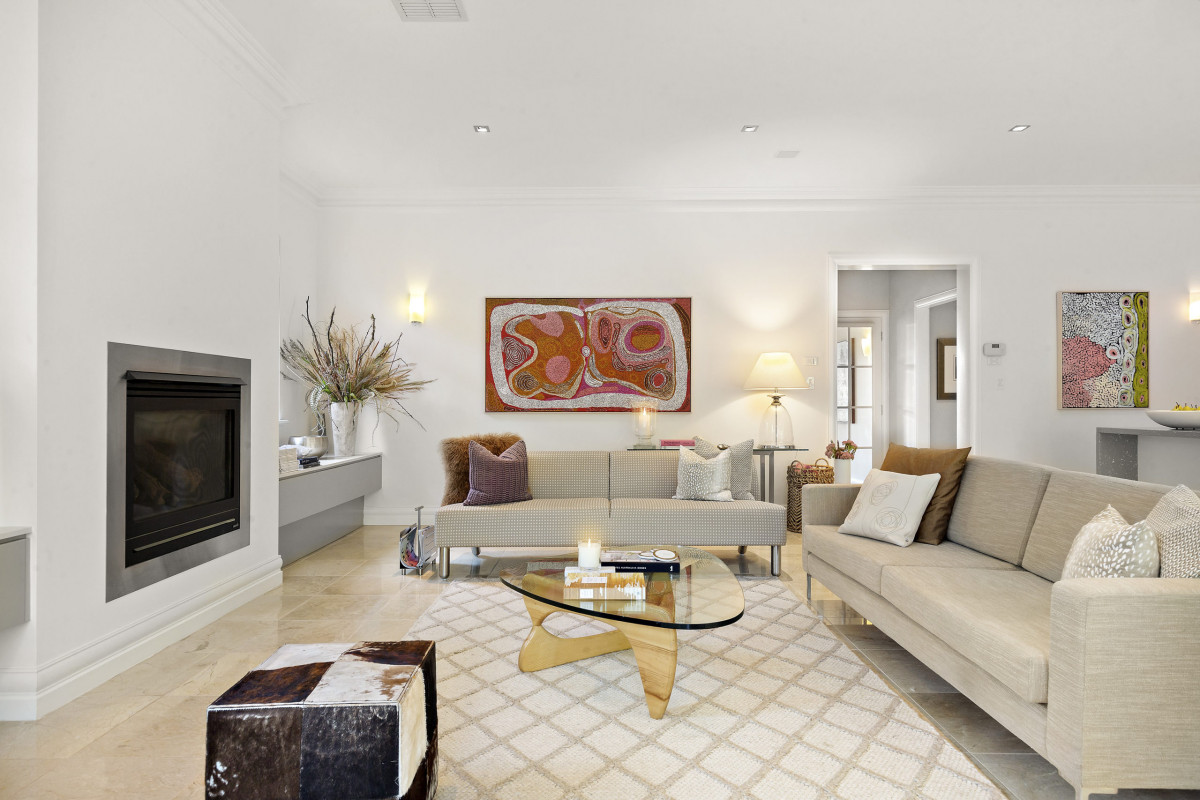 “It’s fairly low maintenance with formal hedging, but it’s enough that I can dabble in some gardening, which I enjoy,” Tamra says.

“Although there are a lot of walls, they are softened by the greenery of the trees. It probably wasn’t as fashionable back then, but it definitely is now and we love that look.”

In the leafy streets of Mitcham, the home is located close to the spectacular nature walks offered by the foothills and the historic Carrick Hill estate.

“I love the lifestyle here, it’s great. We’d love to stay in the area, it’s just a matter of finding something to suit our needs.

“I’ll miss the area and the leafy suburb that it is. I’ll miss the views, and I genuinely will miss the house because we love it as much today as when we created it.”

The sale is being handled by Tim and Megan Thredgold of Toop & Toop. 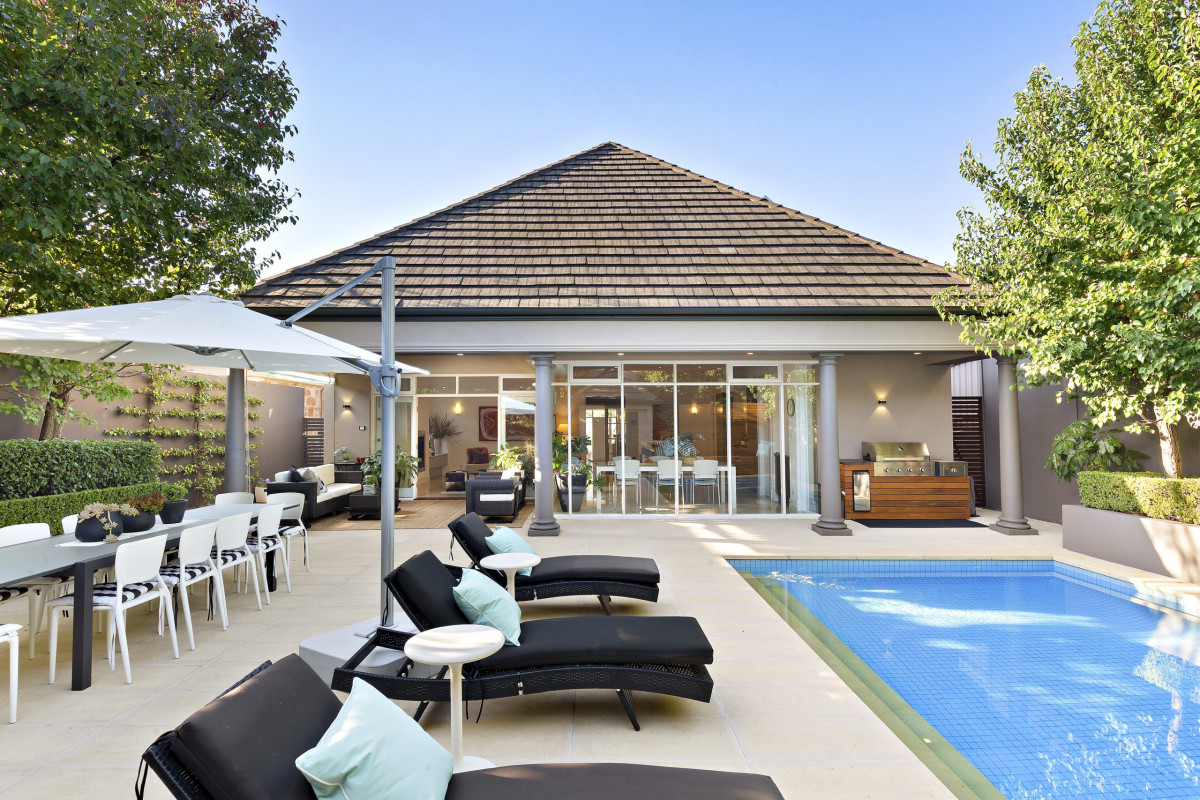