Since the cameras stopped rolling on The Block in 2015, reality television stars Tim and Anastasia Ielasi created their dream family home at Woodville with wow factor that would silence even the toughest critics.

The past several years have been a whirlwind for Tim and Anastasia Ielasi and it all started when the couple purchased a very tired-looking bungalow at Woodville in 2013.

They were attracted to the neglected property mostly for its garage where they could work on a project car — a 1968 American coupe.

“The house had been a rental for about 30 years. It was the worst house in one of the best streets of Woodville; a very modest little house,” says Anastasia. “You couldn’t even see the house; it was covered up by trees and bushes.”

When they got the keys to 24 Aberfeldy Avenue, the couple took a few days off work to make the 1930s home more liveable. 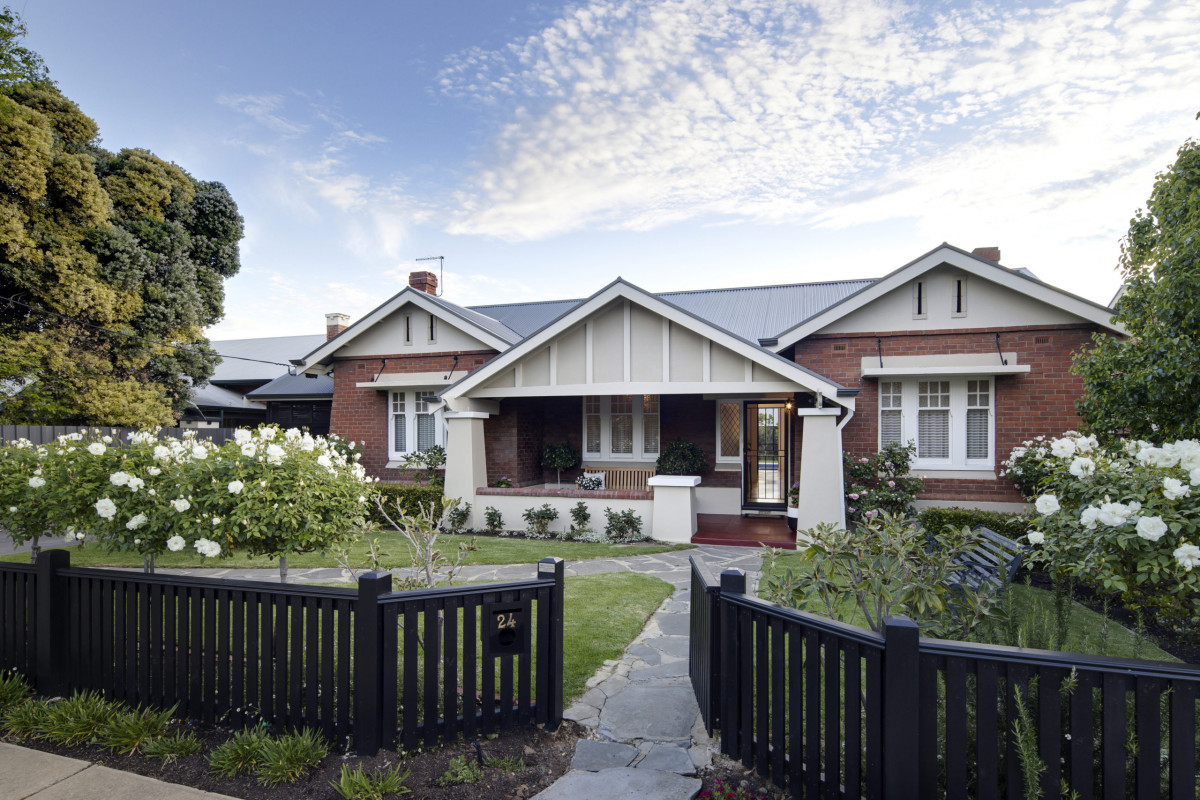 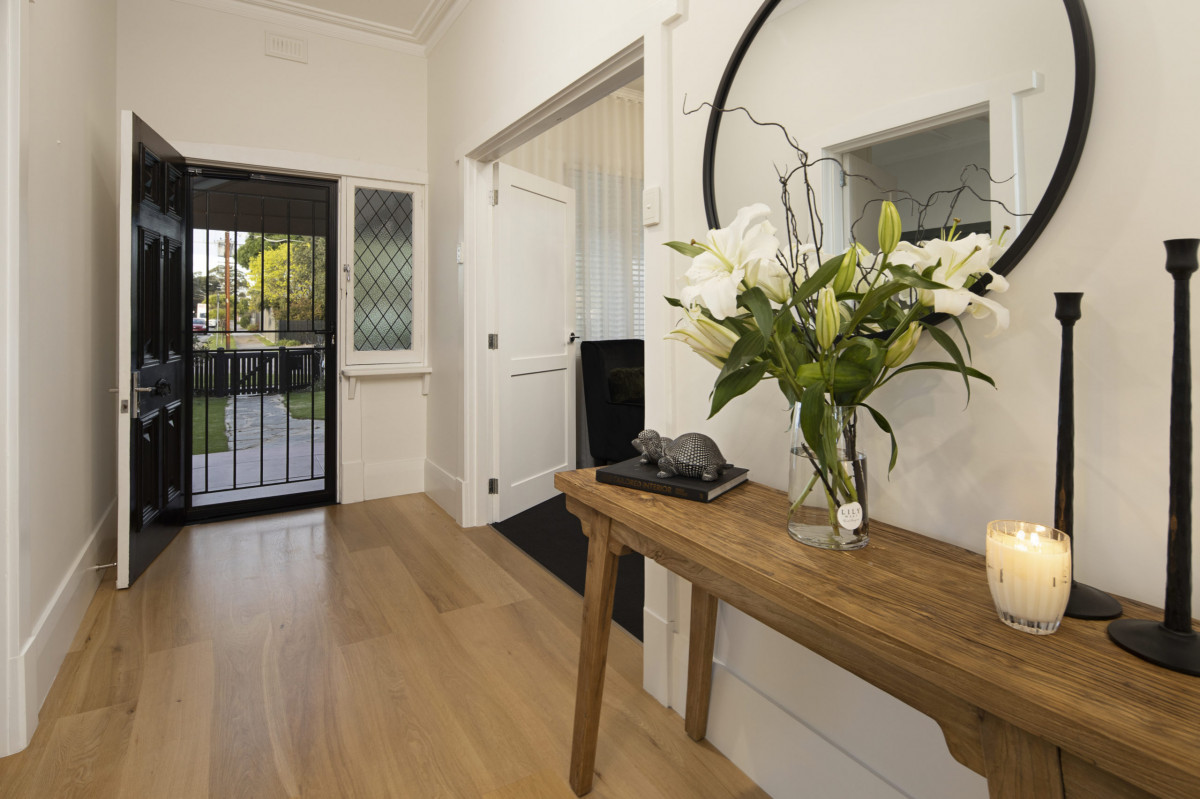 “Neighbours would often see us working in the front yard and say, ‘you guys should go on The Block’. We had the renovating bug and I thought maybe we should do it,” she says.

“I kept asking Tim, he said no at first, but we eventually agreed to give it a shot and within about nine months that we’d been renovating, we ended up on the show.”

The couple returned home from filming with $750,000 and decided to sink their efforts into transforming the bungalow into their forever home — much like their rusted coupe which is now a showpiece. 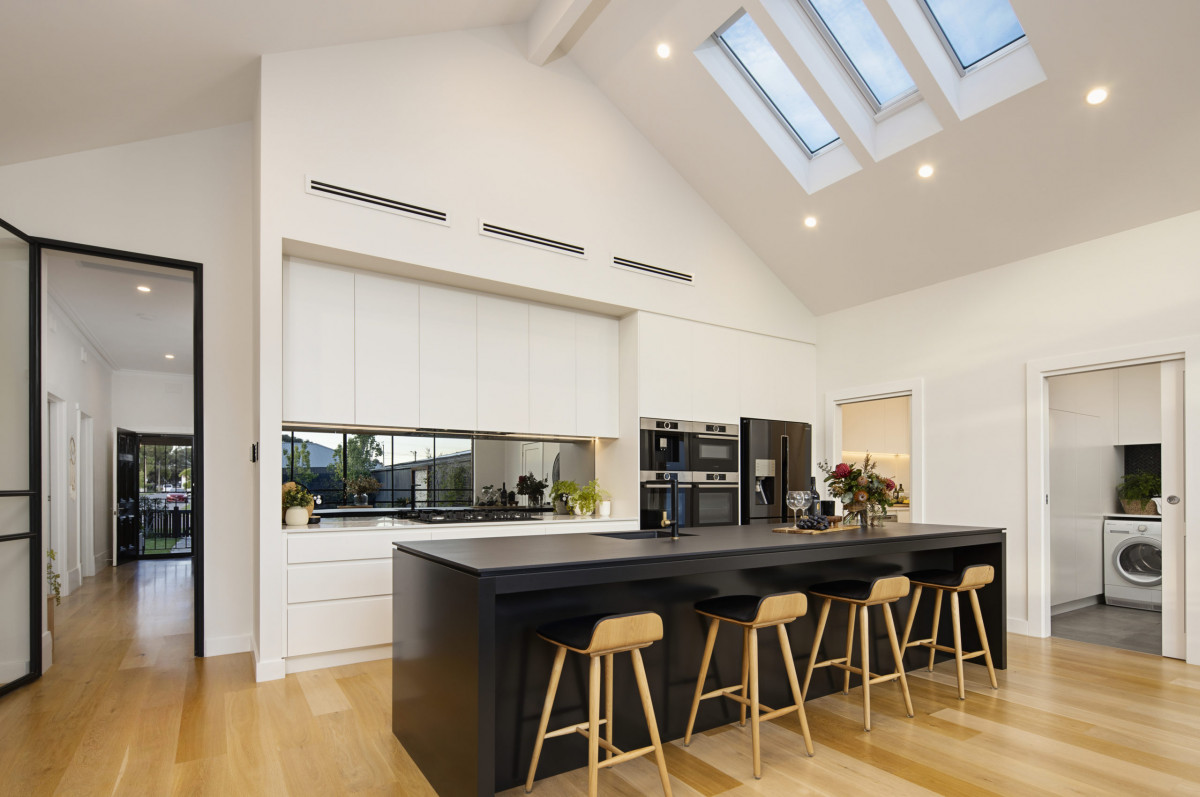 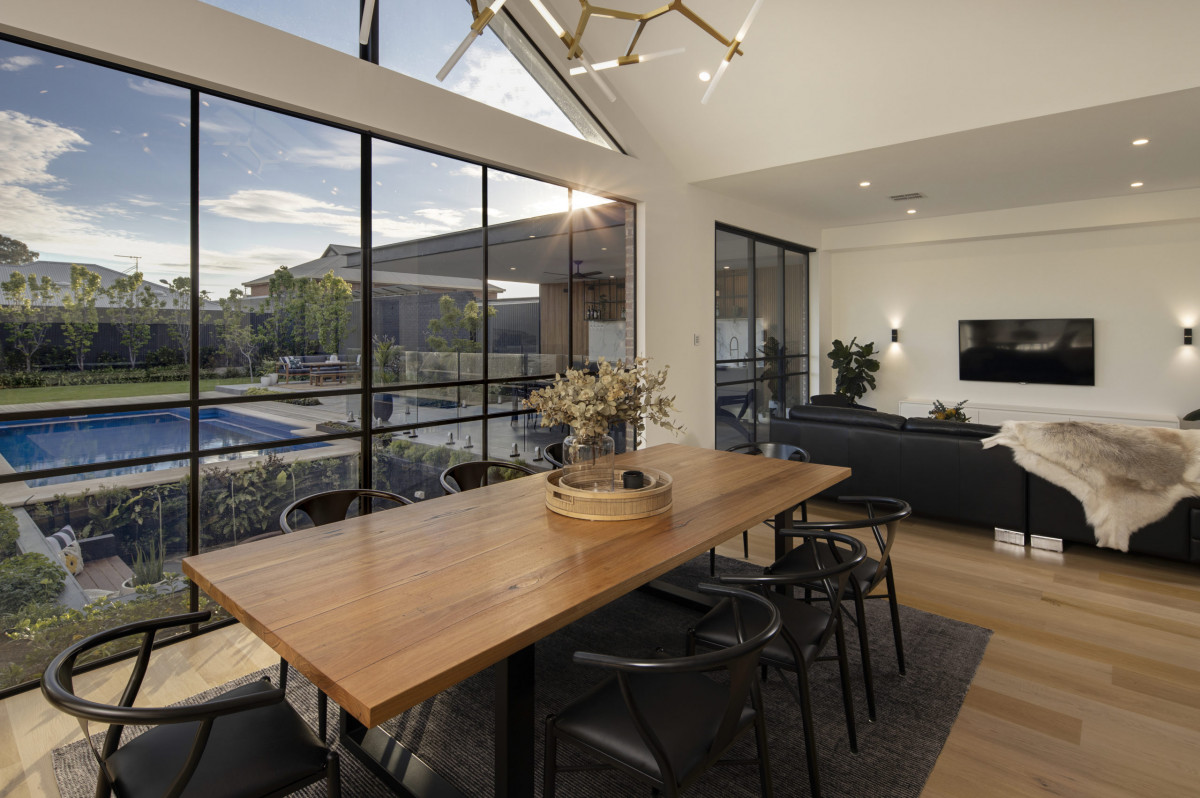 The couple has simultaneously created their business T&A Construct, which they run out of their home, using the property as a showpiece for clients.

The business has expanded so much that the couple is looking to build a new home near the beach, with integrated offices and working facilities.

“It’s a bit heartbreaking to sell this house because we love it so much,” says Anastasia.

“I absolutely love our Cathedral at the back — it’s almost five metres high. So not only do you have three-metre ceilings throughout the house but then you’ve got that extra grandeur at the rear.

“The kitchen is one of my favourite areas too, with the large island and Dekton surfaces, so we can get food out of the oven and put it straight onto the stone benchtop knowing that it’s heat and scratch-resistant. That’s also where everyone tends to congregate.” 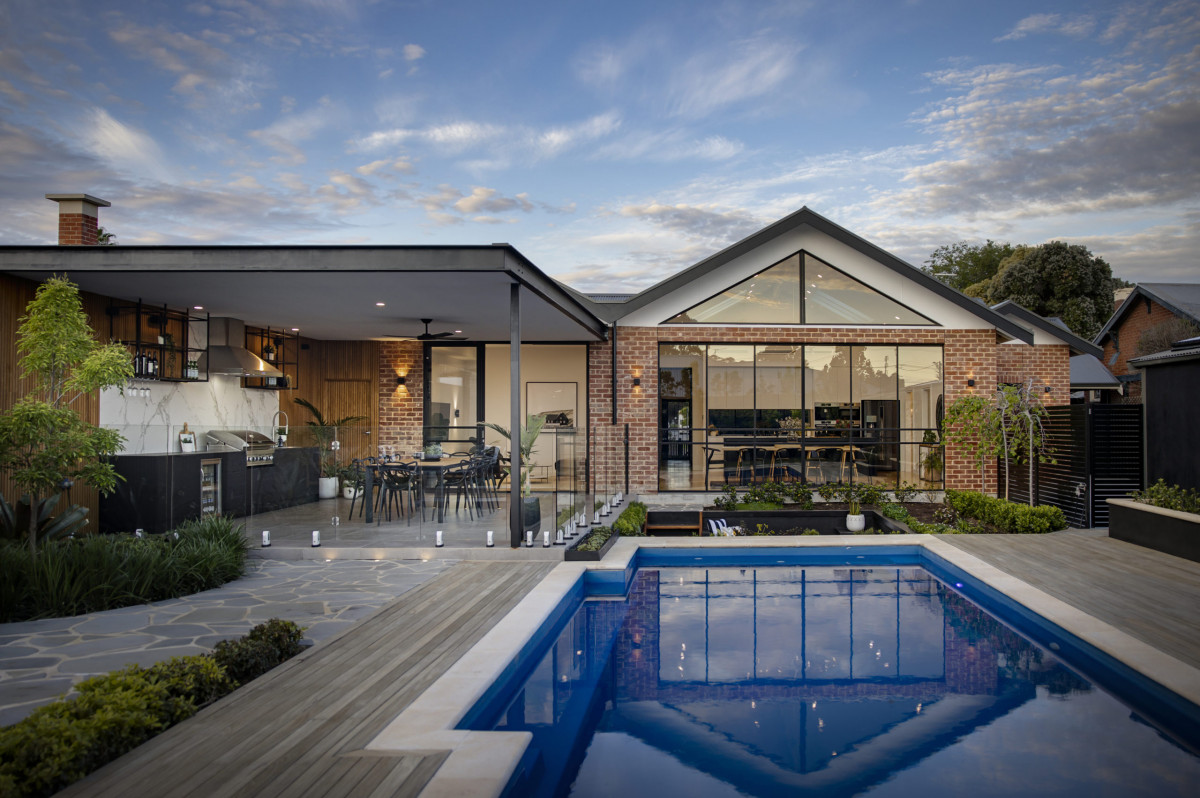 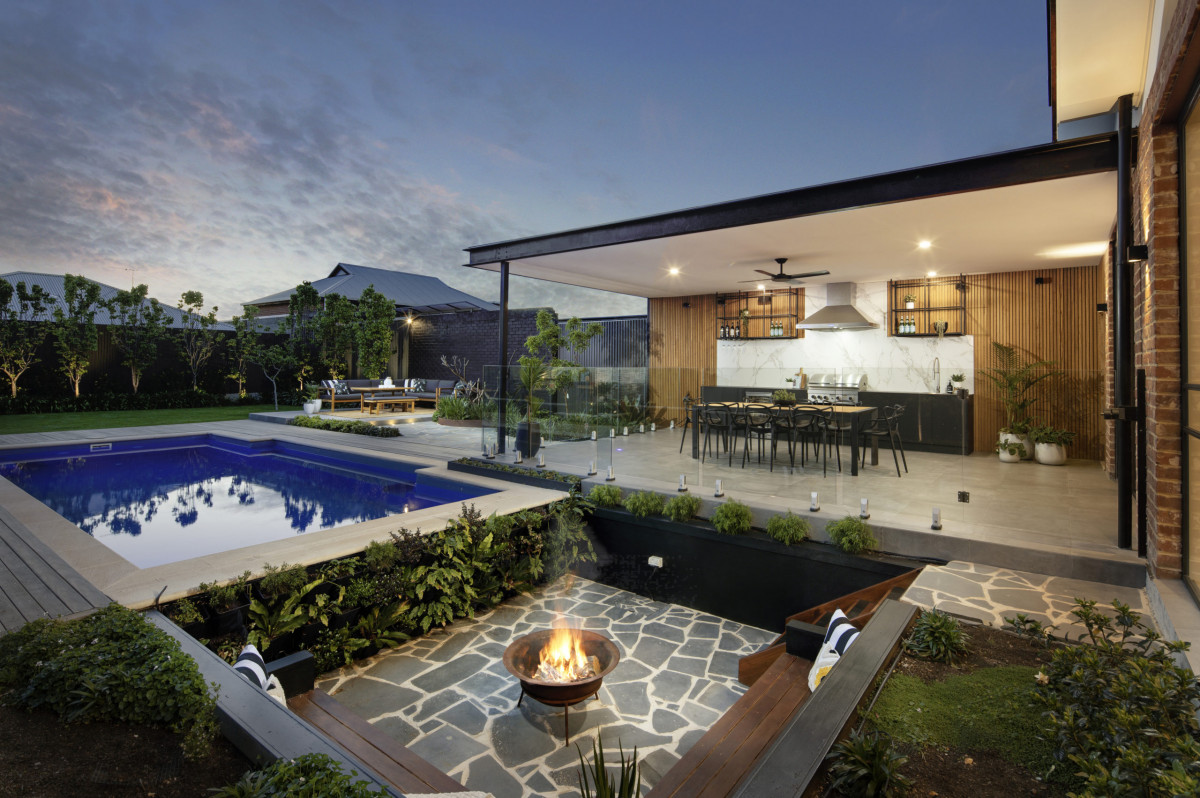 Anastasia says although reality television was gruelling and often portrayed a skewed account of events, the experience was life-changing.

“They film you for 16 hours a day and then you get cut into a one-hour episode. They didn’t paint us in the best light,” she says.

“But at the end of the day, we walked away with $750,000. I also found it to be a quick crash course in interior design. We got the renovating bug and a taste of a pressure-cooker renovation.

“Most people would say that a bathroom renovation should take six to eight weeks. On The Block we were doing one in six days, working 24 hours a day. Sometimes you don’t sleep, and most of the time you only get four or five hours. After three months, you’re exhausted.” 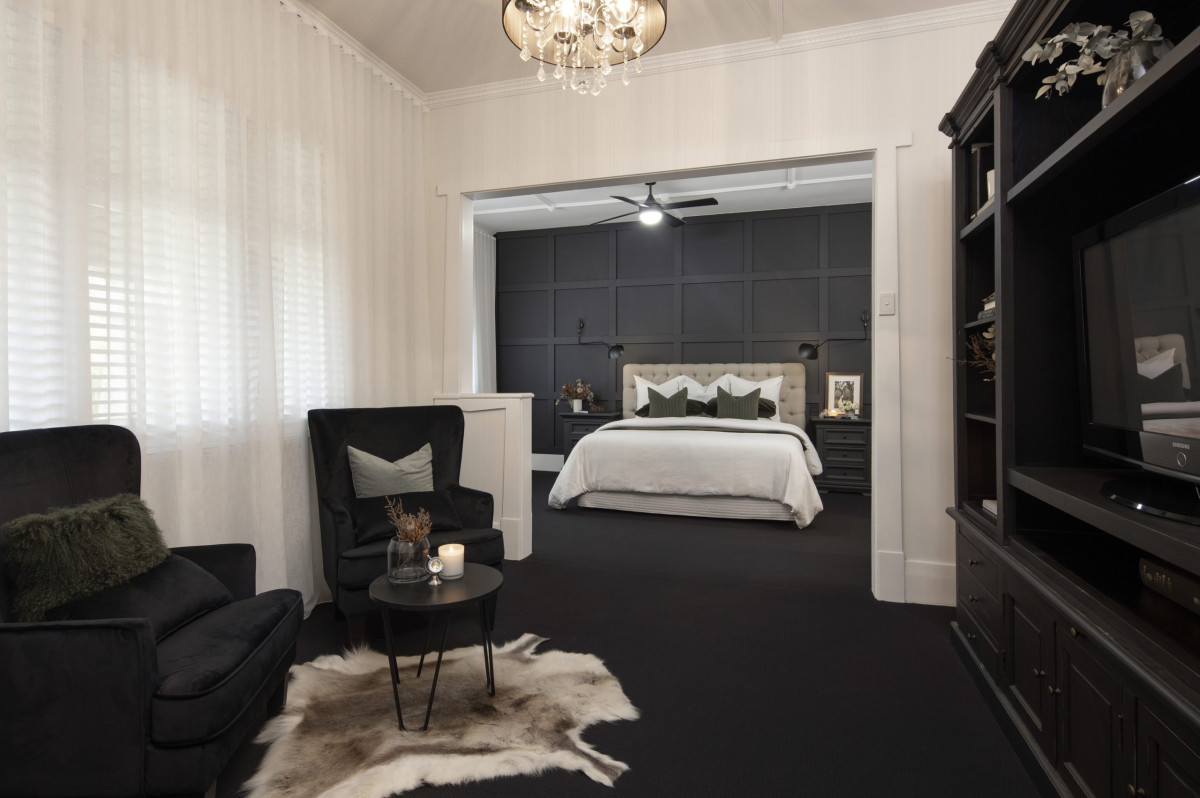 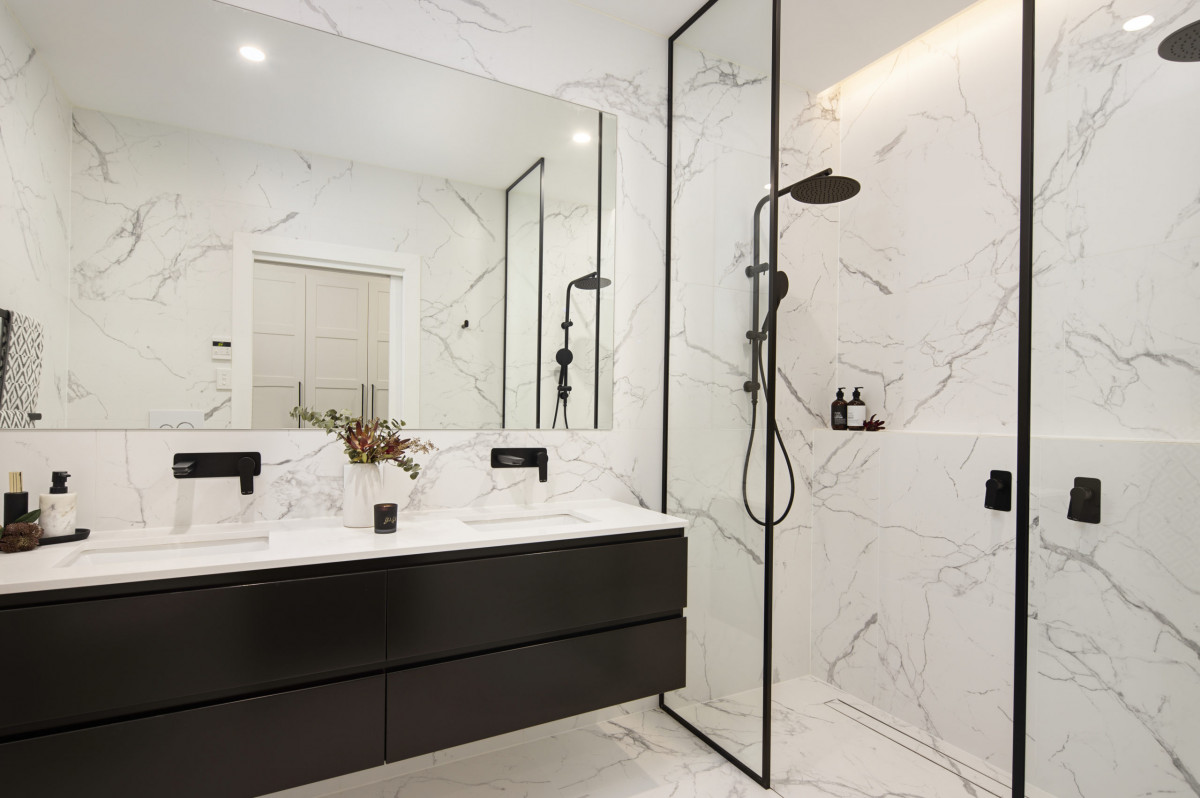 The couple has since shied away from fame to focus on what they believe to be their calling in the building industry.

“Building and renovating is what we loved doing even before we joined the show,” says Anastasia.

The back yard is an entertainer’s dream and has been a favourite of the couple’s blended family for pool parties and gatherings. A sublime undercover barbecue area is punctuated with spotted gum timber panelling, with a glamorous Dekton benchtop and splashback creating a stunning outdoor kitchen.

There’s also plenty of grass for the family’s dogs to run around. 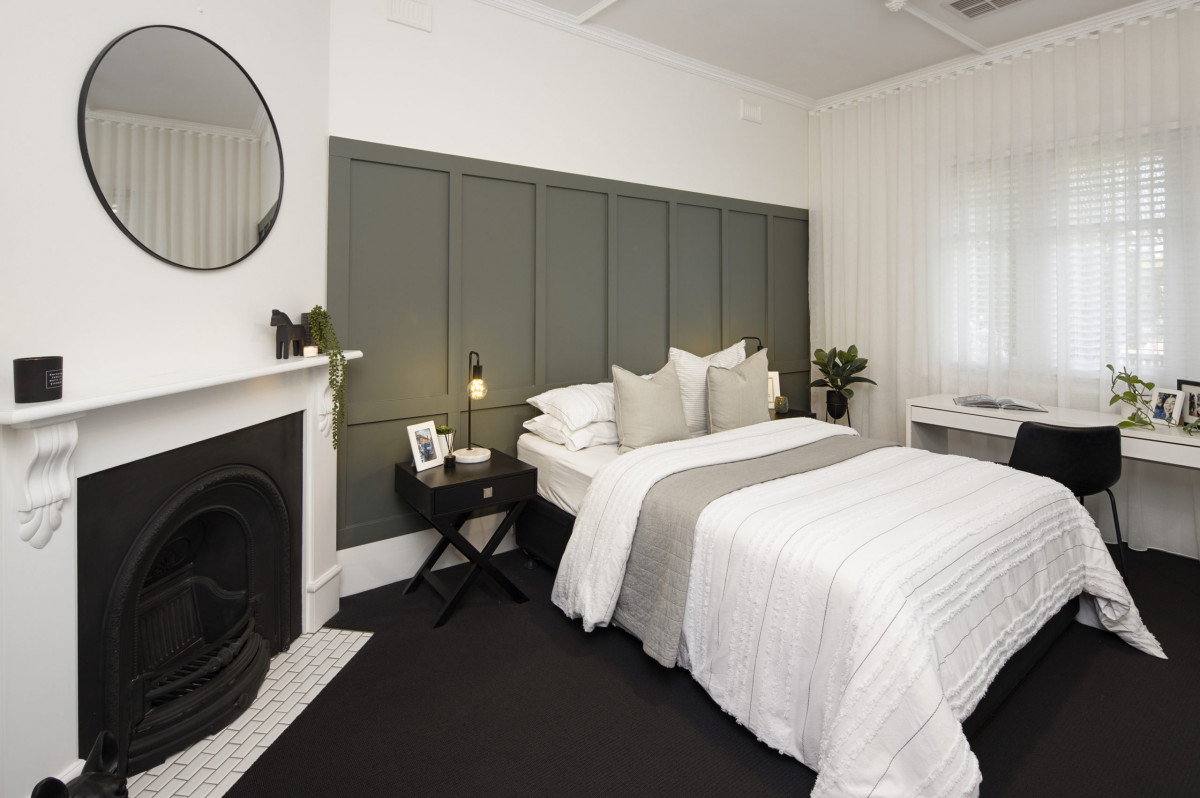 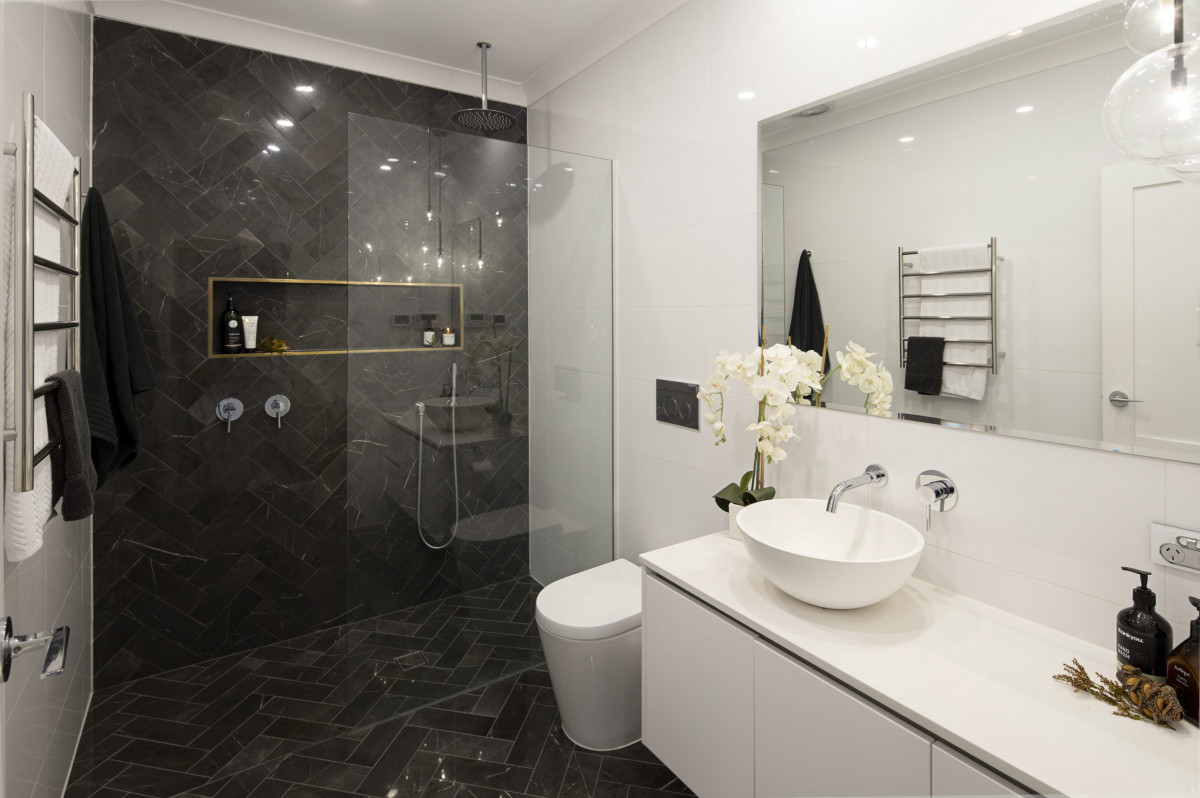 “The feature of the house which ties everything together is the colour palettes of black, white, and timber with touches a gold colour throughout the house — whether it be a chandelier or a tap,” Anastasia says.

“I’ll miss the street and neighbourhood, it’s a truly unique little area. Everyone is so friendly and they all look out for one another.

“We’re surrounded by Tudors and bungalows and it’s just a beautiful little hidden pocket of Woodville.”

The sale is being handled by Andrew Kuhlmann of Klemich Real Estate. 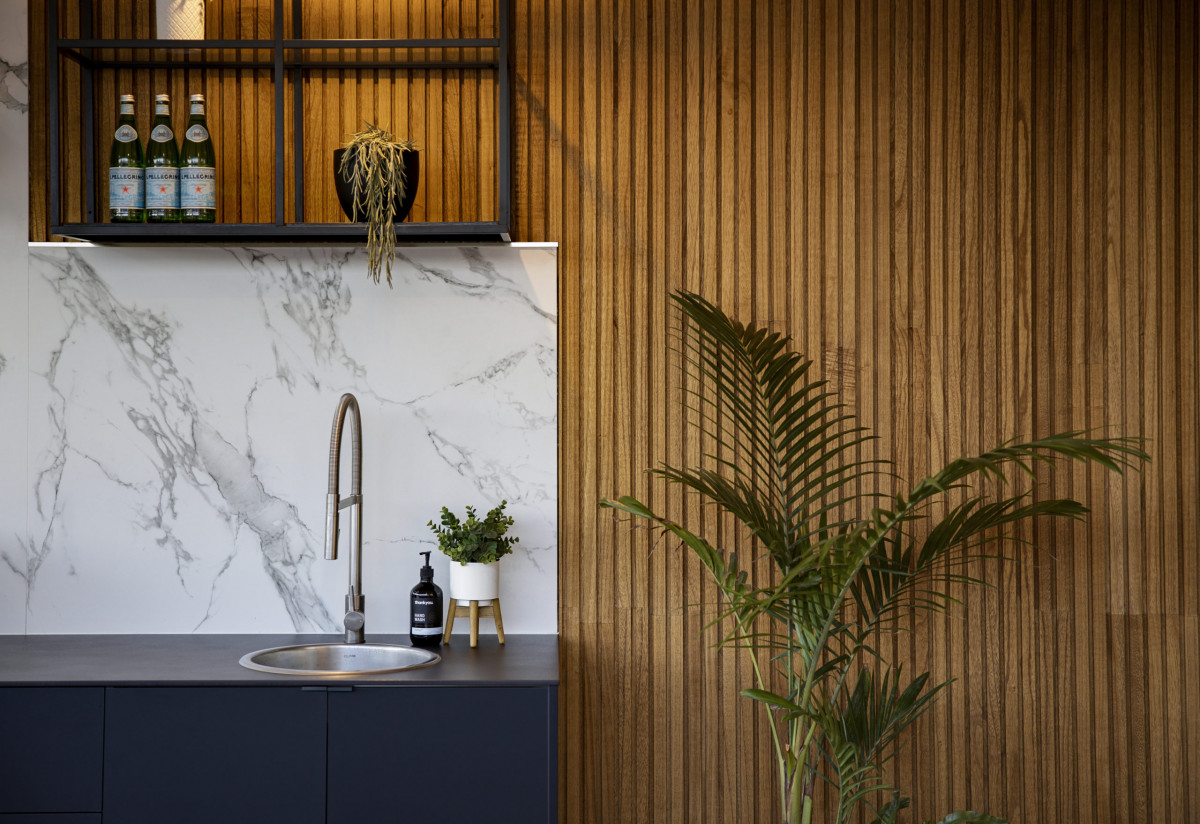 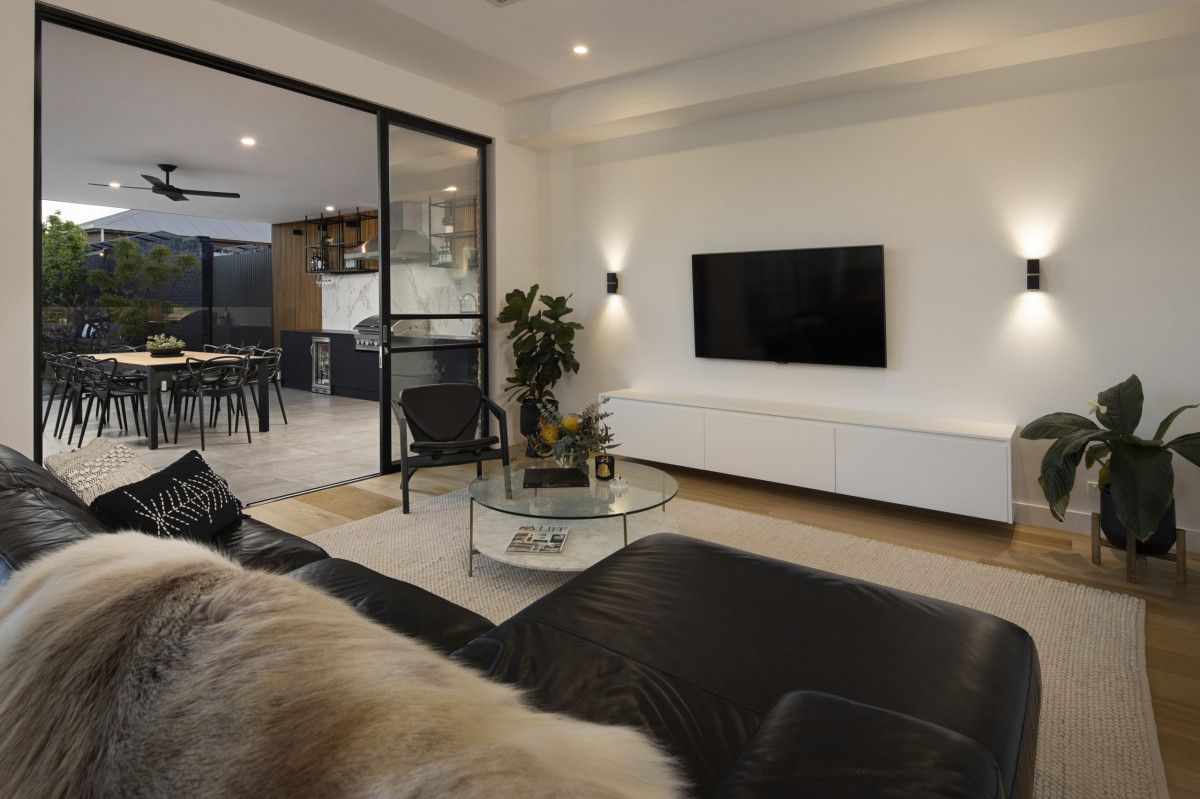 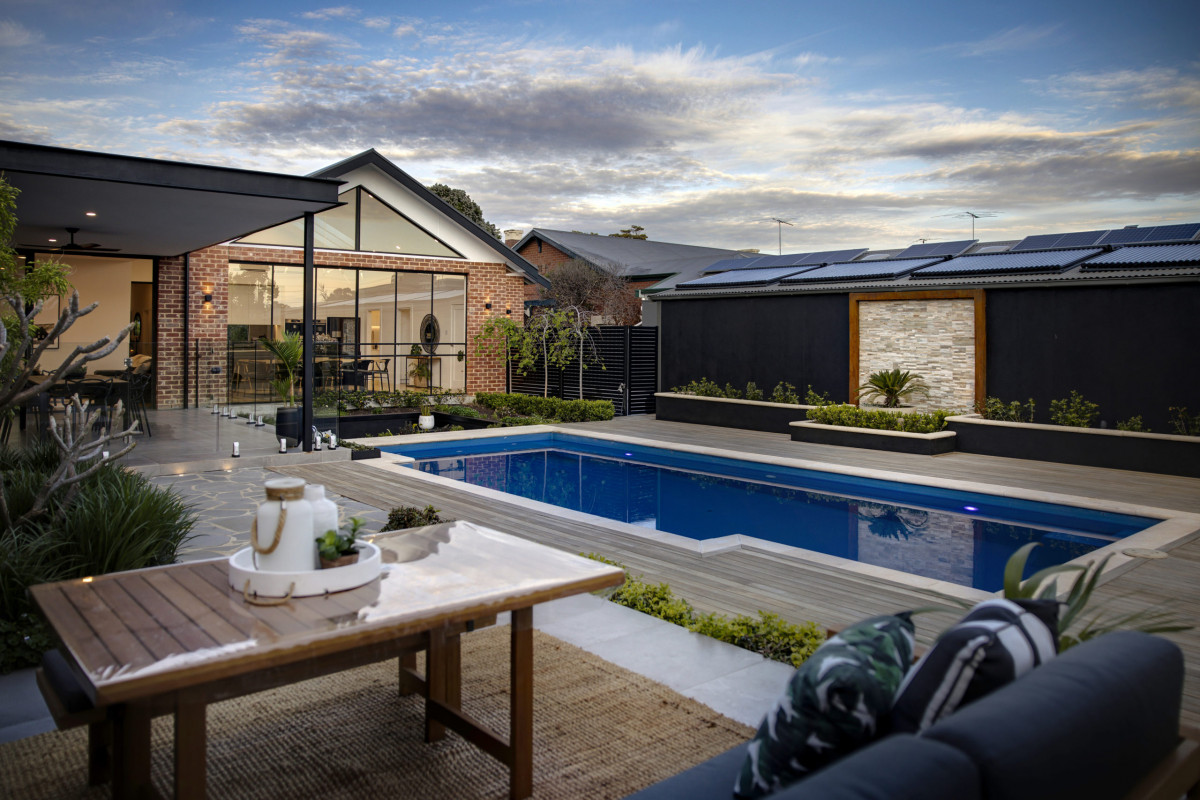