The spectacular new Maserati MC20 may be beyond the financial reach of most of us, but can you put a price on perfection?

You may never have thought about it before, but we mere mortals have a lot to thank the very rich for.

We all know that minimising tax is an important consideration for them, but there are some taxes they simply can’t avoid.

Take the spectacular Giallo Genio (that’s the shade of yellow, for those of you not fluent in Italian) Maserati MC20 mid-engine, carbon-fibre, two-seater supercar pictured here.

According to the price list I was handed along with the keys, the retail price is $467,000 but, to that already lofty sum, a buyer needs to factor in a few taxes, including the $2639 luxury car tax and $18,620 stamp duty.

So, when a very fortunate buyer orders one of the most engaging new cars currently available, he or she also fattens government coffers.

In fact, the LCT on this particular car will be substantially more than $2639, because, like most supercars, it comes with a number of optional extras. Take the exterior Carbon Pack, for example. For you, sir (or madam), a snip at $92,806.

Most people would never spend that much on a car, let alone an option on a car! And the $8721 optional suspension lifter (for negotiating speed bumps and gutters) is almost obligatory. The car we are driving is $640,562, as tested.

And now that we have the tacky and impertinent matter of money out of the way, just how much of a car do you get? In short, plenty!

It differs from the MC12 by not using a Ferrari engine but a Maserati-developed 3.0-litre twin-turbo V6, comfortably rocketing the car from standstill to 100km/h in 2.9 seconds, or 200km/h in 8.8 seconds and on to a top speed beyond 325km/h.

If you are tempted to ask where you can use such performance, you’re probably not the kind of buyer the MC20 is aimed at.

Maserati plans to build around 1500 MC20s a year, with just 30 coming to Australia.

Development and tuning of the MC20 in Italy was conducted on challenging Apennine roads.

Coping with city and suburban traffic to escape the tyranny of dozy drivers, manic delivery vans and lumbering trucks brought to mind a comment made to one of our more infamous tennis stars: If he wanted to avoid endless recognition and scrutiny, perhaps he should drive something less attention-seeking than a bright yellow supercar.

Once on the kind of roads this car was made for (although it was obviously never intended to suffer our broken edges and unpredictable surface irregularities) the true character of the MC20 revealed itself.

Flicking the paddles up and down through the eight-speed auto (the same as used in the current Chevrolet Corvette C8) is almost superfluous because you can take a corner in first gear, or trickle through in fourth, with equal equanimity.

The interior is almost deliberately austere but before you experience it, you have to go through the theatre of opening the butterfly door, first ensuring there’s sufficient headroom, and you haven’t parked too close to a wall or other vehicle.

The view through the windscreen is framed by the twin peaks of the front wings, while the gaping air intakes for the engine just inches behind your head are always visible in the mirrors.

Speaking of mirrors, the interior rear vision mirror is digital. It’s slightly disconcerting because, unlike a normal mirror, this one requires you to quickly adjust your focus when you glance at it, and re-adjust when you look forward again.

A readout on the dashboard lets you know when tyres and engine reach operating temperature (and warn you if they get too hot), but that is unlikely to happen on public roads.

Even so, opening the engine cover (with cut-outs that create a Maserati trident) releases a wave of hot air after a spirited drive. 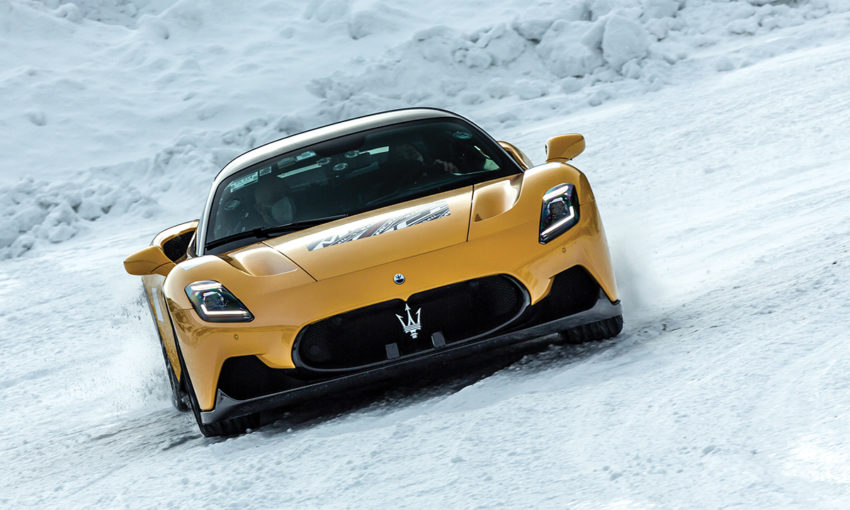 Maserati has had its ups and downs over the years, but with the MC20, it’s right back on song. It’s a car you walk around to appreciate its sublime proportions before getting in and driving off.

And it makes an interesting alternative to the usual supercars such as Porsche, Aston Martin, Ferrari, Lamborghini and the rest. In fact, the MC20 is a lesson in getting it right.

This article first appeared in the April 2022 issue of SALIFE magazine.