A day at the track reveals why more and more people are joining one of the motoring world’s most exclusive clubs. 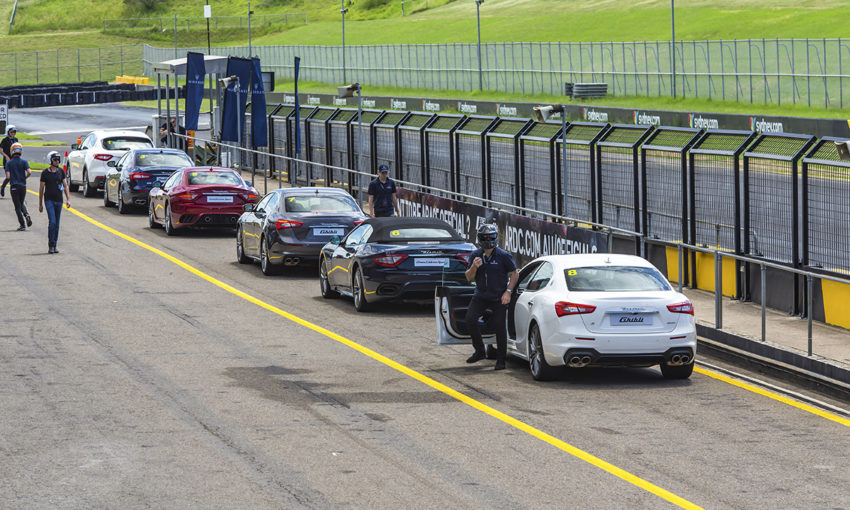 Modern cars are amazingly capable machines. Most drivers will never explore the limits of their cars, and trying to do so on public roads is foolhardy. Even the most humble modern car has performance, braking and handling that only a few years ago were the exclusive preserve of supercars.

Taking it to another level altogether are modern high-performance cars. If you are fortunate enough to be able to afford one, those limits are even further outside the constraints imposed by public roads.

The only sensible place to explore the upper boundaries of supercar performance is on a race track and that’s not something most people want to organise for themselves. Nor do they want to put their valuable cars at risk.

More and more supercar companies are offering drive day experiences for lucky owners (and, not surprisingly, aspiring owners), but the experience doesn’t come cheap. One notable exception is Maserati, which invites people to these exclusive events, and doesn’t charge them for the privilege.

Maserati’s Ultimate Drive Day Experience is conducted at racetracks across the country and abroad. Currently, the event is run twice a year at the Phillip Island Grand Prix Circuit in Victoria and Sydney’s Motor Sport Park at Eastern Creek. Even more exotically, the event is also run at the Misano World Circuit, near the Adriatic Coast in Italy.

Increasingly, car companies are recognising that their product is not just a brand but a lifestyle choice; people are looking for a lot more than simple transport from A to B.

The Maserati Ultimate Drive Day Experience panders to the ego in all of us. It starts with the welcome into Maserati’s luxuriously appointed hospitality garage at the circuit. Each drive day is limited to 24 participants, separated into three groups of eight. Overseen by racing driver Renato Loberto, supported by a team of experienced drivers who have competed in everything from the Bathurst 12-Hour to NASCAR, the drive day takes each group through a series of driving disciplines, from cornering and braking, skid pan drifting, off-road driving and, finally, fast laps around the 4.5-kilometre circuit.

While it is a lot of fun, it is also very much a learning experience. As instructor Ben Porter (who the weekend before had been piloting a Lamborghini Huracan around the Mount Panorama race circuit) says, “There’s a lot of repetition because far too many drivers continue to make basic and silly mistakes.”

Driving powerful and fast cars on a race circuit has a wonderful way of focusing the attention. The skid pan demonstrates just how traction control works, something many drivers never get to experience on the open road. With ESP switched on, driving around a tight circle of cones on a soaked concrete surface doesn’t present too many challenges, but once the switch is moved to Sport mode (partly disabling traction control), things get much more exciting as the rear end breaks away. The next step, with ESP switched completely off, shows just how clever the system is, since controlling the car becomes almost impossible for us (although one of the instructors demonstrates numerous fully controlled power slides).

Then it’s off to another part of the track to learn some cornering skills. Approaching a more-than-180-degree off-camber corner at racing speeds is a new experience for many participants. The instructors point out how the balance of the car changes, how to set the car up on entry and how to take the best line for the fastest and smoothest exit.

There are few surprises because a car like the Maserati is expected to behave like the thoroughbred it is. But when we swap into the new Levante 350 SUV, eyebrows definitely rise. On a dusty, powdery off-road track, the Levante simply goes where it’s pointed, even though it still wears its low profile, high performance road tyres. The tyre pressures haven’t even been lowered for added traction. Even when we deliberately stop halfway up a steep hill, the Levante moves off without any wheelspin.

When we later chat with Adelaide Maserati dealer Solitaire’s Andy Madgwick, he admits, “I really like Maserati owners. They’re not in-your-face people. Buying a Maserati brings with it all the benefits of being a member of an exclusive club.” After all, Maserati’s entire yearly production of all models will be less than the number of Cayenne SUVs produced in one year by rival Porsche.

Andy has a personal relationship with Maserati owners. They regularly drop by the showroom for a coffee and a chat. And the Maserati showroom has become a de facto owners’ club, with regular social drives, meals at local wineries over a shared platter, invitations to functions at the Adelaide Oval or attending Australian Chamber Orchestra performances.

Maserati ownership will never be cheap, but it brings with it some very special privileges. Maserati Australia CEO Glen Sealey sums up the brand by explaining, “Maserati is not a hard core sportscar; it’s all about getting there in style.” And there’s nothing more stylish than exploring the limits of these elegant cars than by taking them out for a day on a race track.

Subscribe now
Subscribe Today! Subscribe to South Australia's biggest-selling magazine, showcasing the best of Adelaide and South Australia. From only $9 per issue
including free delivery to your door.
Share —
More from SALIFE
Premium Property

FEATURE LISTING: ‘This house is like a beautiful woman’

Amanda and Salvatore Pepe are selling their stunning art deco home, which has been the perfect setting for family life for these passionate cooks and entertainers.