All railroads lead to Peterborough

The rail era is a beloved chapter in South Australian history that once revolved around a bustling Mid North steam town and the many hard-working people who called it home. 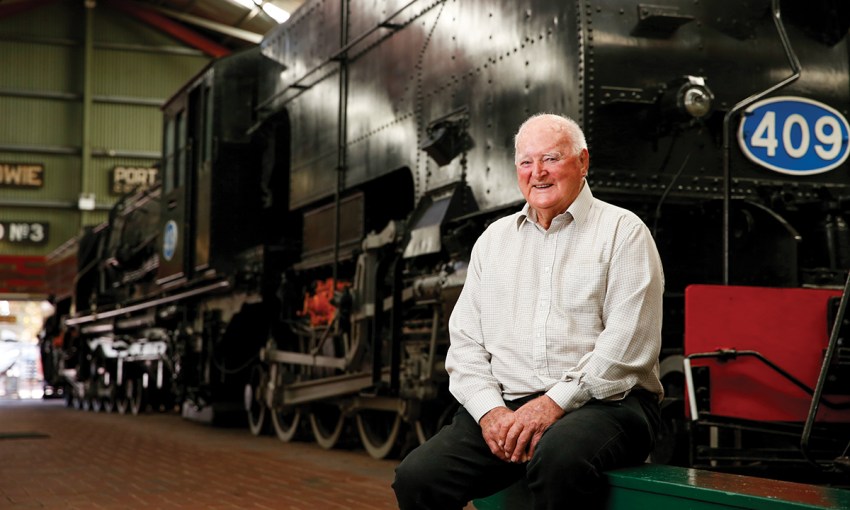 The piercing steam whistle could be heard for miles. Before the sun was up each day, Peterborough’s boiler house attendant sounded the 6am whistle that screamed like a banshee, ringing out across the town’s homes, rail yards and surrounding farmland: an alarm clock for the entire town of more than 5000 people.

“You certainly knew when it went off – you could hear it from miles away,” says born and bred Peterborough resident and retired railway worker Doug Evans.

The train-like whistle gave hundreds of South Australian Railways employees time to get up, have breakfast and get to work and was just one of a number of steam-era sounds that were an intrinsic part of life in Peterborough.

For Doug, 85, the clatter of trains has been intertwined with his entire life. He met his wife Judy while they were both working in the railways and in 1966 purchased their home less than a kilometre from their workplace and have lived there ever since.

Memories come flooding back for Doug as he sets eyes on the large Engine 409, among the last operating steam workhorses that is now kept in immaculate condition at the National Railway Museum. The imposing 149-tonne locomotive powered through Peterborough transporting heavy ore from Broken Hill to the smelters at Port Pirie before it was retired in 1970, when diesel locomotives made steam trains obsolete.

“Steam trains are definitely noisier than diesels, let me tell you. There is a lot of noise because steam locos have got to keep getting rid of the build-up of steam through release valves,” says Doug whose interest is sparked by another of the museum’s engines on display.

Of the iconic Y series of locomotives, Engine Y97 was known for many years as the “Roundhouse Rat”, shunting carriages on Peterborough’s famous turntable to become the longest-serving steam engine of its class. Luckily, some locomotives such as these have been saved from the scrap heap for future generations to enjoy and learn about this bygone era.

Much of the state’s industrial development was driven by the railways and Peterborough was the engine room of the Mid North. At its busiest during the 1950s, the town’s railway depot was a large-scale operation with more than 100 steam trains passing through each day.

Even back in the late 1800s, more than 70 trains were reported per day. These days however, fewer than 50 trains pass through Peterborough each week.

“You needed a plethora of people to make a locomotive depot work and it ran 24 hours a day, seven days a week,” says Doug.

The town was originally named Petersburg until 1918, when the government eliminated town names of German origin. Before all of Australia adopted a standardised rail system, Peterborough became one of the very few rail centres in the world where three different railway gauges came together in one station yard. At the heart of the town’s locomotive department was the famous turntable and roundhouse; at one point home to a stable of about 40 steam locomotives.

With such high traffic on the rails, some horrifying railway accidents were reported over the years. These included a number of derailments and even collisions, while other hazards included washaways, dust storms and snow.

In 1908 a train’s guard was lauded for bravery when he managed to stop 52 rail trucks that broke away from a train at the top of a hill. The man applied the hand brakes on individual trucks and succeeded in halting the train after three miles.

Having worked in many areas of the railway administration, Doug still has a sharp mind for numbers and can remember the names of stations all over the Mid North.

“It was organised chaos because everything ran to a meticulous schedule. A train couldn’t be in the wrong place at the wrong time, so it was highly synchronised and you had to know what you were doing,” he says.

While Peterborough’s winters can be bitterly cold – snowing at times – it was a vibrant place full of young people and families during the 1950s and ’60s.

“The railways were quite enormous; it was a bustling place with young people who were moving around and still growing their families,” says Doug’s wife Judy.

“Consequently, a lot of babies were born here and many people have ties to our town. Scratch anyone and they’ll say they lived in Peterborough or they know someone who did. It was a high-energy town full of enthusiastic people, flushing with fresh ideas.

Over the years, Doug and Judy have seen their town’s population reduce from more than 5000 to about 1600. The introduction of diesel locomotives and new technology, privatisation, road freight and a range of other factors all meant that Peterborough required far fewer workers and infrastructure.

“Things changed rapidly, practically with the flick of a pen, and it was difficult to watch,” says Doug, who is still proud of his town’s history and having played a part in it.

The nostalgic chugging, whooshes and whistles of steam trains both captivate new generations and bring back nostalgic memories for those such as Doug who remember being around them.

Today, South Australia’s rail history can be experienced at Peterborough’s recently-upgraded Steamtown Heritage Rail Centre, which boasts an acclaimed light show, displays, locomotives and the impressive half-circle roundhouse turntable, built in 1926. The roundhouse was recently restored through the Silver to Sea Way tourism route from Port Pirie to Peterborough; a route that takes in towns such as Crystal Brook, Gladstone and Jamestown.

“There aren’t many better historic railway displays anywhere in the country than there are here in Peterborough,” says Doug.

“We’ve got the best roundhouse still in working order.”

Judy is an integral member of the Peterborough History Group which maintains displays and information, including a historic print shop and a photographic collection of the late railway worker and photographer Lionel Noble. The impressive Lionel Noble Collection is today maintained by Lionel’s son Jeff and provides an important window into the town’s railway history.

The state’s wider steam history is immortalised at the volunteer-run National Railway Museum at Port Adelaide. While each train tells a story, Doug himself is a treasure of knowledge and is among the last of a generation.

“We are getting very thin on the ground now; we lost another six Peterborough boys last year,” Doug says.

“There are so many stories and although nothing was ever written down to prove that these things happened or when they happened; we know that they did.”

This article first appeared in the June 2022 issue of SALIFE magazine.