Belinda Hannaford: The theatre of life

Belinda Hannaford is a stalwart of South Australia’s dining scene, and nothing is slowing her down.

A 1970s soundtrack floats throughout Belinda Hannaford’s inner-city home as she chops, stirs and sprinkles away in her kitchen. The legendary figure of South Australia’s food landscape is brimming with excitement — after decades of entertaining, it’s still something she loves dearly.

It’s no secret that preparation is the key to success when cooking for a group, but Belinda takes it to a whole new level. Her kitchen isn’t just cosy, it’s downright tiny. Yet, the show must go on and today’s host has spent a lifetime perfecting opulent dining from small-scale cooking spaces. If anything, she relishes the challenge.

While Belinda keeps lists and knows exactly what needs to be done, her natural creativity and culinary intuition guide her more than a recipe ever could.

“I’ve taught some CWA classes and I had to tell them, ‘A pinch of this and a touch of that’ because I don’t write recipes down,” Belinda says.

Today’s lunch is a rolling feast of dishes, including cos leaf Thai kingfish ceviche, salmon souffle, pappadum cups with chicken, gnocchi semolina, eggplant rolls, zucchini boats and a sweet note of fresh oranges, praline, yoghurt cream and macadamia biscuit to end it on.

Belinda has managed to churn it all out from one burner and a convection oven, although she’s had more than a little practice. 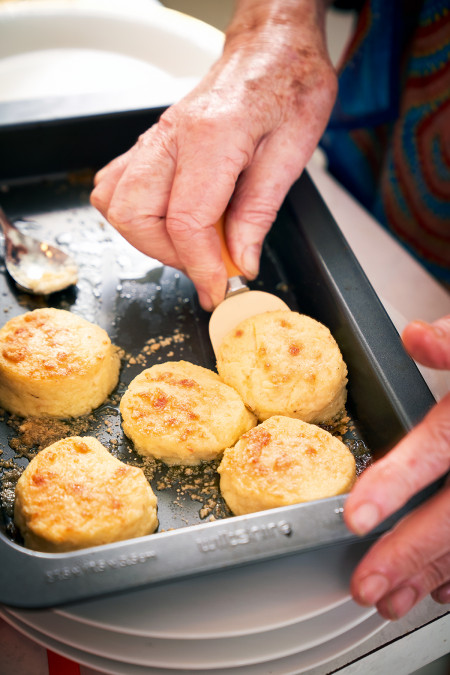 The trio of gnocchi, eggplant and zucchini boats were a staple on the menu at Jolleys Boathouse, which Belinda launched in the 1980s. Her foray into food began long before that, with her at-home eatery, Belinda’s Restaurant, where she catered for one table of 12. She then ventured into hosting parties in other people’s homes, which ranged from elegant to outrageously naughty.

Belinda has had an interesting time recalling all the old stories in her book, Sourcing the Sauce. She says those dinners were filled with “silver service, five courses and extravaganza”. Guests included Don Dunstan and Alan Bond, who left behind a $200 tip.

One of the most memorable nights was a “rude food menu”, requested by a guest.

Belinda’s Restaurant was complete with napkins printed with a favourite parochial quote: “The great thing about Adelaide is that if I don’t know what I’m doing, someone else always does.”

Growing up on Robe Terrace, in a home that was both grand and stifling, Belinda says she found solace in the kitchen, with its servants from different backgrounds. From the age of seven, she developed a passion for food that has never left her.

“I used to live in the kitchen — everything came from watching my mum cook and inventing dishes. I used to cook meals for the family for sixpence and serve them breakfast in bed. Food has been every moment of pleasure throughout my life.”

Her love of entertaining was also passed down from her mother and Belinda has piled her table with food for friends countless times in her life. “My mother was the most incredible hostess. She was sensitive to everyone, so if there was a wallflower sitting there, she’d drag everyone together and make sure they were in a small room so they were tucked in together and nobody was left out.”

The food and entertaining genes have been passed down to yet another generation; to Belinda’s children. Her son Nick runs LifeTime Private Retreats on Kangaroo Island and her daughter Rachel owned and cooked at Kangaroo Island’s Enchanted Fig Tree, before moving to Mexico with her wife.

As Belinda awaits the arrival of her friends, she switches the music to the sultry sounds of French jazz and takes up a seat in the leafy oasis she’s created in her compact front garden.

As she sips bubbles from a coupe, Belinda chats about how her idea of space has transformed in recent years, moving from the expanse of Kangaroo Island to the city.

“I had complete serenity there so, coming here, I had to find it myself. I’ve learnt the most important thing isn’t how big your space is, it’s what you create with it.”

What Belinda has created is a sanctuary that feels a world away from its Whitmore Square location; a luxurious bohemian haven full of quirk, beauty and eccentricity.

Her front garden, with a charming bar, was used to its fullest potential this year, when the city slowed and restrictions were in place.

Through COVID-19, Belinda has found a kind of calm. While her dining table is often full, she’s taken the opportunity to connect more strongly with her friends one-on-one, hosting at a more intimate level nearly every day for weeks on end.

Each of today’s guests was invited to the lunches, and Belinda says her cooking has never been better. She’s been slowing down to hone her cooking skills, all with the added challenge of losing her sense of smell and taste.

One thing Belinda has carried with her throughout her years of entertaining, and will hold onto forever, is the inimitable skill of curating a guest list. Many of today’s guests are strangers to each other, and that’s just the way Belinda likes it. “If you just keep inviting the same people, you have the same conversations. Rich conversation is just as important, or even more important, than the food because it makes the occasion.”

Belinda’s rule of thumb is to cap guests at six for a more intimate feeling. Any larger, the group splits into two conversations. There is a blanket ban on long tables, which inevitably leave someone awkwardly trying to fit into conversations on either side of them.

Today, the guests represent different areas of Belinda’s life. Judy Hardy was South Australia’s Director of Mental Health when she and Belinda met and has been to countless soirees hosted by Belinda. “Judy and I had the most exotic dinner parties. They went on and on for eight courses and everybody got very drunk, but they were a lot of fun.”

In charge of cocktails is Liz Brooks, who has travelled extensively with Belinda over the years.

Stephanie Koeppen is a friend from Kangaroo Island and Pat Venning would have dinner parties with Belinda in the hallway of the East End Apartments when she lived there.

Marianne Pope is a chef-turned-nurse, who cooked at Jolleys. She’s worried she’s not appropriately dressed for the occasion, so Belinda pulls elaborate scarves and boas from a coat rack full of elegant accessories in her living area, further adding to the whimsy she’s created.

They might be strangers, but the guests break the ice over one of Liz’s kir royales and the kingfish and, by the time they’re seated around the table, they’re sharing stories from their lives.

Marianne recalls the wild and wonderful stories from Jolleys, including once when they received a very late phone call that the cast of The Rocky Horror Picture Show, then at the Festival Centre, wanted to come in for something to eat. “We didn’t have much food, so Belinda was in the kitchen throwing things together and creating platters,” Marianne says. “Belinda just told us to keep bringing them wine and it was the best time ever. They were dancing up and down the restaurant and I think they left at 2am.” 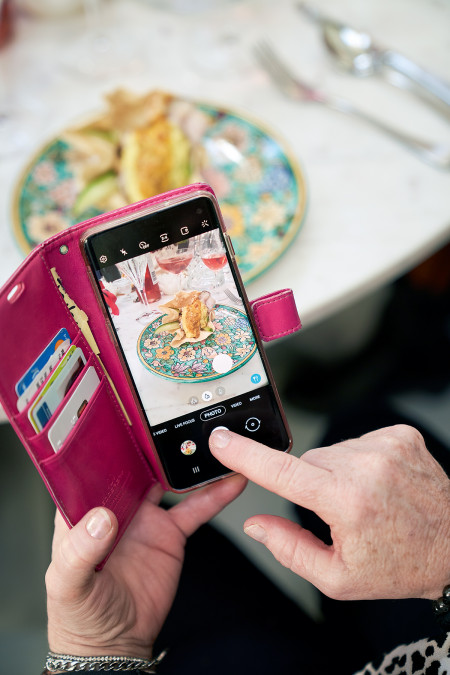 Then there were the times the staff would have a late night at the restaurant, sleep at Belinda’s house and she’d drop them back at Jolleys in the morning, clad in her nightgown, and go back home to sleep while they prepped.

It’s not long before talk turns to the way in which their lives have changed because of COVID-19 and quickly, the light chatter turns into meaningful discussion about the future of our society just the thing Belinda appreciates at her gatherings.

“I want my guests to feel like they’ve had a connection to a conversation — not about how many children you’ve got or where you went on holiday. It might be spiritual or philosophical. There’s so much going on in the world, why can’t we have a conversation that matters to us that allows us to connect on another level?”

There’s never a silence between the thoughtful musings, raucous laughter and compliments to the chef. By the end, the plates look clean enough to put right back in the cupboard and Belinda’s guests are leaving with satisfied tastebuds and high hopes for their next invitation. 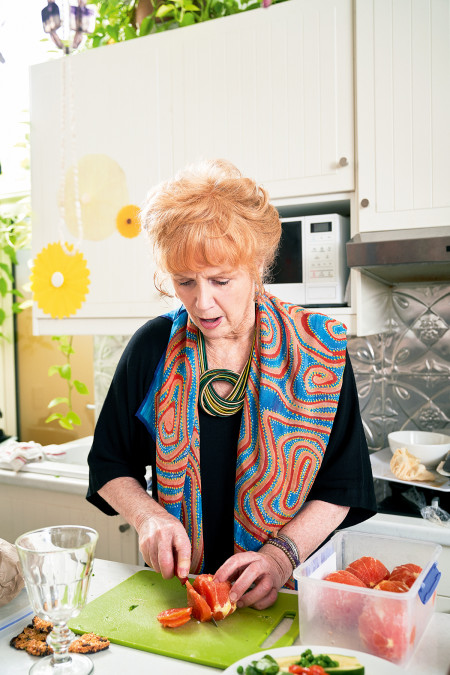 This story first appeared in the October 2020 issue of SALIFE magazine.