There might be no more ideal spot for a long Sunday afternoon lunch than Kay and Julian Burton’s Crafers West home.

Kay and Julian with their children; Max, Mya, Seb, AJ and Archie.

There’s a welcoming party at Kay and Julian Burton’s home. Shouts of “Hello!” ring out as feet spring from the trampoline, catapulting their owners skyward.

It’s one of those days made for playing outside. The sun isn’t quite blistering, but warm enough to be able to alternate between running on the lawn and jumping in the pool.

Kay, the SA state manager at Philanthropy Australia, has invited a tight-knit group of friends for lunch and, including the kids, there’s quite the crowd to cater for.

But having lots of mouths to feed doesn’t intimidate Kay – there are seven in her family – and she has had a love of entertaining since she first left home.

Raised in Maine in the US, Kay studied communications and journalism with the original intention of becoming a sports journalist, but then moved to Washington DC to work for a senator. She left home, bound for Capitol Hill, but something unexpected stood in her way.

“I was going to be this independent woman. My car was packed and I drove an hour and I hit a moose.

“I had to call Washington and say I was going to be a month late for my internship because I was injured and I now had this fear of driving.”

Kay finally made it to DC and worked for US senator Susan Collins, serendipitously moving into the role of executive assistant after just a couple of weeks.

“She’s still in office today and one of the hardest workers I’ve ever met,” Kay says.

While in DC, Kay met an Adelaide-born politician. “We had this whirlwind romance and I decided to move to Adelaide.

“I’d worked in politics for five years and it can be all-encompassing, so I wanted a different pace in life and a different outlook.”

While the relationship didn’t work out, Kay says she’s grateful for the part he played in paving her direction in life. Kay was enjoying Australia and, after travelling, became the second employee hired at SAHMRI.

Kay has always been passionate about contributing to the community. When she met Julian in 2012, they quickly realised their values aligned. However, it wasn’t a completely smooth road to where they are now; Kay was apprehensive when a mutual friend tried to set them up.

“He was separated with two kids and I was ready to move back to the US. I thought ‘No way’,” Kay says.

But there wasn’t much stopping it once they started seeing each other.

“As soon as I met Kay, I knew she was special and I was going to spend the rest of my life with her,” Julian says.

“It was mutual,” Kay chimes in.

Despite her initial apprehension to dating someone with children, Julian says he’s forever grateful for the way his wife embraced Max and Archie, who are now 16 and 13.

“She has a magnificent relationship with them and that’s a credit to her and the boys,” Julian says.

In the early days, Kay says there were tears, plenty of Googling and lots of growing up and learning on her end. “I think any step parent will say not having that biological connection can be challenging, but you’ve just got to push through that and recognise their needs and wants as a child – and that’s just to be loved.”

“We had week on and week off with the older ones. She had every right to say it was too hard or it wasn’t the life she wanted. She knew it wasn’t just me – it was three boys she was committing to,” Julian says.

Kay remembers a moment she was talking to a woman from New Zealand about missing home.

“She said, where you have kids is where your heart is and where your roots are planted. I couldn’t really understand it at the time, but I got it when I had these little Aussies – we call them Ausmericans.”

Kay’s first biological child, Seb is now seven, and a further two additions came along after him – AJ and Mya, five and three respectively. With a big happy, healthy family, the Burtons are intently aware how blessed they are, and that has fuelled them to give to those less fortunate.

A survivor of the 2002 Bali bombings, Julian was inspired to help with prevention, care and research associated with burn injury and started the Julian Burton Burns Trust in 2003. For his work, he was named the 2010 South Australian of the Year. He stepped down from the trust in 2016 and now works in the biotech space with artificial skin technology.

Kay and Julian established the Burton Family Foundation in 2018, a long-held dream of theirs.

The foundation gives the couple an opportunity to cement their values as a family and educate the children about what it means to give back. 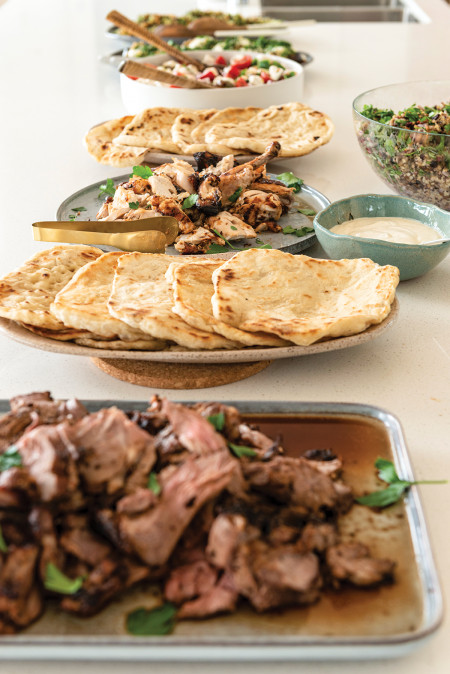 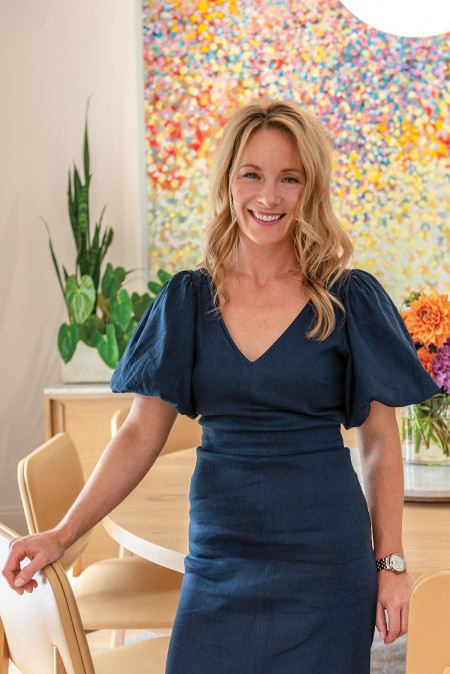 “It widens their eyes to the social needs of our community. For our children, it was important that we raise them with the value that it’s their responsibility to support others, to look after each other, and be kind. We’ve always had that mindset that if you can give back, you should.

“We love the word philanthropy because it means ‘the love of humanity’ and that really resonates with us and our values.”

The Burton Foundation is the first time Kay has sat on the funder side of the table, with both her and Julian having prior experience in the not-for-profit side.

When her time at SAHMRI came to an end, Kay made a plan to take five years off to raise a family. That five years was up in June last year and Kay found her way to Philanthropy Australia.

“Philanthropy Australia came up and it was perfect because it was a position I could sit in that could marry the two worlds,” Kay says.

“I appreciated the challenges of the not-for-profit sector and how hard it was to raise sustainable funding, and I was fortunate to see things from a funder perspective.”

The home for this large, busy blended family was designed with entertaining in mind. When Kay and Julian bought their Crafers West property, on it stood a modest villa. They enlisted architect Domenico Allegretto, builder Sandy Quigley and interior designer Vanessa McCully. Collaboratively, they created an extension to the side of the original building, with sympathetic stonework and expanses of glass that lets the landscape in.

From the moment she’d decided to settle in Australia, Kay knew she wanted to be in the Adelaide Hills, with its fiery-toned autumns reminiscent of Maine’s fall season. 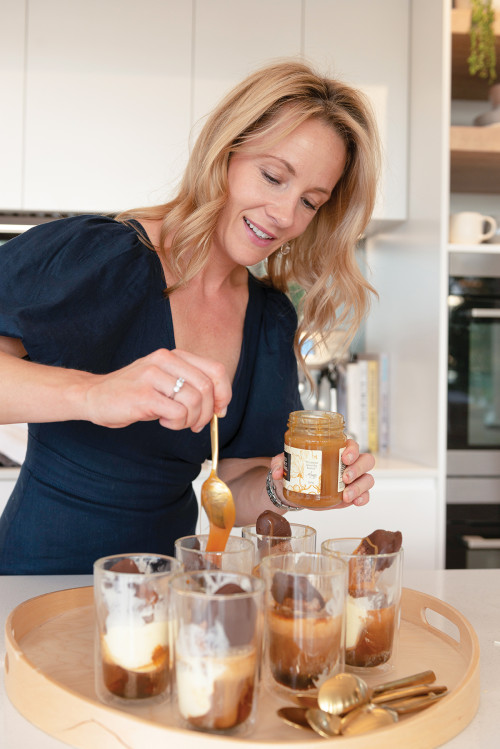 As Kay works away behind the kitchen island, small hands reach up to pilfer pikelets meant for the salmon blinis.

Julian’s brother Darren and his wife Jo have brought along their children Isobel, Jack and Milly. Also invited today are Amy and Rob Bredon with sons Jack and Hugo and Scott Shepard with daughter Sienna.

It might be a wide age range, but everyone’s catered for. The pigs in a blanket are a hit with the kids and nostalgic for the adults. Homemade dips and pita bread add something special, and it’s hard to disappoint with flavoursome rotisserie chicken and lamb.

Rob, a former chef who now works for Miele, pulls on the apron to lend a hand.

“Food is one of those things. It’s lots of fun and it brings people together,” Rob says as the lamb falls apart under his knife.

Kay has set up two long tables out on the balcony, overlooking the Hills, with the sea visible in the distance.

After a pool break for the kids, Julian sets about lighting a fire for a dessert to celebrate Kay’s American heritage – s’mores. They’re paired with choc dipped strawberries, made by the children.

There are affogatos for the adults featuring Maggie Beer ice cream and homemade biscotti, but most of the grown-ups are fireside, s’more in hand.

This article first appeared in the April 2022 issue of SALIFE magazine.