Eboney Sheehan was living in Sydney, had a great job, good mates and life was on track. All that changed last year when she found a lump in her breast. Here, the 35-year-old, who works in construction in SA, talks about her battle with cancer and her passion to raise funds for “cold caps” - a method to help people undergoing chemotherapy keep their hair. 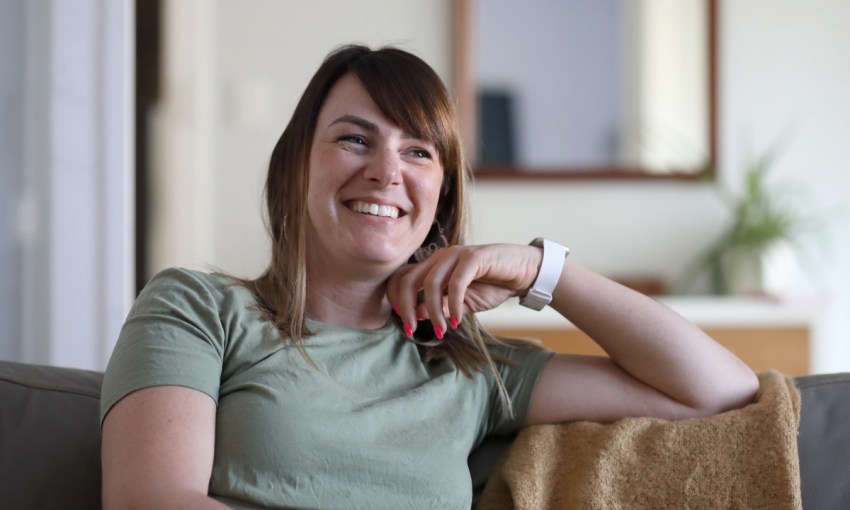 Eboney Sheehan: “Cancer has given me a really quick crash course on how to stop worrying about what everyone else thinks.” Photo: Tony Lewis/Solstice Media

I grew up in Exeter on the Le Fevre Peninsula and I loved it. I have two sisters: Soulaie is three years younger and we are insanely close, while Majenta is nine years younger than me. My childhood was always so much fun, living not too far from the city, and the beach within walking distance. I had plenty of hobbies as a kid – the only one I stuck with was netball. I did all the usual things like karate, dancing, sports and music.

While my parents weren’t prison-camp strict, I did find their rules a lot tighter than my friends’ parents. Mum was the rule-maker and enforcer. Dad was the guy who you could get to bend the rules most of the time. When I was 18, my parents separated and then divorced. As an adult, I’ve grown to know them each individually and I know divorcing was absolutely the best thing for them and us.

My most vivid childhood memories are moments in the kitchen on drying duty while dad washed the dishes. Our kitchen radio was constantly tuned to Triple M, and music was always on.

As a kid, I wanted to be a lawyer or a police officer. I ended up working in construction as a contracts administrator.

I found my 20s a hard time in life trying to work out who the hell I was and being comfortable with it. There’s a lot of pressure from society as a woman during these years, to be a certain person and conform to the usual mediocre job while becoming a wife and mother. It almost feels like a competition. If you’re not married and at least planning children by the age of 27 or 28 then people really seem to scrutinise you.

I was often [and still am] questioned by people who aren’t really close to me as to why I don’t have children by now and if I want them. This is a really personal and rude question in my opinion. I don’t think people realise just how much of an arsehole they sound by asking this, especially given my situation as it is currently. Excuse me for not prioritising my desire for children while trying to stay alive! Sometimes, people just need to pull their heads in and stay in their lane.

I remember in December 2018 looking at myself in the mirror and thinking how happy I was with my health. I was in the best physical shape I’d ever been in. I was working out daily, sleeping well with an excellent routine, eating minimal processed/sugary foods and my gut health was fantastic. I genuinely felt from the inside out the healthiest I’d ever been. 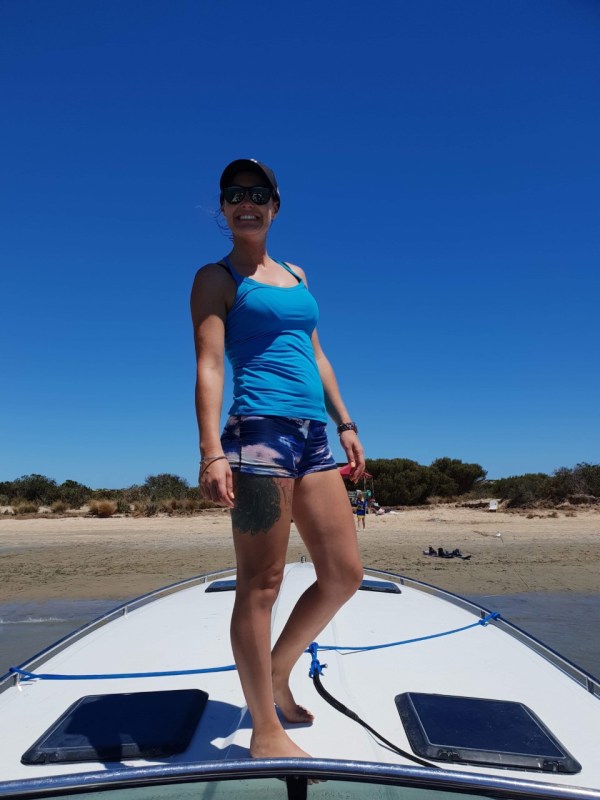 Then, in January last year, I noticed a small pea-sized lump on my right breast during a routine self-examination in the shower. As most people do, I left it for a couple of weeks to see if it would go down or disappear. It didn’t. So I listened to my body and I got myself off along to the doctor for a checkup. From there it was a referral for an ultrasound, which came back showing two other small lumps in my left breast. While the additional lumps were confirmed to be fibroadenoma (non-cancerous), the initial lump in the right had come back with report findings of “suspicious mass” with a further recommendation of a biopsy. I had a fine needle and core biopsy done on February 14 [Happy Valentines Day!] and I was due to attend my GP for results on Tuesday 19th. However, on Saturday afternoon, February 16, I got the call that totally changed the direction of my life.

It was a whirlwind of a call. As my regular GP didn’t work weekends, the call came from one of the other doctors in the clinic. At no point was the “C” word ever directly said [I don’t think they’re allowed to], but there were some pretty serious words thrown at me – enough for me to be able to read between the lines and know it wasn’t ideal news.

I remember hearing words like, “I have a surgeon on standby” and “we need to get this out as soon as possible” but the world around me became a blur during this call.

I was living in Sydney by then, so I was in a city where I had friendships with surface-level connections, but no partner and no family. My first call was to my sister. She had known what was going on, however, my parents were out of the loop. I didn’t see the point in discussing details of my life unless there was something worth mentioning. My sister insisted it was time to tell our parents. But how the hell do you tell parents that you have cancer? I still don’t have the answer for this. So I asked my sister to drop that C-bomb for me. I feel very selfish looking back now asking that of her, as she too had just been dealt an absolute blow with my news, but I just couldn’t deal with the initial reactions from each of my parents while still processing my own feelings.

It then all moved very swiftly. Monday morning I went to my GP to be officially diagnosed. It was then decided I’d fly to Adelaide to see a breast cancer surgeon here for initial assessment and treatment plan. I saw doctor Beverley Fosh, and her assistant Julie was my first point of contact and took away all the stress of what to do next. I’ve been in Bev’s very capable hands ever since, and underwent surgery in September last year. I had a partial mastectomy and four nodes removed.

I’ve since made a full physical recovery, and have been deemed cancer-free. My mind is now a little scrambled amongst the aftermath of cancer and active treatment, but I’m working on that.

You wear it before and after each drug treatment and the results for me have been unbelievable. While I did initially have some decent hair shedding during the first three months of chemo, it ceased during the second lot of drugs and at most I lost around 20 per cent of my overall hair. I had no bald patches and the thinning was really only obvious to myself or people I actually showed. Having this technology available during treatment was an absolute game-changer for me. My brows and lashes still showed evidence of chemotherapy, but they have both since made a return.

I was so grateful that even on my worst days through treatment, I was still able to feel like myself thanks to the scalp cooling technology. I’m a huge believer in attitude playing a big part in life and the old saying of “look good, feel better” absolutely rings true. This technology is so close to my heart, and with my own personal experience, I want to see it available for all patients in the public health system. I’ve teamed up with the Flinders Foundation to fundraise $45,000 for the Flinders Infusion Centre to have a two-patient machine available. I’ve worked hard to try and put the word out there to gather donations. The Flinders Infusion Centre now has a machine available to patients.

I returned to the workforce on a fulltime basis again in November of 2019 as a health, safety and environment advisor within the construction industry. I fell into construction completely by accident. I started in a role in 2010 as a receptionist. In the five years I was with that company, I did a variety of roles gaining valuable skills, which I took to Sydney and landed an estimating role within the commercial game. I then shifted into the residential building space in 2016. While I’m back in commercial now, I absolutely love all aspects of the construction industry. 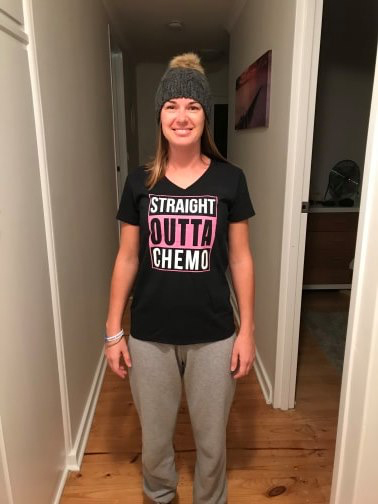 I’m not married and don’t have any children, and that’s just the way things have happened for me so far. My priority has never been about being a mum. My priority has been about finding the right person – anything that happens after that will all just happen naturally. I don’t believe in timelines or putting pressure on relationships for these things. I have been fortunate enough, however, to snag the most amazing and supportive boyfriend since being back in Adelaide and in November last year, we moved in together.

His name is John Khammash and we were just friends for many years. However, when John heard I was sick, he came to Sydney with my dad in a truck as part of my rescue team to help pack up my life and move me back to Adelaide. He’s been so amazingly positive and solid through this whole thing. He really makes me feel like an equal part of a partnership and I honestly can’t fault the guy in any way. He’s absolutely and utterly my person.

Cancer has taught me to slow down and to dispose of things that don’t serve me or make me happy.

Pre-cancer, I liked to burn the candle at both ends. I was always pushing through when I wasn’t 100 per cent – at work, in my personal life, at the gym – and I concerned myself way too much with pleasing everyone else around me, even if it wasn’t extended both ways.

Cancer has given me a really quick crash course on how to stop worrying about what everyone else thinks. I listen to my body, slow down and if I need to rest, then I rest. I no longer waste my time doing things I genuinely don’t want to do, and I’m politely honest about it. Life really is too short to spend it doing things that don’t bring you joy.

I never used to worry about much but after being diagnosed with cancer, but I worry about metastatic cancer and life being taken from me before I’ve got to experience a future.

But the good news is I have just got results back and I am cancer free and I’m absolutely over the moon. My radiation treatment finished last December and thankfully my skin was also saved as my cancer centre offered Mepitel film during treatment, which minimises skin breakdown.

As for the future, I think about buying a property, getting married, travelling and planning a life with John.

My South Australian Life is a new first-person series, published each Sunday. 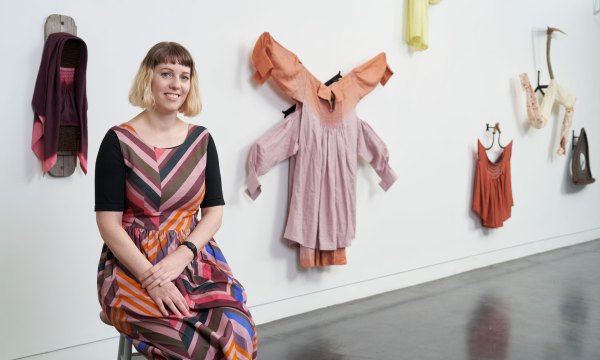 Julia Robinson realised early on that art was a passion she would pursue at all costs ­– it’s also how she met her husband, fellow artist Roy Ananda. Julia finds inspiration in folklore and folk horror, and is a keen folk dancer.