Ever-reliable outback postie Karen Cains says she has the most picturesque mail run in the country, and she might well be right. 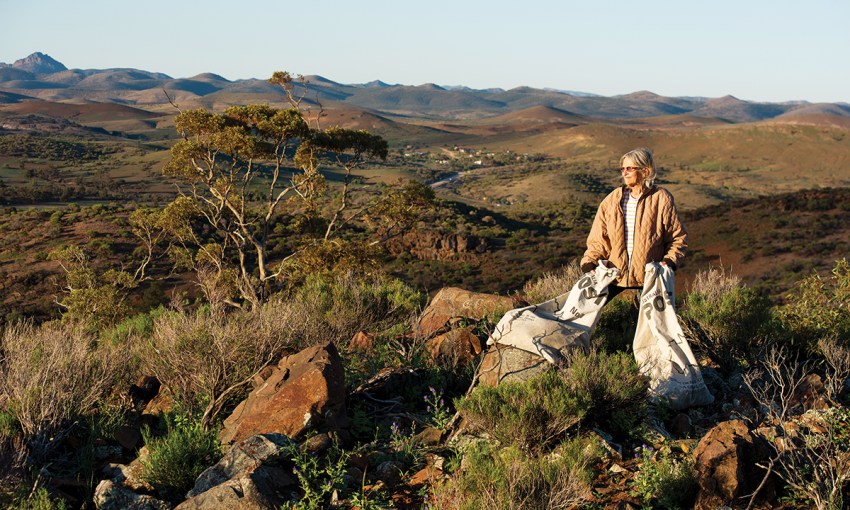 Karen regularly stops to soak up the scenery of her extraordinary back yard.

Peering over the steering wheel of her trusty Land Rover, 63-year-old Karen Cains absorbs every bit of scenery as she rattles along the winding dirt road that snakes its way between Blinman and Parachilna. It’s a journey this diligent post master has made three times a week for about the past 30 years.

There’s a familiarity to every bend, gorge and creek crossing, yet no two trips are ever the same as Karen’s sharp eye picks up the wedge-tailed eagles, kangaroos, wildflowers and drought-wilted gum trees threaded throughout postcard-like Flinders Ranges scenery.

Rain, hail or shine, she sets off on the 65-kilometre round-trip to pick up letters and parcels from Parachilna and transport them back to the Blinman Post Office, with a stop along the way to deliver mail to the small outpost of Angorichina Village. 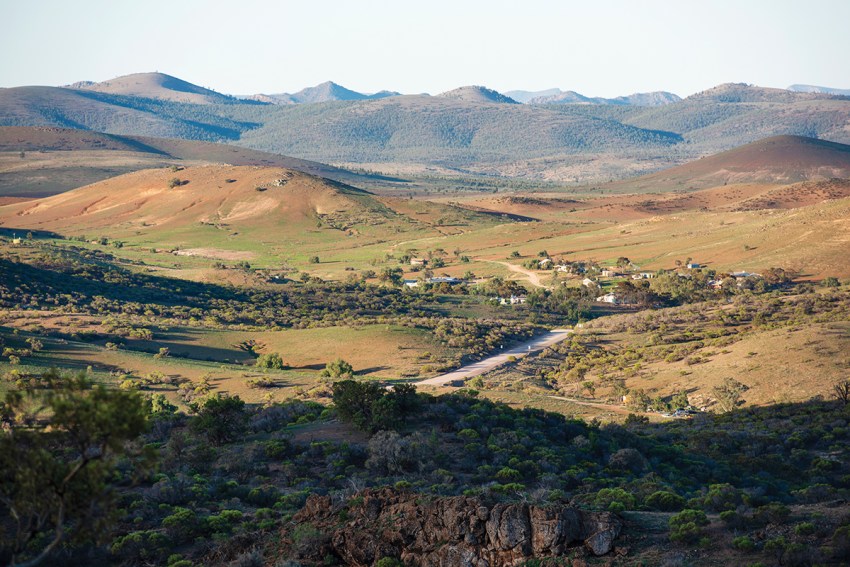 “I think I have the most picturesque mail run in the country,” Karen says.

“It’s a lovely drive, I really do enjoy it. Every time you see something different. I’m not a photographer by any means, but I love to take photos so I do every day.” Karen regularly posts her snaps from the mail run to the Blinman Township Facebook page.

“It’s up and down and windy, but it has great views. Parachilna Gorge is really popular with campers; it’s a beautiful spot.”

Blinman boasts the title of South Australia’s highest town with an elevation of 610 metres. Along with the post office, it’s home to the North Blinman Hotel, a general store and a cafe. The town has a permanent population of about 20 residents who can often be outnumbered by tourists drawn here for the heritage mine tours, hikes, scenery and history.

The mail is a vital link to the outside world for the small population of outback folk living in this isolated region 500 kilometres north of Adelaide. Karen’s mail route services about 40 people including those in the surrounding pastoral properties. At times, her Land Rover can be full to the brim with parcels containing everything from medication to home furnishings and dog food.

“There aren’t as many letters these days, but there are twice as many parcels now that everybody’s ordering online,” Karen says. “As I’m getting older, sometimes it can be a bit of a challenge depending on what people have ordered. Christmas is quite steady, but this year it’s been busy all year.”

Originally from Adelaide, Karen and her husband Irving transplanted their family to the outback in the mid-’80s and have never looked back. “No regrets,” says Karen.

Their children Christopher and Monique were schooled through School of the Air, completing their studies at Leigh Creek and enjoying a healthy outback upbringing.

Irving did the mail run initially, before he picked up other work and Karen inherited the job. The couple still live in the post office, which was built in 1876 and today has just 18 mailboxes.

It’s by no means a lonely existence, between chatting to locals as they pick up their mail, meeting the many visiting tourists, going along to the pub’s popular Friday pizza nights and barbecues at Blinman Cricket Club home games. The town even has a golf course, although Karen admits it’s a bit rough.

“If there’s something on in Blinman, everybody goes,” she says.

The drive to Parachilna can be completed in a standard car — until it rains. “The drive is really good, but it’s a dirt road so it can change in wet weather. It has been known to be totally washed away in places,” says Karen.

There are seven creek crossings between Blinman and Parachilna. Karen has a rule not to cross water that is either flowing too fast or so muddy that she can’t see below the surface. “You just don’t know what’s below,” she says. “It might look alright, and there’ll be a four-foot hole underneath.”

Many people have been caught out over the years and vehicles have come to grief. Cars and trailers have been completely washed away, while cars and even buses have had to be rescued and towed out.

During one winter, when Karen and Irving tried to make the trip together, the creeks filled up so quickly they became caught between two crossings and had to sleep in the car for the night, listening to what sounded like a train roaring down the creek.

“Back in March, 1989, it was well over a week before you could get a four-wheel-drive through the gorge and nearly three months before a car could get through due to a big flood that took the road with it,” Karen says.

Yet in all of Karen’s years as the postie, the mail has only ever been held up by three days at the most.

Summer can also be harsh and the past few years of drought have been particularly dry. “Even though it’s a lovely drive, the trees are looking sad. If you get a bit of rain it doesn’t take long for them all to pick up again,” she says.

Today, more and more people are heading to the Flinders during the warmer months thanks to reliable, air-conditioned vehicles.

Established as a copper mining town in the 1800s, Blinman was once home to more than 1500 people. Its mining history and unique heritage mine tours are a major drawcard, making Blinman a popular stop on the way to Arkaroola.

“It’s a great place to visit, the whole area is,” says Karen.

“It can be quite a relaxing lifestyle here; there’s so much to see and do. The view can change every day — one day there will be wildflowers and the next we’re in drought. But even in the worst times, it still looks good.”

Still going strong in her 60s, the Post Master has no plans to retire.

“I haven’t got any plans to, but I guess it will happen one day. At the moment, all is well,” she says.

This story first appeared in the February 2021 issue of SALIFE magazine.