With a recent surge in ownership of premium dog breeds, Adelaide dog groomers are in demand now more than ever. Meet these groomers and their well-kept fur babies.

Monkey turns heads the moment he waddles out of the salon on the lead of his owner, experienced dog groomer Donna Lindsay. Pekingese naturally have long, thick coats, but Monkey is groomed in a teddy bear trim – a style that is all the rage with owners of fluffy breeds.

Well known in the grooming industry, with 30 years’ experience, Donna is salon manager of Paws Then Play at Rostrevor. She commutes from her farm in the Barossa, where she owns several dogs and many other animals – but there are none quite like Monkey.

“Pekingese can be really aloof but Monkey is hilarious. They’re generally a one-person dog and he is very much a mummy’s boy; very, very cuddly,” says Donna.

The breed originated in China, where it is said to have been owned by the imperial family dating back to the Han dynasty, more than two millennia ago. Monkey certainly carries a regal look about him as he struts his finely manicured mane.

“Up until recently, I had him in full coat, so he about had eight inches of hair over his entire body but, living on the farm, he likes to go out and play in the mud! I’ve started doing a hand-scissor teddy groom, which is much easier for maintenance and his whole behaviour has changed because he’s more comfortable,” she says. 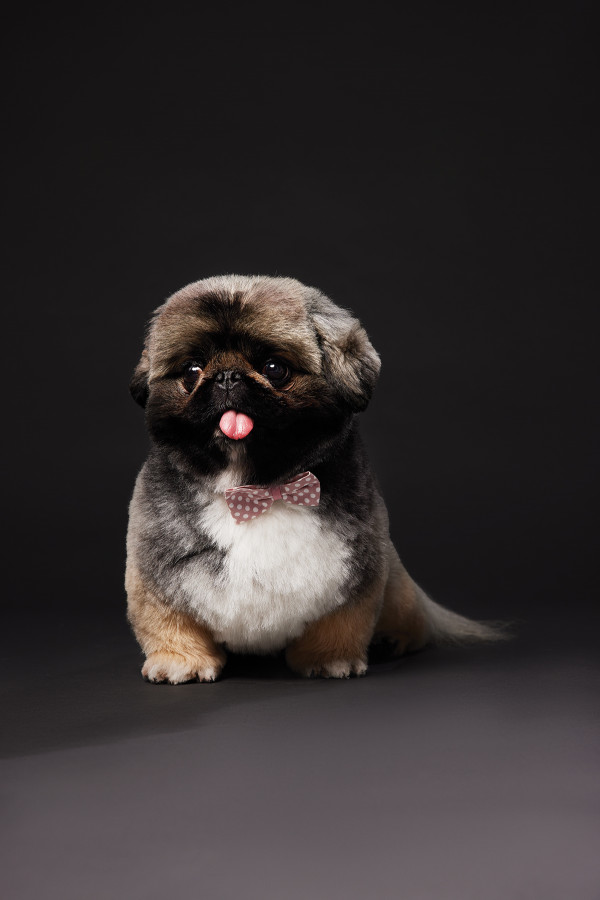 “Apart from the fact it makes him look absolutely adorable and like a real-life teddy bear, it’s much easier to maintain. He comes to work with me and gets groomed every two weeks. Many of our clients are on two-weekly schedules just to maintain the teddy groom, and no more than every six weeks.”

While most dogs will dutifully stand for Donna while she grooms them, Monkey is more of a challenge because he just wants to lay down to take the weight off his little legs.

Today about 80 per cent of Donna’s clients are various cross-breeds of poodle, with the teddy groom the most popular cut – a skilled procedure done with razor-sharp scissors. Her motto is that a happy dog equals a happy owner.

“The dogs walking out of the salon look amazing and fluffy, so when people stop and ask where they’ve had their dog groomed, that’s a huge reward for me,” says Donna.

“But seeing the dogs dragging their owners into the salon and wanting to jump up on the table is the most important thing to me.”

Back and sides, please

Five-year-old standard poodle Claudius and his owner Elisa Huckel are the greatest of companions, having teamed up for many road trips to compete in grooming competitions around the country. Claudius has helped Elisa to win awards and is so used to being groomed that he falls asleep on his feet.

“His trick is that he falls asleep while I’m grooming him. He just goes into a Zen state while standing up; he’s so relaxed and he loves the attention,” says Elisa, who runs The Spoilt Dog, one of the oldest grooming salons in SA. Fluffy dogs such as standard poodles are high maintenance, which Elisa says is not too different from her own hair.

“Naturally, I’ve got very curly hair – poodle hair basically – with full-on frizzy ringlets. I’ve got to maintain it if I want it to look nice and dogs are no different to humans, you’ve got to have regular grooming because their coats can matt up quite easily,” she says.

Claudius is bathed weekly and receives regular trims in the lead up-to competition. “He’s in what’s called a German trim. It’s a traditional trim that’s been around for a long time with the ears and tail shaved – shorter on the body and longer on the legs. You can put a poodle into any haircut. They’re a very versatile dog, which is partly why I love them,” says Elisa.

Through her salon, Elisa has previously offered blueberry facials and paw treatments but has found that customers are forgoing luxury options these days.

“I’ve done the fur colouring and the nail painting, which was quite popular but it’s all tapered off since COVID. The haircut is more important than having their toenails painted, and a good shampoo will do the same as a facial would.”

Puppy prices have soared over the past year, with breeders charging around $4000 for a standard poodle and even more than $10,000 for various poodle cross-breeds. However, Elisa can’t put a cost on the joy Claudius has provided her and her two young daughters since she bought him as a puppy soon after their beloved golden retriever had passed away.

“He’s such a beautiful boy,” she says.

Not just a pretty face

For Karina Tyrrell, dog grooming is a dream job that allows her to work with animals each and every day, helping them to look and feel fabulous. Karina first studied veterinary nursing but realised it wasn’t quite for her and luckily came across grooming. Today, she loves working at her salon within RSPCA Petville at Hillcrest.

“I’m a crazy dog lady, they’re kind of my whole life, but I’m most passionate about grooming. It’s a career that’s often overlooked for people who want to work with animals. I’m always happy to go to work and spend time with dogs; I think grooming is a great career,” Karina says.

Karina adopted her beloved Afghan hound Alaska from a Gumtree advertisement just a few years ago.

“She was quite old when I got her, we think she is about 11 now, so I didn’t get to show her in competition. She did do a grooming competition with me but she’s retired from all that now,” she says.

“She’s still a very glamorous soul at heart and loves to have a nice groom, be all pretty, and turn it on for the camera. I clip her body as a style thing, but also because it’s a lot easier for her now that she’s older – Afghans have to stand to be brushed daily and that’s strenuous on an older dog. She still very much looks like an Afghan, but it’s just a lot kinder for her.

“You have to think about what’s best for them. Being able to bring dogs comfort is what I like about my job; they walk out of the salon with a spring in their step because they feel so much better.”

Although there’s a stereotype that Afghans aren’t overly intelligent, Karina says it’s not so. “Alaska is very affectionate but she is also happy to keep her own company and is very independent – she just won’t do anything that she doesn’t want to,” says Karina.

With the increase in ownership of long-haired breeds, good dog groomers such as Karina are in high demand.

“The industry is wonderful and we need more groomers in Adelaide. It’s a great career and harder than people think. Stylised grooming is quite artistic, too,” she says.

“Dog grooming is a bit of a club and we’re all friends. I’m still learning so much about grooming in general; it really is a craft.”

This story was first published in the September 2021 issue of SALIFE magazine.