With a history dating back to the late 1800s, this Carrickalinga farmhouse has been lovingly restored by Anne and Andy Reeves.

It’s easy to see why early settlers decided to inhabit what would eventually become known as Forktree Homestead.

Overlooking green farmland stretching down to the sandy beaches of Carrickalinga, with coastline views to Cape Jervis and Kangaroo Island, the circa-1890 property was named after the staging post for the transport route along the western Fleurieu Peninsula from Adelaide to Cape Jervis.

It was also developed into a sheep and cattle station of some 3000 acres, which has since been subdivided.

Anne and Andy Reeves purchased Forktree Homestead in 2014. At the time, they were looking for a sea-change from their previous Adelaide Hills address and were stunned by the property’s historic charm and breathtaking views. “We walked in and just got a really good feeling about the place,” Anne says.

“We could see a way of doing an extension to give us a master suite that would have a lovely sea view,” Anne says. They set about renovating the 1950s farmhouse which had been built around the original 1890s stone cottage.

The project grew significantly when Andy was doing some work on the roof and realised the view from up there was too good to waste. “He said ‘you know what, we’ve got to use the roof space as well’,” Anne says.

The roof space is now a large studio apartment and bathroom, with its own balcony to enjoy the view. There are two additional upstairs rooms, which Anne and Andy have used for storage.

The five-bedroom, three-bathroom property can accommodate multiple generations or families under one roof. Anne says the spacious home could also be set up as a boutique hotel, bed and breakfast, cellar door or holiday apartments.

“What’s nice about it is we can close the bedrooms off when we don’t need them, but we can also expand and accommodate lots of people. We’ve got four children and six grandchildren, so when we get together for Christmas we’ve got space to accommodate everybody.” 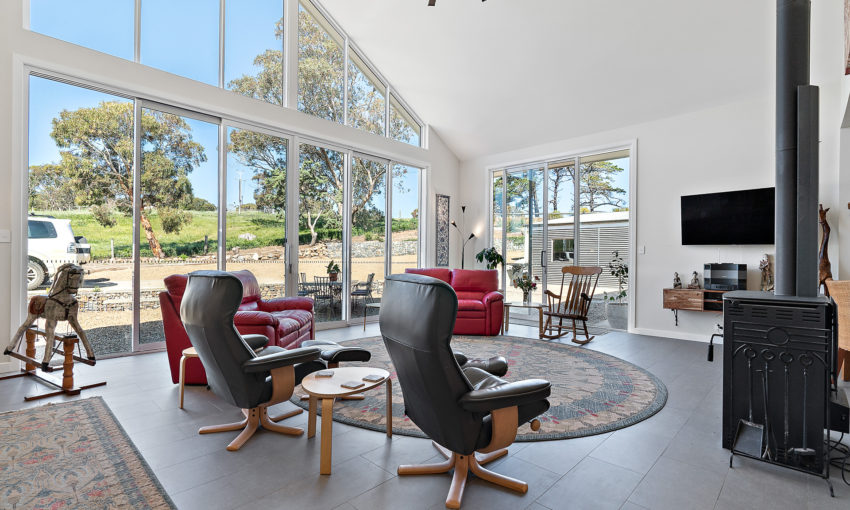 Another perk of the location is the one-year-old craft microbrewery, Forktree Brewing, located in the converted shearing shed next door.

Meanwhile, the character of the original rooms has been maintained, with furnishings and floorboards that are in great condition. With its original fireplace, the period lounge room is a peaceful spot to watch the ever-changing Gulf St Vincent seascape.

“It can really be something else watching the sunsets and the storms, or sitting there in the evenings taking in the stars and the ships on the horizon. It’s wonderful to just watch all the changes in the moods of the sea. It is different every time you look out of the window.”

“We’ll often lie in bed in the morning and just watch the kangaroos,” says Anne, who even discovered an echidna in the house during the renovation work.

A 12 by nine-metre shed provides plenty of room and height for a boat or caravan. There’s also a shed set up as a studio that Anne uses for her craft of making stained-glass windows. The studio is plumbed with both hot and cold water and could easily be converted into additional living quarters or an external kitchen.

The property runs on rainwater, with the tanks having always met their needs, and the grounds are planted out with drought-tolerant shrubs and trees.

“The home is easy to live in,” Anne says. “It’s warm and cosy when it needs to be, or it can be opened up to allow plenty of airflow. We have split system air conditioning, but we hardly need it, it’s very comfortable.”

Landscaping has been done using old stone that was found on the property. The renovation process also uncovered other historic curios, including original redgum beams and fence posts, horseshoes, harness hardware and bottles.

So rewarding was the renovation, that Anne and Andy are now looking for their next project. “We feel that we’ve got another project in us and we just want to do something like this again,” Anne says.

“It’s lovely to put in all this work and see people’s reactions when they come into the house.”

The sale is being handled by Roger Smith and Cody Hanak of Elders Real Estate.