Owned by local builder Hugo Mount, this Uraidla home has been lovingly renovated over the past decade.

To buy the home of local builder Hugo Mount would be like purchasing a fine car from a meticulous mechanic. When you take a look under the hood of this magnificent Uraidla home, owned by Hugo and his wife Rebecca, it’s clear to see this is the work of a master craftsman.

The couple, who operate residential building company Mount Projects, discovered the run-down cottage 10 years ago while hunting for their dream fixer-upper. It was a home they could live in while putting their combined skillsets to work. “We had the plan to realise a personal dream, which was to build a St Peters villa in the Hills,” Hugo says.

With Hugo’s background in masonry and heritage buildings, the run-down cottage had plenty of appeal, despite its dilapidated state. In particular, it was the sandstone frontage and red brick quoins that caught his eye.

“We have added to what was a structurally sound, but not very pretty cottage,” Hugo says. “There was a lot of interest in the property at the time, despite it needing quite a bit of repair.”

The circa 1890 stone cottage is believed to be part of the township’s original settlement. During the renovation, Hugo discovered old newspaper in the chimney as well as a tobacco pipe and matches, which he surmised belonged to the cottage’s original plasterer, who must have knocked them down the back of the brickwork while he was working.

Over time, the owners acquired the heritage materials to build a villa-style addition to the right of the original cottage, with a double window and gable roof.

A stunning modern living addition to the rear complements the home’s traditional elements.

“It’s a light, bright living space with north-facing windows to a rural view, which I quite like,” Hugo says.

“We wanted to be able to see the kids playing from the kitchen,” Hugo says. “The back yard is set up in a way that they can go out and get lost, but not be too far away.”

A freestanding bathtub is a particular novelty — “a swimming pool without the headaches” — and is popular with the children in summer.

The yard was designed by South Australian landscape garden expert Virginia Kennett. “Our landscaping has been very specifically created so that you can enjoy the back yard and the borrowed view, but you can go away for a week and come home and it’s not out of hand. I don’t really aspire to mowing 10 acres every weekend.”

The master bedroom’s stone feature wall is the cottage’s original exterior wall, with the large room providing a parents’ retreat. A similar stone wall was built in the open-plan lounge space, where it radiates the heat from the fireplace.

“The feature wall in the lounge is local Basket Range sandstone, and at four and a half metres high offers quite a good feeling of proportion.”

Hugo updated the original ceiling roses with a uniform design between the rooms, with the fit-out flowing from the front rooms to the back.

The home has beautiful combustion fireplaces and there are 12 hydraulic heating panels throughout the rooms, automated to provide constant heating in the chilly Adelaide Hills winters. “It’s designed to tick over in the background and take the edge off the house. It works really well and you’re not using an air conditioner to modify the air in the house,” he says. 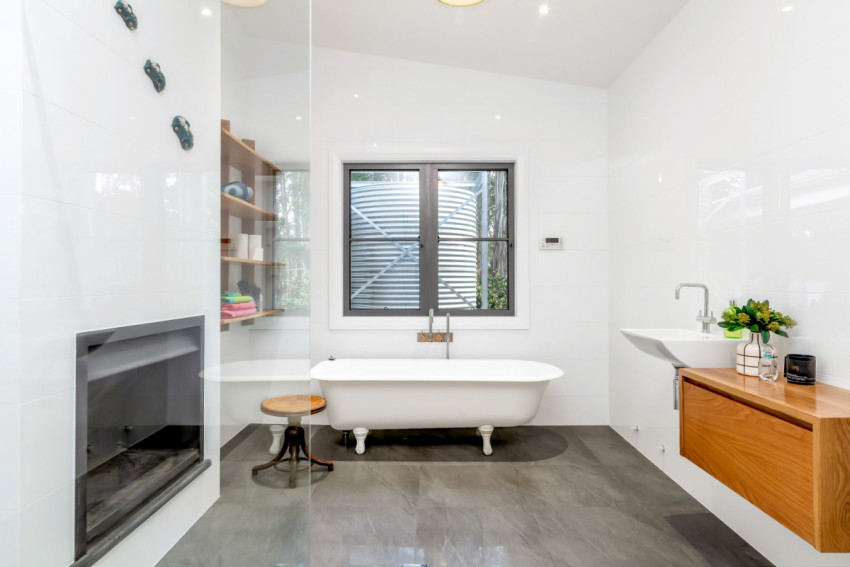 “We like having the fire, but when you come home late after work and you’ve got to cook dinner, you want to light the fire because you enjoy it, not because you have to.”

A fireplace in the bathroom is an original stone hearth from the cottage. “Everyone comments on that. It’s a luxury to have a bath with the fire going, and I think it affords some character to the room, which it needs being a large bathroom.” 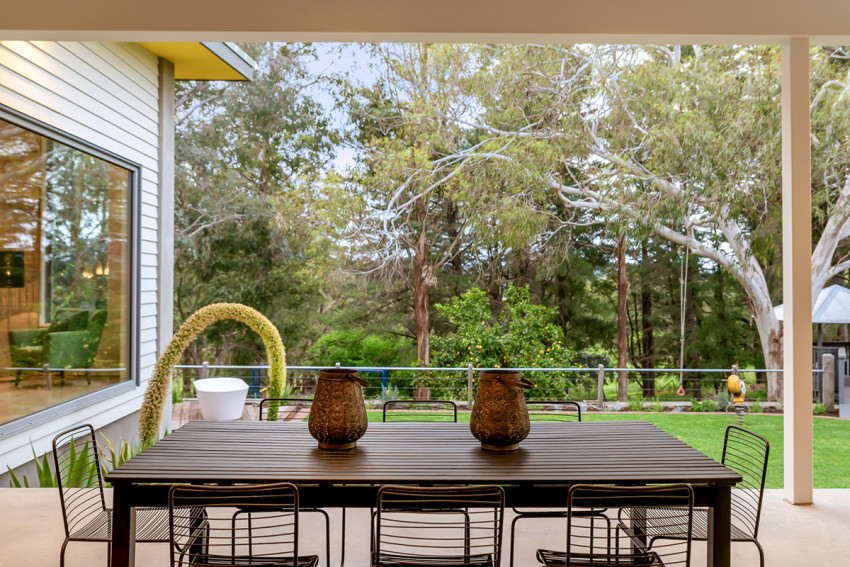 The kitchen is the spiritual hub of the home, with stainless steel benchtops and “golden summer” yellow cabinetry that matches the exterior eaves of the roof. But of most unique interest is a carefully-placed shelving unit, which sees the kitchen become an art gallery of fine glass from all over the world.

“Having young children means you have to find a place for the art where tennis balls are off-limits — so we decided to frame it all in the kitchen,” Hugo says. 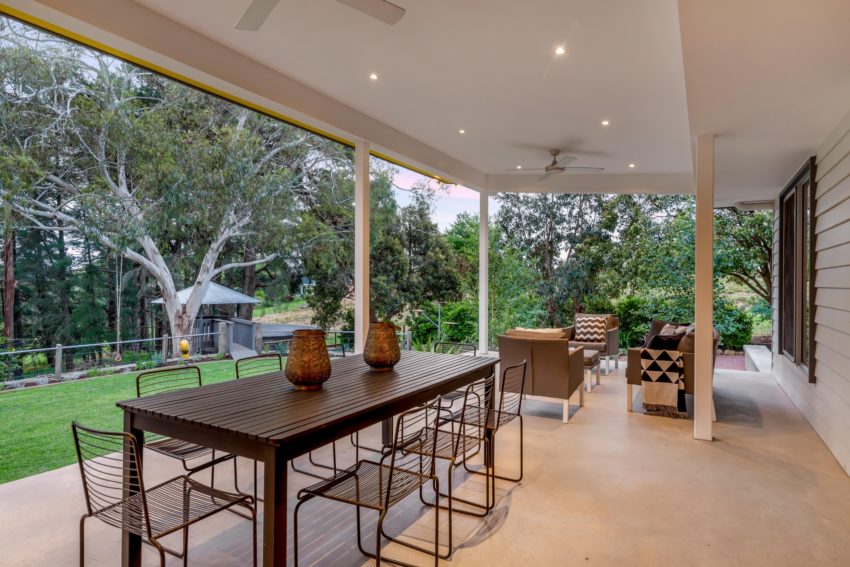 Hugo’s father is renowned glass artist Nick Mount, who has been one of the leading figures in the Australian studio glass movement since the early 1970s.

Nick’s work features in the home, with bespoke pendant lights hanging over the dining room table.

Last, but not least, is the location. “Uraidla has had some great people making big investments in the town, which I always thought might happen. It’s really come alive,” Hugo says.

“We’re now looking for the next project which I think will be of a similar scale, and I hope we’re moving just around the corner.”