This custom-built, four-bedroom Adelaide Hills show home has everything the modern family could wish for.

New foliage has sprouted from the trees encircling the home of Tim and Zoe Adey-Wakeling, as if the season is ready to welcome the next owner of this spectacular Stirling property.

Just a few minutes’ walk from the popular Adelaide Hills town, the driveway of 94 Mount Barker Road is framed by an arch of two beautiful oaks that are “as old as the Hills”, says Tim.

The couple, both medical professionals, enlisted Scott Salisbury Homes to custom build the property in 2013. It was important to keep the trees during the build, as well as some poplars about the same age as the oaks, and an Irish strawberry in the back yard. 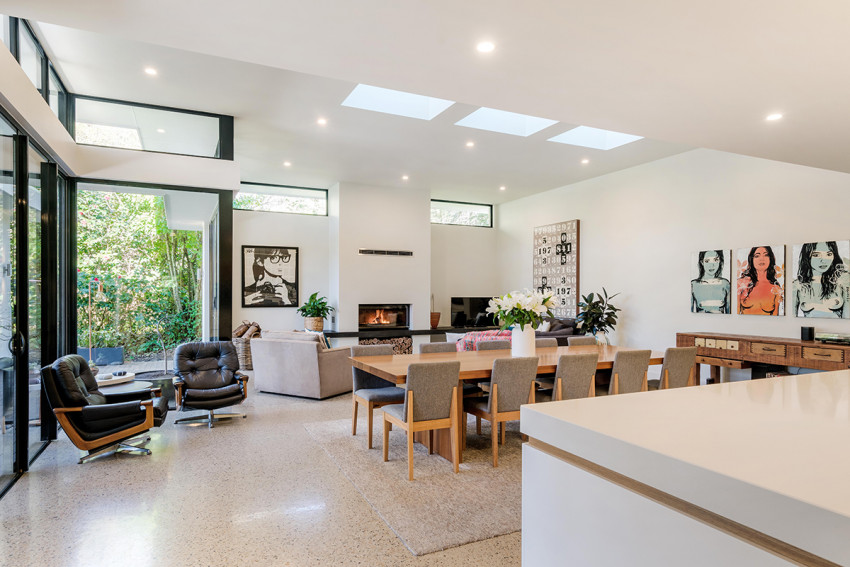 On 1885 square metres, the immaculate bespoke home has four bedrooms, two bathrooms and a two-car garage. It will be sold by auction on Wednesday, October 9 at 1pm.

“The home was designed so that we could wake up in the morning and be surrounded by nature, you very much live in the trees,” says Tim, who has enjoyed watching the seasonal changes throughout the year.

The kitchen features blackbutt timber cabinetry, a smokey black mirror splashback, and a large island bench. The Stonyfell polished concrete runs throughout the large open living area, which is warmed by a combustion fireplace and fantastic for entertaining. There’s plenty of space for artwork, too.

Clerestory windows usher in ambient light, while the three skylights are a favourite feature of Tim’s. “They’re more like windows than skylights — you can sit on the couch and look up and see planes flying over and the stars and the moon, leaves and birds,” he says. 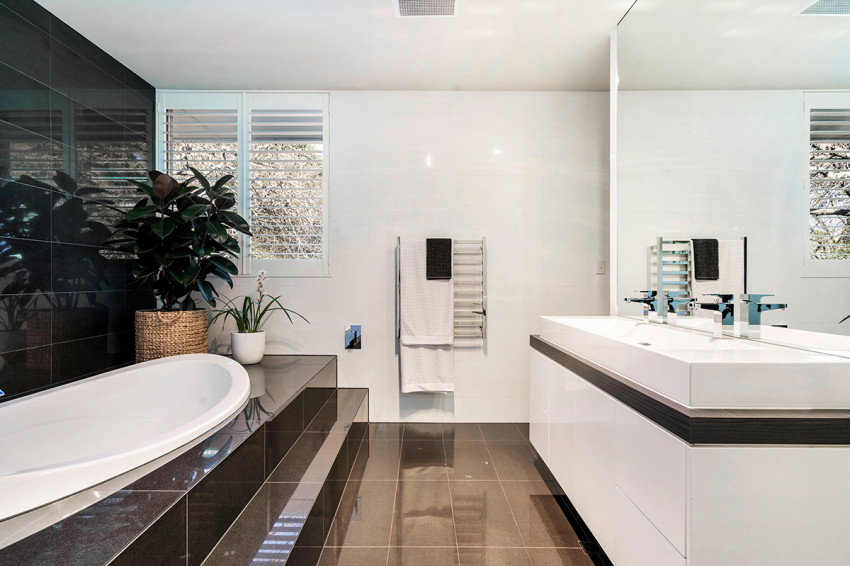 The front door is American walnut and there are other timber highlights throughout the home. The architecture suits beautiful timber furniture. The home is built for the cool Hills climate with radiant ceiling heaters in the bedrooms and extensive glazing to let in the winter sunlight.

“Upstairs is just adult space, with the master bedroom and a bathroom, which was designed to have a resort feel,” Tim says. “There’s a study and all genuine adult space away from the kids. You wake up in the morning to the big oak tree that wraps around the upstairs bedroom.”

The elegant front garden is structured with walls of hand-laid Kanmantoo bluestone, with garden boxes of Corten steel. Meanwhile, the back yard features black granite boulders.

Tim, an emergency department business manager, and Zoe, a rehabilitation physician, met over patient notes at Flinders Medical Centre 10 years ago. The couple and their two sons are moving just down the road to Hahndorf. “It’s such a fun property to live in, we’re just at a point in our lives where it’s time to nestle into something else,” says Tim.

Being from Melbourne originally, Tim says homes of this ilk so close to the city are extremely rare in the eastern states. “In Melbourne, for a house and land of this size you’d be paying four to five million dollars, if you could find one.”

“Adelaide might be the only place in Australia where you can live in the Hills, but only 20 minutes from the CBD. It’s eight minutes to the toll booth. Some days I can be at South Terrace in 13 minutes,” he says.

The home is a four-minute walk from the heart of Stirling, with trendy cafes, restaurants and the Stirling Hotel. “They’re the kind of places where everyone knows each other,” Tim says.

“It’s a really nice community with a lot of professional couples and families. It’s a proper Hills country town that still hasn’t gotten too big for itself, and it can’t because of its fairly tight zoning rules. The number of people who live here is fairly tightly protected.”

“If you haven’t come up to see the colour change in autumn, or the blossoms in spring, you probably should.”

The home has set the backdrop for many family memories and great parties. “I’ll miss being in the trees, that big bathtub and my swing on the front lawn that I made with a piece of walnut. We built the home, so we have an emotional connection to it.”

The sale is being handled by Arabella Hooper & Elle Seaman of Harris Real Estate.