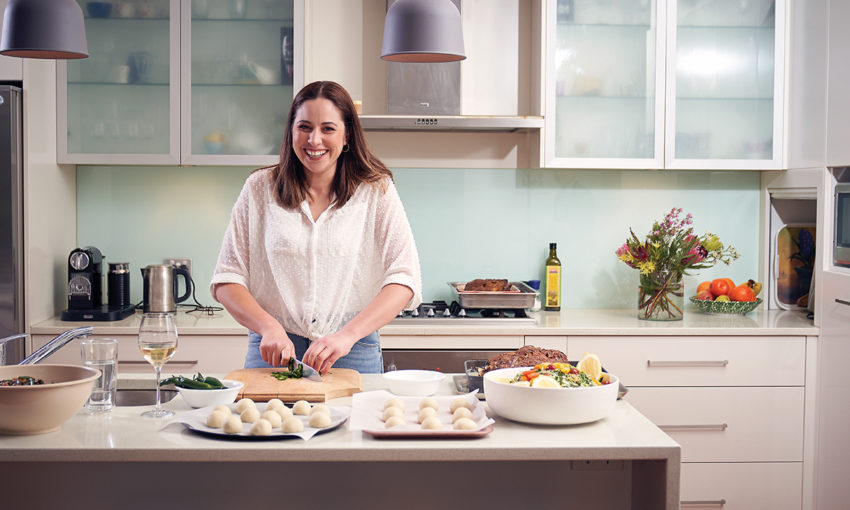 Emma McCaskill has worked in some very impressive kitchens around the world, but nothing beats picking up the knife to make a home-cooked meal for friends and family.

Emma McCaskill tells of growing up cooking with her grandmother and the tastes and smells that would fill the kitchen.

Emma’s parents were both nurses, busy with shift work, so her grandmother Beryl would look after her a lot. As an Anglo-Indian, Beryl opened the door to her culture through cooking. “I was brought up around really amazing flavours and spices,” she says.

While it set a great foundation for her future career, the chef attributes something entirely different to her pathway to food.

“I got into cooking because I used to make weed brownies,” Emma laughs.

“My parents went to work and I pretended to go to school, caught the bus back home and got all these pots and pans out ready to make the brownies. Then I brought them to school – they were really good.”

The chef admits she was a bit of a handful as a teenager. Growing up in West Croydon, she was influenced by the street art at the nearby Kilkenny train station and glass factory.

“That train line and that factory was a hub for graffiti artists; I fell in love with it.”

Emma wasn’t the strongest student – she describes herself as a visual learner – so she knew pretty early on she wanted to launch into a career. She found herself doing work experience at a little art gallery, but quickly found it wasn’t for her.

The other passion in her life was cooking, so she gave that a go and it stuck. Emma did her training and packed up and left for Melbourne when she was 17.

“I saved $2000, packed a suitcase, printed off 200 resumes and moved. For two weeks, I went door knocking and handed in my resume and had no response from anyone.

“I just kept going back and this one restaurant I kept annoying finally gave me a trial – and that was Ezard.”

At the time, it was widely considered one of Melbourne’s best eateries, and the work ethic at the stoves reflected that.

“Those foundations really set me up for the rest of my career. I needed a kitchen like that; I needed mentors like that. I was a brat and I thought I was really tough, then I went into this kitchen where I was at the bottom. I learnt so much.”

The next step was Tetsuya’s in Sydney, where Emma did a week’s trial while she was on holiday.

“I worked so hard during that trial. I got the job but then I had to work that hard constantly. It was my first time in a world-class kitchen.

“It was so intimidating because all I knew at that point was Ezard and I was going into this restaurant that was, at the time, number four in the world.”

As is common with long, demanding hours in the kitchen, the now-35-year-old chef started to feel the burnout. She took a year off and worked for Gourmet Traveller.

“I think it’s really important to take time off and reset; I’ve done it a few times. I need time to stop and reassess and come back fresh with a new perspective.”

The time off gave Emma clarity and a new drive to hone in on her career. She worked in the UK with a Punjabi chef, returning to those roots of her grandmother’s kitchen.

“I think everywhere I’ve worked and every part of my life, I’ve learnt a lot from different restaurants.”

One of the biggest learning curves was when she went to Japan to work at Narisawa. Emma once again found herself in a top restaurant – number one in the country at the time – but she says a lack of preparation backfired a bit.

“I didn’t study any Japanese and I went into a kitchen where nobody spoke English. I had to really watch what everybody was doing and try to pick up on bits of language. It taught me to be really patient with people who don’t speak English when I’m working with them here.”

Emma was in the kitchen from 9.30am until 11.30pm six days a week. While she says she was there to be in that restaurant, it wasn’t going to last for ever. Eventually, she came home and into the Penfolds Magill Estate kitchen.

While working there, she had her two children, Grace and Billie, now seven and five respectively.

“Now, my career has become more about connecting with people and spending time with my kids – it’s not about Michelin stars.”

Then there was The Pot by Emma McCaskill – “I’ll never put my name to something like that again. For me, it became very personal.” – and eventually Sparkke at the Whitmore.

“I got asked to head up the food side of things and I thought, ‘I don’t really want to do a pub’. I had this notion that I didn’t ever want to be a pub chef, but they showed me through the building and I thought, ‘This isn’t just a pub’.”

She was running two kitchens in the 636-seat venue and it was absolutely the place to be. Then COVID hit. Overnight, the business had to pivot to takeaway-only and Emma knew it was her time for another personal reset.

She’d been at the Adelaide Institute of Hospitality doing a kingfish tasting when the manager Ben Sharp suggested she study to become a teacher. Both Ben – a former head chef at The Manse – and Emma attest to the fact that she looked really burnt out.

“I mentioned she should study, and she really followed through,” Ben says. “She’d get in touch every now and then and let me know she was almost done.”

Now, Emma is finding a new kind of fulfillment in mentoring students who want to get into hospitality. It’s a program she says probably would have kept her in school if she’d had access to it.

This is something of a sweet spot: Emma loves giving back, she’s able to be flexible for her children and she’s still exercising her creativity cooking for events around Adelaide.

Emma says she’s arrived at a point in her career where food has become instinctive. “I don’t need to follow recipes anymore. When I cook, I feel very creative and I know how to balance flavours and I know how to make something taste nice.”

Tonight, she’s certainly put that all on the table, at a relaxed dinner she’s hosting for friends and family.

On the menu is freshly fried flat bread, which is currently proofing on the kitchen island. In the fridge are flavoursome dips – taramasalata, hummus and a salsa of fermented tomato, radish and cucumber.

Outside, the Weber is on stand-by for the lamb shoulders, which are waiting for the lick of flames after marinating in yoghurt, garlic, lemon and smoked paprika, before roasting in a low oven overnight.

Emma is completely in control in the kitchen. With so much prepped, the only action is Emma’s friend and former colleague Lee Chia Hao getting into the rhythm rolling the bread.

“Let’s take a moment to feel how peaceful it is in here before my kids arrive,” Emma laughs. The wines have been poured and the Weber is heating up. Then the doorbell rings.

The kids flood in, as do Emma’s guests. The Salopian Inn’s Karena Armstrong arrives with a basket full of fresh herbs and eggs, and a beautiful rich chocolate and liquorice tart.

Emma’s mum Linda recalls the lovely relationship between Emma and her grandmother in those early years. “Cooking bridges the gap between age and culture,” she says.

Emma’s friend Kasim Erkoc is also there. Kasim used to own Celsius on Gouger Street, before he left to take over his family farm. Emma’s been using his fruit and veg for nearly a decade.

The kids have pulled up a seat at the kitchen island, where they’re helping to roll the flatbreads. Emma calls out, “Everyone got a wine?” and drinks are refilled while the guests chat among themselves.

Eventually, the aromas herald the arrival of the lamb, and the chatter dies down as instinct brings everyone to the table.

Among this family setting, it’s easy to see how happy Emma is to be back in her home town.

“I think it’s a great city; I wouldn’t change it for the world. The beauty of Adelaide for me is that it feels like a clean slate. I can make it whatever I want it to be.

“There’s a really amazing new generation of creative people and, because of the size, all of those people can connect together. Being part of [InDaily’s] 40 Under 40 really brought that to light for me.”

Cook quinoa in boiling, salted water for approx 20 minutes or until tender. Strain and allow to cool.
Whisk the lemon juice, Dijon and olive oil together to make a dressing.
Toss the quinoa with all the remaining ingredients in a large bowl. Season with additional salt if required.

Combine yoghurt, ginger, garlic, spices and lemon in a bowl and season to taste. Slash lamb at intervals, rub all over with yoghurt mixture and into incisions, then wrap in plastic wrap and refrigerate overnight for 12 hours to marinate.
Unwrap lamb, place in roasting pan and bring to room temperature (approx 1.5 hours).
Preheat oven to 120 degrees.
Add 500g lukewarm water to a roasting pan, cover with baking paper, then foil and roast until meat is fall-apart tender (approx 12 hours). Pour pan juices into a jug, skim off excess fat and season to taste.
For an extra smokey flavour, once lamb is finished in the oven, place it on its tray, uncovered, in a ready-lit Weber for approx 20 mins.

This article first appeared in the November 2021 issue of SALIFE magazine.

Subscribe now
Subscribe Today! Subscribe to South Australia's biggest-selling magazine, showcasing the best of Adelaide and South Australia. From only $9 per issue
including free delivery to your door.
Share —
More from SALIFE
Wine & Dine

Francis Greenslade, the man of many characters on Mad as Hell, talks university footlights, family life and a desire to play the serious guy.