When you’ve hosted as many parties as Rilka Warbanoff, it’s not surprising they run so smoothly.

Is there a better way to be greeted by your host than with a glass of bubbles upon arrival? Though she’s not big on fizz herself, Rilka Warbanoff always has some sparkling on hand as a welcoming gesture for her guests.

When the clock strikes, Rilka’s guests will all be in her spacious kitchen and dining area. One thing any visitor knows is to always be on time. This isn’t the sort of dinner party that you can stroll into half an hour late and just graze at your own leisure. Rilka’s dinners are set to a strict timetable.

The events run so smoothly because everything is perfectly planned down to the minute details. Guests are at Rilka’s Hahndorf home by 7pm, to enjoy a hot and a cold hors d’oeuvre with their sparkling wine. Half an hour later, entree is served. The main and dessert arrive on schedule, and nothing is over or undercooked.

Rilka says weeknight dinner parties aren’t often thrown, but they’re a great idea. “I do a lot of dinner parties during the week,” Rilka says. “People don’t often get invites and then you’re trying to cram in a lot over the weekend. If you’re going to go to dinner anyway, why not have it in your home? That way people are more relaxed, they come for a couple of hours, they have a lovely time. It’s just like going out to dinner, but it’s a much nicer environment and you’re meeting interesting people.” During the week, the night won’t run too long, but on weekends, Rilka will extend the time allocated for dinner.

The preparation means Rilka isn’t spending any unnecessary time in the kitchen, when she could be mingling with her guests. She’s designed everything so it’s as if the culinary fairies have come along and made it all happen while she’s enjoying the company.

However, when she is in the kitchen, Rilka’s multitasking is impressive. “I can have a dessert in the oven and be putting an entree together. I have ears in the back of my head — I can have five conversations at the same time.” But don’t think any of those conversations will be happening solely on her side of the kitchen. “I hate people helping me. That’s not what they’re here to do. They’re here to enjoy and relax, so I don’t encourage assistants.”

Entire meals are created by Rilka’s internal clock; she can’t work out how to use her oven’s timer. “Smell is the best means of knowing when something is ready. My grandmother used to say, a cake is ready when it smells good.”

Rilka inherited a love of entertaining from her family. Her parents would often invite 30 or 40 people for a Sunday lunch. Her parents were first-generation migrants from Eastern Europe. “Sharing your home and your table was a demonstration that this country had been good to you, that you’d worked hard and done well and you wanted to share it with friends.

“My father would think it would be terribly disappointing if they weren’t still there by 8 or 9pm.” Rilka’s mother would make seven or eight different desserts and a pig would often be cooking on a spit. Rilka’s father would allocate a kilogram of meat per person at each barbecue.

The exposure to those Sunday lunches laid the groundwork for Rilka’s hosting philosophy. “If you actually enjoy company, feeding them is a great way of expressing your love.”

There’s a lot of love in the room for tonight’s dinner. The guests are the Moody family, who own Somerled Wines in Hahndorf. The occasion is daughter Emma’s visit to Adelaide. She’s based in New York, where she is a deputy editor at The Wall Street Journal.

The dinner was also a great excuse to open a bottle of Somerled Reserve Shiraz, with Rob Moody having just celebrated his 50th vintage.

Tonight, there may be fewer people at Rilka’s table than usual — just a modest six tonight — but it’s a lovely homely meal that fits perfectly with the intimate family gathering.

As the Moodys open the door to Rilka’s, they’re hit with the aroma of a chicken, walnut and pomegranate tagine. It’s the perfect dish for tonight — easy to prepare ahead of time and the flavour only develops as everyone enjoys a glass of sparkling shiraz and some crispy parmesan wafers.

The tagine is still bubbling away as the roasted capsicum soup hits the table. Main course is then devoured, but room is saved for the spiced carrot and pistachio cake.

Each dish has been given the tick of approval before it’s set in front of the guests. “I almost always plate my dishes. I don’t do sharing dishes very often. That way, everyone gets a pre-determined portion, and there’s always a green salad at the table.” Rilka says people these days tend to confuse their palates when they go out to dinner, opting to order side dishes they prefer, rather than the ones designed to accompany a main. She always does the choosing for her guests so they’re not bombarded with incompatible flavours.

She may be all for perfect combinations on the plate, but not so much with what’s in glasses. “I actually think this whole thing of pairing actually loses the flow of the dinner and the relaxation of it, although it’s quite different in a restaurant. I’m a great believer that you should drink what you like, rather than what you’ve been told you should have.”

One thing that is consistent — large or small gathering — is the choice of decor. You won’t find pristine white plates, matched with gleaming silverware, set upon a pressed white tablecloth at Rilka’s. The crockery is a delightfully mismatched rainbow, and even the cutlery is a bold punch in yellow, red, green, blue and purple.

Tonight’s guest list was an obvious choice, but sometimes it takes more plotting and planning. There’s a very deliberate, almost calculated, selection on Rilka’s part when it comes to who will be sitting at her dinner table.

It’s not uncommon for Rilka to host a few dinner parties each week, with sometimes 30 or 40 in attendance. Her parties started as a way of team bonding in her corporate life and Rilka has now perfected the art of seating her guests. “My rule is that you never sit with the person you’re going to sleep with. That way, they’ve got so much more to talk about when they get in the car.” 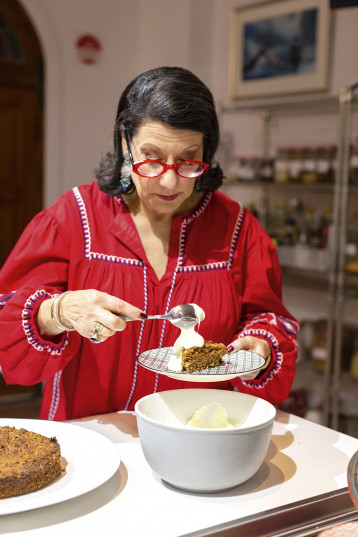 Rilka ponders who she thinks should meet, become friends or do business with one another. Discovering a potential connection is the excuse Rilka doesn’t really need to throw another party.

If it’s a full table who don’t know much about each other, Rilka will often ask each person to say a little something about themselves. Or she’ll be sure to introduce common threads among dining neighbours. Rilka’s parties are always seated; never cocktail-style. To her, there’s something very important about sitting across from a person and having a face-to-face chat.

Where most people promise to catch up over dinner, never quite managing to align schedules, Rilka is the exception who always makes it happen.

Before each party, Rilka thinks not only about the people she’s going to combine to create conversation, but also the theme she’ll base the food around. It can simply be an ingredient, or an entire cuisine, and there’s always a surprise element thrown into each dinner.

Up Rilka’s sleeve is a collection of concepts she wants to try at her table, so she might decide on a whim to invite guests over the following day, and there’s no panic as to what to make. She’d have no trouble being presented with a selection of ingredients and transforming them into something special.

Why does Rilka host so many parties? “I love it. And I believe we need the art of communication. And I like to eat, so I want to cook!”

At the end of a wonderful night with the Moodys, the dishes are cleaned, and Rilka has the table set for the next dinner party. Just around the corner, no doubt.

This story first appeared in the April 2019 issue of SALIFE.

Yindi: The story of a rescue dog

The story of Yindi and us begins nine years ago, with an email and a photo.

Chris Sexton, 52, is an obstetrician, gynaecologist and women’s health specialist who estimates he has delivered 6000 babies over the past 30 years. That number will rise significantly next year, Chris says, with a baby boom on the way thanks to the COVID-19 restrictions.

Bespoke furniture doesn’t have to be high maintenance

There is no use investing in a designer dining table if worrying about ruining it leaves you too scared to use it.