While a good dinner party will be talked about for days, an evening at one of Fatima McHugh's degustations is the stuff of legend.

Five canapes, 11 main courses, and a wine list as long as the dining room table, the menu for Fatima McHugh’s latest dinner party would look at home in the hands of a waiter at a top-notch restaurant. But somehow, hours before guests arrive for this degustation, everything’s ready and the cheerful host has time to put up her feet.

Fatima and Paul McHugh have been hosting dinner parties for more than 10 years and, like any good chef, the ardent foodie continually refines her menu, replacing an item when she finds something new that sparks her interest.

“Formal dining is a fair bit of work, but I love to cook and my husband loves wines so he does the wine matching; it works well,” Fatima says. “Sometimes we’ll have friends over for a casual dinner, but when you use the dining room it feels quite special.”

Having grown up in Hong Kong, Cantonese food is Fatima’s forte, but she has developed a love of the South East Asian flavours that permeate South Australia’s restaurant scene. Tonight’s menu is a mixture of Chinese, Thai and Indian, with a dash of Japanese.

Having never experienced one of Fatima’s feasts, her six guests are in for a treat. The couples met by chance when they were seated together at a Tasting Australia event two years ago, hitting it off over their shared love of food and wine. The conversation had to be interrupted when they were politely told the restaurant was closing and they were the last to leave.

The couples have been duly warned that Fatima’s dinner parties often run well past midnight; there is no closing time here. Guests arrive and Paul, a periodontist, efficiently does the rounds with Champagne with the kind of perfect pour you would get from a sommelier, while everyone becomes reacquainted over canapes served by son Liam. “We only get to catch up a couple of times a year, so we have plenty to talk about,” Fatima says.

Medical professionals Kathryn Hudson and Stephen Rodda first met while working in the same laboratory early in their careers as biologists. Today, Stephen is an executive at Adelaide University and also chairs the board of the Hospital Research Foundation, while Kathryn manages the research program at the Queen Elizabeth Hospital.

Kathryn says the group gets along like a house on fire. “The conversation flows freely and we enjoy getting together with good food and wine — Fatima certainly provides that,” Kathryn says. “Cooking is similar to a science experiment, because you have to mix certain compounds together at the right time, let them incubate and assess the results.”

Eight places are beautifully set with cutlery and chopsticks. “Eight is my ideal number because you can have one conversation for the whole table,” Fatima says. “Any more and you have to start doing two share dishes for the table — that’s a lot of extra work.” The dining room is adorned with artwork, particularly the quirky glass art of renowned local artist Tom Moore, with the couple being avid supporters of the Art Gallery of South Australia, JamFactory and the Helpmann Academy.

Headlining the canapes is a recipe Fatima picked up during a cooking class with chef Andrew Fielke: tuna with saltbush dukkah and smoked yoghurt. The Thai chicken balls are a family favourite, with Fatima often having some in the freezer ready for her son or daughter to heat up anytime, and the pork won tons are based on a fun recipe Fatima would whip up for her children’s school classes many years ago.

It’s no coincidence that the menu and table setting feels like a restaurant, with Fatima gaining inspiration from top eateries in Adelaide and Melbourne. “We love dining out and if there’s a dish that I like, I try to draw inspiration,” she says.

The main course starts with a bang, as the plate of kingfish sashimi hits the table and sets the standard for what’s to follow. With his steady hand, it was Paul’s job to finely fillet the kingfish, chilli and limes. He has matched this dish with a 2007 Grosset Polish Hill Riesling.

This recipe is straight out of the cookbook of Melbourne chef Benjamin Cooper, of Chin Chin. “It’s a really lovely dish,” Fatima says. “I’ve given the recipe to friends and they’ve prepared it at home. Often people who don’t like to eat raw fish really enjoy it because the citrus somewhat cooks the kingfish.”

Fatima’s extensive preparation the day prior, including a visit to the Adelaide Central Market, means she has minimal work to do for each course and spends much of her time with guests at the table. Kathryn is in awe of Fatima’s ability to serve up an incredible menu, without ever looking flustered.

There’s still plenty to come both in fine wine and food, with a Cheong Liew recipe for steamed Atlantic salmon, steamed pumpkin from a Neil Perry cookbook, and then Brussels sprouts and beef madtarbak, which Fatima ingeniously heats up in a sandwich toaster.

After a zucchini and Rogan Josh dish influenced by Hentley Farm chef Lachlan Colwill, then curried beef cheeks that have had more than a day to infuse in a pressure cooker, it’s time for dessert.

From The Dessert Diva by Christine Manfield, Fatima has made her own Pedro Ximenez and chocolate ice cream, frozen into perfect domes and served with decadent homemade honeycomb and chocolate almond crumb. The perfect finish.

“I was once speaking with Lachlan Colwill at a cooking class and he said you can make the honeycomb, freeze it and take it out on the day. It works! It doesn’t taste frozen, it tastes freshly-made. That’s perfect because I try to do as many things as possible beforehand, which makes it easy and I can enjoy the evening,” Fatima says.

After an evening that has felt a like a round trip to some of the best restaurants in Adelaide and Melbourne, along with a top-notch wine flight, it’s time for guests to depart and release their babysitters.

For Kathryn, it was a shame to leave. “All that amazing food didn’t stop coming until after midnight,” she says. “Fatima was such a consummate host and the dishes were incredibly flavoursome, building throughout the night like a perfect menu should.” 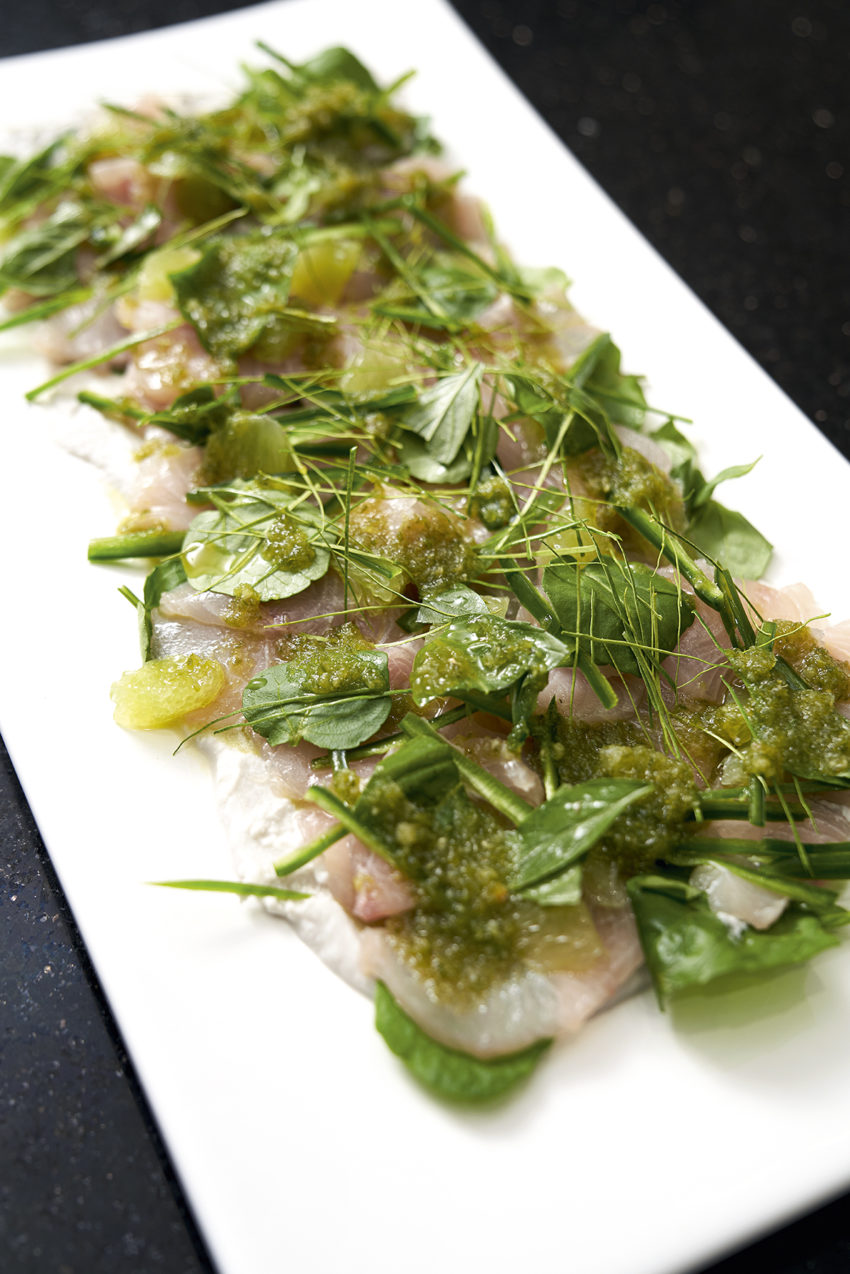 Drizzle the coconut cream over a serving plate. Lay the fish flat on the plate, spreading it out slightly so each piece is only just touching.

Layer the rest of the ingredients. Start with the lime, gently breaking it up and scattering it over the fish. Next comes the green chilli and lime leaf.

Drizzle the nahm jim, being sure to spread it evenly around the fish. Finally, add cress and torn basil. Serve immediately. If you leave it too long the nahm jim starts to cook the delicate fish.

Blitz or pound chillies, garlic and coriander root to a fine paste. Combine with remaining ingredients and a large pinch of salt, ensuring sugar dissolves.

This story first appeared in the Dec 2019/Jan 2020 issue of SALIFE magazine.

“I never really left the world of make-believe”

Geoff Cobham is the artistic brain behind some of SA’s most awe-inspiring creations – Adelaide Festivals, mind-bending light shows and now Patch Theatre. His partner, Restless Dance Theatre’s Roz Hervey and their daughter, actor Tilda Cobham-Hervey, share his love of the arts.

We track down some more South Australians living overseas. Here are their stories.

Designed by architect Max Pritchard and capitalising on spectacular views of Myponga’s hills and coastline, this award-winning rural property is expected to fetch around $1.5 million.