After more than a decade living in Hong Kong, Amanda Hayes has honed her love of Asian flavours, weaving them into her cooking.

The Asian influences are obvious as soon as you walk into the home of Amanda Hayes.

A bright yellow Chinese medicine cabinet with tiny drawers labelled with Chinese characters sits in the entrance hall and a print, titled “Water Village II” hangs above it. It is by Wu Guanzhong, the artist recognised as the founder of Chinese contemporary painting.

There’s also a wooden sideboard painted with scenes of Chinese landscapes and, in the living area, an antique wedding chest is now used as a drinks cabinet, along with several more Asian artworks. It’s a warm, inviting space with a crackling fire and scented candles adding to the ambience.

Amanda lived in Hong Kong for 11 years and her husband Chris still lives there, working as a corporate lawyer, and visiting when possible. Amanda now holds the fort at the family’s Kensington Gardens home with children Jeremy, 18, Eva, 16 and May, 14. It’s a busy household with lots of teenagers coming and going.

Luckily, Amanda loves to cook and her meals, like her home, reflect her time in Hong Kong and her passion for Asian flavours.

“In Hong Kong, you can eat at a noodle shop on the street for a couple of dollars or you can go to a fancy French restaurant. There is every kind of cuisine, which means there are a lot of ingredients as well,” she says.

“So, during my time there I got quite interested in Indian food and did some Indian cooking classes. They had some fabulous Indian restaurants that were a bit different to what you get here … a fresher take on it. Obviously, the Chinese cooking is excellent so I learnt how to make dumplings as well.”

Having a large kitchen with plenty of bench space was a priority for Amanda when the couple undertook a renovation on their 1925 home six years ago. 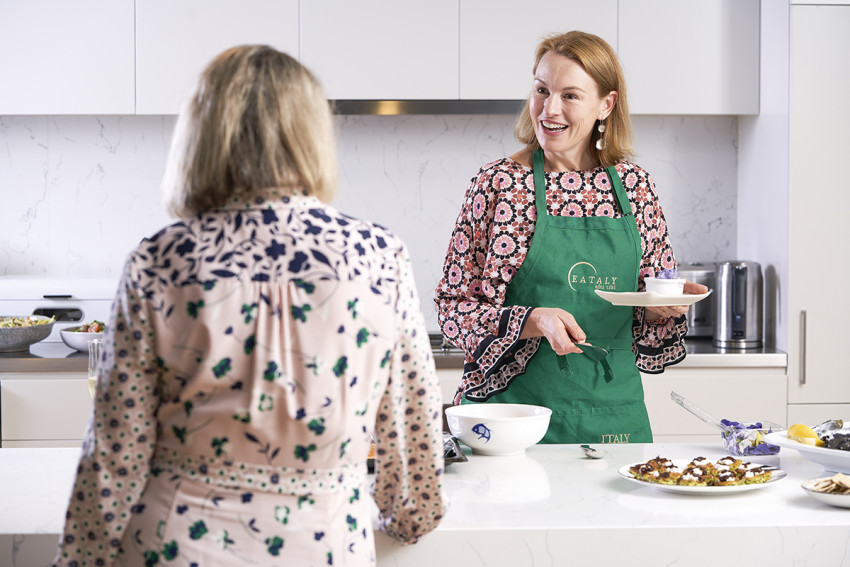 They enlisted local architect Helen Vaughn to open up and modernise the home, while landscape architect Mark Barnett redesigned the expansive garden, with a veggie patch a must and plenty of outdoor space for teenagers.

“After living in a small apartment in HK the things I wanted most were a bigger kitchen and a space for the children to be with their friends here, so we had the pool put in and the pool house, which has sofa beds and acts as a second living area.

“Most importantly, though, I wanted a garden. What I enjoy most about our house is the garden. After the renovation, the garden was an unloved mud patch with no structure and some ugly concrete paths. Mark completely transformed it. The front garden is a more formal style with hedges bordering the garden beds and lots of roses and the back has our vegetable patch, fruit trees and a more unruly natives section, which is what I wanted.

“The garden brings me so much pleasure. I am definitely a gardener with L-plates on — we have had some great success and notable failures with our vegetable patch.”

Utilising homegrown produce was paramount for Amanda when planning tonight’s menu. She says at this time of year the crop is not great but she has used lemons, mandarins, rhubarb, rocket and chilli throughout the three-course meal.

Guests at tonight’s gathering include long-time friends Miriam and Joe Whitford, Jayne and Paddy Taylor and Bridget Alfred and Tony Keenan who gather around the bench and begin tucking into the mini zucchini fritters with goat curd and caramelised onion and oysters, sipping on the Veuve Clicquot bubbles.

The dragon-etched wine glasses are from one of Amanda’s favourite shops in Hong Kong, Shanghai Tang, and the table setting is finished off with colourful vases of proteas and cute name tags tied to sprigs of rosemary.

Guest Miriam says dinner cooked by Amanda is always outstanding and “she always reminds me how important it is to be healthy”.

Amanda is absolutely driven by healthy eating and living well. After 15 years working as a lawyer in both Adelaide and Sydney, she began looking for a career that would encompass her fierce interest in physical and mental wellbeing. She decided to study a Masters in Nutrition, which she completed 18 months ago.

“It took me six years part-time,” she says. “But the things that drove me to study were health-related because I’m really interested in healthy eating and wellbeing generally.

“Sports nutrition is also something I’m passionate about. I wanted to learn about the science of wellbeing and nutrition because I think there’s a lot of misinformation and half-truths out there and it’s confusing.

“It’s made me more critical of information in the popular press about miracle diets or whatever because facts can be cherry-picked from scientific papers and taken out of context. It has certainly made me a more discerning consumer.”

An extension of this deep commitment, Amanda launched her own podcast in January this year: Amanda’s Wellbeing Podcast. She has interviewed experts in the field of nutrition and physical and mental health. She also does a segment called Five Minute Food Facts where she covers topics such as sugar or antioxidants, explaining the facts and issues around them.

It was through her other podcast, Books on the Go, where she discusses books with friends Anna Baillie-Karas and Annie Waters, that Amanda learnt how to put a podcast together, but she admits it’s all been a bit of trial and error.

Amanda’s says her love of food and entertaining was inherited from her mother Janet, who she remembers as always reading a Gourmet Traveller magazine.

“My mum is a very good cook, a much better cook than I am, and an excellent entertainer — it just comes naturally to her,” she says.

“Mum used to make really great Thai curries before there were Thai restaurants around and she would make the curry paste from scratch. She used to make a northern Thai dish called khao soi, which was a favourite, and another favourite was her golden syrup dumplings which my children now love.

“I also remember tasting a mango for the first time 40 years ago when they weren’t very common in Adelaide and also what a specialty it was to have avocado.”

Her parents Janet and Michael would often entertain and Amanda has childhood memories of the glamorous guests arriving, the special cutlery and crockery being brought out, and she and her sister Sally scurrying into the formal dining room the next day looking for leftover after-dinner mints.

Like her mum, Amanda loves to entertain on weekends when she has the time to plan and prepare, as a contrast to the everyday “what’s for dinner mum?” routine.

One of her tips for a successful dinner party is to make meals you know well, not a dish you’ve never cooked before.

“I did that once in Hong Kong,” she laughs. “I made a beef dish for the first time and I had to flambe it and there were flames going everywhere. The meat was tough and awful, not that anyone complained but I knew.

“I thought, why did I do this? Why didn’t I do something tried and true?”

Amanda also confesses she can be “a bit of a nerd” when it comes to hosting dinner parties and has been known to do a running sheet for the night.

“It will have what time I need to prepare things or put various things in the oven,” she says. “Nobody wants a three-hour gap between entree and main because the host forgot to put the main course in the oven.”

Her healthy eating is also tied into her commitment to regular exercise and running. She has a running coach and completed a Half Iron Man in Cairns earlier this year and is currently training for the Yurrebilla 56K Ultra running event in September. Then she and sister Sally will trek to base camp at Mount Everest in November.

“I’m not a naturally talented runner but I love it. I love trail running and being outside in the bush, it just clears your mind,” she says.

“I want to eat food that assists with running and I also want to be a good role model for my children and provide them with a healthy attitude towards food. I’m not perfect but they don’t have packets of chips in their lunch box.

“But I also never want to be too definite or prescriptive about food because I think sometimes it can create real issues if you try to forbid your children from eating chips or chocolate, because those things are social and fun. They can have them, but not all the time.”

As the guests tuck into their dessert of roast rhubarb with coconut custards and candied mandarin peel, Amanda looks relaxed and pleased with the night’s events.

“My favourite thing is a night with friends over dinner,” she says. “To me, cooking for your friends is a real sign of love and appreciation. It’s a joy.”

This story first appeared in the August 2019 issue of SALIFE magazine.