Happy holidays: 25 wineries to visit on the Fleurieu Peninsula

Indulge in a little wine tasting as you holiday around the Fleurieu this summer – and why not stop for lunch?

Established in 1891, Kay Brothers is the oldest winery in McLaren Vale still in the hands of the founding family. The Kays specialise in traditional red wines, producing full-bodied, fruit-driven drops of shiraz, merlot, grenache and muscat blanc to name a few. The heritage-listed winery and cellar door boasts panoramic views of the rolling hills and offers complimentary tastings for groups of less than 10 people.

Angas Plains Estate Wines is one of the spots not to miss in Langhorne Creek. The alfresco area offers views changing with the seasons as wines are matched with a range of country dishes inspired by local produce. Finish with organic coffee and scones and jam made on-site. Open Thursday to Monday 11am to 5pm, bookings are recommended for larger groups.

McLaren Vale vines are brought to life by Zerella Wines’ boutique winery, with a cellar door brimming with love and history on Olivers Road. The small-batch artisan winery is all about family as the Zerellas build on their long history in farming and viticulture that has roots back to 1920s southern Italy. Since their migration to SA, four generations have built on their passion for the label with locally grown Italian varieties including fiano, barbera and nero d’avola.

This boutique winery has grown to become a must-visit in the Fleurieu. The Folletts have been farmers at Langhorne Creek since 1880 and grape growers since the 1930s, producing consistent wines and adding charm to the experience with their cellar door and upstairs decking. Each November, Lake Breeze Wines also hosts the Handpicked outdoor music festival, which draws big Australian music names to SA, with more evening markets, events and live music throughout the year. The cellar door is also a destination for weddings and parties.

At Beach Road Winery and Restaurant, wines are made to be enjoyed with food, family and friends in a fun and relaxed environment. Beach Road’s most popular drops are their Italian varieties that were some of the first in Australia, and now the purpose-built winery produces many different varieties, priding themselves on offering alternative styles fuelled by their never-ending curiosity. Visit the lush and shady cellar door to delve into their label and enjoy the wood oven pizzas or sangria.

Home to the Zonte’s Footstep cellar door, The General at McLaren Flat is a new generation of general store. Originally built in 1910, the building has evolved over the years to now become a hub for locals, with warmth and character in the exposed brick and beams, bar and leather bench seating. Bookings can be arranged weekdays by appointment and the wine bar is open from 11am to 6pm Friday and Saturday.

Marking 125 years in 2019, McLaren Vale favourite Wirra Wirra has something to celebrate – and celebrate they will, with a “Festival of Wirra Wirra” planned for August 2019 and the release of a special anniversary-themed wine. The ironstone winery, with its church bell and “woodhenge” timber fence continue to deliver textured McLaren Vale reds and cool climate whites. Alongside the free tastings at the cellar door among the gum trees, sample something to eat at Harry’s Deli providore and cafe, or take advantage of the regular tours of the winery. Wirra Wirra have also recently partnered with Greaton to build the region’s first five-star integrated winery and accommodation resort. 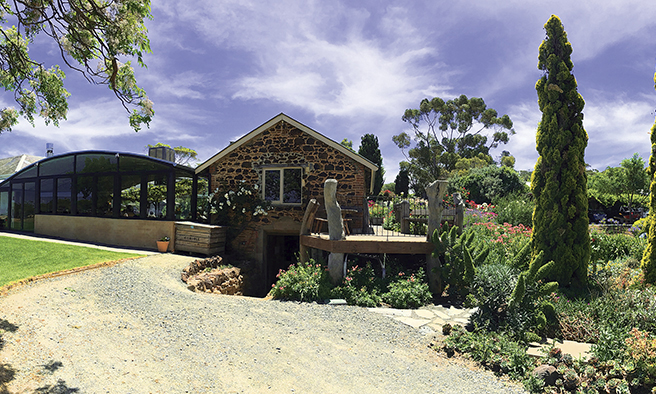 Celebrating its 50th birthday in 2019, Coriole vineyard and restaurant sits on the sea view ridge of McLaren Vale, steeped in the region’s wine history producing estate-grown shiraz and cabernet. Since the 1980s the winery has pioneered a range of Mediterranean varieties including sangiovese, fiano and picpoul. Nestled in between the 1850s homestead and barn is Gather, a restaurant focusing on bringing seasonal, locally-produced and foraged ingredients to the plate for a relaxed, grazing style setting.

When Serafino “Steve” Maglieri arrived from Italy in 1966, he and his father Giovanni planted the first vines that would become the current 121-hectare vineyards at Serafino Wines. Today, the grounds include a cellar door, four-star accommodation, function and conference centre, and restaurant, and continue to host some of the biggest food and wine festivals in the state.

Mt Jagged Wines is a small, family-run vineyard tucked between Victor Harbor and Mount Compass. The quaint tasting room, perched on a hill where chickens and kangaroos roam free, is a cosy, relaxed and eclectic space where visitors can take pleasure in their nine cool climate wines, accompanied by a roaring fire in the winter months. The Honey Myrtle Chardonnay and Pink Heath Sparkling Pinot Noir are recommended, and children will also be entertained with toys, games and lawn for a relaxed afternoon.

There are few cellar doors in South Australia that have as rich a history as Chapel Hill, and in such beautiful surroundings. Chapel Hill Winery is named after the property’s ironstone chapel, built by Methodist settlers to the McLaren Vale area and officially opened on December 5, 1865.  It served as a place of worship, school and social gathering spot for local farming families for a century. The chapel is now part of the on-site art gallery and home of the Icon Tasting – a hosted, seated tasting of the four flagship red wines, matched to locally sourced food.

The alphabet of wine is being explored at Alpha Box & Dice, where an experimental project by head winemaker Sam Berketa has grown into an established hangout spot in McLaren Vale. Fans of the quirky are lured to their modern takes on classics, each drop assigned with their own letter, with every wine produced as a small batch, with minimal intervention and vegan-friendly techniques. This year sees the arty focus expand with upgrades to the cellar door, a few new “letters” being added to their alphabet and extension of the Alpha Box & Dice Wine Club.

One of the wineries that make McMurtrie Road a destination in McLaren Vale is the ultra-modern Mitolo Wines. The tasting room and Bocca Di Lupo restaurant are set in the striking architecture of 10 shipping containers linked by large windows, making the most of the views. A new a la carte offering has lavished the menu with gourmet ingredients, from appetisers to a streamlined seven-course degustation, designed to be enjoyed with a hand-picked selection of their eclectic wines. This year also sees Mitolo’s first Adelaide Hills release of pinot noir, available exclusively from the tasting room.

S.C. Pannell was established by Steve Pannell and wife Fiona in 2004, but Steve’s journey to winemaking dates back to 1969, when he spent his early years on one of Australia’s most iconic boutique wineries: Moss Wood in the Margaret River. The Olivers Road cellar door has been awarded for its experience as visitors are taken through the extensive list of wines and enjoy the modern Mediterranean-inspired lunch menu.

Storybook charm awaits at Penny’s Hill Wines, with shady trees and stone buildings offering Penny’s Hill estate wines, as well as Thomas Goss and Black Chook wines. Couches, a fireplace and an art gallery round out the experience, or take a wine outside to the lawns, to be entertained by outdoor games, and the resident chooks and sheep.

An architectural icon of the area, the d’Arenberg Cube offers an experience and journey into the label and the mind behind it, tempting every sense for an adventure. Inspired by the complexities and nuances of the winemaking craft, the centre includes a wine sensory room, a virtual fermenter, 360-degree video room, Alternate Realities museum and art installations. The restaurant offers a seasonally changing degustation menu, Chef’s Table and tasting room with group experiences, premium wine flights, blending and masterclasses. Entry $10.

Shottesbrooke Vineyard is now hosting regional experience tours on site, to go behind the scenes of the winemaking process. Follow the journey from vineyard to bottle, taking in the day’s activities from geological insights, harvest, pressing and maturation from the winemaker and guide, while enjoying a number of tastings and a three-course lunch.

Family owned and run Paxton Wines takes visitors into their home. For four decades, the Paxtons have nurtured their McLaren Vale vineyard into a range of biodynamic and organic wines, on show at their cellar door with views to the Willunga hills. Last year saw the addition of the Paxton Wine Tasting Bar located on Oliver’s Road, open Fridays and Saturdays as a pop-up bar among the vines.

A pillar of McLaren Vale since 1973, Woodstock Wines captures the essence of the region in a bottle. Woodstock’s Coterie restaurant has updated its a la carte offerings and visitors of all ages can see the daily wildlife feeding at 11.30am. Woodstock is also looking to the next generation of the Collett family for more exciting things to come from the label.

When they took over the vines at what is now Battle of Bosworth estate in the 1990s, Joch Bosworth and wife Louise Hemsley-Smith converted the 24-acres of shiraz, cabernet sauvignon and chardonnay to become completely organic. Now their Battle of Bosworth wines have grown to also include the Spring Seed Co. wines, which can both be sampled at their Willunga cellar door.

Bremerton Wines is set in a restored 1866 stone barn among the vines in Langhorne Creek. Rebecca and Lucy Willson became the first sisters in the country to run a winery and have created a premium wine experience and a welcoming sense of place. Sip the range of 13 wines in their alfresco dining area or on the lawns with a picnic, sharing in gourmet platters.

Owned and run by the fifth and sixth generations of the Oliver family and nestled in an 1850s workers cottage, the Oliver’s Taranga cellar door is open 10am to 4pm, seven days a week. Structured tastings are available by appointment, but the famous monthly Porchetta Parties are worth marking the calendar for, as well as the home-grown Flamboyant Lamb Party taking place in October and Beef Party in mid-July and December, which sees the label partner with 36 Degrees South Beef for a fine four-course lunch.

One of the oldest working wineries in the greater Adelaide region, Beresford Estate grew from beginnings in Happy Valley to a large Langhorne Creek base, before returning to McLaren Vale with a new tasting pavilion. Their handcrafted approach to wines is at the forefront of this new home, when they describe as quintessentially McLaren Vale.

Taste wines from two labels at the Leconfield Wines McLaren Vale cellar door, with the Leconfield brand and Richard Hamilton Wines. The sprawling grounds of Leconfield have made it an ideal venue for events including A Day on The Green, as well as weddings, concerts and various food and wine celebrations. Also on the calendar this year are events from the Holden and Falcon car clubs, the Masters Games archery competition in October and smaller, community events. The property is even a landing point for local skydiving experiences. The McLaren Vale cellar door offers popular ploughman’s and wine taster platters, made with produce from around the region, daily from 11am to 3pm.

This story first appeared in the SALIFE Food & Wine List 2019.

Erik Thomson has stepped away from his funny dad persona to embrace his latest role as a maladjusted, moody chef. Here, he talks television, family life and his love for the Fleurieu.

“My dad divided up all our family photos into nine boxes”

FEATURE PROPERTY: Modern mansion at Beaumont has it all

Spread across three levels with sweeping views of the foothills, this multi-million-dollar entertainer ticks all the boxes with a heated pool, terraced landings, cinema room and a new vehicle workshop.