From paddock to plate at the Watervale Hotel

Chef Nicola Palmer and winemaker Warrick Duthy are the couple behind the beautifully-refurbished Watervale Hotel, with meals featuring produce grown just down the road on their biodynamic property Penobscot Farm.

As told to Ben Kelly

BEN How did you and Warrick end up taking over the Watervale Hotel?

NICOLA We had actually decided to go to the hotel for dinner one night. We had just contracted to purchase a property in Watervale, so we were already moving to the town. Warrick went up to pay the bill and the publican had heard we’d bought the house and joked that we should have purchased the pub instead. So, Warrick asked how much they wanted for it and we shook hands that night. We could both see the potential in the building and really wanted to make it a tourism beacon.

BEN Tell me about Penobscot Farm and what do you grow?

NICOLA Within three weeks of moving into the farmhouse we found our head farmer Jared Murray of Green Living Permaculture and it was all go from there. The farm is run organically and biodynamically under the principles of permaculture, which is all about variety of what you’re planting and letting plants go through their full flowering cycle for the soil, the bees and the pest control. The flowers and leaves end up in our salads. Jared’s philosophy has been to put soil health and vitality first – productivity, flavour and nutrition will follow. 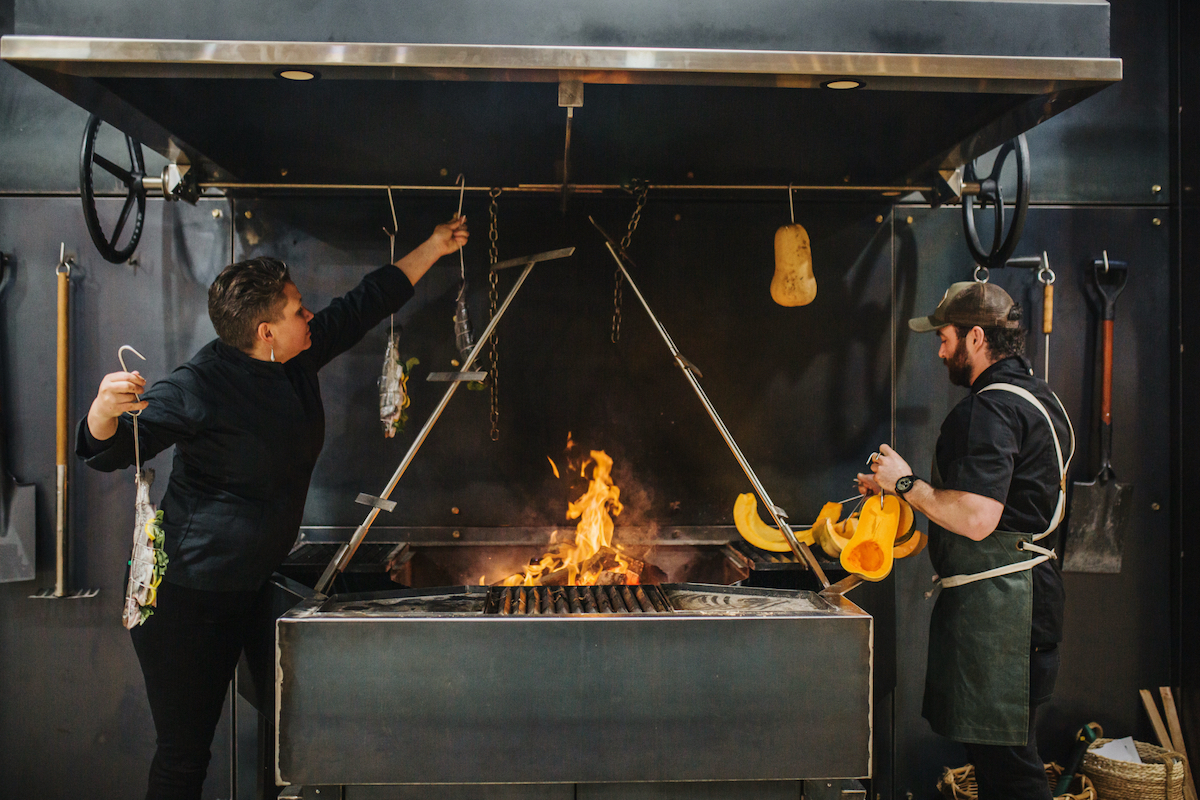 BEN Has running the farm changed your approach in the kitchen?

NICOLA Absolutely. We chose not to sell our vegetables to other venues and, as chefs, we prefer to learn to react to the abundance of the seasons. But that’s very difficult when you get 46 kilograms of eggplants on a Monday, or 180 kilograms of apples that need to be picked off of one tree. It’s about processing them into other forms to be used over coming months. It’s amazingly challenging, but really enjoyable. The chefs must respond to the farm, rather than have the farm managed by the kitchen.

BEN What have you learned along the way?

NICOLA The biggest learning for me as a chef has been how much of the products that are edible that we don’t see on the supermarket shelves; how much of plants are wasted. At the pub, we already do nose-to-tail with our meats, but we’re aiming to do that with all our plants as well. Our philosophy is to enhance the natural flavours and to produce genuinely nutritious food.

BEN What else have you planted?

NICOLA We have a herb garden and about 200 fruit, nut and berry trees, but they’re only three years old. We already get maybe 400 kilograms a week of product off of our farm, and I had this scary thought last year that my life is forever going to be processing fruit! We have planted for variety, with different colours, flavours and ripening times to ultimately get variation on the plate.

BEN Why does the hotel have a jail?

NICOLA It’s the oldest pub in the region and was first licensed in 1847 as the Stanley Arms Hotel. The town later lobbied to get a police station but they instead built a jail at the back of the hotel, known as the Hellhole, which we’ve renovated and opened for private dining. When it all came together it really was a beautiful surprise.

NICOLA Part of our ethical stance is using waste meat and bones, so we are dog friendly with dogs allowed on a leash on the verandah or in the beer garden. Our dog Frankie has been a key taster for the menu. He greets visitors to the hotel and even his tag says Marketing Manager of the Watervale Hotel.

This story was first published in the May 2021 issue of SALIFE magazine.