While most of the state is still sleeping each morning, families in the fruit and veg industry are continuing a market tradition that has been handed down for 145 years.

With apples fresh from their local fruit farms, Ceravolo Orchards’ Ralph Ceravolo, Nick Vinci, Matthew Agostino and Tony Ceravolo enjoy the camaraderie that comes with working in the produce industry.

It is not quite 7am when the pink hues of sunrise creep over Pooraka as the hum of fruit and vegetable growers, buyers, forklifts and trucks starts to abate after another morning’s trade at the South Australian Produce Market.

It’s a familiar scene for Ralph Ceravolo, 77, who has been coming to market for more than 60 years. He still rises at 2.30am, six days a week, to front-up at Pooraka and sell produce with his son Tony at the Ceravolo Orchards storeroom.

By 4.30am the market’s large car park has filled with hundreds of trucks — provedores and independent grocers buying their fresh produce for the day ahead. It’s all-hands-on-deck for the Ceravolo team, with seven forklifts going at once, swiftly moving pallet-loads of orders out to the buyers. By the time the sun rises, the Ceravolo boys have sold about 100 pallets of fruit and vegetables in what feels like the blink of an eye. 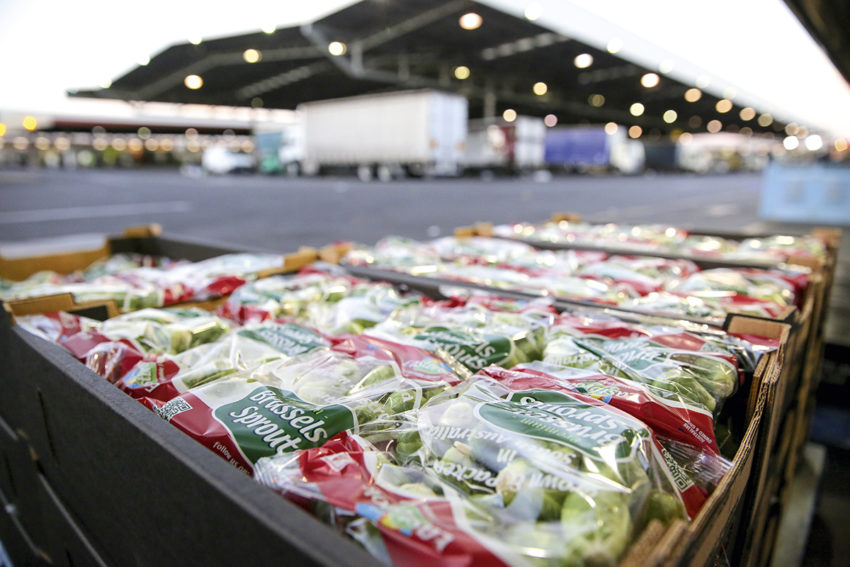 It’s busy work, but there’s plenty of banter and the markets run on caffeine. “To get up in the morning and go to market at 77 years of age, you’ve got to enjoy it, otherwise you wouldn’t do it,” Ralph says. So long-held are the relationships that the market is Ralph’s second family. “We’ve become very close. I’ll have a coffee with friends that I used to go dancing with when we were 20 years old,” he says.

After market, the great-grandfather stops at home before heading to the Ceravolo’s fruit farm at Nairne. “I enjoy doing a bit of mowing in the orchard and looking at the trees; it’s what keeps me going. I might not work as hard as I used to, but I still put in 10 to 14 hours,” says Ralph, who finishes his day by about 4pm.

Ralph’s remarkable work ethic was instilled at a young age. It was shortly after WWII when Ralph, 10, left Calabria for Australia with little more than a suitcase — not even a word of English. His mother and his four siblings took the month-long voyage to meet up with his father Antonio, who was working on an orchard at Uraidla. “We came out straight after the war; they were pretty tough days in Italy,” Ralph says.

Ralph’s parents bought farmland at Uraidla and at the age of 13 he left school and started working to help put food on the table. At 16, Ralph got a job cleaning at the former East End Market. After market each morning he would be back at Uraidla, helping his parents establish their vegetable farm. “We had to support and feed ourselves whichever way we could. In those days we didn’t get the dole, health support or anything,” Ralph says.

The Ceravolos then began selling their veggies at the East End Markets. “It was completely different back then, there weren’t any forklifts and it was all done by hand. There were a lot of Italians and Greeks in the market,” Ralph says. It was hard labour and Ralph would work long days between the market and the farm.

Ralph planted fruit trees in the 1980s, transitioning the business from vegetables to fruit. His eldest son Tony left school at 15 to work on the farm. “Mum reckons I was born with the steering wheel of the tractor in my hand,” Tony says. “I was always very passionate about the land.”

Now, Ceravolo Orchards runs 300 hectares of farmland from the Hills to the Fleurieu Peninsula. It also operates Ashton Valley Fresh, which produces 10 million litres of juice each year, with Ralph’s grandchildren at the helm of that business. Tony’s daughter Joyce was recently recognised as one of South Australia’s top young businesspeople in the InDaily 40 Under 40 Awards.

Tony inherited Ralph’s work ethic and gets up at between 1am and 3am each day for market. With 100 customers, it’s a rush once the selling starts. “I like the buzz and the adrenaline of selling,” Tony says. “I’ve been doing it for 30-odd years and every day that I get up there’s something different. I’ve also grown up with haggling — it’s just part of life for me.”

Even though he’s the boss, Tony is still in the trenches — driving forklifts and running the Ceravolo store. “We do have fun with each other in the morning and the time flies. If you work together as a family you can achieve a lot.”

The apple doesn’t fall far
Each morning, provedore Mark Brougham walks the market casting his eye over the vast amount of fruit and veg on offer. He and son Nathan operate M&C Fruit and Veg Supplies, buying produce for hotels, restaurants, cafes and nursing homes. The Broughams make sure to inspect the produce coming into their storeroom, before the produce is trucked out across wider Adelaide.

Nathan is the fourth generation of his family working in the industry. He started at the SA Produce Market straight out of school, just as his father Mark did at the East End. Mark’s father and grandfather made their livings from the market as far back as 1945. “I worked with my dad, and I enjoyed being able to go to work with him,” Mark says. “Now Nathan and I have the same thing. We bounce off each other and work well together — that’s a bit of a joy,” Mark says.

For pocket money in his school holidays, Mark would mend the lids of wooden fruit and veg crates for his father. He fondly remembers the East End Markets: the crowd patiently waiting for the 6am siren to sound, announcing the beginning of the trading rush. People shook hands and bumped into each other as the market burst with activity — the energetic yelling and haggling of vendors, the clattering of hand trucks, produce being thrown down from trucks and wads of cash stashed in leather aprons. Everything was gone by 8am, even the cabbage leaves, and the market was returned to a car park. “There was nothing like it,” he says.

The old market wasn’t the prettiest place, it had some different smells about it, the roof leaked and there were puddles. “But it had so much history,” Mark says. “The things that happened back there you would never see nowadays.”

The industry outgrew the East End, which closed in 1988 to re-open at Pooraka, now known as the SA Produce Market. “Gone were the cobblestone floors, replaced by parking spaces — gone were the horses and carts, replaced by trucks, vans and forklifts to make trade faster and easier,” Mark says.

Where once the availability of produce was dictated by the seasons, now fruit and veg is sourced year-round, with an explosion of different varieties. “I’ve got an invoice from dad back in 1945 that says celery was not available,” Mark says. “Now we can get anything from anywhere.”

Winter is a tough time of year as the cold bites during those early hours, but the Broughams are always busy and assured a hot coffee or two as they walk the market.

Mark started his business in 1992 and today is the president of the South Australian Chamber of Fruit and Vegetables. He speaks passionately about his industry and the people in it. “I’ve been in the markets 39-odd years and I love the atmosphere, the characters and the market itself — there’s no other place like it. The bartering and buying is the fun stuff,” Mark says.

Deep-rooted history
The South Australian Produce Market is a place where deals are done with a handshake at 5am in the morning. It’s where your word is stronger than any contract and your name carries your reputation. Profit margins can be slim, so haggling is commonplace, but so are the friendships.

“It teaches you a lot about human relationships; you’ve got to be good to the customer otherwise he won’t come back the next day,” says Ken Cobbledick. The Cobbledick name is synonymous with the markets. Ken is a fifth-generation vegetable grower, who has been coming to market since he left school at 16 to work in the family business. “I’m one of those market lovers. I can’t stay away from the place,” Ken says.

The Cobbledicks started farming at Uraidla 165 years ago, planting their roots not long after South Australia was founded. The family’s roadside produce stall can still be spotted near their farm on Swamp Road.

Ken helps his son Richard run Cobbledick Produce, specialising in red and savoy cabbage, cauliflower, celeriac, leeks, lettuce and Chinese cabbage. Each morning they set up in the SA Produce Market growers shed, unloading pallets of veggies ready for the morning’s trade. At 72 years of age, Ken has reduced his workload to three days a week. “I’m up at half-past two on those mornings to go and assist wherever possible,” he says. “I cherish the fact that I still get out of bed and keep going.”

Ken worked at the East End for 16 years before the markets transitioned to Pooraka. “I was a great lover of the old East End. It had a true market atmosphere of its own,” says Ken, who would sell two truckloads of produce, by hand, every morning. “There would be a truck with one-metre-high sideboards and it’d be nothing for me to throw up two-thousand cauliflower, red cabbage and savoy cabbage to my father.”

At the market today there are 280 registered forklifts zipping around and up to 2200 people on site during peak times. More than 250,000 tonnes of fresh produce is traded between wholesalers, growers and hundreds of retail operators each year. The dress code is high-vis, and if you’re caught without a reflective vest you’ll be quickly equipped with one. The market also donates 1.2 million kilograms of produce to Foodbank every year.

To help battle electricity costs, the facility has been equipped with a $10.5 million solar power system and battery that supplies power to the entire site. These days, margins are tight, but Ken and Richard’s family have withstood it all. “If you don’t grow something and at least get your money back, you’re falling behind the eight ball,” Ken says. “Things change and you just have to adapt.”

This story first appeared in the July 2019 issue of SALIFE Magazine.