A return to Clare Valley

After 26 years of living away, Hilary Mitchell has returned to the Clare Valley, embracing country life and all it has to offer – and that means inviting a group of close friends to her vineyard home for dinner. 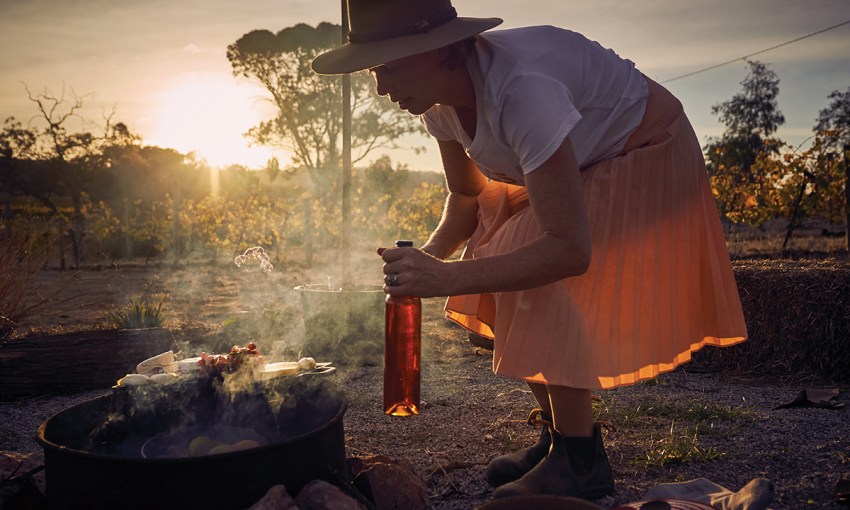 As her two-year-old daughter Margot kicks up the dirt in her red gumboots and corduroy dress, it’s clear that life has come full circle for Hilary Mitchell.

Hilary, 42, grew up on this Clare Valley property, surrounded by the vines of her family’s wine business, Mitchell Wines.

It was here Hilary remembers running amongst the grown-ups, just like Margot, when her parents were hosting dinner parties.

“Mum and Dad entertained so much,” she says. “They were always promoting Clare Valley by inviting wine writers, sommeliers and international buyers up to stay.

“I remember the smells around the house, the food, the wine and the atmosphere. I would do dance performances for everyone just to be around it all.

“Mum would cook these elaborate roasts; there was always lots of meat. She actually used to write down everything she cooked at dinner parties so she wouldn’t cook the same thing twice. She’s made them into a cookbook that she still has, 30 years later.”

There’s no meat on today’s menu, however, as Hilary and her husband Mark Mason, a tattoo artist, are strictly vegetarian. The main course of today’s feast includes orange and roasted fennel salad, caramelised onion and fig tart and, the star of the show, a whole pumpkin, cooked on the campfire, using a recipe from one of Hilary’s favourite cookbooks, My New Roots by Sarah Britton.

Today’s gathering has a rustic, earthy feel with the table set up outside, next to the vines, with splashes of colour added by mismatched vintage crockery and crocheted blankets on the back of chairs.

Most guests have brought their children, whom Hilary and Mark have accommodated, setting up a rug, hay bales and a hammock to create a kids’ zone, as well as hay bales around the campfire.

Some of the young boys, however, have created their own special area, building a fort with pillows and blankets nearby amongst the vines.

Guest Belinda Heinrich grew up in Clare and has been friends with Hilary since they met on the school bus in primary school.

Belinda moved back to Clare a couple of years ago with her partner, wine writer Nick Ryan, and children Maggie, 12, Wilbur,
5, and Polly, 2.

Belinda, Hilary and all of the women here today get together regularly as members of the Country Women’s Association (CWA).

No longer just the domain of older ladies and morning teas, the CWA has undergone a transformation in the past few years, thanks to the influx of younger members. These days, it’s a vibrant, sociable organisation connecting women of all ages in regional areas. Hilary says it’s also a great way of giving back to the local community.

“I was at a local playground with my kids and I realised it had been renovated with funds from the local Sevenhill CWA,” she says.

“We were having so much fun and I thought, I need to get involved and help raise funds because this playground is awesome. So, I got into it through Belinda’s cousin, who was a member, but we also see it as a good excuse to catch up with the girls and have a glass of wine and raise money for good causes.”

The Sevenhill CWA meeting is held at the Sevenhill Hotel, an award-winning pub run by guests at today’s gathering Kate Shadiac and Paul Longbottom. Paul managed the Alma Hotel in Norwood before he and Kate opted for a tree change with their young family, son Oscar and daughter Molly.

As the sun shines through the vines and chilled music plays from the verandah, the air is filled with the smell of fire-roasted vegetables as guests tuck into the hearty country fare.

This is a group of friends who share the experience of having left the city behind to embrace country life. Sitting here with close friends, her husband and young children, Hilary admits she had no plans to end up back in Clare when she set off for boarding school at the age of 15.

“I never wanted to be involved in the wine industry,” she says. “I saw how hard my parents worked. I was a kid, I didn’t drink; I didn’t get it. I wanted to be an artist, a writer, a painter.”

Hilary studied visual arts before heading to Barcelona to specialise in illustration. She has also learnt languages along the way and is fluent in Spanish, French and Catalan.

She and Mark, who met when they both worked in Adelaide nightclubs, lived in Barcelona for more than 10 years and it was there Hilary immersed herself in the world of fashion. She did night classes in pattern making and ended up as an apprentice with Spanish luxury brand Desigual.

“I was part of the capsule collections that we made with Christian Lacroix, José Castro, Sophia Kokosalaki and Cirque du Soleil,” she says.

“I think I was chosen mostly because I could speak French with Christian Lacroix and English with Sophia Kokosalaki. I was also a finalist in the 2010 Young Designers of Barcelona.”

The catwalks of Europe are a long way from winemaking in the Clare Valley, but it seems all roads have led this creative mum of two home to country South Australia.

It was while overseas that Hilary had the distinct feeling of being transported by a great bottle of wine for the first time. She was waiting for a friend and purchased a bottle of Mitchell cabernet sauvignon on impulse. It took her straight back to the dusty driveway of her childhood home with thoughts of her father.

It was Hilary’s father Andrew who also reinforced the idea of Hilary and Mark raising a family in Clare.

“When I found out I was pregnant, I had booked to accompany Dad through the Nordic wine shows. He was going to notice that I wasn’t drinking, so I had to spill the beans and tell him I was pregnant,” Hilary says.

“He then spent that week reminding me how lovely it was to grow up in Clare. When I arrived home in Barcelona, Dad ordered Jamie Goode’s winemaking book for me, and my husband looked at me and realised we were moving back to Australia.”

They landed back in Australia six years ago, just before Elliot was born. The couple lived between Adelaide, Barcelona and Clare before relocating to Clare permanently last year.

By the time Margot was born in 2019, Hilary had begun studying winemaking and began making wine with the family company. She joins three generations of grape growers and winemakers in her family, alongside her parents Andrew and Jane, and siblings Angus and Edwina.

Whether it’s food, fashion or winemaking, Hilary is a powerhouse of motivation and creative talent.

“I guess they are all creative,” she says of her passions. “I just love coming up with an idea and making it happen.”

Dessert arrives in the form of a warm cheese platter and chargrilled pears and figs, all done over the campfire, as talk turns to wine, of course, in this wine-savvy crowd.

Guests Skye and Mark Bollen own Sussex Squire wines in Clare and have brought a selection of their best reds to share. Skye has also brought her signature chocolate and berry slice, while Belinda has made an impressive Persian love cake.

“Hilary always does such a great job when it comes to dinner parties,” Belinda says. “I’d describe her style as soulful, earthy, whimsical and self-assured. She’s amazing.”

Mark and Hilary work well as a team, clearing away dishes while the other adults keep an eye on the kids as they toast marshmallows by the fire.

Hilary says Mark, too, has an artistic flair, creating his hand-drawn tattoos in Barcelona and now here in Adelaide, working out of XO L’Avant at the Mill in the city. He is also charged with making the family meal most evenings.

“He has to make about four variations because we all eat different things, but he’s very good at juggling it all,” Hilary says.

“Mark says he’s inspired by the worker’s lunches in Spain when you have rice, beans and eggs, but it is always the delicious family secret recipe.

“It helps that Mum and Dad are just around the corner, so we go and pick things from their veggie garden, we get a lot of fresh produce and lots of eggs from their chickens. They are our staples.”

As the dinner party wraps up and parents take tired children home to bed, a couple of guests linger, relaxing with their gracious hosts to watch the sunset through the vines.

“I thought I’d turned into a city kid, but I love it here, the land, the space and the garden,” Hilary says.

“The children love climbing the trees and running around and getting dirty and covered in mud. Cooking for me is about the table, the music and the sunlight, the whole idea of entertaining and being with friends and family. That’s what’s I love.”

This story first appeared in the June 2021 issue of SALIFE magazine.