Dining to die for

Whether you’re an insatiable foodie or just looking for an experience to share with that special someone, degustation dining is the ultimate gastronomic adventure.

The wine cellar at Magill Estate Restaurant is the envy of restaurants Australia-wide, with bottles dating back to the creation of the first experimental Grange in 1951.

Executive chef Scott Huggins says the cellar is a major asset and is used to full advantage to complement the restaurant’s tasting menu. “We’ve got the most incredible depth of age in our cellars, there are not too many restaurants around the world, definitely not in Australia, that can match wines with the complexity, depth and age that we have,” Scott says. “We can open wines from the ‘60s, ‘70s and ‘80s with no trouble at all.”

The tasting menu, for dinner Thursday to Saturday, is $210 for a seven-course degustation, with diners given a choice of two meals for every course. The menu used to be one set course, but Scott added a second to give diners more options.

With the restaurant situated adjacent the famous estate vineyard and winery, the most decadent wine-matching option is the Icon and Luxury wine match for an additional $260 per person, then there’s the Sommelier’s Choice for $125 per person. “Many of the major restaurants around the world offer a tasting menu, it’s an experience more than a meal,” Scott says.

For the first course, crab warmed in Konbu, chefs pick the crabs live from the on-site tank at about 5pm, one hour before service. “What I learnt in Japan is that within two hours the meat is at its sweetest,” Scott says. “It will take five chefs one hour to clean, pick and cook the crabs — that’s essentially five hours’ worth of work for one dish.” The preparation includes the use of liquid nitrogen, so the hot crab is accompanied by an element that is smoking when it arrives. 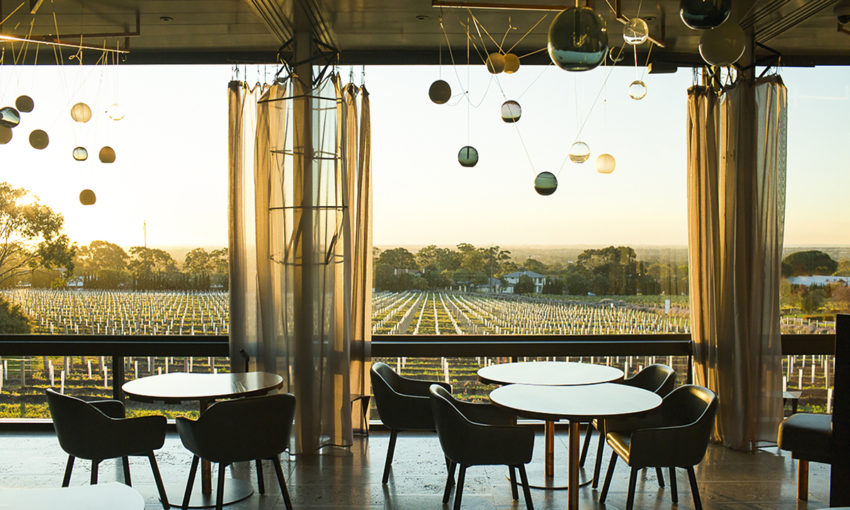 Depending on the menu, the tank can hold live abalone, lobsters or prawns, so seafood is at its freshest. Scott also sources produce direct from growers and farmers, such as Mayura Station in the South East, and Scoop at McLaren Vale.

“My wife and I have just bought a pristine seven-acre property at Piccadilly, and the next project for us is to start growing a massive kitchen garden out there,” Scott says.

Unlike the chaotic kitchens depicted in reality television, a successful fine dining restaurant such as Magill Estate is clean, organised and structured. “A lot of process and organisation goes on during the day so that service runs smoothly,” Scott says.

The chef keeps the menu fresh, often changing dishes to match the seasons. But when he finds a particularly successful dish, such as the crab, it’s extremely hard to replace it. “If people still love it and it’s still a great thing, it’s very hard to retire it.”

LONG LUNCH IS A MOUTHFUL

If the words D’Arenberg and degustation aren’t enough of a tongue-twister, the name of The Cube restaurant’s 12-course menu is even more of a mouthful.

The Sisypheanic Euphoria Long Menu is a culinary adventure through 12 dishes that are designed to arouse a childlike sense of amusement over two-to-four hours in The Cube restaurant. The experience will set you back $210, with a choice of paired d’Arenberg wines for $95, or $190 for the international wine offerings.

D’Arenberg head chef Brendan Wessels says degustation dining is a special experience, which requires a kitchen team to be at the top of their game. “For us, it’s a craft,” Brendan says. “What our team do is special and right at the tip of the spear. It requires that focus, dedication, passion and commitment.

“Our entire focus is being able to touch each guest, and if we achieve that we walk away happy. We love hosting newcomers to degustation dining, because if we get it right and we’re able to seal that day, we can change their perception of food forever.”

The kitchen is situated two floors below the 50-seat restaurant and is a fast-moving operation when in full flight. The dishes are sent via a dumb waiter to level three, where there is a finishing kitchen at the back of the restaurant. “The level three restaurant has beautiful panoramic views of the McLaren Vale region. But it means we must use a complex communication and service system,” Brendan says.

The menu is named after the winery’s Sisypheanic Euphoria Shiraz. The name refers to the euphoria involved in one’s labour of passion. “It’s laborious, time-consuming and challenging, but you absolutely love what you do every day,” Brendan says. “We love what we do and we let that translate across to the menu.”

The eclectic, colourful dishes match the restaurant decor, all influenced by Chester Osborne’s creative energy. “Chester’s an absolute foodie and gastronome, so he understands the level of enjoyment and pleasure that comes with that,” Brendan says. “We try to emulate Chester’s energy in the restaurant.”

Brendan’s partner Lindsay Durr is the kitchen’s head of research and development, constantly working on new creations. Dishes are intricately constructed, even using a 3D printer. “The dishes that make it onto the menu have got to blow us away.
We’re the most ardent critics of our own food.”

Brendan asks guests to trust his chefs. They deliberately do not publish their menu online to prevent diners from developing ideas about what the dishes should look and taste like.

“If we can show diners how to have fun, how to engage themselves with food and just appreciate the craft behind it without that ostentatious atmosphere, that’s an absolute win. It means we can spark an interest that will hopefully remain with them for life.”

The restaurant’s most high-end experience is The Chef’s Table, which allows up to six guests to dine right amongst the action of the kitchen. Brendan enjoys having some banter with the guests, encouraging them to get involved and look around behind the scenes. “It’s a very immersive experience, which is great fun for us as well,” he says.

Growing up in South Korea with his chef mother, Jin Choi has fond memories of assisting her in the home kitchen before going on to forge his career in the art of cooking. Now head chef at Hardy’s Verandah Restaurant, Jin brings his childhood experiences and love of food to the degustation menu, while helping guests connect with some of their own memories.

“I really love food — it brings me happiness and I want to share that joy with others,” Jin says. The iconic restaurant’s Full Story Menu is a seven-course degustation, which Jin personally designed after he was appointed head chef less than two years ago. Situated at the refined Mount Lofty House, boasting the best views of any Adelaide dining spot, the opulent restaurant is popular for special occasions, such as wedding anniversaries and birthdays.

“The Adelaide Hills really inspire me — it can be the weather, the trees, the different colours and smells — I try to incorporate that atmosphere into my menu,” Jin says. “I don’t follow any rules, so whatever I really like and have a good memory of, I will put on the menu.”

The three-hat restaurant is one of Adelaide’s top fine dining spots, and Jin encourages newcomers to try the degustation menu. While the a la carte menu is of equal quality and decadence, the seven-course menu gives an opportunity for a wider culinary experience in one sitting.

Having worked at high-end restaurants such as The Bridge Room in Sydney, Jin has brought his fine dining experience to Mount Lofty. But he also incorporates memories from South Korea, with an element or two of his mother’s occasionally making it onto the menu. “My mum made Korean food for special occasions, so when people come into the restaurant for an anniversary or birthday, I want to share that experience that my mum gave me,” he says.

During preparation, Jin runs his kitchen like a “playground” with the chefs chatting and having fun. But once it hits 6pm and service starts, it’s a different story as game faces are on, and there is no discussion, just concentration — all part of the fine dining experience.

The chef’s love of South Australia translates to the menu, with protein, vegetables and wine sourced across the state. The current menu includes crab, Ora king salmon, quail and Waygu beef. Available Thursday to Sunday, The Full Story Menu is $179 per person, and $120 for a wine matching service provided by a sommelier.

The current menu finishes with a decadent dark chocolate dessert, but has previously featured candy floss, which would arouse smiles when it arrived on the table. “I love to see people react with surprise and excitement when their food comes out,” Jin says.

This story first appeared in the September 2019 issue of SALIFE magazine.

Mad March is here and we have you covered! From Fringe to WOMAD to the Adelaide Cup, you won’t be struggling to find things to do this long weekend.

Out & About: In Conversation With…