Fresh on the block

Among the many new restaurants that opened in South Australia in the past year or so, a few have stood out head and shoulders above the rest for food writer Nigel Hopkins. 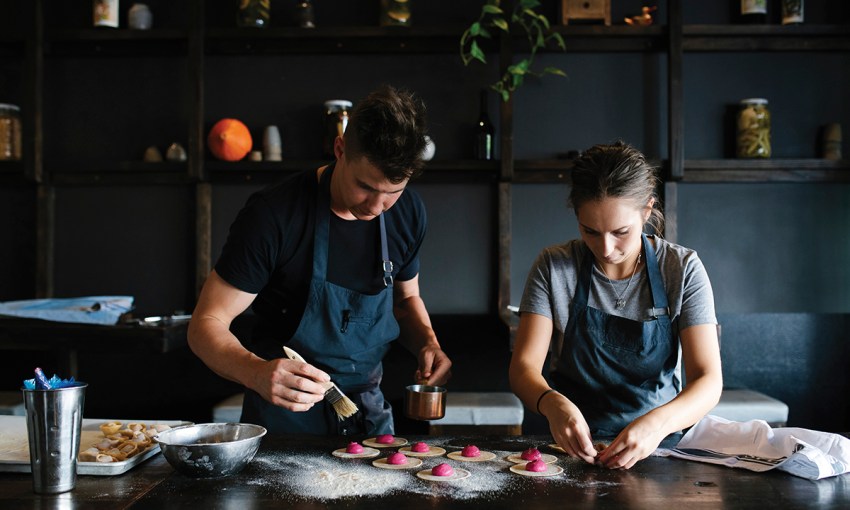 Orso has been Adelaide’s most exciting, and probably most expensive, restaurant opening in 2019. It was two years in the making for chef-restaurateur Andre Ursini, whose Andre’s Cucina & Polenta Bar has long been a city favourite. With head chef Will Doak overseeing the spectacular open kitchen, this menu treads new ground with the wood grill and Josper oven providing much culinary fire. Start with drinks and snacks in the neighbouring Willmotts Gastronomia, a cafe-bar adjoining the restaurant, then order crunchy croquettes filled with creamy potato and taleggio before moving on to smaller dishes such as chargrilled octopus in nduja sauce with braised chickpeas, and then see what the Josper oven does with whole flounder or waygu rump. If fennel granita and lemon cream foam over ricotta parfait is on the list then order it.

Given its close relationship with crowd-pleasing favourites Ruby Red Flamingo and Tony Tomatoes, you’d expect Coccobello to follow the same reliable and trusted path. It does, but also with a menu of all-time favourite Italian dishes cooked just like mamma used to make. Sprawling through several rooms, despite contemporary styling Coccobello feels very Italian from its amiable and competent floor staff to classic dishes such as veal and prosciutto tortellini in brodo, whose simple appearance disguises its fabulous flavours. And of course, there’s a long list of pizzas from a monster-sized oven and all the pasta is house-made.

It comes from the same stable as Ruby Red Flamingo and others in Walter Ventura’s sprawling empire, but l’Italy is very different. Nothing traditional here, no nonna’s favourites, instead a far more sophisticated offering that wouldn’t be out of place in Rome or Milan, even Melbourne, with its tradition of very smart Italian-inspired restaurants. Chef Joe Carey’s cooking is clearly influenced by his two years at acclaimed regional restaurant Brae in Victoria, and is focused on smaller dishes such as caramelised crisp pig’s ears with chilli and grilled radicchio or whole deboned garfish with sweet and sour onion and hazelnuts. Only two pasta dishes; no pizza. Co-owner and manager Riccardo Puccio makes it as close to a Roman experience as possible. 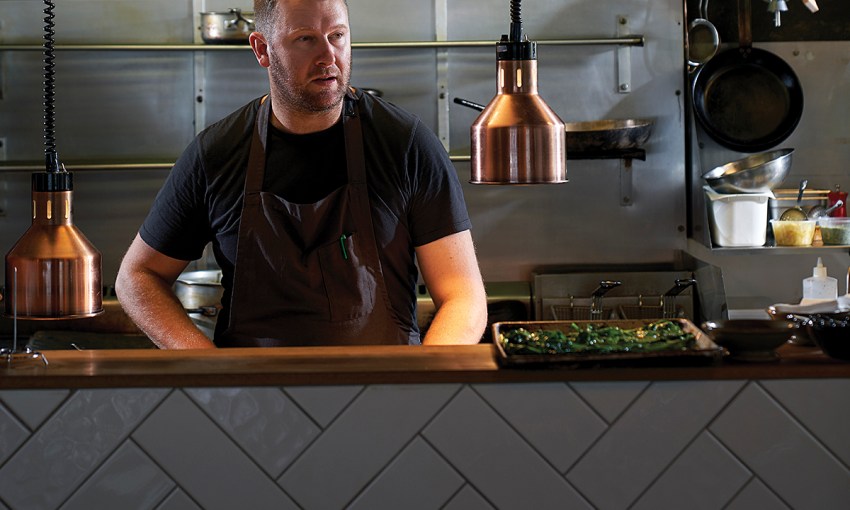 It’s never easy giving an old restaurant new life, but the team that has taken over the former Panacea and lifted it to new levels as Herringbone under chef Quentin Whittle has done exceptionally well. Whittle’s no-nonsense, big-flavoured dishes draw on a wide range of influences from the Mediterranean to Asia, and his experience is such that every dish not only looks delicious but shows maximum flavour development. Look for dishes such as his bollito misto terrine with mustard fruits and salsa verde or slow roasted lamb shoulder with baba ghanoush and fried chillies. An earlier dish that stood out was pan-seared kingfish sitting on carrot and miso sauce with toasted fennel. 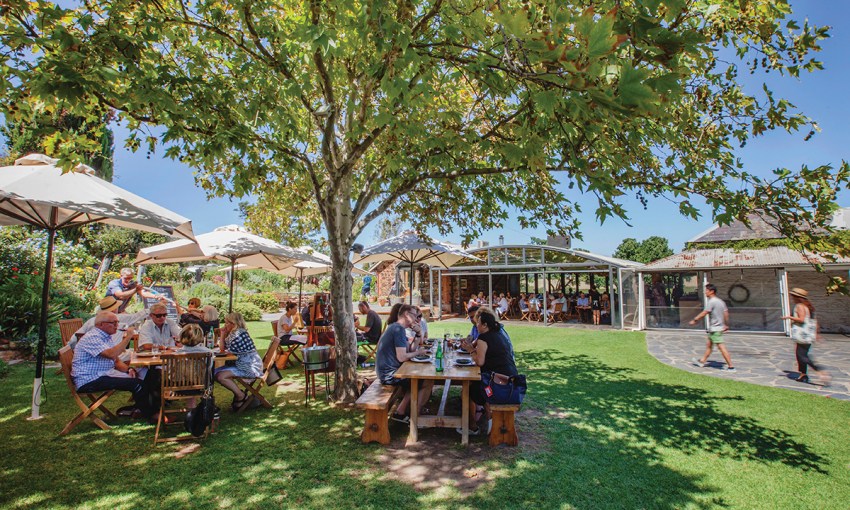 Coriole winery has long had an ever-evolving restaurant, along with an impressive range of new varietal wines, but now it’s been lifted with the arrival of chef Tom Tilbury, who has moved his Gather Food and Wine operation from Robe to Gather at Coriole. Tilbury’s a la carte and tasting menus are focused on local sustainable produce and provide a comprehensive insight into the flavours of the McLaren Vale region. An early standout dish was a tartare of finely chopped kangaroo with quandong, saltbush and damper, while more current dishes include mulloway with shaved fennel salad, lemon cream and crayfish oil, or cider vinegar glazed chicken with parsnip and grilled grapes.

The fact that Lot 100, hidden in the backblocks of the Adelaide Hills, can attract a weekend crowd of hundreds is proof it must have a lot going for it. That’s partly because it’s also the cellar door for a collaborative group that includes  Mismatched Brewing, Adelaide Hills Distillery, Hills Cider Company, Ashton Valley Fresh and Vinterloper wines, so there’s plenty to drink. But the kitchen, fronting a vast, barnlike dining room and terrace, has pizza master Tom Bugner and ex-Orana head chef Shannon Fleming in charge, and that’s almost as big an attraction. There are good pizzas and platters, of course, but the menu might be more tempting with dishes such as roast pork belly with romesco sauce and cavolo nero or baked gnocchi with melted fontina cheese.

It’s unlikely anyone has ever written an ode to the steak sandwich, but if they did they’d have to check out the one offered at The Den, which is not surprising given it comes from the kitchen of head chef Bethany Finn, whose neighbouring upmarket Mayflower restaurant at the Mayfair Hotel focuses on classic European cooking. The Den, although it picks up the glamorous art deco styling of the surrounding hotel, is a more casual dining space featuring dishes such as confit duck leg with peas and crisp speck in a Dijon mustard sauce. The steak sandwich, though, is a marvel of sliced steak with onion rings and cheese in a plaited brioche bun with shoestring fries and a peppercorn sauceboat on the side.

Bai Long Store has been open for a while now, but its low-key presence on Hutt Street means it may not have appeared on as many radars as it should have. It’s a very modern style of Asian restaurant, whose name means “white dragon” and whose minimalist design is an elaborate metaphor for the various elements of this invisible creature. Head chef Jae Hyun-Park (ex-Bistro K, Nobu) offers an inspired modern Asian mix of Korean, Japanese and Chinese influenced dishes that cover a lot of territory, both geographically and stylistically. Beautifully balanced small dishes such as kingfish sashimi with truffle soy and wasabi puree, or beef tenderloin tataki with quail egg and wasabi mayo lead the way, with larger dishes such as a very homely mapo chicken with soy egg custard. The drinks list includes teas sourced exclusively from a Taiwanese tea master.

Nido hit the ground running and it deserved to. After many years The Pot’s magic had finally faded but owner and serial restaurateur Simon Kardachi waved his magic wand and brought in last year’s Australian young Chef of the Year Max Sharrad, who drew on his family’s Friuli Venezia Giulia background to deliver a menu of brilliantly tweaked Italian classics such as rootello bonito, a take on vitello tonnato made to order with freshly chopped kangaroo, bonito flakes in kewpie mayonnaise and shaved, cured egg yolk, or squid ink cavotelli poached in “crazy water” with local pipis and Coorong mulloway. Finish with a crunchy sfoglietelle with a tiramisu filling. 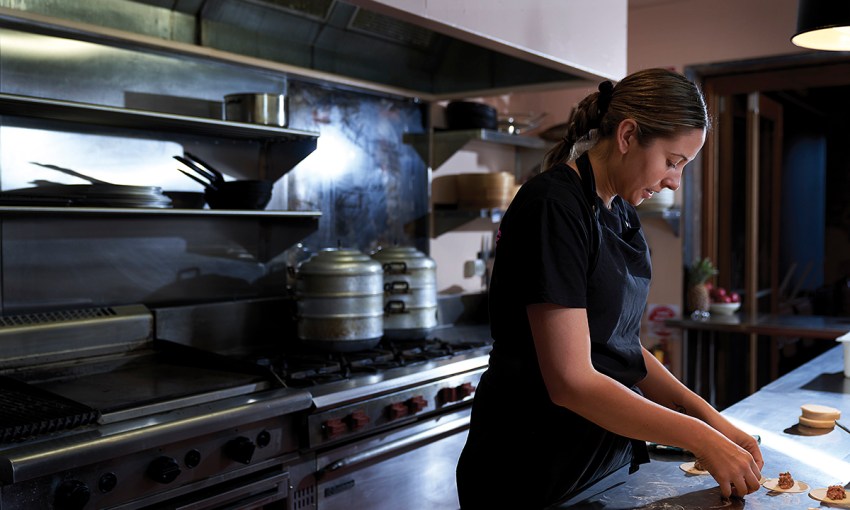 Some people say “follow your bank manager” when they move, others might follow the chef, and with Emma McCaskill it’s certainly worth following her to Sparkke at the dramatically reshaped Whitmore Hotel. Apart from the attraction of having its own inhouse brewery, the all-female-led 180-year-old pub now has a thoroughly modern brewpub menu without a parmi in sight. McCaskill has segued seamlessly from fine dining to dishes such as deep-fried drunken chicken with her grandmother’s favourite chunky cucumber and watermelon radish salad, or pork and ginger dumplings in chicken bone broth. There’s still a cheeseburger to keep traditionalists happy.

This article first appeared in the SALIFE Food & Wine List 2019.